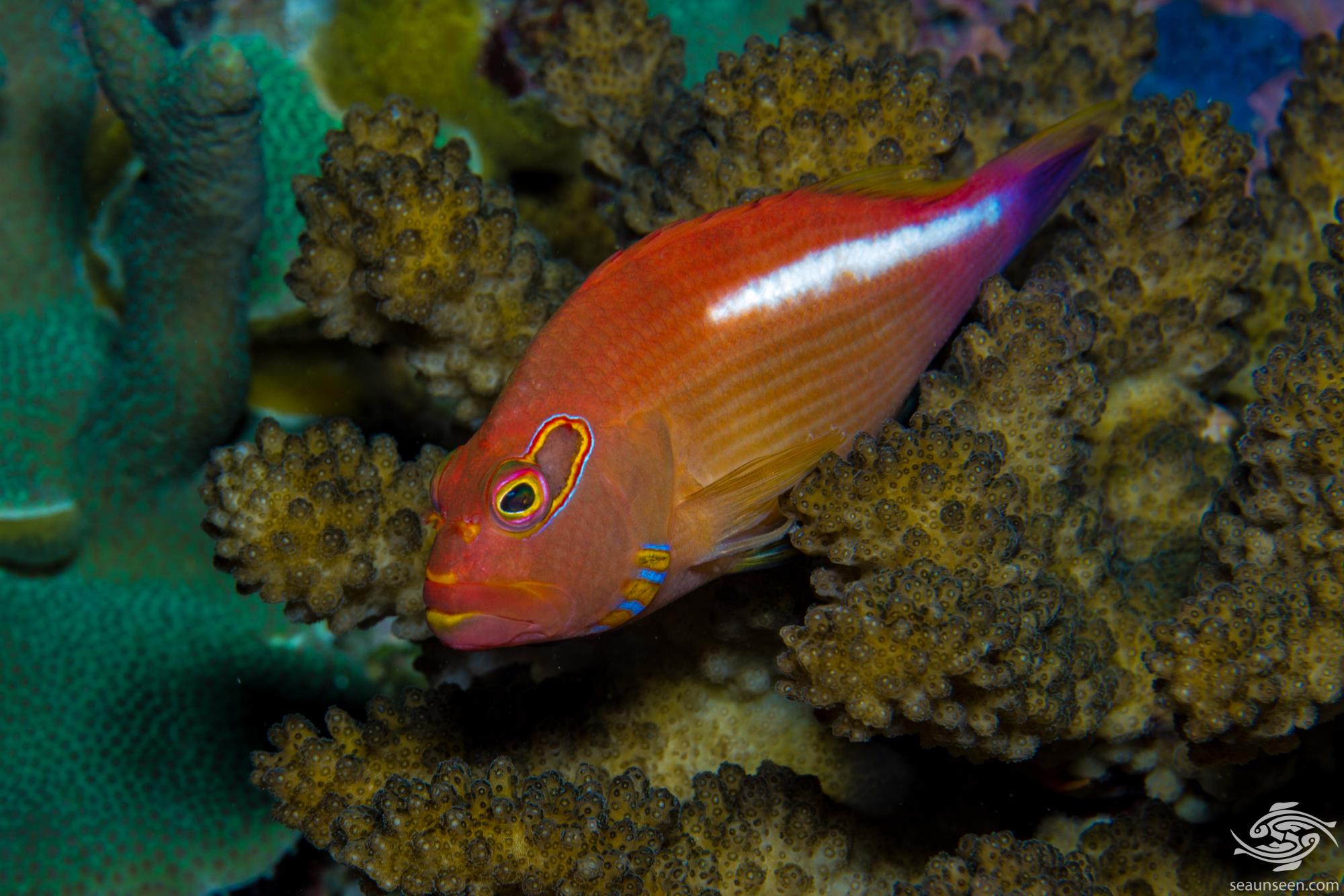 The Arc-eye hawkfish (Paracirrhites arcatus) is also known as the Horseshoe Hawkfish, the Ring-eye Hawkfish and the Whiteline Hawkfish. Hawkfish, are named for their behaviour of perching themselves in strategic raised locations on the reef. From there they view their territory and pounce down at a surprising speed on unsuspecting prey, just as a  hawk would.

Hawkfish do not have swim bladders, which although it means they have to swim to stop themselves from sinking, allows them to make these rapid darts to catch prey. Fish with swim bladders would be at a disadvantage in such a situation as they would have to adjust the pressure.

When a hawkfish sees a diver approaching they will often freeze in this position, probably in hopes they aren’t seen. The name, arc eye, or arcatus, meaning “arched”, refers to the bright orange marking around the eyes. 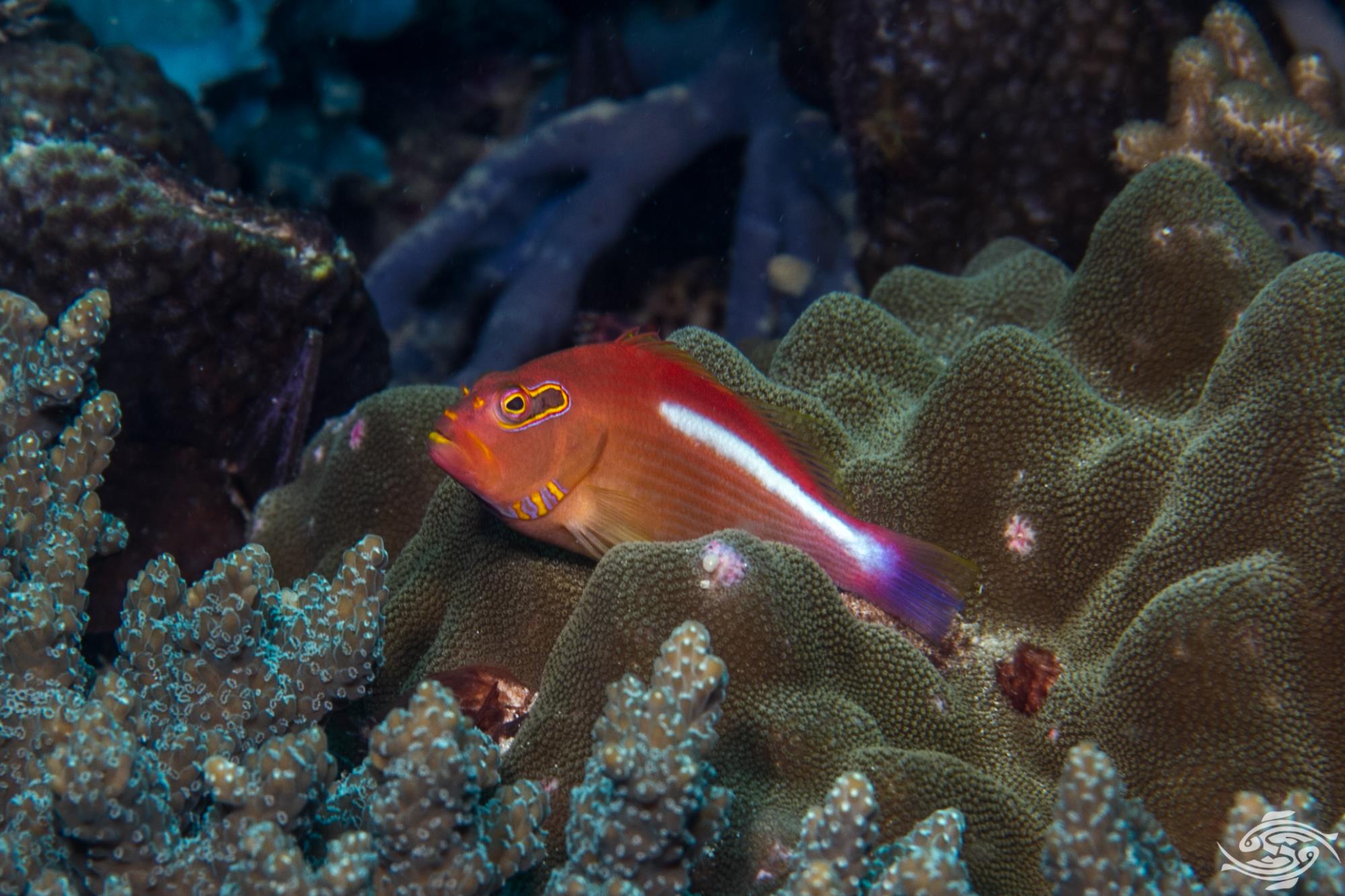 APPEARANCE
The body of an arc-eye hawkfish may be greenish-brown, dark brown or reddish-orange with a broad, longitudinal white band along the distal half of the body. The tail is a blueish color. They have large heads with somewhat elongated bodies and the dorsal fins are merged. They have a distinctive orange arched marking around and behind the eye.

The tails are rounded and truncated. Their pectoral fins are large and scale less. Because the pectorals are large and skinless they are able to perch on corals which would sting most other fish. This gives them a measure of protection.

Arc-eye hawkfish grow up to 20 centimeters but are seldom seen this size. They are always usually solitary and will defend their territory against others of their species. Only in the mating season in spring are they seen in pairs or occasionally groups of three. 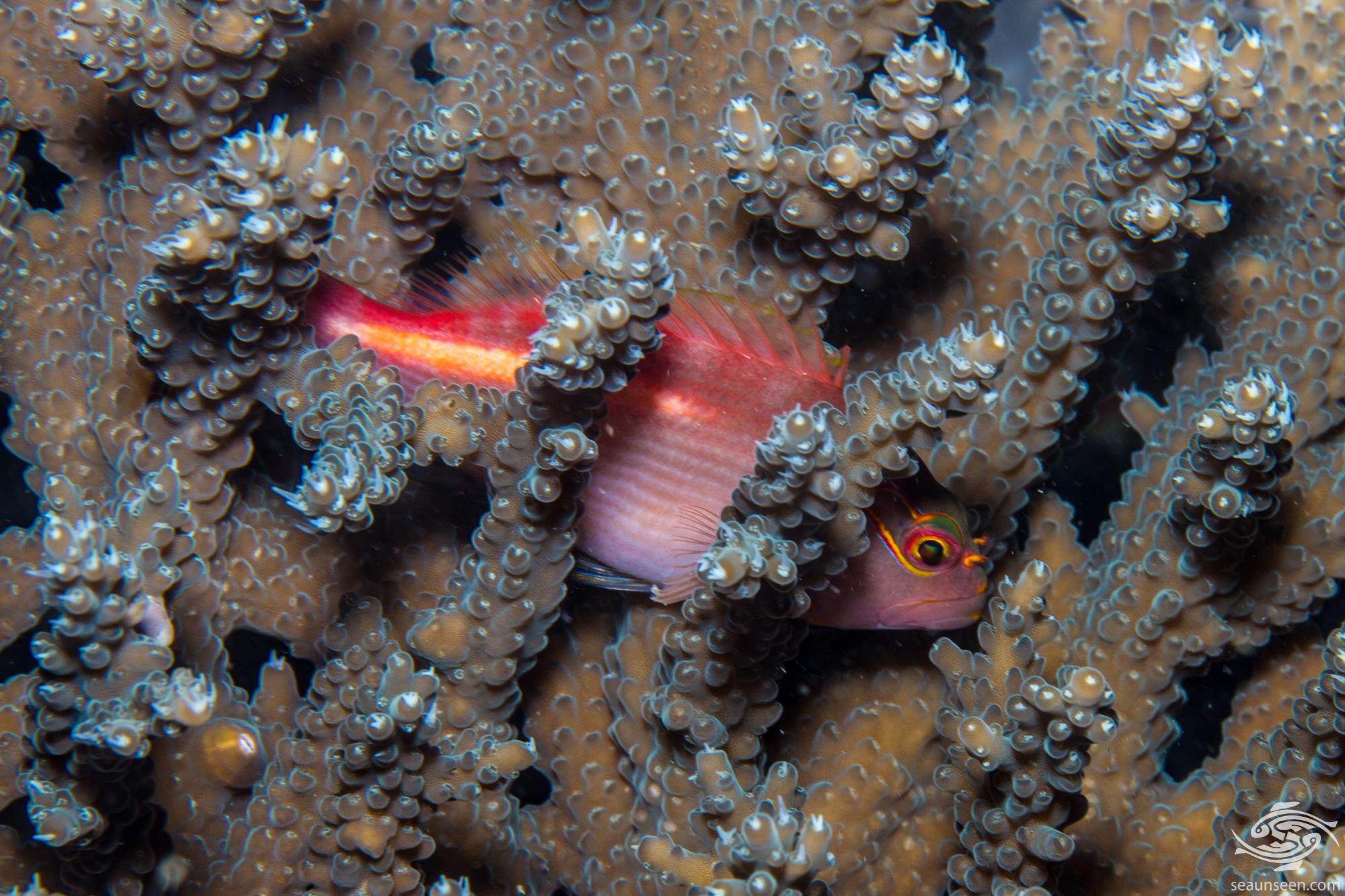 At night they can be seen hiding in between the branches  of Acropora corals which gives them a measure of protection. Some cuttlefish and squid can however use their tentacles to pull them out of the branches. 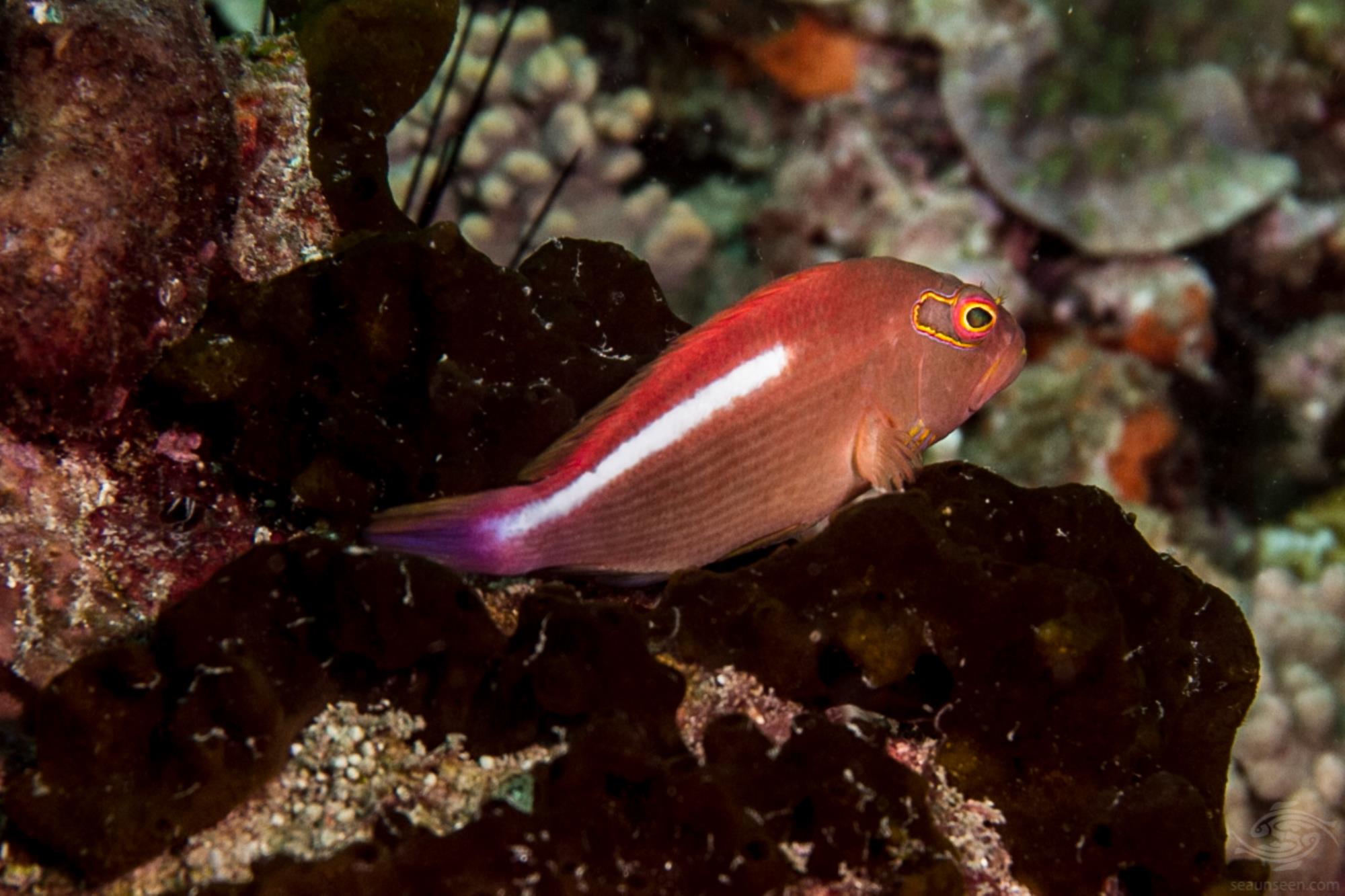 Arc-eye hawkfish are found across the Indo Pacific area, mainly on coral reefs at a depth of 1 to 30 meters. 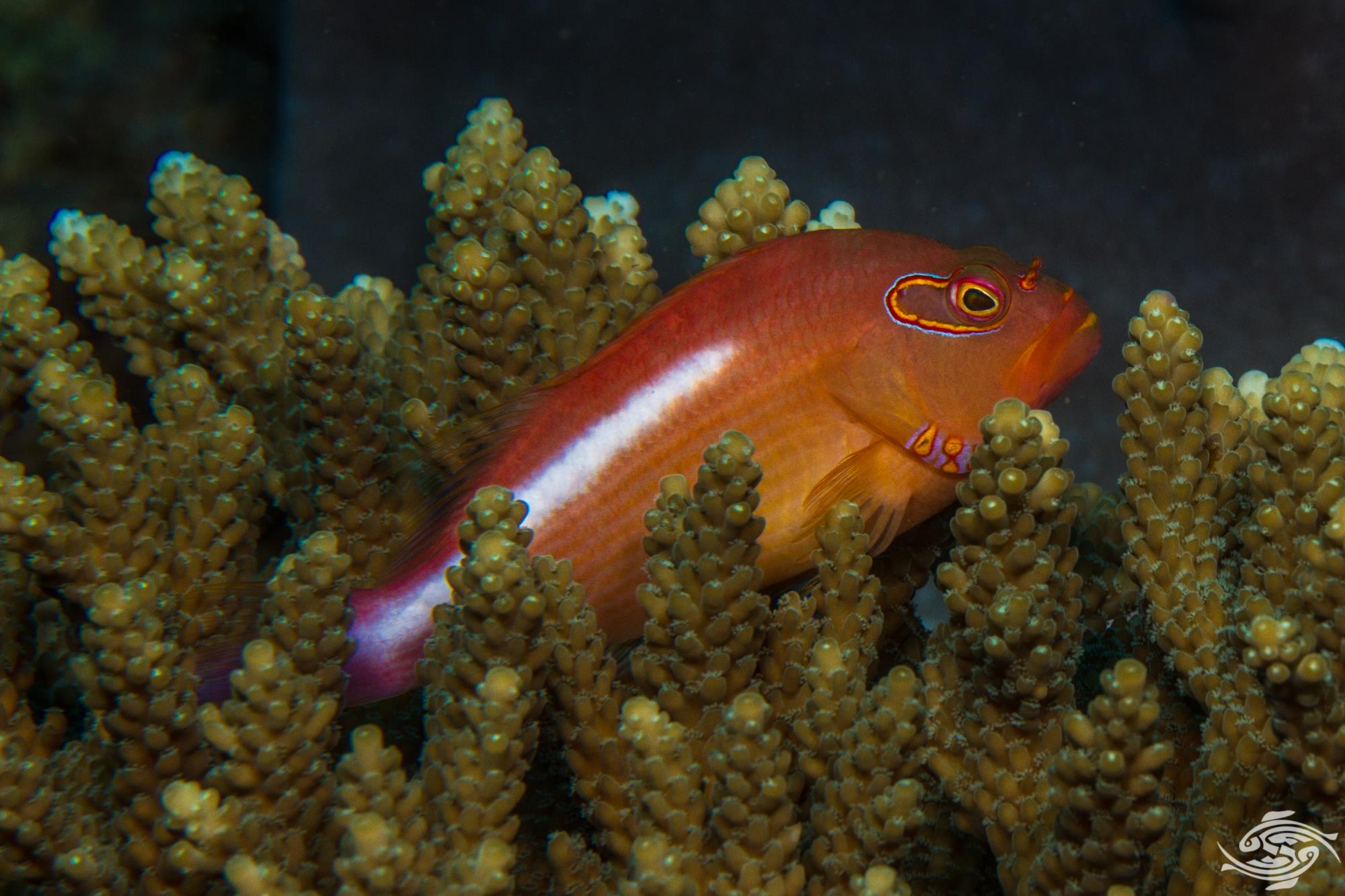 This fish is a predatory carnivore, as its name suggests. Its main diet consists of small fish and crustaceans such as shrimps and crabs. They also take larger planktonic organisms that pass them by. 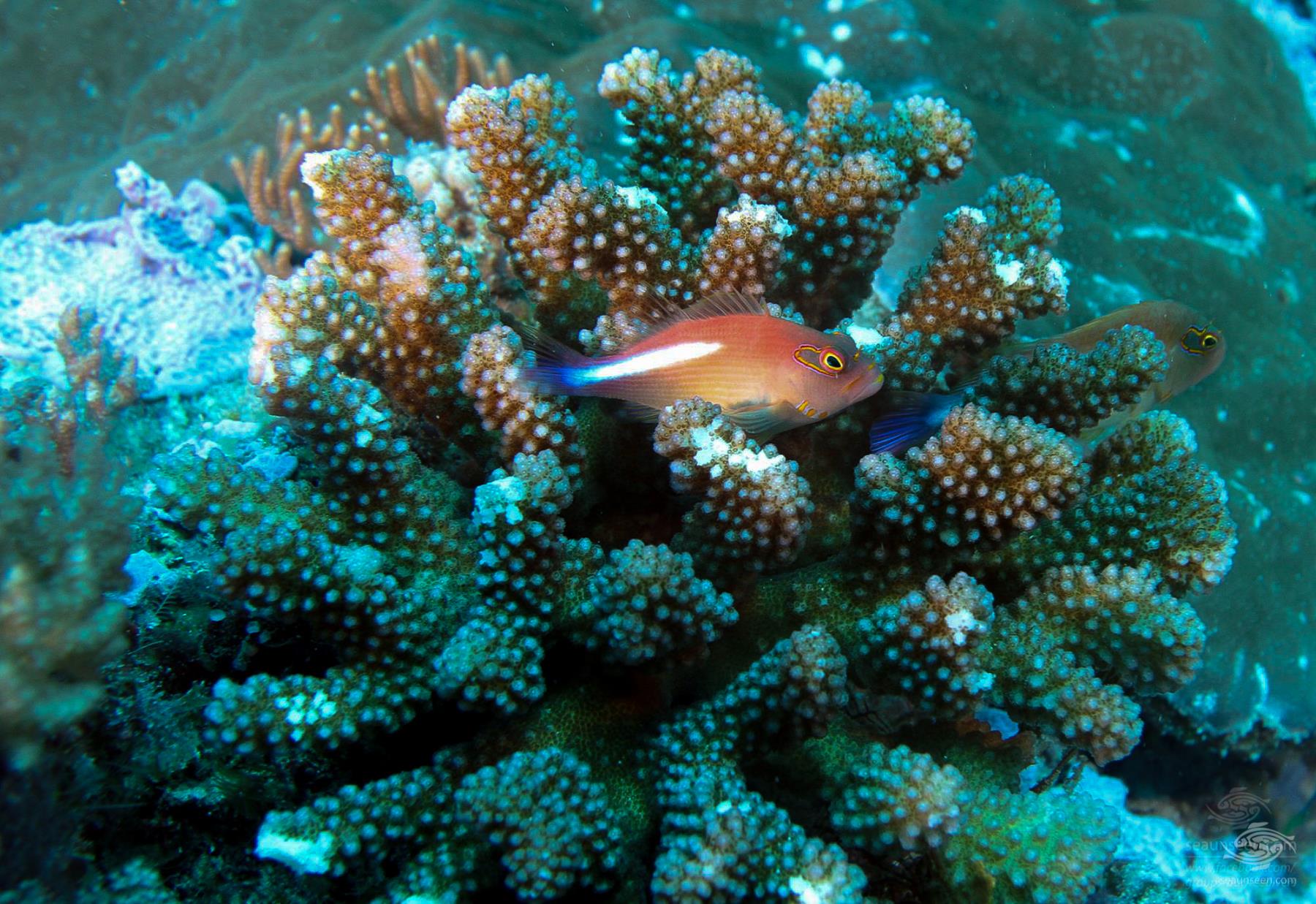 Arc-eye hawkfish are easy to keep in an aquarium, and therefore are ideal for beginners. These fish are highly territorial in aquariums so for a semi-aggressive to aggressive community of tankmates, it is best to introduce the hawkfish last. It may harass new additions, especially other hawk fish and fish that are much larger than itself.

The arc-eye hawkfish diet in an aquarium should include a variety of marine meats, frozen preparations, and live feeder shrimp. A pair may be kept in a tank but it should be a confirmed pair before they are put in a tank together.