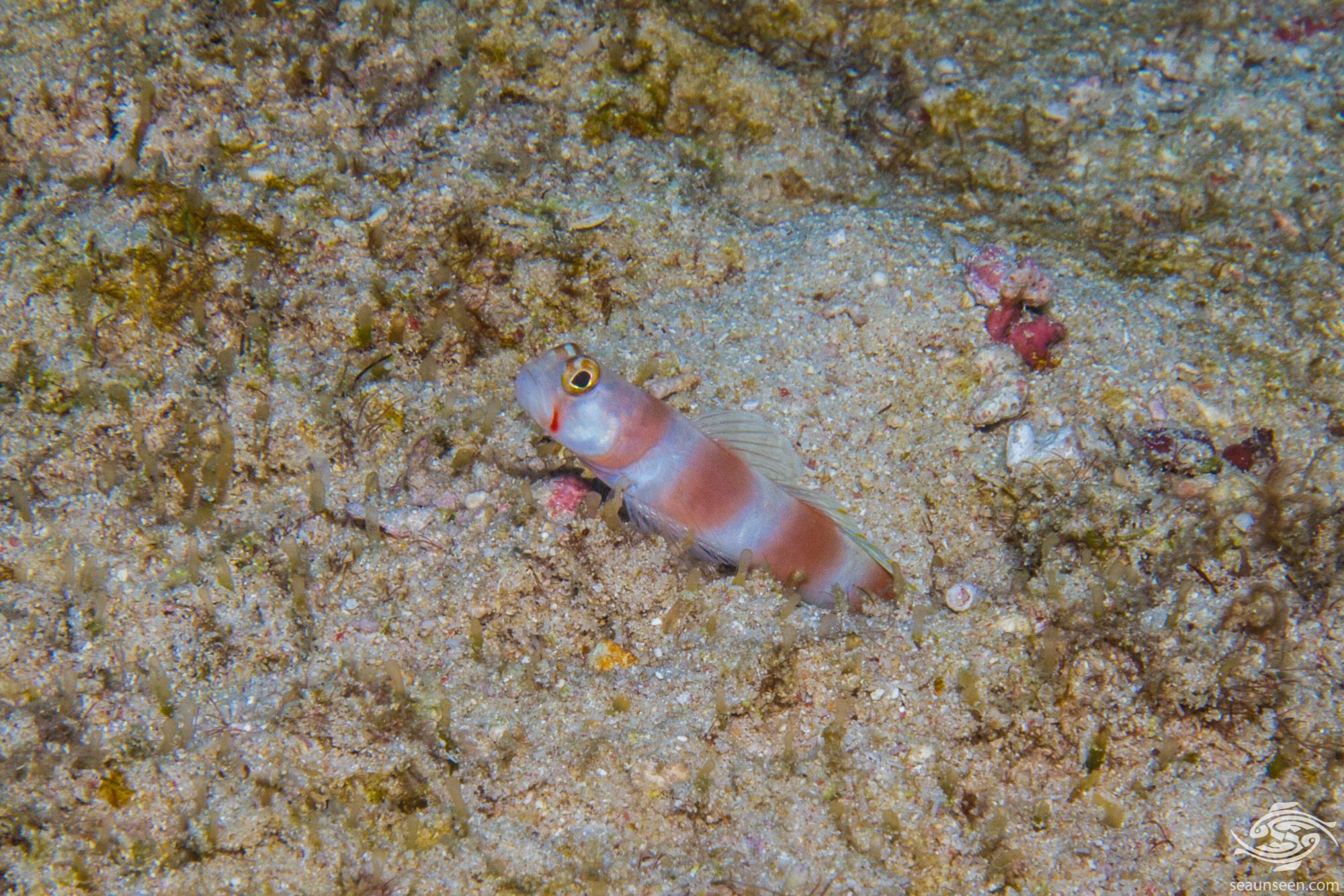 The Aurora Goby (Amblyeleotris aurora) is also known as the Aurora Shrimp Goby and the Pinkbar Goby. As their name implies they have a symbiotic relationship with a species of alpheid shrimp, Alpheus randalli. The shrimp constructs a burrow in the sand and both parties live in the burrow. The goby acts as a guard for the shrimp which has poor eye sight. Both species gain protection and more from this relationship making it a true symbiotic relationship. 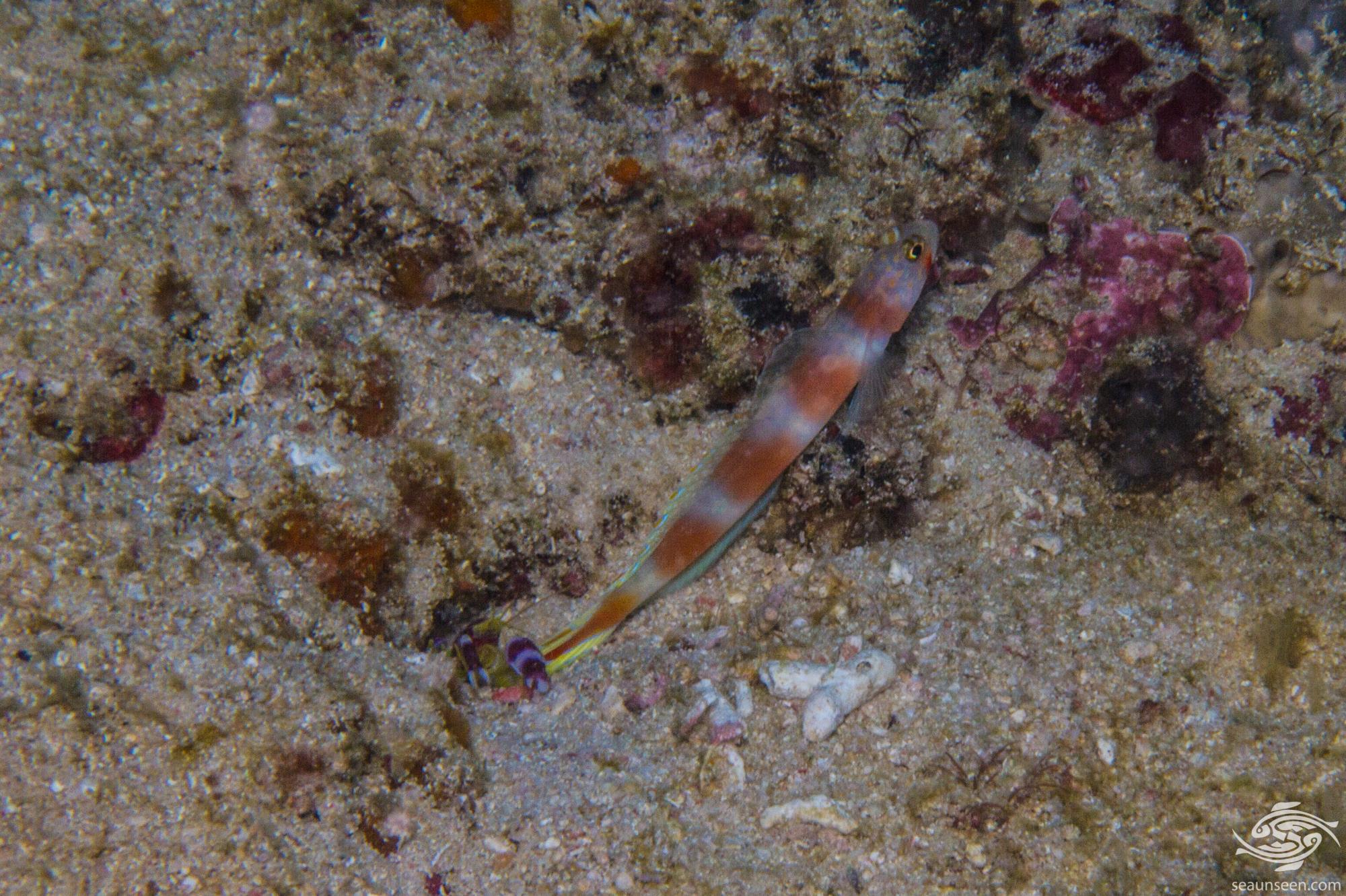 The Aurora Goby has a proportionally elongated body and large gold ringed eyes on the top of their head giving them a good field of vision. The base body colour is an off white-silver colour and there are five pink bars on the body with the last being on the front of the caudal fin.

Under the eye there is a distinctive red teardrop shaped mark going towards the corner of the mouth. Some specimens have yellow on the caudal fin and a series of blue ringed red dots behind the caudal bar.  The pelvic fins are well developed and the fish use these to perch on.  They grow up to 11 cm in length. 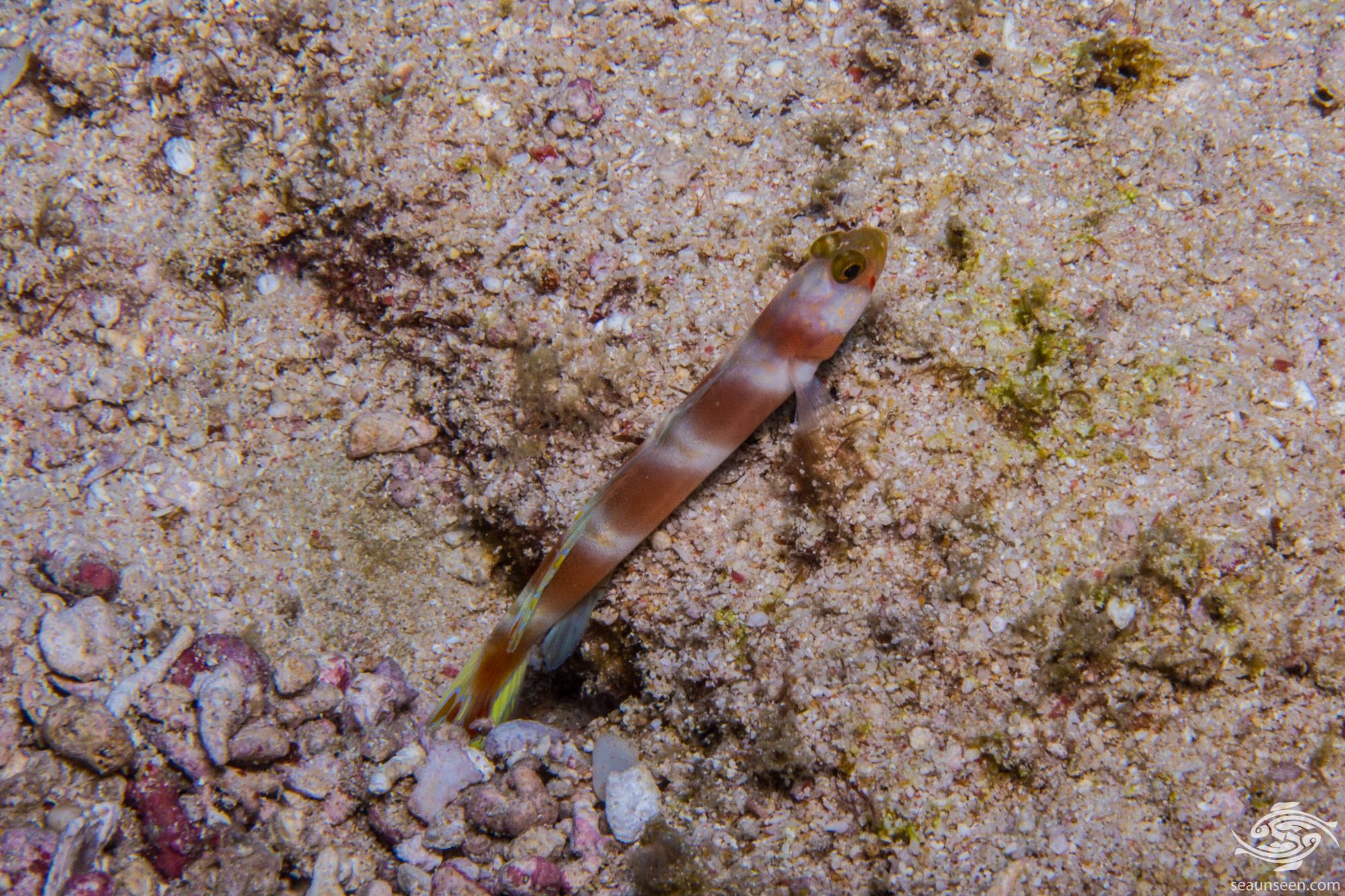 AURORA GOBY IN THE WILD

The Aurora Goby is usually found on sandy mixed rubble areas in depths from 5 meters down to 35 meters. They are cautious fish and are often difficult to photograph as they are quick to head down into their burrow. One is lucky if one can get two photographs of the same fish before they head down their burrow.

The fish and the shrimp remain in physical contact with each other for most of the time, with the gobies tail almost constantly in touch with the shrimp. If a threat is detected while the shrimp is out the burrow the gobies gives its tail a fast flick and both shoot down the burrow at quite some speed. If one waits for long enough the goby will eventually stick its head out the burrow and when it feels safe will partially emerge again. 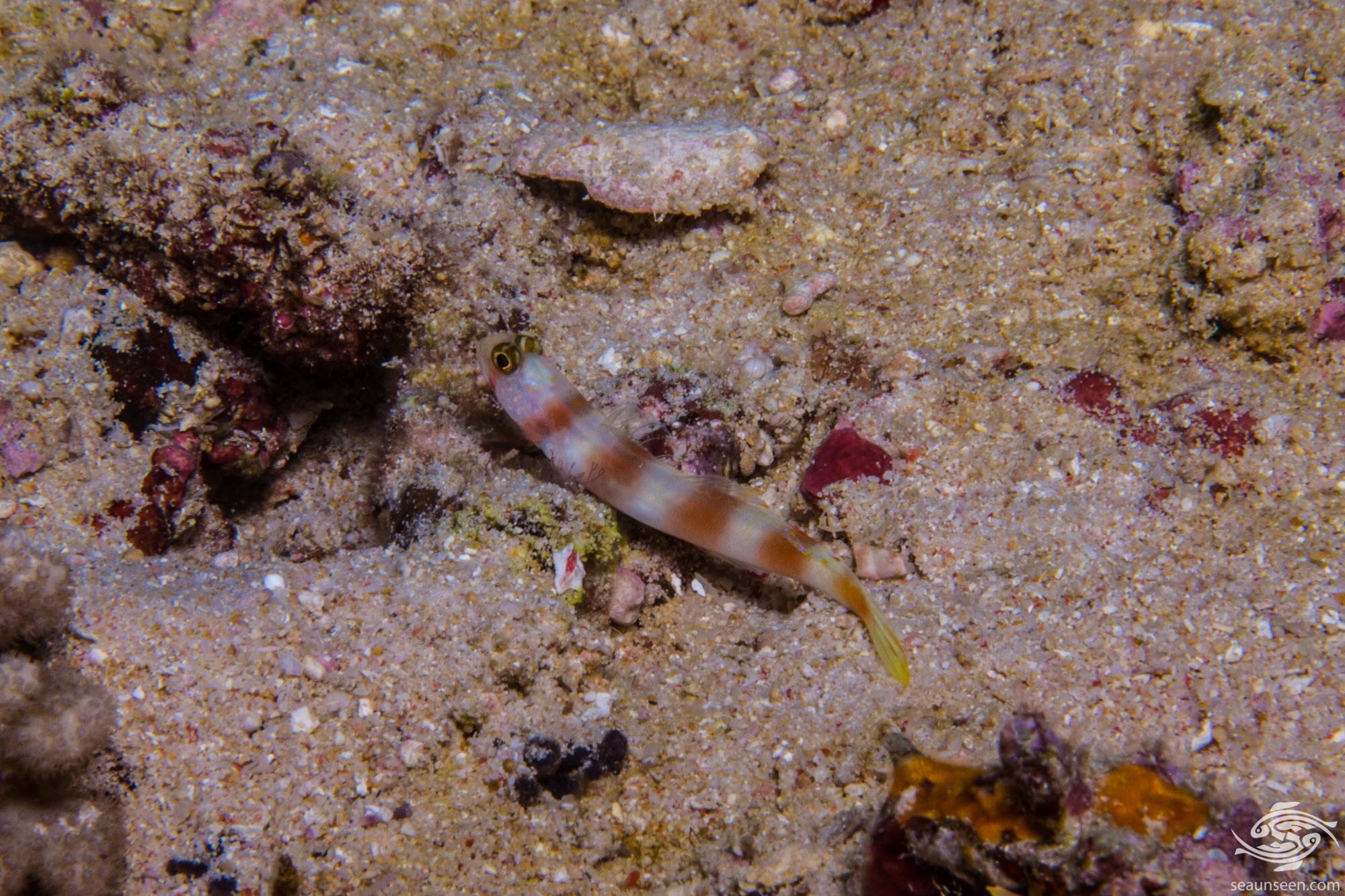 The Aurora Goby is found across the Indian Ocean from East Africa to India and south to Indonesia and Malaysia.  They seem more common in sandy areas but are sometimes found in sandy rubble areas interspersed with small corals.

The Aurora Goby feed on planktonic matter passing by their burrows. They have also been observed leaving their burrows and feeding on benthic organisms. 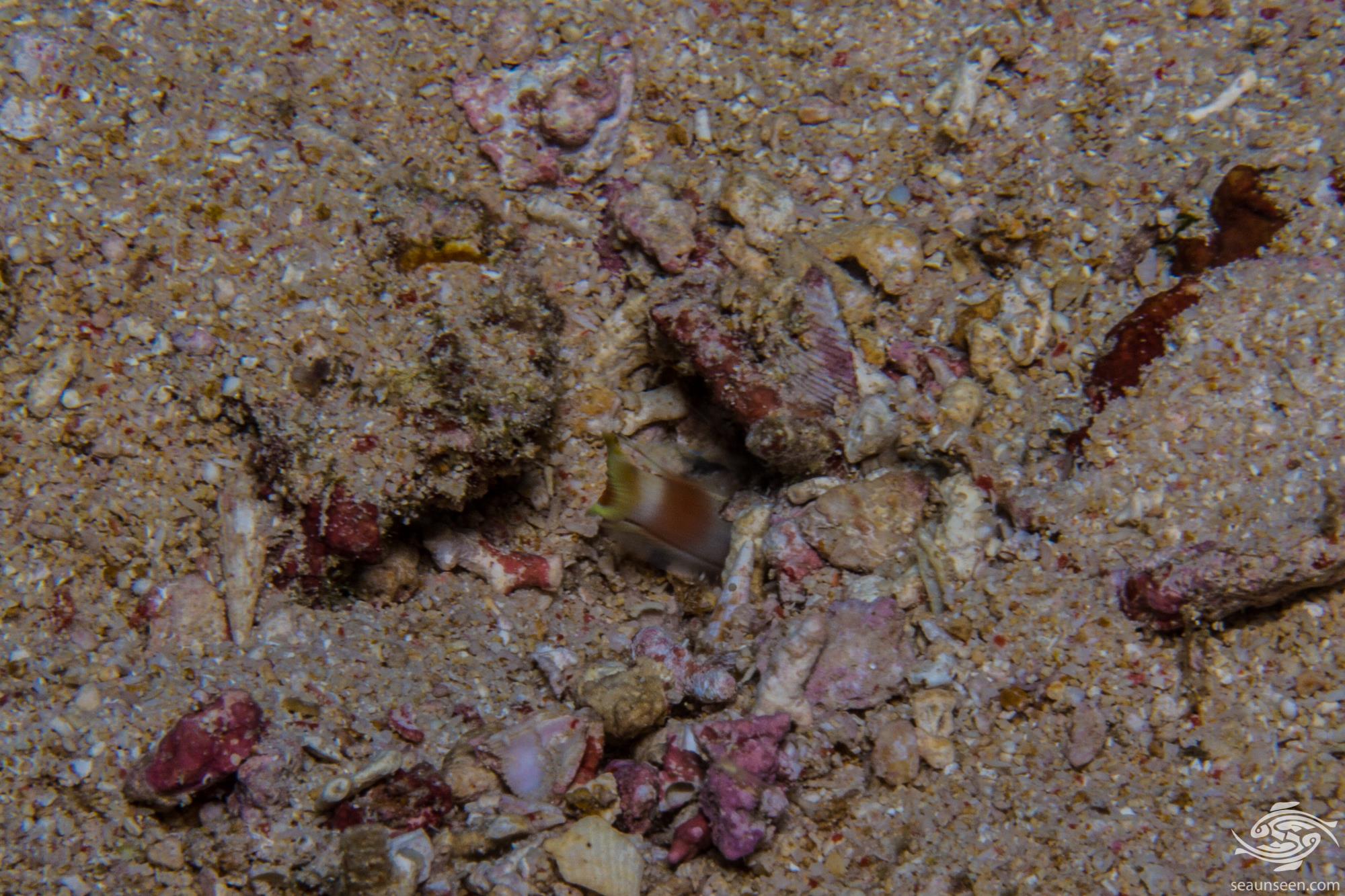 Aurora Goby can be kept in aquariums and make an interesting feature to an aquarium. They have also become popular in Nano tanks. If more than one is being kept then it is best to have a mated pair as the same sex gobies may fight.