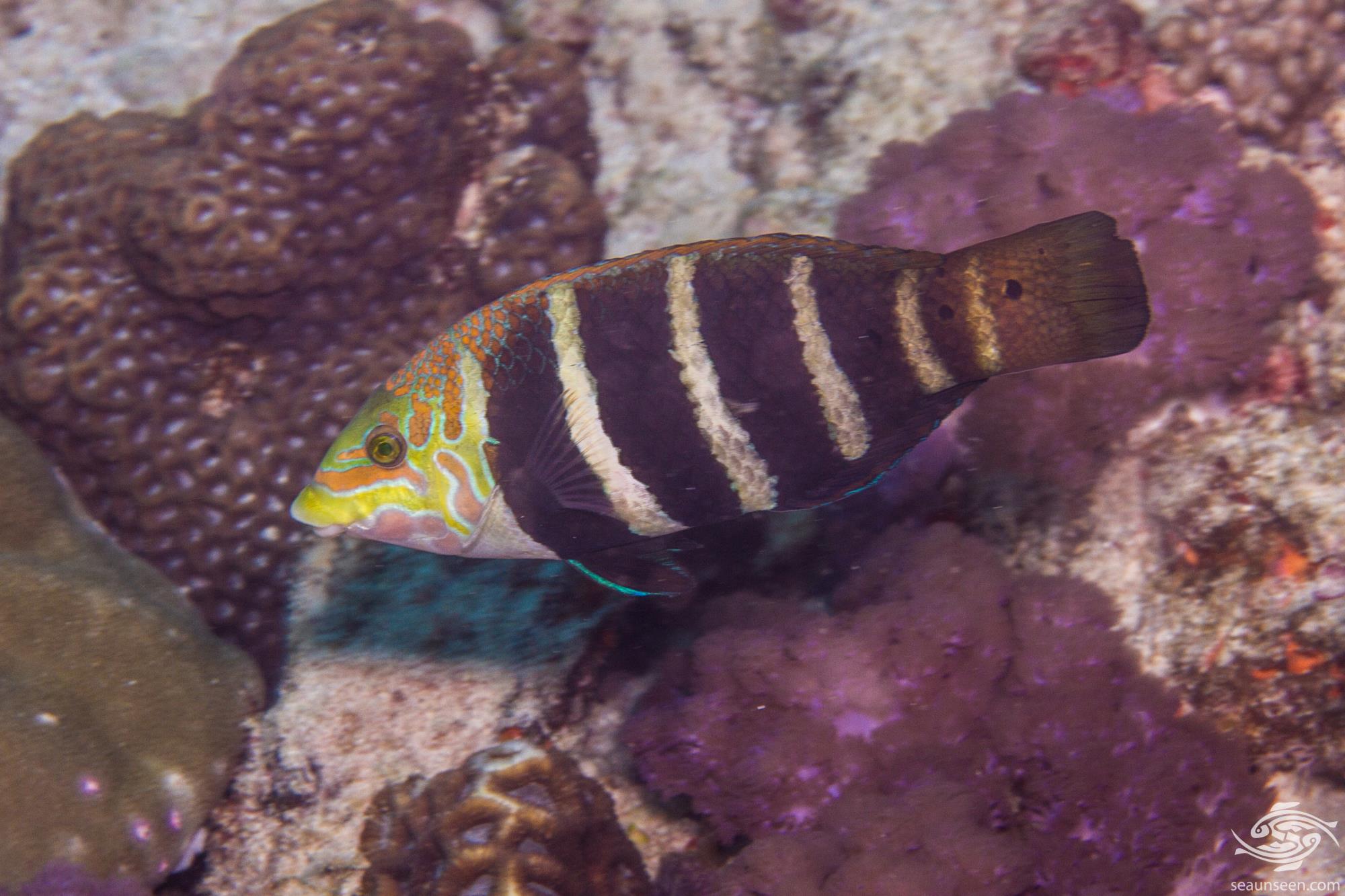 The Barred Thicklip Wrasse (Hemigymnus fasciatus) is also known as the Banded thicklip, Barred wrasse and Five-banded wrasse. They are not a common wrasse on Tanzanian reefs but neither are they uncommon. They are fairly shy and particularly the adults tend to keep their distance from divers. 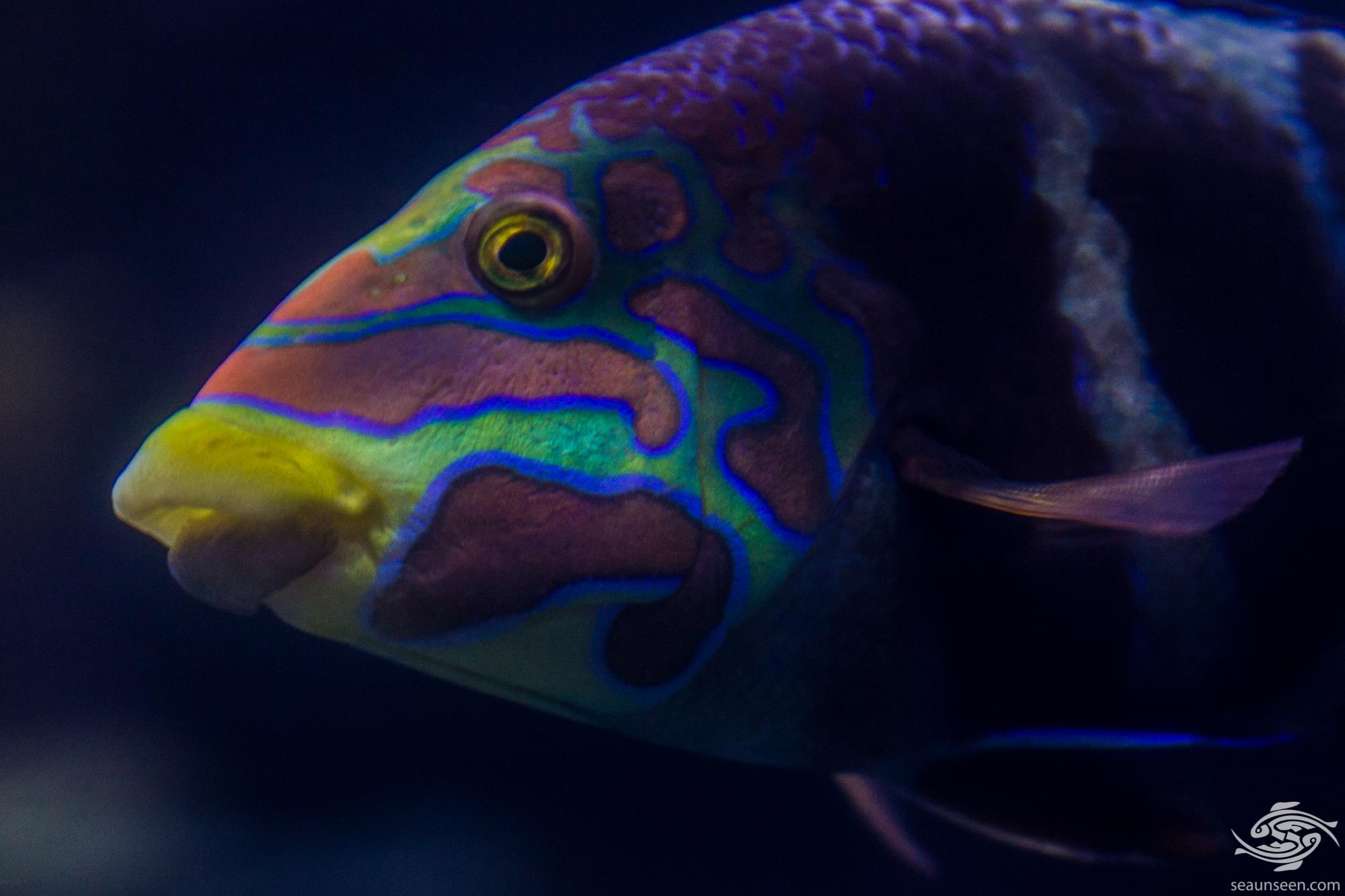 As with many wrasses the colouration changes as the fish ages from a juvenile into an adult.  The images below document the changes from a small juvenile below all the way through to a large adult male lower down in the post. 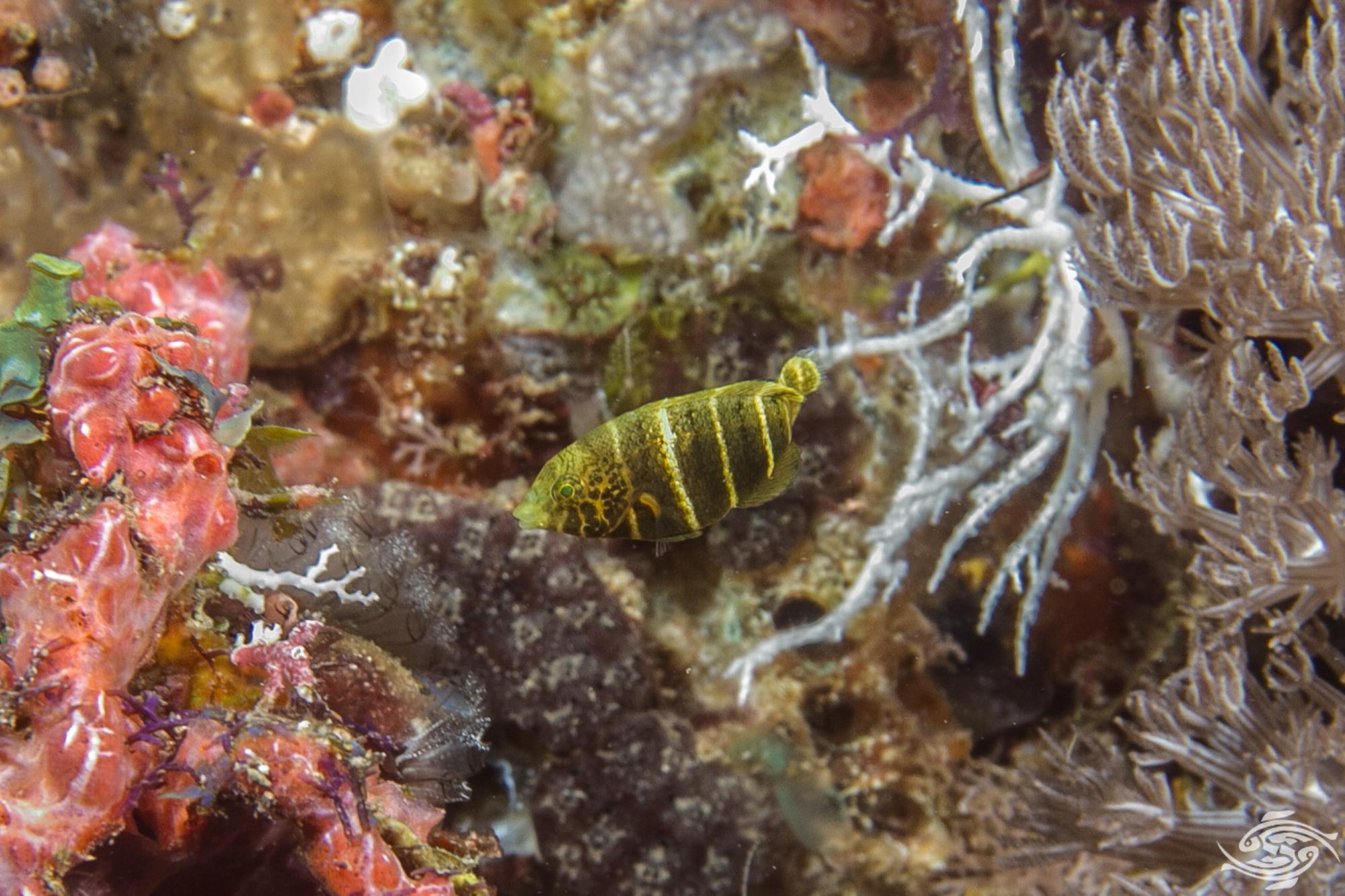 The small juveniles Barred Thicklip pictured above have a browny colored body with five vertical white bars. There are whitish lines radiating out from the face. At this stage in Kwa Zulu Natal they are known as Teddy bear Wrasse. 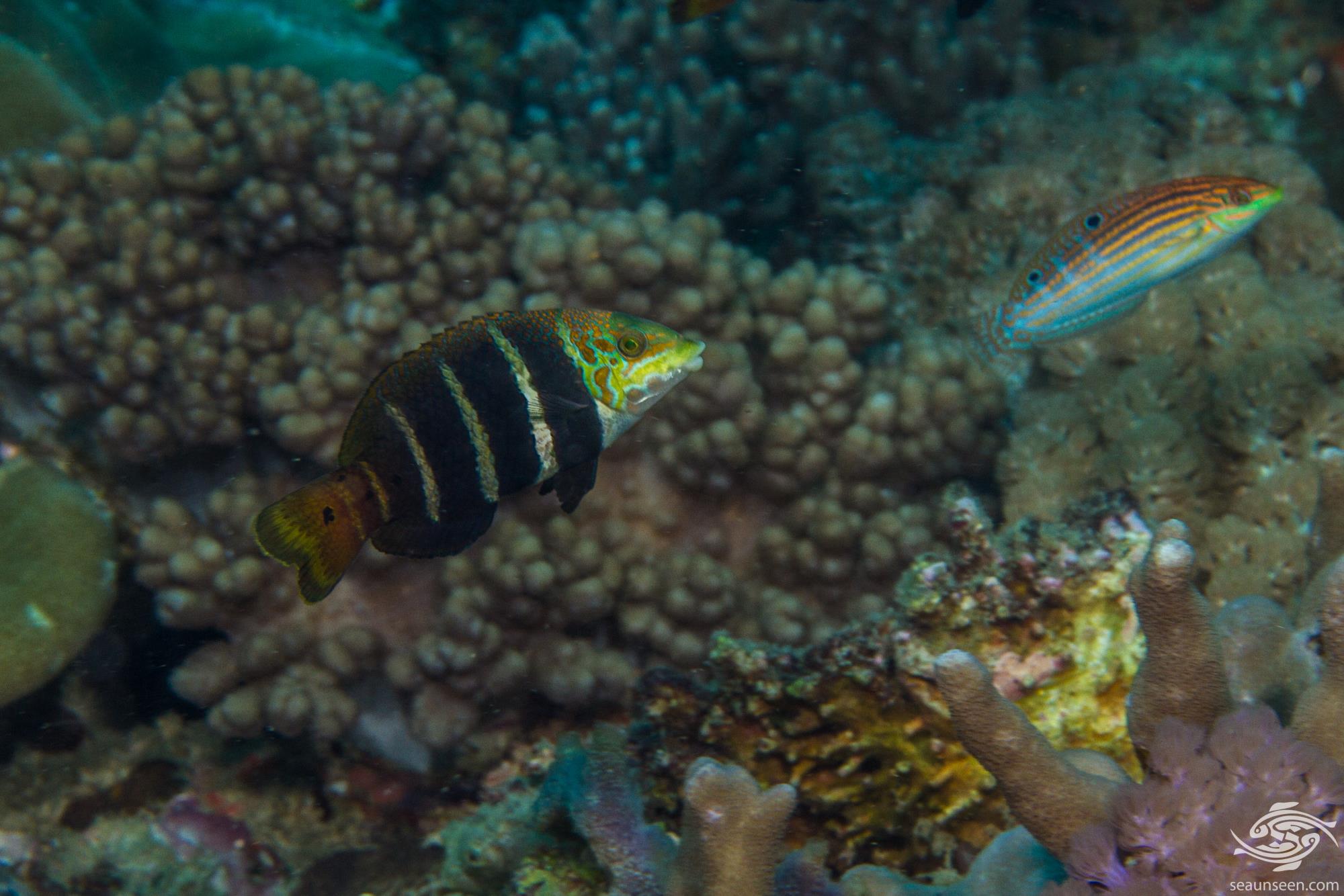 In the next stage the body turns black and distinct white lines develop and the face turns green with dotted orange markings developing on the dorsal area behind the eye. As the fish ages the colors on the face become more vivid. The body and caudal fin thicken. 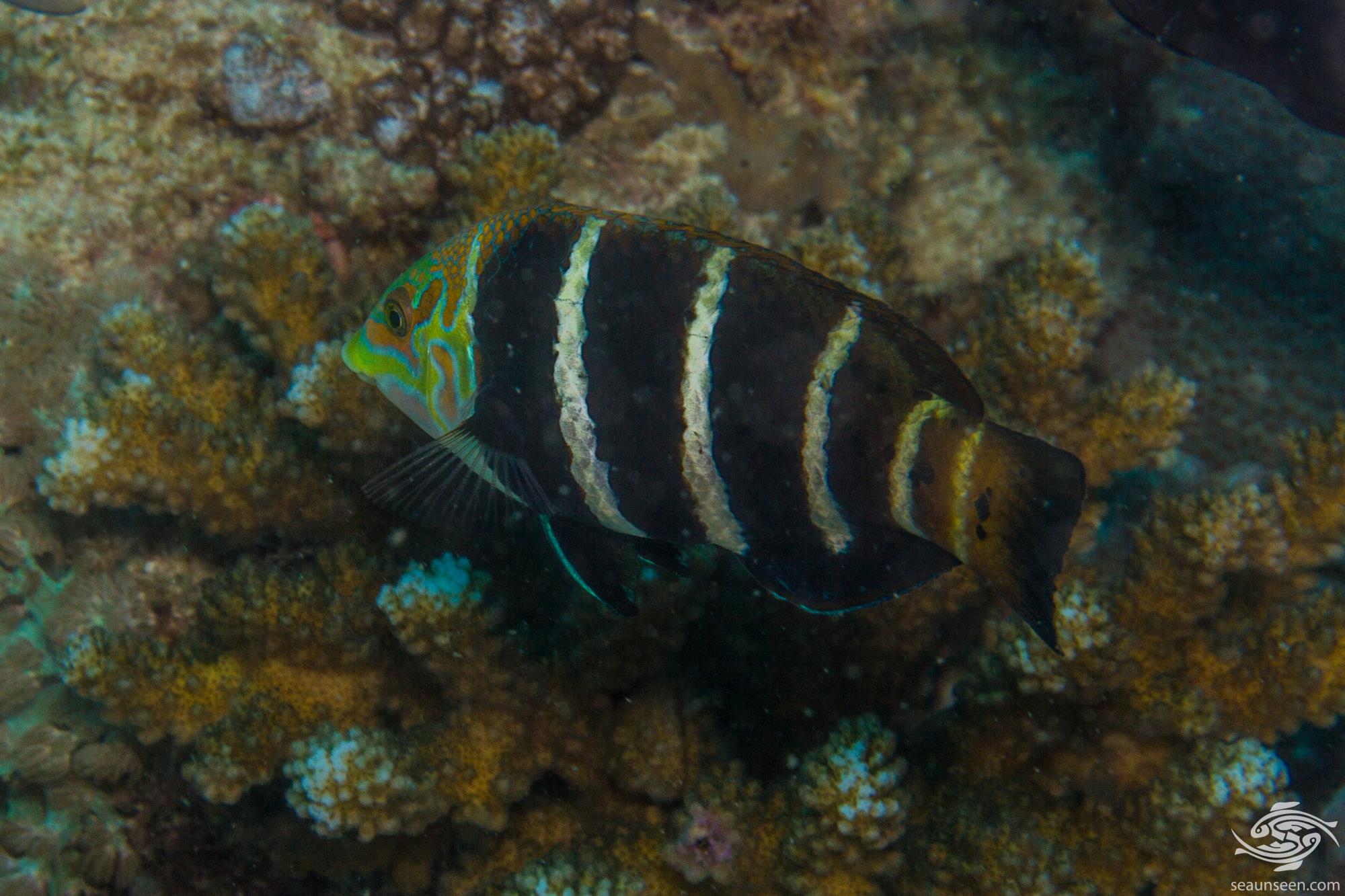 As the Barred Thicklip fish grows so the upper lip goes yellow and blue lines develop on the face. The orange lines become more distinct.  The lips also increase in size proportionally and become more prominent. At this stage the fish is a female. 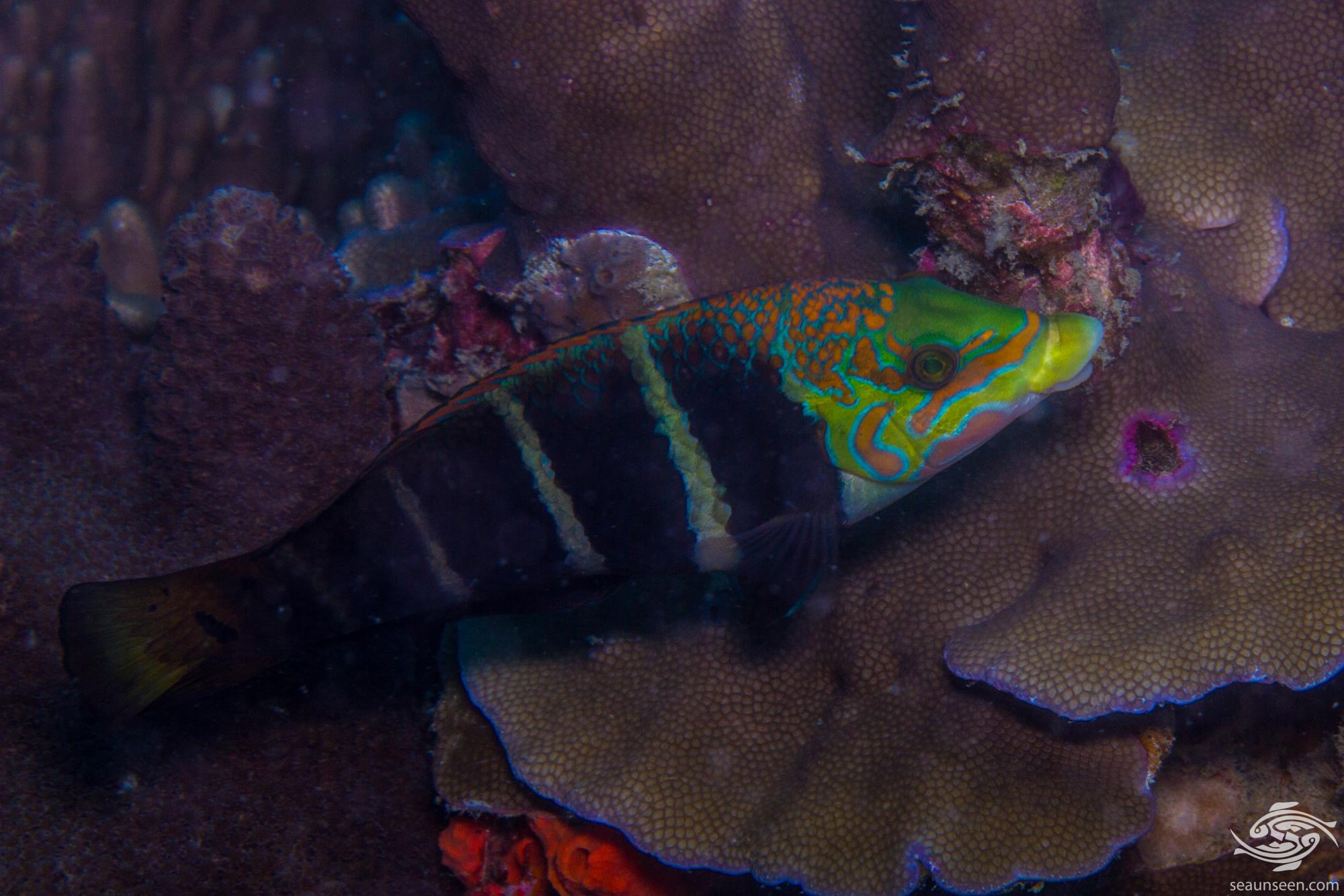 Once the Barred Thicklip fish reaches around 30 cm the colors seem to reverse and the body becomes white with black lines on it. The orange on the dorsal area above the eyes is replaced with blue. There is literature that says that the males reverse colors during courtship and this is possible, but all the larger specimens we have seen have had the colors reversed. If we ever see one with the colors not reversed then we will update the post. 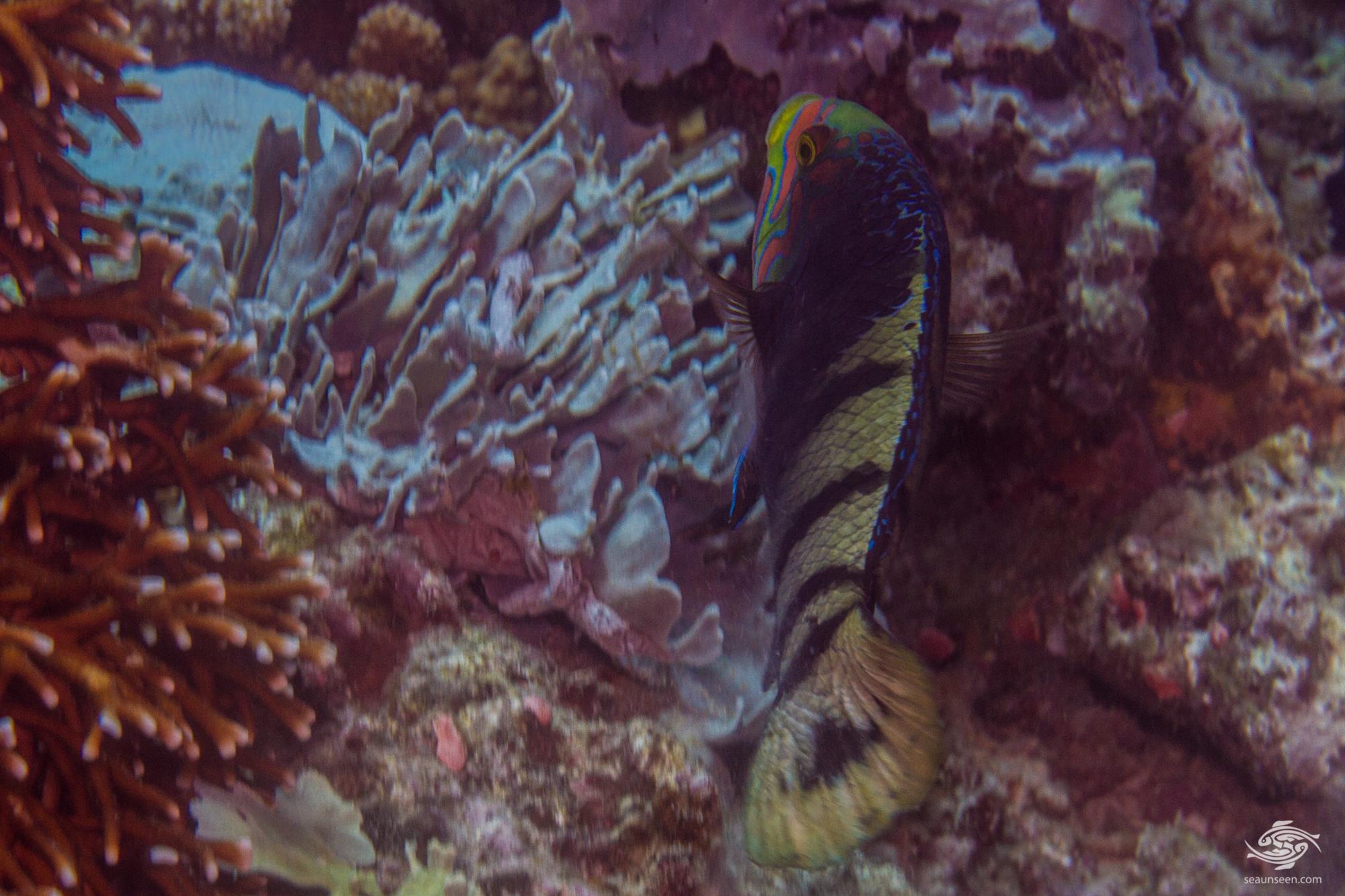 The specimen in the image below was at least 50cm in length but possibly larger. 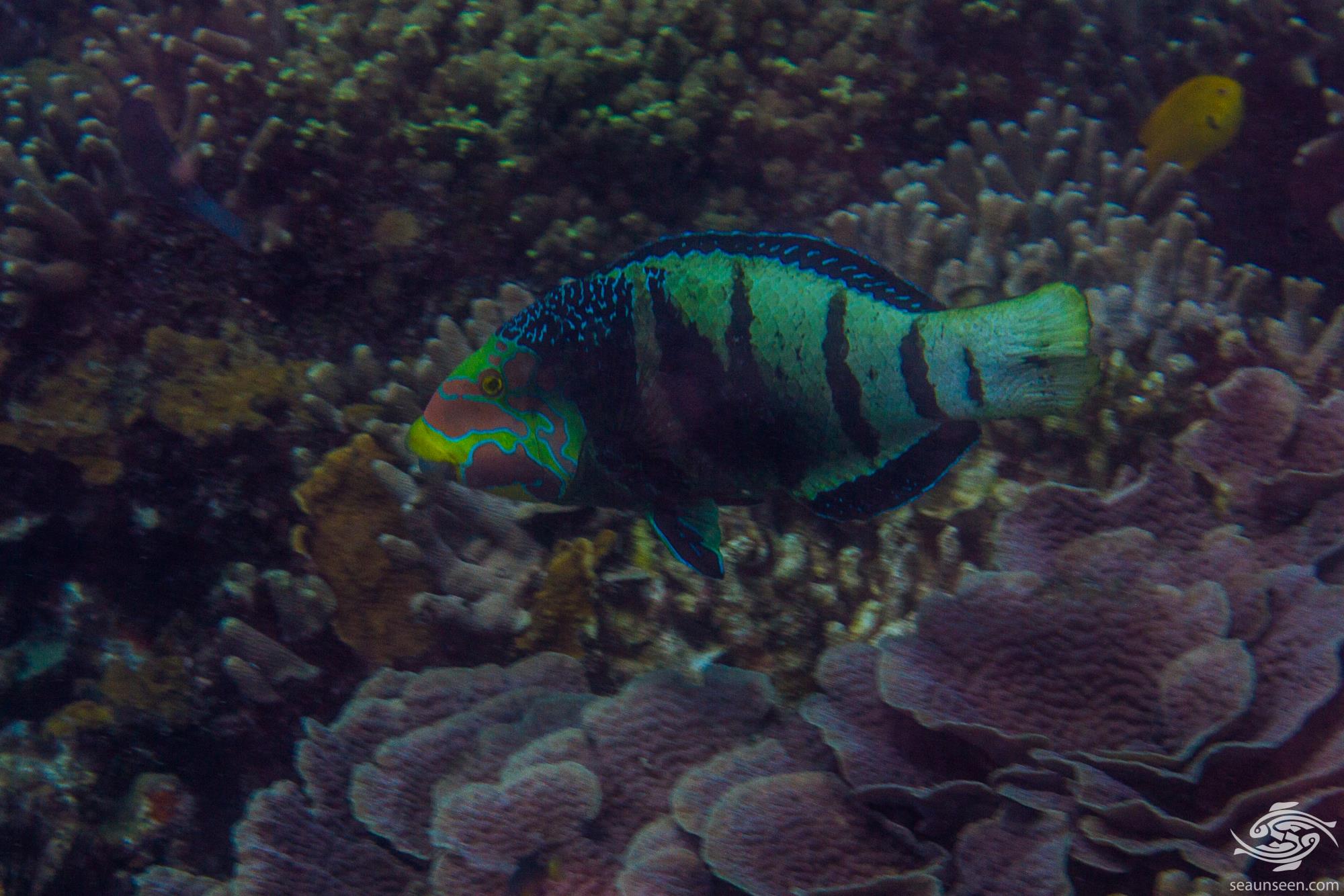 BARRED THICKLIP WRASSE IN THE WILD

The Barred Thicklip Wrasse juveniles are fairly common on the reef and always stick close to cover. As the fish age so they become less reclusive and often feed with juvenile Goatfish and Parrotfish.  When they become larger they begin swimming the reef on their own and the large adults become more wary of divers and are often only seen on the periphery of the visibility, heading off as soon as one sees them. Usually one only gets close to them in low visibility. They seem to prefer areas with mixed coral and rubble. 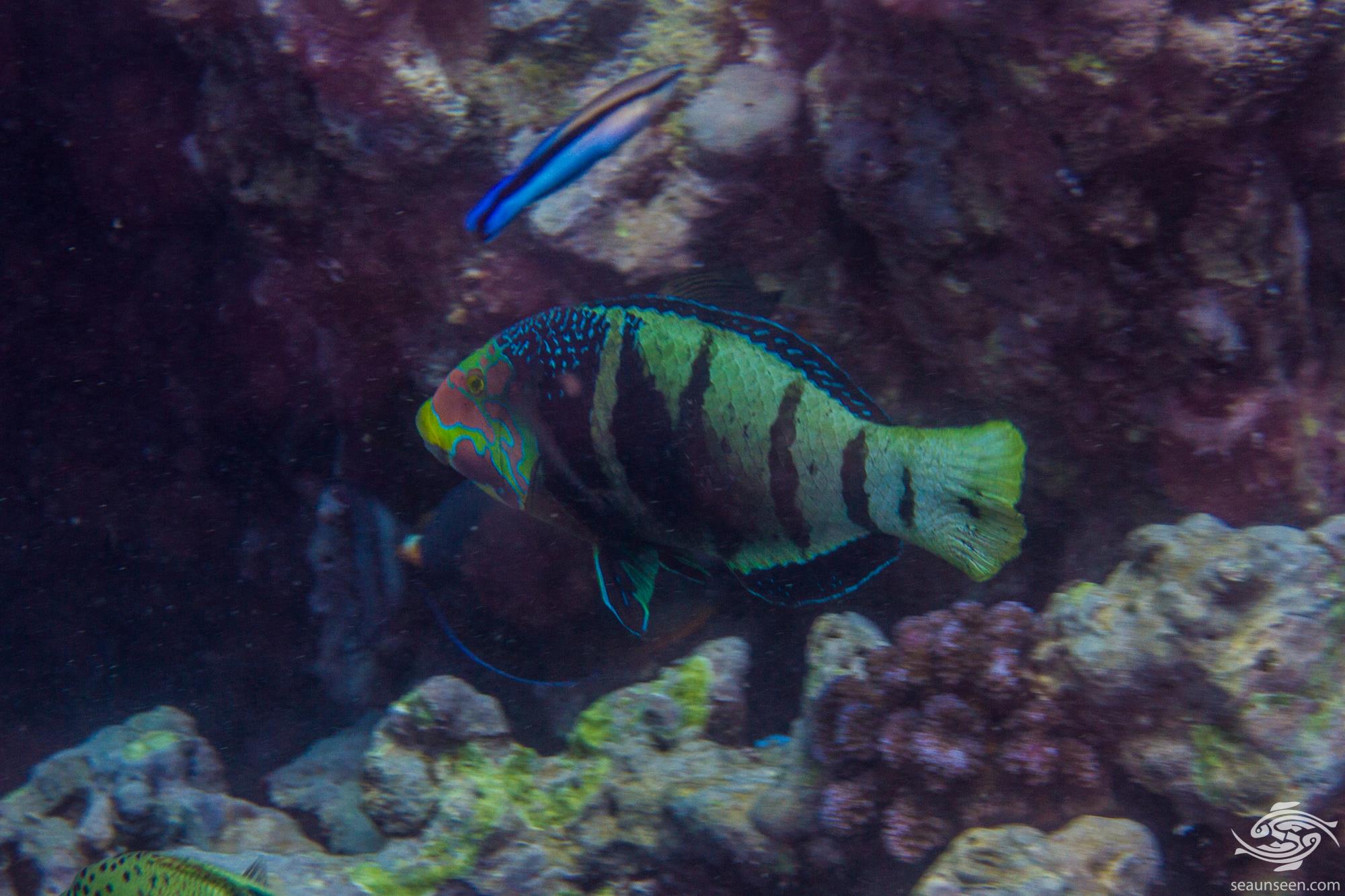 The Barred Thicklip Wrasse is found across the Indo west Pacific area  from the Red Sea down to South Africa and across to Japan in the north, south to Australia and the Great Barrier Reef and east to the mid Pacific.  Their depth ranges from 4 to 35 meters but in Tanzania the adults are more common from 10 meters downwards. The small juveniles are often seen on shallow protected reefs from 1 to 2 meters downwards. They mainly stick fairly close to the bottom and it is not often that they are seen swimming more than a meter above the substrate. 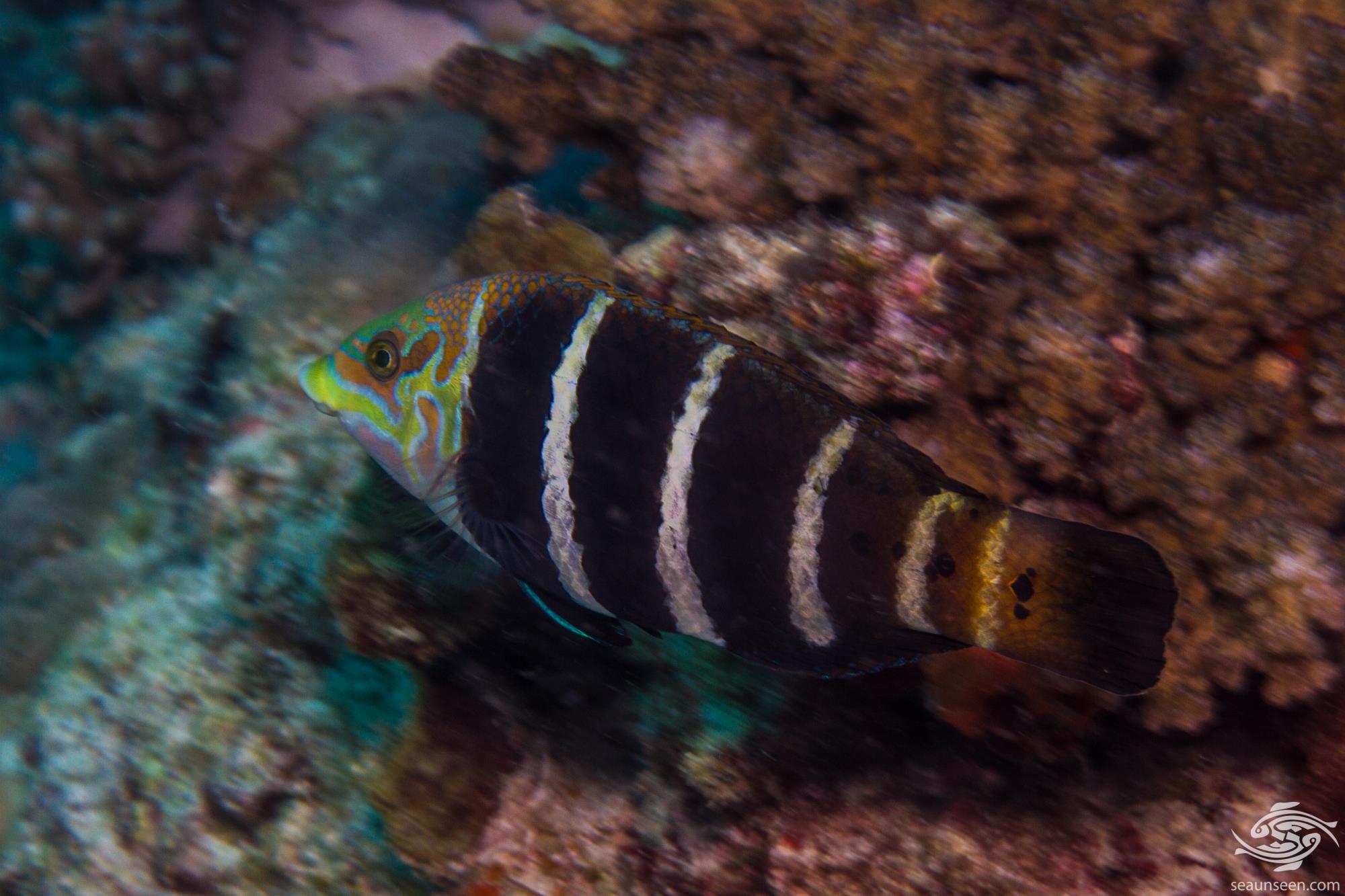 The Barred Thicklip Wrasse feeds on small crustaceans, molluscs and echinoderms. The mid size juveniles often feed along with Goatfish and juvenile Parrotfish in Tanzanian waters.

The Barred Thicklip Wrasse is a Protogynous hermaphrodite. They first develop into females. As they age so some specimens based mainly on social cues transform into males. Little is known of their breeding habits but they are said to spawn in small groups. We have never more than one specimen of this species at the same time.  They always seem to be singular. 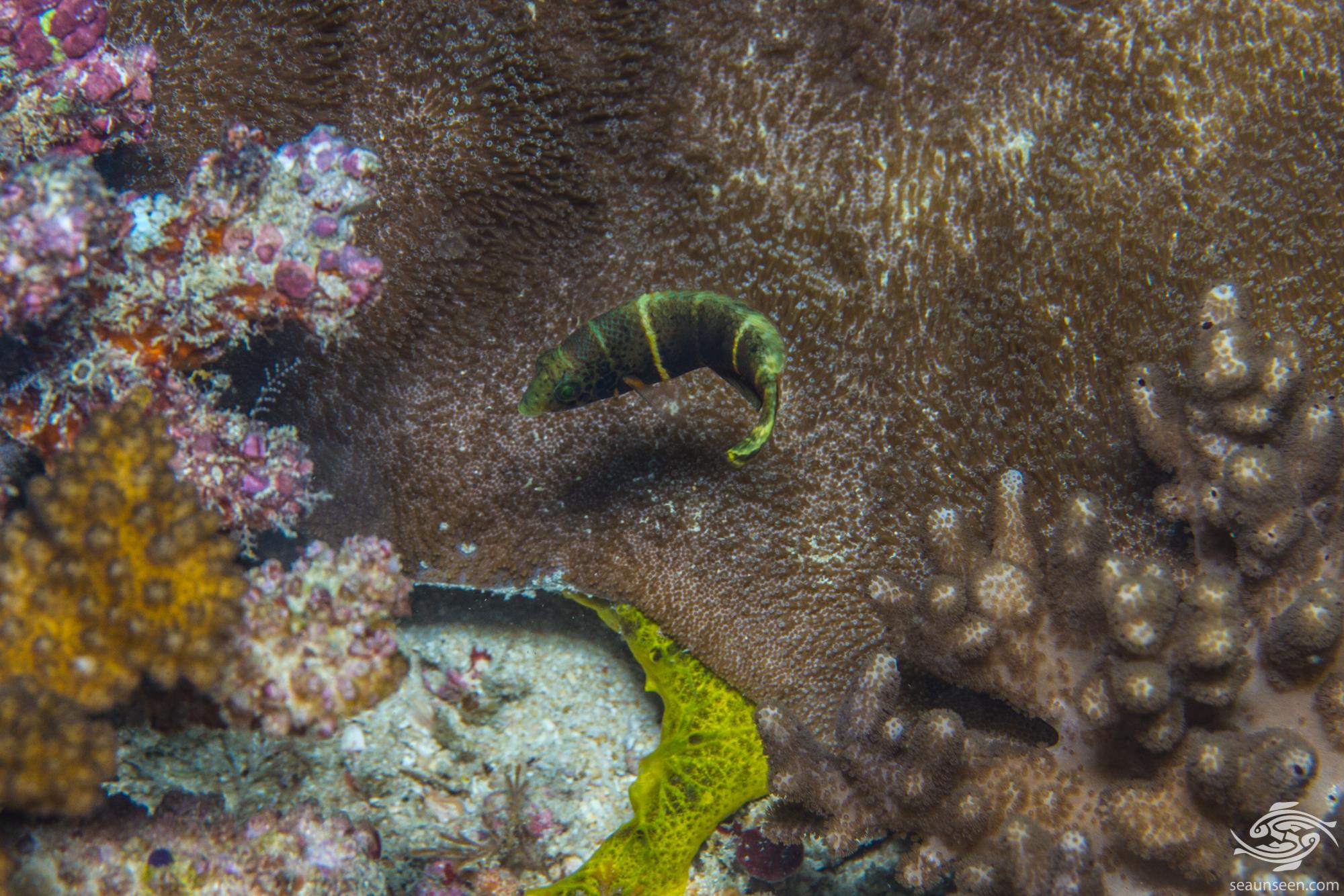 Barred Thicklip Wrasse juveniles are sometimes kept in aquariums and are easy to feed and care for but given the size of the adults a large tank is a pre requisite.  These fish are really only suitable for very large fish only aquariums. They are not suitable for reef tanks.