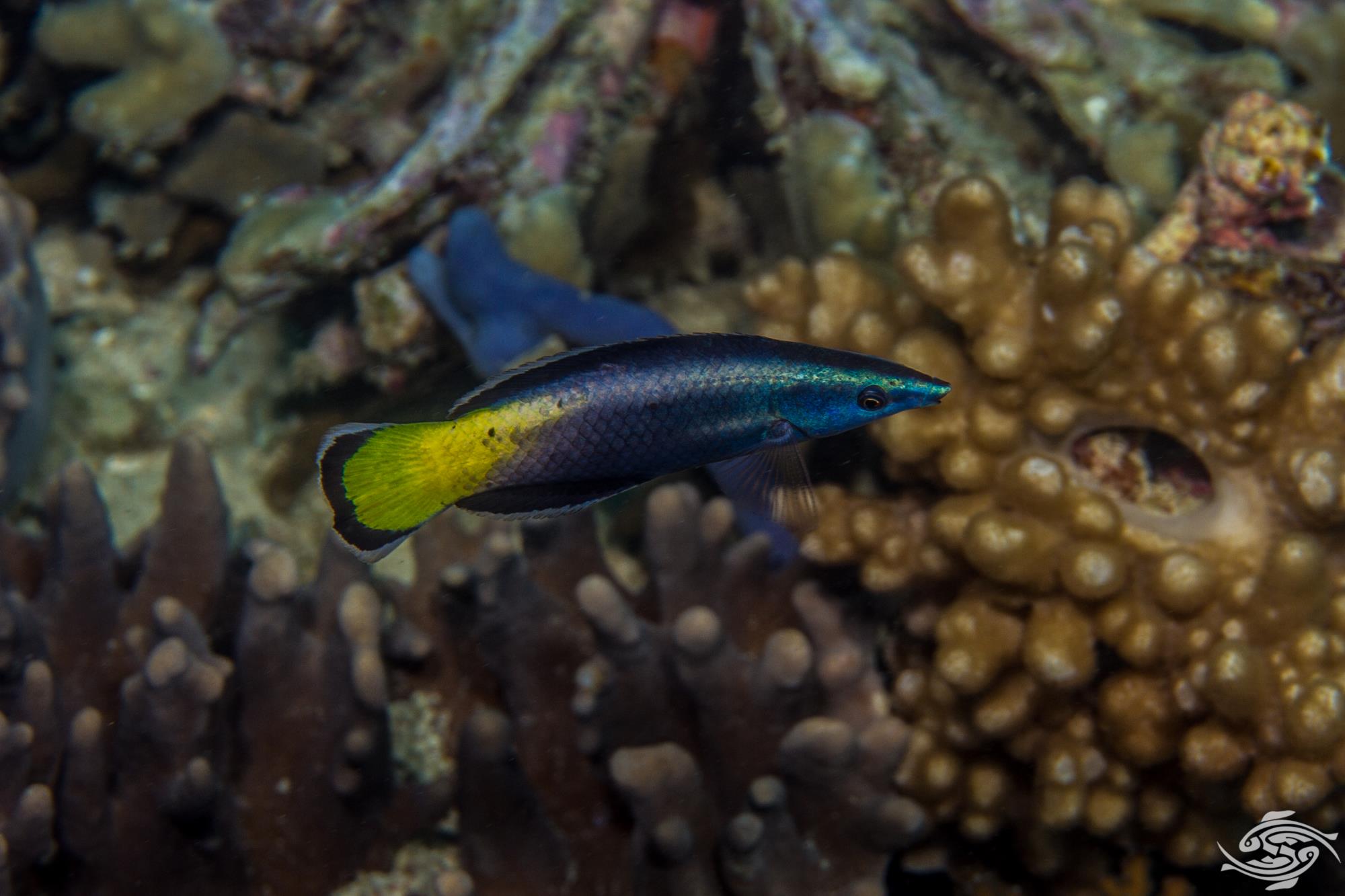 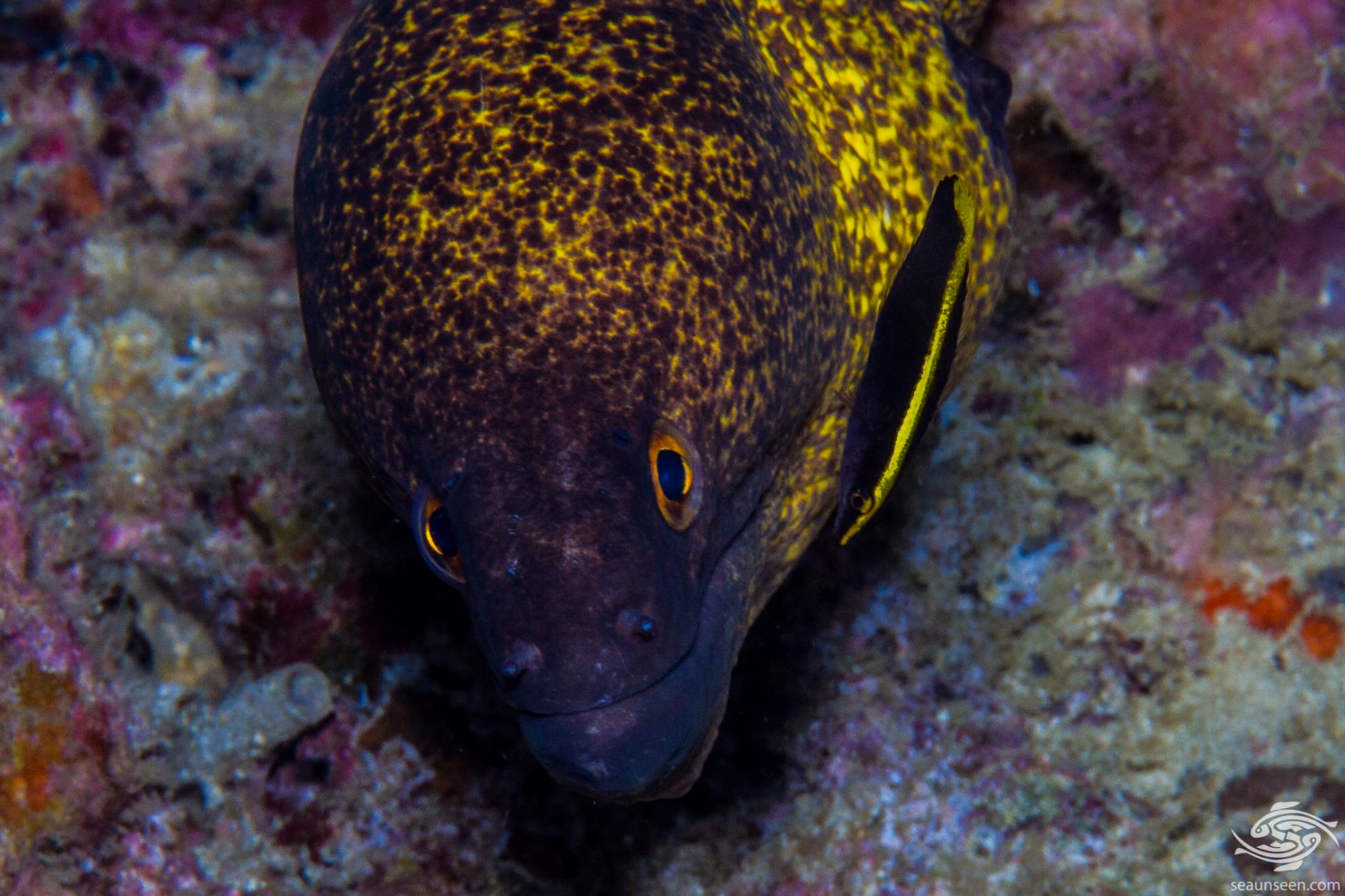 The Bicolor cleaner wrasse have a long thin body shape which tapers into a sharp nose. The caudal fin is proportionately broad and square.  Juveniles have a predominantly black body with a yellow stripe that runs down the length of the upper body just above the eye. The caudal fin is yellow edged in black. This stage can be seen in the image below.

As the fish ages so the yellow on the caudal area extends forwards onto the body.  The head area takes on a blue tint making for a very attractive looking fish. The larger males grow up to 15 cm in length and on these specimens the yellow can extend almost halfway up the body. 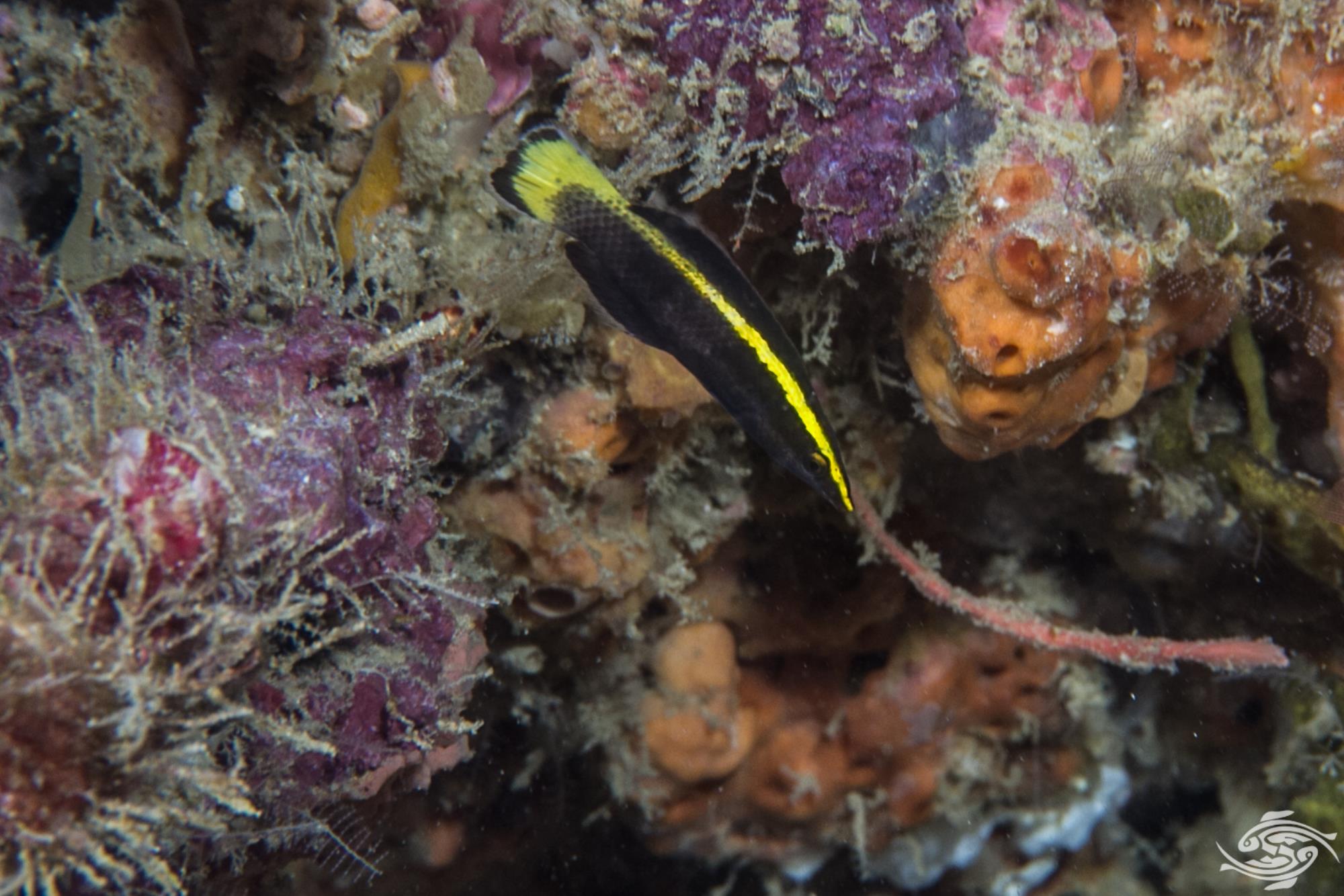 BICOLOR CLEANER WRASSE IN THE WILD

The Bicolor cleaner wrasse has quite different habits to its cousin the Blue-streak cleaner wrasse. Although they run cleaning stations on prominent spots on the reef, they often leave the cleaning stations to search for clients to clean. If a fish swims through their piece of territory they will often vigorously pursue it. If they see a fish swimming past with parasites on then they will clean it whether it is a willing participant or not. They also display the same dancing pattern that other cleaner wrasse utilize to attract client fish to their cleaning station.  This involves the fish sitting at an approximate 45 degree angle and bobbing up and down. There will often be several fish waiting for cleaning on these stations and the wrasse seem to give priority to those fish which have more parasites on them. The area around the cleaning station is very much a neutral area and the usual territorial disputes that take place on the reef seem to be forgotten. 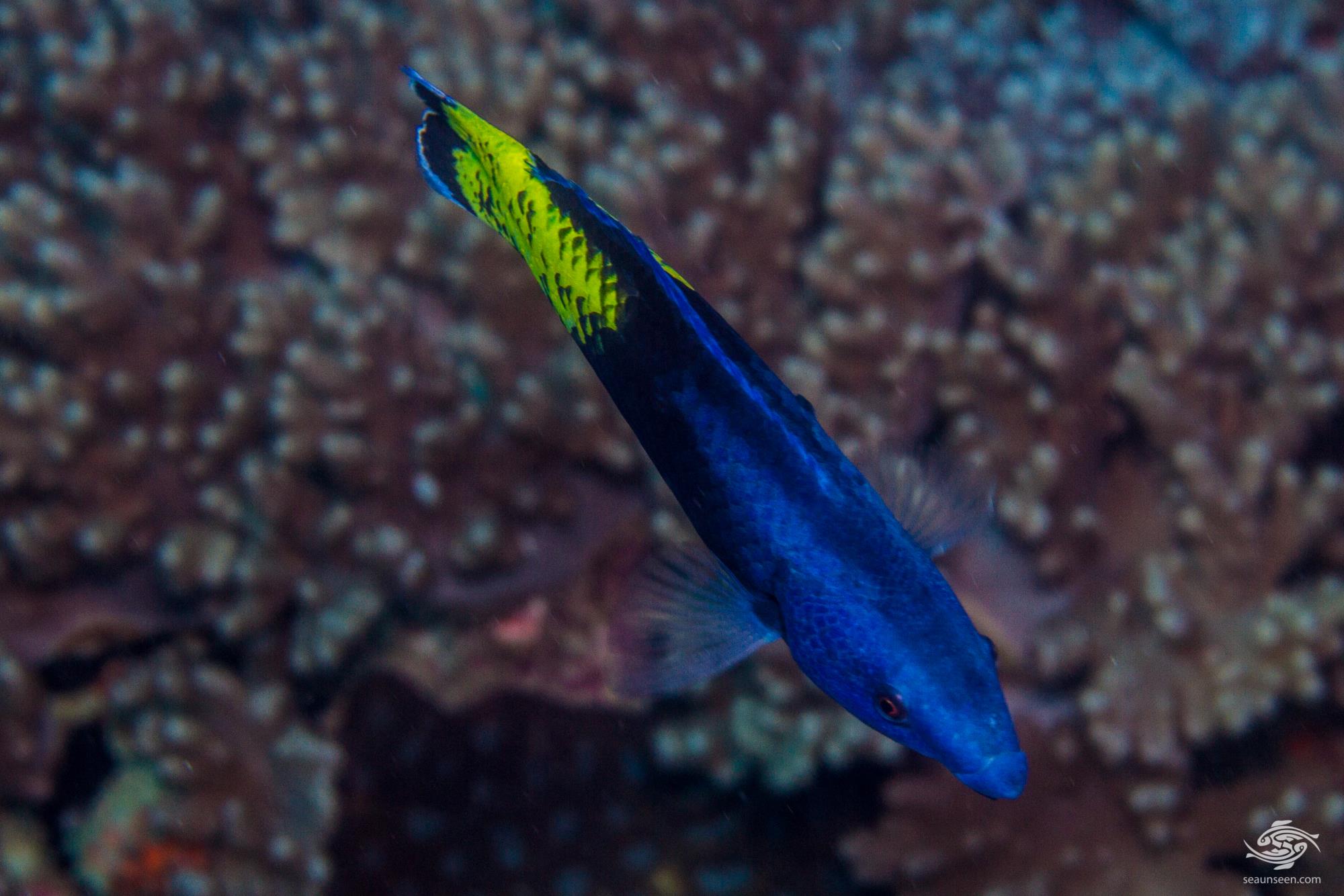 This symbiotic relationship benefits all parties as the wrasse obtains food and the client fish have the parasites removed from them. The Bicolor cleaner wrasse is a very active and fast moving fish. With this metabolism they require large amounts of food.The juveniles are usually seen singly and are fairly cryptic. They tend to operate inside caves that are inhabited by nocturnal species. As they age so they are usually seen in pairs.All the cleaner wrasse sometimes cheat and instead of cleaning their client will eat mucus off various parts of the client. If this occurs the client fish will often try and move to the wrasses partner. 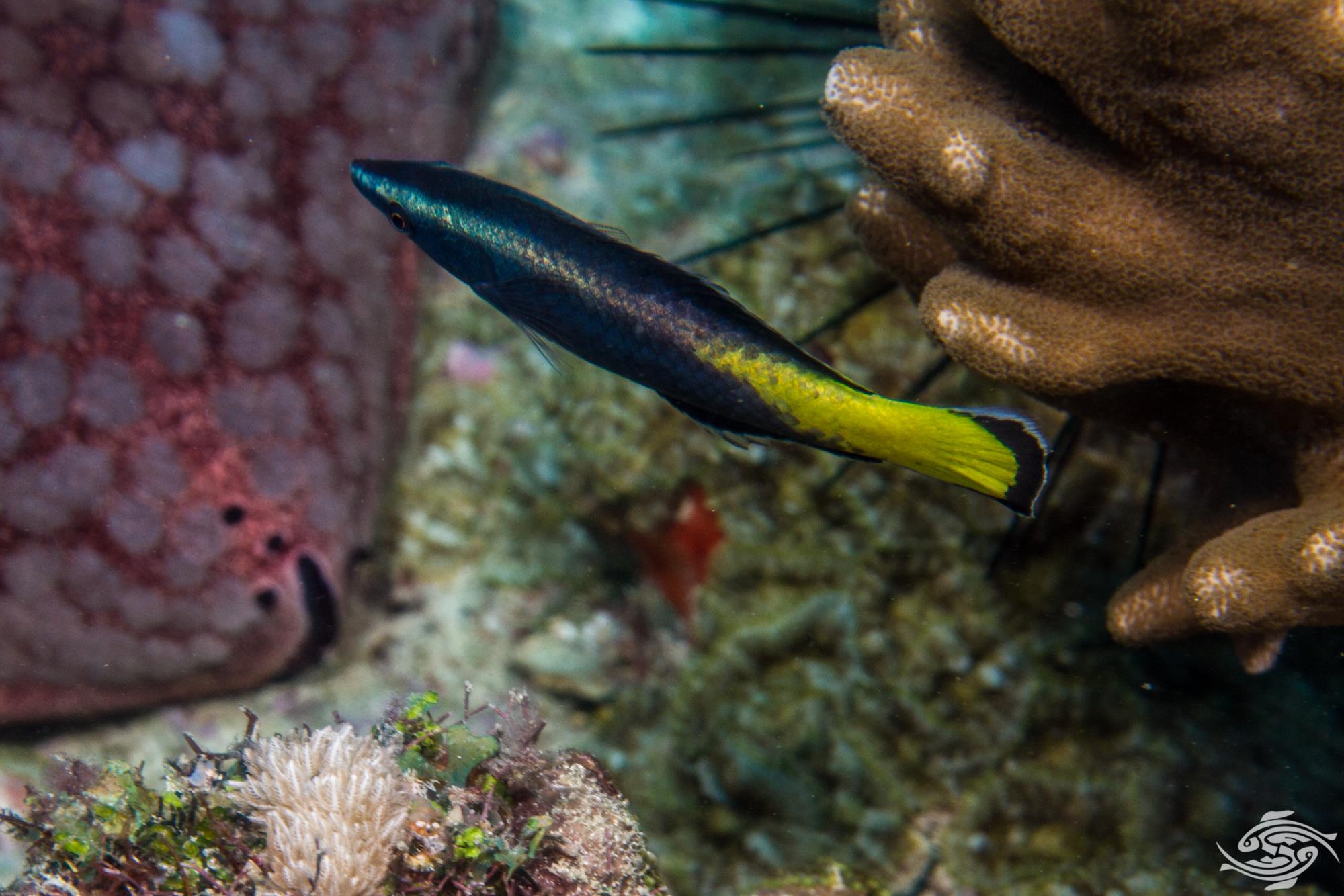 The Bicolor cleaner wrasse , is found across the Indian Ocean down to southern Kwa-Zulu Natal and across to Lord Howe island east of Australia in the west Pacific. Southern Japan is their northernmost habitat. They are mainly seen on corals and in Tanzania they have been seen from 1 meter down to 30 meters. They seem more common in the 12 to 18 meter range. 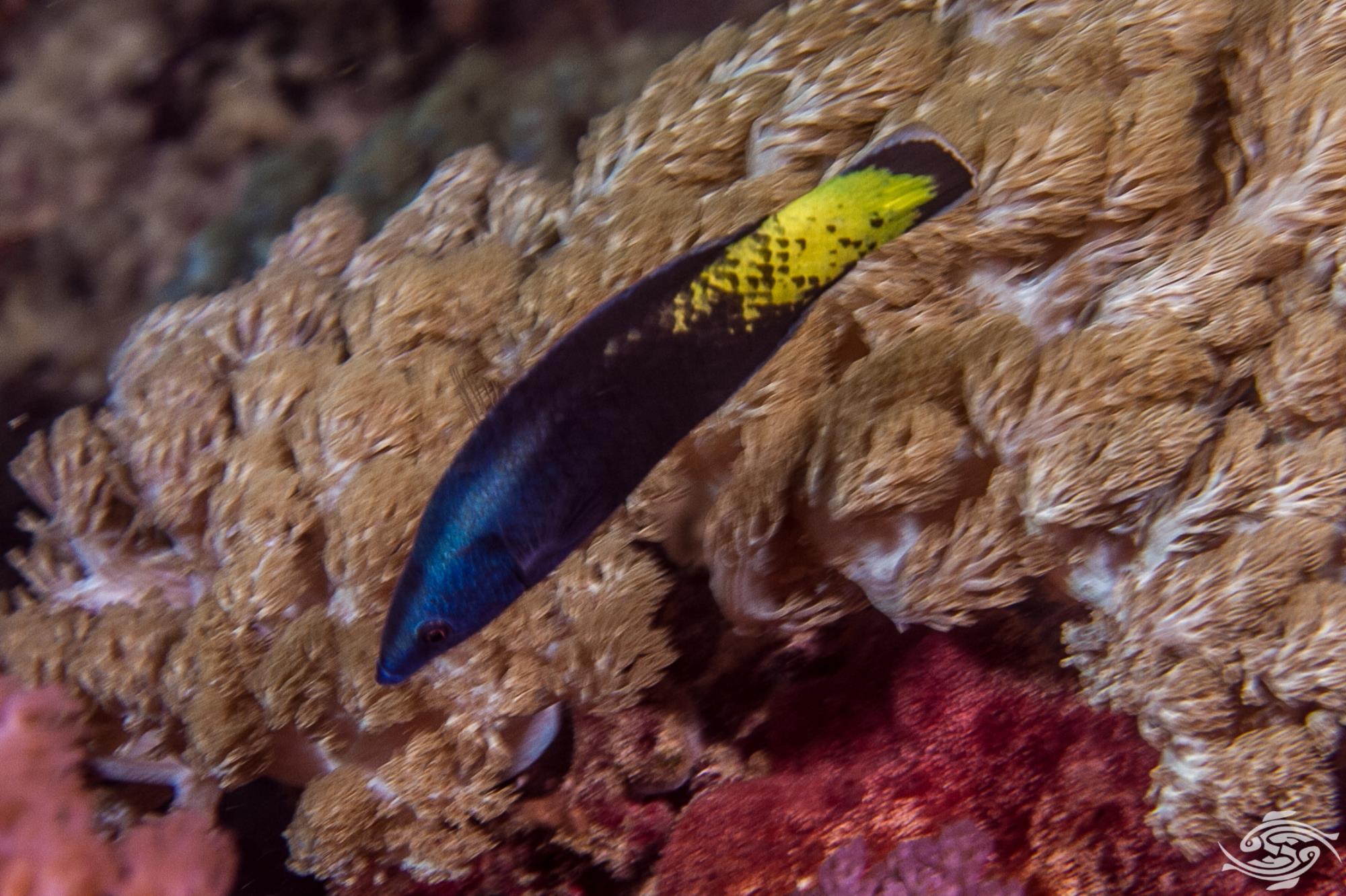 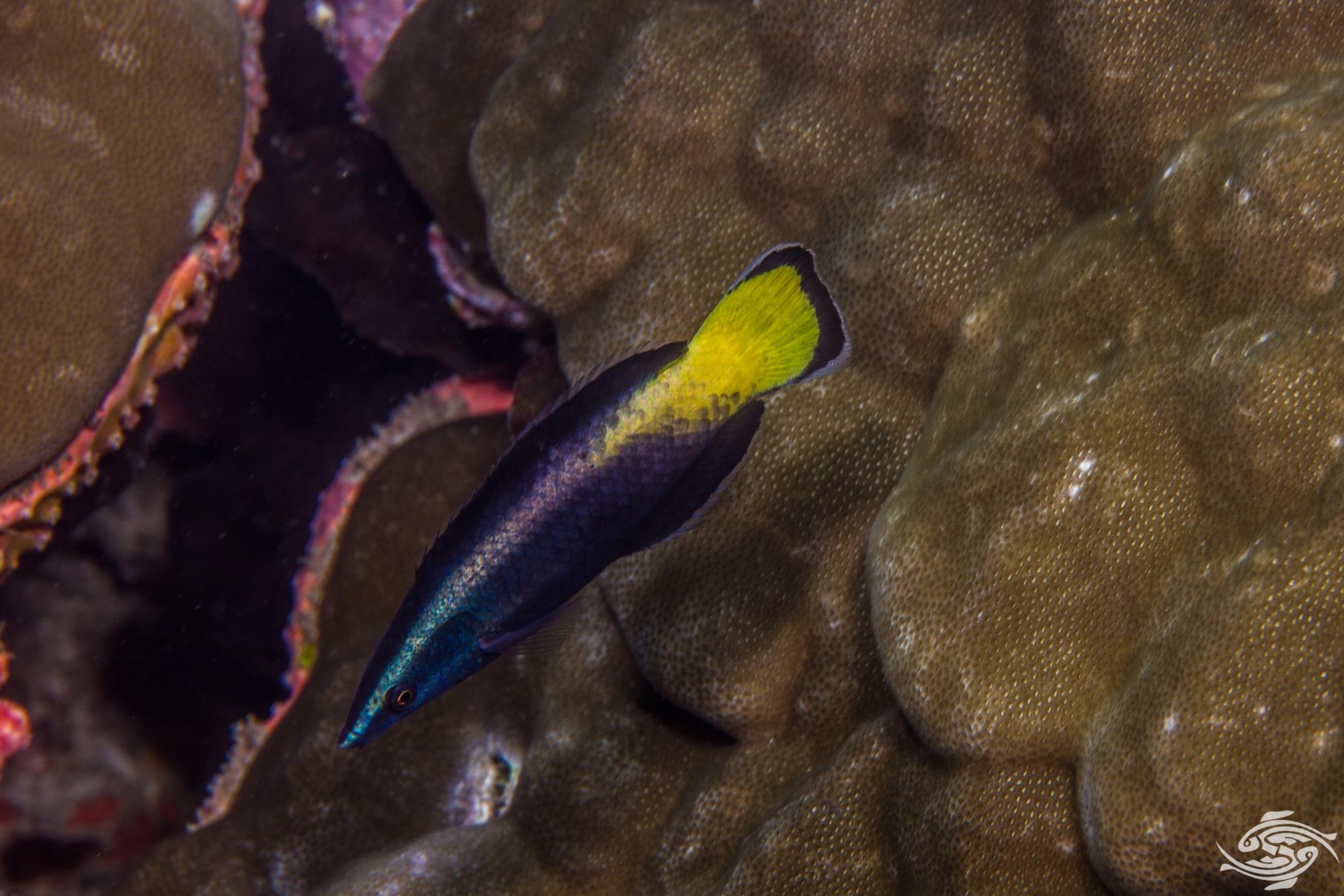 The Bicolor cleaner Wrasse is Oviparous, with distinct pairing during breeding. 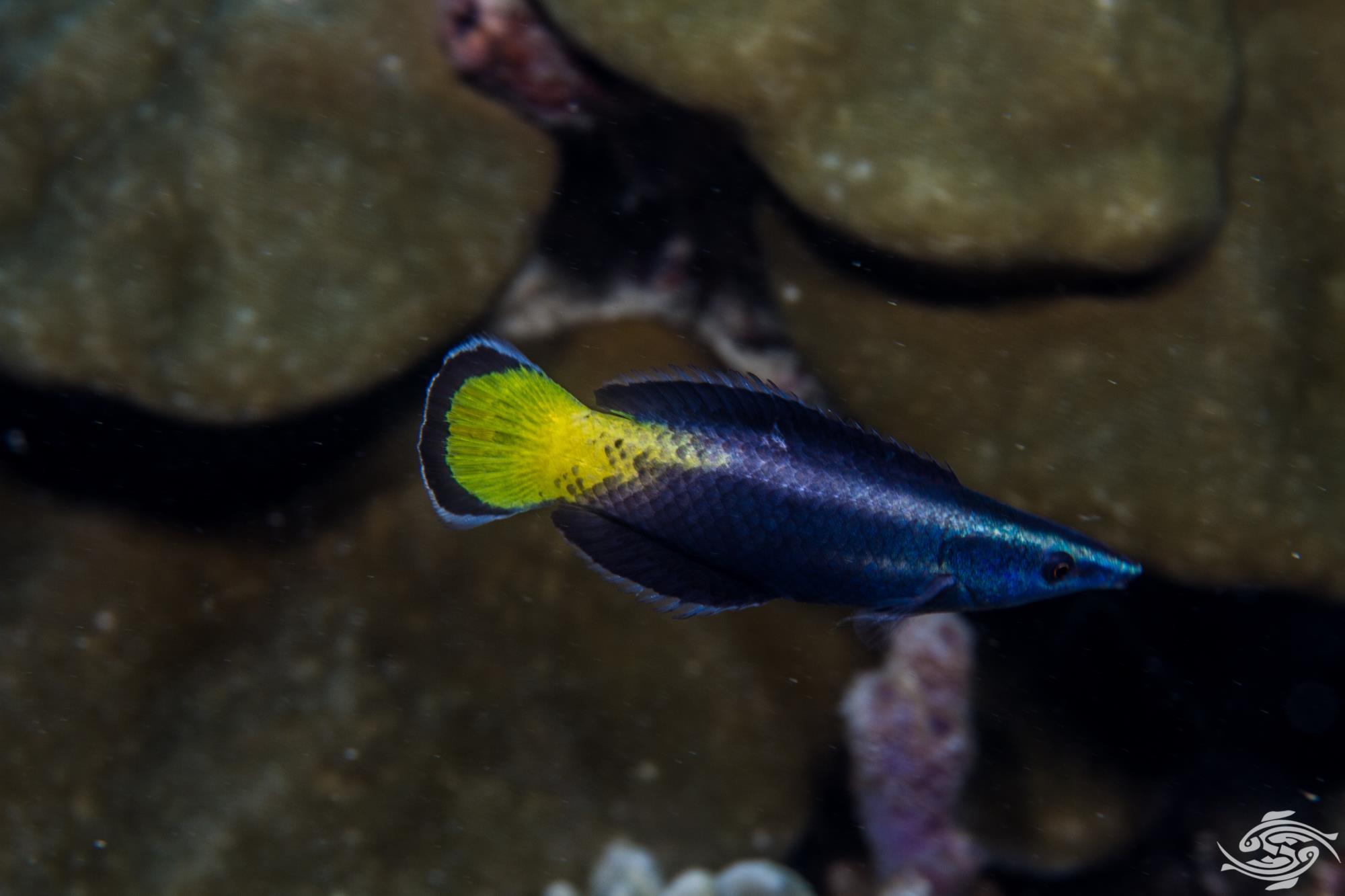 Bicolor cleaner wrasse are kept in aquariums and can make attractive additions to any type of tank. They are however quite difficult to keep. To be able to thrive in a tank they need a large number of fish to feed off of. This is not normally possible and their diet needs to be supplemented with enriched meats and flakes. They also require some sand in the aquarium to burrow into. A tank should also be covered as they are jumpers and they will jump out of a tank. 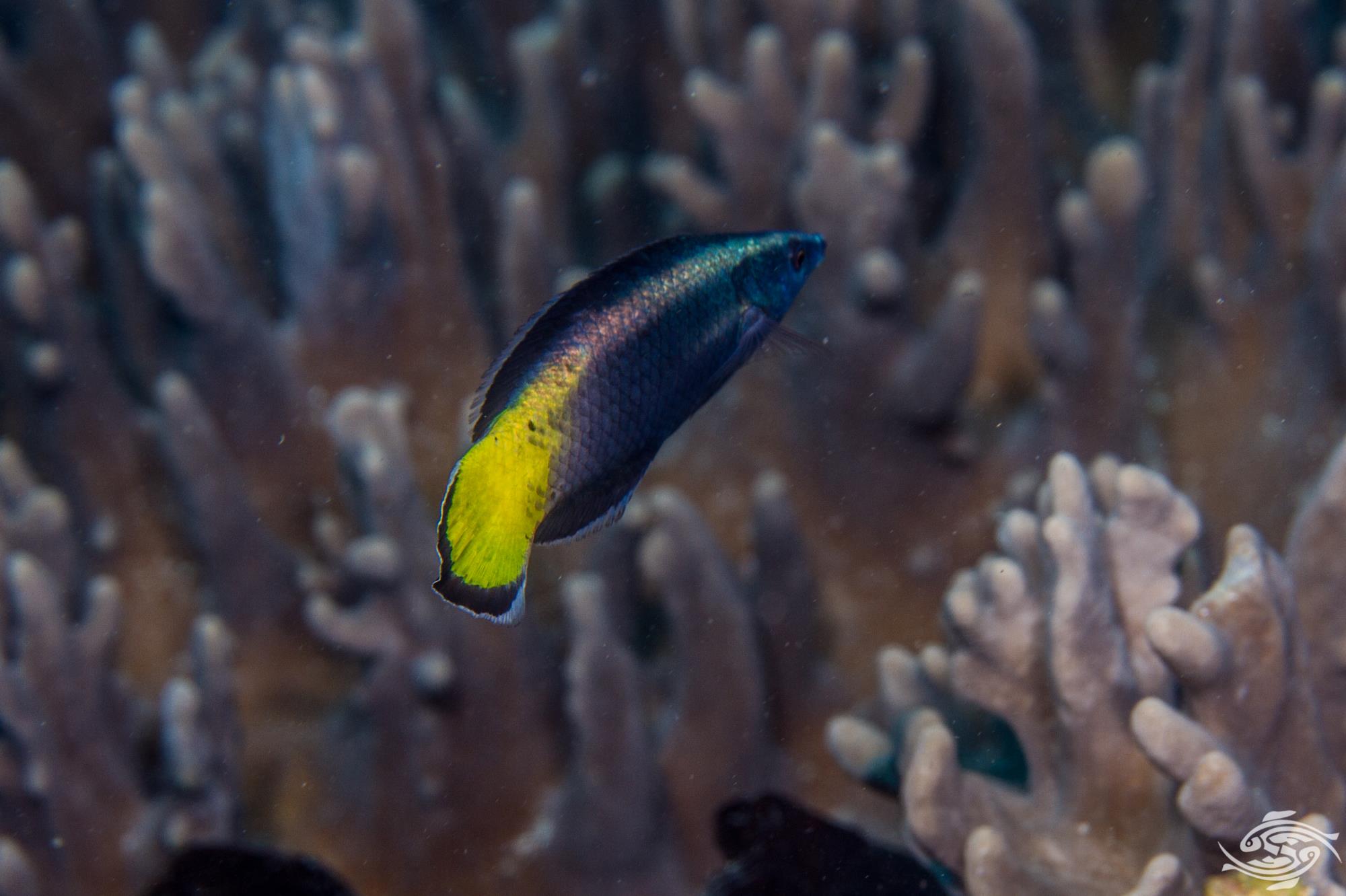 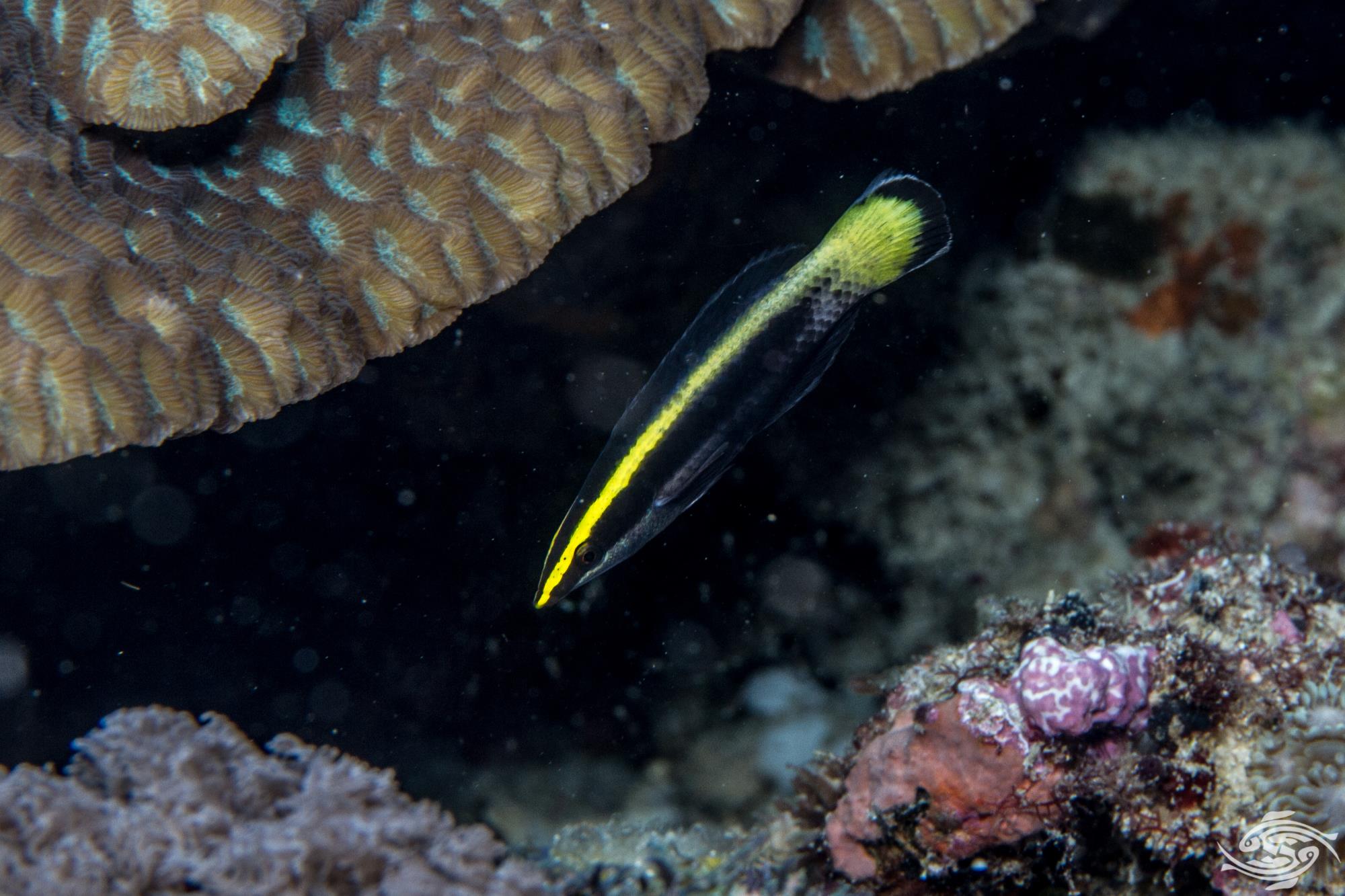 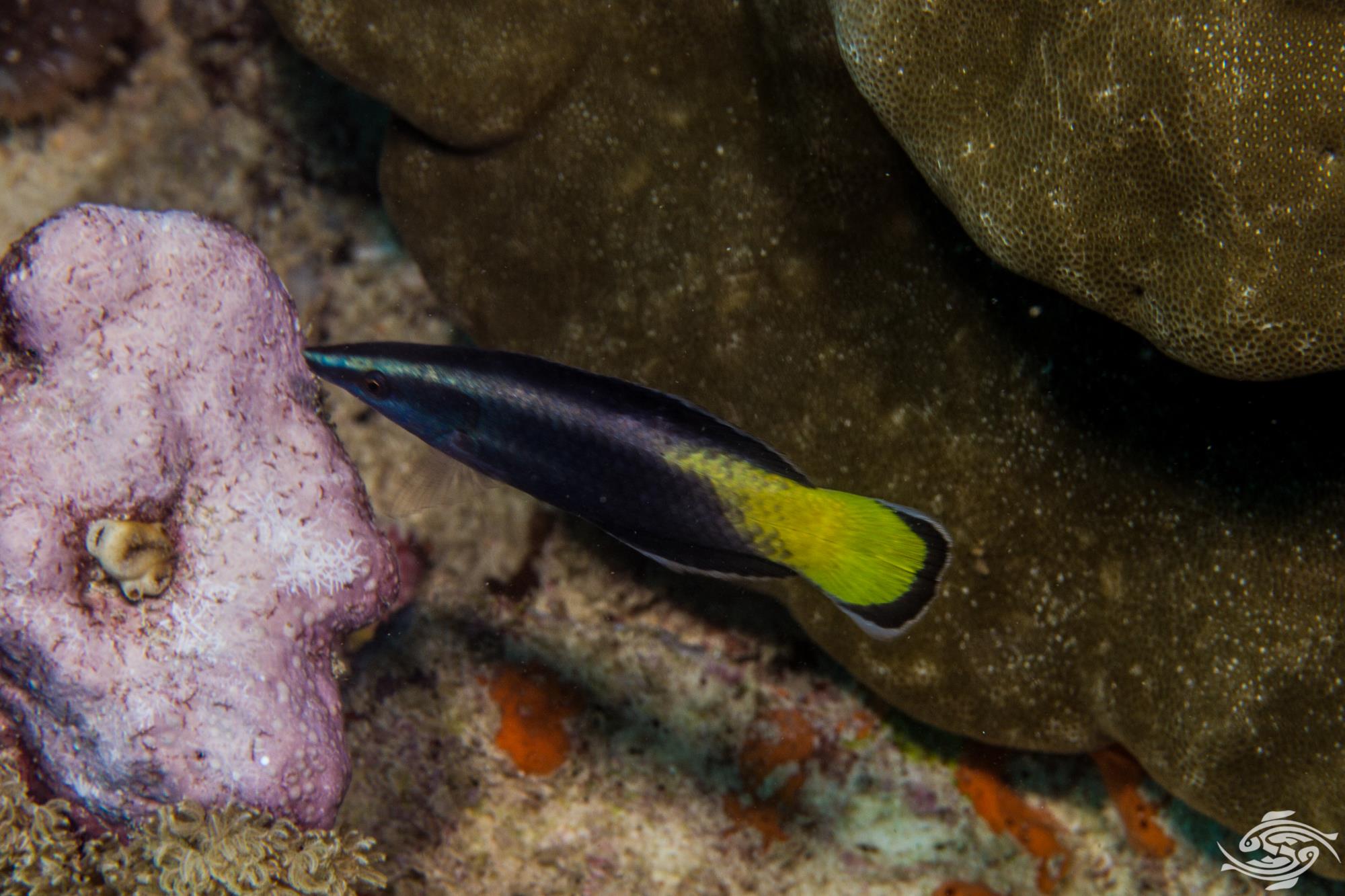