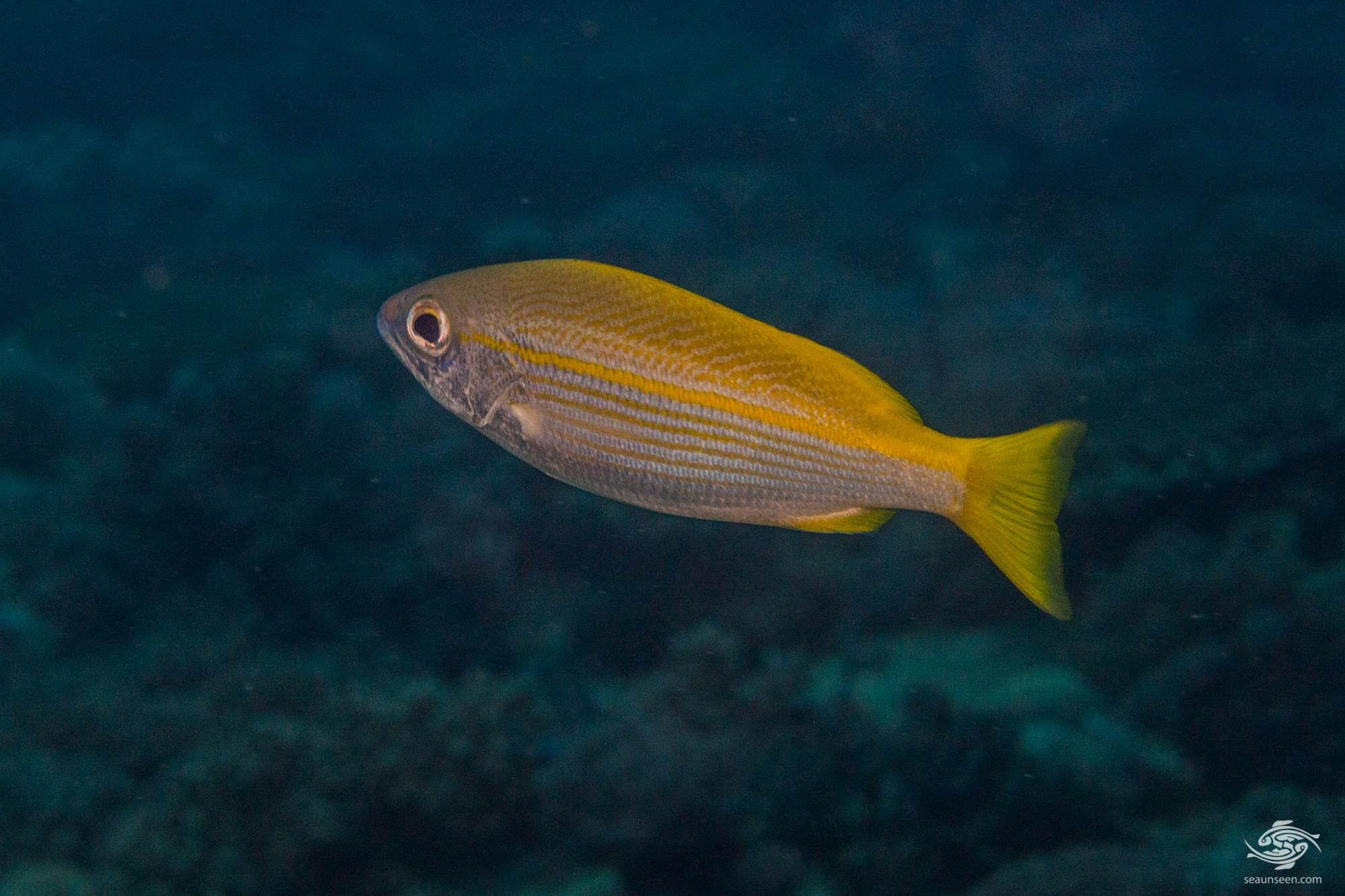 The The Bigeye Snapper, Lutjanus lutjanus is also kmown as the Bigeye Seaperch, the Golden Striped Snapper, the Red Sea Lined Snapper,and the Yellow Snapper. They are not that common on the Tanzanian mainland coast but with the halting of dynamite fishing in 2017, one is starting to see small shoals developing in late 2019.

Bigeye Snapper have a typical snapper shape and the body is a silver color with a light tint of pink on the facial area, becoming more prominent on the larger specimens. The dorsal area is yellow and there are a series of thin yellow stripes across the  body, fading slightly towards the bottom with one slighty thicker stripe in the upper body. The  fins are yellow and overall they are not an unattractive fish. The largest specimens we have seen have been around 20 cm but they grow up to 30 cm. 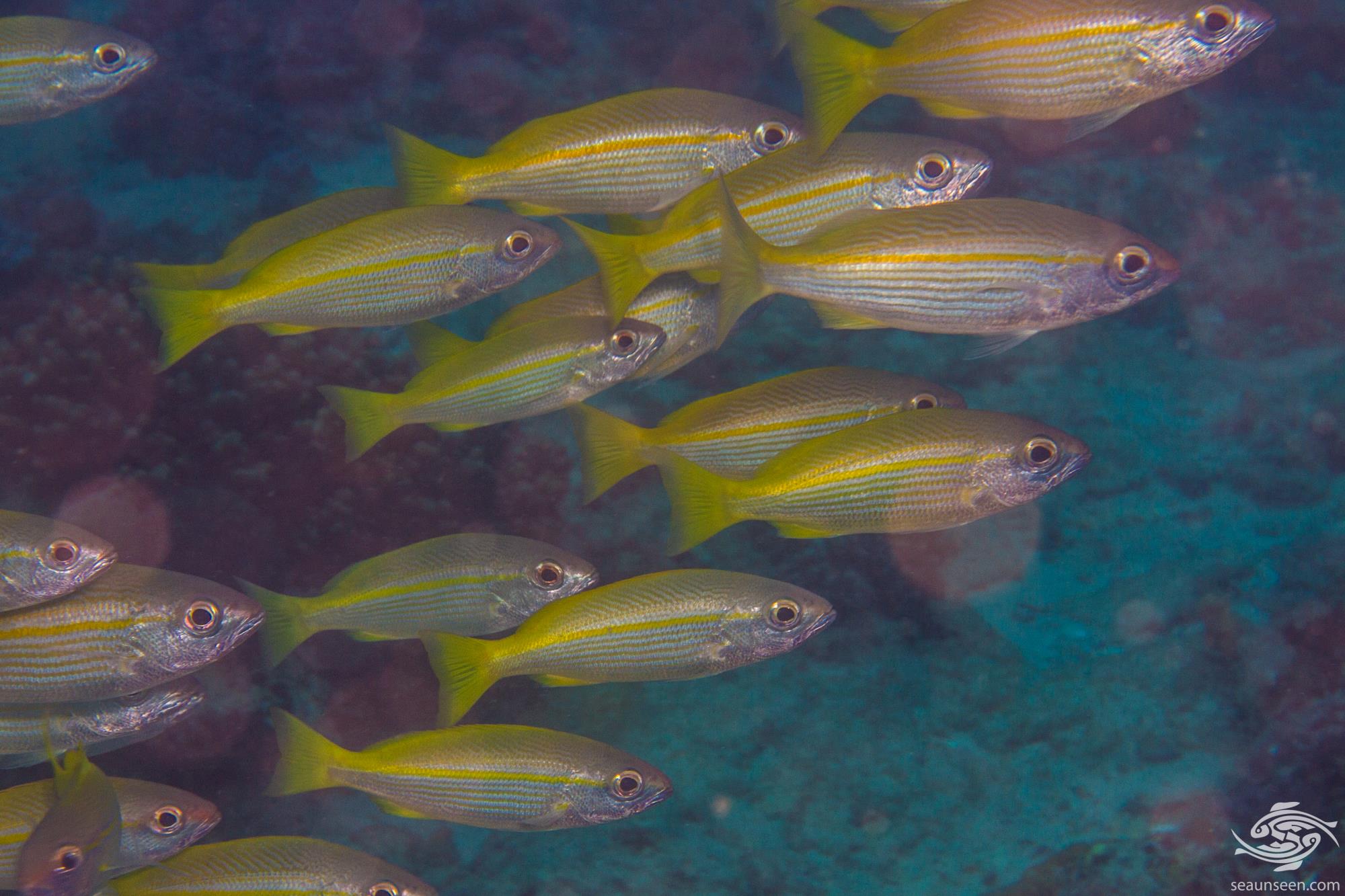 BIGEYE SNAPPER IN THE WILD

Bigeye Snapper are usually seen in small shoals of fifteen to twenty fish on the Tanzanian mainland, but in the Marine Park on Mafia Island, larger shoals are seen and they will often shoal with other species of snapper. 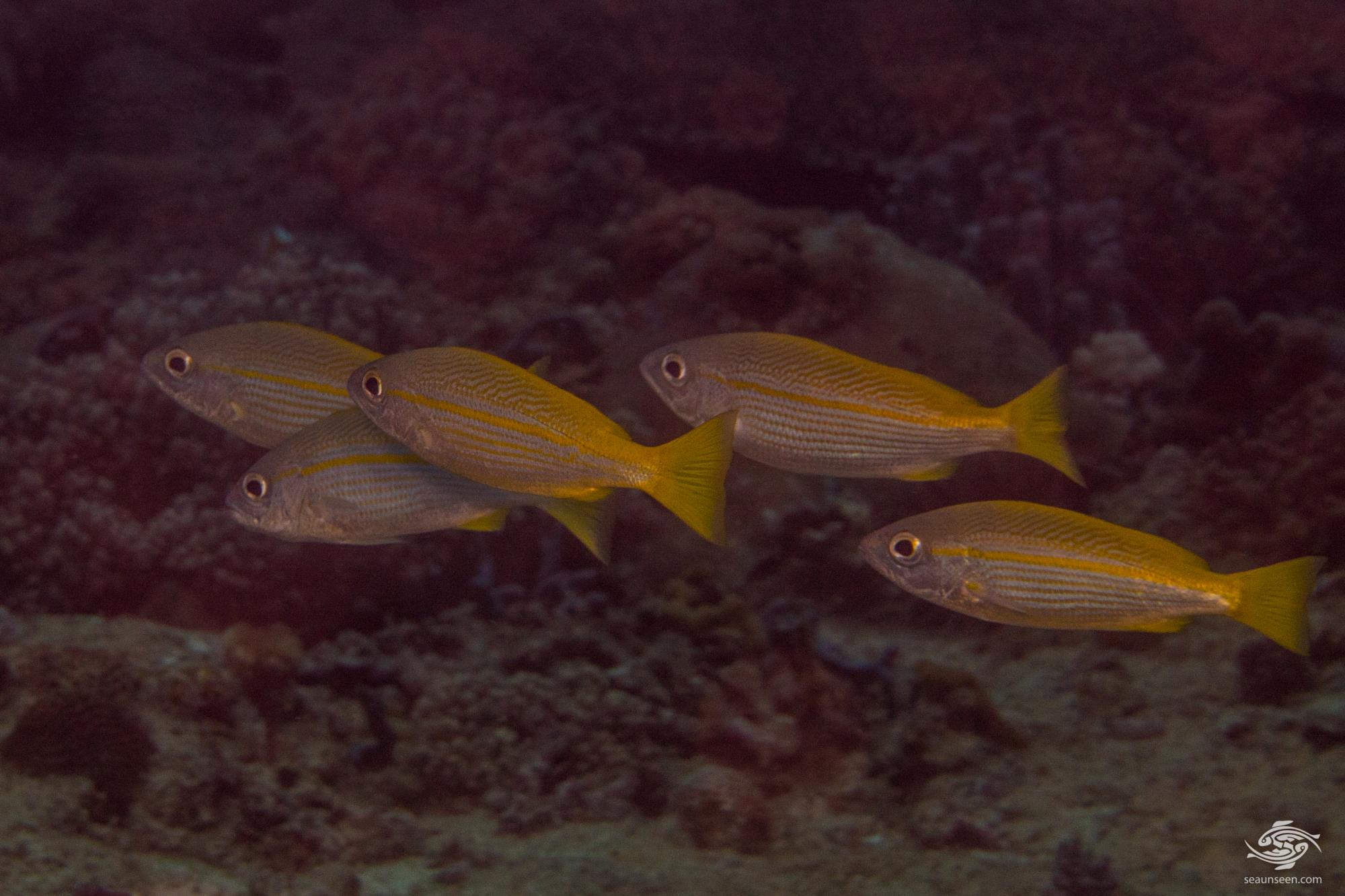 Bigeye Snapper are widely distributed across the tropical Indo-Pacific, from East Africa up to the Red Sea and across to the Ryukyu Islands in southern Japan and down to North Eastern Australia and Samoa.  We have seen them on reef slopes down to depths of approximately 20 meters but they have been recorded as deep as 96 meters. 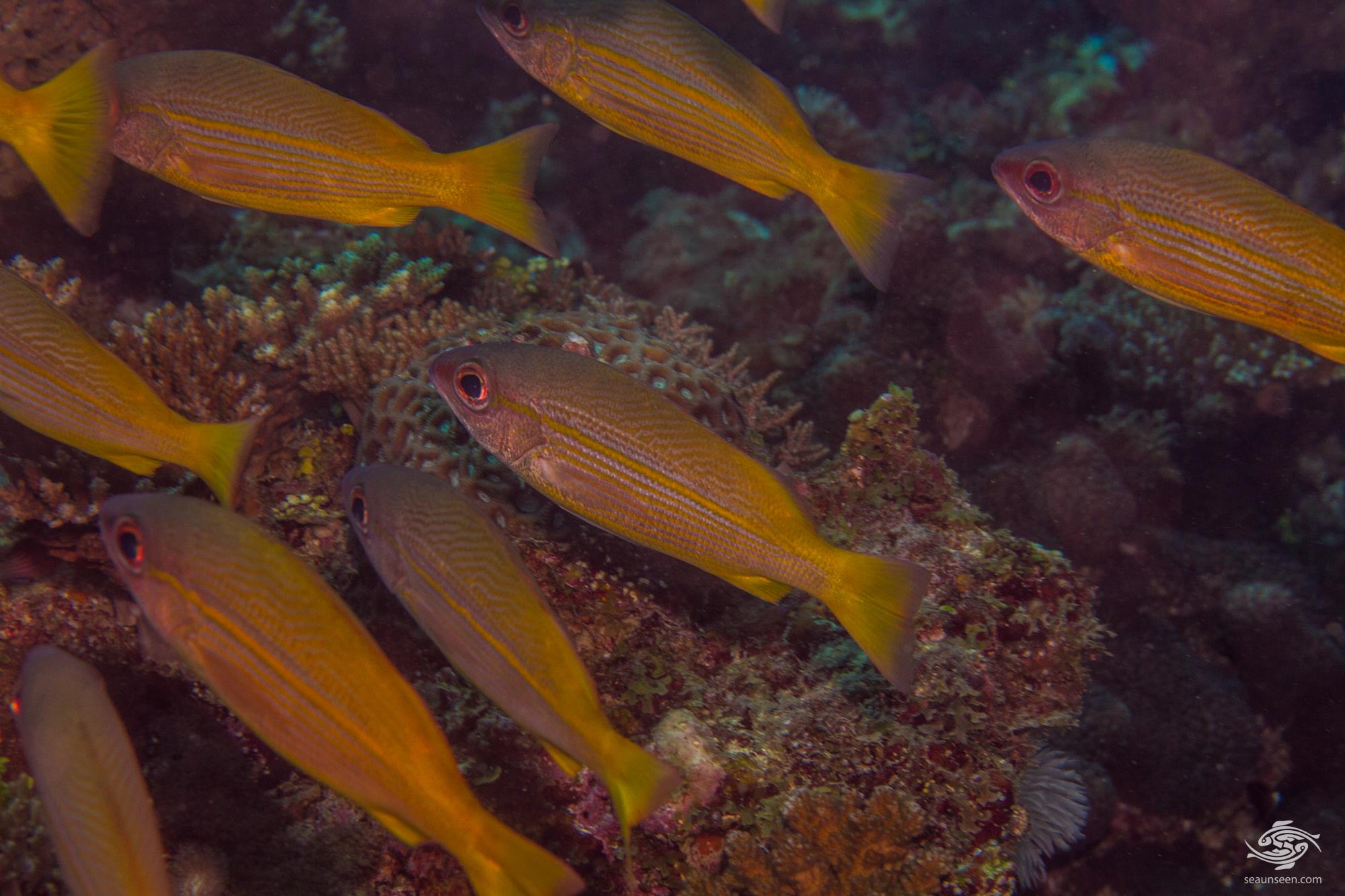 Bigeye Snapper have a varied diet, feeding on fishes and crustaceans. Their diets vary with  locally available prey items.

Bigeye Snapper reach maturity at a size of 12 cm. They have been known to live for up to 11 years. The adults group spawn in large numbers and the eggs which are round and transparent float off in the current. Spawning in East Africa has been recorded in November.  After undergoing a pelagic stage the juveniles make their way back to the reefs. Group spawning usually takes place in areas of strong current. 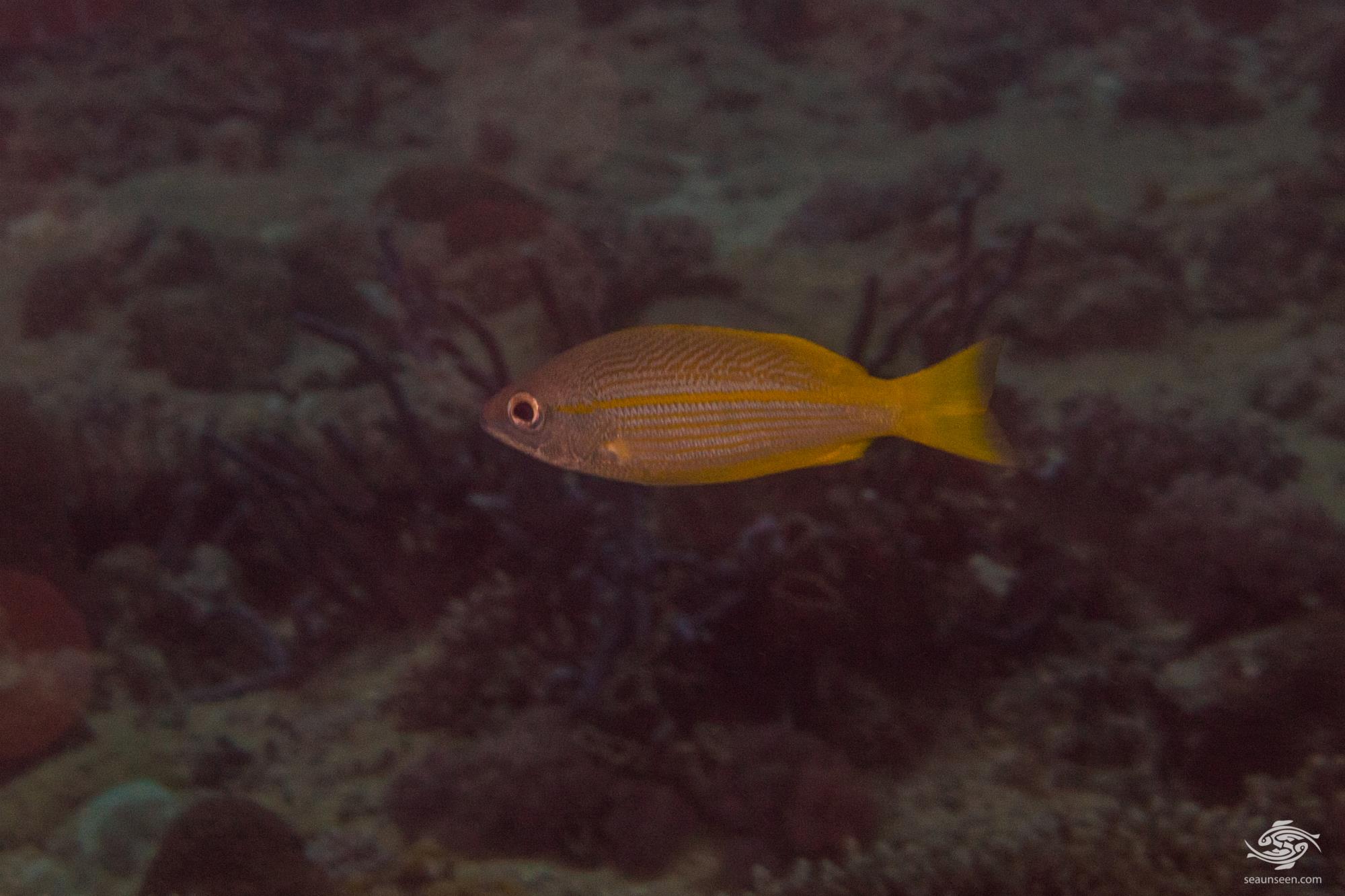 Bigeye Snapper are exploited commercially.  In Tanzania they are caught by fishermen in traps and on lines and are netted. They are usually sold fresh and are a highly sought after fish in restaurants. They are tasty to eat.