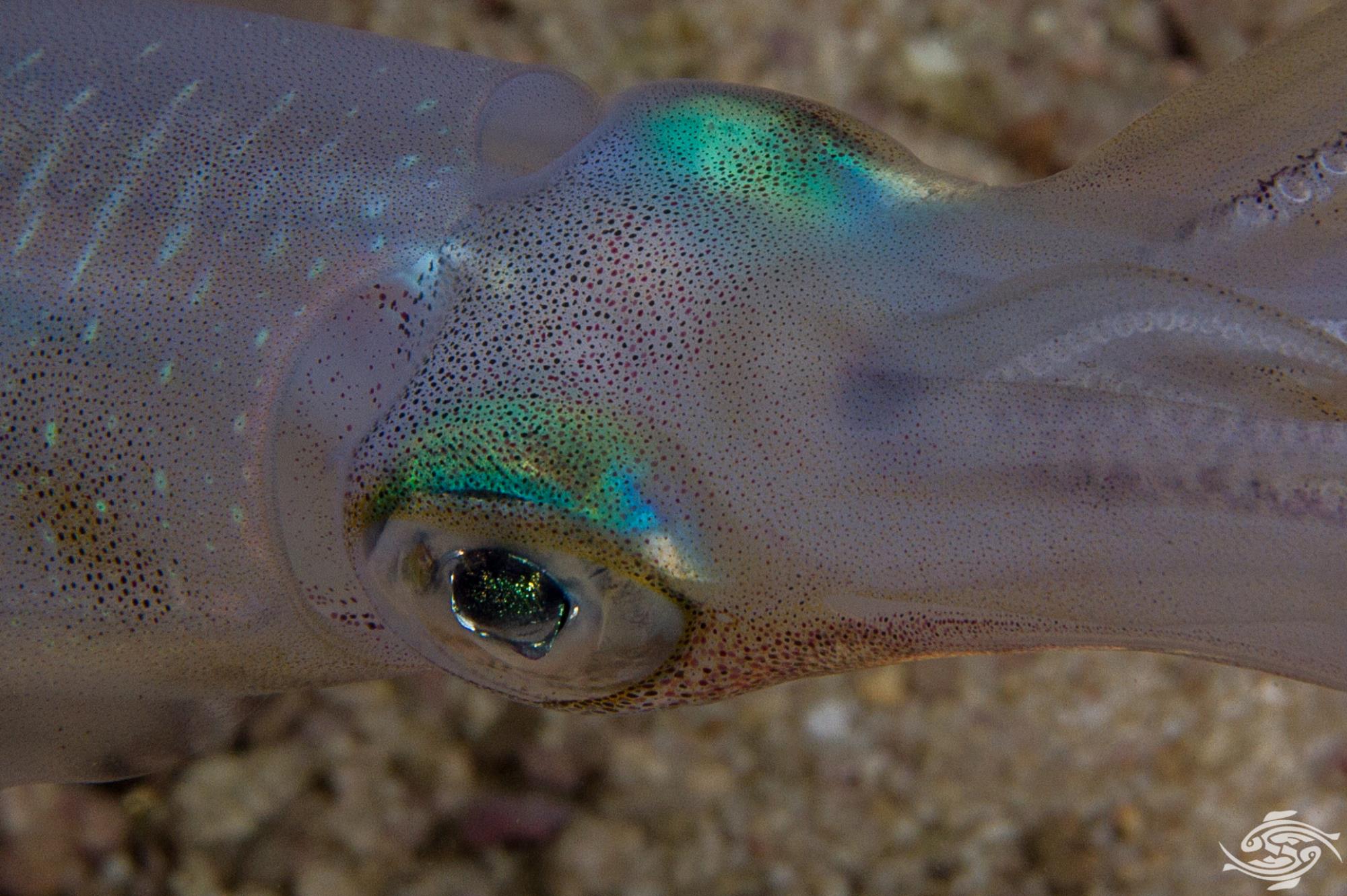 The Bigfin reef squid, (Sepioteuthis lessoniana) is also known as the Oval squid. They obtain their name from the fin which almost completely circles their body.  This gives them a superficial resemblance to cuttlefish. They have the fastest recorded growth rates of any marine cephalopod and as a result are a commercially important species.

The mantle or body of the bigfin reef squid is cylindrical in shape, tapering to a rounded point at the rear. Large distinctive muscular fins which give them their name are situated around the mantle and these are used for propulsion.  The eye is proportionally large, giving them good night vision and is covered by a secondary cornea .

Eight arms of varying length taper off the head. The arms contain suckers that decrease in size as the arms taper. In addition to the arms they have two longer tentacles which are used for grabbing prey.  These contain a large number of tentacles concentrated on the ends to hold the prey. This action can be seen in the video below. They have a sharp beak along with toothed tentacles near the mouth.

The upper surfaces are covered with large chromatophores which give them the ability to change color. They additionally have iridophores which produce the metallic reds and greens as well as leucophores which reflect back ambient light. Their colors vary greatly and are usually not uniform.

Even when in translucent white mode, which can be seen in the images below, there are green shades and light brownish dots. Interestingly when born they have the ability to use these organs to change color. They lack photophores and are therefore technically not bioluminescent. 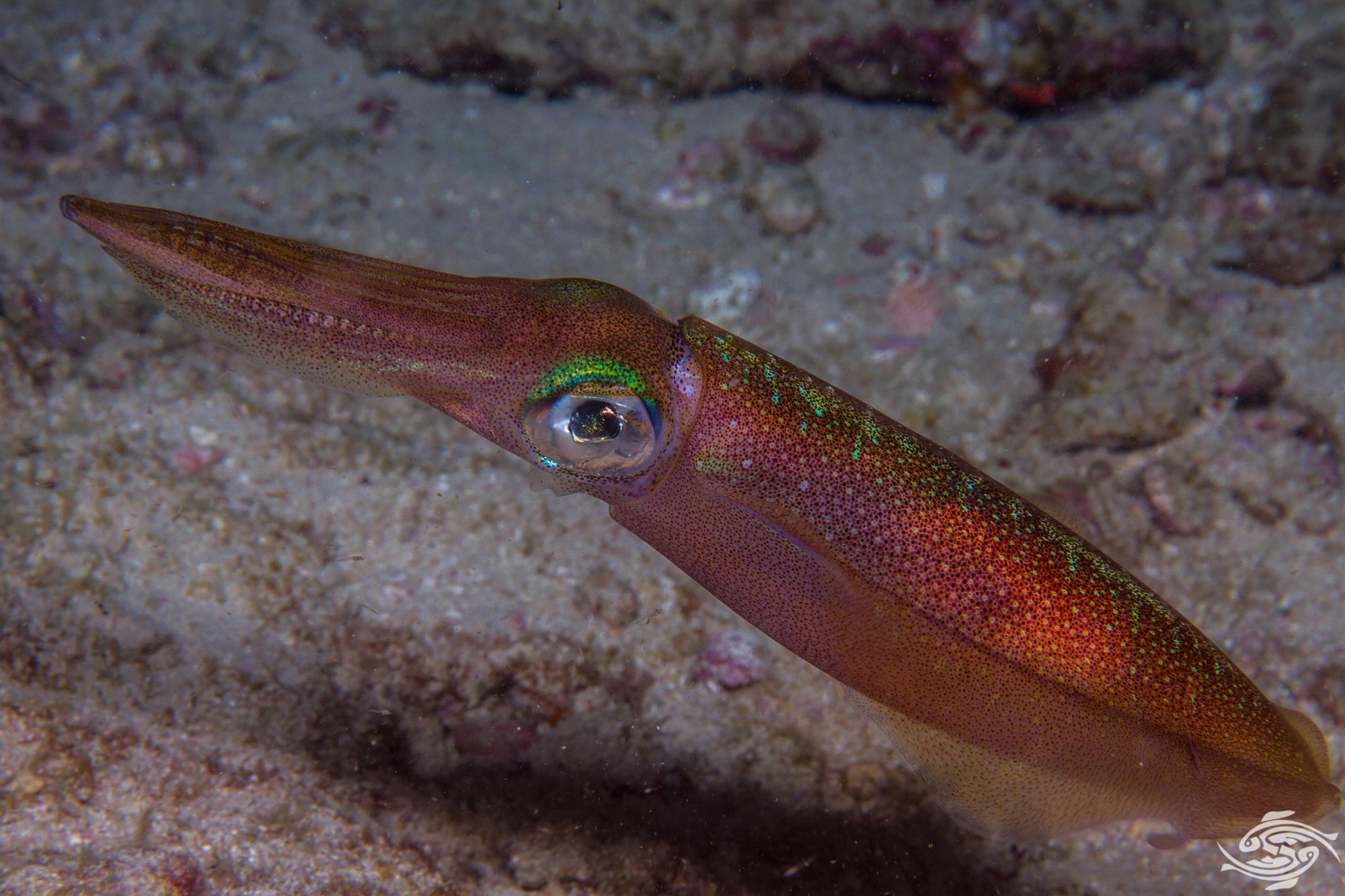 In Tanzanian waters during the day one often sees large shoals of bigfin reef squid, usually in mid water. The shoals can number several hundred squid and are made up of individuals of varying sizes. Often the shoal will move in on a group of divers and some of the smaller individuals will drop to the bottom and come in within ten to eight meters to inspect the divers, darkening their coloration to camouflage themselves. Any attempt to approach them and the entire shoal shoots off. They seem to have an inherent curiosity to see what the divers are. It is usually very difficult to get close to them during the day.

At night they seem to split up and I have never seen them in large shoals at night. Sometimes groups of 4 to 6 may be seen together. I have sat on the back of an anchored boat at night with a bright light shining into the water. If one watches carefully, the bigfin reef squid hang out in the shadows and wait for small fishes to come in on the light. They dart in and grab the fish and shoot out into the shadows again , repeatedly darting in to feed. Clearly they are able to exploit the light to feed.

A similar thing happens when diving at night and if there are small fishes around attracted by the lights they will shoot in and grab their prey and shoot off again. If one dives with an extremely bright light such as a Bigblue VL30000P  and there are many small fish around, then they will actively come into the light and feed in front of you and you can get quite close to them.

I have the smaller version of the light, a 15000 lumen model and this does not happen with it. So a very bright light definitely encourages them to come closer. The video below was shot with the VL30000. The more stable and constant one keeps the lights the better it seems to work in attracting the squid. Try and avoid moving the lights around a lot and be patient and if they are in the area they will arrive. 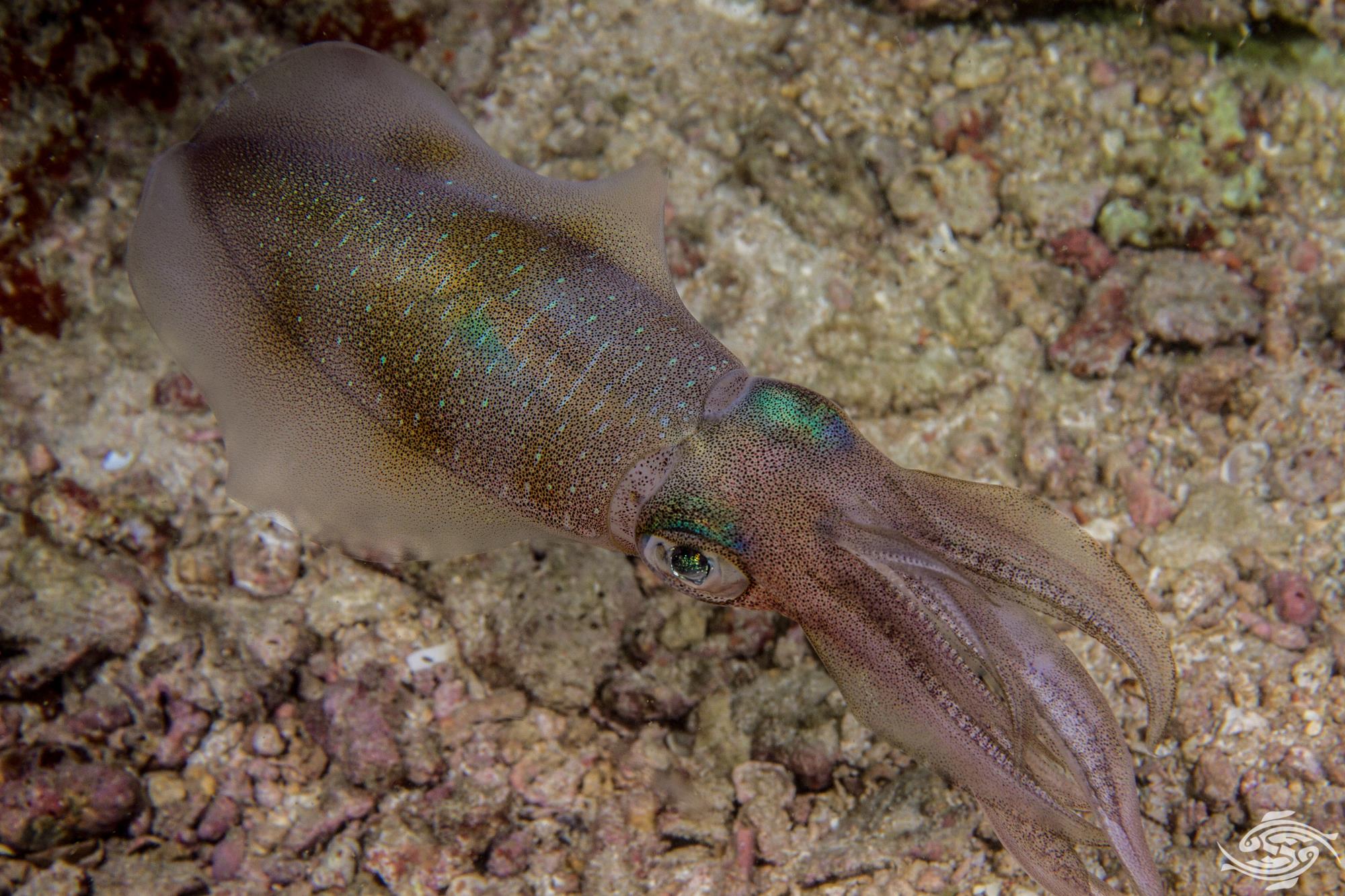 The bigfin reef squid are found across the Indian Ocean and West Pacific, including the Red Sea, north to Japan and south to Australia and New Zealand. They are primarily a shallow water species but have been found as deep as 100 meters. 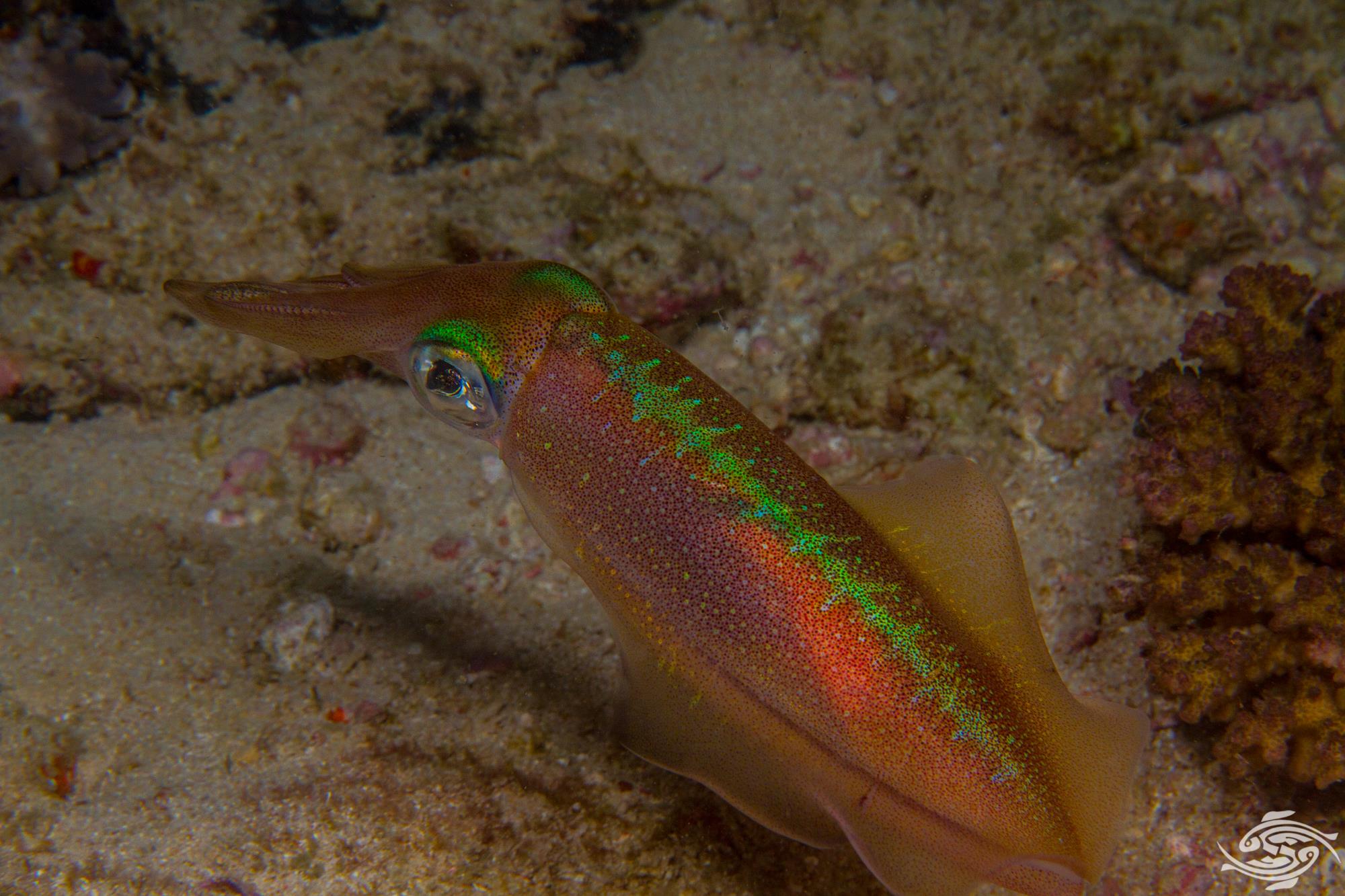 Bigfin Reef squid primarily prey on small fishes, prawns and small crustaceans. They are preyed upon by gamefish such as Tuna as well as the larger reef predators and Dolphin. 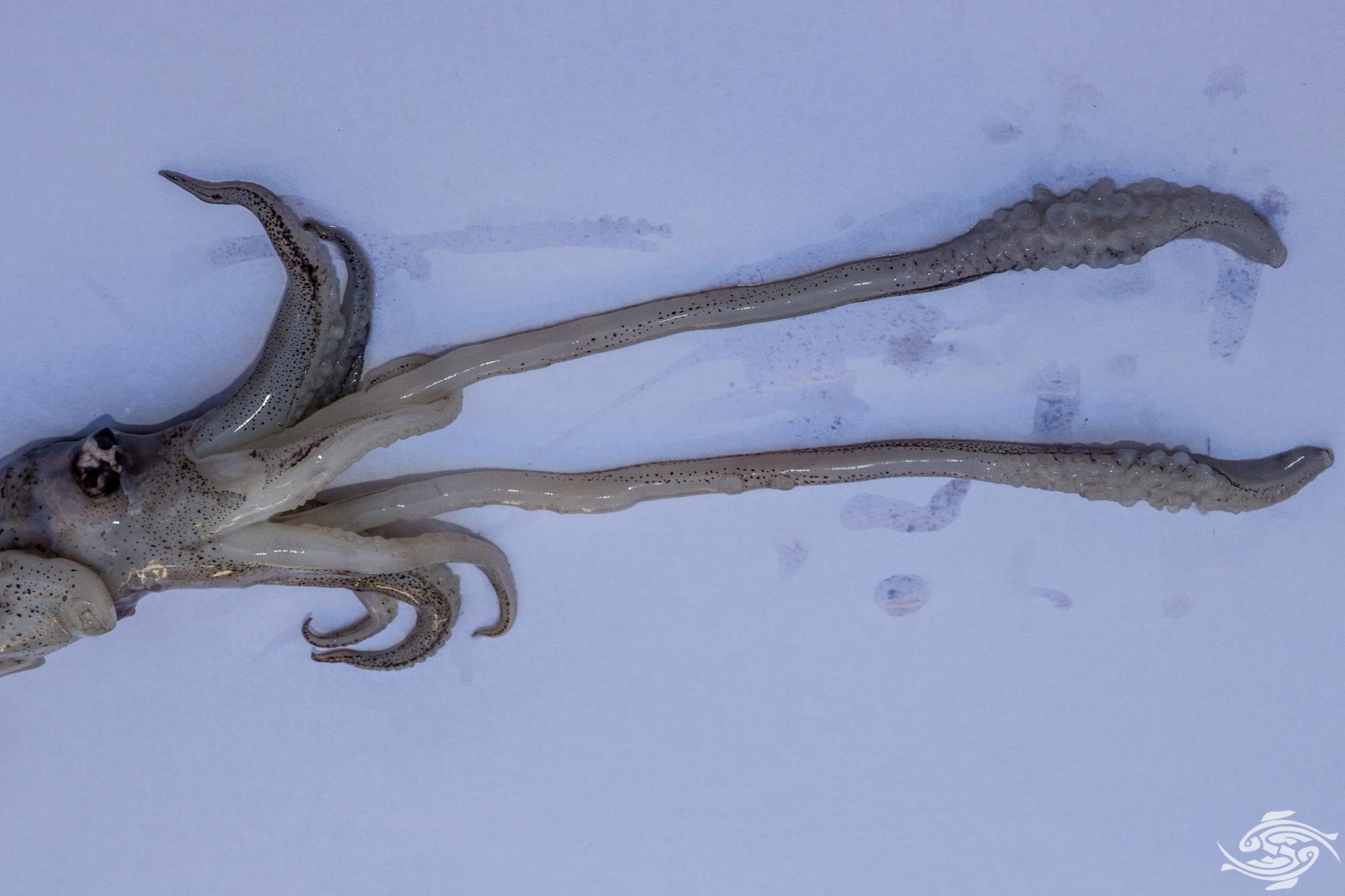 They dart rapidly at their prey and seize it with their tentacles. As can be seen in the image above, the end of the tentacles contain large numbers of suckers which grab onto the prey. The prey is then pulled into the mouth area by retracting the tentacles. The arms are then used to hold the prey and the sharp beak bites off small pieces off the prey. In the video below you can see the squid struggling to wolf down a slightly larger fish. 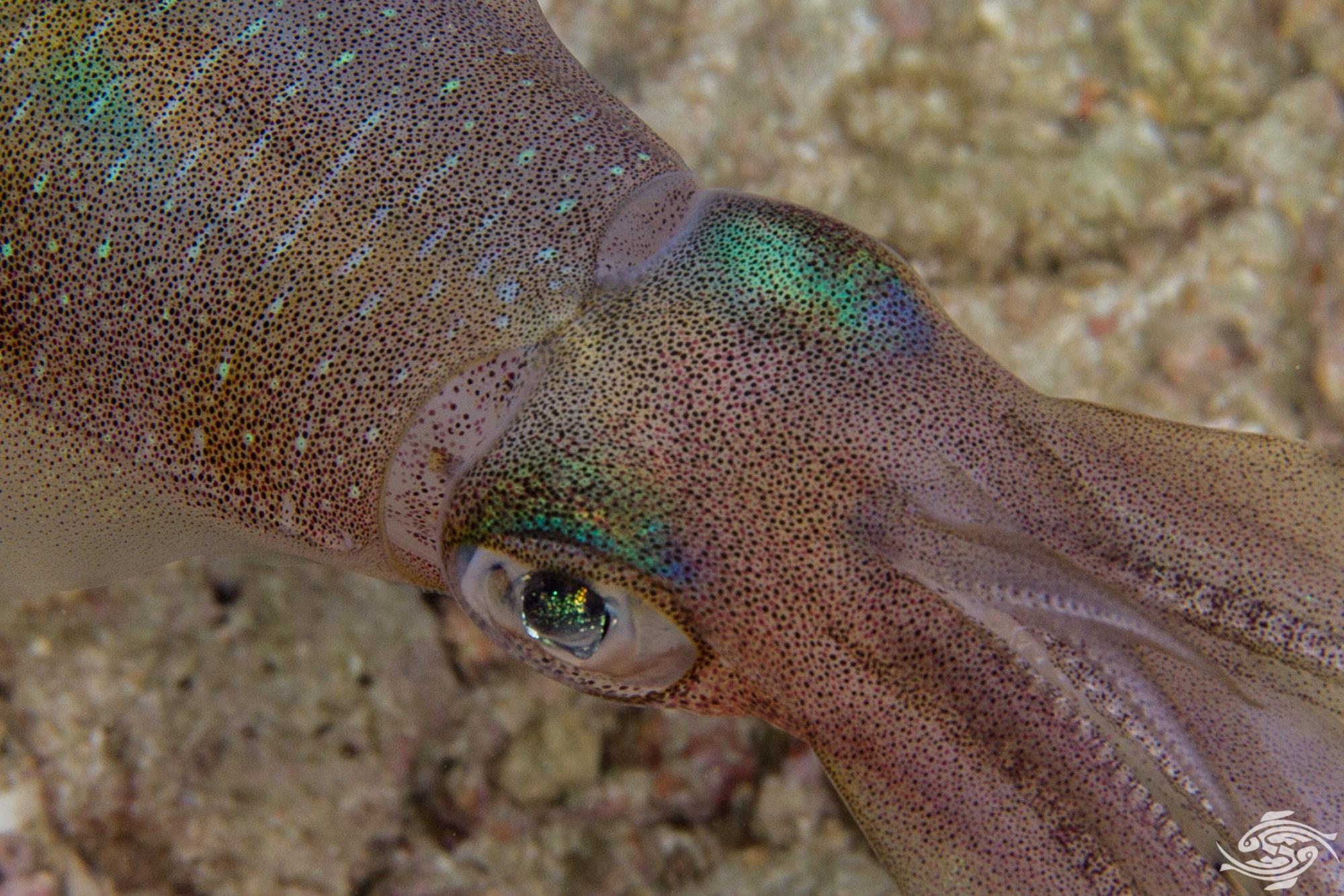 Bigfin reef squid have elaborate courtship rituals which include specific coloration patterns and swimming behaviours.  The males use a specialised arm to place a sperm package close to the mouth of a female. Mating usually occurs before egg laying. 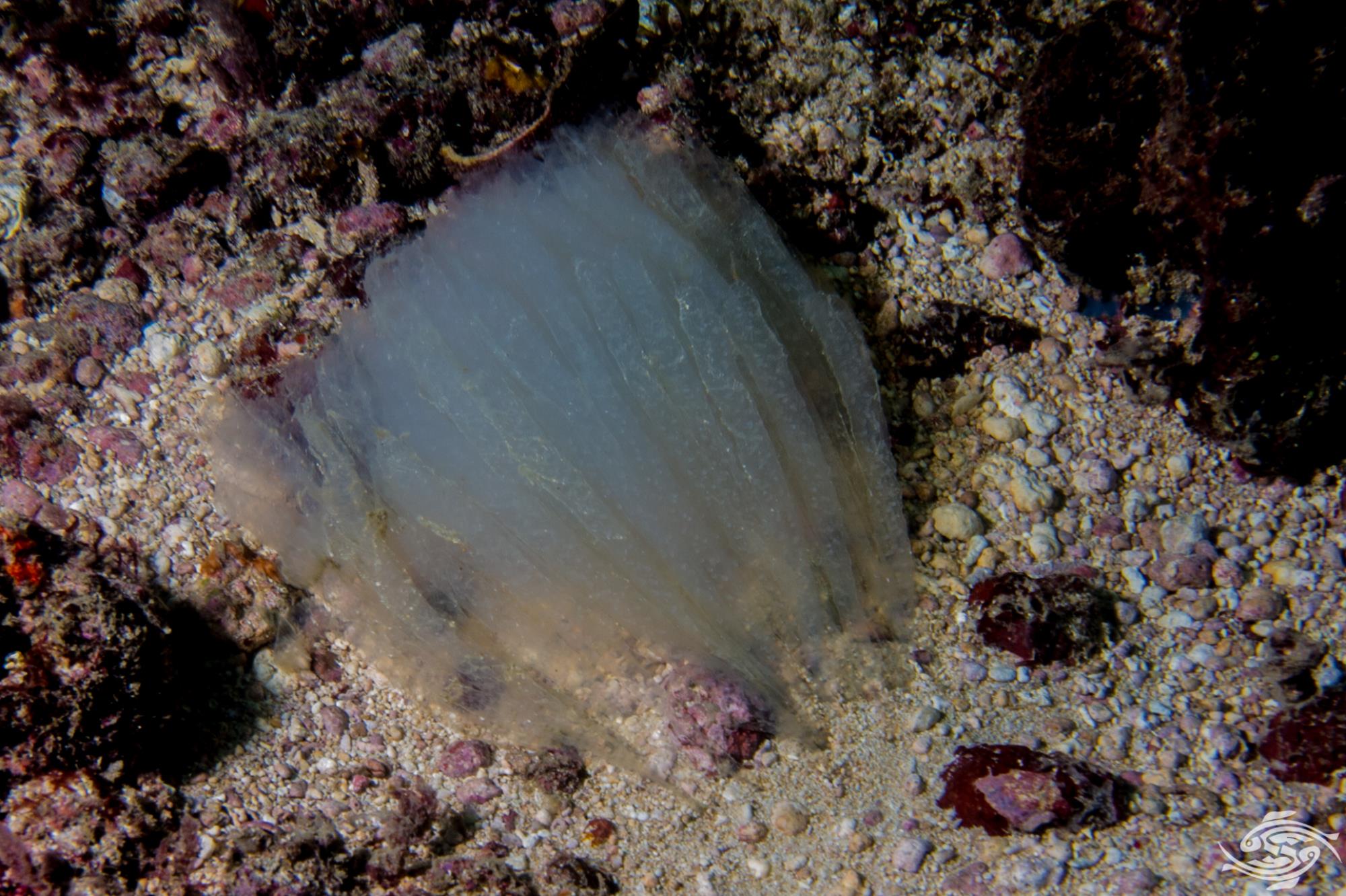 The eggs laid in gelatinous white strands of 3 to 8 eggs and are attached to the substrate.  They hatch after three weeks and are fully formed. The females die quite soon after they have finished laying their eggs. The life span of the bigfin reef squid is relatively short, with a maximum of around 300 days in captivity. 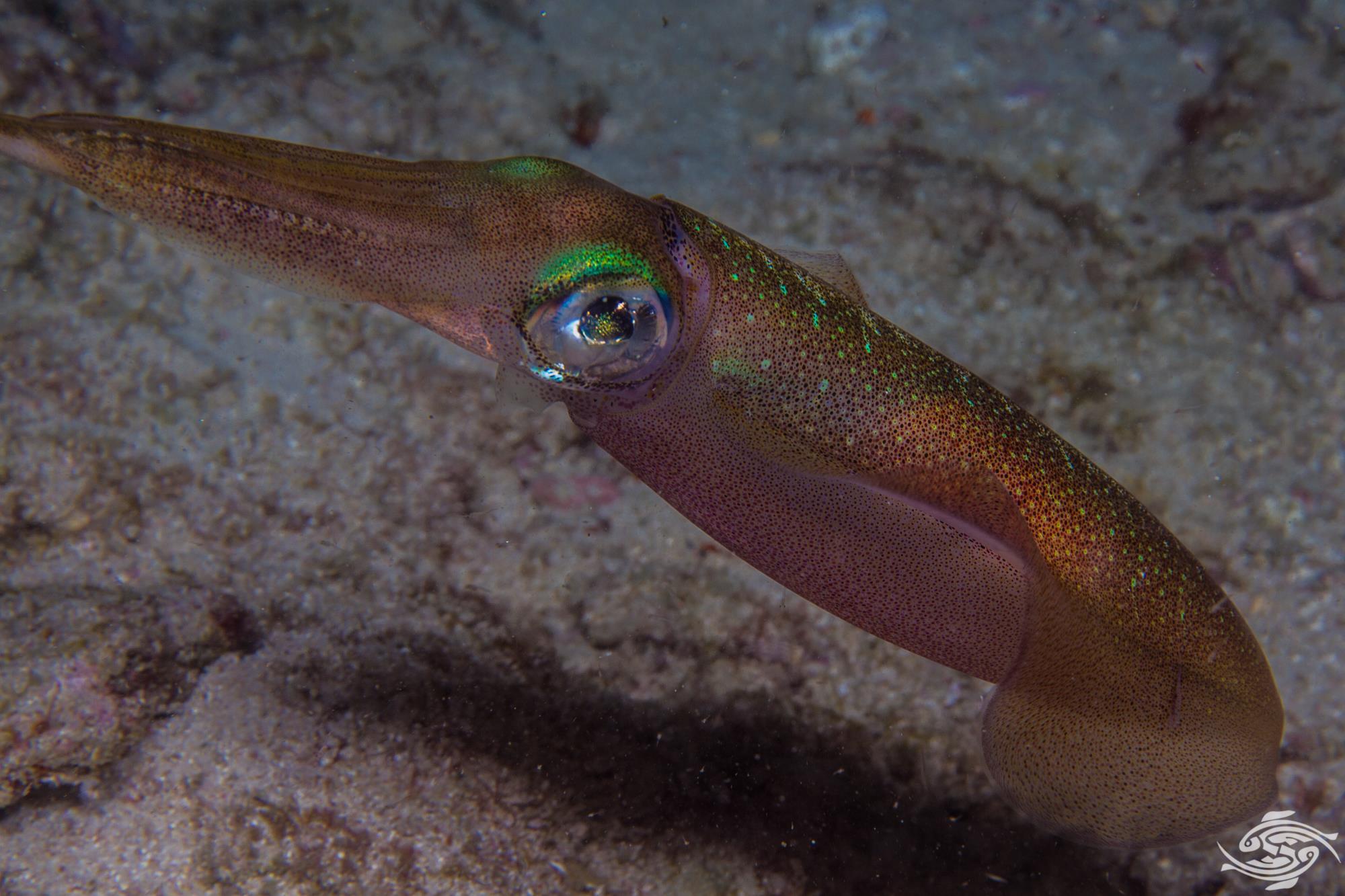 Bigfin Reef squid are an important commercial species and are caught by netting, trapping and jigging at night while using lights as an attractant. They are usually sold in restaurants as Calamari and when cooked properly make delicious eating. 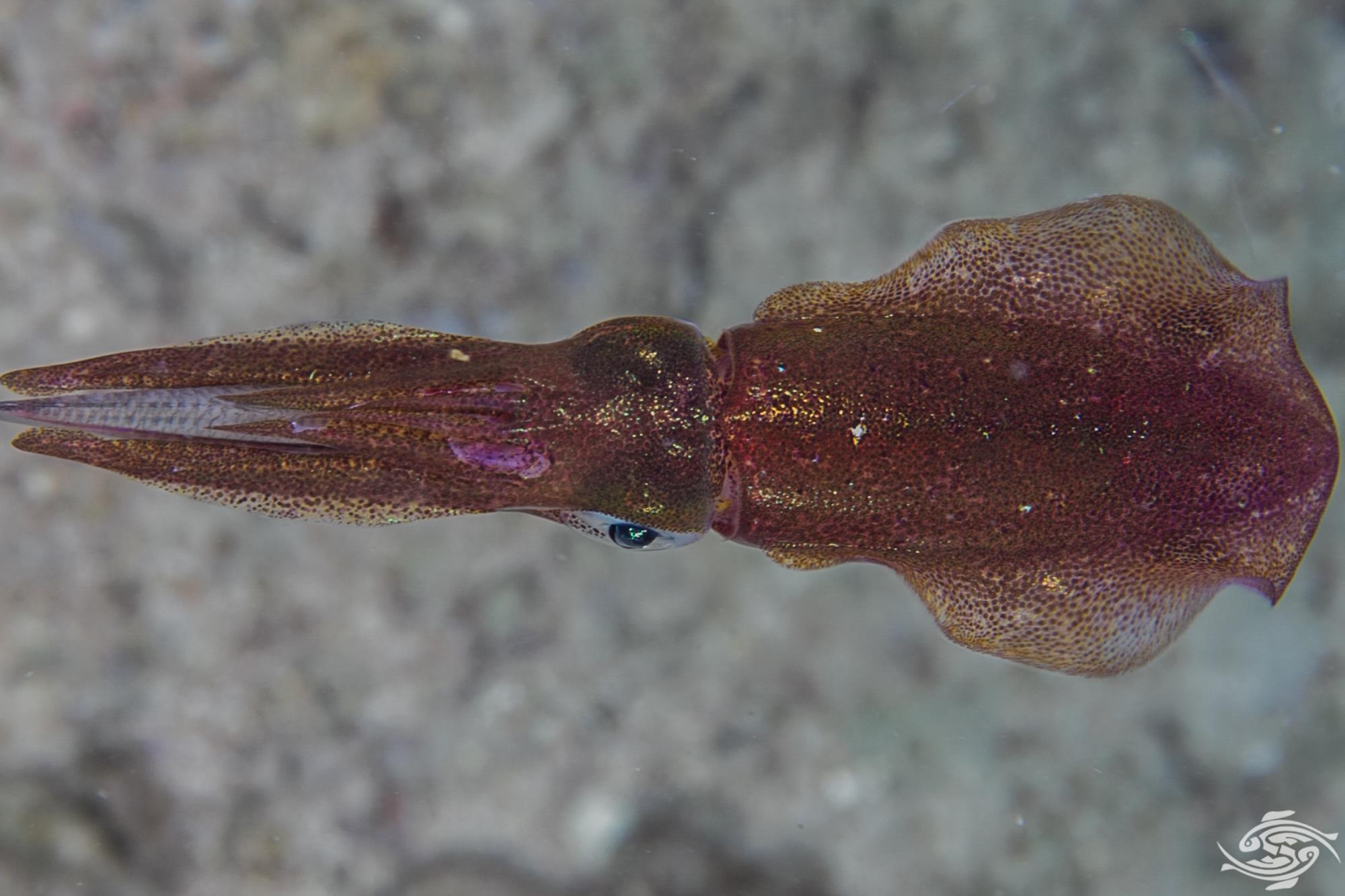 As a rule they are usually only kept in large public aquaria for research purposes and several generations have now been captive bred by researchers.  Because of their rapid weight gain they are thought to be a possible candidate for mariculture. 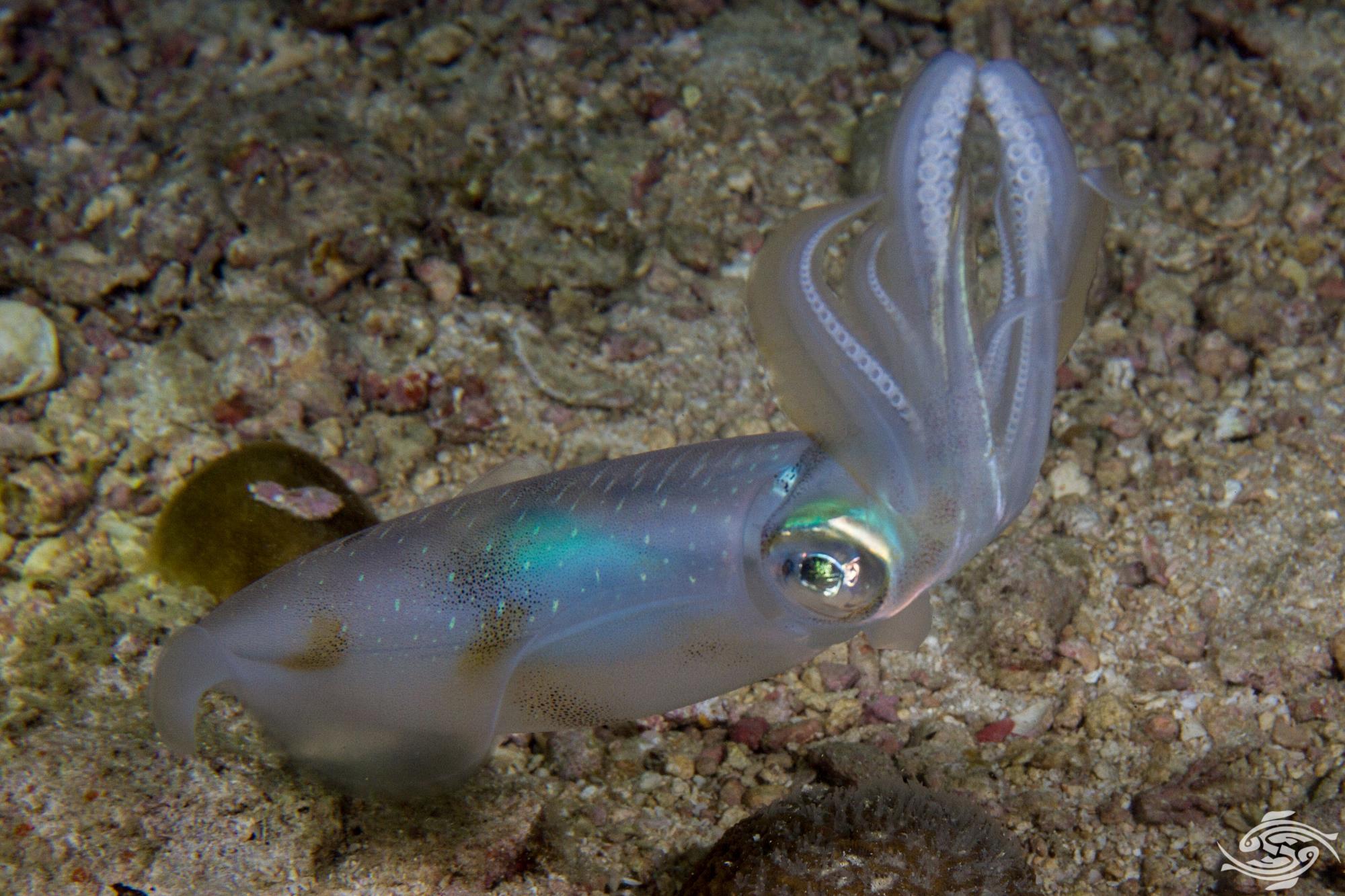