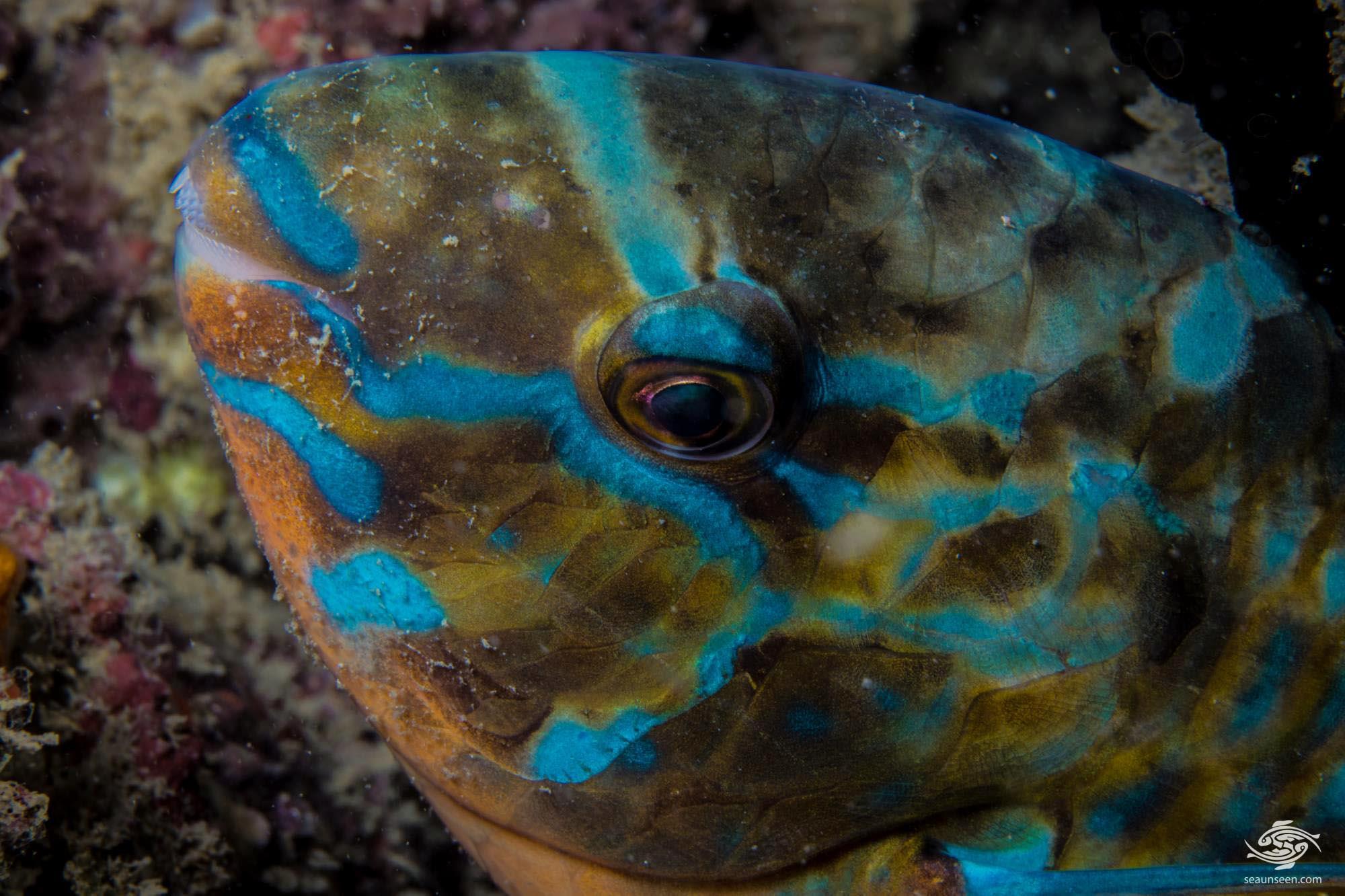 Within the various species of  Parrotfish which are part of the Labridae family there is considerable divergence in looks between the juveniles and the adults. Some females based on social cues also change into so called Supermales which are very colorful. Additionally there are regional variations  in looks which combined with their ability to change their colors particularly at night to some degree, creates a large amount of confusion as to which is which.

Most have been described on multiple occasions in various areas with this species which is one of the few that do not vary greatly between juvenile and adult having been described on over thirty occasions by different scientists in different parts of the world.  It can often be exceedingly difficult to determine which species is which and ultimately only a DNA test might provide one with conclusive identification with some specimens. 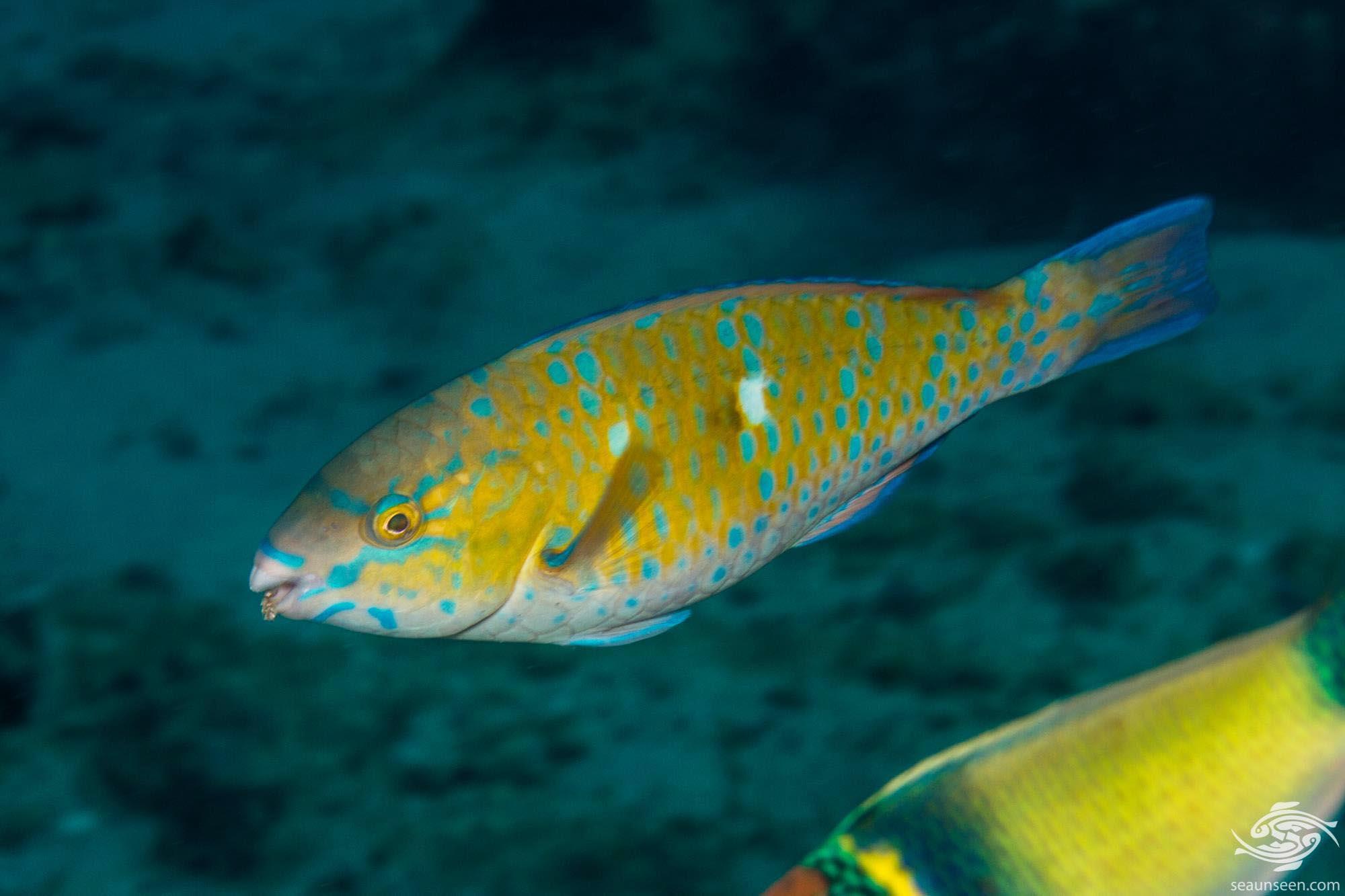 With the smaller  juveniles there is a white patch central mid body which disappears as the fish matures into an initial phase female which is pictured below. In some parts of the world at this stage marked blue bars form on the sides of the body, but we have never seen this in Tanzanian waters. 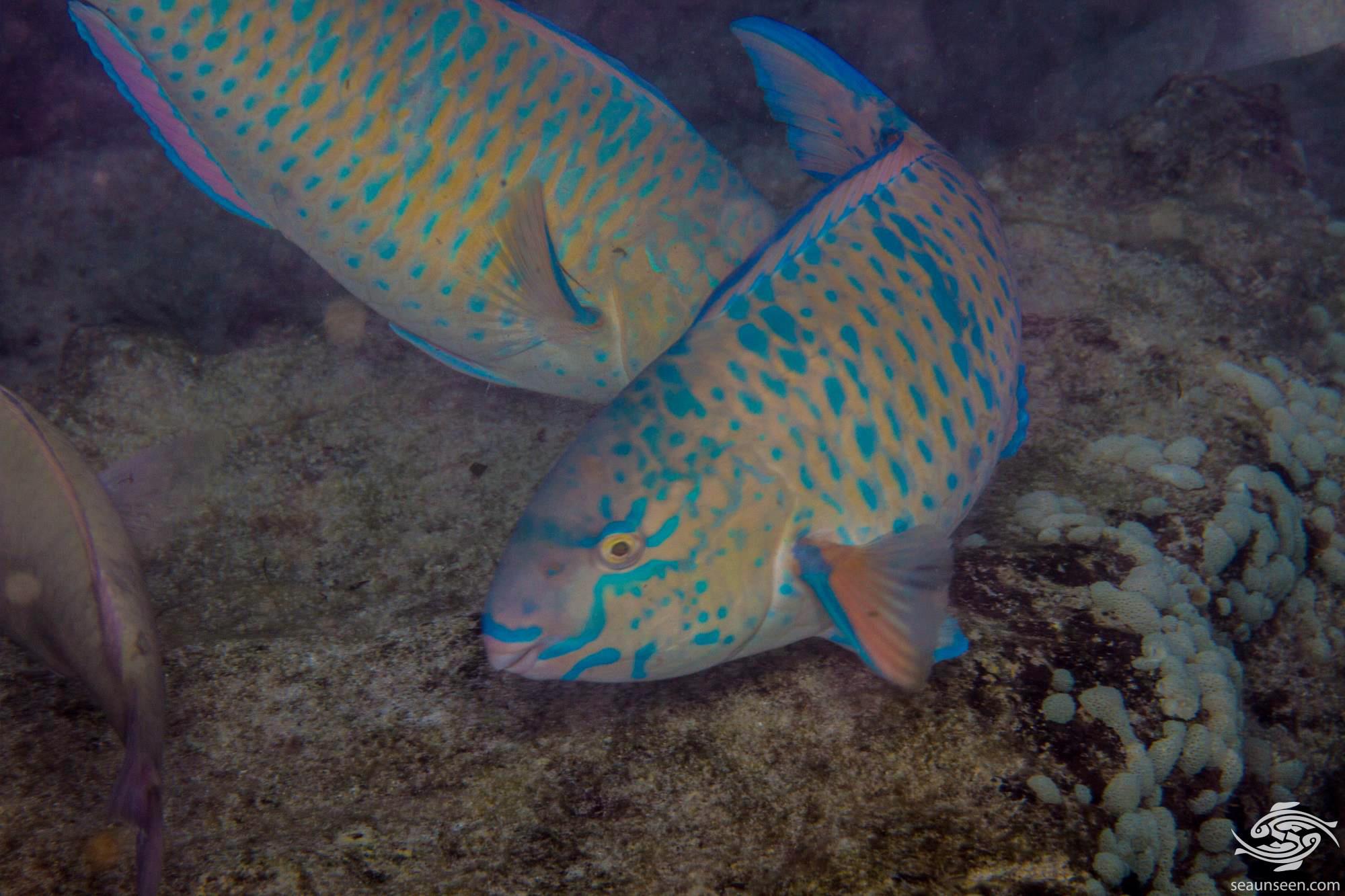 Terminal phase Blue-barred Parrotfish males pictured below have more blue scales on them and blue lines begin forming in the cheek area. 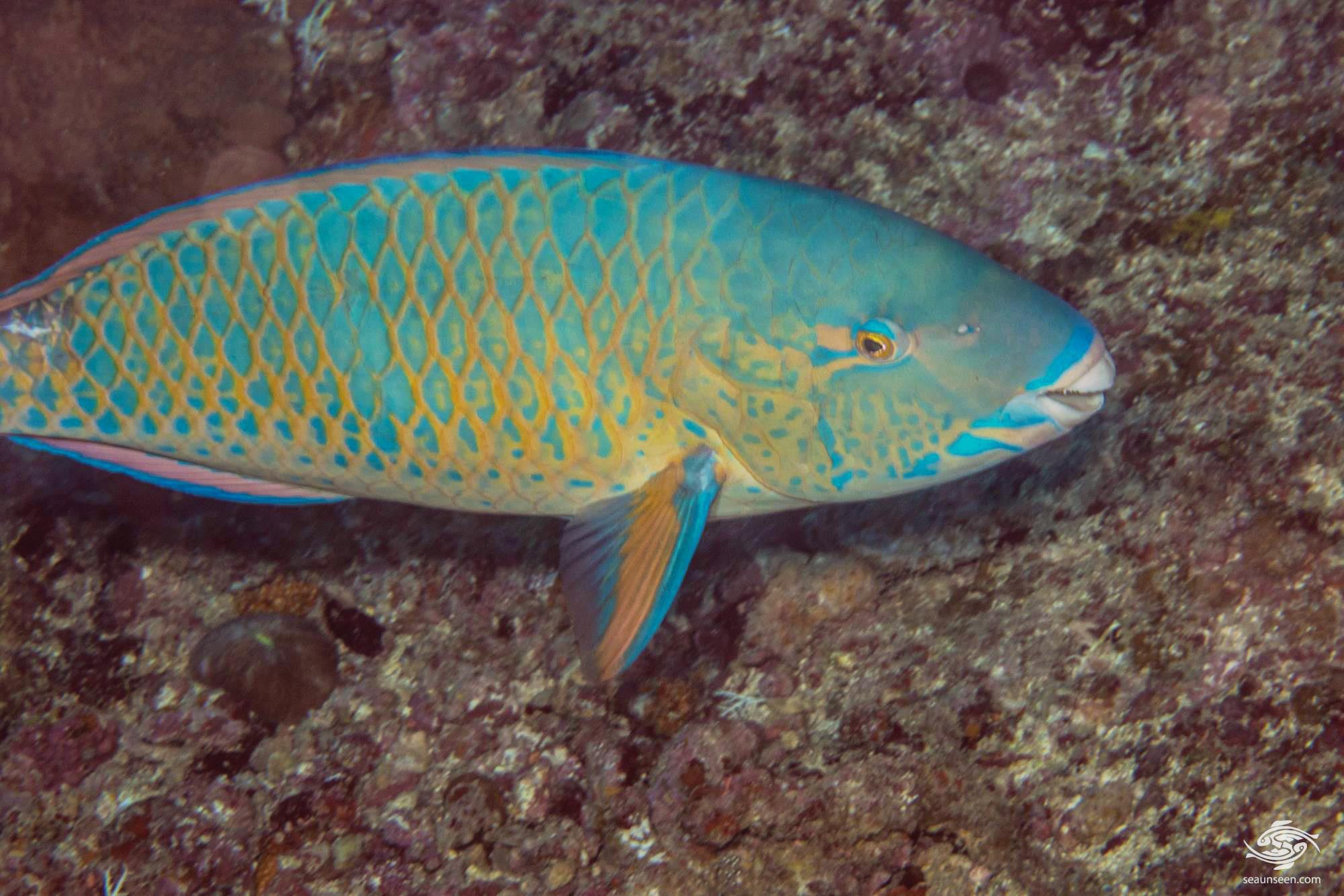 BLUE-BARRED PARROTFISH IN THE WILD

As a juvenile the Blue-barred parrotfish often feeds on the shallower reefs at around 10 to 15 meters with groups of Rabbitfish , Goatfish, Wrasse and smaller Surgeonfish.  Occasionally they are seen in small loose shoals.  As they mature so they seem head to turbid waters, often fairly shallow around three to five meters. Off the west coast of Mafia in the Mafia channel we have seen large Initial Phase specimens of around 40 to 50 cm in groups of four to five females, sometimes accompanied by a male and sometimes not. Visibility in these areas is low, around three meters. On the deeper reefs we often see them solitary.

At night as pictured below they sometimes sleep in a secretion and sometimes do not.  It seems to be about 50/50 in this regard. This may have something to do with the light of the moon or perceived threat levels. Unusually for parrotfish they do not have a major color change at night. 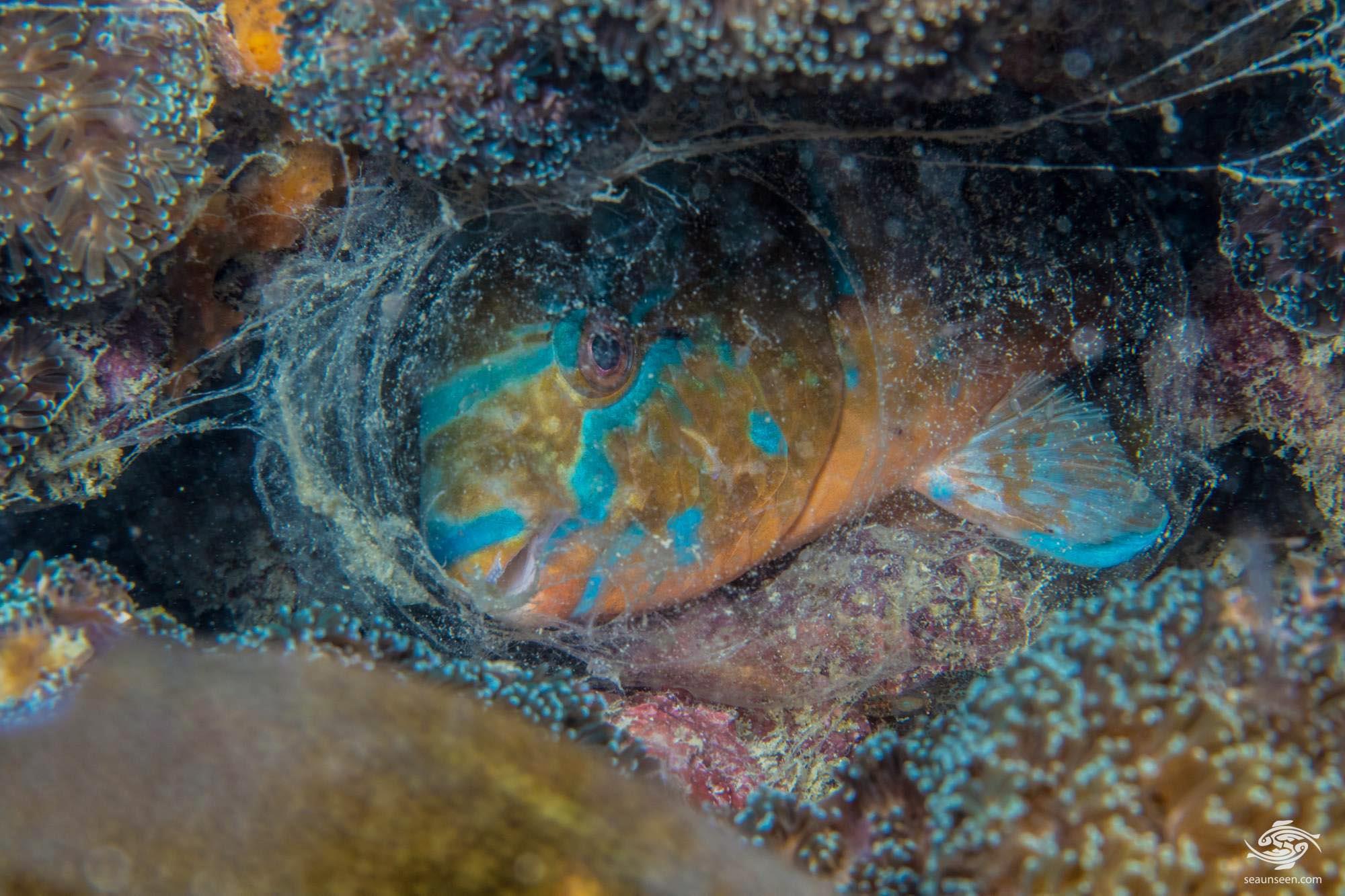 The Blue-barred Parrotfish is found across the Indian Ocean from East Africa and the Red Sea across into the Pacific as far south and east as the Great Barrier Reef and the Pacific Islands.  They are found as far north as the Ryuku Islands south of Japan. They have also migrated into the Eastern Mediterranean up the Suez canal and have been found in Lebanon. 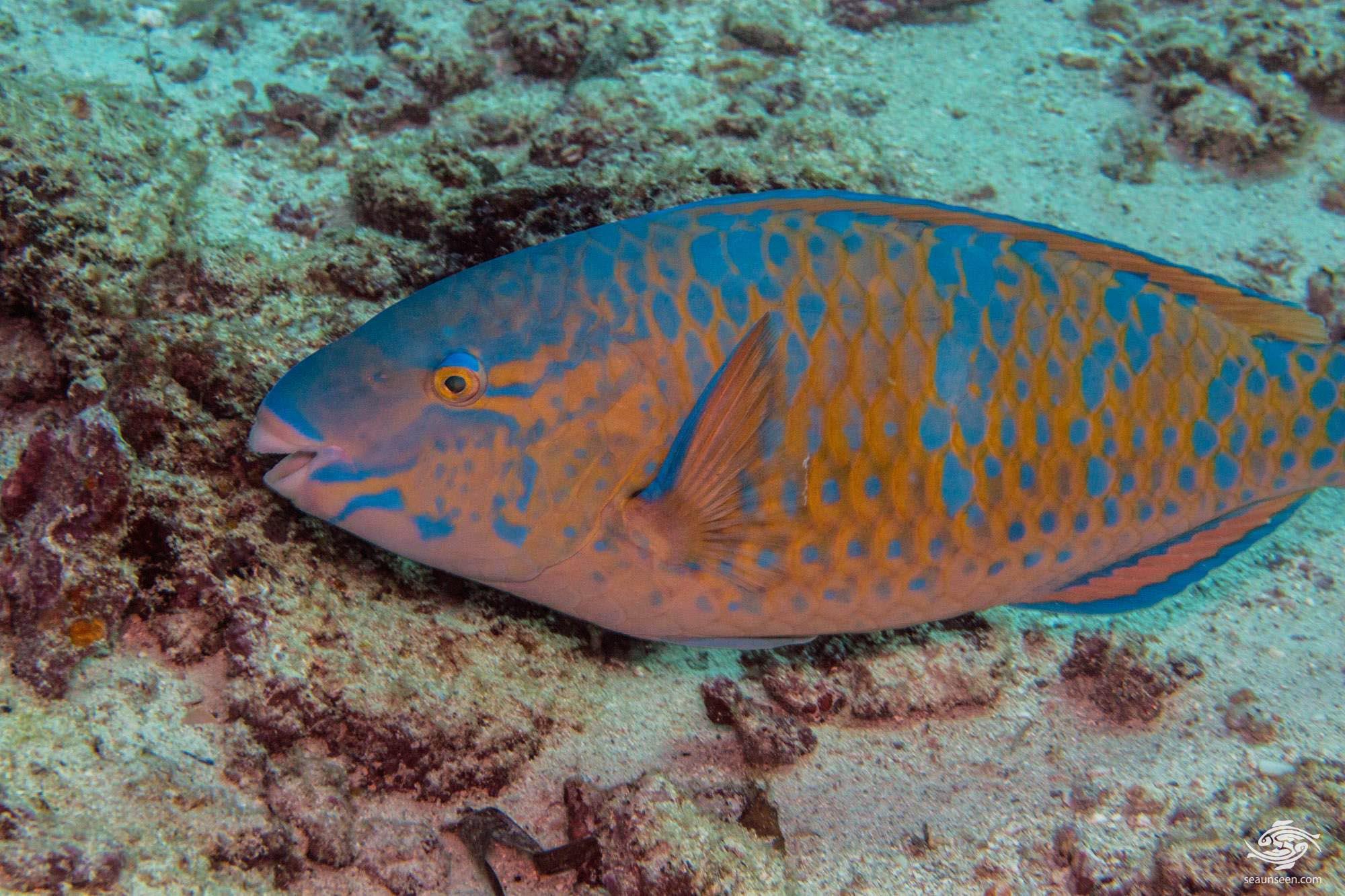 The Bridled Blue-barred Parrotfish feed on a variety of  filamentous algae which is scraped off dead coral using their powerful beaks. These scrapings which are mainly comprised of inorganic matter are further ground down by bony teeth plates and then go into a long specialized alimentary canal where nutrients are extracted.  The inorganic matter is expelled as fine sand. 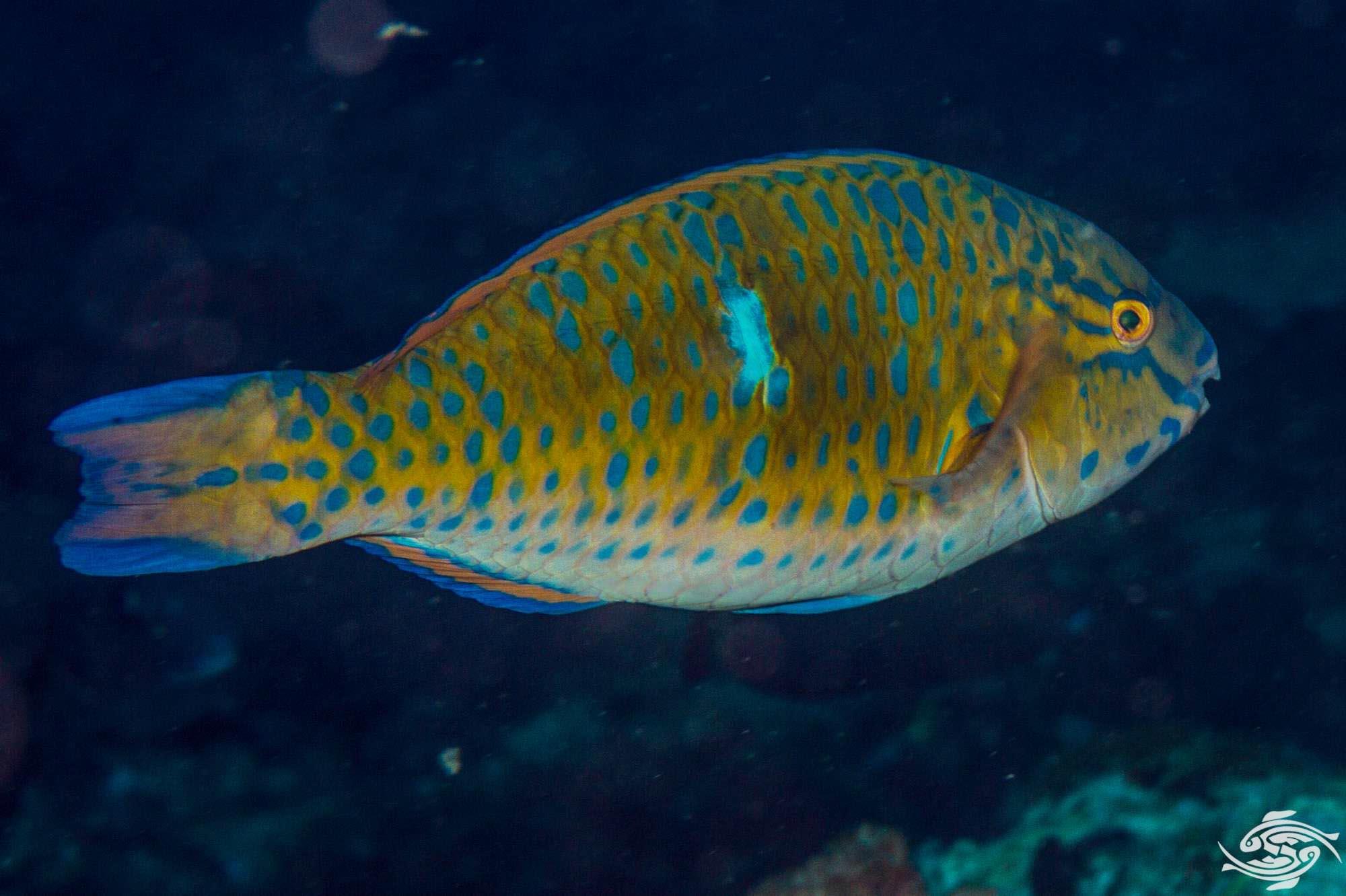 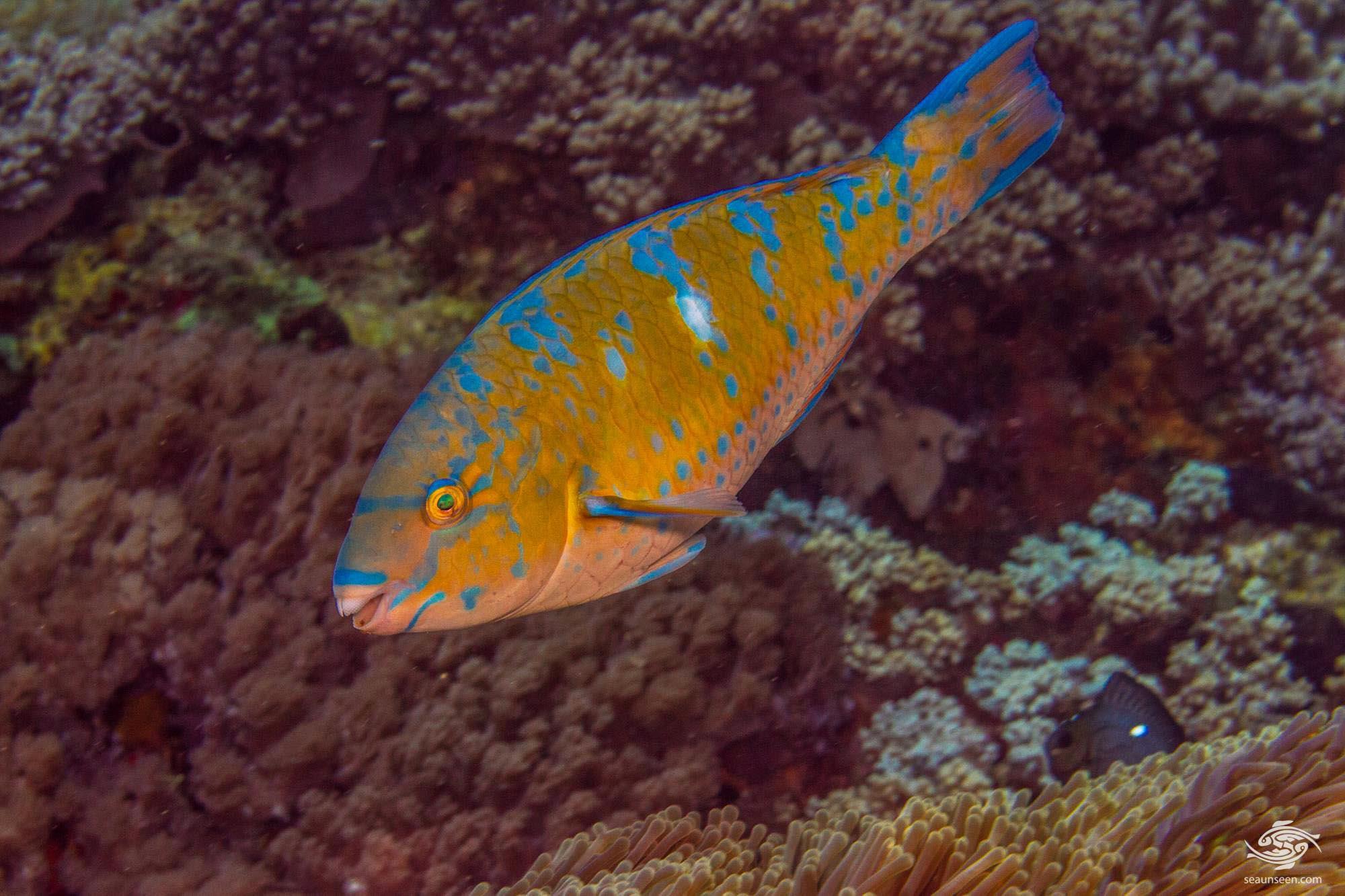 Bridled Parrotfish are not commonly kept in aquariums although some public aquariums may occasionally keep them for public display. This is both a function of their size and the difficulty in providing them with food.