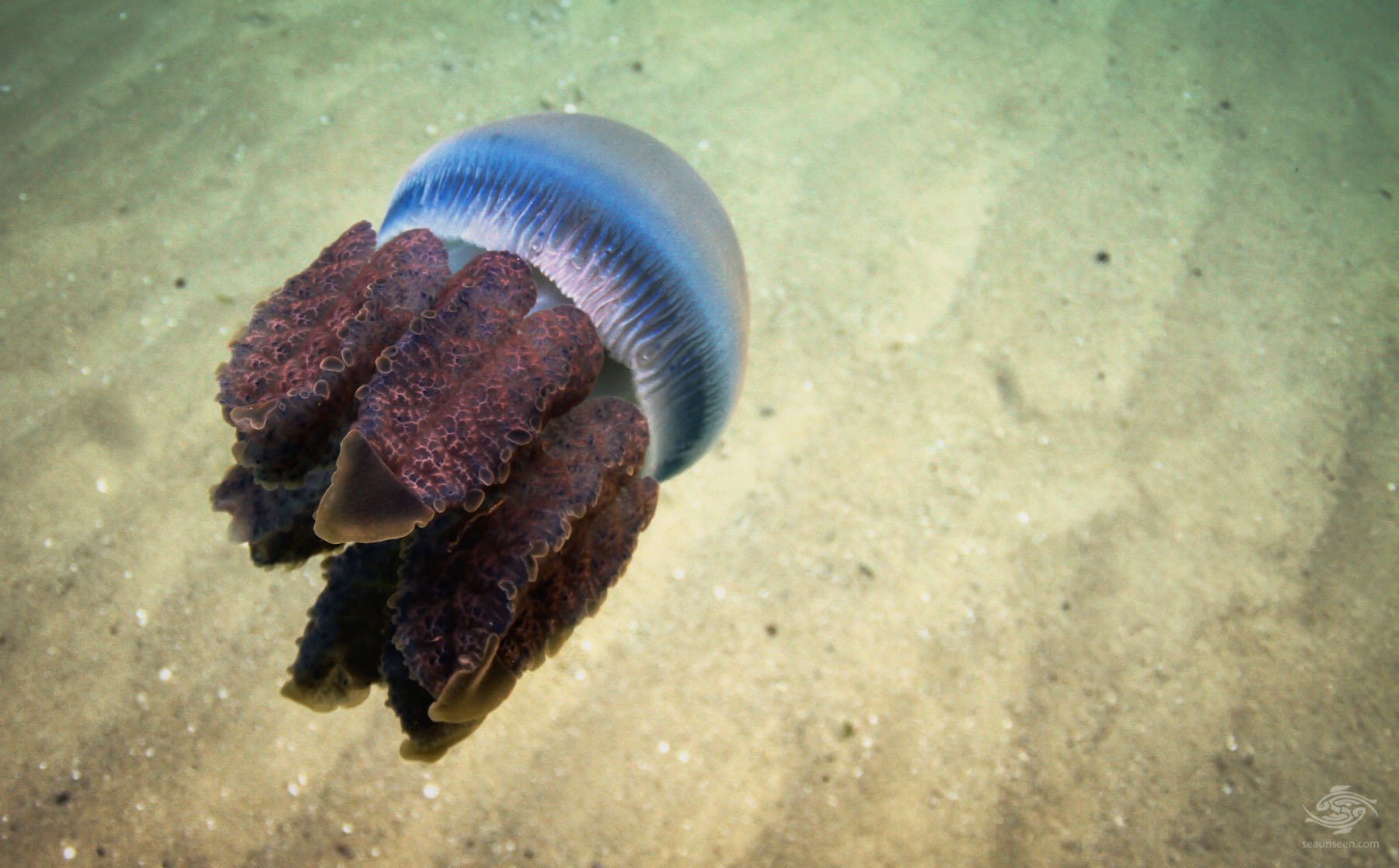 An unusually colored blue blubber jellyfish (Catostylus mosaicus), spotted off the west coast of Mafia Island in Tanzania. These jellyfish vary in colour, depending on which part of the world they are from. In some parts of the world they are known as the jelly blubber. They can vary from white to light blue and purple. Blue blubber jellyfish in Tanzania have always been known to have blue tentacles, however this one is unique with red-brown tentacles. Possibly the change of colouring is related to breeding behaviour, but this is speculation.

The bell of the blue blubber jellyfish grows to approximately 30-45 cm (12–18 in) in width although they are usually slightly smaller. Bell colors range from a creamy white to a brown and blue color. The bell pulsates and is used to propel the jelly forwards. They have eight arms with tentacles that can also vary in color. Each of the eight arms have several small mouths that catch and transport food to the jelly’s stomach.There is no mouth as such, rather there are numerous small openings on each arm. Food is passed through these openings to the stomach. The tentacles have stinging cells that can capture tiny crustaceans and small fish. 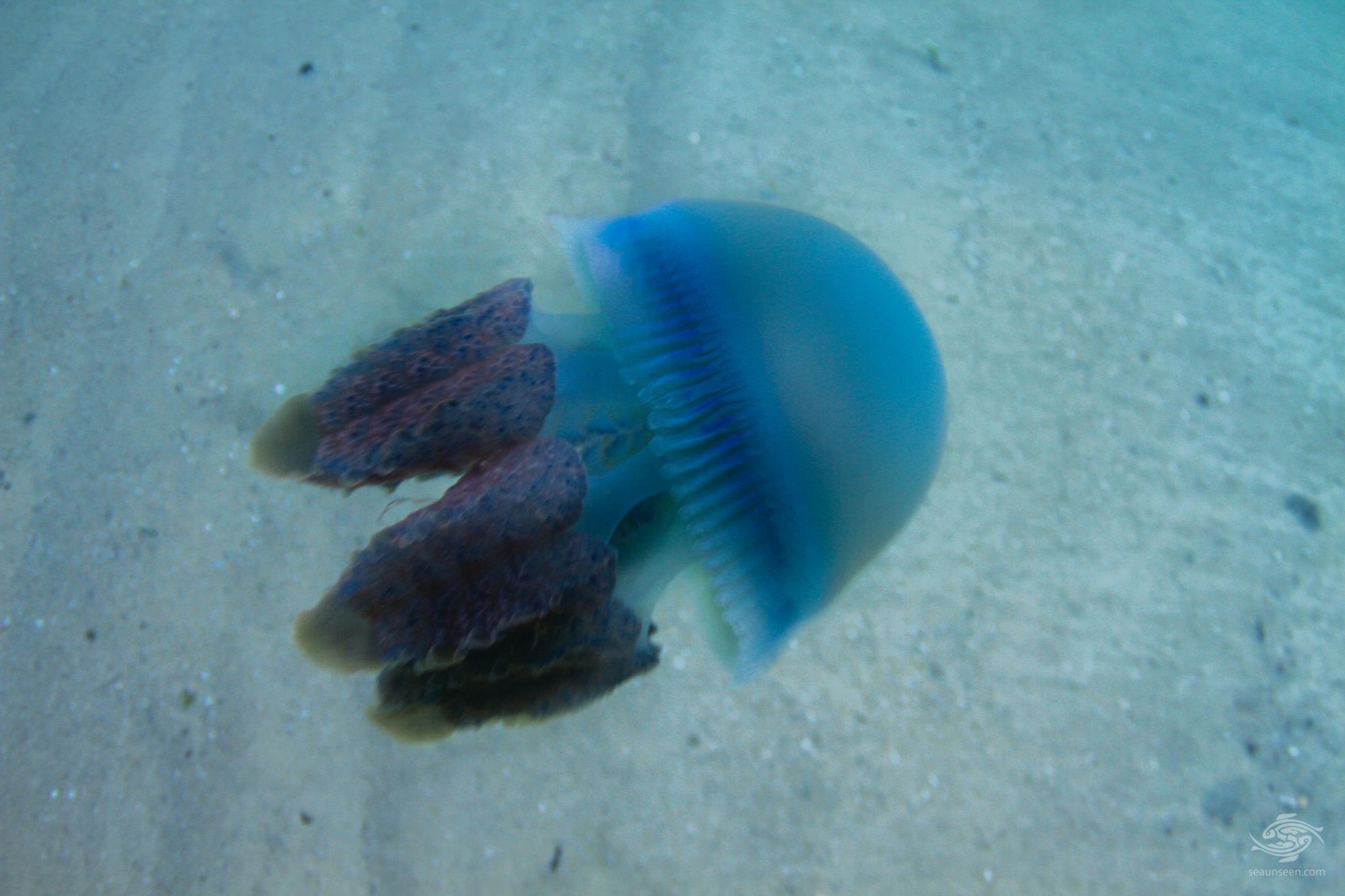 The eight tentacles  have large numbers of nematocysts or stinging cells on them. These are similar to a tube that has been pulled inside out into its self with a sharp point and has a mechanism to pump poison through the end of the point. These nematocysts are extremely small, about 0.001 mm in diameter. There is a trigger on the exterior of the tentacle and when this trigger is activated either chemically or physically the tube or tubule as it is known inverts its self. Pushing outwards and pushing the point into the prey, it then pumps poison up the tubule into the prey. This process of firing takes place in 700 nano seconds which is extremely fast and occurs with substantial pressure. In some species the point is able to penetrate the shell of small crustaceans.
There are two types of stinging cells in jellies tentacles , nematocysts and spirocysts and these inject canhypnotoxin, thalaxin and congestin into the prey. Hypnotoxin has an anaesthetic effect and paralyzes the prey. Thalaxin has an allergenic action, generating an inflammatory reaction. Congestin paralyzes the circulatory and respiratory systems of the prey.

The effect of the sting of the blue blubber jellyfish on humans is mild compared to some jellyfish. Usually the sting results in a slight redness around the area where the tentacles have touched, however some individuals may be more allergic than others. The area may be itchy for some time.

In Tanzanian waters blue blubber jellyfish are often seen in spring and summer, usually solitary but large blooms can develop. See below for images of these blooms. They are slow swimmers and easy for a swimmer to avoid. Juveniles are often white in color and are sometimes shadowed by small fish. 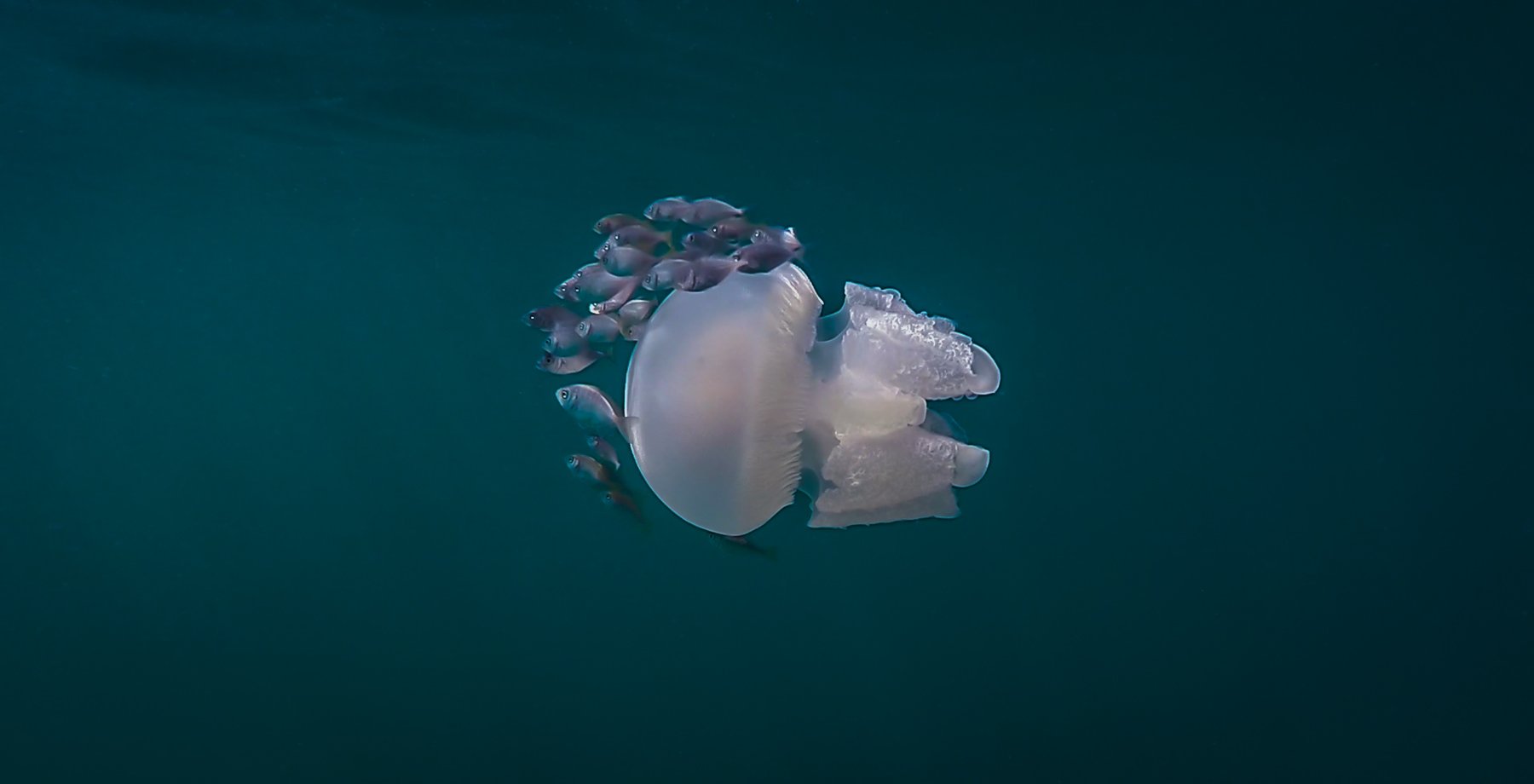 Blue blubber jellyfish do not have what we would traditionally call a brain or centralized concentration of nerve cells. Instead they have a nerve net distributed throughout the body which has various simple sensors on it and operates in a decentralized fashion. Information is transmitted through the net and via a circular net that runs around the bell with rhopalia on it, small structures containing sensors to sense light and gravity.

The circular net around the bell also controls the contraction of the bell for propulsion. Jellies use their light sensing cells to orientate themselves against the light. They use pulsations of their bell to propel themselves forward and having no sight, have limited control over where they will end up, their directional logic being generally limited to either moving away from light or towards it. Recent research indicates that some jellies may orientate their direction on a current but this is not yet proven.

The Blue blubber jellyfish is found in coastal parts of the Indo-Pacific preferring the warmer waters. 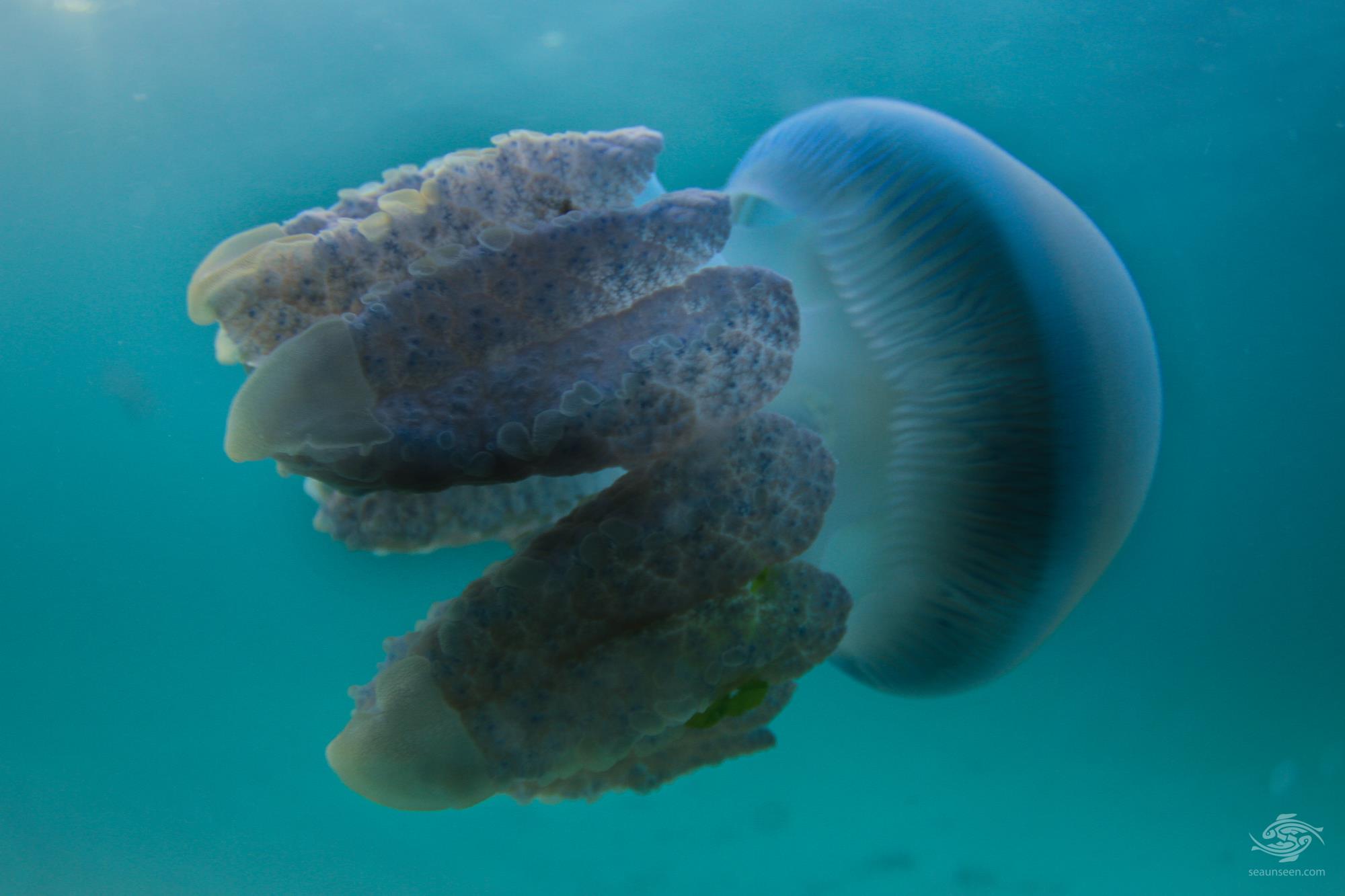 Blue blubber jellyfish obtain their nutrition in two ways. They have a symbiotic relationship with various types of algae (zooxanthellae) which provide them with some of their nutrition. During the day they spend their time closer to the surface for the algae to be exposed to more sunlight. At dusk they head lower in the water table and rely on their tentacles to catch small fishes as well as crustaceans and zooplankton. The stinging cells on the tentacles are used to capture prey. 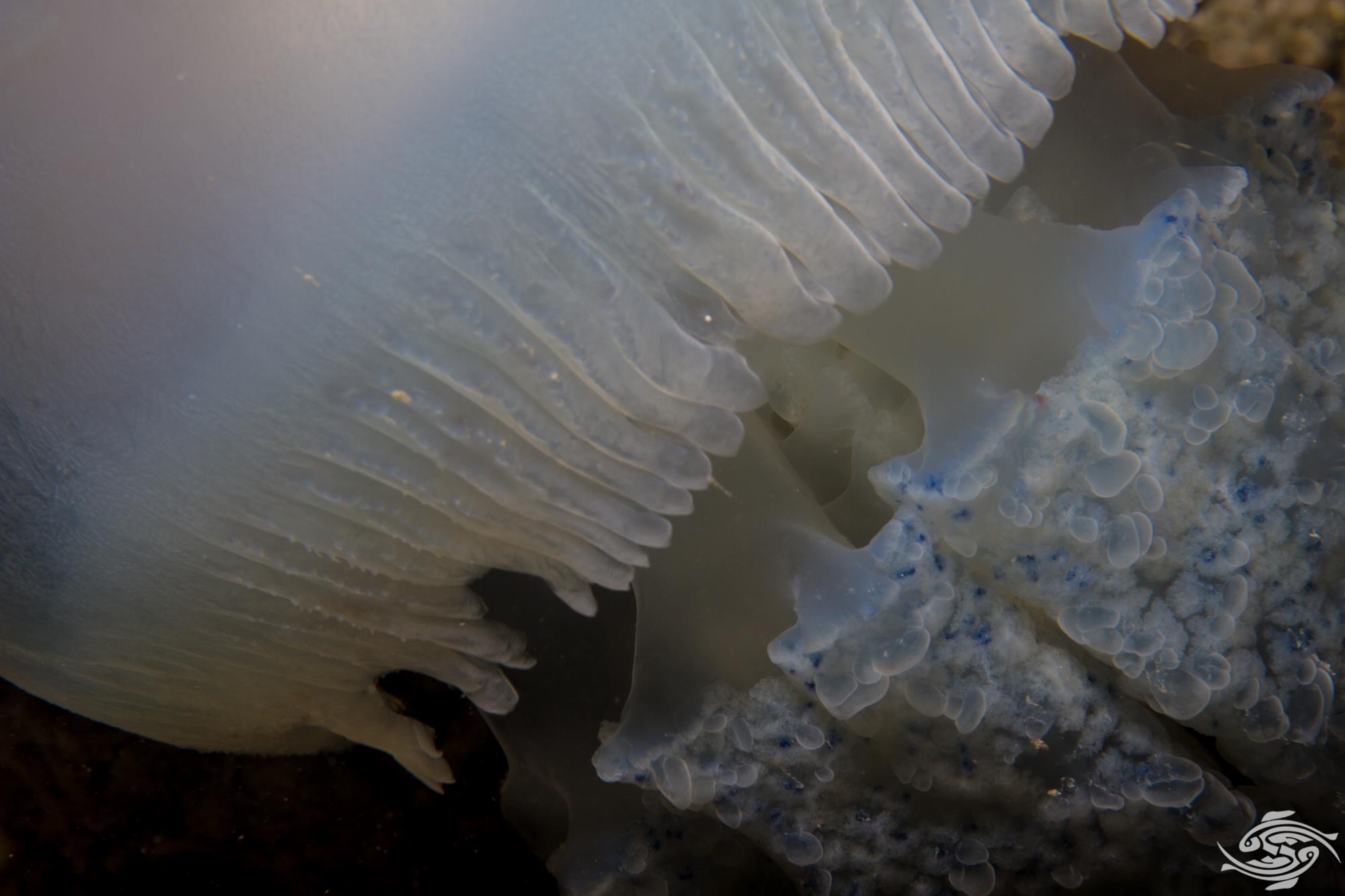 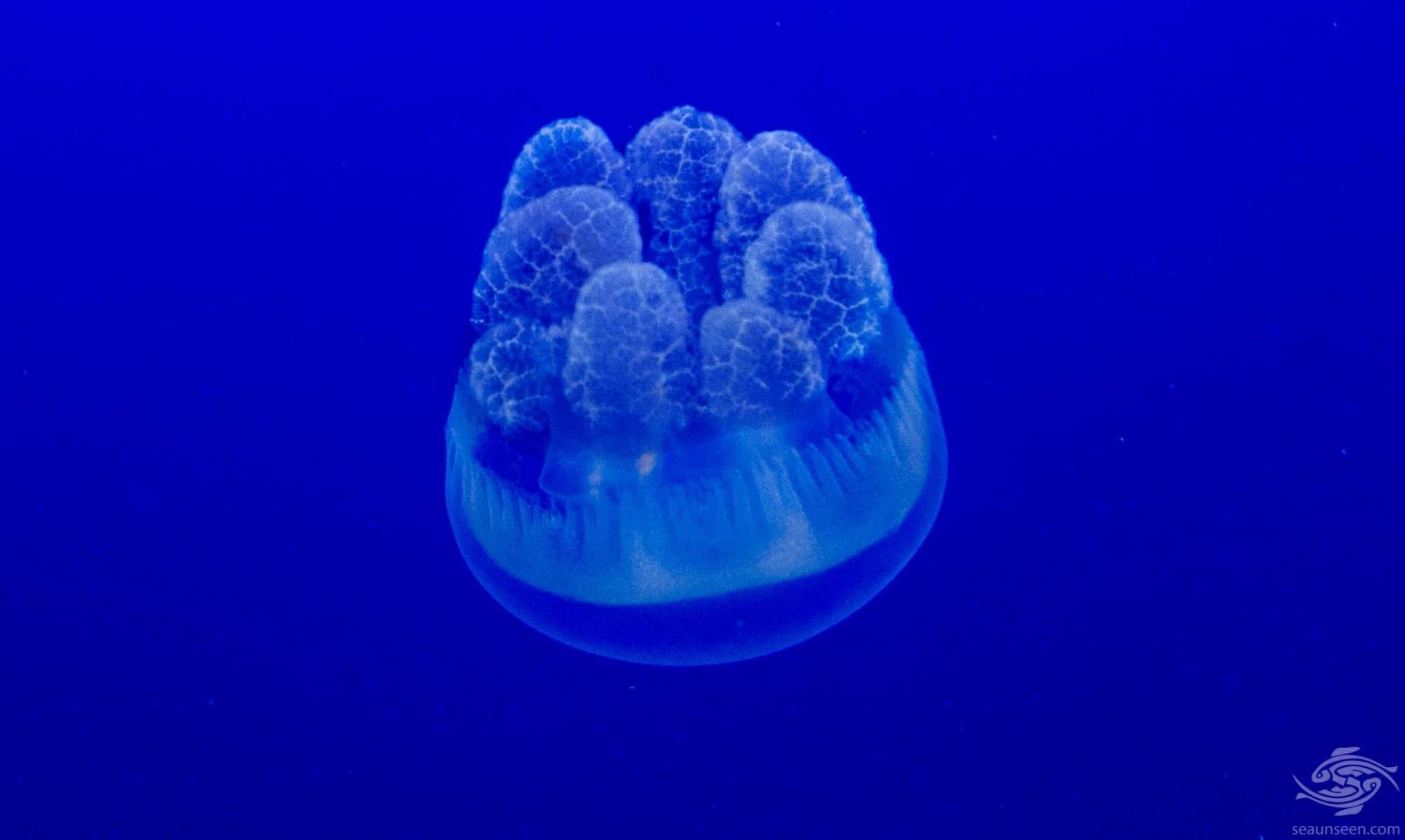 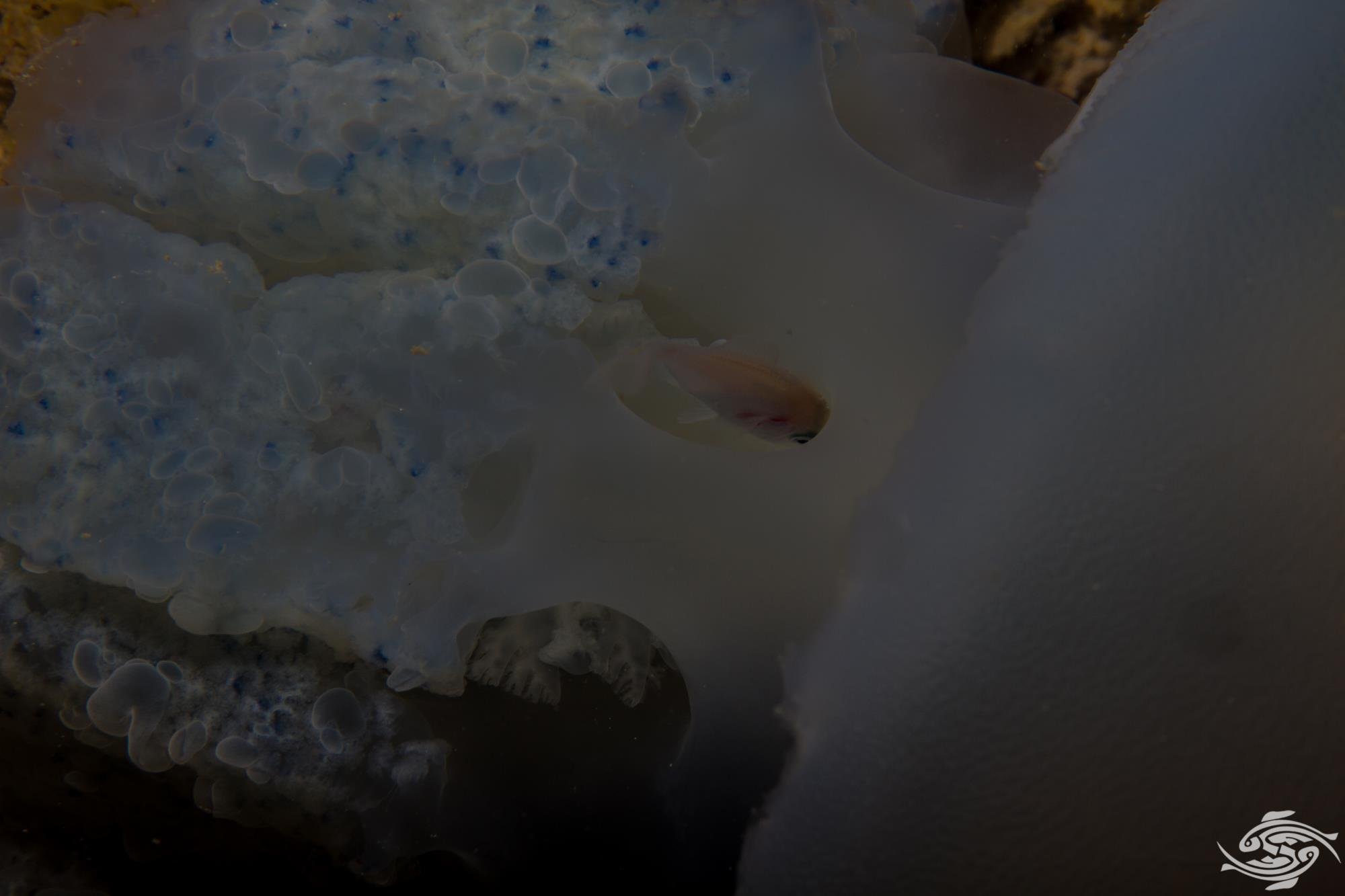 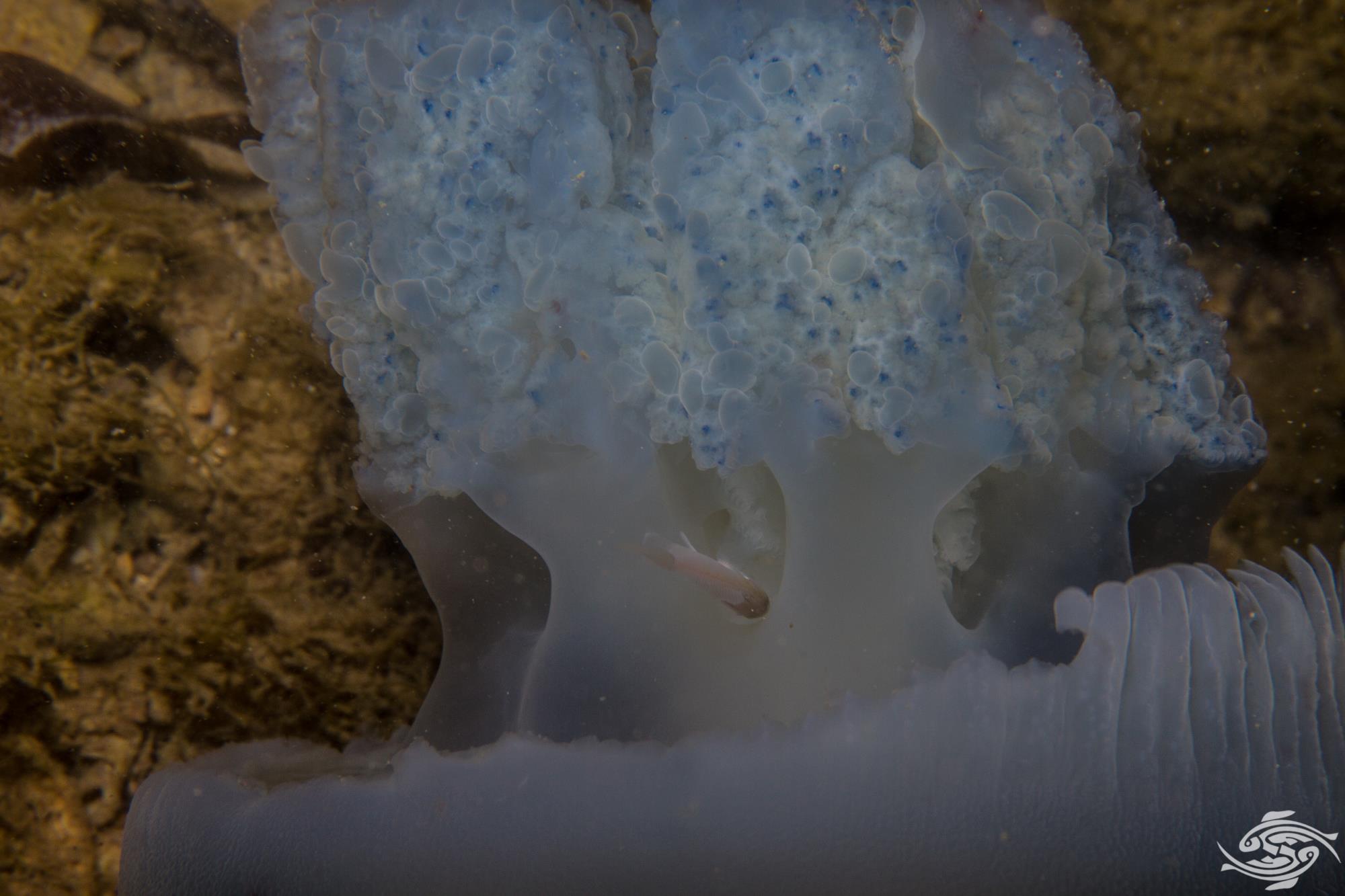 In the far east in countries such as China and Japan, blue blubber jellyfish are regarded as delicacies. They are sometimes dried and powdered or added to stews, but they are also eaten as sushi and sashimi. Being 90 %  water they have very little fat in them ! 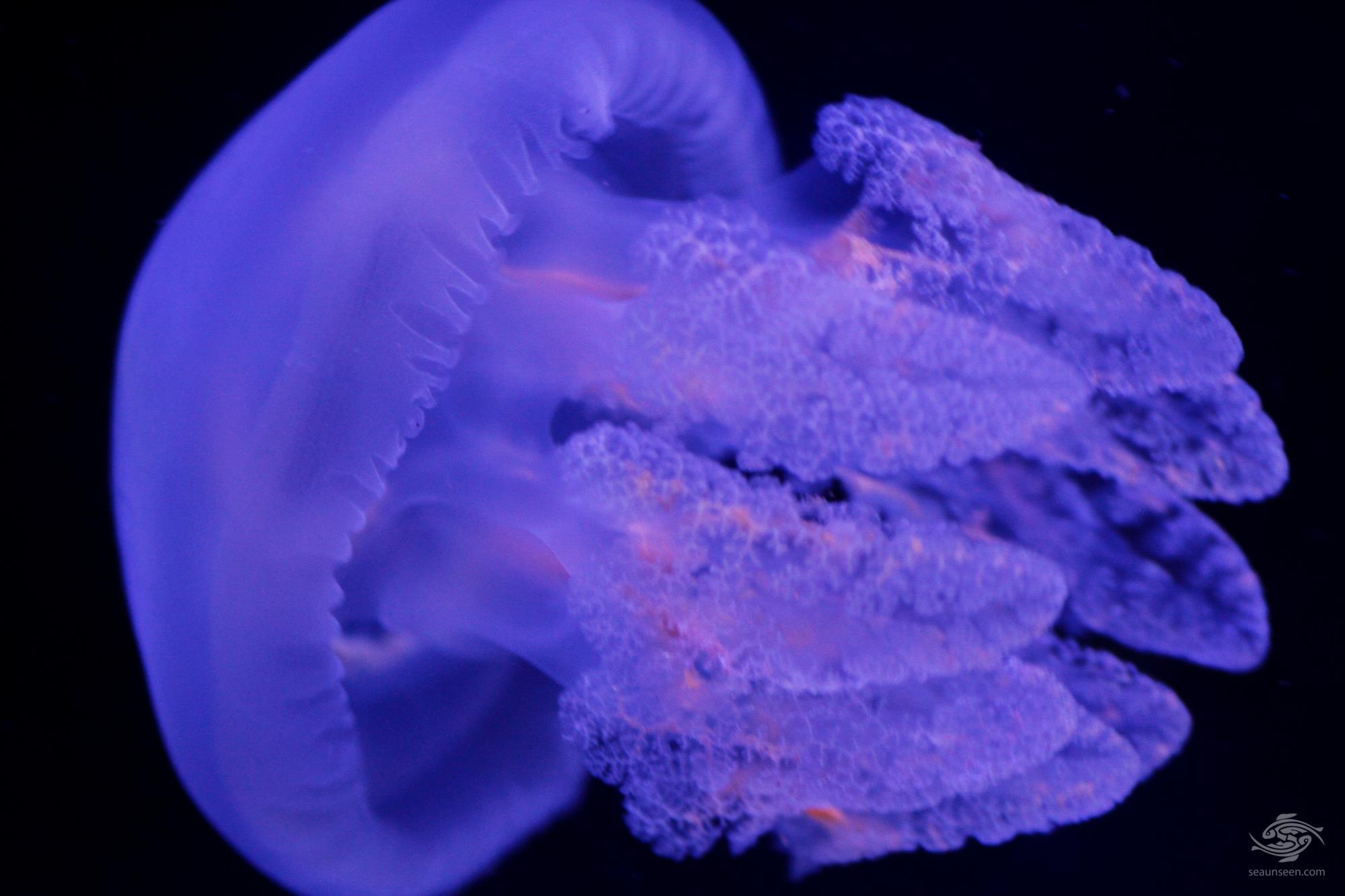 Blue blubber jellyfish are kept in various public aquariums and some enthusiasts keep them in special tanks. Advances in technology now allow jellies to be kept in small tanks with currents in them that prevent the jellies from hitting the sides.

Because they are easy to feed blue blubber jellyfish are becoming more popular. Small relatively cheap tanks which can be purchased to house them and they can live for up to a year in captivity. Because jellies fluoresce under ultra violet light a jellyfish tank can make a very attractive addition to a room.

In some years the blue blubber jellyfish bloom in the channel between Mafia Island and the Tanzanian mainland, congregating in large numbers. This creates havoc for the local fishermen as they clog their nets. Because of these blooms, catches often consist of more jellyfish than fish as can be seen in the images below.

This deprives the local fishermen of their main food source and times are tough for them during these jellyfish blooms. As a result of having to remove large numbers of jellyfish from the nets the fishermen are often stung on multiple occasions. 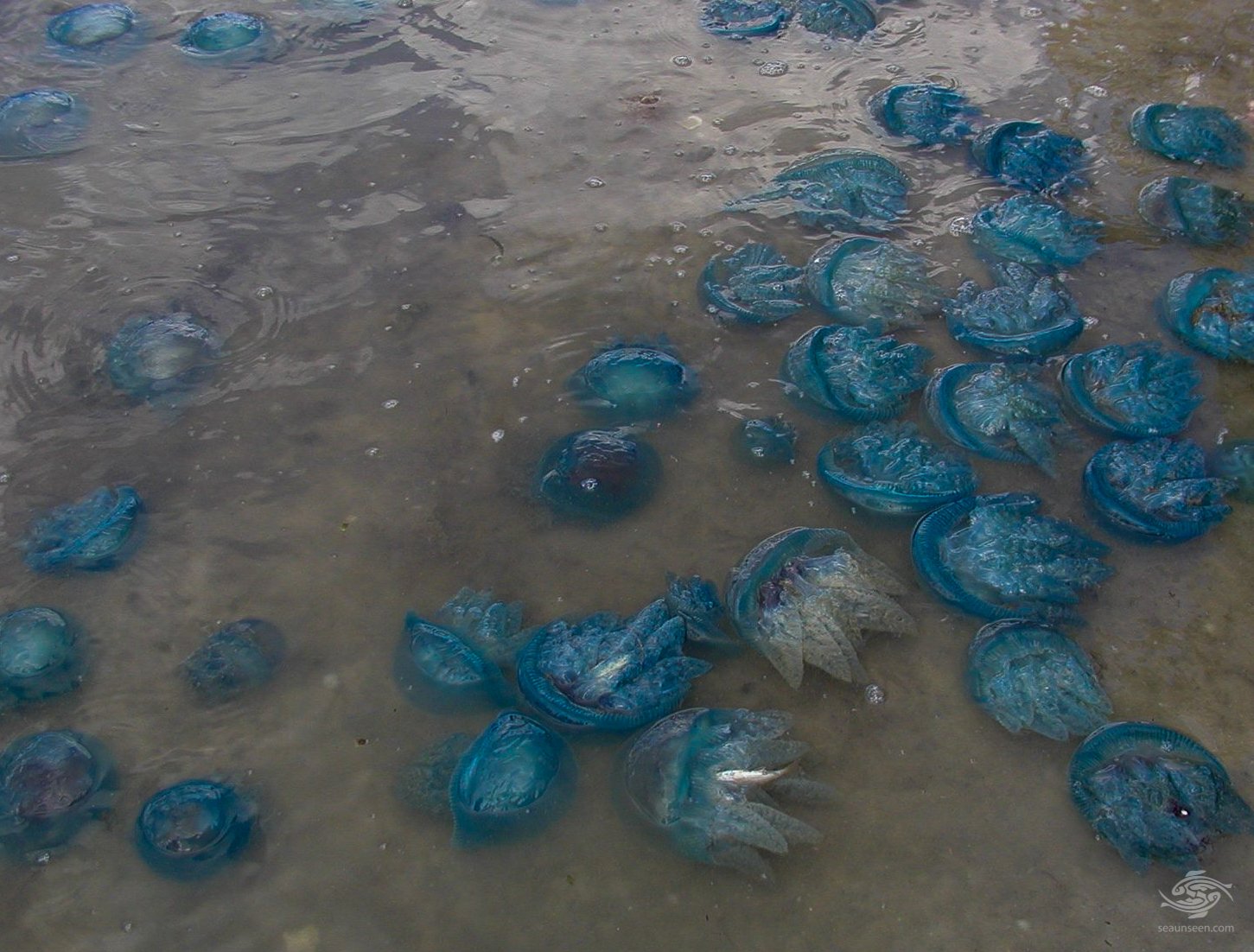 It is not really known for sure as to what causes these blooms.  However in all probability, they relate to favorable water and feeding conditions.  Small fishes partially ingested can be seen in the images above.

The main predators of blue blubber jellyfish are leatherback turtles and some species of fish such as tuna and sunfish. Because populations of these predators are dropping drastically, this may be an additional contributory cause of the blooms. 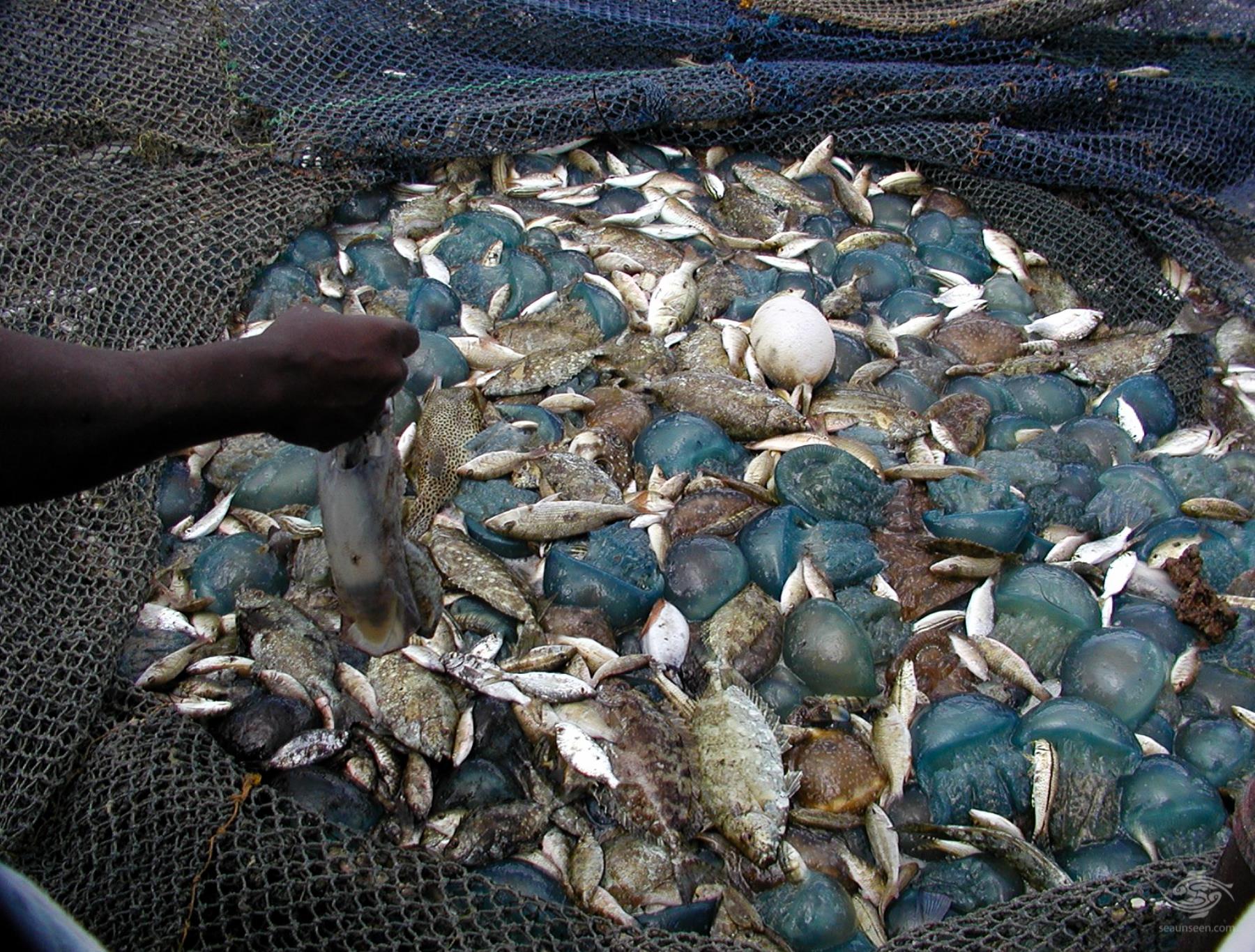