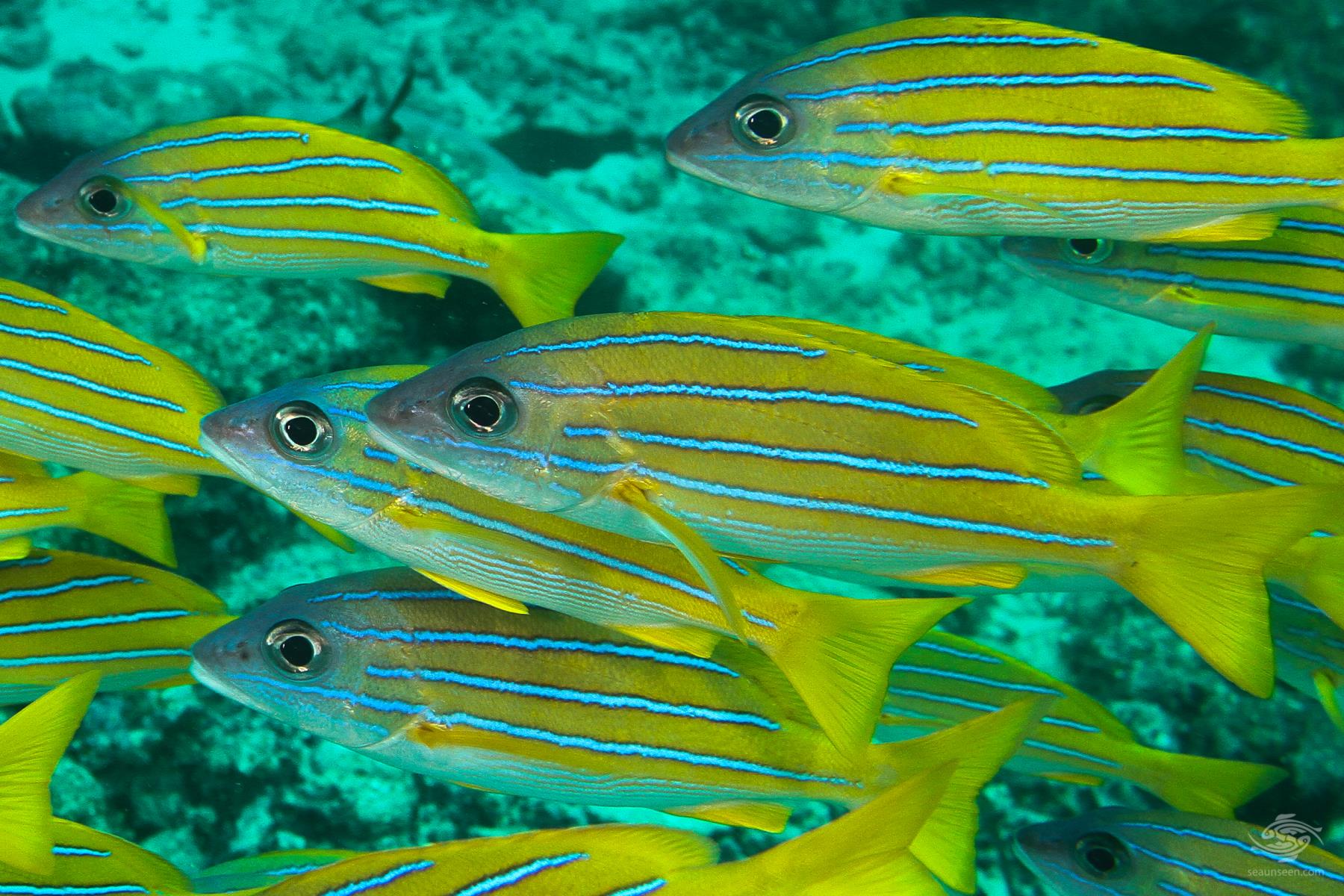 The blue lined snapper Lutjanus kasmira is also known as the bluestriped sea perch and blue lined snapper, they are attractive fish which often shoal in large numbers. When seen over a reef in good light a shoal of these fish adds stunning coloration to the area.

Blue lined snapper have a bright yellow body, overlain by four narrow brilliant blue stripes lined with thin black lines along the sides. The belly is white with faint greyish stripes and bright yellow fins. They grow to 40 cm but are more commonly around the 25 cm mark. 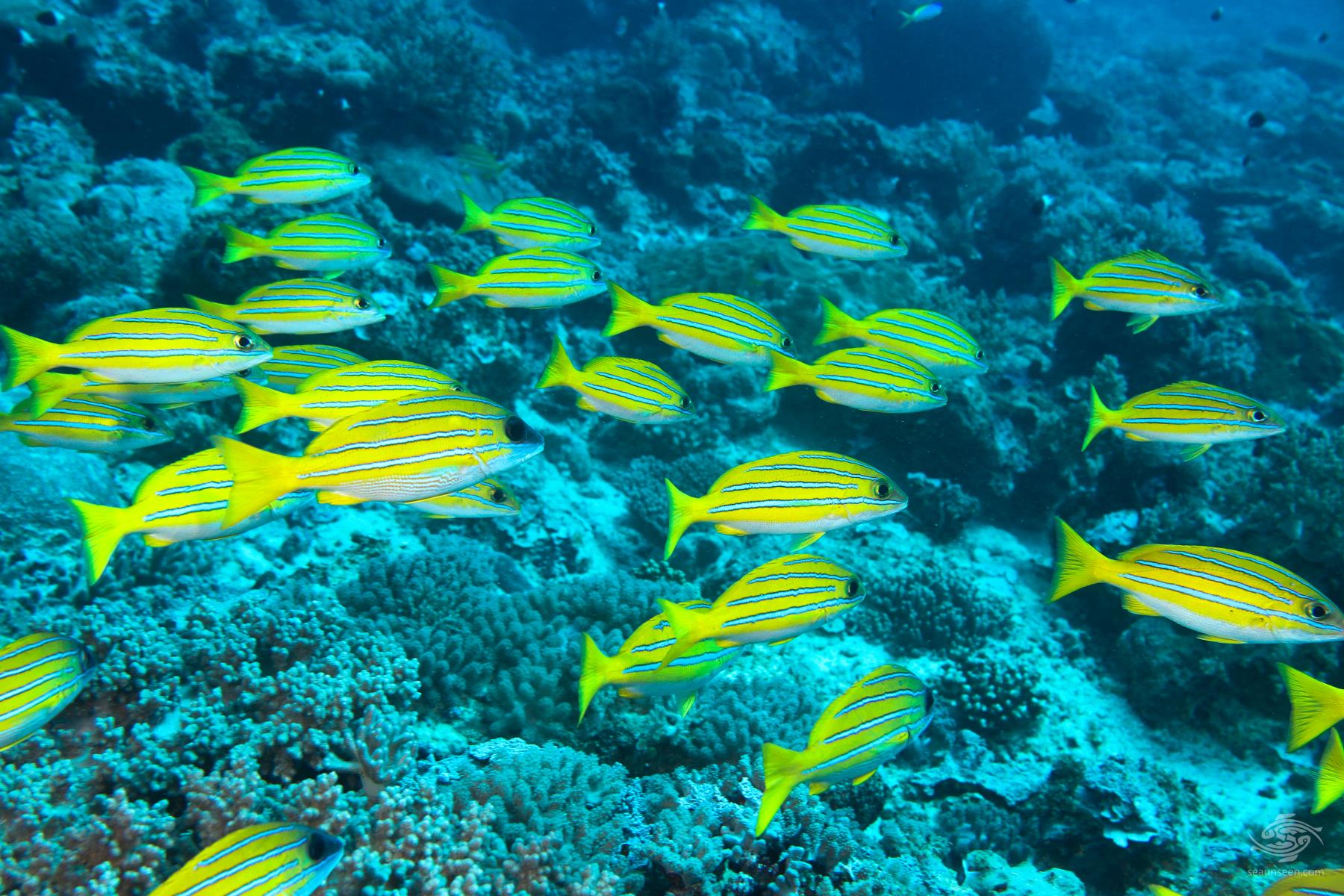 At times they are curious and will often come towards a diver and you can get quite close to them, although if you get too close they move off, but generally in an unhurried manner. 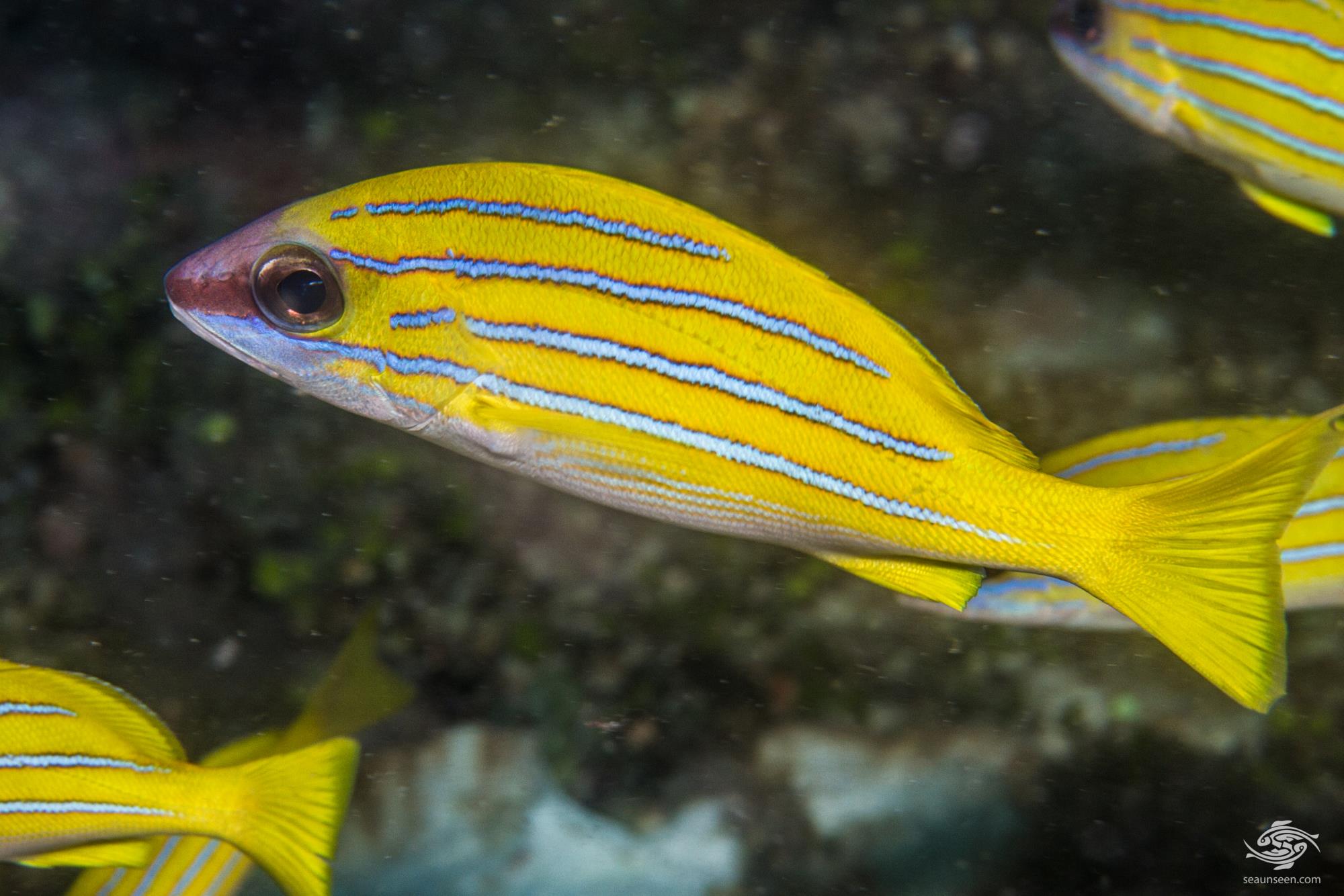 Blue lined snapper are widely distributed across the tropical Indo-Pacific, from South Africa to the Marquesas and the Line Islands in the central Pacific. Interestingly in the 1950’s they were introduced to Hawaii from Tahiti along with several other species as a possible food source, but although the species took hold, due to their lower economic value the transfer has not been a success and they have to some extent put pressure on the indigenous species.

They inhabit coral reef lagoons and outer reef slopes in depths to depths of over 100 meters. During the day, large shoals are often seen around coral bommies and caves. Juveniles are often seen over seagrass beds. 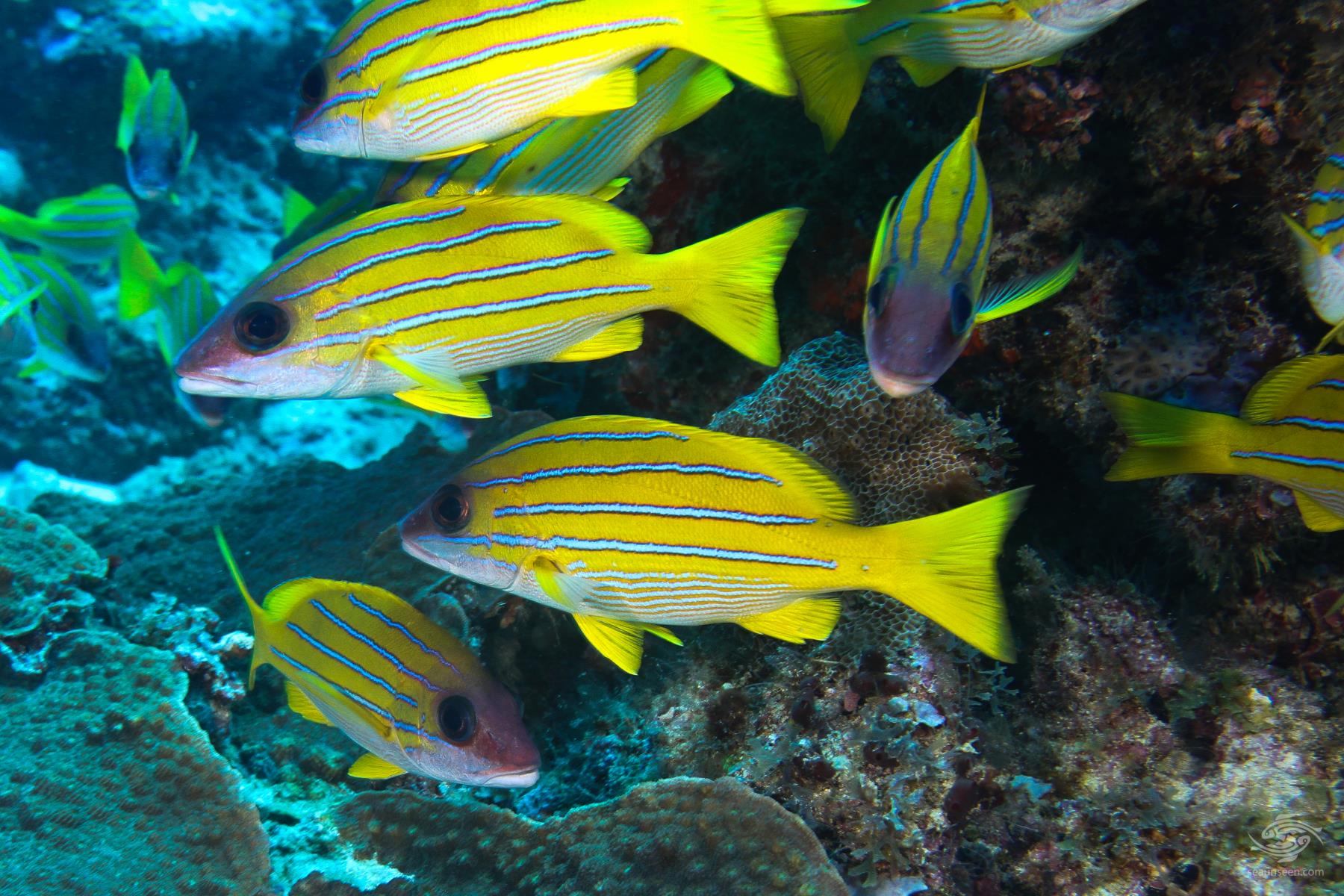 Blue lined snapper have a varied diet, feeding on fishes, crustaceans, stomatopods, cephalopods and plankton as well as algae. Their diets vary with maturity and locally available prey items. 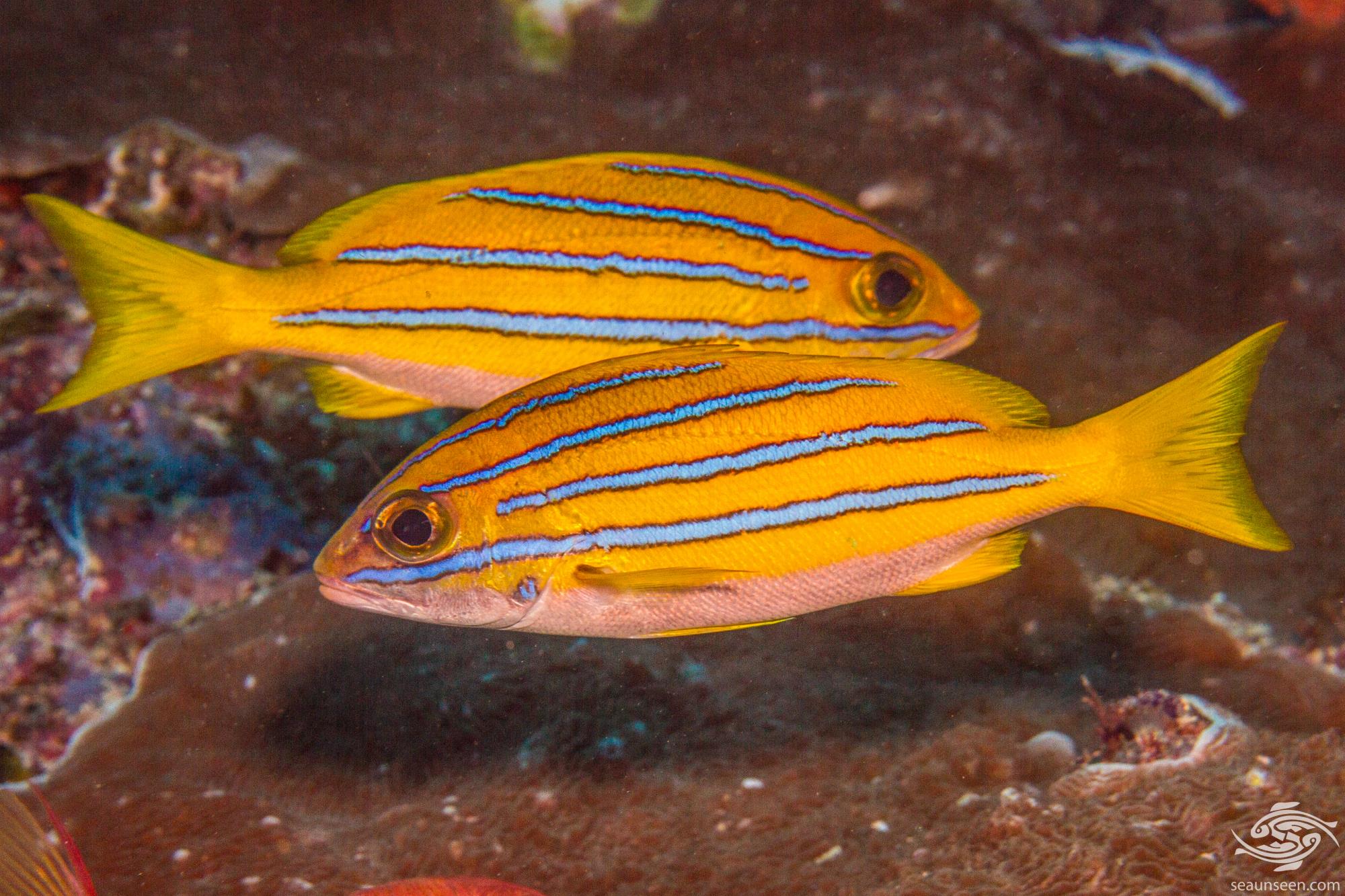 In the warmer tropical areas they spawn throughout the year and sometimes swim in circles with their mates releasing eggs and spawn into the water table. In cooler areas they spawn when the water is warmer in summer. The eggs which are round and transparent float and hatch after 18 hours. 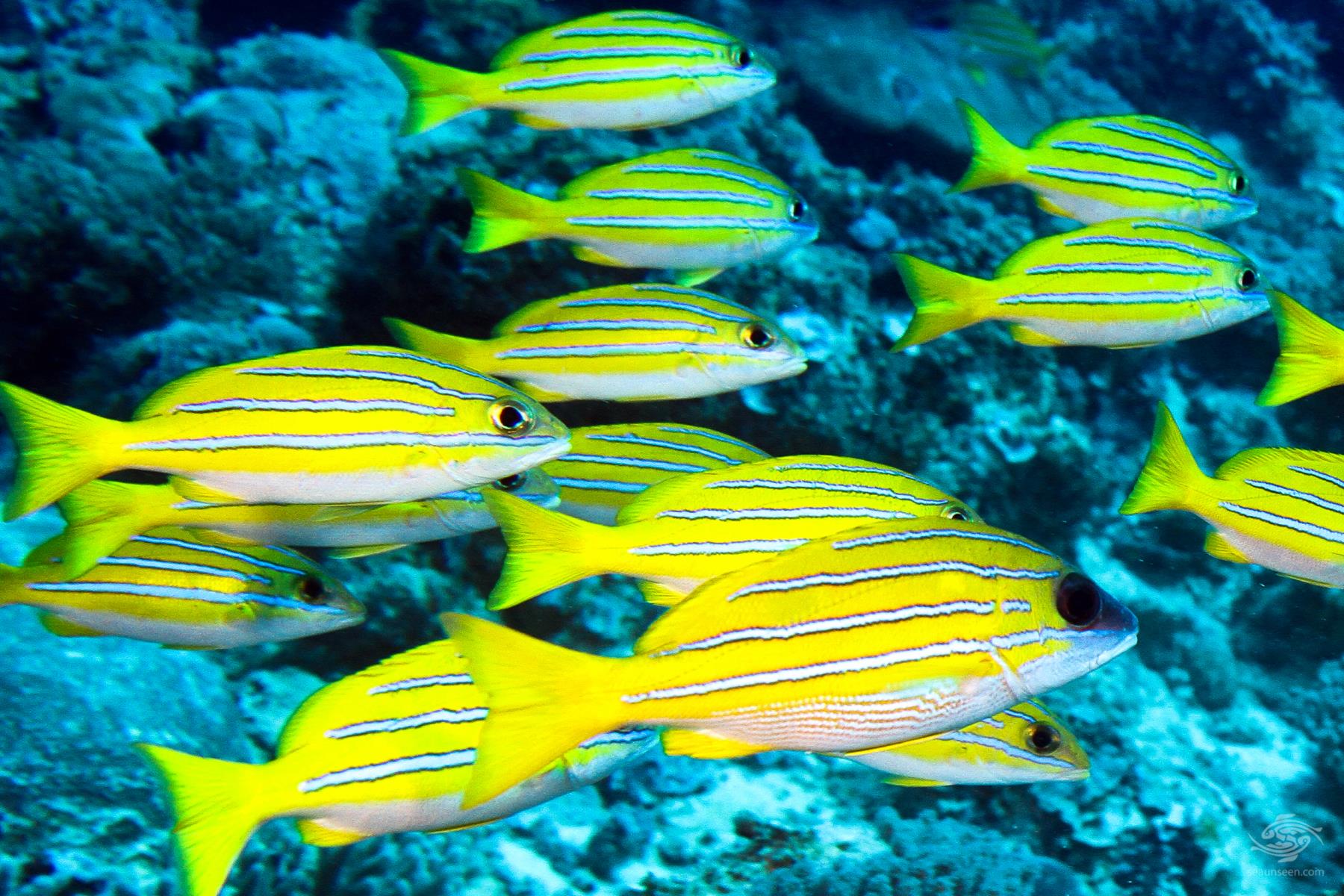 Blue line snapper are exploited commercially, but not to the extent of other snappers which command premium prices in the market. When cooked, their skin shrinks dramatically and pulls the meat apart. This makes the meal less aesthetically pleasing, so generally only skinned fillets are cooked. The flesh is said to be not quite as tasty as other snapper species so they command lower prices in the market making them less vulnerable to exploitation.

Because of their potential size of 40 cm they require a large tank. The Bluestripe Snapper is a schooling fish and should be housed with 3 or more tank mates. The Bluestripe Snapper should be offered a diet of meaty foods such as chopped frozen beef, krill, vitamin-enriched brine and shrimp along with other regular preparations for carnivorous fish. They are quite a hardy fish. 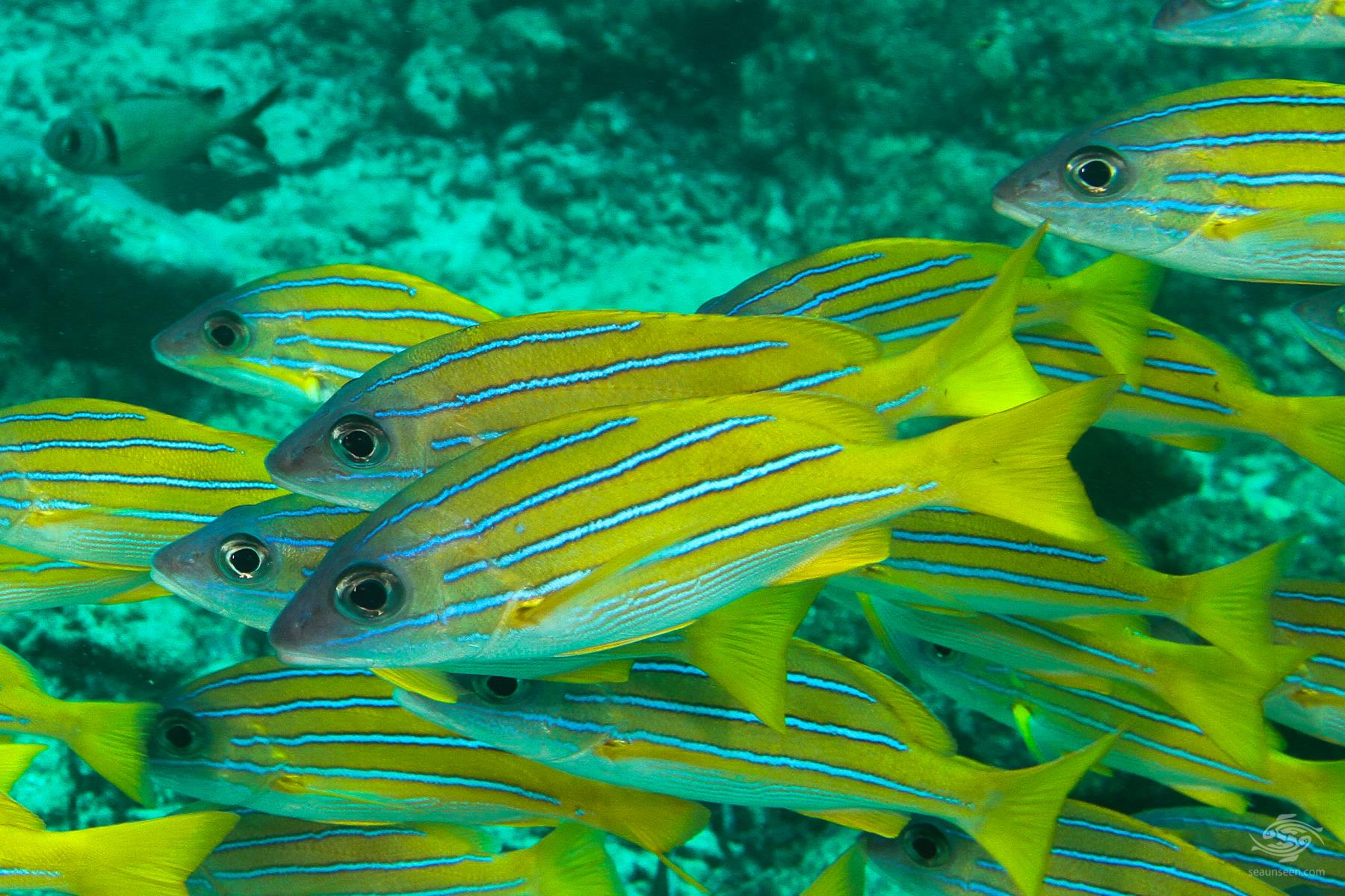