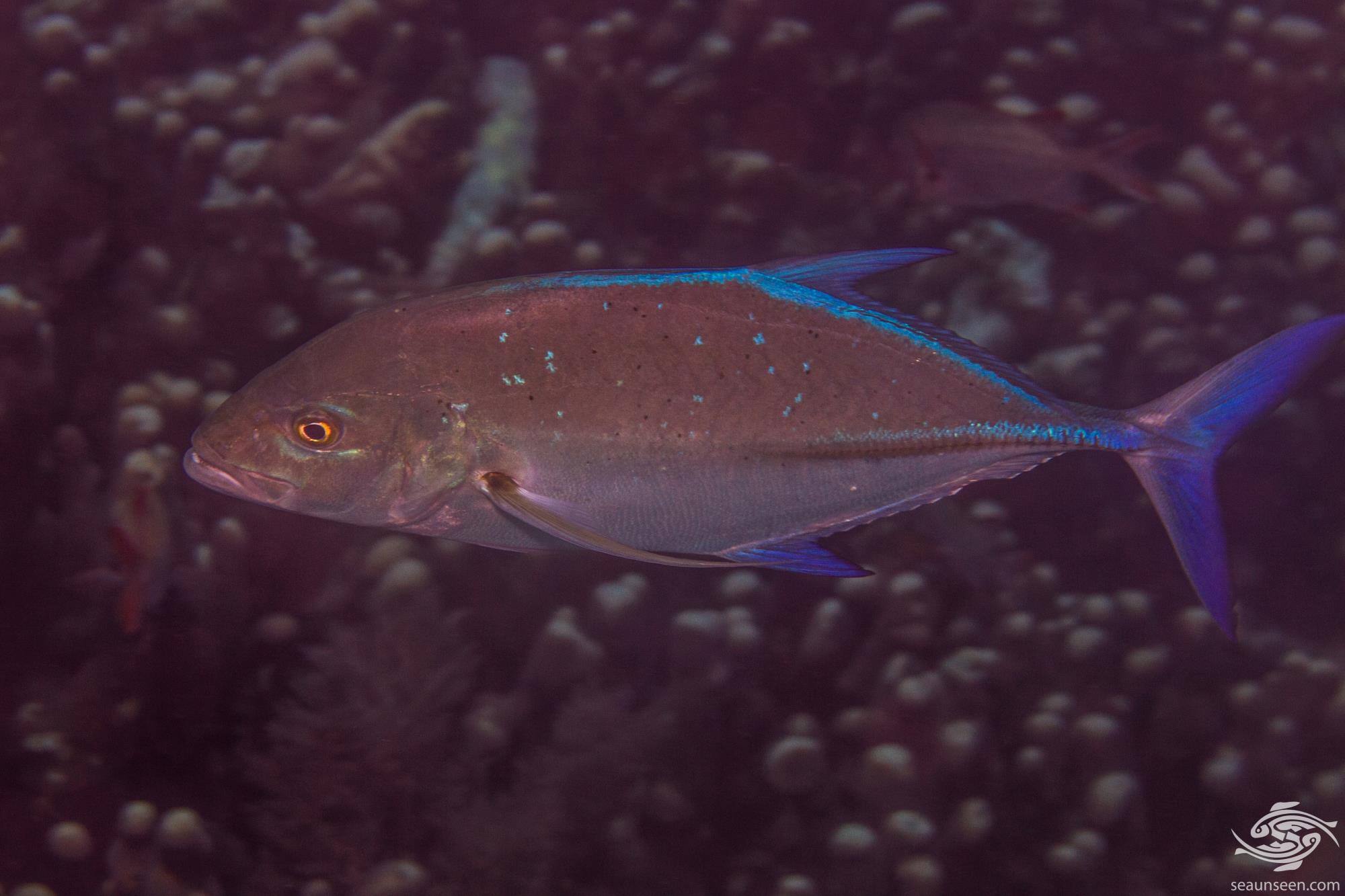 The species is easily distinguishable by their electric blue fins, which in real life are more vibrant than in the photographs. This is a stunning fish to view underwater. The upper body is a brassy color lightening down the body to a silvery white color on the stomach. Black spots are found on the adults on the upper areas with the fish developing more spots as they age.

Juveniles lack the blue coloration on their fins and instead have darker colored fins and yellow pectoral fins. Adults grow to a maximum length of 117 cm but the average size is generally below 80cm. They can weigh up to 43 kilograms. They are similar in shape to other trevally’s with an oblong compressed body, with the dorsal profile more convex than the ventral profile. This gives them a more pointed snout than most other caranx members. The fish in the images are in the 70cm to 80 cm range. 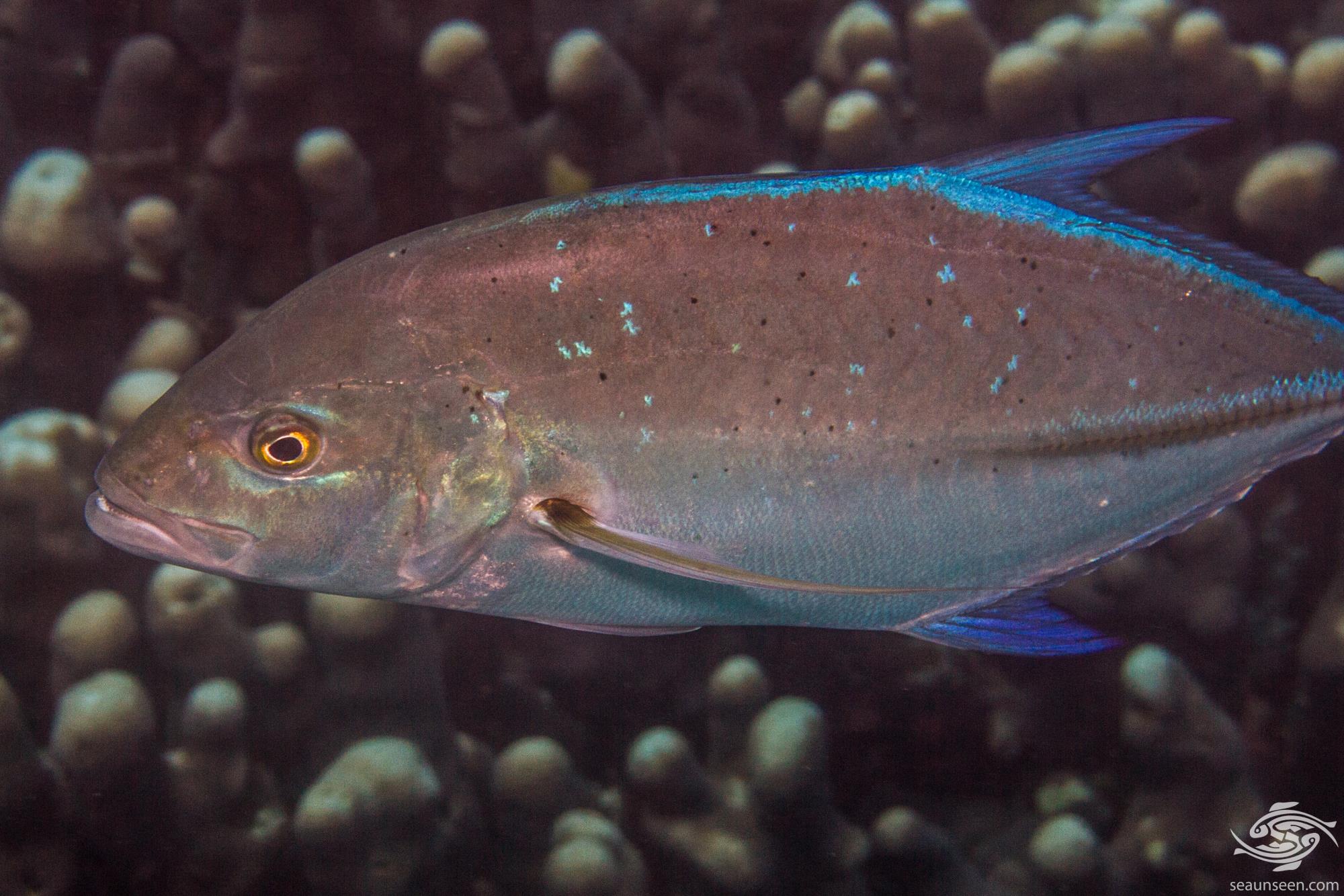 Juveniles are often found shoaling in shallow protected waters, whereas the adults prefer a more deeper setting. In Tanzania adults are often found on the edge of drop offs on the deeper reefs. These fish are extremely common on the east coast of Mafia Island and invariably will be spotted if one dives outside the Chole bay area. Adults will often make forays into shallower waters for feeding. In areas where they have not been spearfished they will often approach a diver and circle him.

The bluefin trevally has a wide range being distributed throughout the tropical waters of the Indo Pacific, ranging from East Africa to Central America in the East and Japan in the north, Australia in the south. They are common in the central Indo Pacific around all the archipelagos and islands and the islands of Polynesia and Hawaii down to Mexico. 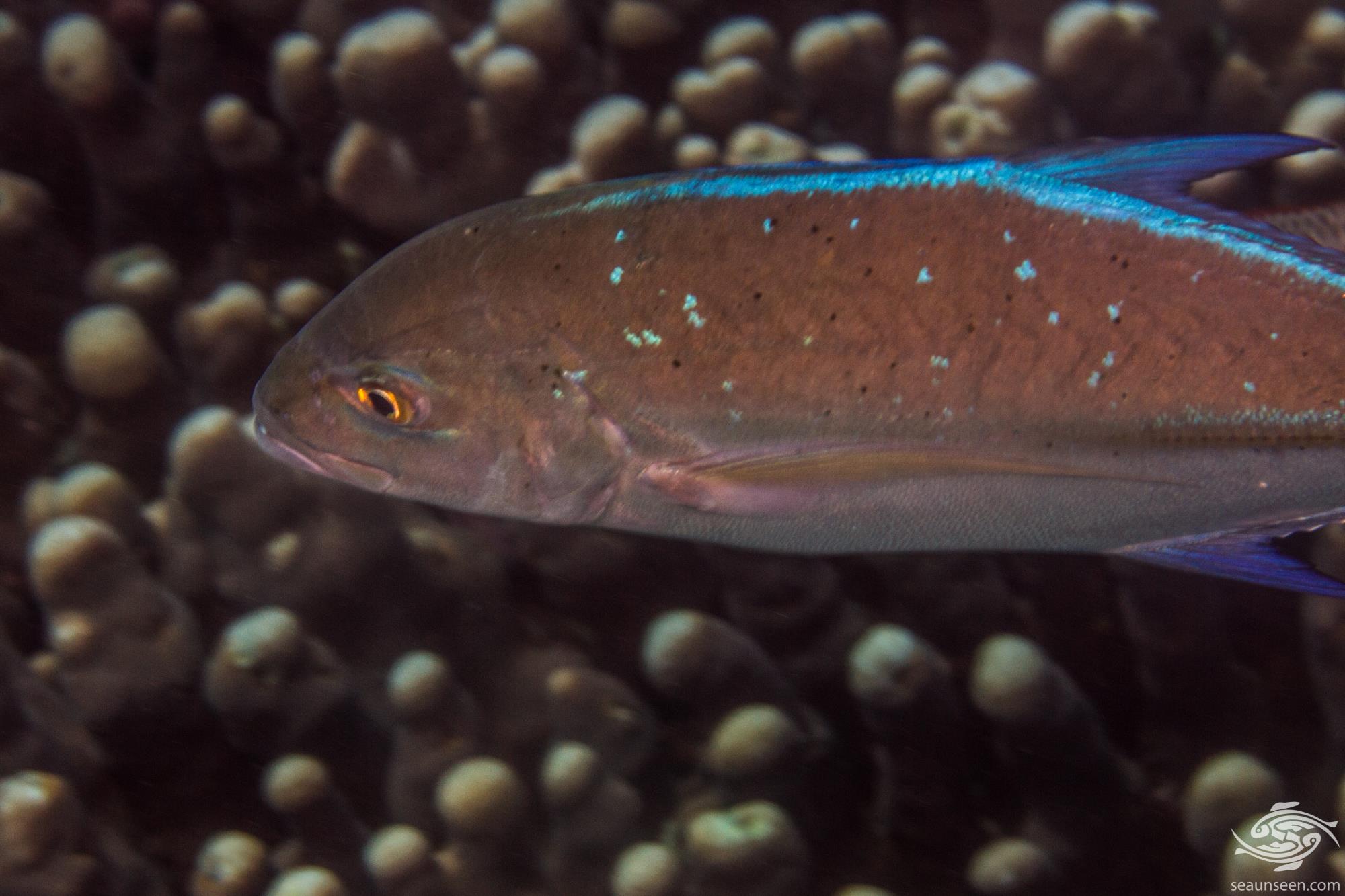 The bluefin trevally is a strong fast swimming predator, feeding mainly on small fish supplemented by squid, octopus and crustaceans. They have a wide variety of hunting techniques and at times shoal as a hunting strategy. They favor drop offs with a strong current and because of this are often seen hanging off the edge of a large drop off waiting for prey.

The bluefin trevally can reproduce roughly every month and a half and the females can release up to 750000 eggs per spawning. The fish reach sexual maturity at around two years of age. Spawning is thought to occur at night and has never been observed in the wild. Large aggregations of the fish are thought to be related to spawning.

The bluefin trevally is an important fish commercially and in some areas such as Hawai the population levels have dropped dramatically due to over fishing. They are also prized by recreational fishermen and spear fishermen as a game fish. Research has begun into aquaculture of the species. 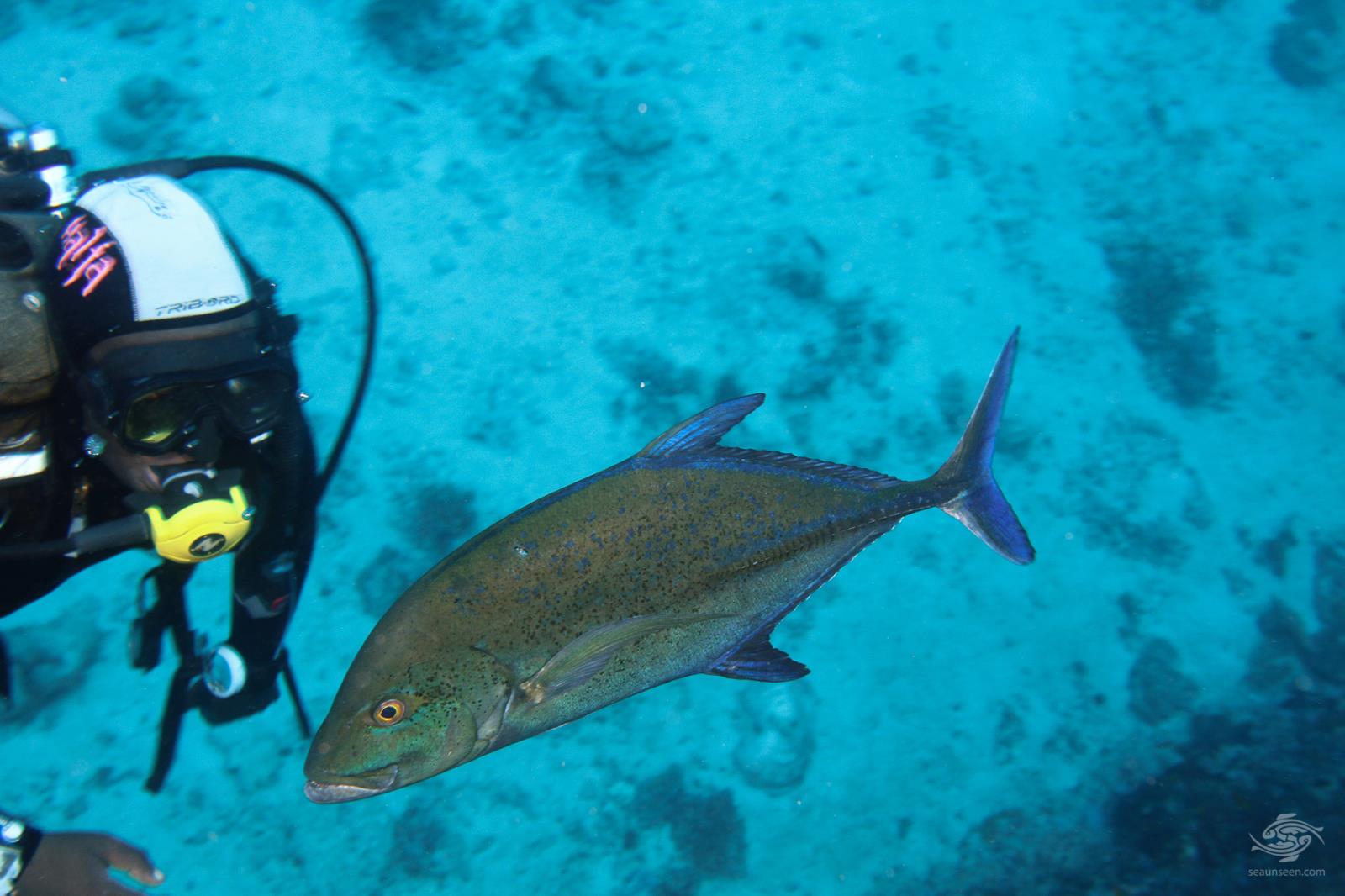 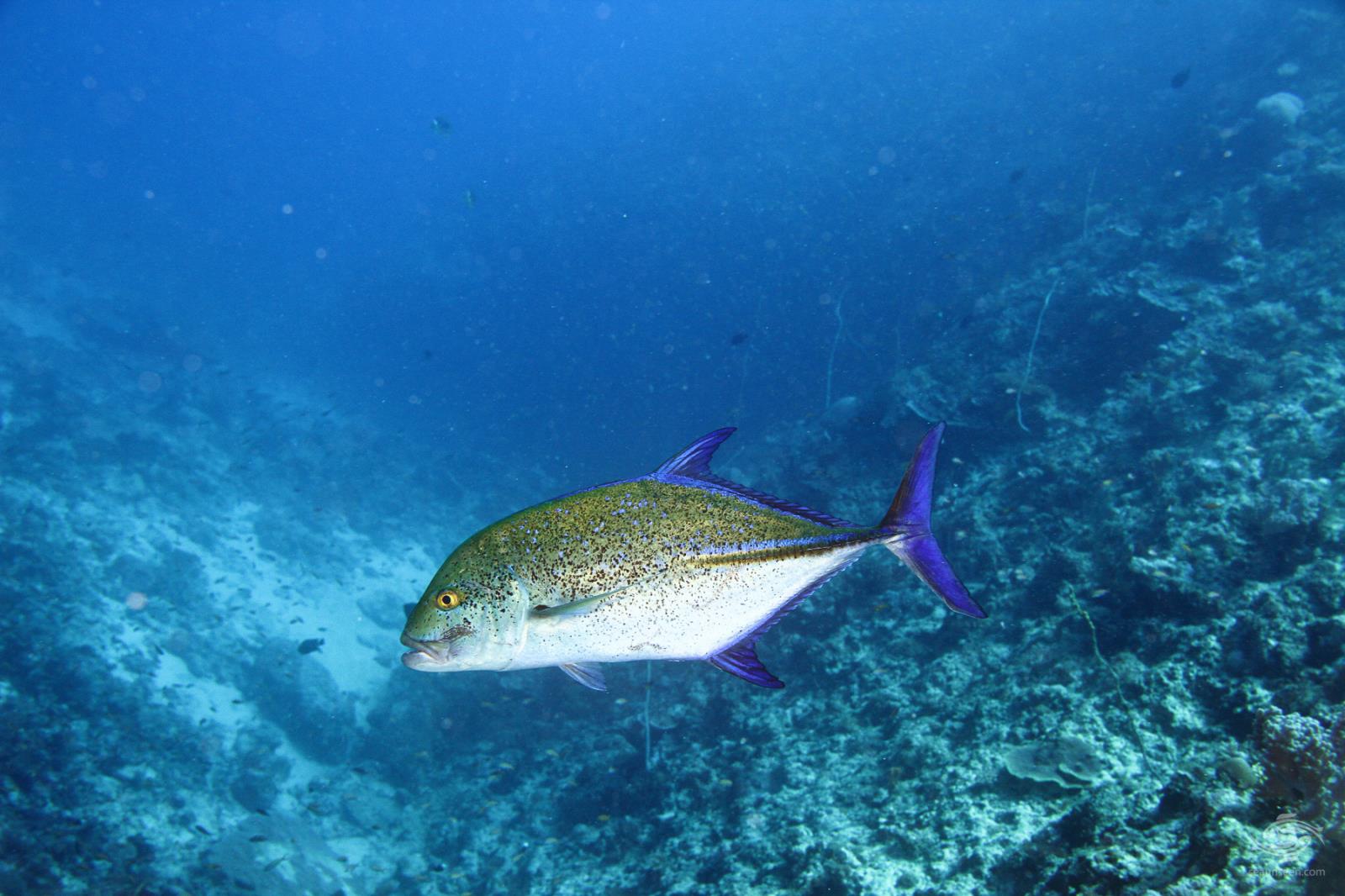