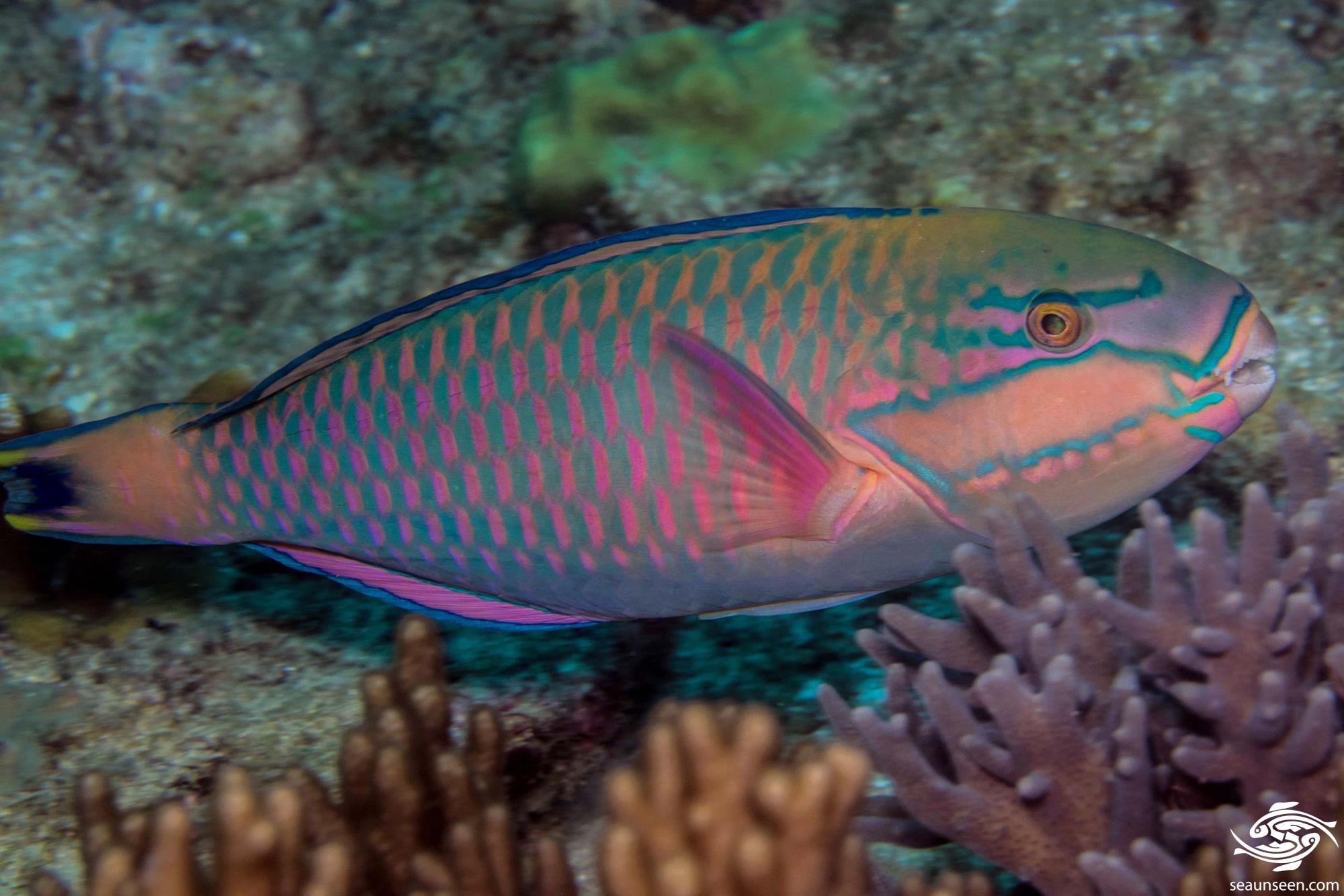 The Bluemoon parrotfish (Chlorurus atrilunula) is also known as the Black Crescent Parrotfish. They were described in 1984 by Randall and Bruce. Parrotfish obtain their name from their teeth which are fused into a beak.

Within the various species of  Parrotfish which are part of the Labridae family there is considerable divergence in looks between the juveniles and the adults. Additionally there are regional variations  in looks which combined with their ability to change their colors, particularly at night to some degree, creates a large amount of confusion as to which is which. There are few people who can conclusively identify all of them at each stage. 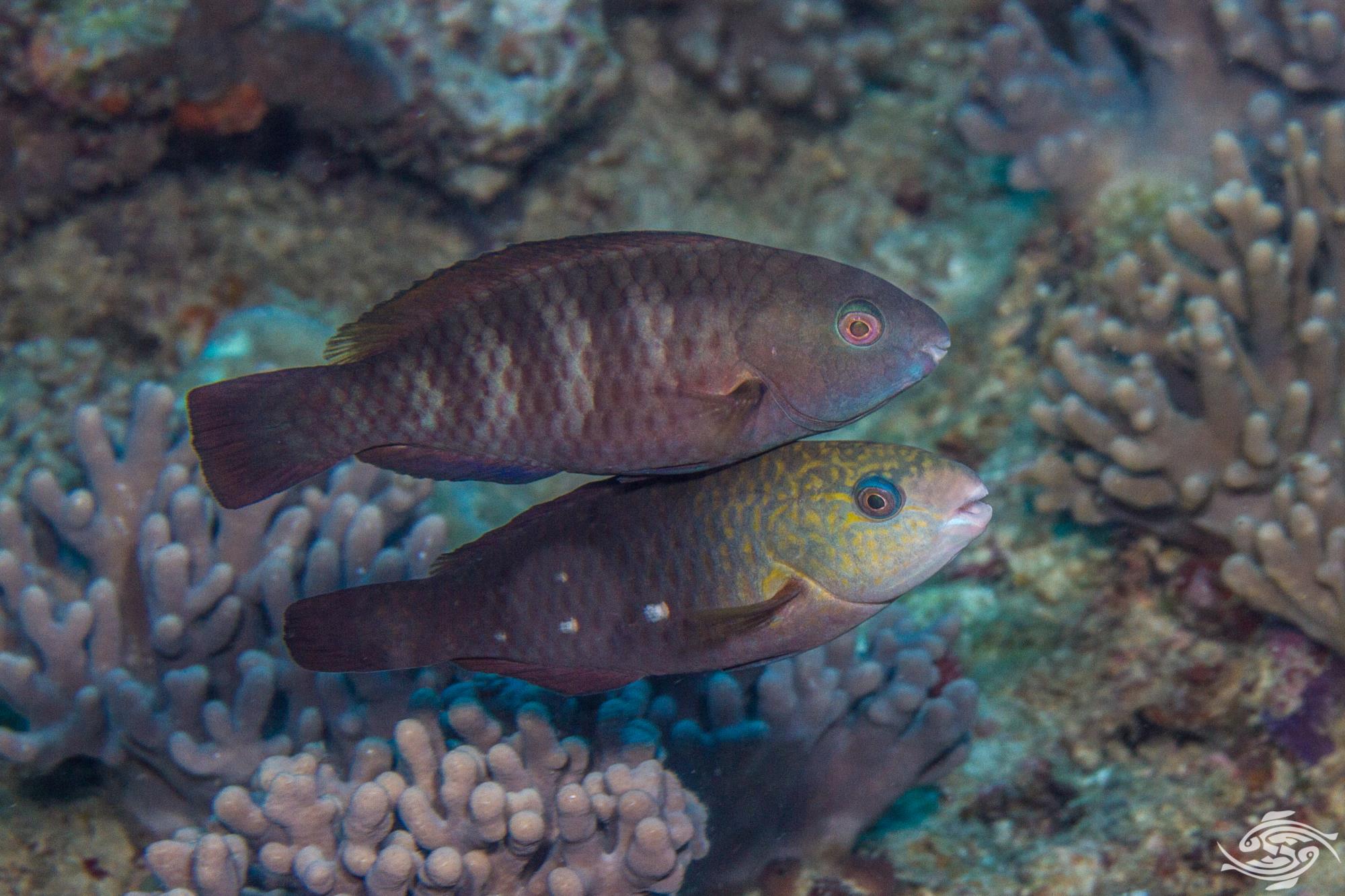 In Tanzania the smaller juveniles as pictured above swimming with a Bullethead parrotfish below it, are a light brown with five mottled darker brown bars on the body. The iris is red and there are some light colors around the mouth. As they grow so more colors develop on the mouth and they have the ability to change the background color to a light green blue color. This is pictured below. 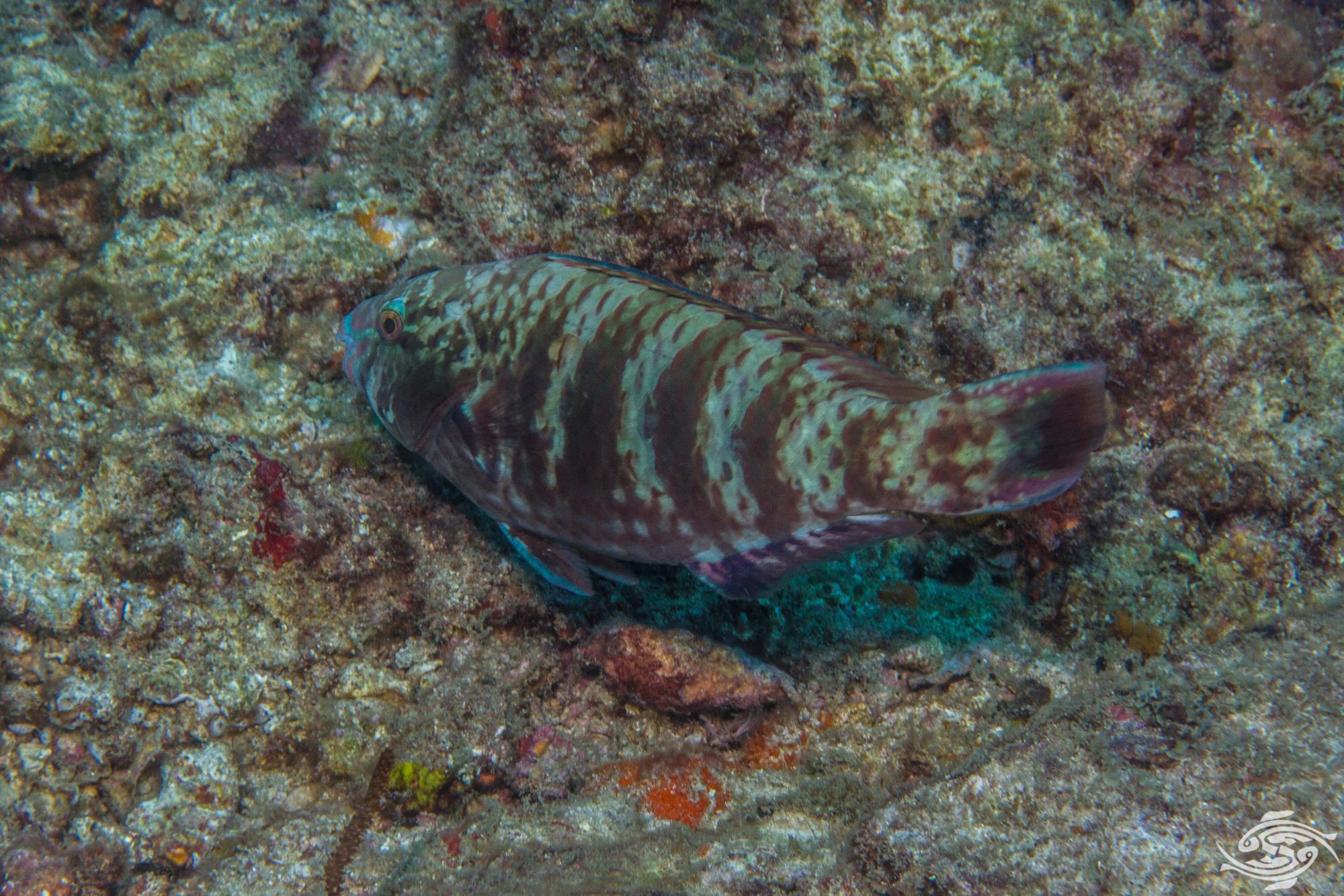 At night this blue green background color is more enhanced and slightly blue, we have only seen it this vivid at night. 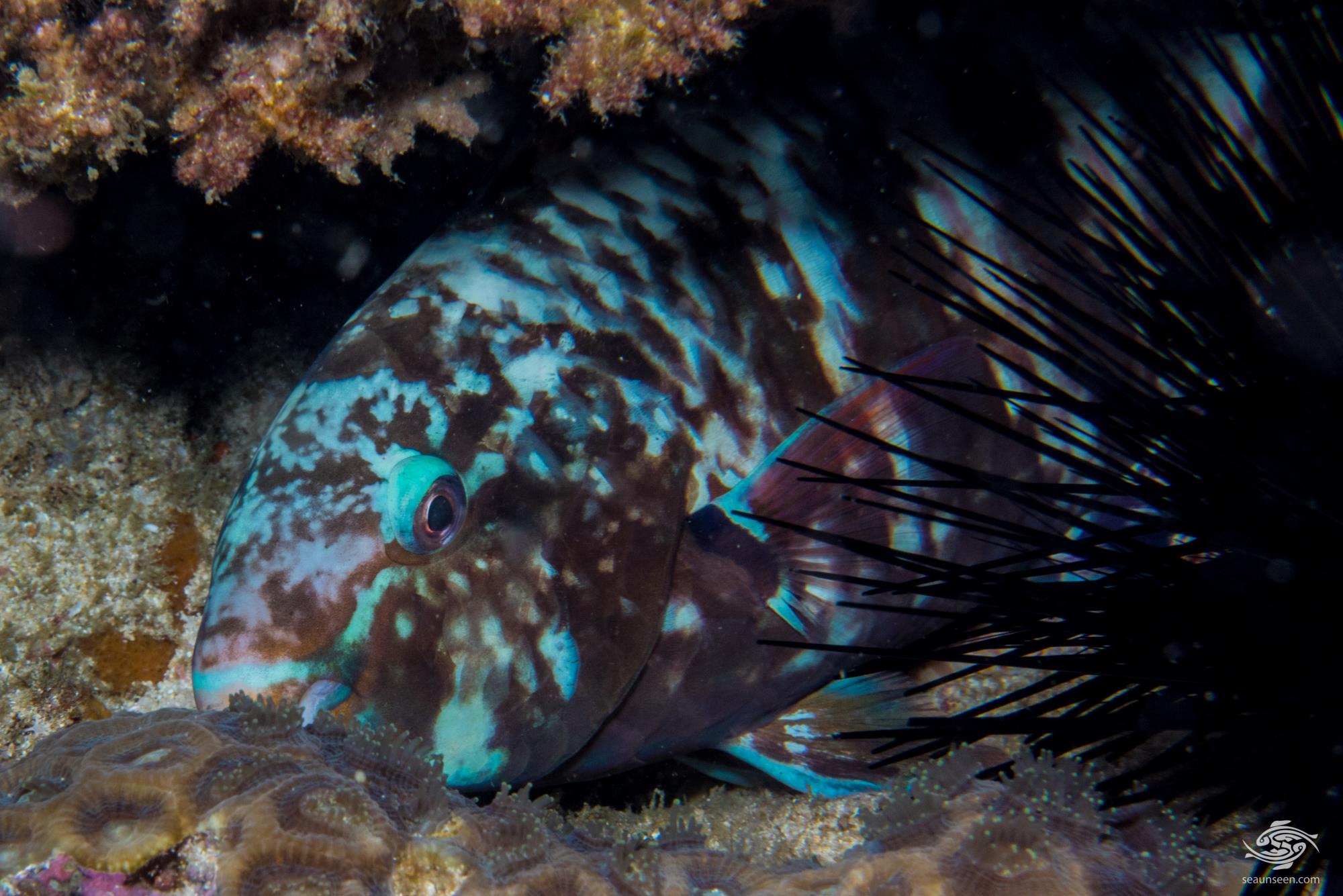 Some specimens develop green around the eye with light markings of blue and pink around the mouth. This may be part of the switch to the terminal phase. 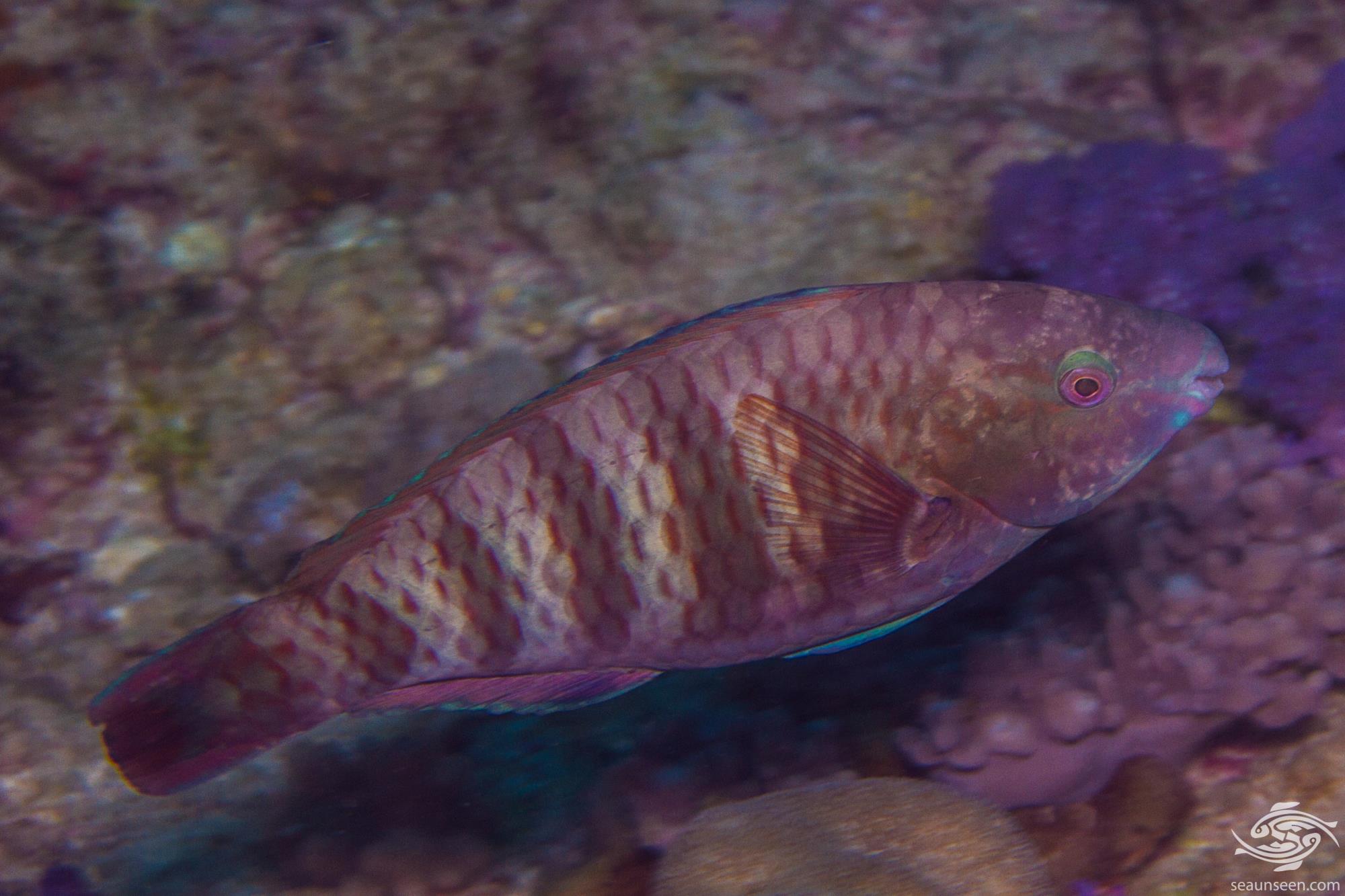 In the terminal phase in Tanzania the males are incredibly shy and it is very difficult to get near them to take pictures. They are usually found in areas with lower visibility and even when the visibility is good it is difficult to get within 15 meters of them. This may be because of the dynamite fishing which only stopped in 2017, or the fact that indigenous fishermen go after them with spears. A young Terminal phase male is pictured below. 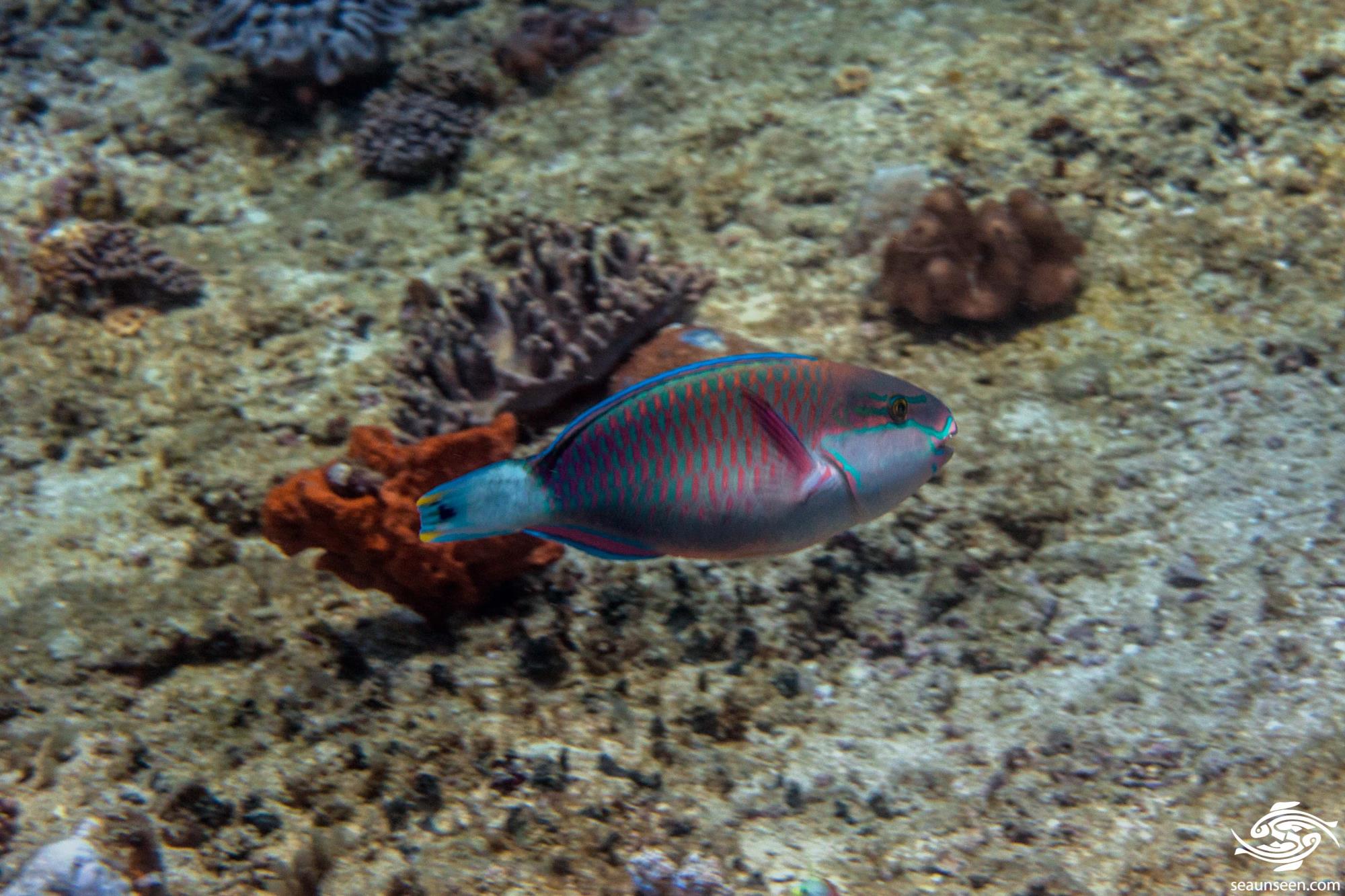 They are easily identified because of the white patch on the caudal area extending back onto the caudal fin. The body is usually green with pink edging on the scales and the caudal fin has a black crescent shaped mark on it but depending on whether the fin is extended or not, this is not always visible. The lower cheek is a whitish color and the upper portion of the head is a brownish purple color with two green lines across the eye. In the larger terminal phase males pictured below, the caudal area is more yellow or peach colored and a light yellow or peach colored patch develops on the lower cheek. 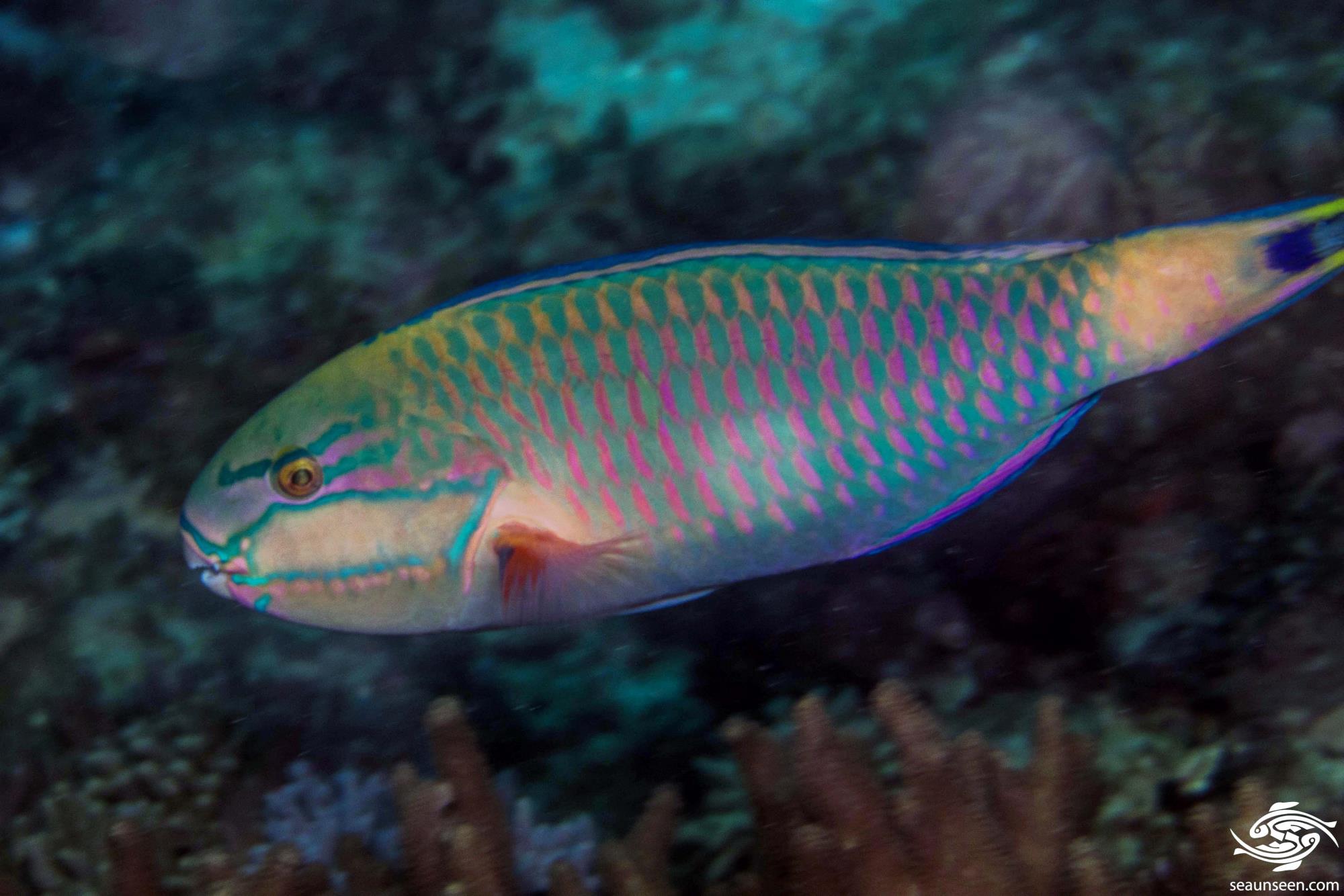 When the Terminal Phase Males are full grown their teeth protrude from the side of the face as pictured below. These are probably useful in threat displays with smaller males. 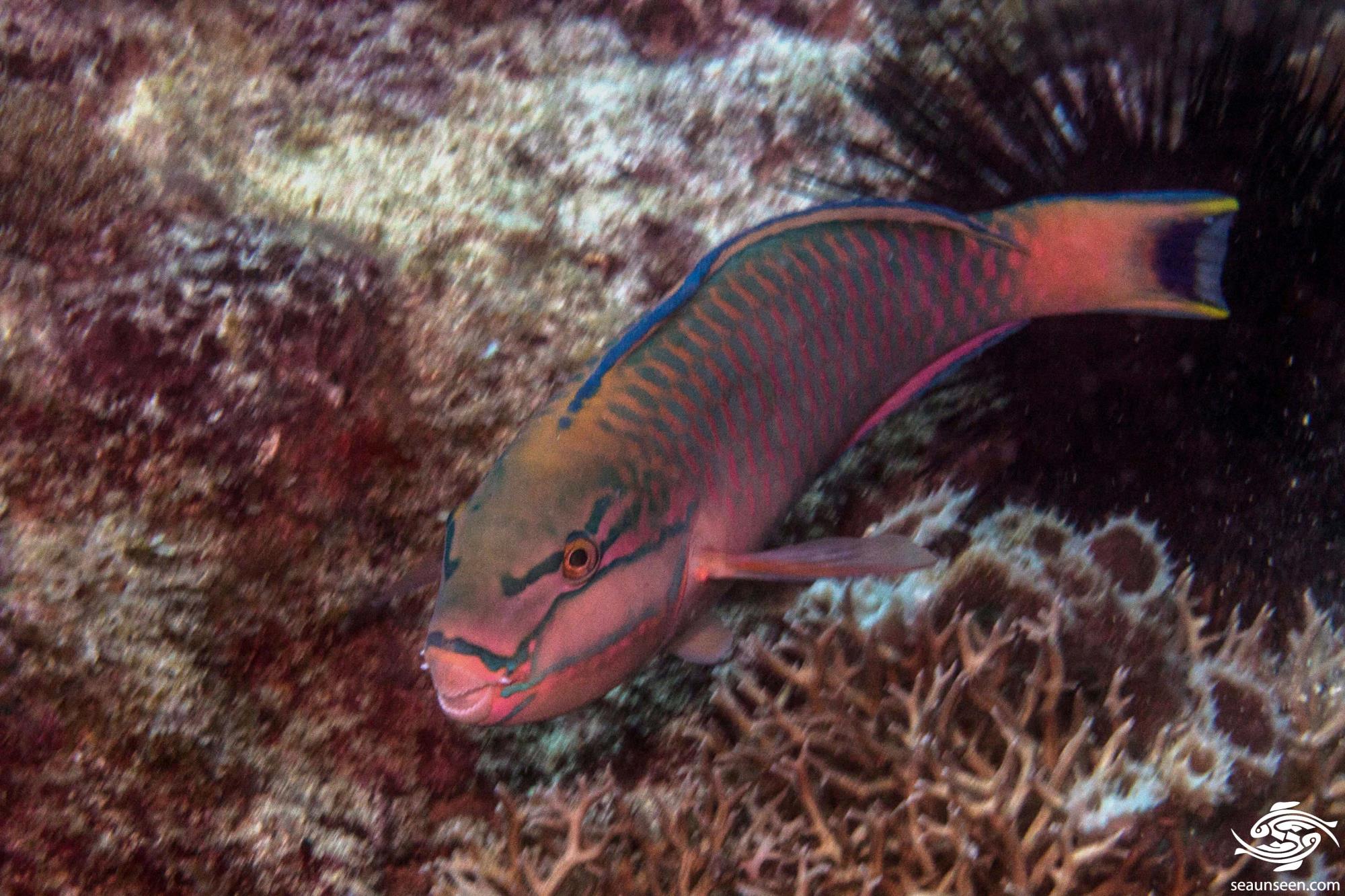 BLUEMOON PARROTFISH IN THE WILD

As a juvenile the Blue-barred parrotfish often feeds on the shallower reefs at around 10 to 15 meters with groups of Rabbitfish , Goatfish, Wrasse and smaller Surgeonfish.  Occasionally they are seen in small loose shoals.  As they mature so they continue this habit of feeding across the reef both with the aforementioned species and other parrotfish, in particular in Tanzania with the Bullethead parrotfish.

The initial phase specimens are sometimes seen in small shoals of two or three fish. As mentioned earlier the Terminal phase males are difficult to approach and we only see them on unprotected reefs at around the 10 to 12 meter range. Usually the visibility is poor in these areas. They appear to swim around a lot and always seem to be going somewhere at speed, possibly searching for females. Given the number of females one sees on the reef there are remarkably few males around. 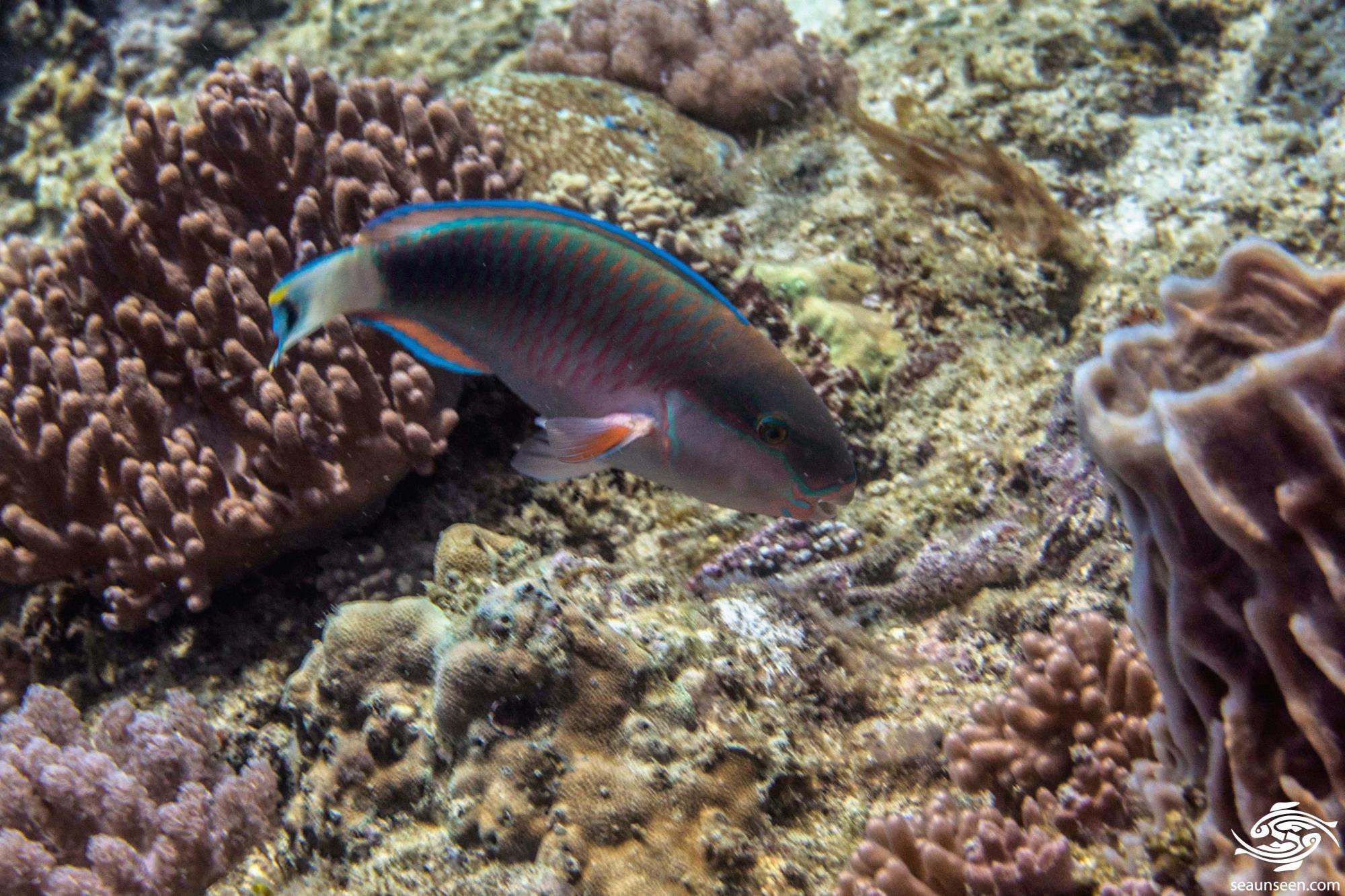 The Bluemoon Parrotfish is found only on the east African coast, Madagascar , Mauritius and the French territories above the Mozambique channel. Usually we see them on exposed reef flats at around 10 to 15 meters. 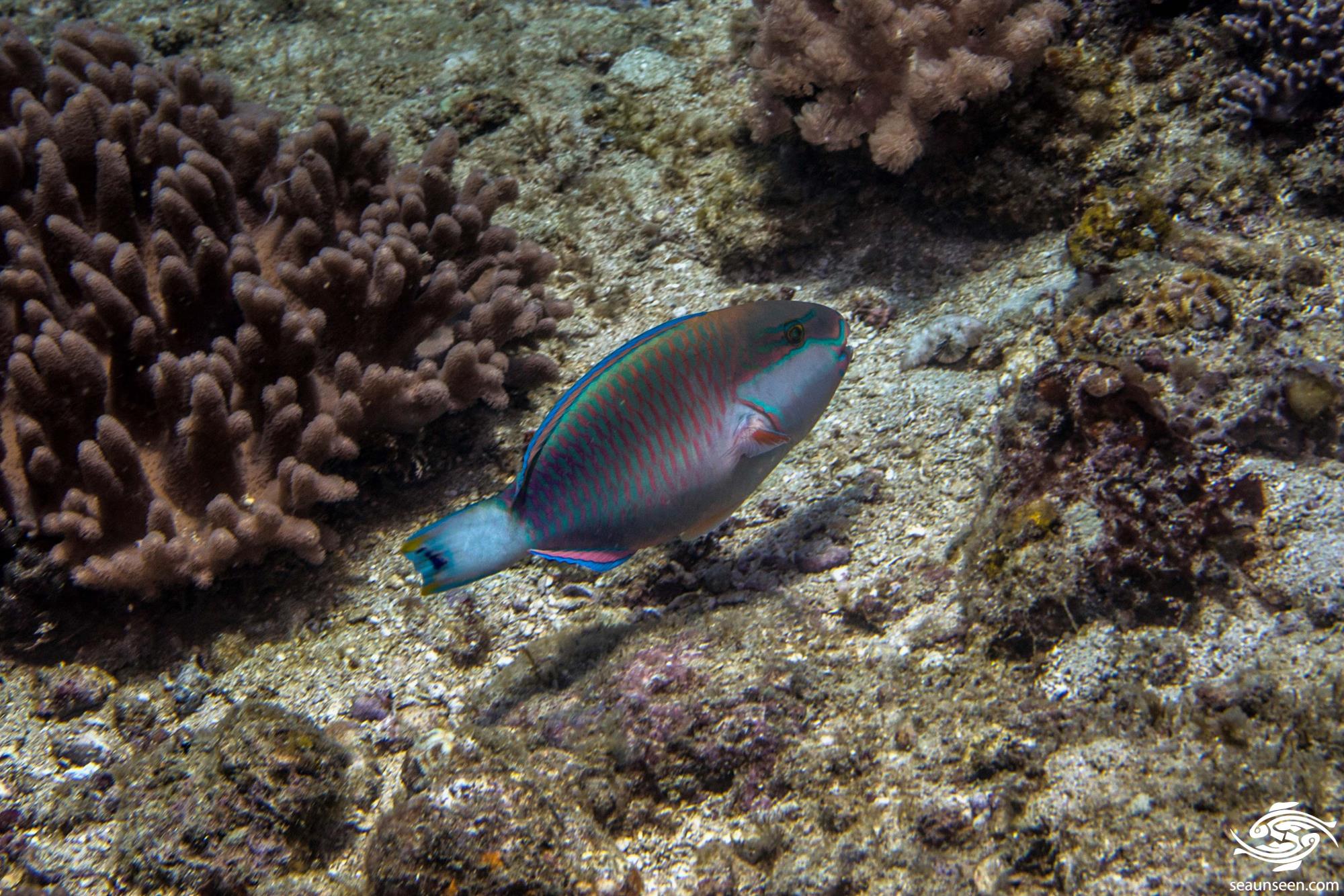 The Bluemoon Parrotfish feed on a variety of  filamentous algae which is scraped off dead coral using their powerful beaks. These scrapings which are mainly comprised of inorganic matter are further ground down by bony teeth plates and then go into a long specialized alimentary canal where nutrients are extracted.  The inorganic matter is expelled as fine sand. 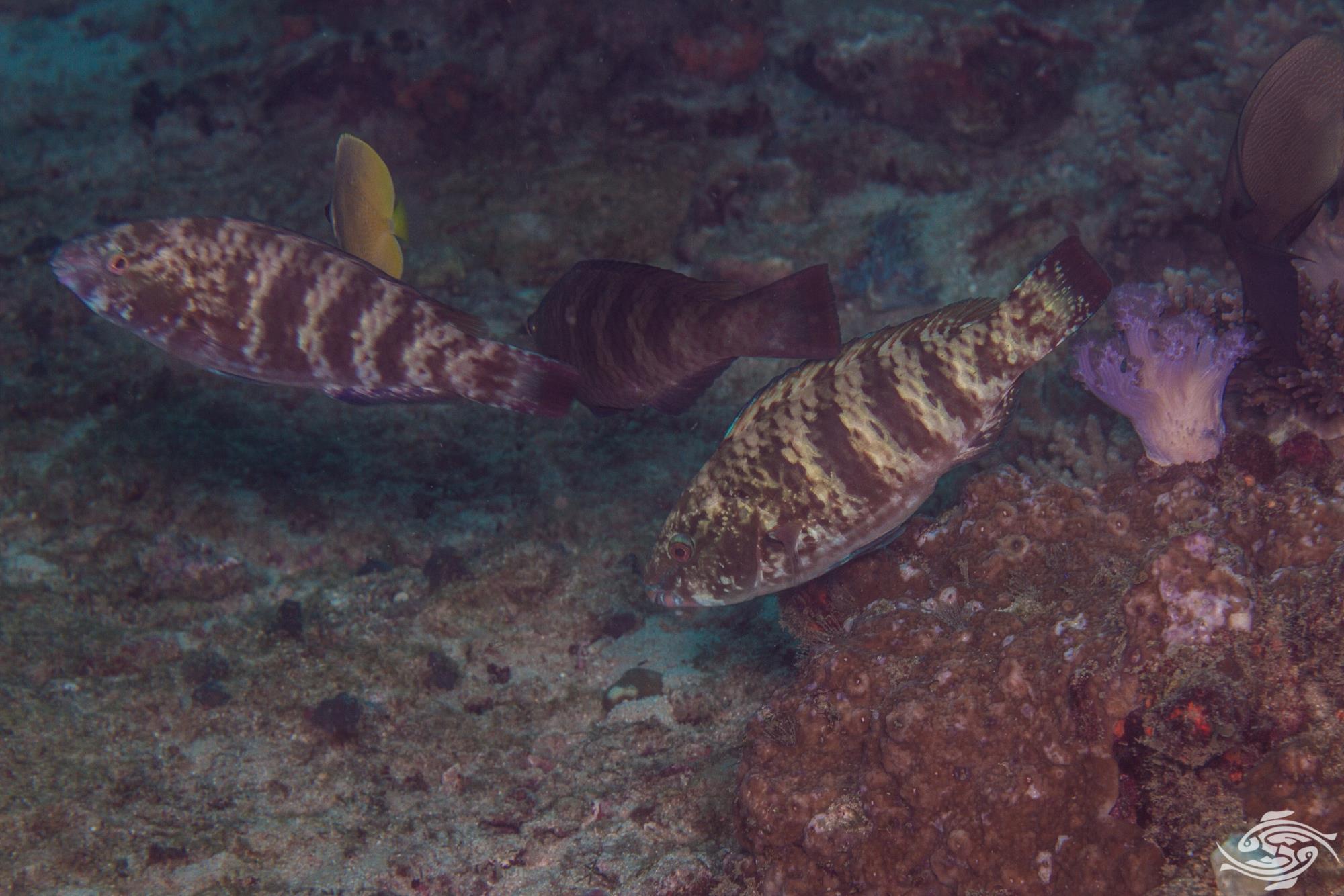 Secondary males are born female and change their sex when prompted by social cues such as the absence of another secondary male. These secondary males are often referred to as Supermales because of the brightness of their colors. Individual pairing takes place and the eggs are released into the substrate.

Interestingly in a genetic study done in the Philippines on other species of parrotfish, in three different areas full siblings and half siblings were found at sites more than 500 km apart. This indicates that the eggs or larvae are widely distributed by the currents.

One often sees interactions between male parrotfish and the larger males actively chase the smaller males when they come across them. Some  species engage in wrestling matches by locking teeth and swinging each other around. The smaller fish usually loses and swims off. 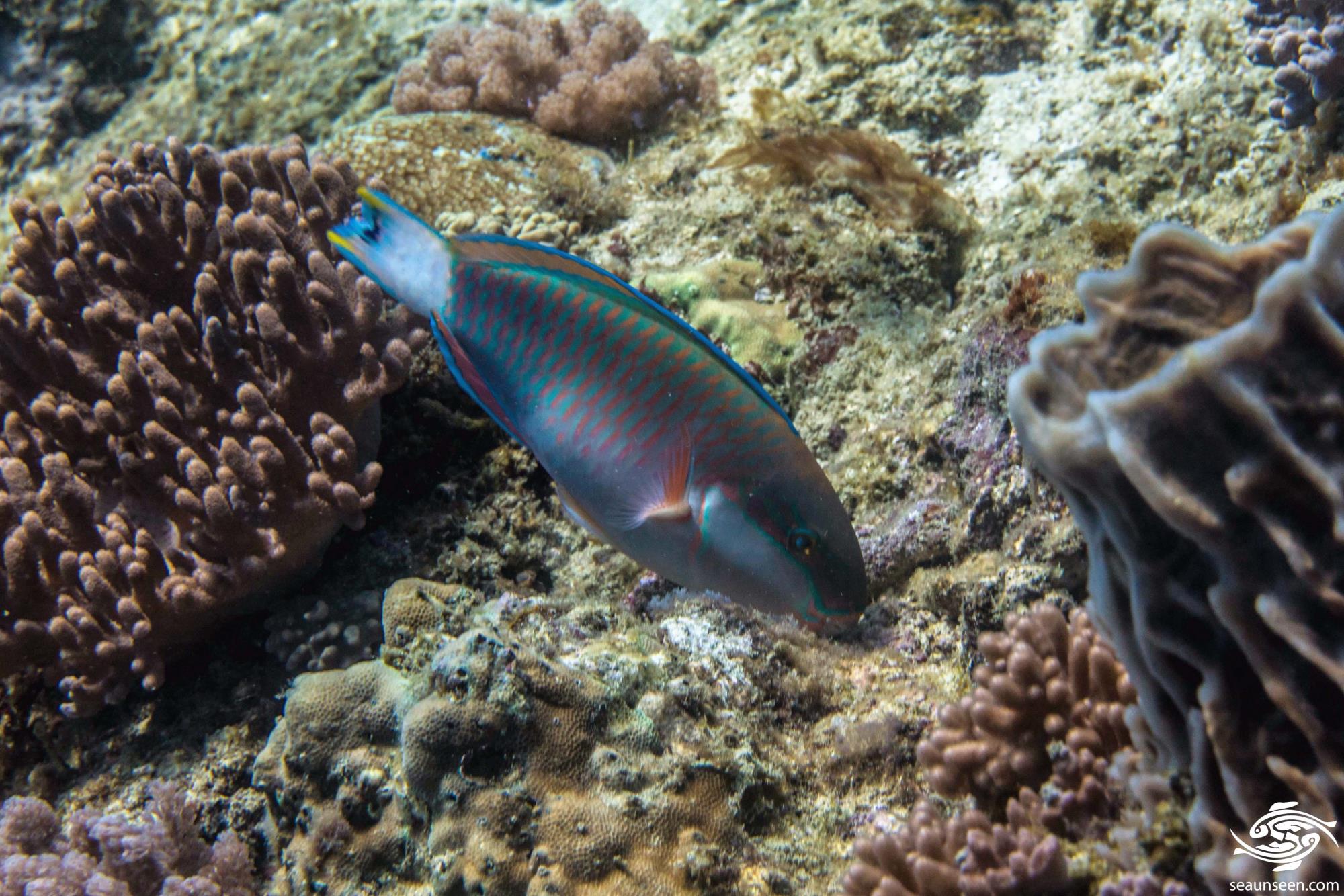 Bluemoon Parrotfish are not commonly kept in aquariums although some public aquariums may occasionally keep them for public display. This is both a function of their size and the difficulty in providing them with food. 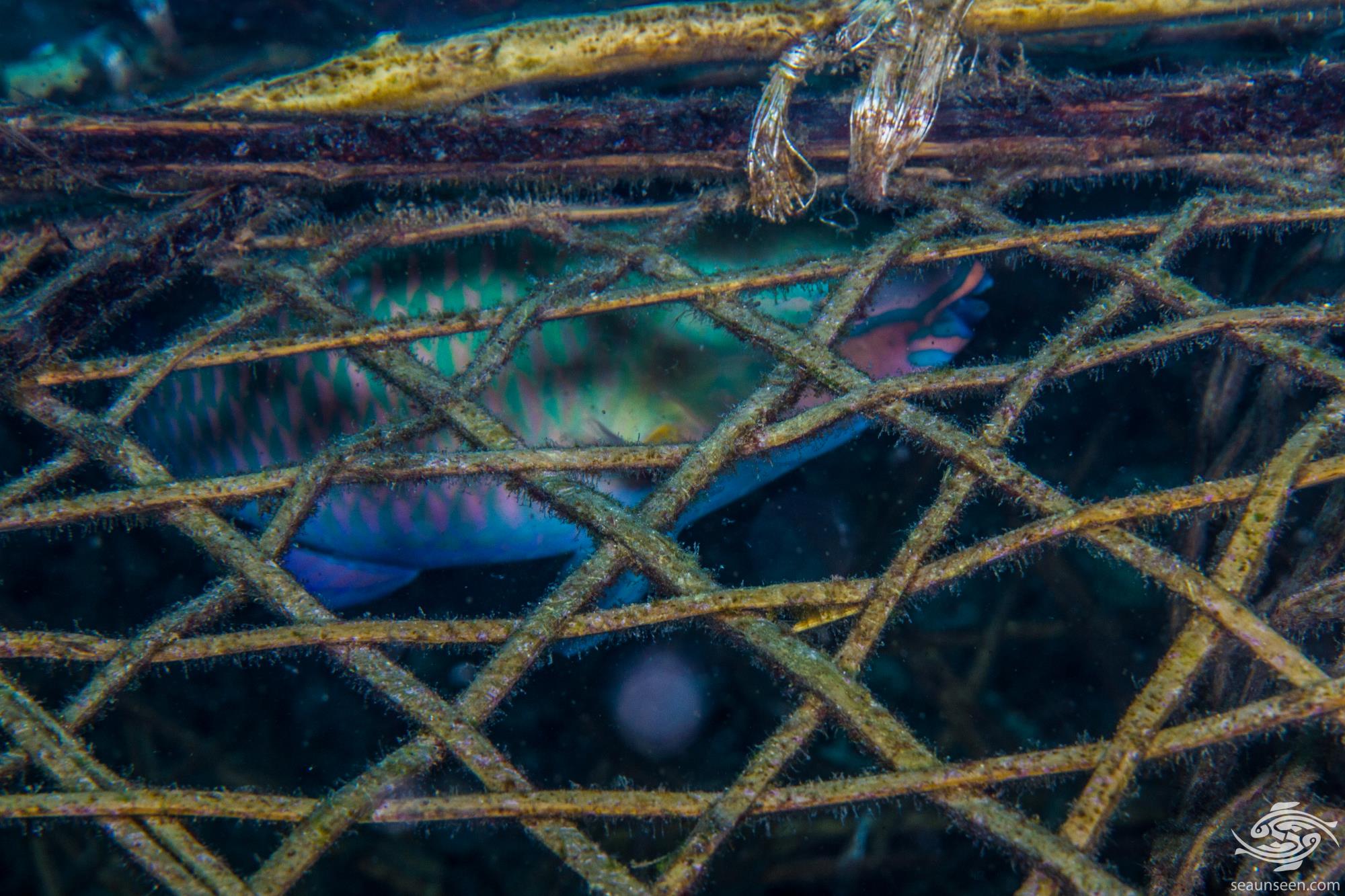 All the Parrotfish are heavily exploited in Tanzania both by trapping and netting. Parrotfish carry a heavy premium on price, particularly the blue parrotfish. They make very good eating as a rule. They are both trapped as seen above and caught in drag nets and speared.

Assistance from Elaine Heemstra in identifying some images.