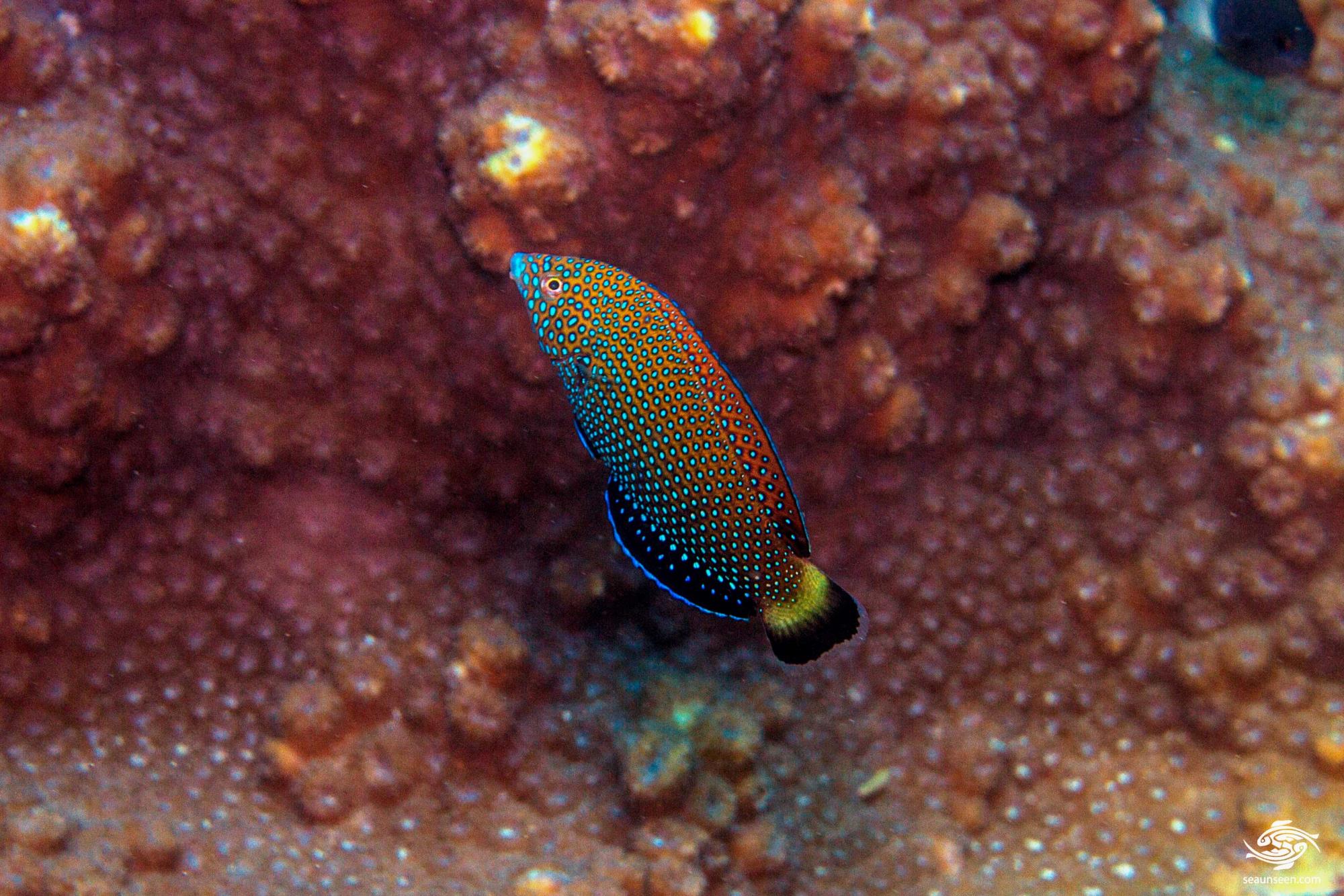 The Bluespotted wrasse (Anampses caeruleopunctatus) is also known as the Bluespotted Tamarin, the Diamond Wrasse and the Bluefreckled Wrasse. The juveniles are known as leaf wrasse in many areas from their habit of copying the movement of floating debris close to the substrate.

As with all fish in the Anampses genus, they have a single pair of projecting teeth giving them another of their common names in Australia of the Spotted Chiseltooth wrasse. They undergo dramatic changes from juvenile to adult and have three major distinct color variations with a crossover between each variation. To put this into perspective, the genus once contained 32 species and today contains 12 recognized species.

The Genus was introduced in 1824 and Ruppell was responsible for describing this species in 1828.  They are the most widely spread species in the genus, with most species having relatively small ranges.

The small juveniles have two distinct forms of coloration, these are pictured below in various sizes.  Some juveniles are whitish brown and others are dark.  At this stage the juveniles swim sideways from side to side in a motion that mimics that of a leaf being swept around by the current hence their common name of Leaf wrasse.  Juveniles of other species such as the Rockmover wrasse (Novaculichthys taeniourus) also exhibit this type of behavior and are also known as Leaf wrasse in the juvenile stage. As can be seen in the images of Bluespotted wrasse below there is considerable variation in the coloring of the small juveniles. 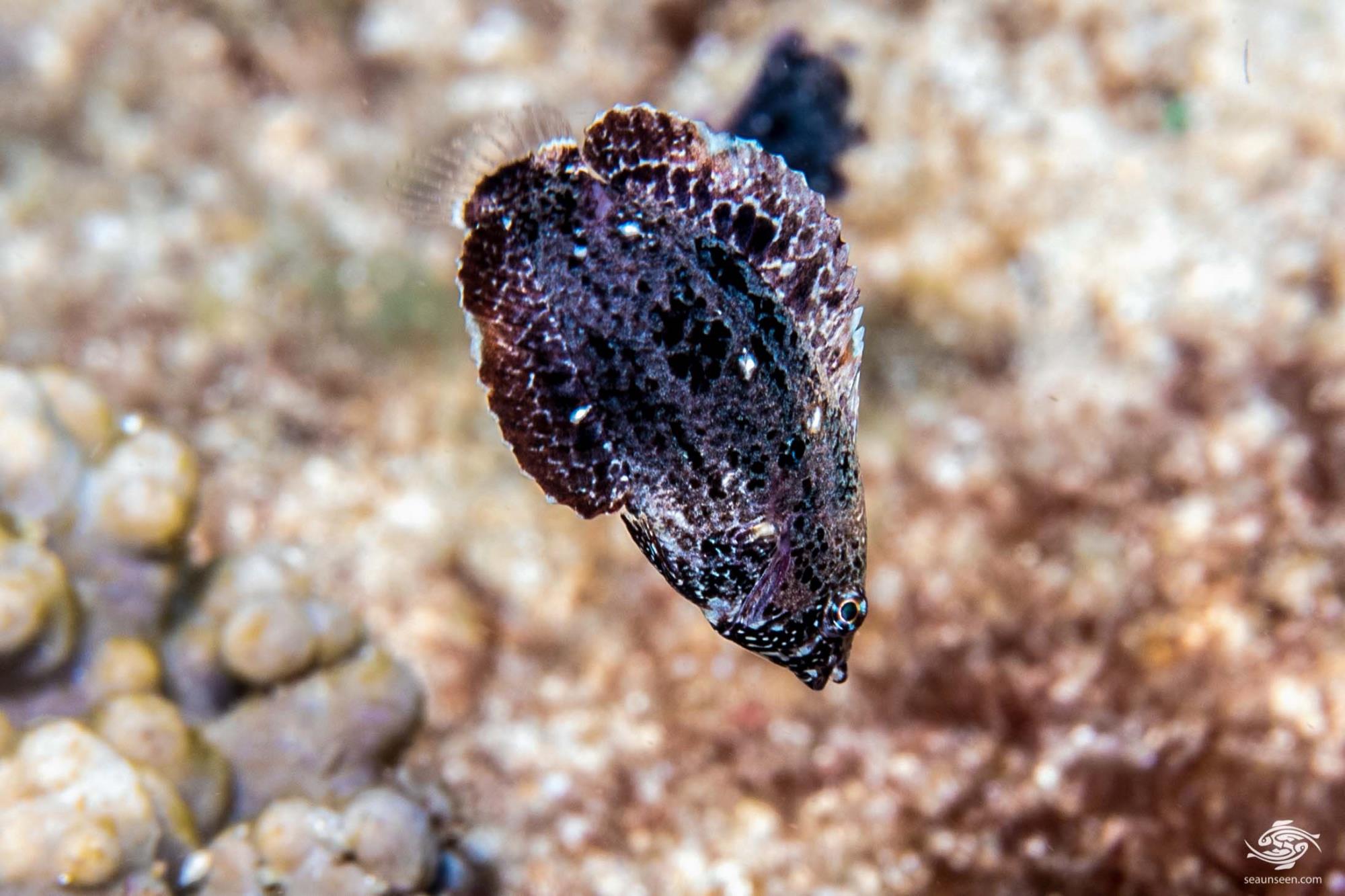 These specimens are all in the 1 to 3 cm range 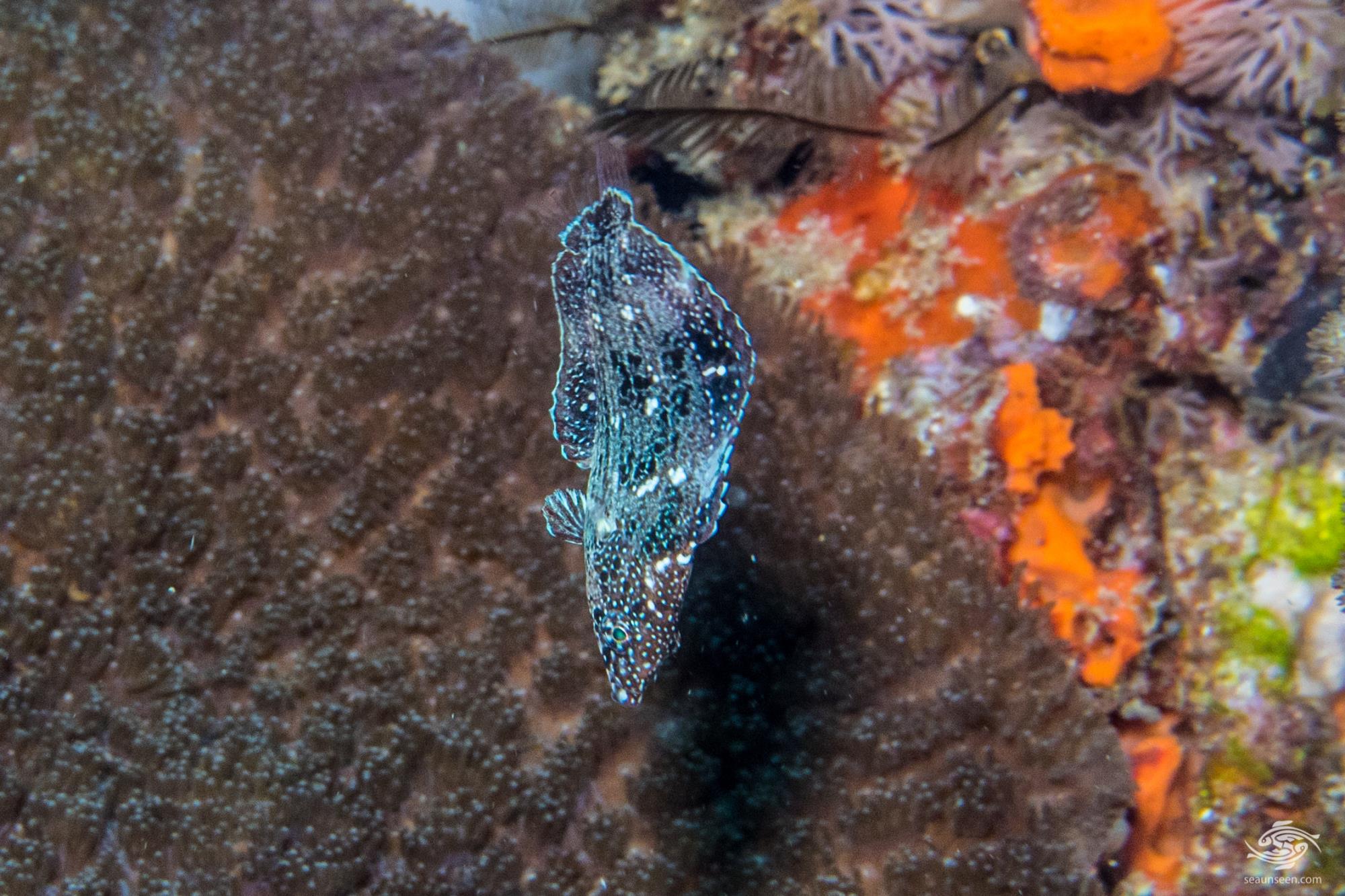 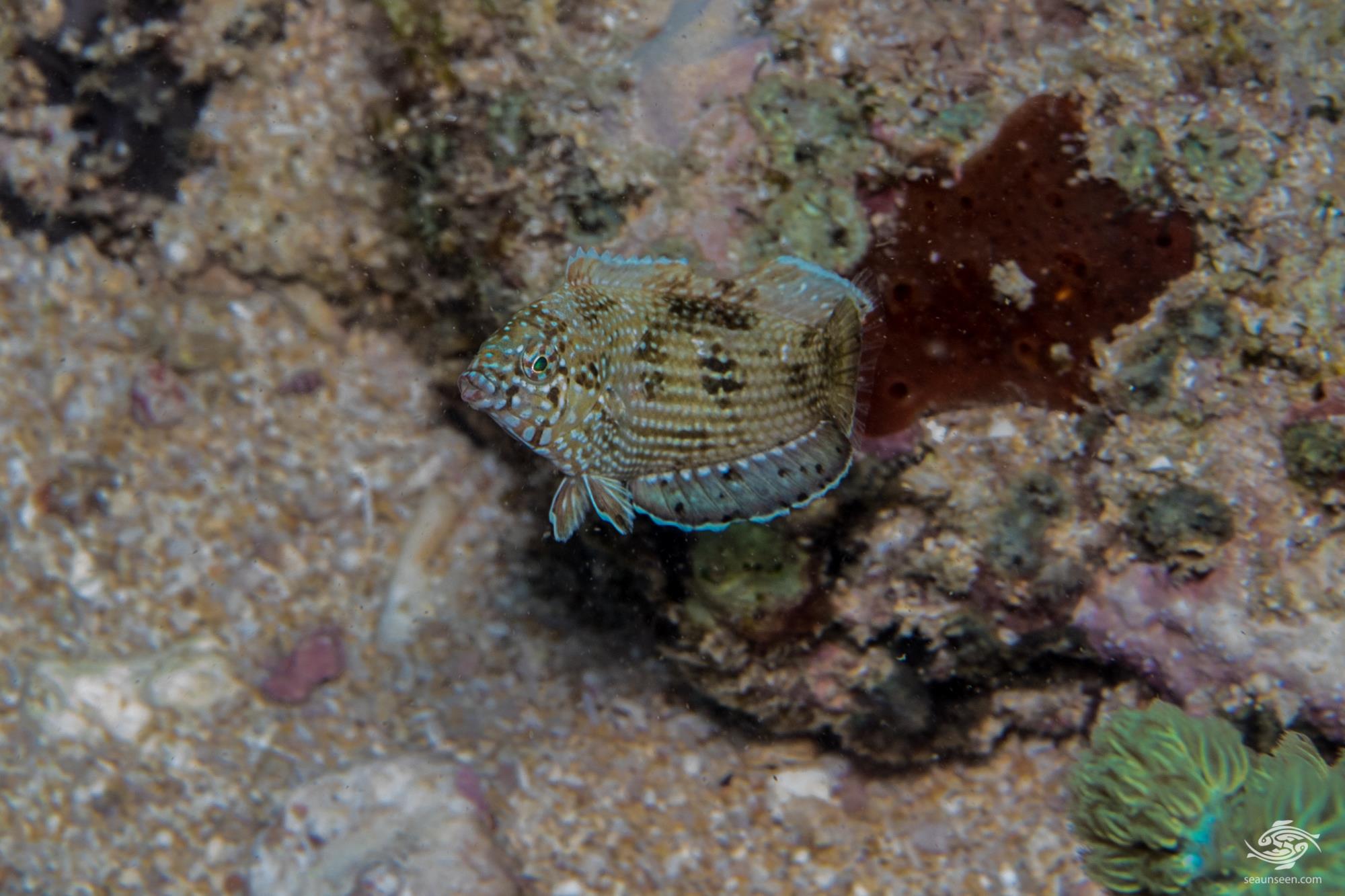 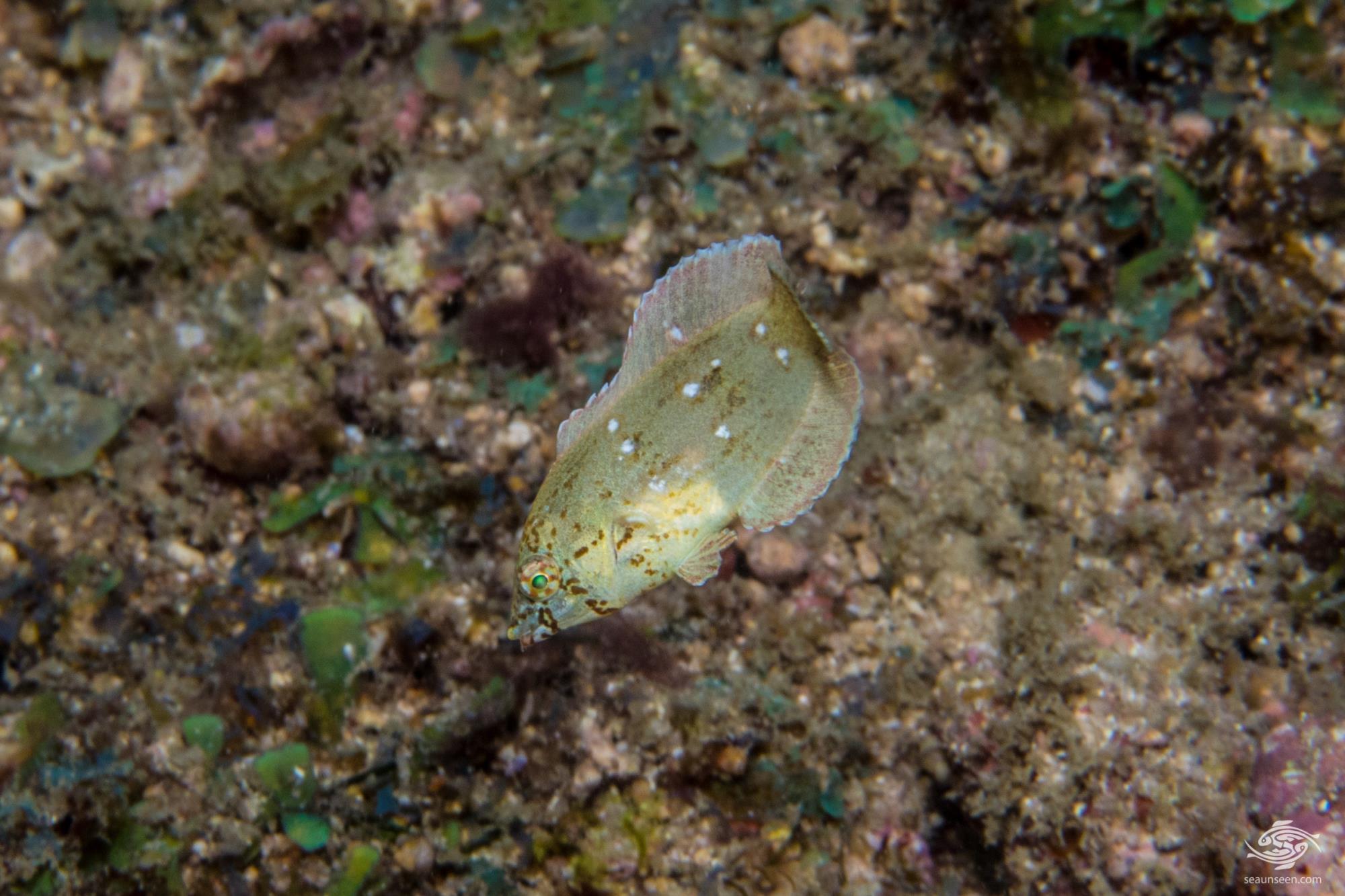 From the small juvenile stage above, the body darkens and distinct lines of blue dots develop along the body.  This interim stage can be seen below. Yellow is just starting to develop in the caudal area and the lines of dots that give them their common name are developed but at this stage they are yellow. 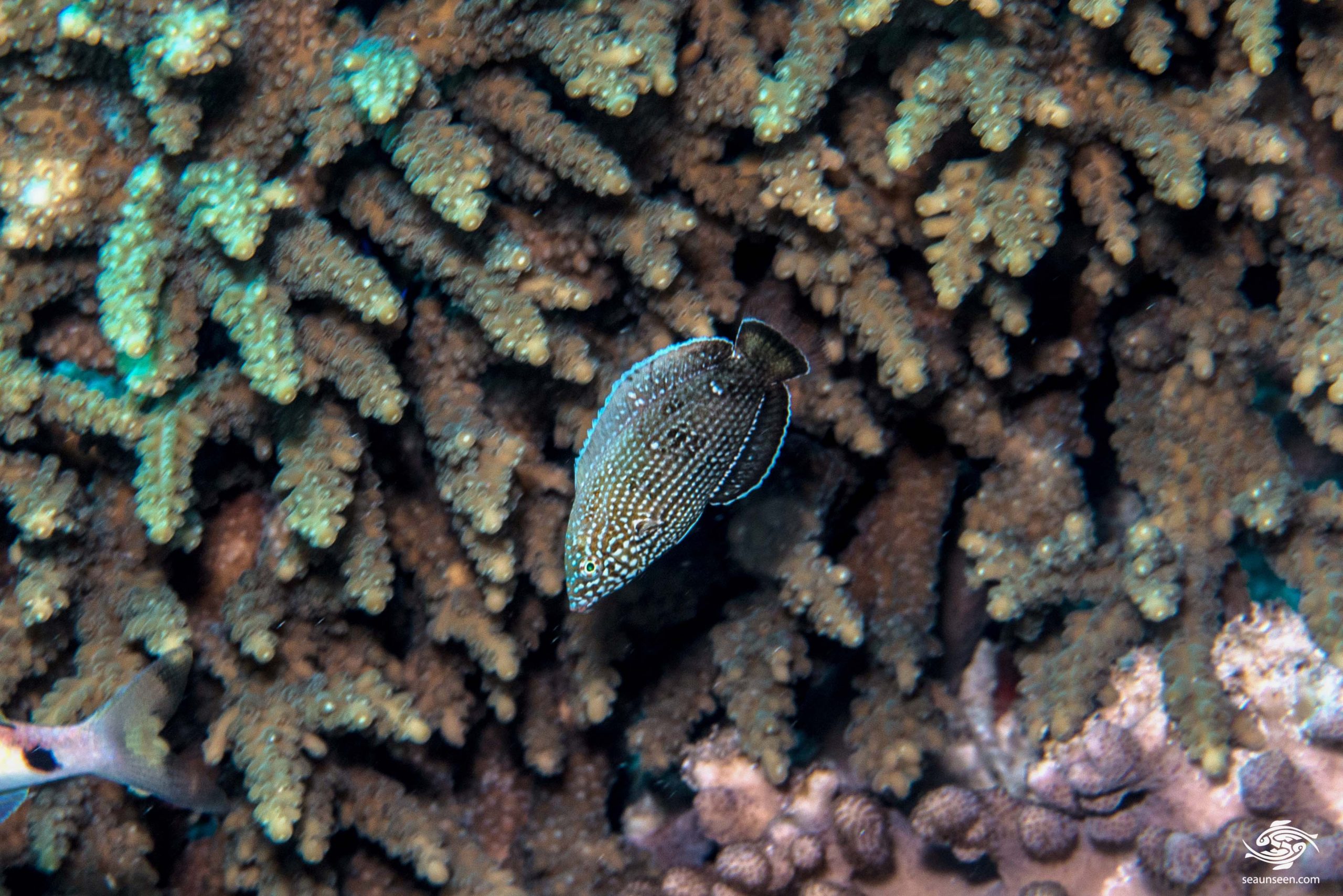 The various stages of development going forward can be seen in the image below.  Note how the dots darken and go blue with age. 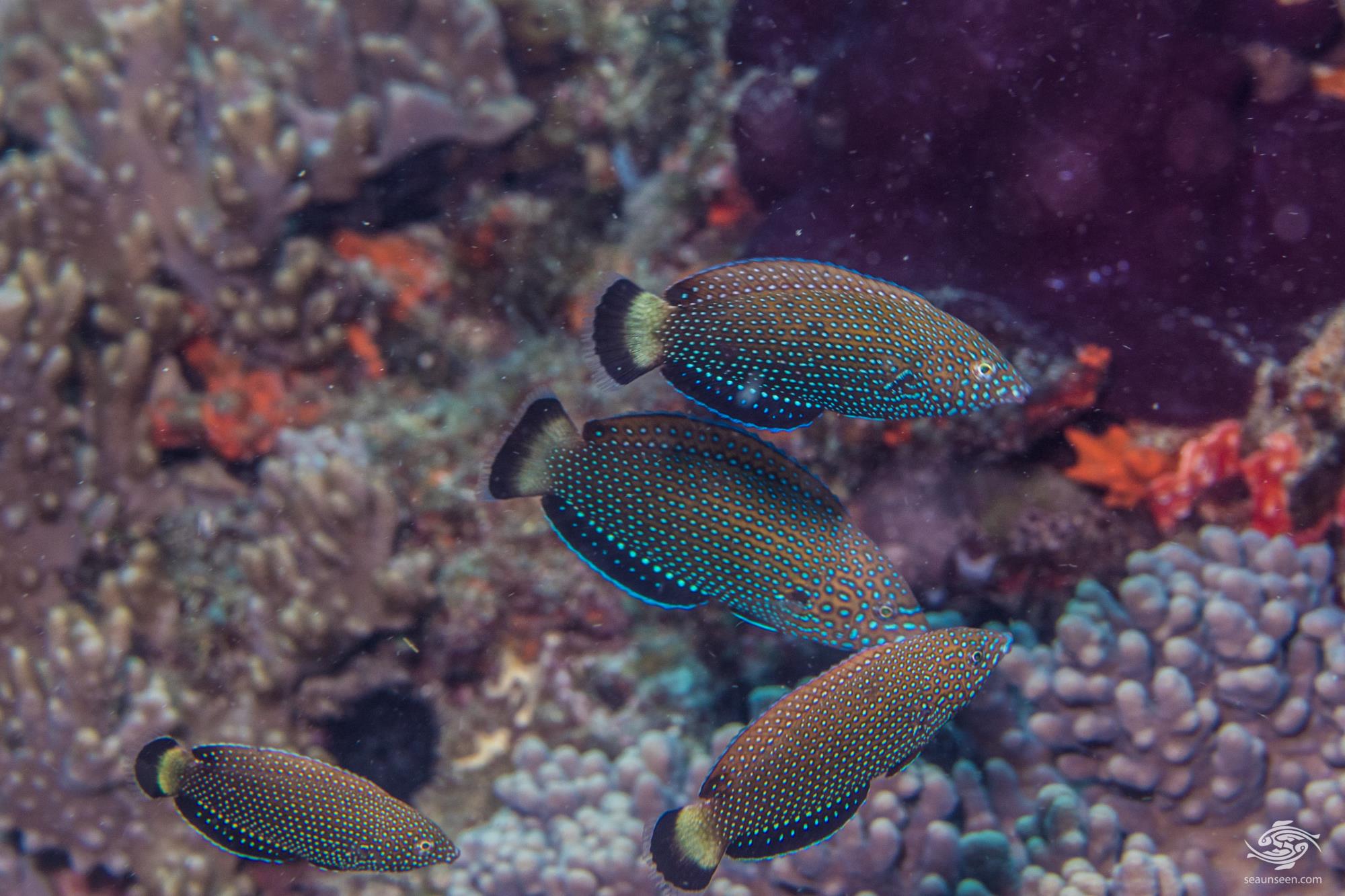 From this stage blue lines begin developing in the facial area. 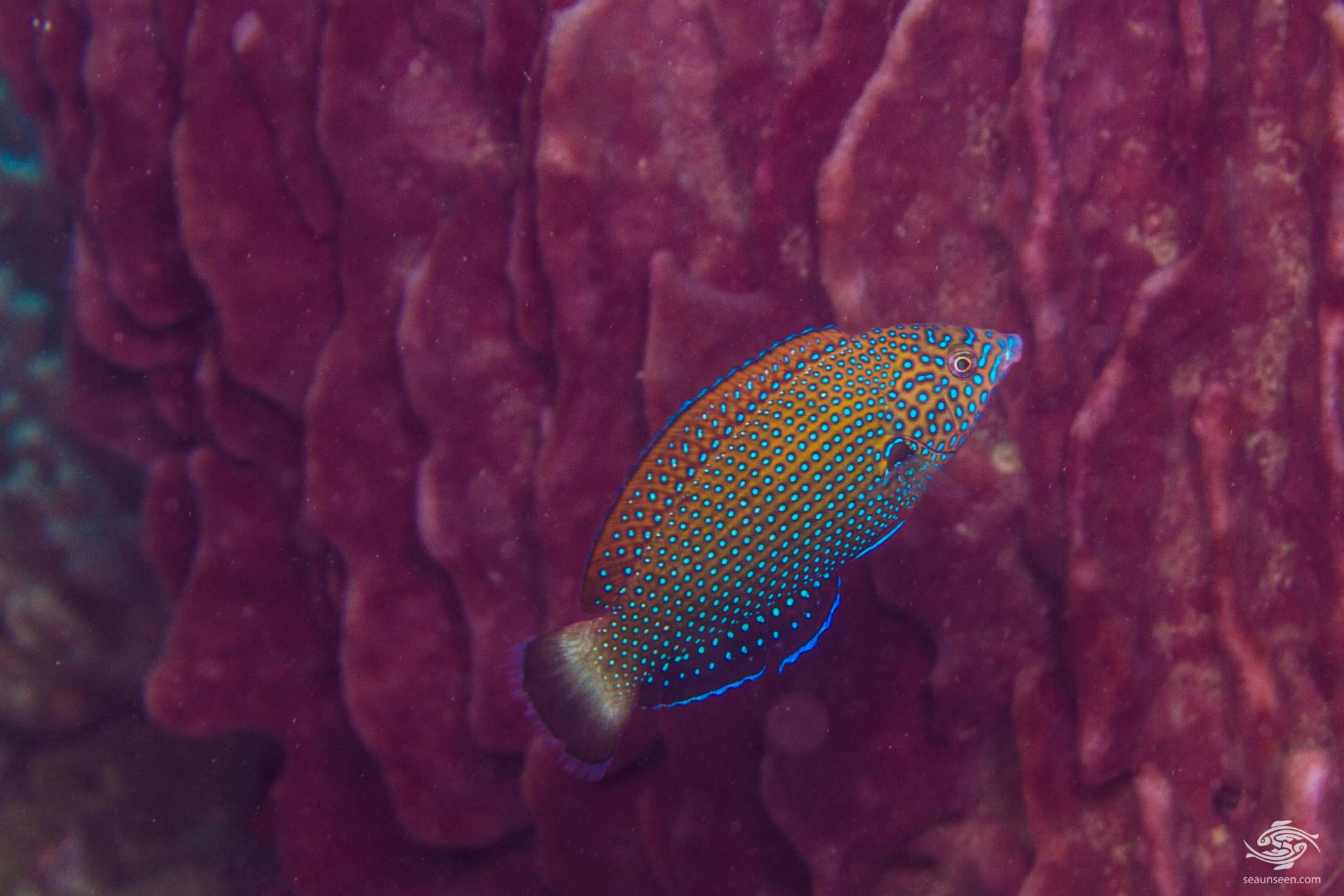 As the fish grows so the blue lines become more prominent and at this stage the fish is in what is described as the Initial phase and is a female. 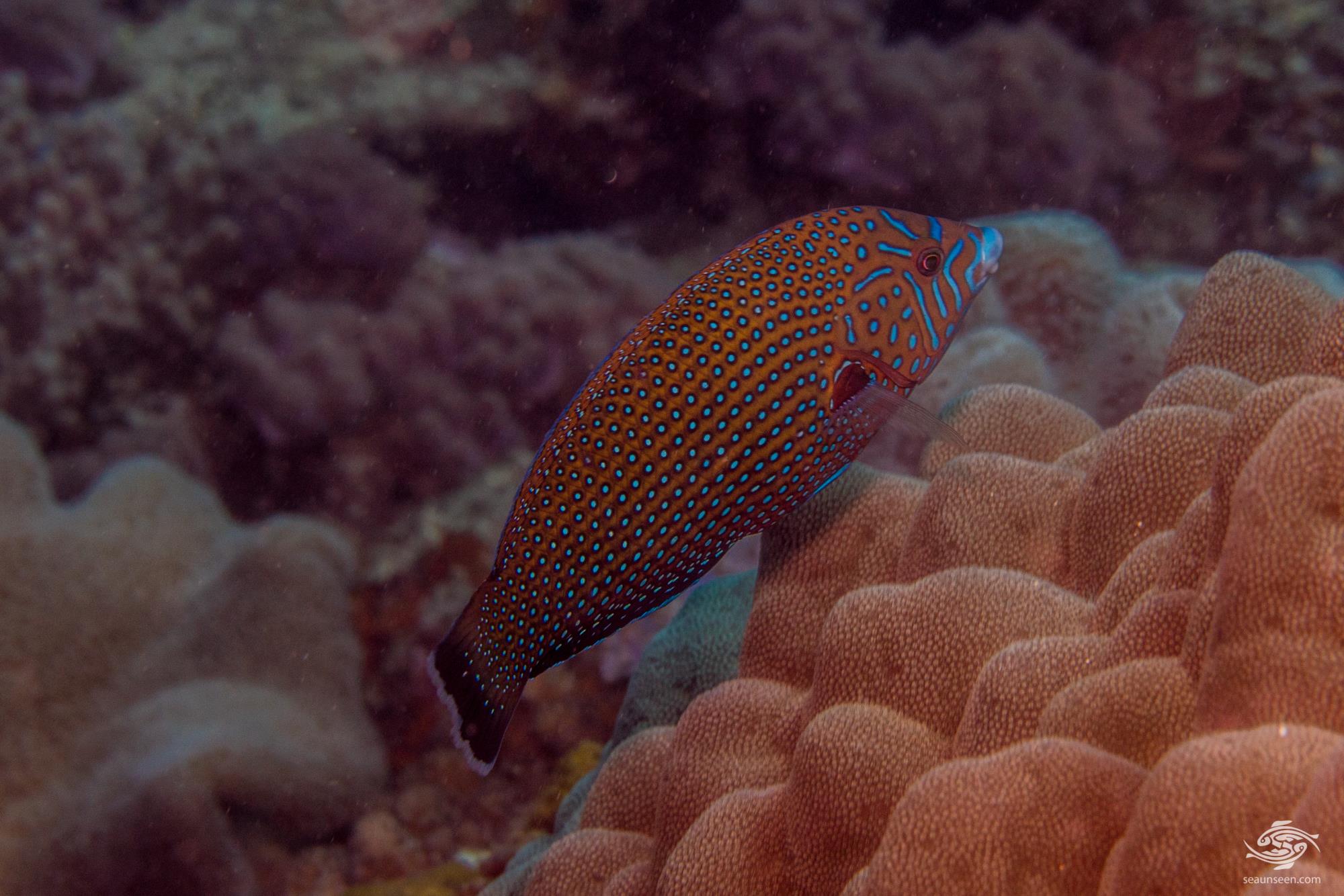 Very few of the females transform into the terminal phase males pictured further below, we have seen some females begin changing shape with the body deepening and presume this is part of the change into the Terminal phase male. This can be seen in the image below. 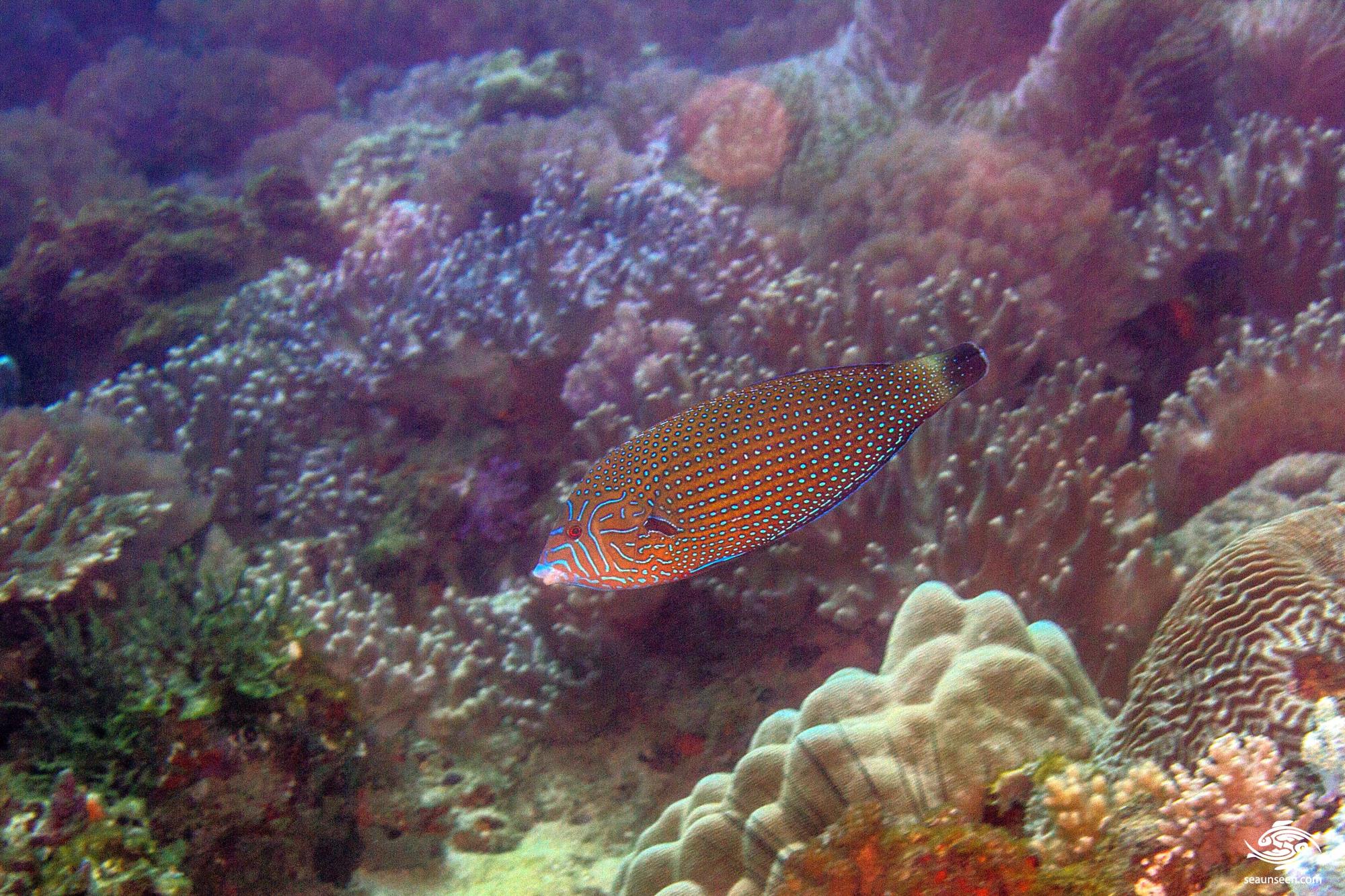 On the Terminal phase male, the body is deeper and the head is dark blue/blackish and the rear is bright blue/green with a bright yellow green line separating the two colors. The lips are prominently blue. Certainly in Tanzanian waters there are very few males around and they are extremely reclusive heading off as soon as they see a diver.  They grow large, reportedly up to 42cm but the largest we have seen have been in the 30 to 35 cm range.  At these sizes it is easy to mistake them for a Parrotfish from a distance. 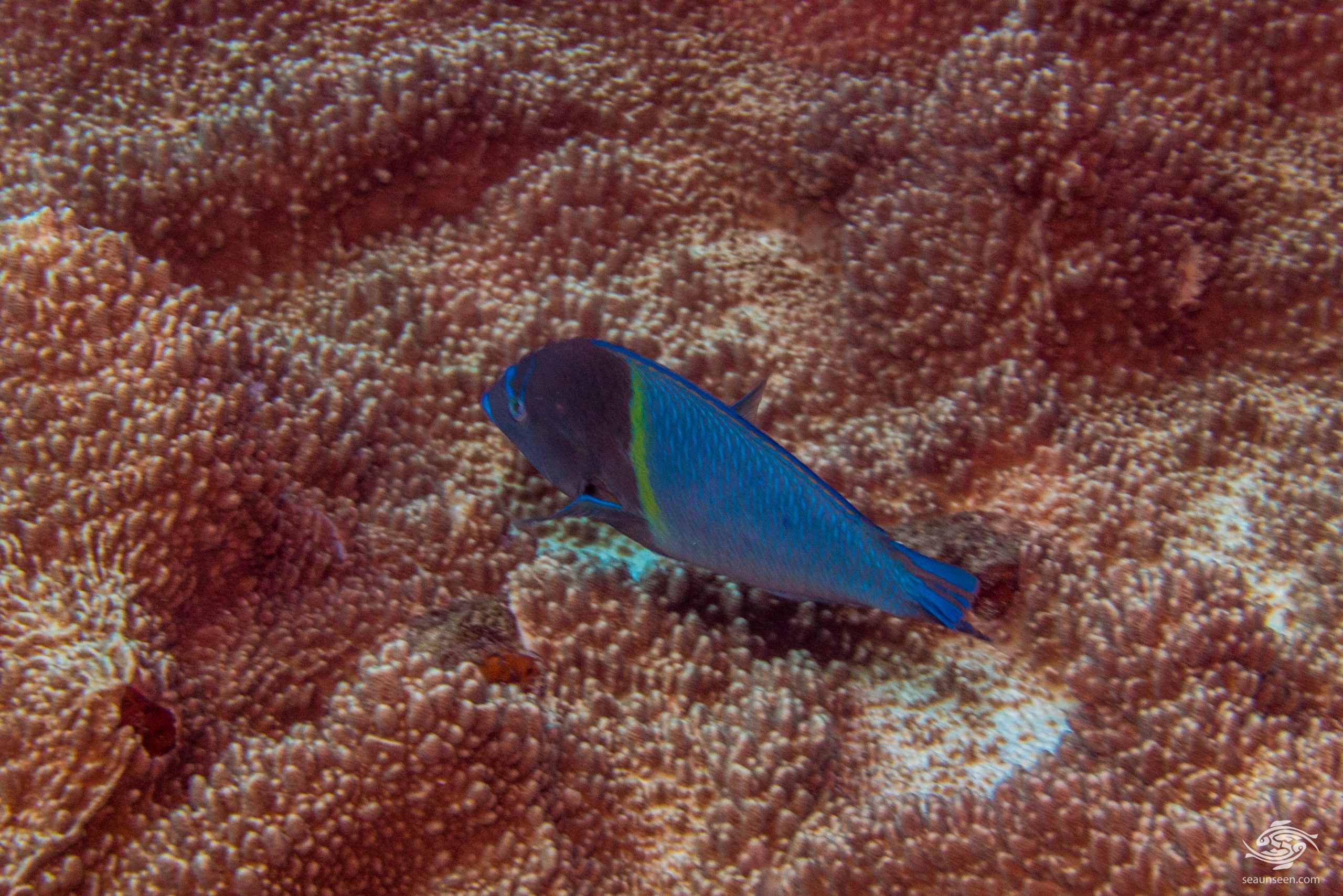 BLUESPOTTED WRASSE IN THE WILD

The Bluespotted wrasse is fairly common on Tanzanian reefs between 10 and 15 meters.  During the end of summer between December to March large numbers of the solitary juveniles can be seen on the bottom imitating floating leaves.

As they grow larger so they begin forming groups, the individuals in these groups often vary considerably in size and there tend to be of no more than four or five specimens.  They feed together and often swim with other Anampses species , in particular the Lined wrasse.

The males which are larger are always singular and are far more active and patrol the reef at high speeds. There are very few males around and they are incredibly reclusive. If the visibility is good because of their bright coloration they are easy to spot. They appear to have very large territories that they patrol within which there are large numbers of females gathered in groups of three to five specimens.  At all stages they are constantly on the move.

When threatened they will attempt to hide under rocks or corals but if there is no cover around will dig into the sand and hide there. At night they bury themselves in the sand to sleep. They are extremely active fish , always on the move feeding constantly.

The Bluespotted wrasse is found from the East African coast across to Southern Japan,  south to Australia and the central Pacific, but are not found in Hawaii, having a relatively large range. They are mainly seen on reef tops and on mixed rubble/rocks/coral areas. They seem more common around the 8 to 12 meter range in Tanzania. We have never seen one deeper than 18 meters. 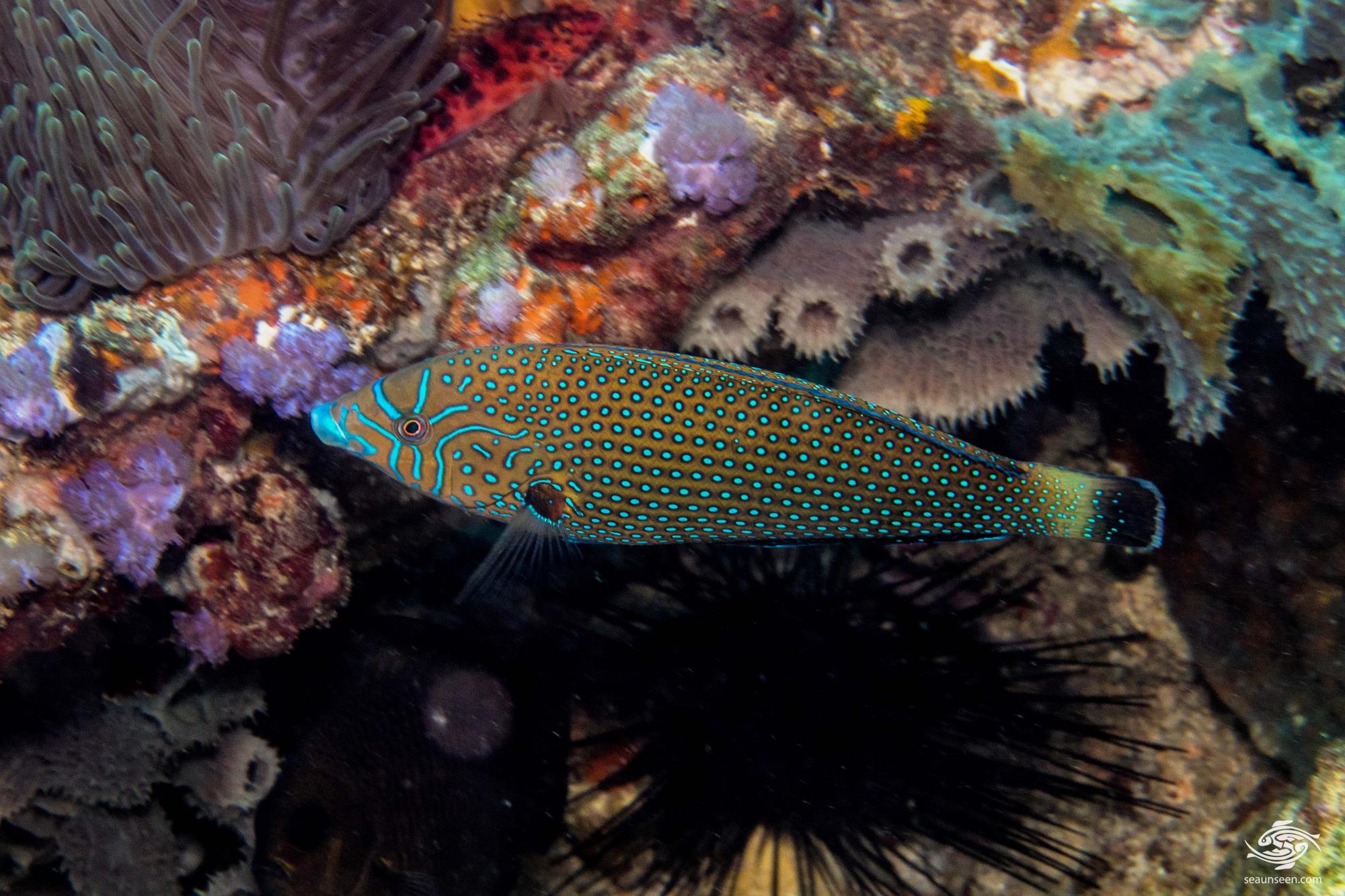 The Bluespotted wrasse feeds on small crustaceans and mollusks. They have specialized teeth for picking them off the rocks and coral and as with all wrasse, grinding plates further back from the mouth to crush their hard shelled prey. They sometimes feed on their own in groups of two to three fish but will often follow a shoal of goatfish and other wrasse species feeding across the reef. 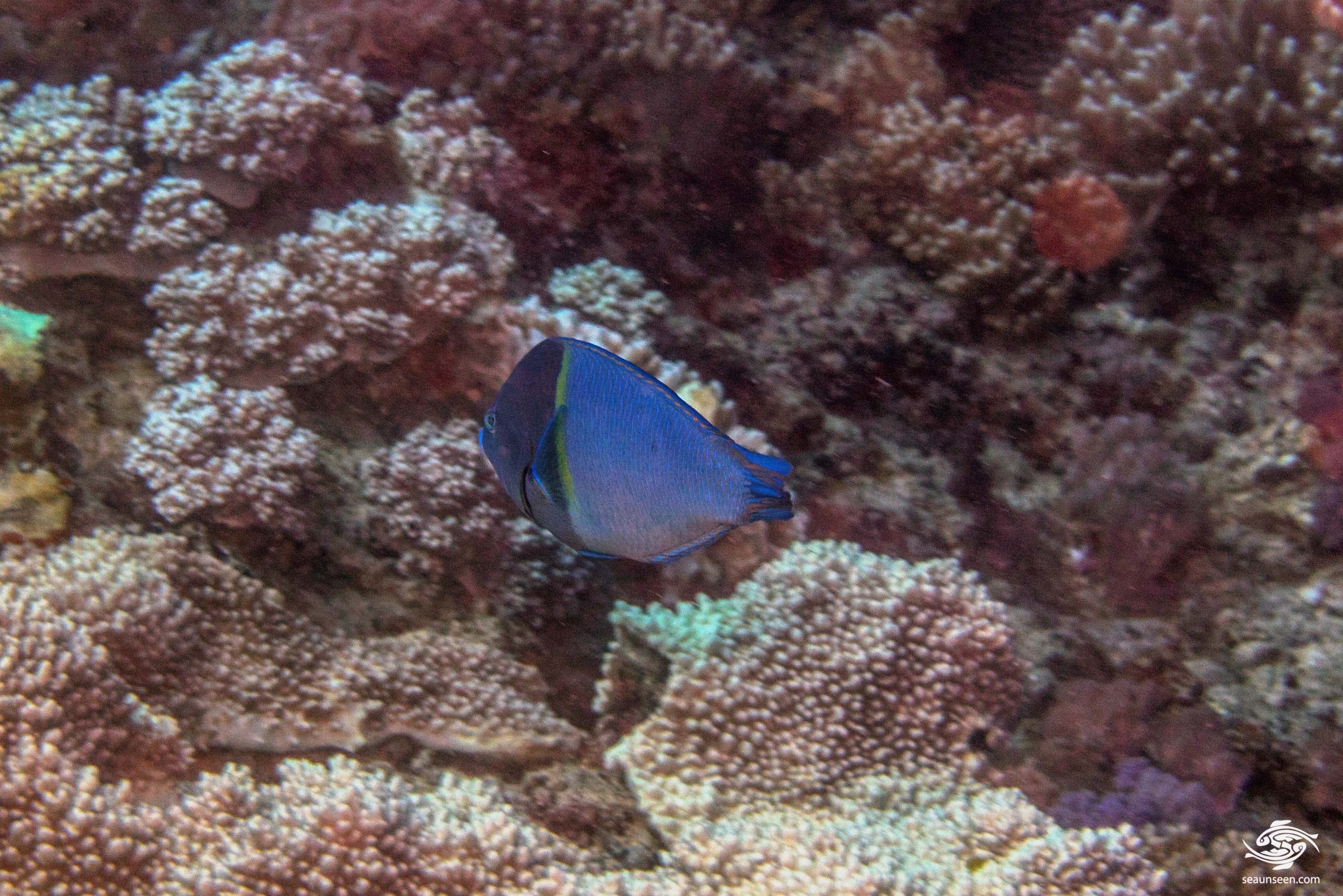 The males seem to retain large numbers of groups of females in their territories in Tanzania. Distinct pairing takes place. From the abundance of juveniles from December onwards to March, one assumes that the breeding starts in November/December.

The Bluespotted Wrasse are sometimes kept in aquariums but are not that well known in the trade. None of the Anampses species travel well and obtaining a specimen in good condition can be a challenge. This has probably led to their reputation of being difficult to keep.

A large well established tank with plenty of copepods and zooplankton would be preferable. They require plenty of swimming room and a thick base of sand to burrow into at night.  They will jump so the top should be secured. There is a very good article on keeping them here.