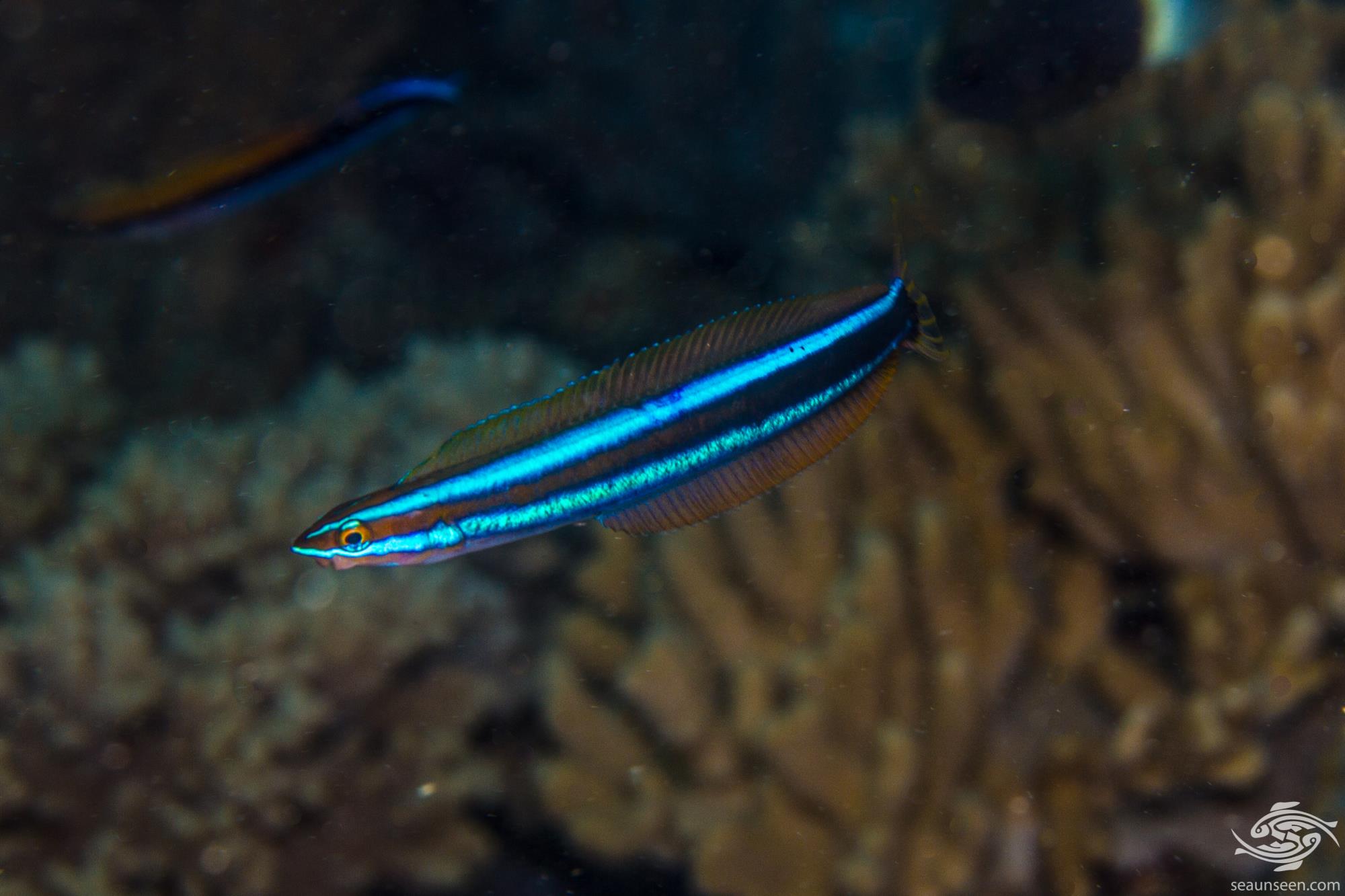 The Bluestriped fangblenny (Plagiotremus rhinorhynchos) is also known as the bluestriped blenny, bluestriped sabretooth blenny, blunt-nose blenny, cleaner mimic, tube-worm blenny and the two-stripe blenny. They are very interesting fish as they have several distinct colors that they are able to change between and are able to mimic different species of fish at different times using their color changing abilities. This makes it one of only two known species that are able to change color to mimic more than one species, the mimic octopus being the other. 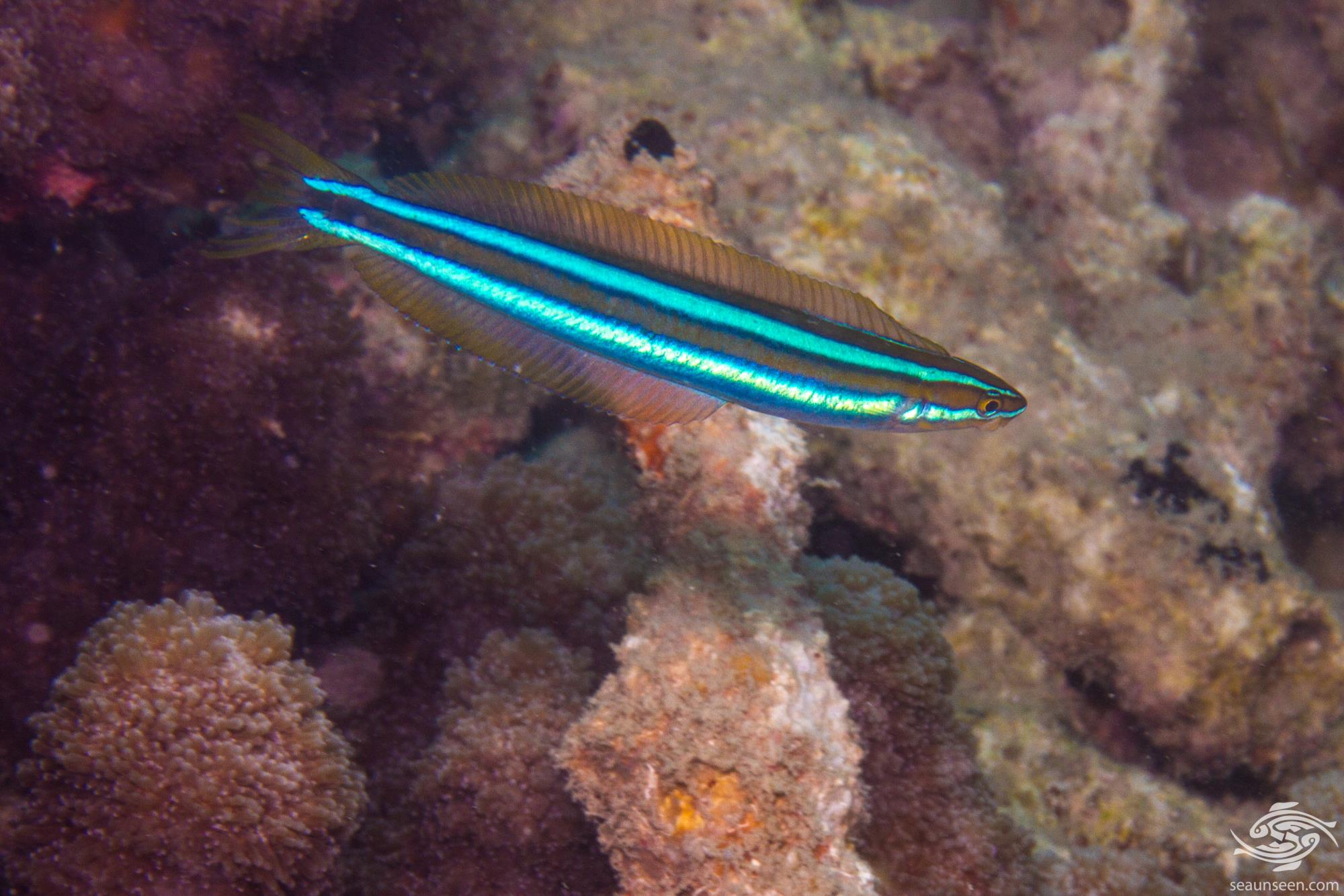 They obtain their name from the blue stripes on the body and the term Fangblenny refers to the two rather vicious looking teeth that they have in their lower jaw. These teeth are proportionally large and curve downwards and then up again, similar in shape to those of the now extinct Sabre toothed Tiger except that they are in the lower jaw on the blennies. These teeth are used to attack unsuspecting fish to bite small pieces off of them. 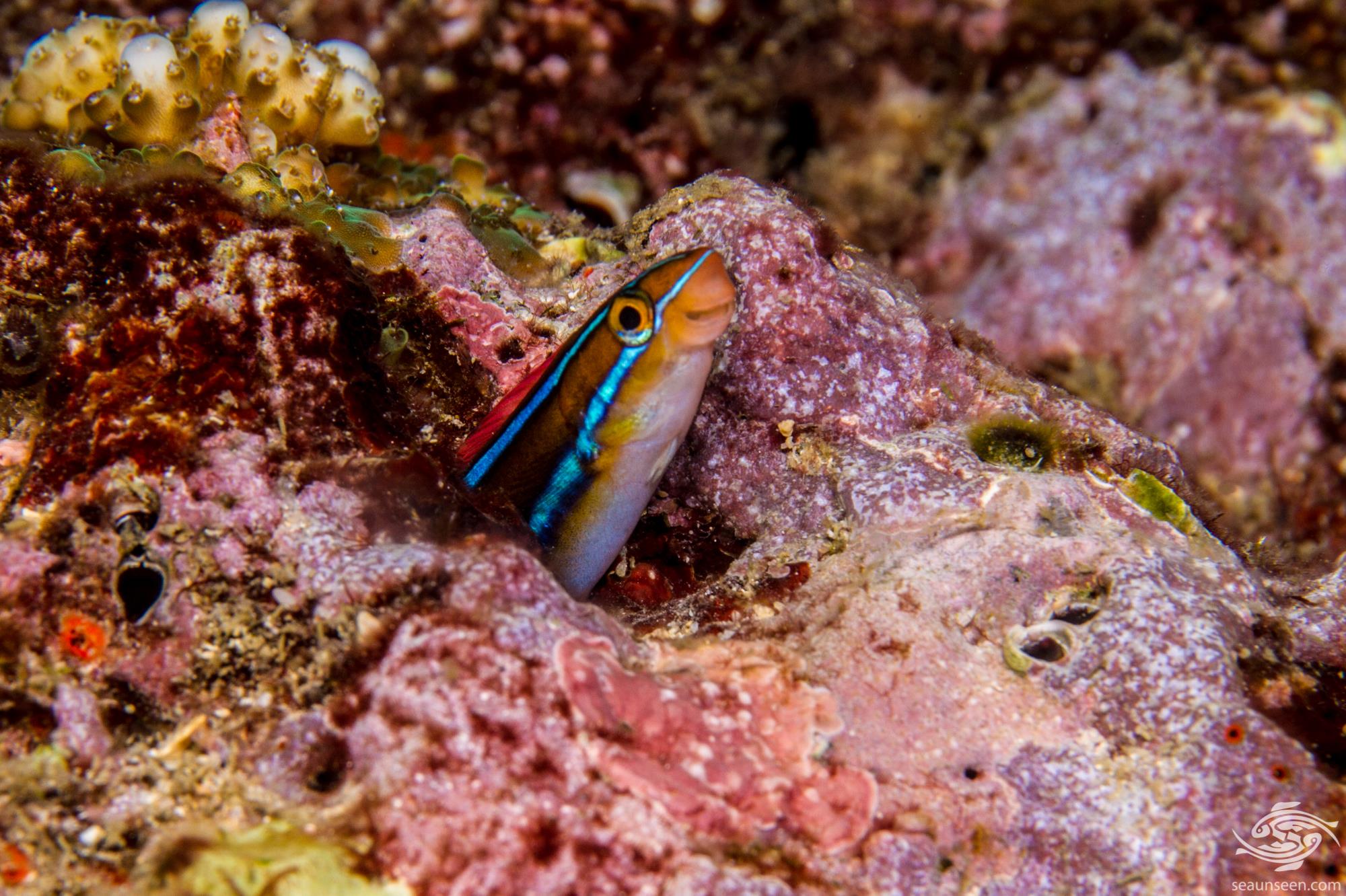 The body has two main color phases and is usually either a dark brown blackish color pictured above or a bright orange pictured below, but is capable of changing to several colors inbetween. Two bright light blue stripes run above and below the eye along the body. They are however capable of exhibiting at least five different colour patterns as set out in the paragraph below. 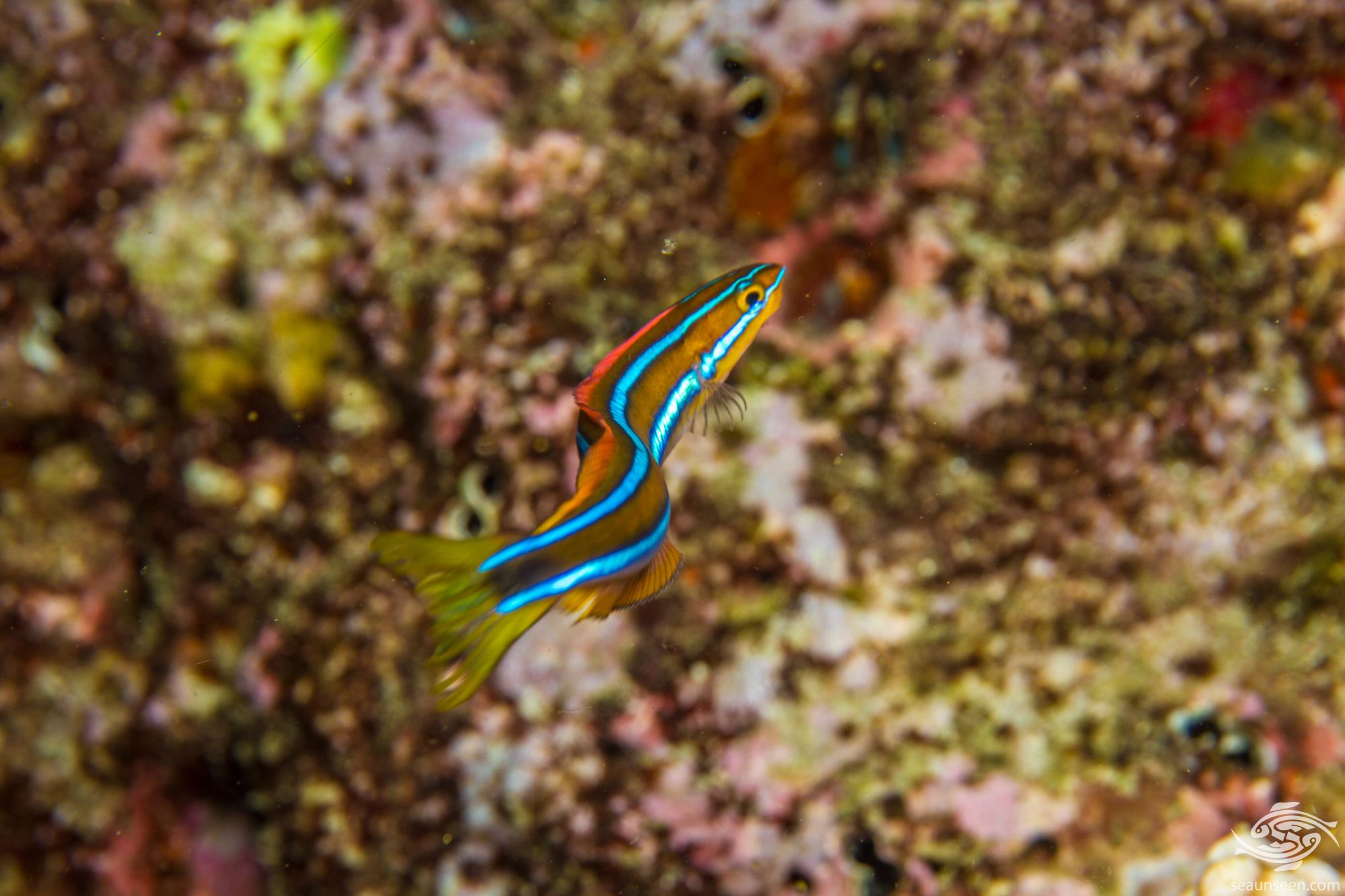 BLUESTRIPED FANGBLENNY IN THE WILD 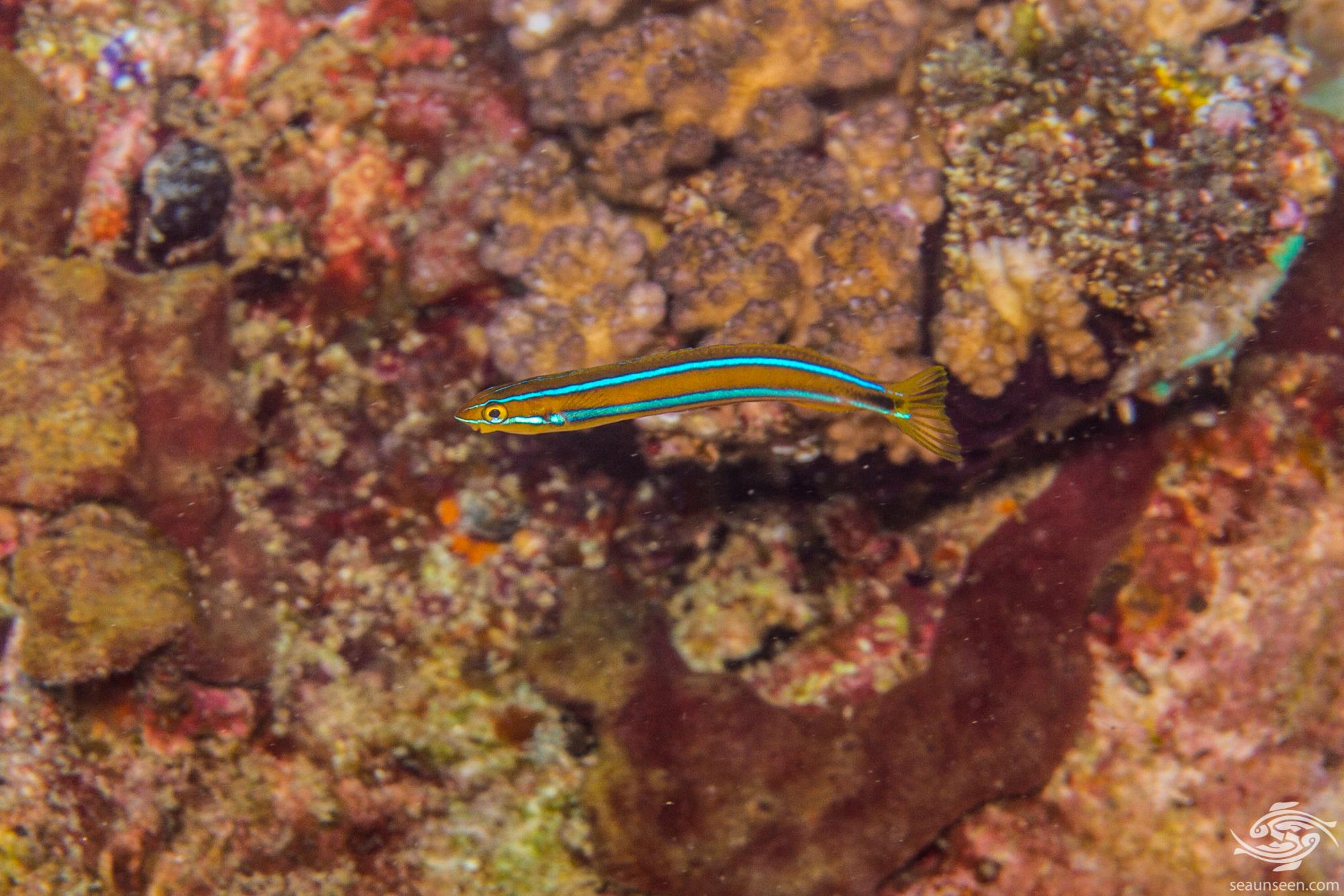 The association with all the fish above bar the Blue Streak Cleaner Wrasse,  was to hide in groups of the model fish to launch strikes against other fish. “Their repertoire of disguises appears to prevent, or reduce detection by potential victims,” Dr Cheney one of the researchers said. “They may also escape from predators by hiding in a large shoal.”

In Tanzanian waters the Bluestriped Fangblenny is usually seen around cleaning stations run by the Blue Streak Cleaner Wrasse in its darkened colour form. Only when away from the cleaning stations have we seen them in orange colouration. 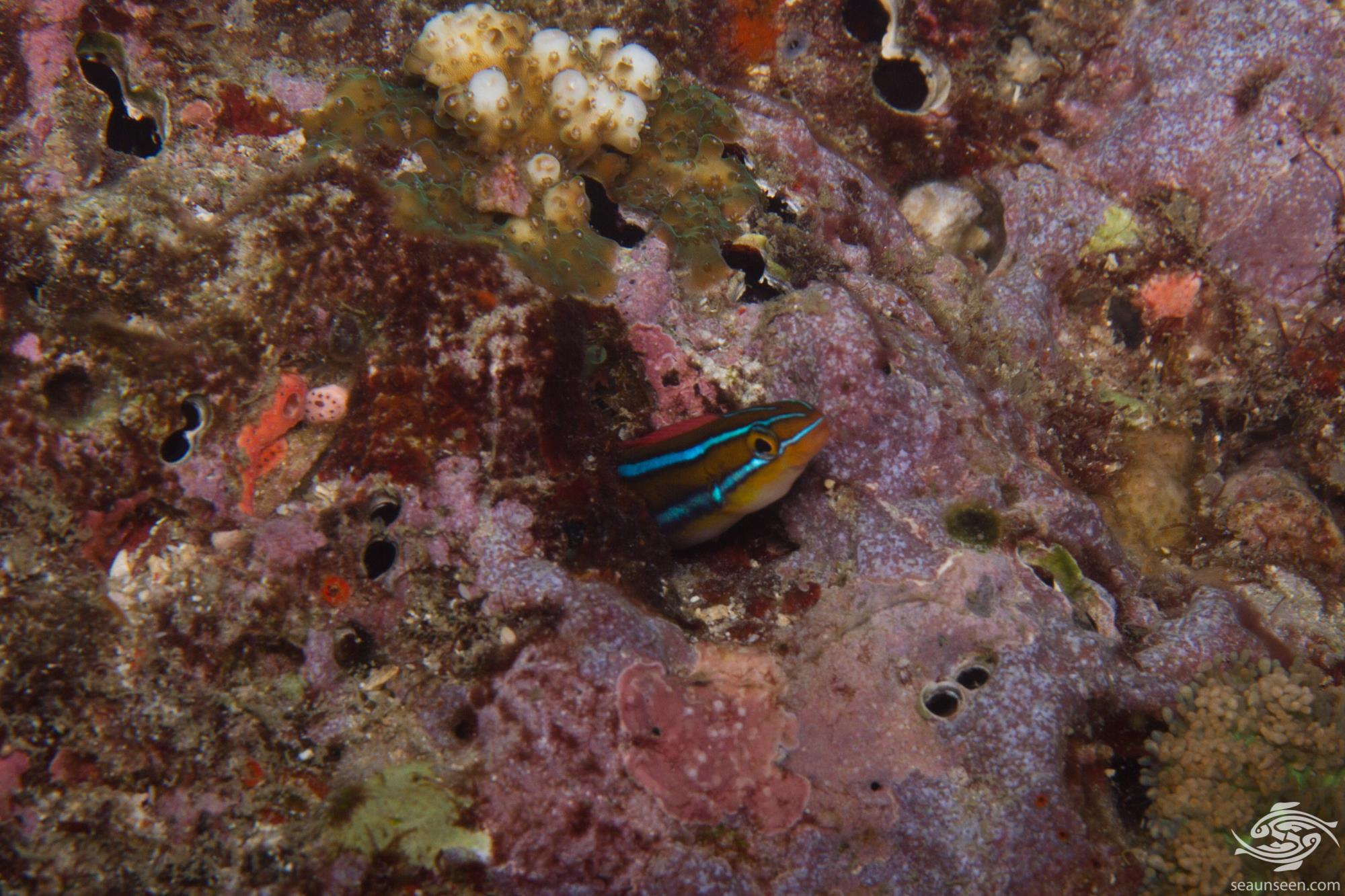 The Bluestriped Fangblenny occurs throughout the Indo-Pacific, from the East African Coast across to Southern Japan and down to Lord Howe Island to the East of Australis. They are found mainly on coral or rocky reefs and are often seen hiding in unused tubeworm holes as seen below. 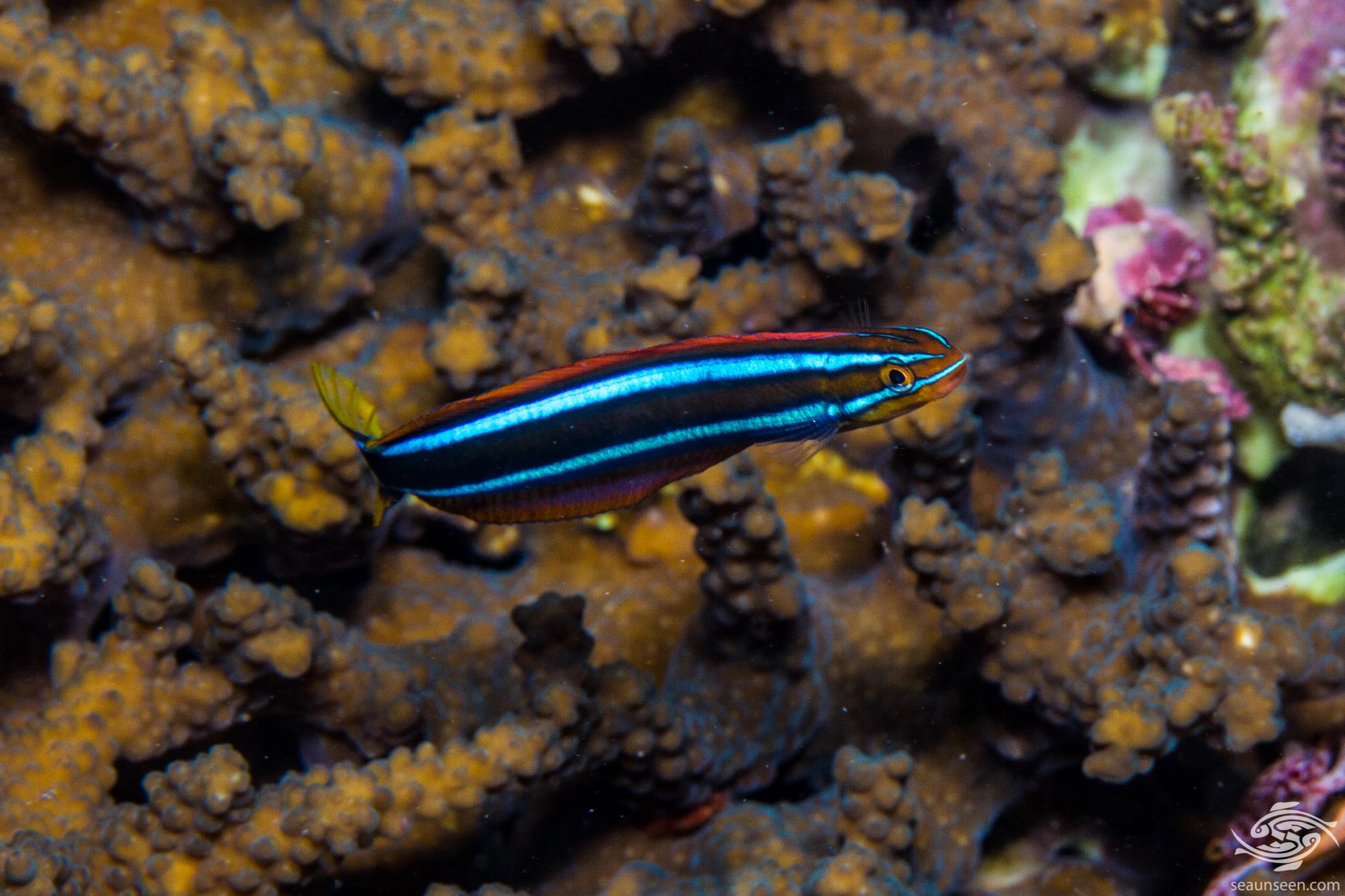 Bluestriped Fangblenny feed exclusively on mucus, scales and fins bitten off other fish. 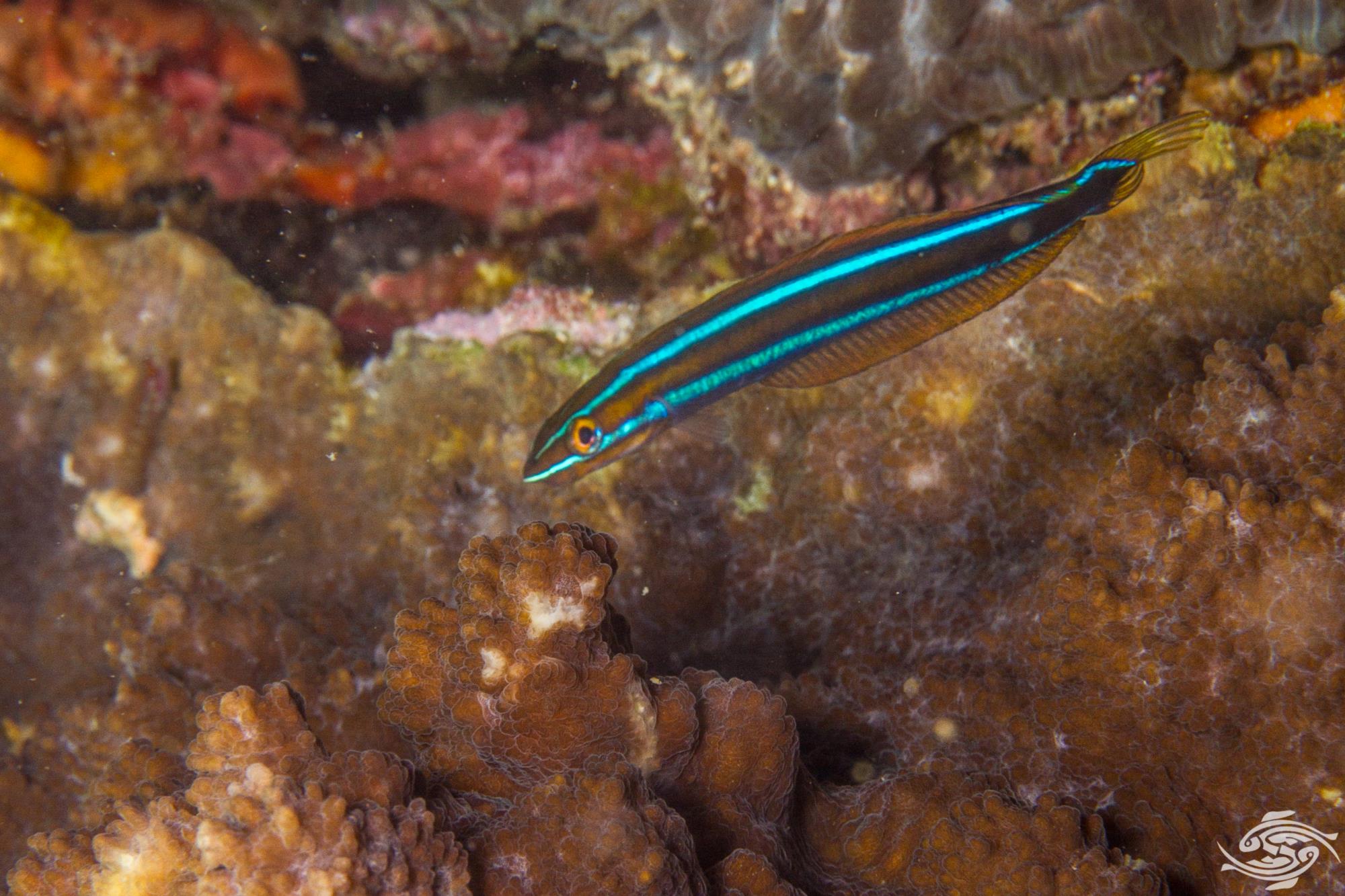 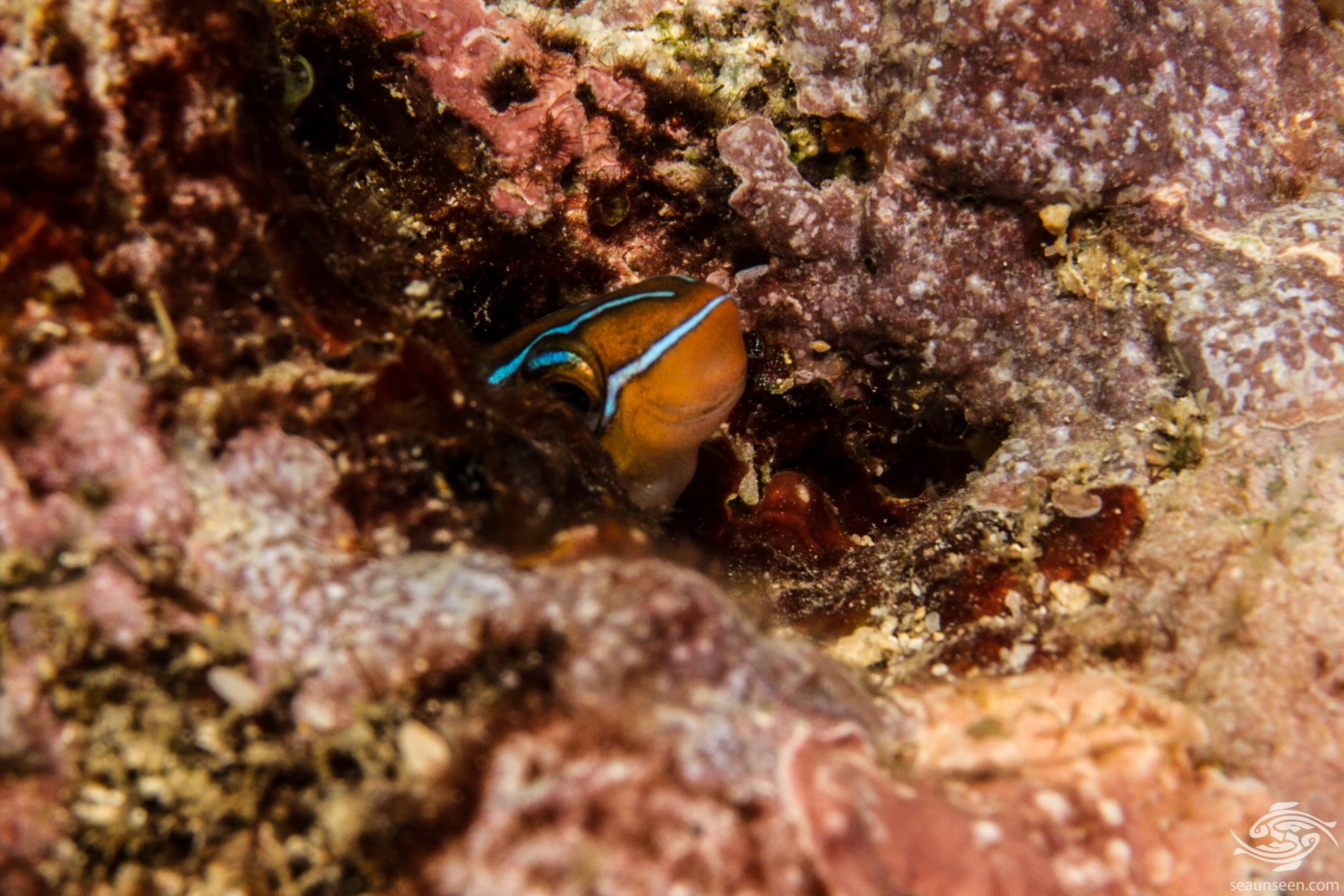 Bluestriped Fangblenny are not commonly kept in aquariums due to their diet and the harm that they would undoubtedly do to their tank mates. Injuries to fish in a tank run a greater risk of infection and this is not a fish many aquarists would want in their tank. 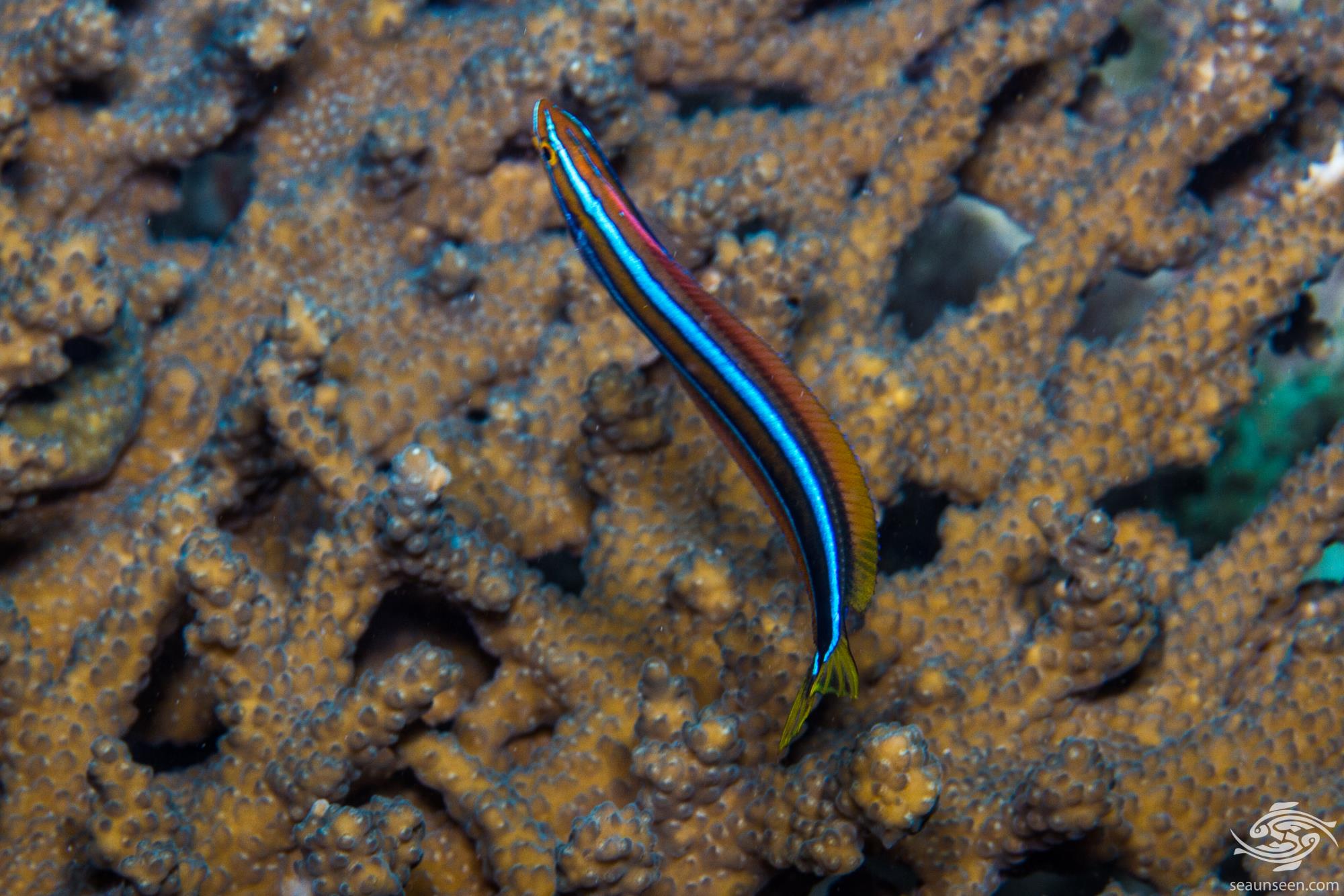 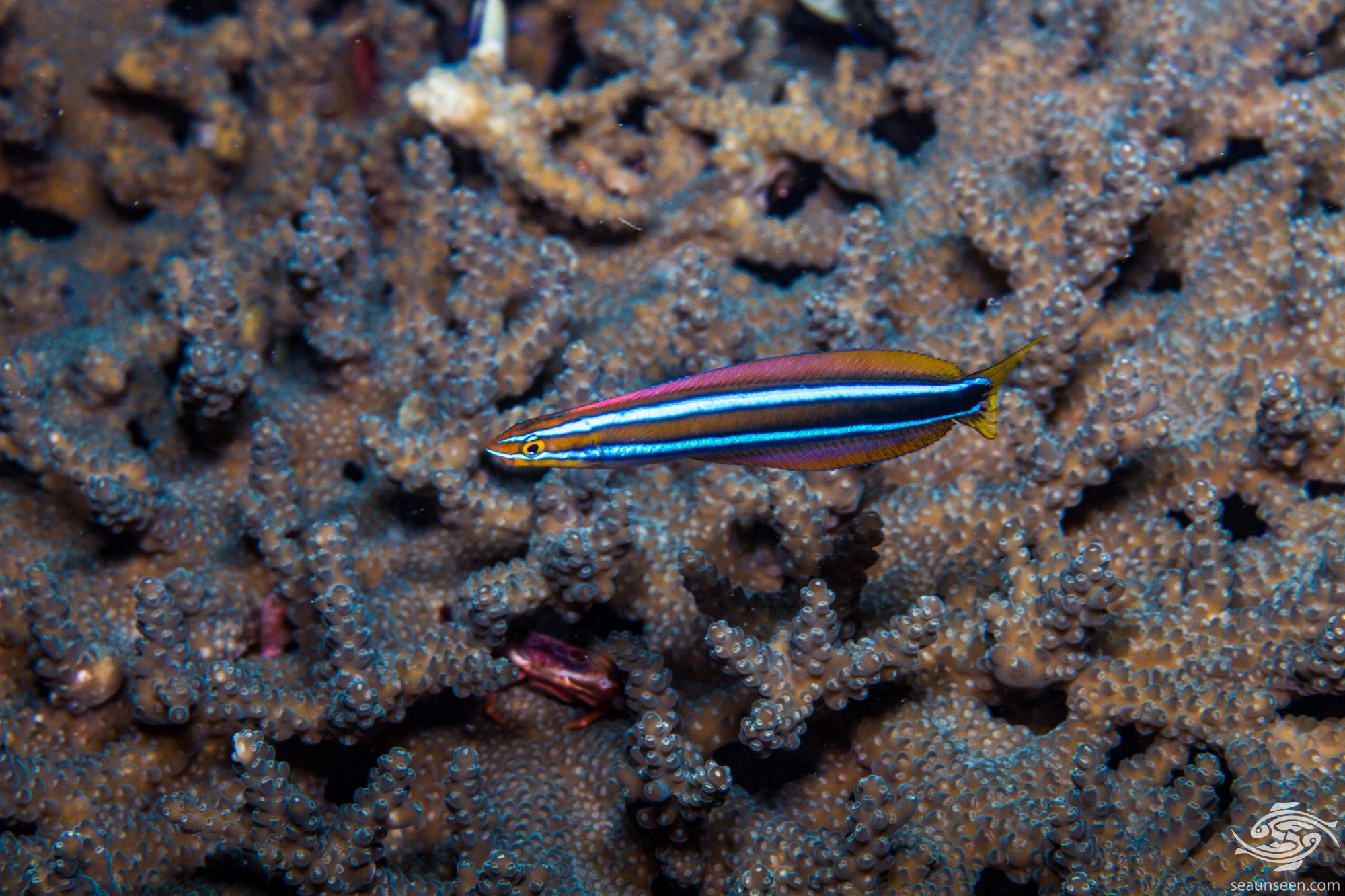