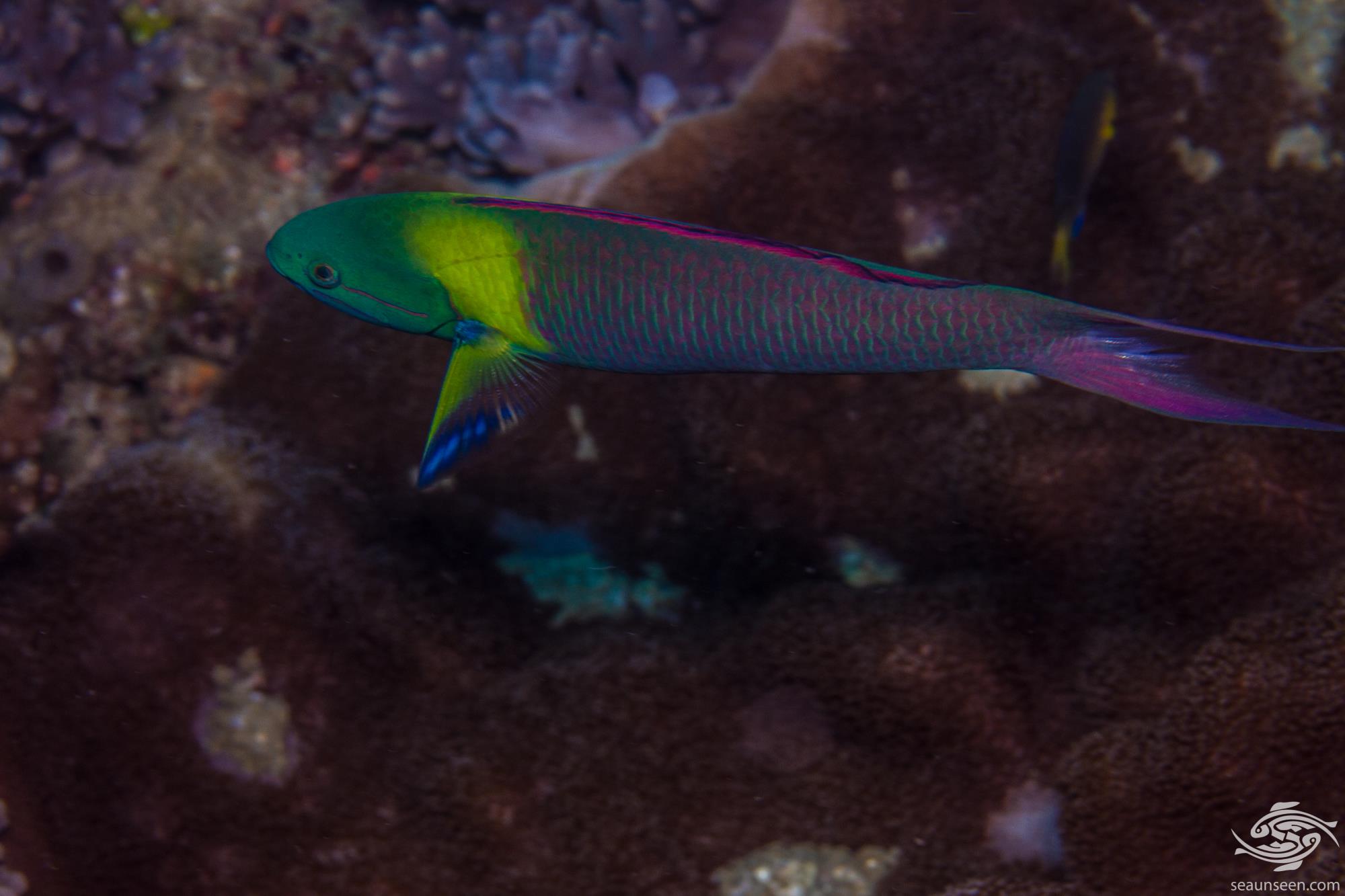 The Bluntheaded Wrasse (Thalassoma amblycephalum) is also known as the Blueheaded wrasse.  They tend to favor the tops of semi protected shallow coral rich reefs.  They are extremely active fish and cruise the reef at high speed. Given their preferred diet of planktonic crustaceans, they have a proportionally small mouth compared to other members of the Thalassoma genus

As with many wrasses the colouration changes from the adults to the juveniles. The  juveniles have a dark upper body with a white lower body.  There is a lighter line across the upper body from head to tail and the upper and lower edges of the caudal fin area are orange. As they mature into the female initial stage so alternating green and brown vertical lines develop on the upper body and the head turns green with a light orange facial line extending backwards from the eye.  The orange on the upper and lower caudal areas remains as with the juveniles.

In the terminal or male phase, the brown lines turn to purple and the dorsal and caudal fin goes purple. The head goes green/blue and the area behind the eye goes yellow making a solid thick horizontal bar. As they mature so a black ringed blue oblique line develops mid body.  The larger males grow up to 15 cm but are usually slightly smaller. Females are usually in the 8 to 11 cm range. 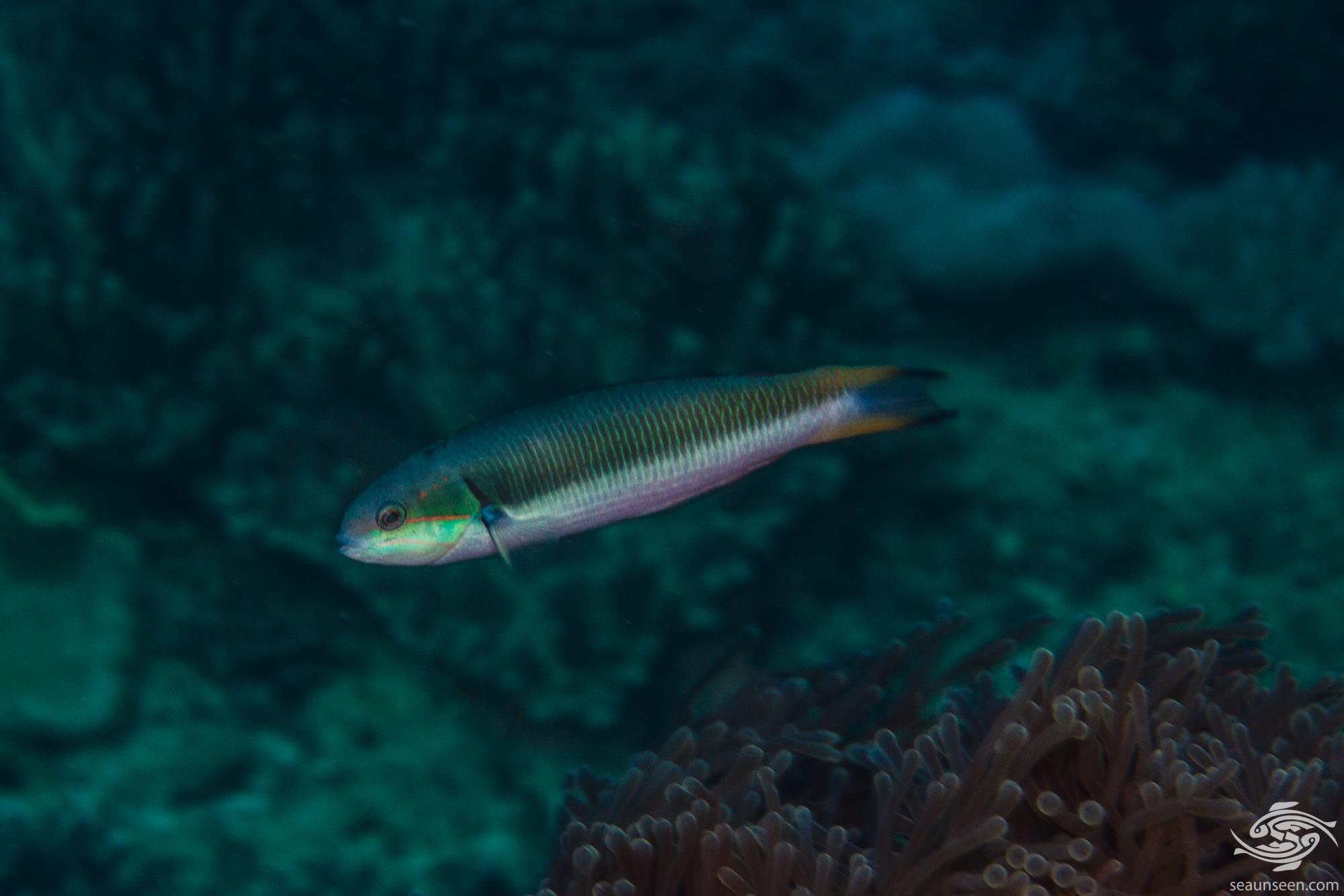 BLUNTHEADED WRASSE IN THE WILD

The Bluntheaded wrasse are very active fish and cruise the reef at high speed.  The juveniles are usually seen in large groups, often hiding in urchin spines or branched corals.  The females are normally in small groups of four to five and may sometimes have groups of juveniles in the vicinity.  The males seem to have several harems of four to five females. They swim between the harems and are aggressive to other males. 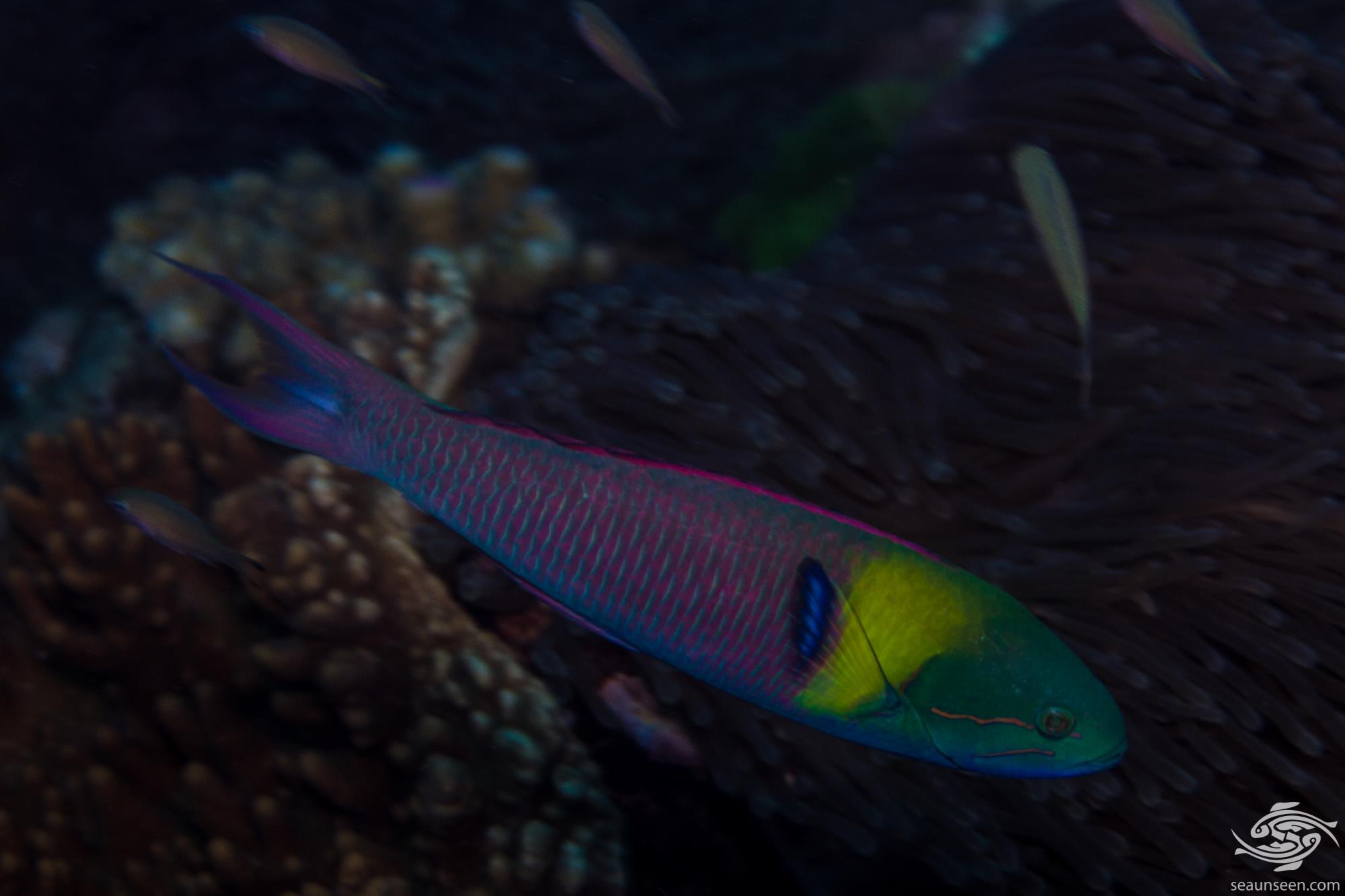 The Bluntheaded Wrasse, is found across the Indian Ocean from Somalia down to South Africa and across into the Pacific to the Line and Marquesas Islands. They favor shallower waters and are almost never seen deeper than 15 meters. 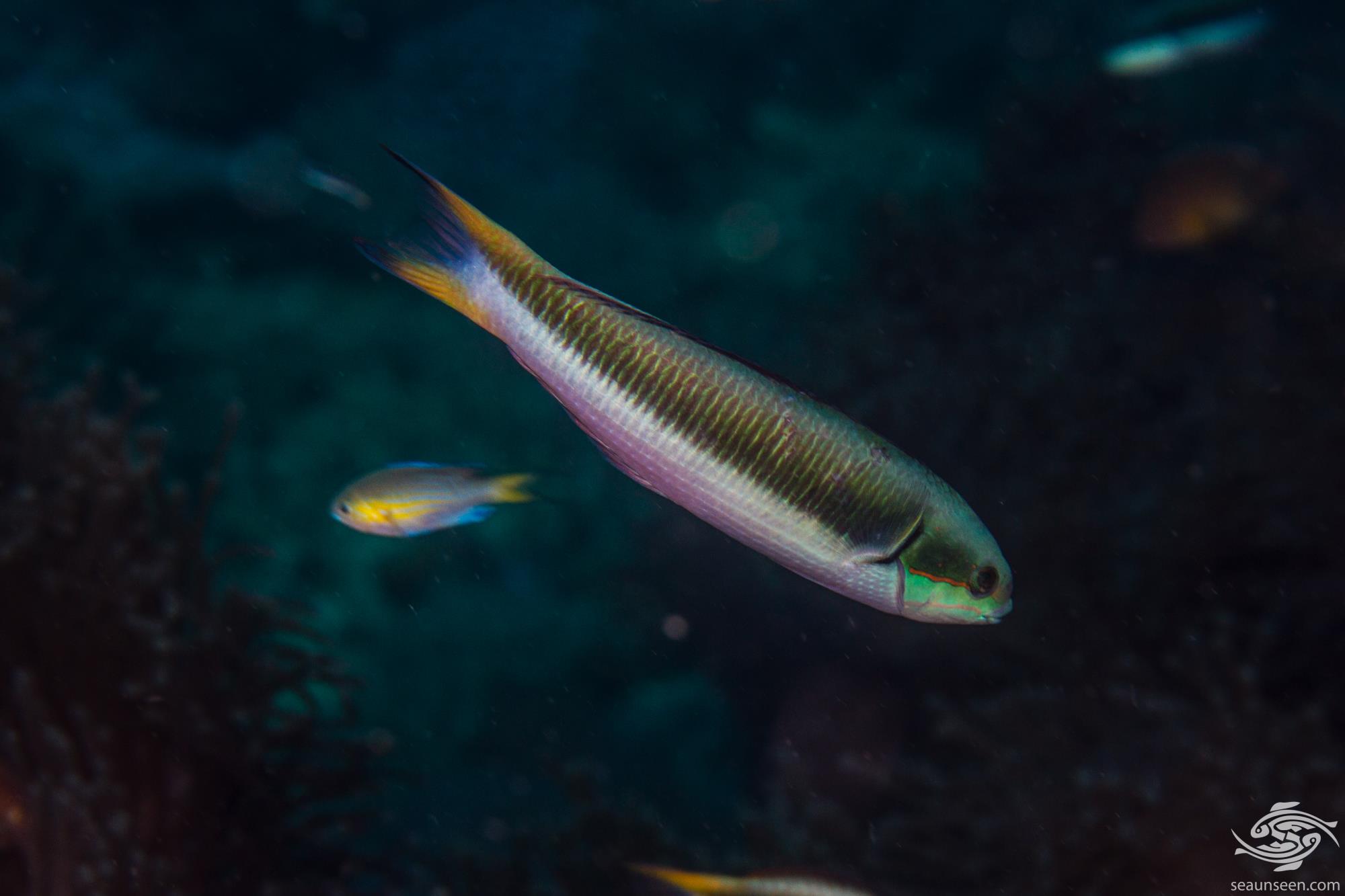 The Bluntheaded Wrasse feed  mainly on planktonic crustacean larvae and actively swim the reef picking out their prey from the water table. 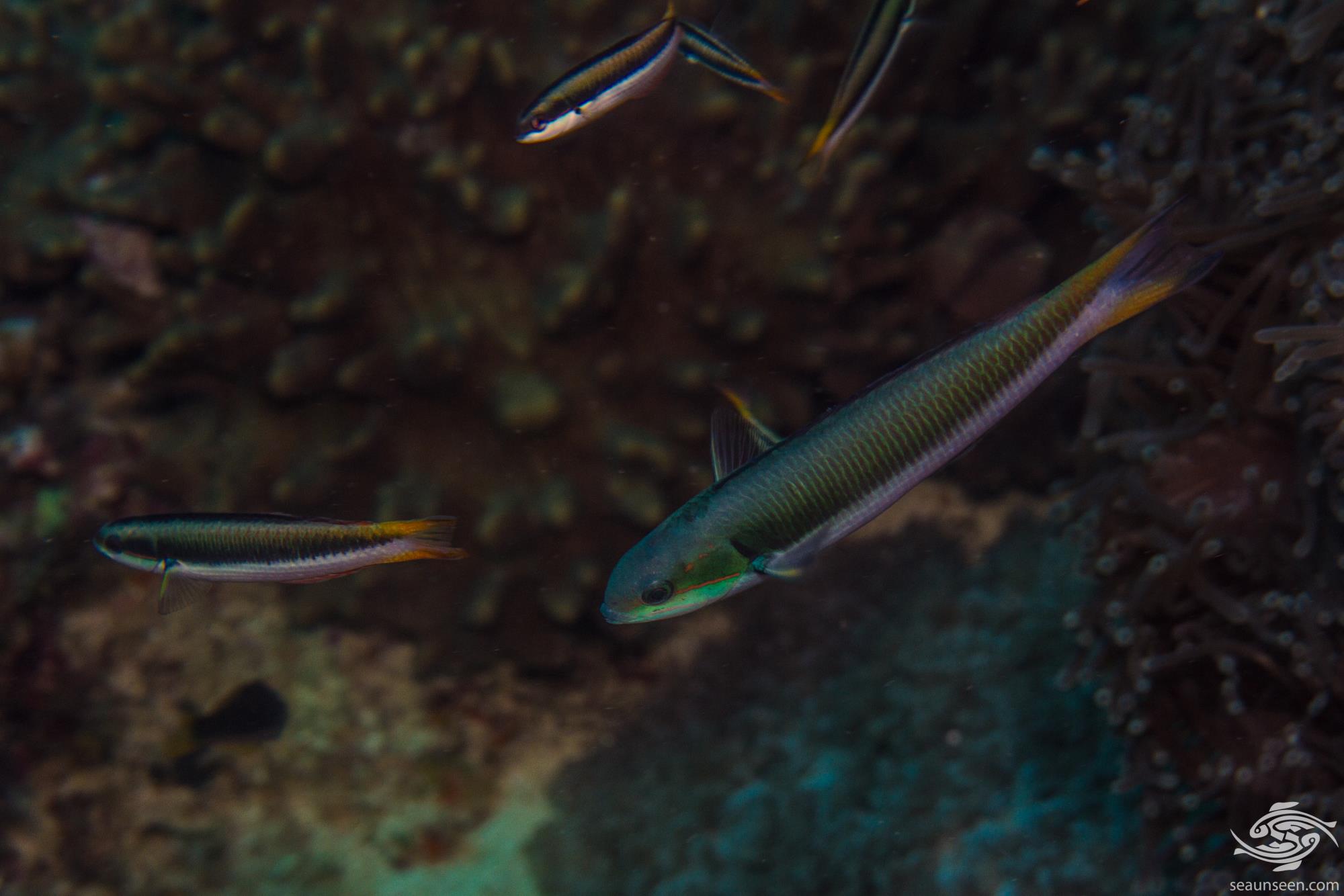 The Bluntheaded Wrasse is a Protogynous hermaphrodite, they first develop into females. Some specimens based on social cues transform into males. They are Oviparous, with the dominant male running a harem or at times several harems of females. Little is known of their breeding habits but occasionally a dominant male will be seen pursuing a female. As with everything these fish seem to do , the pursuing takes place at high speed with the male swimming alongside the female. 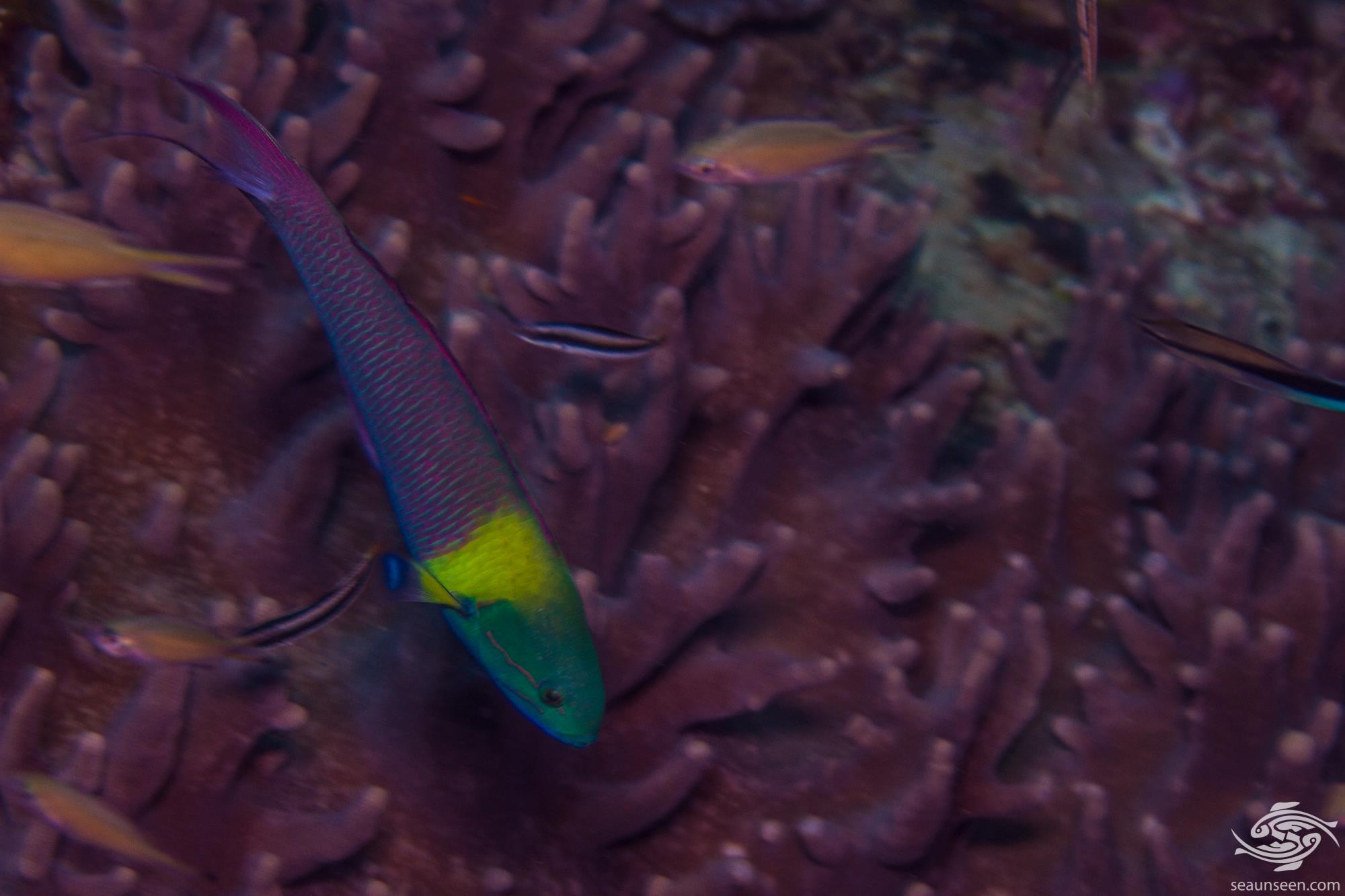 Bluntheaded Wrasse are kept in aquariums but being aggressive may become territorial towards similar sized fish and because of this are not probably not commonly kept. They require good hiding places and plenty of water to swim in. A larger tank is therefore a prerequisite. They also need thick sand to burrow into. These fish will almost certainly jump out a tank if given the chance.  Their diet in the wild is planktonic and they can be weaned onto vitamin enriched brine shrimp. 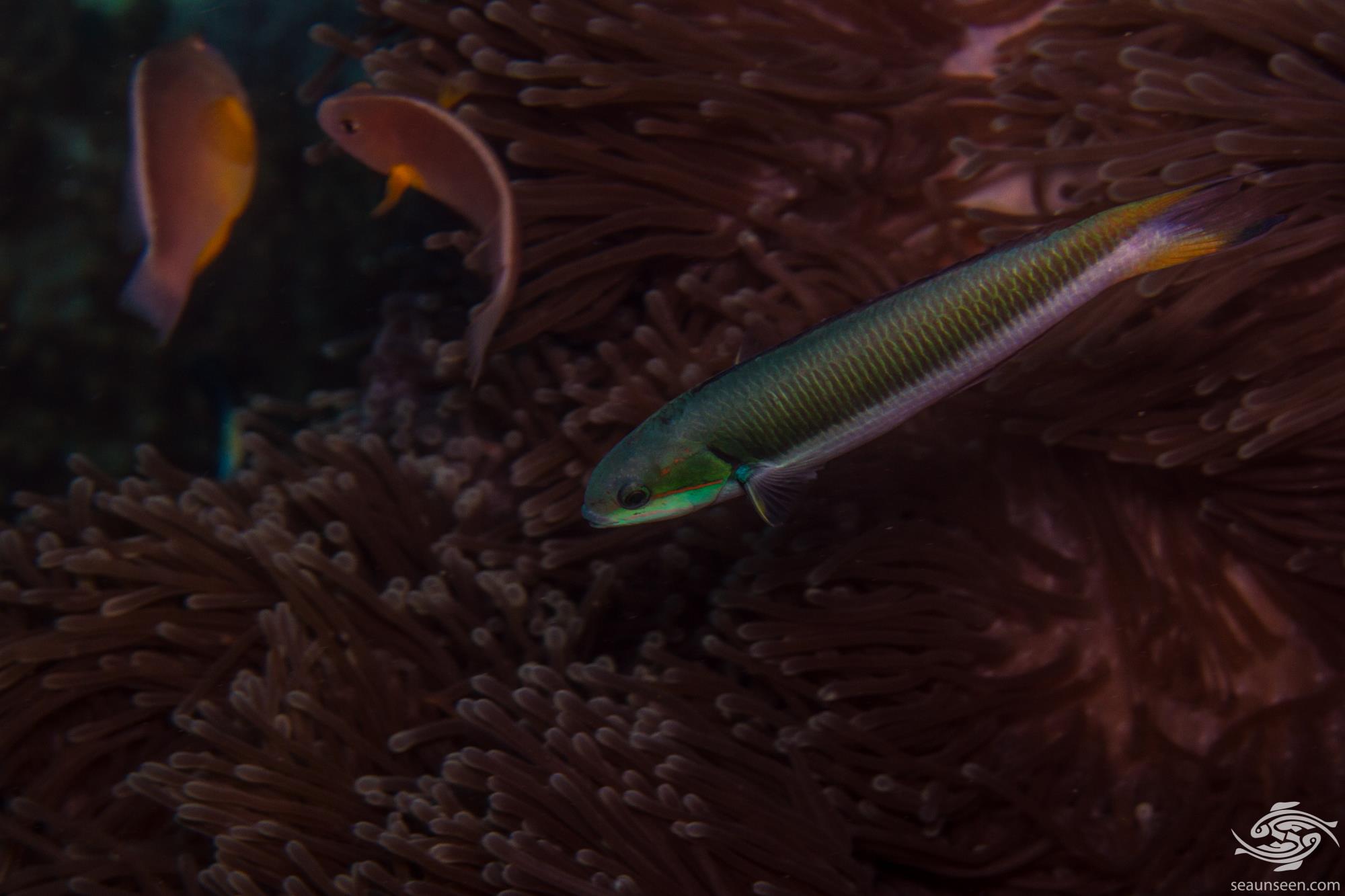