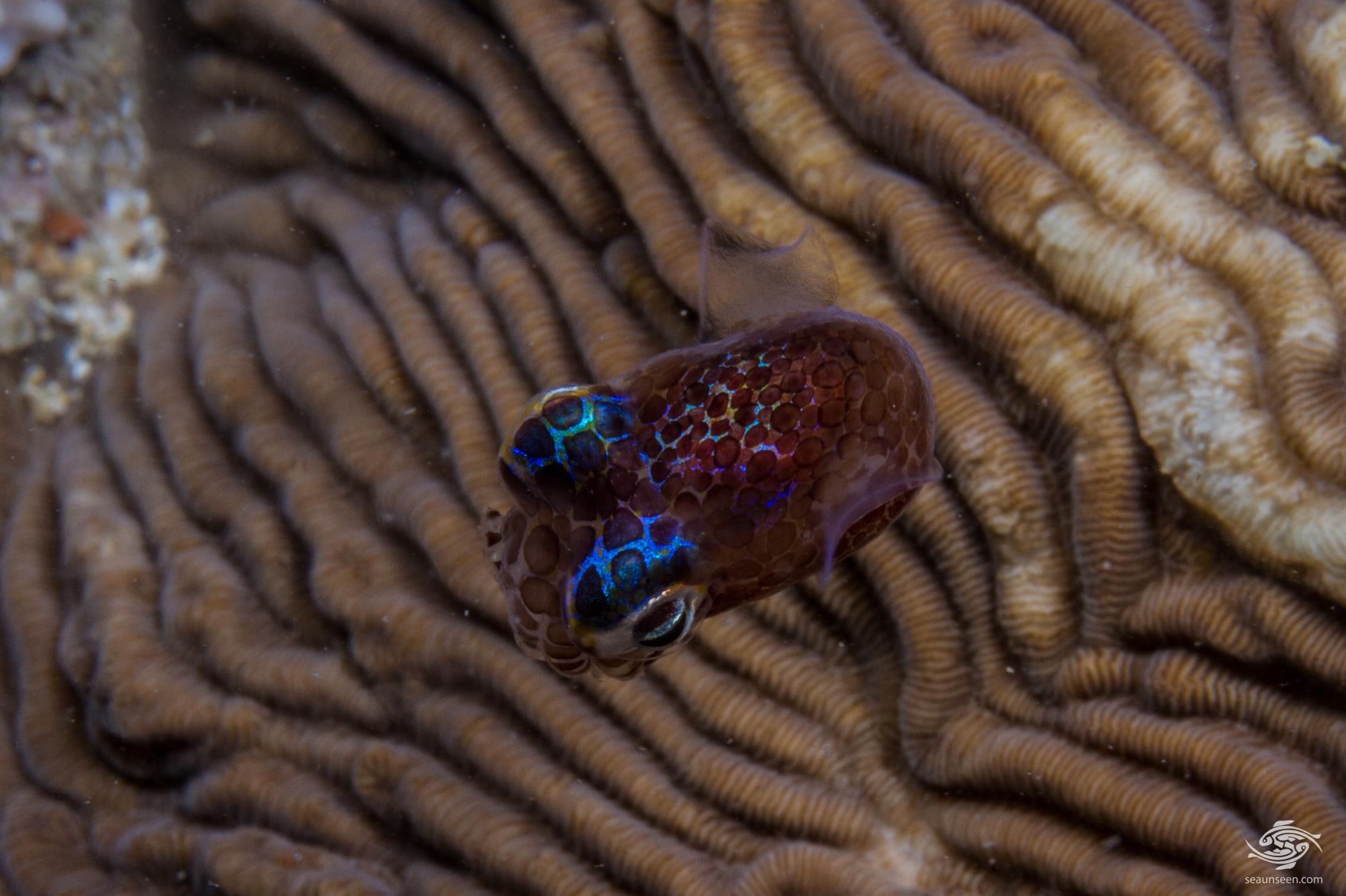 Bobtail squid are also known as Dumpling Squid. They are exceptionally cute looking little cephalopods and are fascinating to watch.  They are in the order Sepiolida and are closely related to cuttlefish although they have no cuttlebone.

The specimens in the images were photographed at night  on the Tanzanian coast off Dar es Salaam.  To our knowledge they have not been recorded in East Africa before and at least superficially resemble the Hummingbird Bobtail squid or Berry’s Bobtail squid (Euprymna berryi) and the Mimika bobtail squid (Euprymna morsei) which are reportedly very difficult to distinguish. However both of these species are only known from the central Pacific. As a minimum they at least appear to be in the Euprymna family from their appearance but this could prove incorrect. 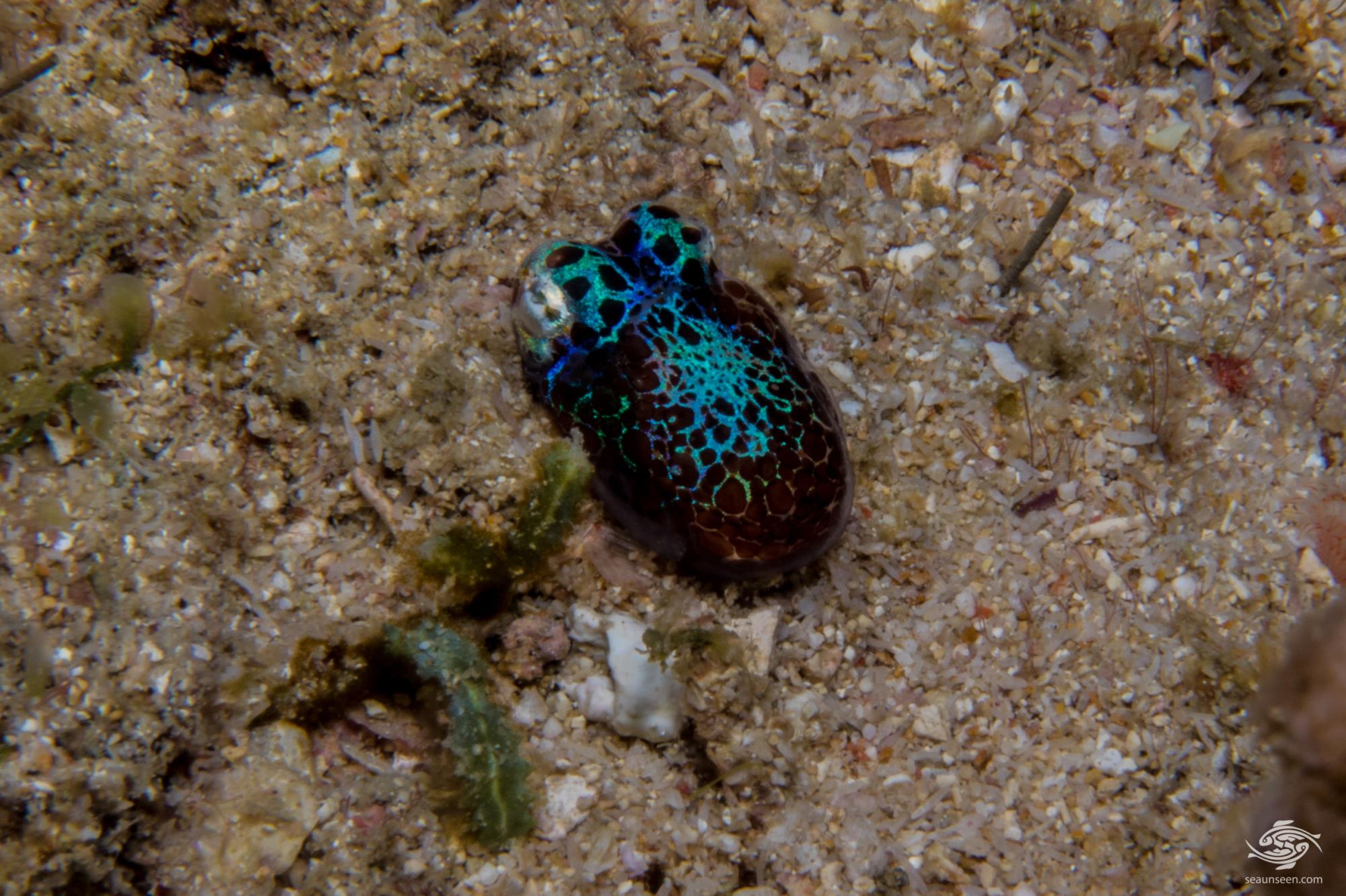 All Bobtail squid are all small and range in size from 1 cm to 8cm in length. The specimens in the images are approximately 2.5 cm in length. As can be seen the body is a light translucent brown color with circular darker brown marks covering the entire body.

They have eight arms with suckers on them and two tentacles which are used for grabbing prey. These contain a large number of tentacles concentrated on the ends to hold the prey. The eye is proportionally large, giving them very good night vision. 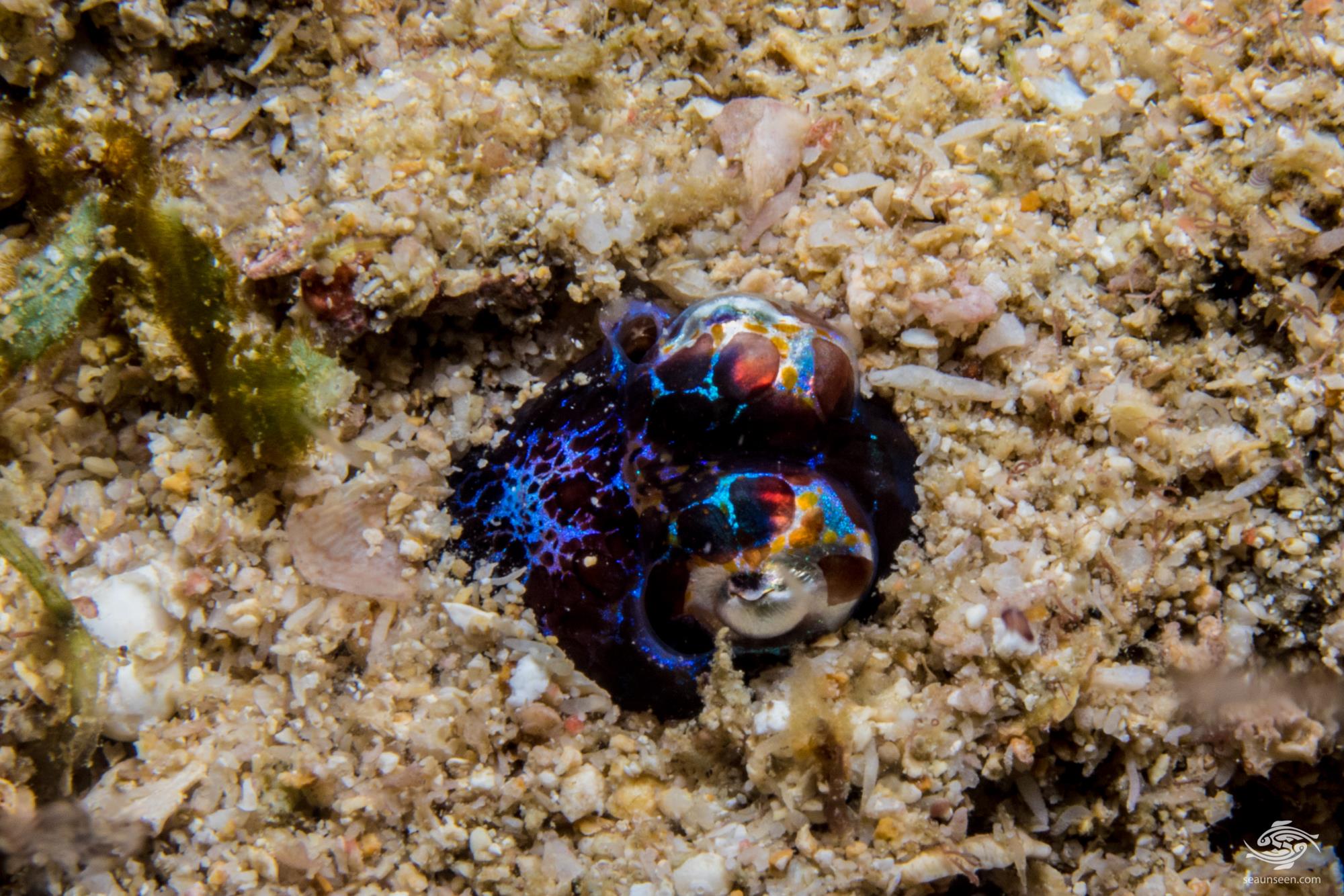 Inside the mantle are two bean shaped organs known as visceral photophores which give off light. Using a technique known as counter illumination the organs provide camouflage for the Bobtail squid by matching the intensity of the starlight and moonlight from above and emit the same amount of light out the bottom of the mantle. The light is produced by a bacteria, Aliivibrio fischeri and helps to prevent them from being silhouetted against the surface and ultimately provides protection for both the squid and the bacteria which produce the light. 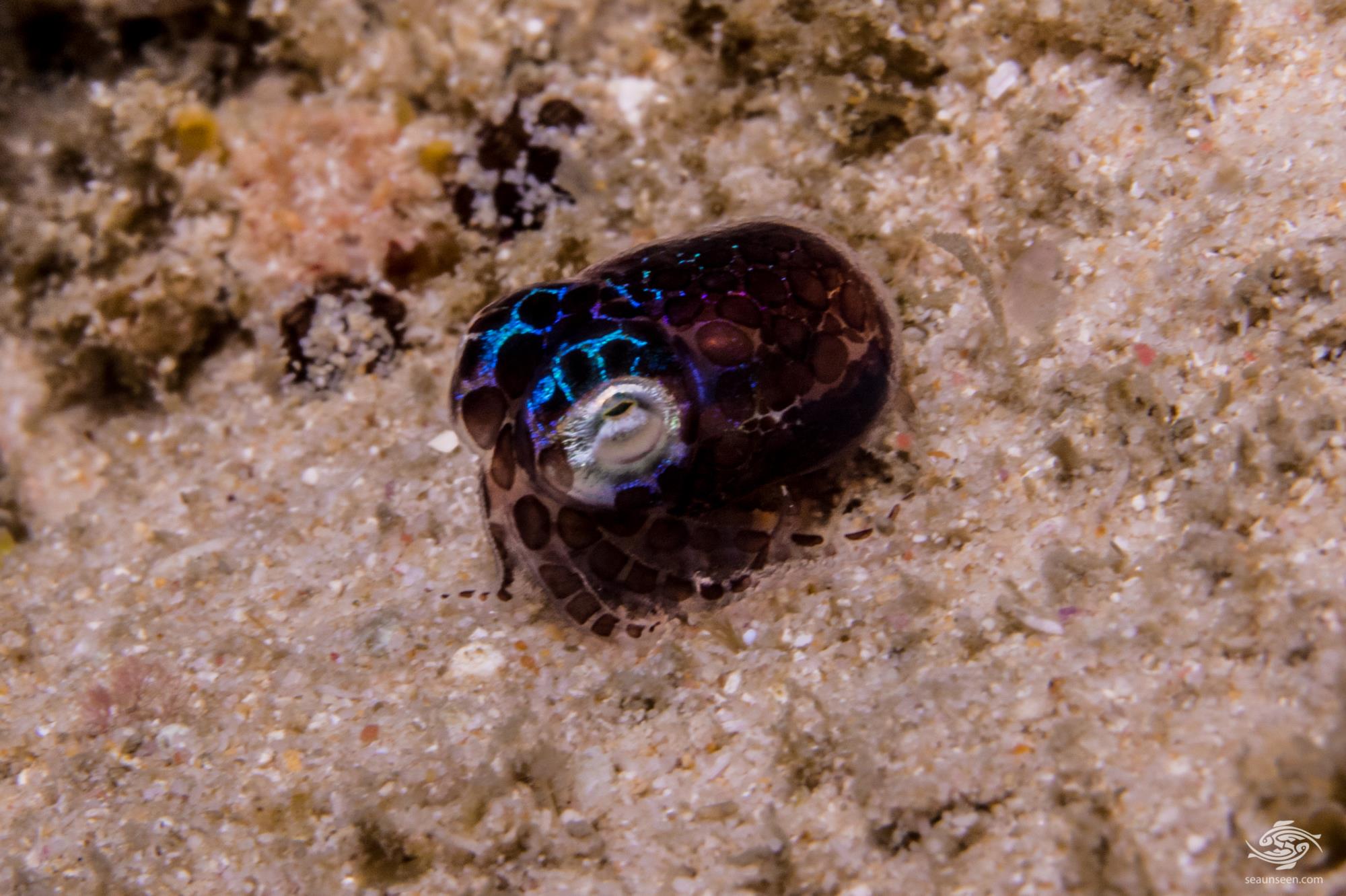 BOBTAIL SQUID IN THE WILD

We have only observed this particular species of Bobtail squid on two reefs off Dar es Salaam in Tanzania, namely Octopus top Reef and Kankadya Reef.  Both reefs are similar being shallow unprotected seaward reefs between 10 to 16 meters in depth with mixed coral and rubble interspersed with fine sand.

The specimens have all either been observed swimming just above the substrate, roughly 10 cm from the bottom and appear to be hunting.  On having light put on them they generally head for the sand and dig themselves into the sand. Only on two occasions have we seen them go under an overhang to hide and both these overhangs had sand under them. 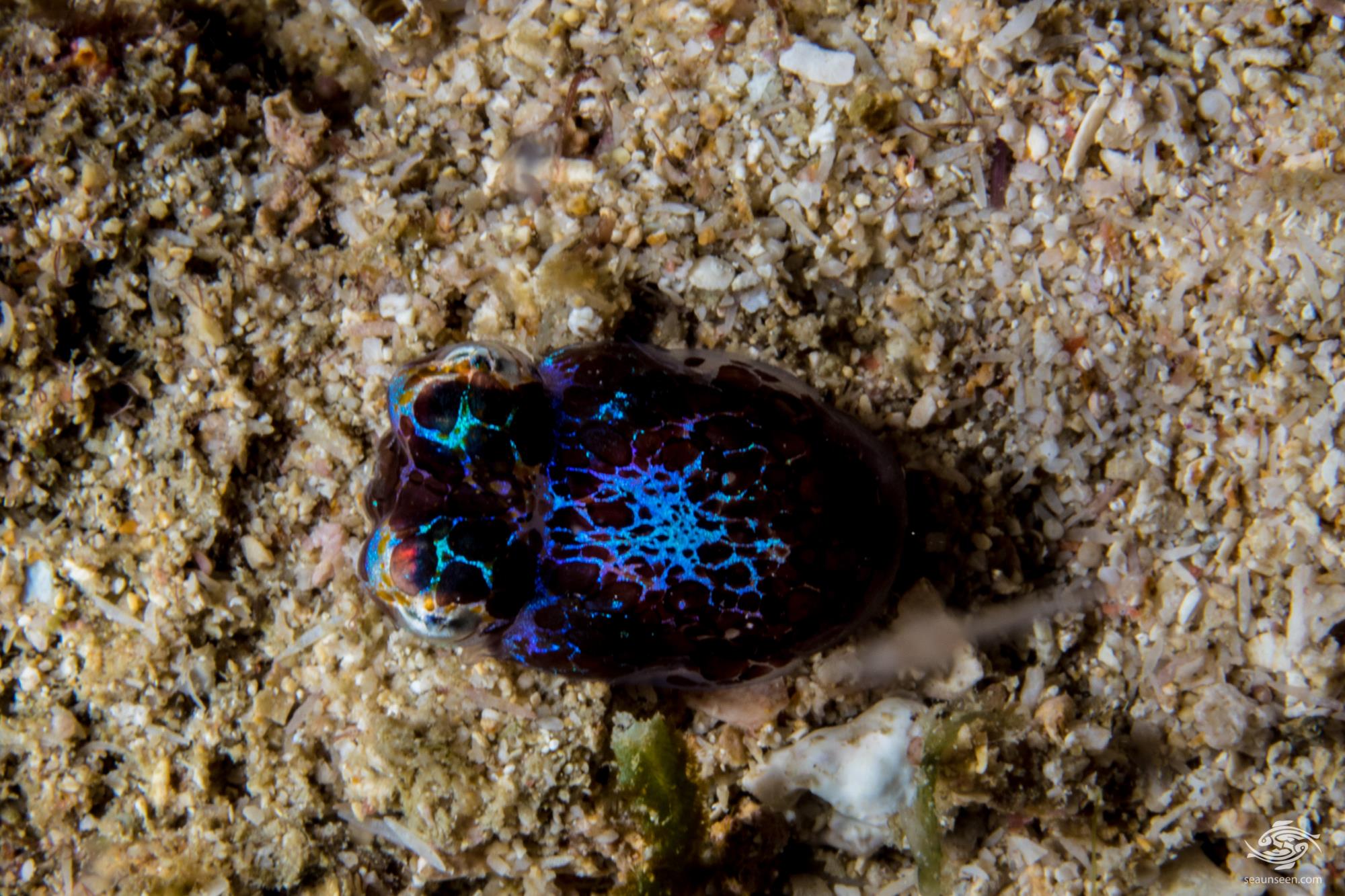 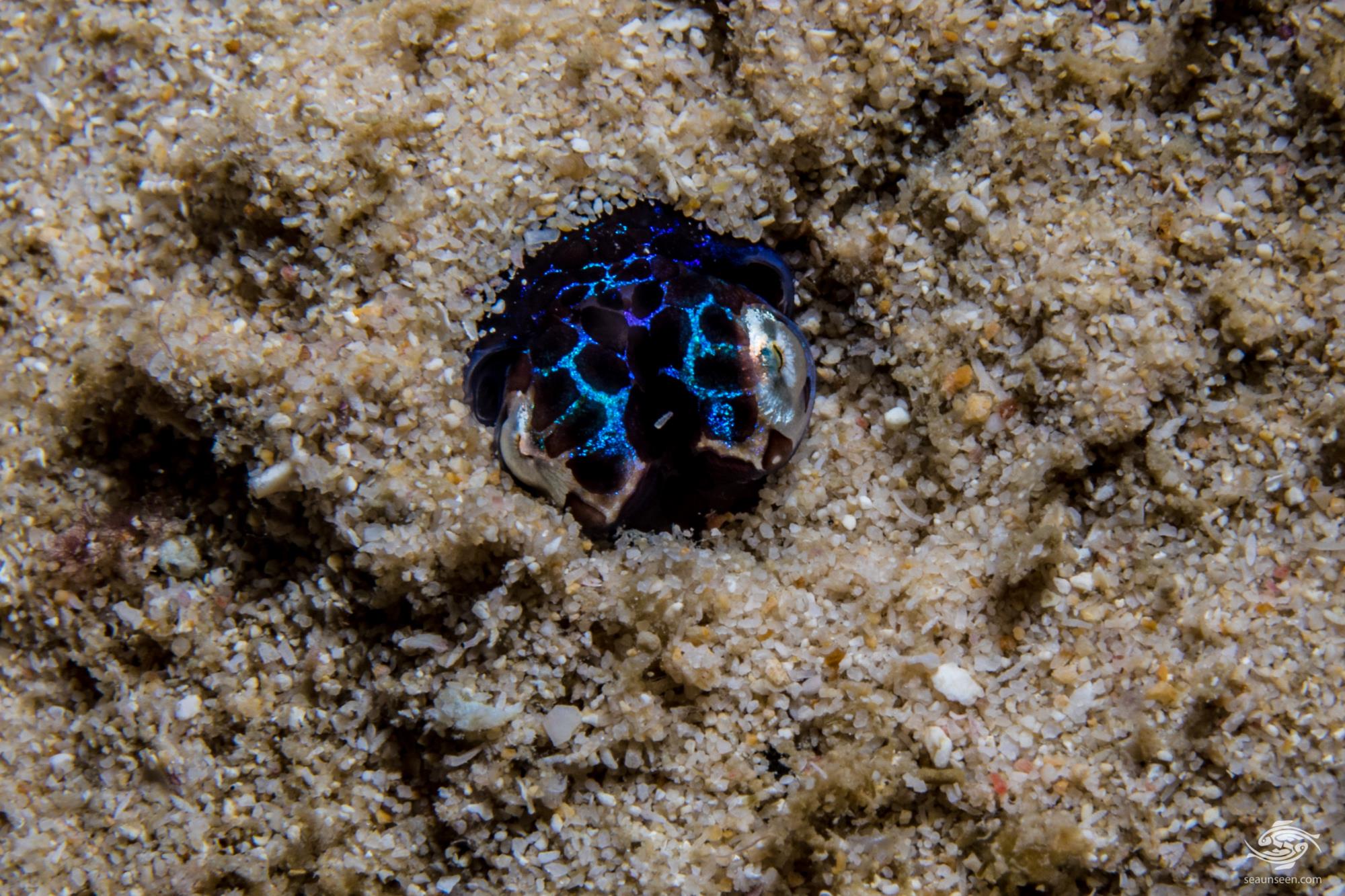 This specimen below sat down on some coral but quickly moved onto the sand to dig themselves in. 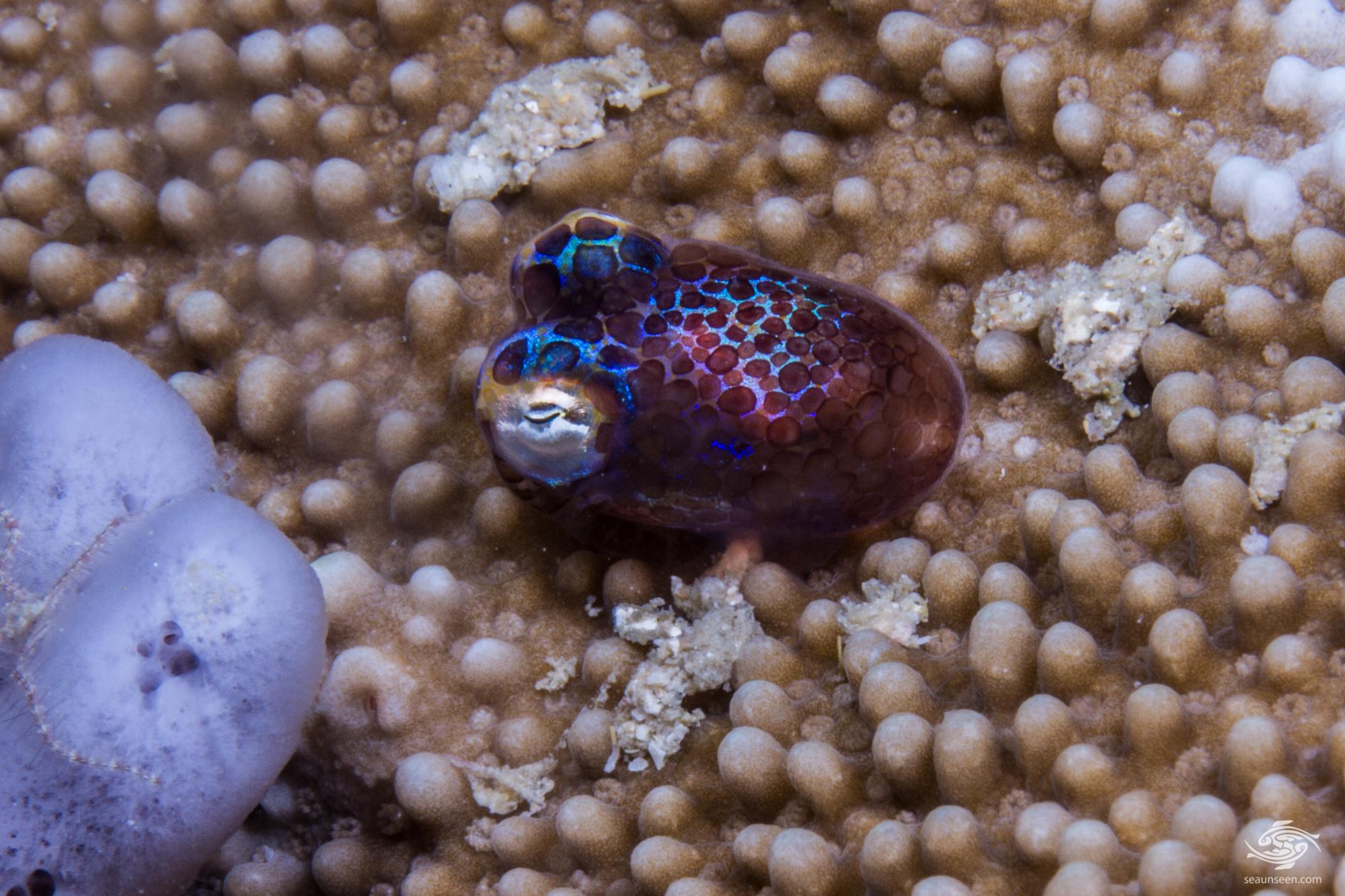 The Berry’s Bobtail squid (Euprymna berryi) and Mimika bobtail squid (Euprymna morsei) are only presently only known from Japan, China and Taiwan and from Japan, Korea, China and Malaysia and the Phillipines respectively and if these specimens prove to be either then this would be a large range extension. They have been found as deep as 107 meters but we have only seen these specimens beteen 10 and 16 meters. 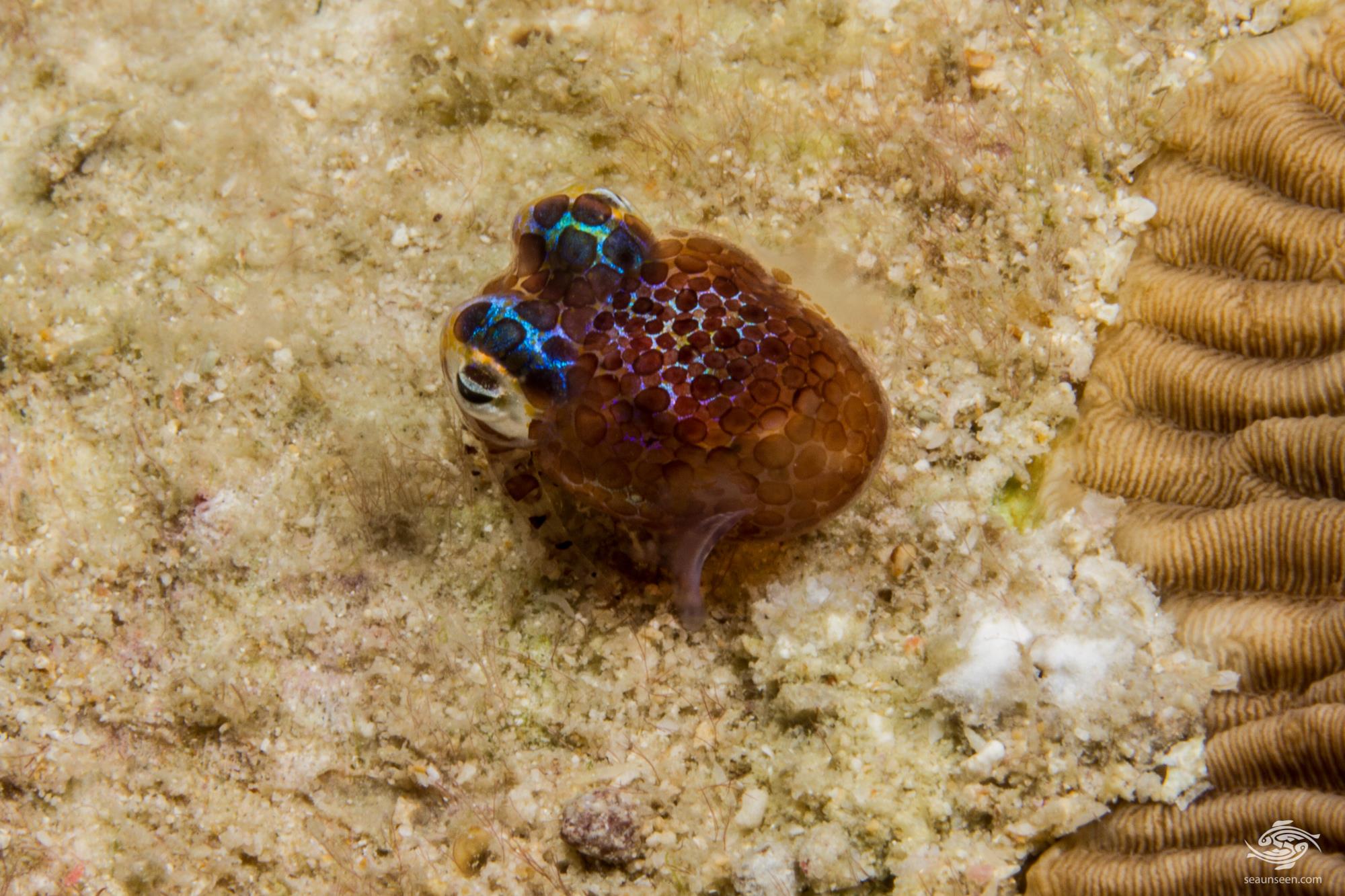 Bobtail squid are known to eat small crustaceans, in all probability they feed in a similar fashion to normal squid. These dart rapidly at their prey and seize it with their tentacles. The end of the tentacles contain large numbers of suckers which grab onto the prey. The prey is then pulled into the mouth area by retracting the tentacles. The arms are then used to hold the prey and the sharp beak bites off small pieces off the prey. 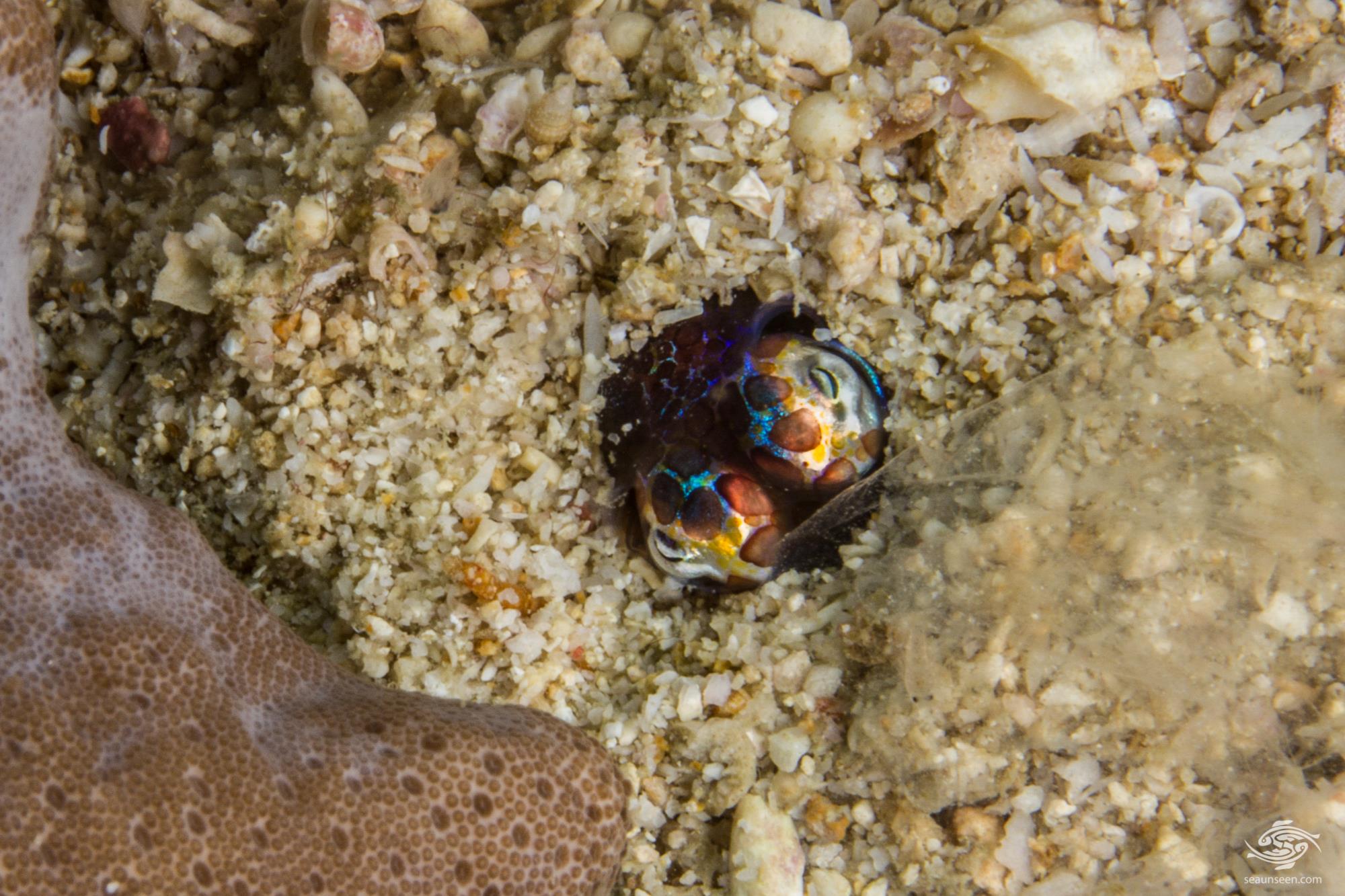 Very little seems to have been written up on their mating habits, the females are said to be larger than the males and round pale orange eggs are laid.

As a rule they are usually only kept in reaserch laboratories or some public aquaria for research purposes and they have now been captive bred by researchers.