The Broad-banded Pipefish (Dunckerocampus boylei) has not been seen in Tanzanian waters to our knowledge before the sighting of this pair off Dar es Salaam in January 2023, almost certainly because they live in small caves that are quite deep. They were first described by Kuiter in 1998 and were named after Bill Boyle a photographer who brought the fishes to the attention of  Kuiper. 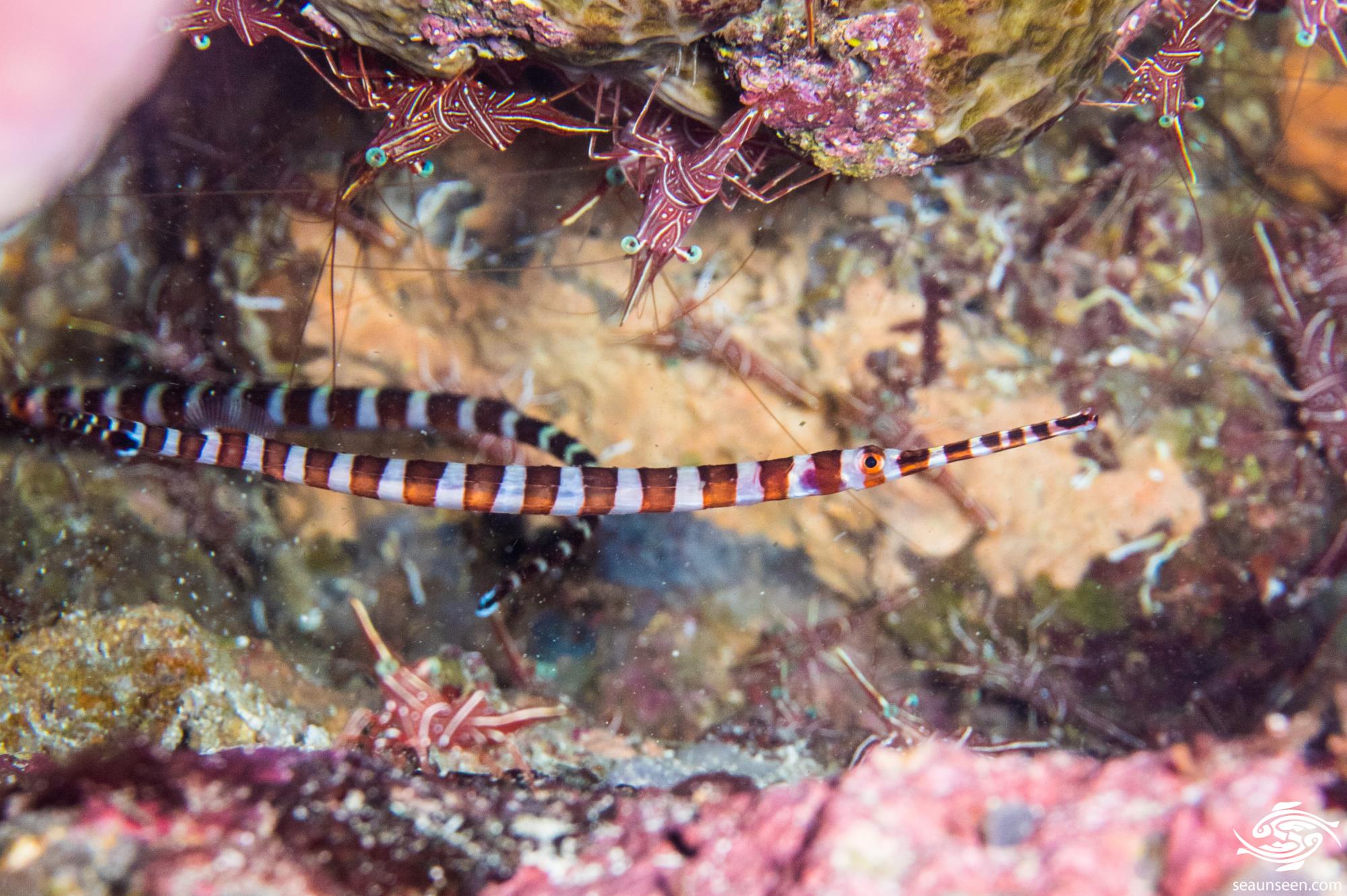 The Broad-banded Pipefish has a long thin angular body comprised of armored plates. The body color is an orange brown color under bright lighting and there are numerous broad white bands circling the body. Some of these white bands appear narrower on the top of the body than they are on the bottom in the specimens we have seen. Their eyes are proportionally large and the nose is proportionally long . The tail is a dark orange color with a white stripe on the top and bottom. 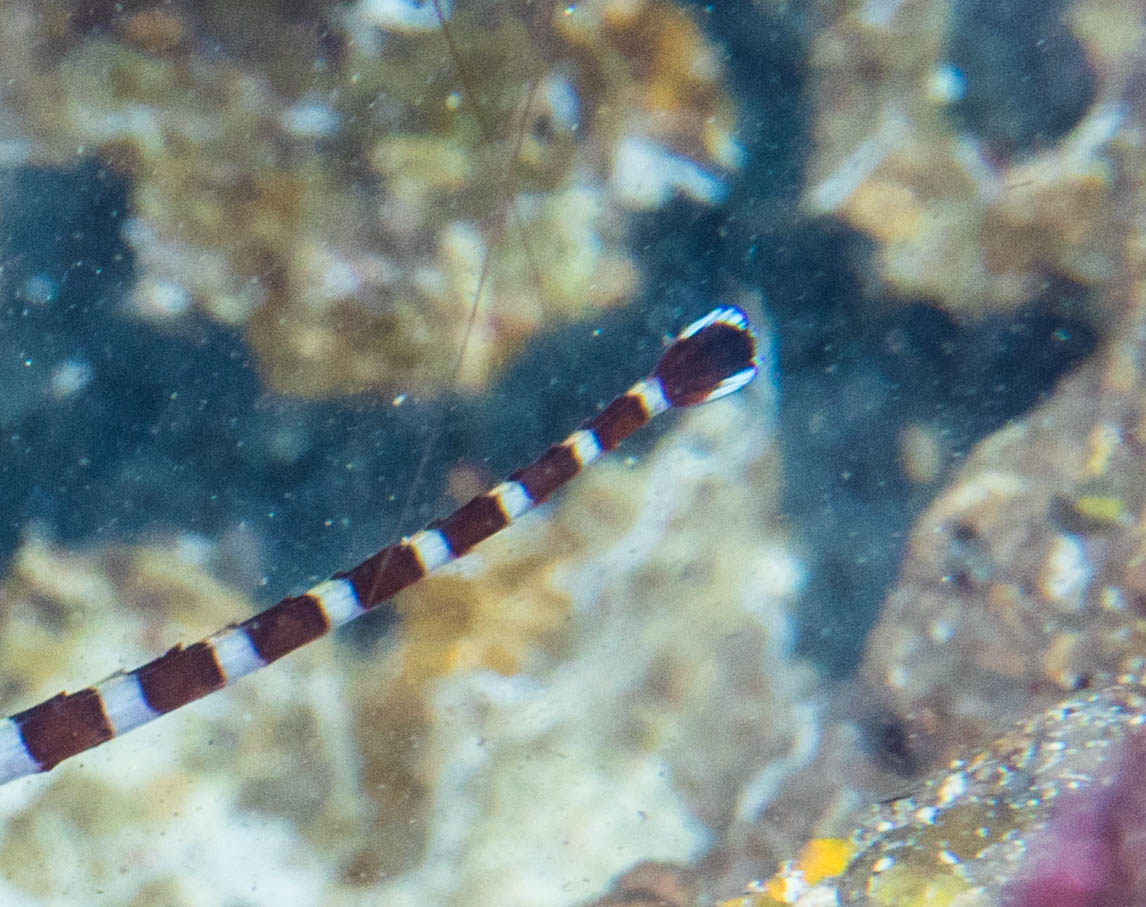 BROAD-BANDED PIPEFISH IN THE WILD

Broad-banded Pipefish are reportedly usually seen underneath overhangs or in small caves.  They are shy and one has to approach them slowly to get close for photographs.  This pair retreated quite deep in the cave and I had to turn the camera sideways to get the strobes to throw light into the cave. They have been recorded as swimming upside down but we have never seen them doing this.  They are reportedly active cleaners and are usually found in pairs. 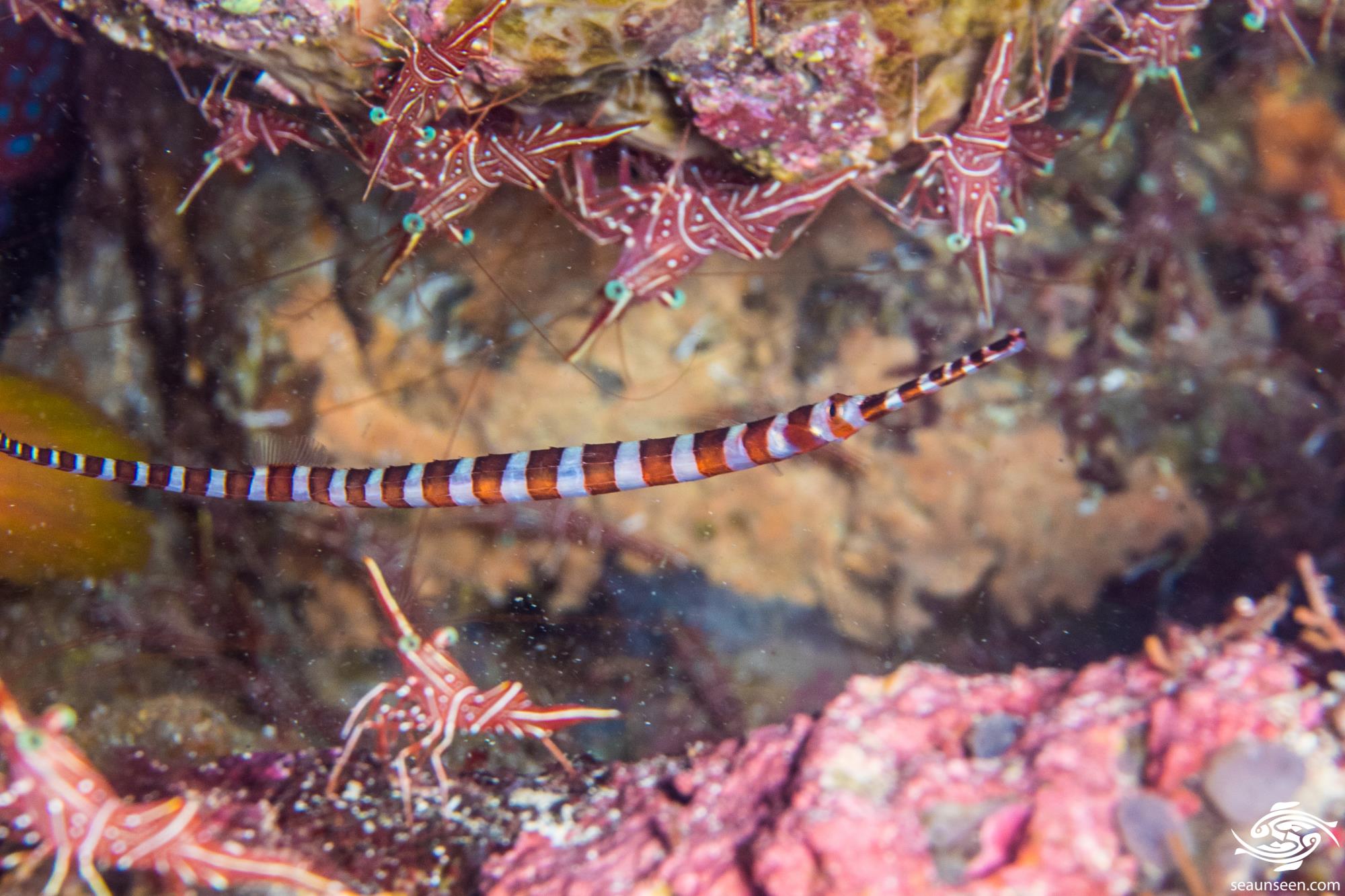 Many-banded Pipefish are recorded at the time of writing from South Africa, Mozambique, the Red Sea  Mauritius, Reunion, and in Indonesia.  They are found in small caves down to 60 meters and the pair in question were found at 36 meters in a small cave about 80 cm deep. It is highly likely they range across the entire West Indian ocean , but few people look inside caves below 25 meters. 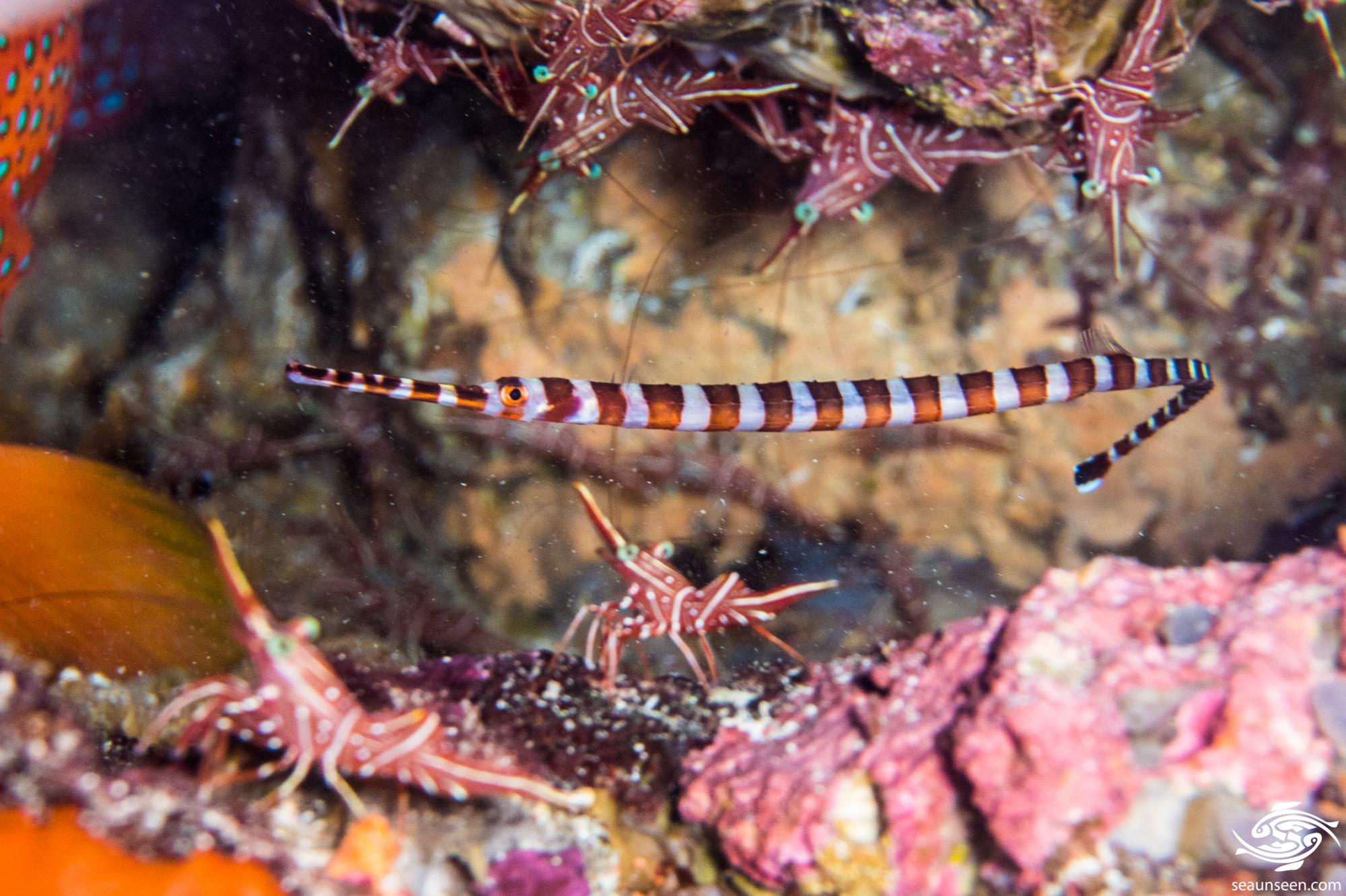 Broad-banded Pipefish are active cleaners and feed on small crustaceans attached to their client fish. They do not set up cleaner stations outside the caves and operate inside the cave. 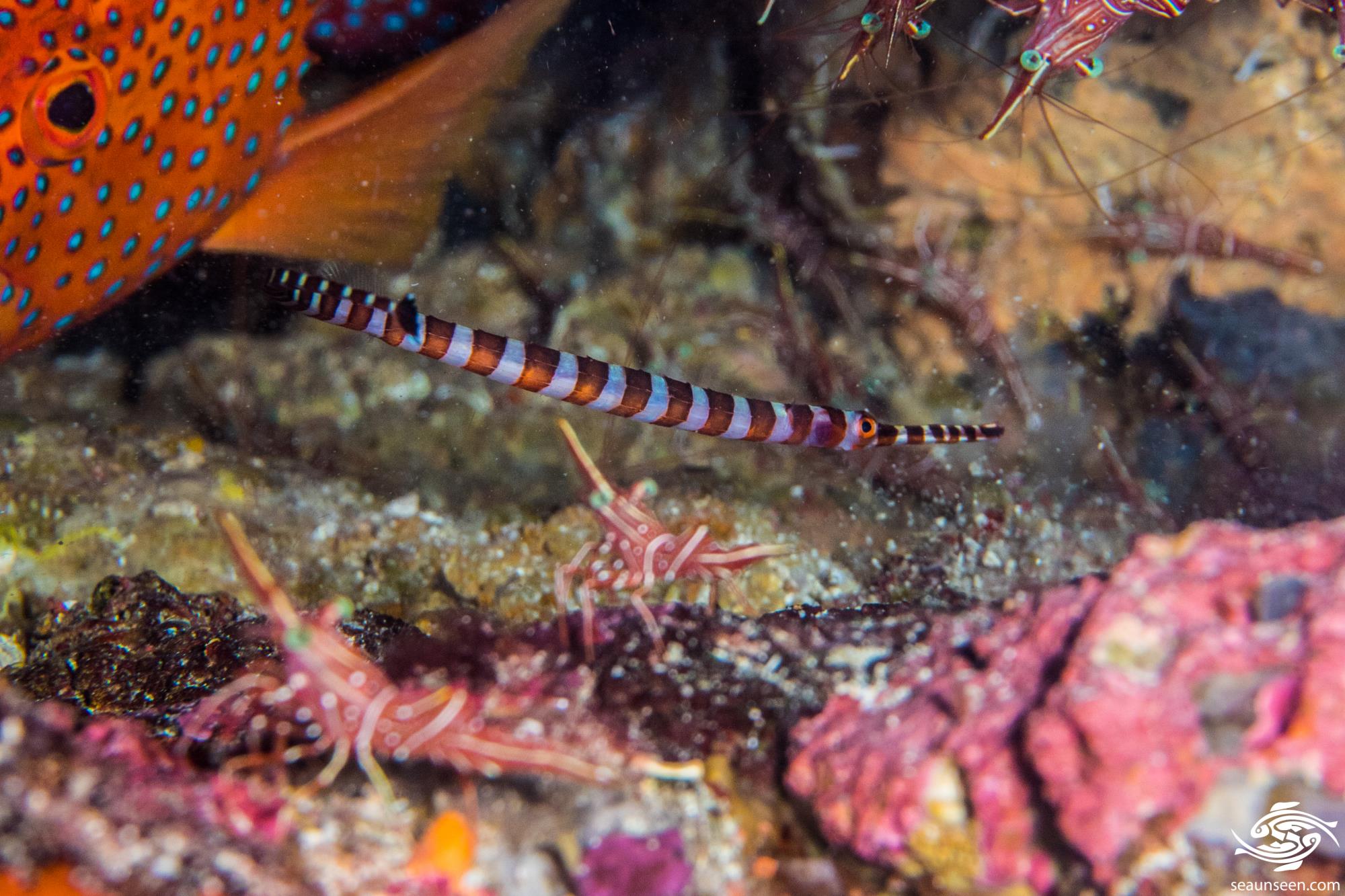 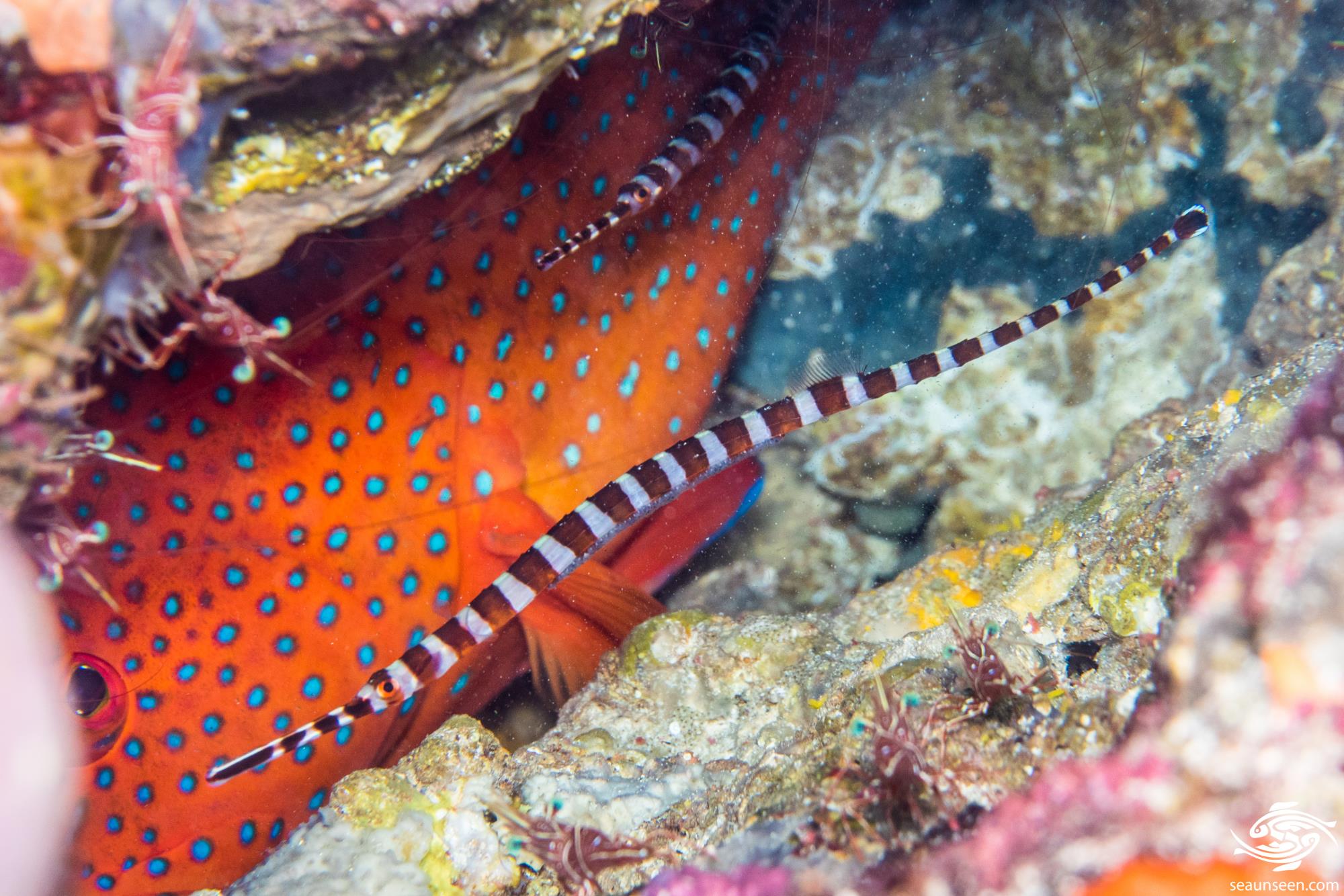 If one looks carefully along the bottom of the specimen above one can see eggs attached along the bottom.  Possibly this species does not have a specialized brood pouch on the male.

All pipefish are difficult to keep in the sense that they require live food, but for those that are cleaners perhaps the process is slightly easier provided one has sufficient fish in the tank to keep them supplied with food. There is a very good article on keeping pipefish here. Interestingly they have a long lifespan and five to ten years in a tank is not unknown.