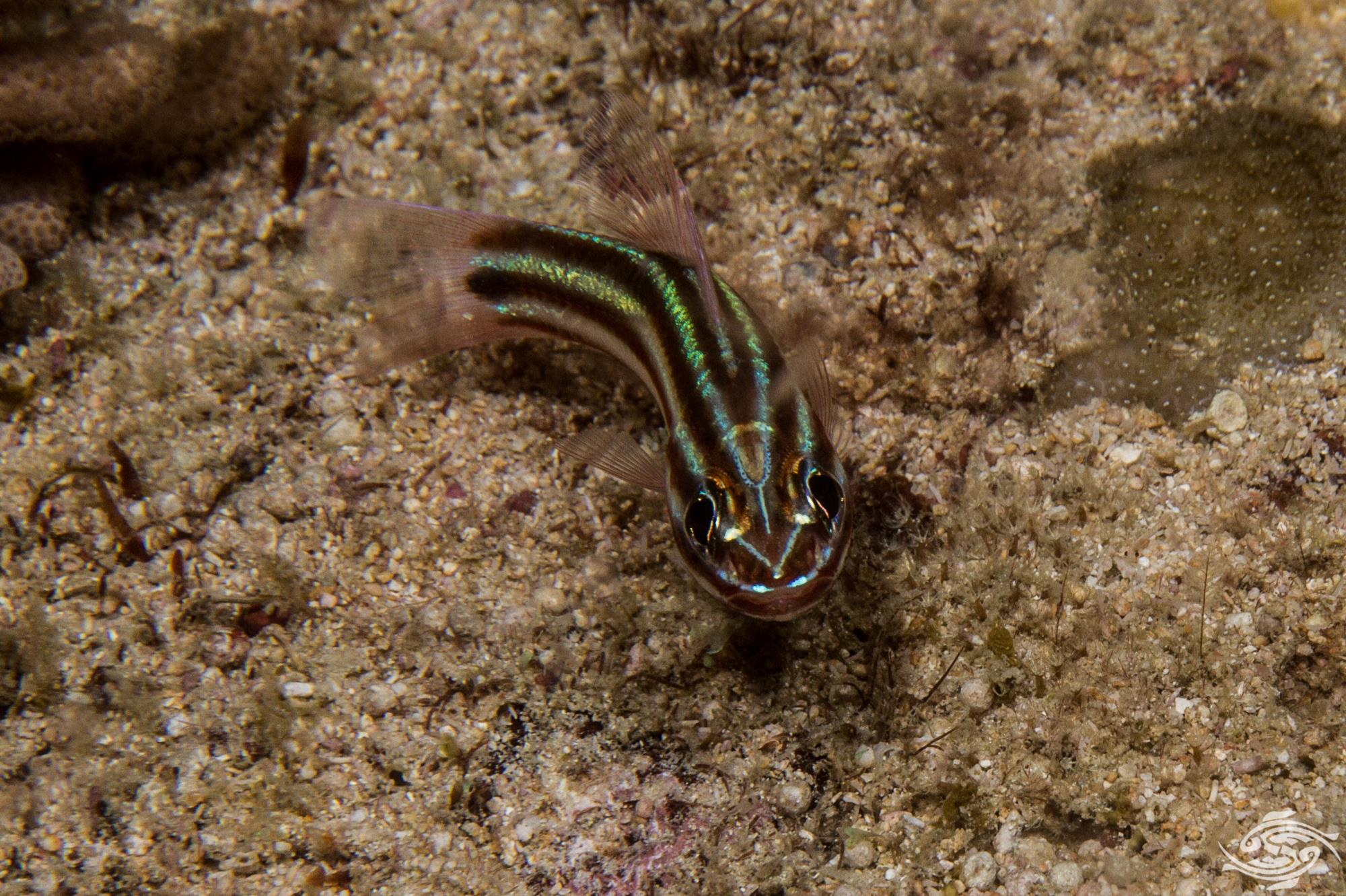 The Broadstripe Cardinalfish, Ostorhinchus angustatus is also known as the Broadstriped Cardinal fish. Previously they were known as Apogon angustatus. They are one of the few species of saltwater fish that are mouth brooders. 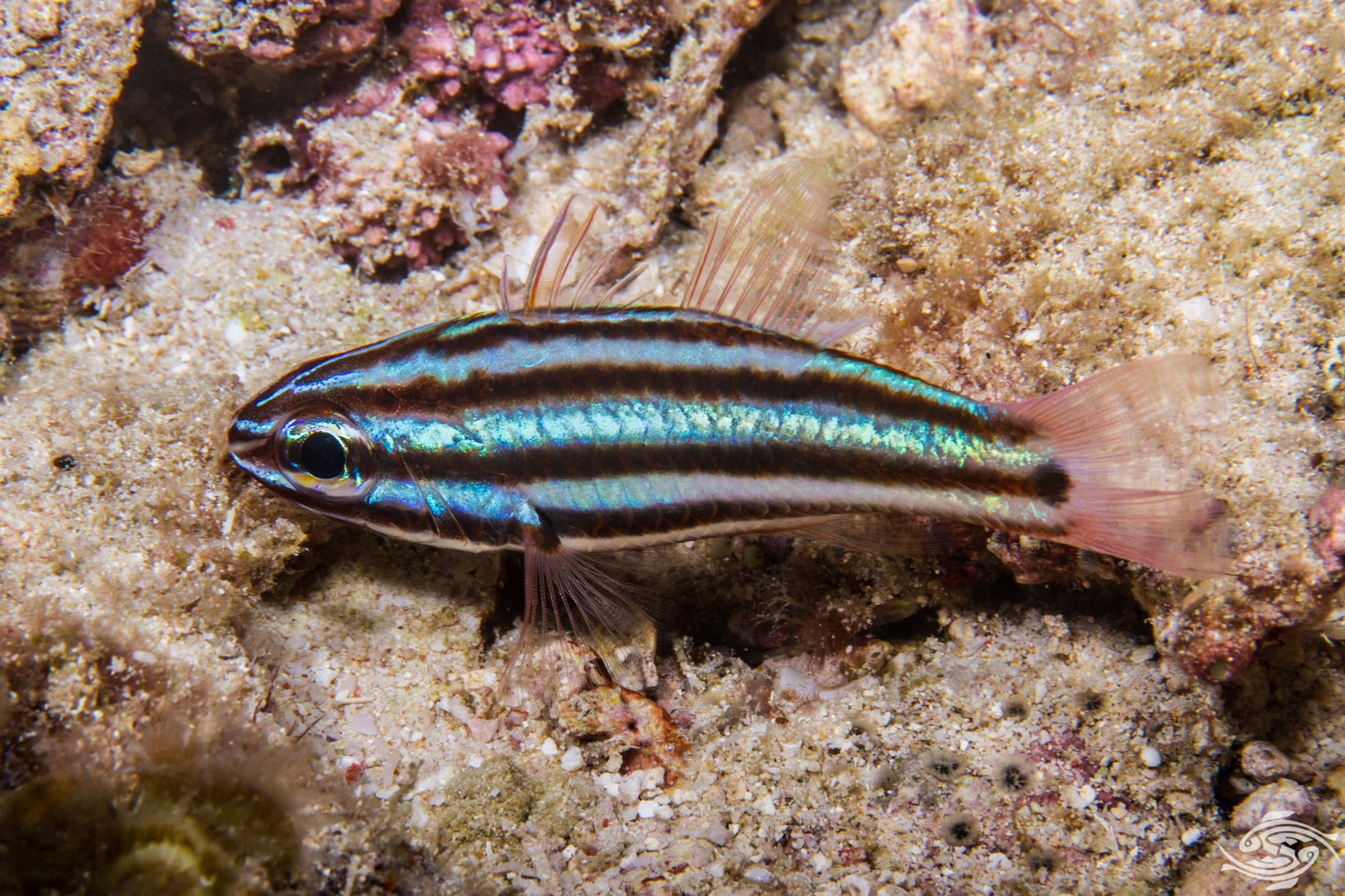 The Broadstripe Cardinalfish has proportionally large eyes and has two dorsal fins. The fins are a translucent pinky colour. The body is a silver colour with a yellowish tint during the day and a blueish tint at night. It is not known if this is a colour change or the play of the light from the strobes. Certainly the strobes on the same setting during the day do not produce a blue tint.  As can be seen by comparing the image above and below there is quite a difference. Five dark lines of approximately equal width run across the body. The middle line merges into an eye spot in the caudal area. 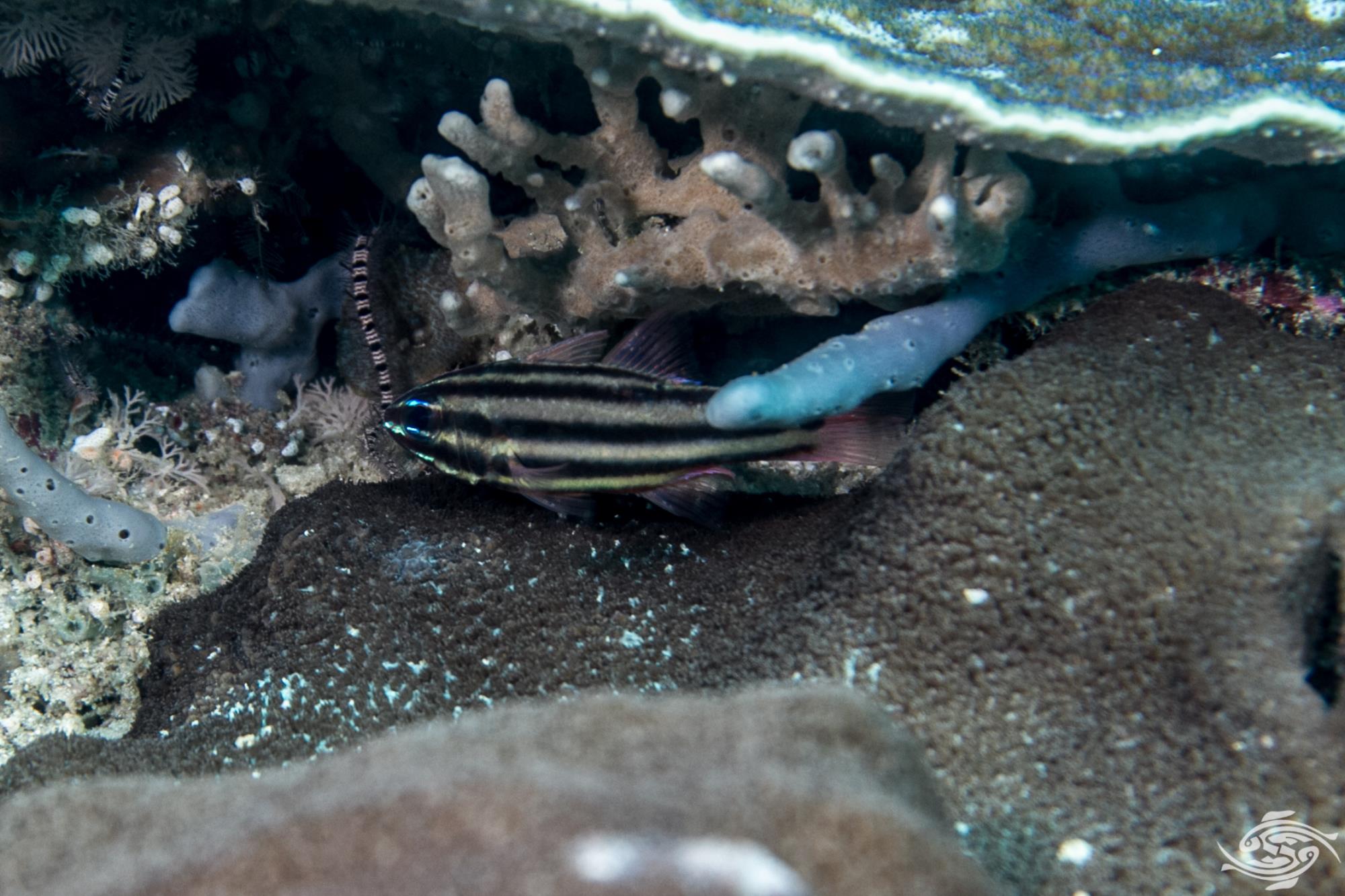 The Broadstripe Cardinalfish is fairly common in Tanzanian waters, during the day they are usually seen in small groups under overhangs or in small caves. At night they are normally always seen solitary and are almost never seen in pairs. 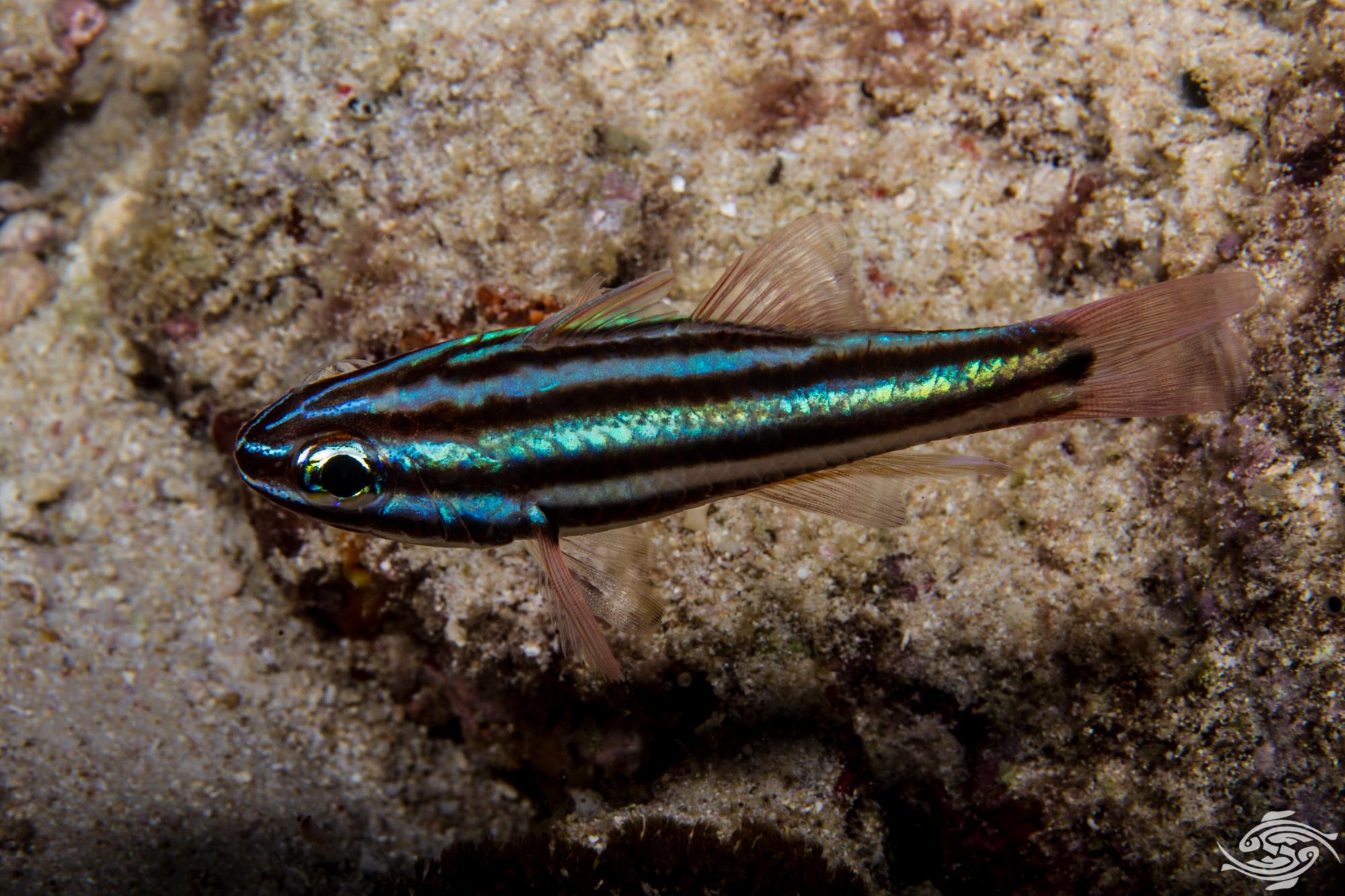 TheBroadstripe Cardinalfish is found across the Indian ocean and in the west Pacific. They are found between depths of 2-60 meters. 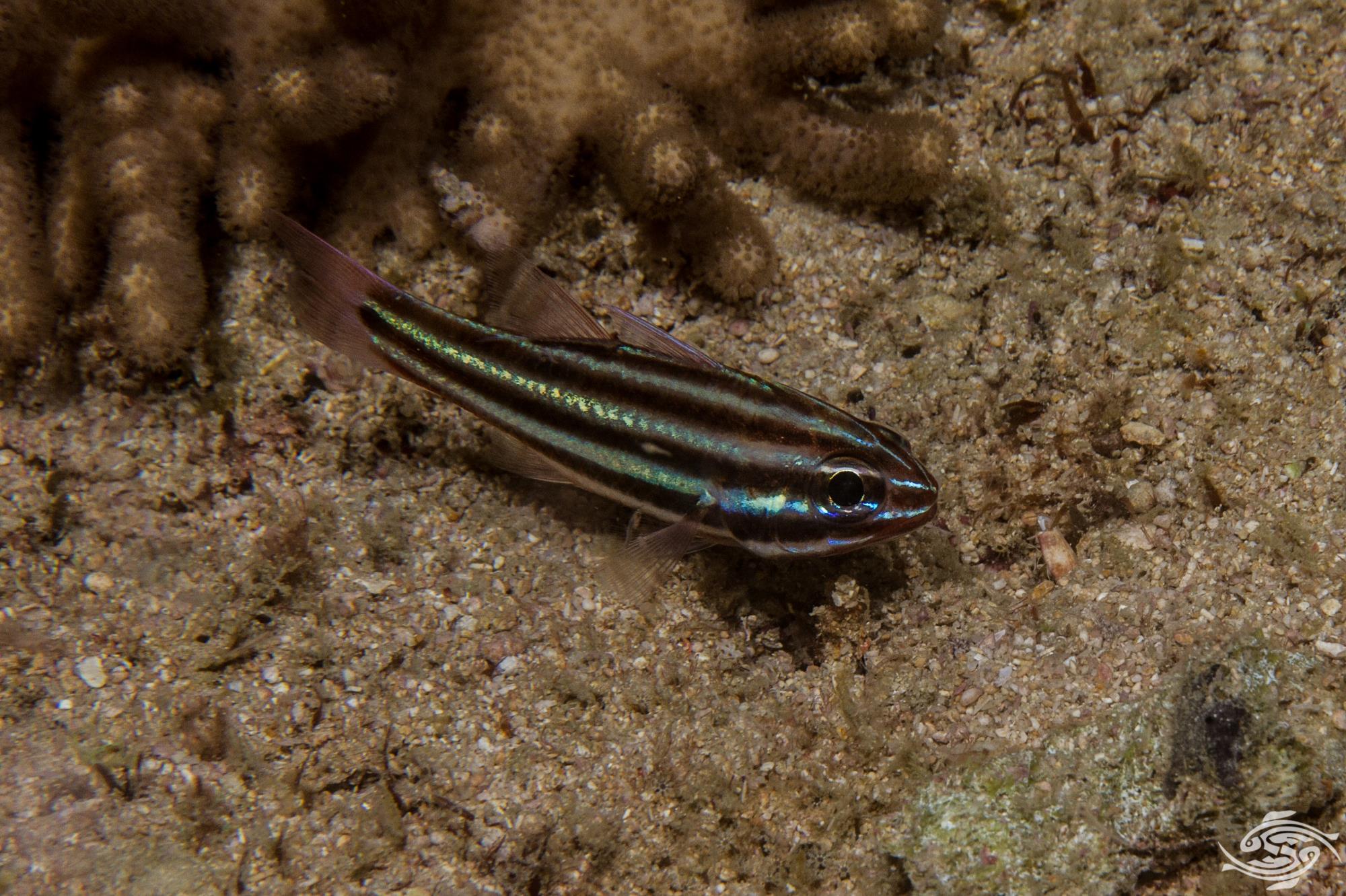 During breeding pairs are formed and after performing a mating dance, the eggs are laid by the female and fertilized by the male. The male then collects the fertilized eggs and carries the eggs in his mouth. Until they hatch the male cannot feed. Towards the end of the incubation period the males become quite skinny making the protruding mouth more noticeable. This can result in cannibalism with the male eating some of the eggs. 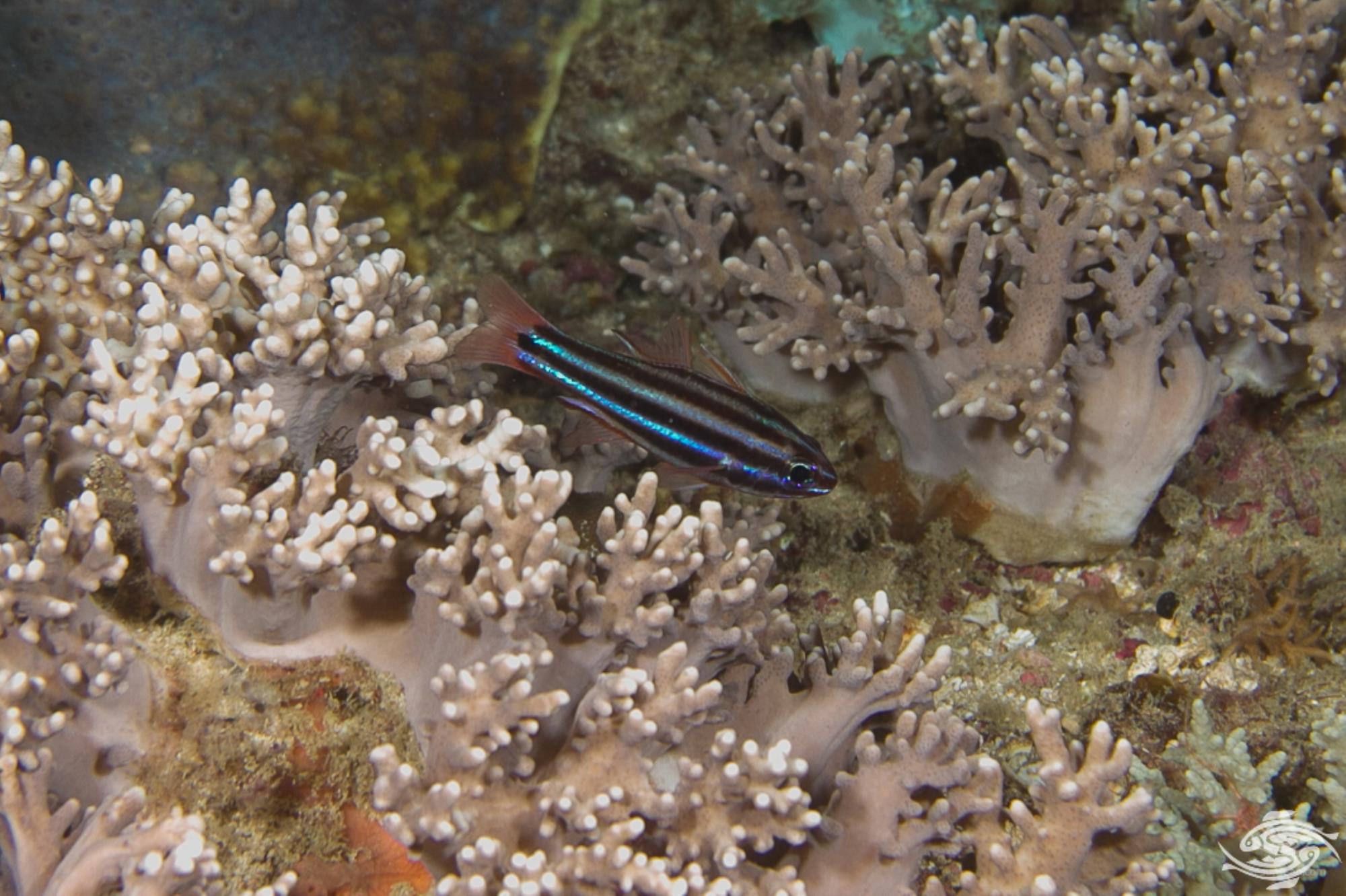 Broadstripe Cardinalfish are not commonly kept in aquariums. Some cardinalfish have been bred in captivity by breeders such as Orafarm where they are occasionally available.

Purchasing captive bred fish takes the pressure off of wild populations and if one can do so one should.
READ OUR OTHER POSTS ON CARDINALFISH HERE