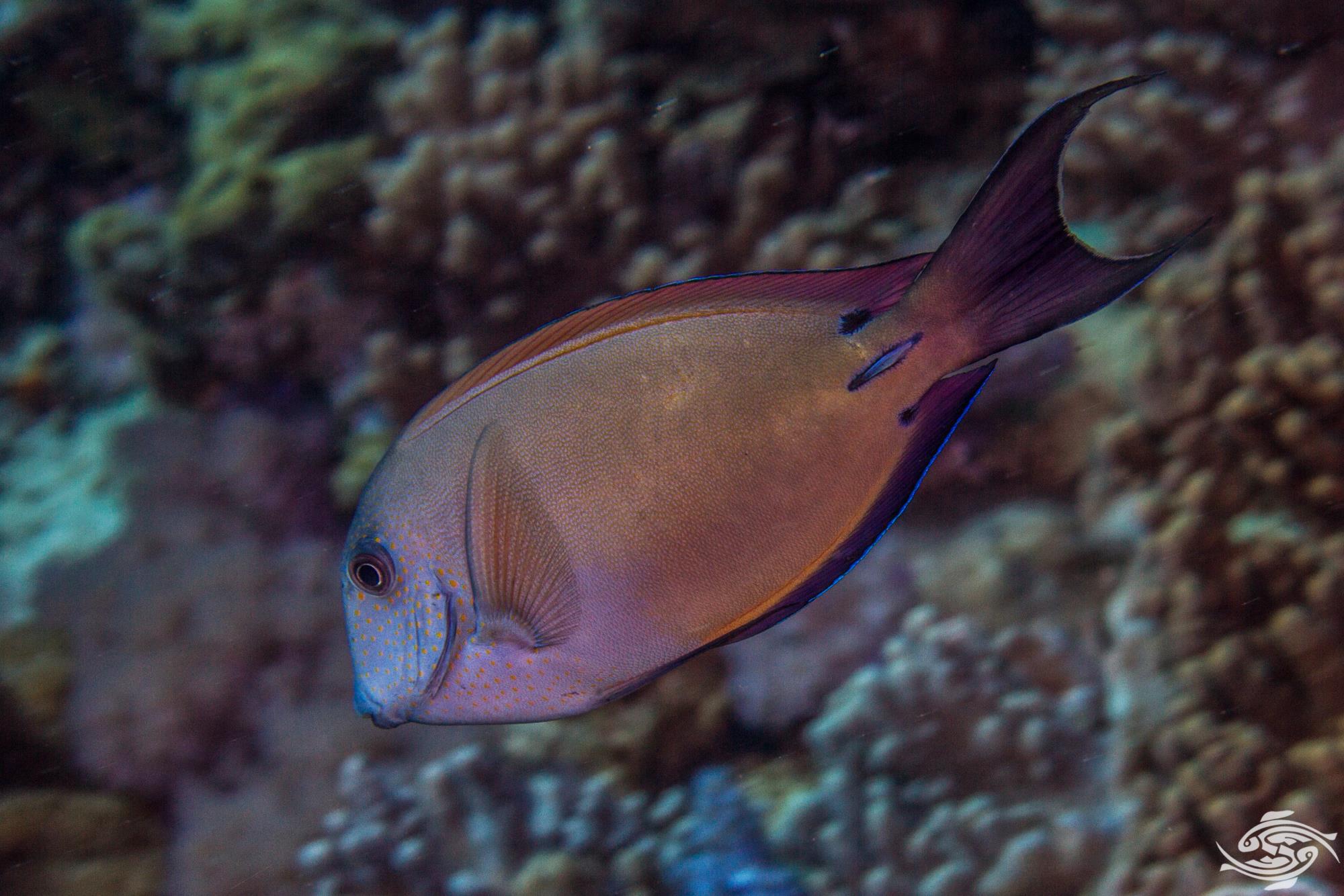 The Brown Surgeonfish (Acanthurus nigrofuscus) is also known as the Blackspot Surgeonfish, Dusky Surgeonfish, Lavender Tang and Spot-cheeked Surgeonfish. They are  common on the Tanzanian coast.

Members of the Acanthuridae family have a retractable razor sharp spine on either side of the caudal area. They obtain their name Surgeonfish from these blades.  The blades are used for defense and possibly in territorial disputes and can inflict significant damage. The blades are reported to contain toxins but there seems no scientific evidence for this.

The Brown Surgeonfish has a disc shaped body that is laterally compressed. The mouth which protrudes slightly, is low on the body and the eye is set high and quite far forward on the body giving the fish a good field of view and protecting the eyes while feeding. The body is a purple brown colour and the facial area has numerous yellow dots on it. On adults the dorsal fin is a yellow brown colour which changes to lilac at the rear. The anal fin and caudal fin are lilac.  The Brown Surgeonfish has the ability to darken and lighten their colouration with the colours ranging from drab to attractively coloured. In summer when the males enhance their colurs for breeding purposes they are attractive looking fish.

They grow up to 21 cm in length but around 18 cm is more common in the wild. The juveniles pictured further below in the post are similar to the adults in coloration. 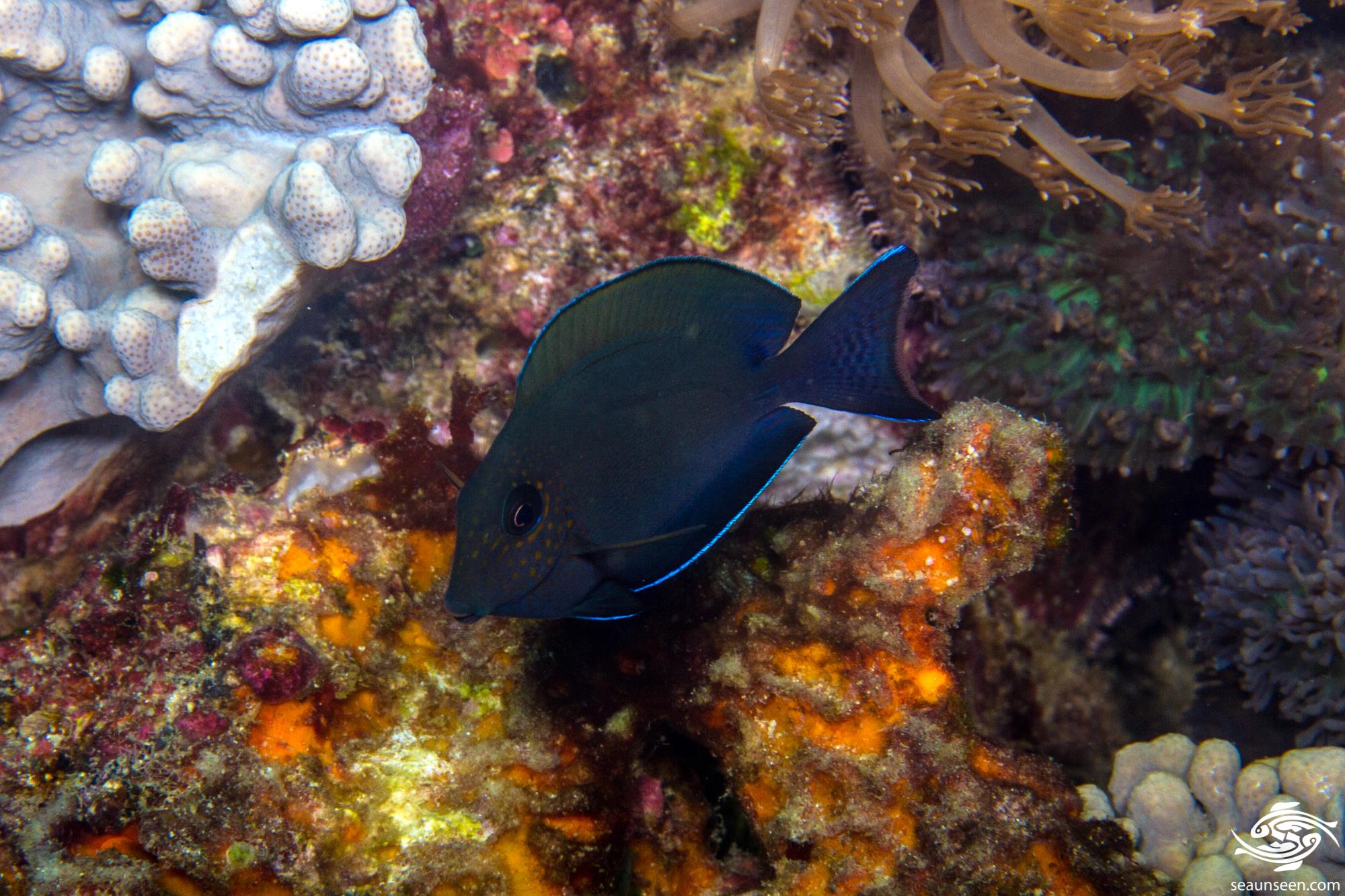 BROWN SURGEONFISH IN THE WILD

The Brown Surgeonfish is very common in Tanzanian coastal waters.  Usually they are seen solitary but occasionally are seen in small groups of three to five fish.

They seem to prefer reef flats with abundant algae growth but will also occasionally be seen over rubble areas. Brown Surgeonfish are active fish, always on the move and always feeding. They are more common in the 8 to 20 meter range and are seldom seen below 20 meters . The juveniles are often seen in the shallows on protected reefs from 1 to 5 meters. 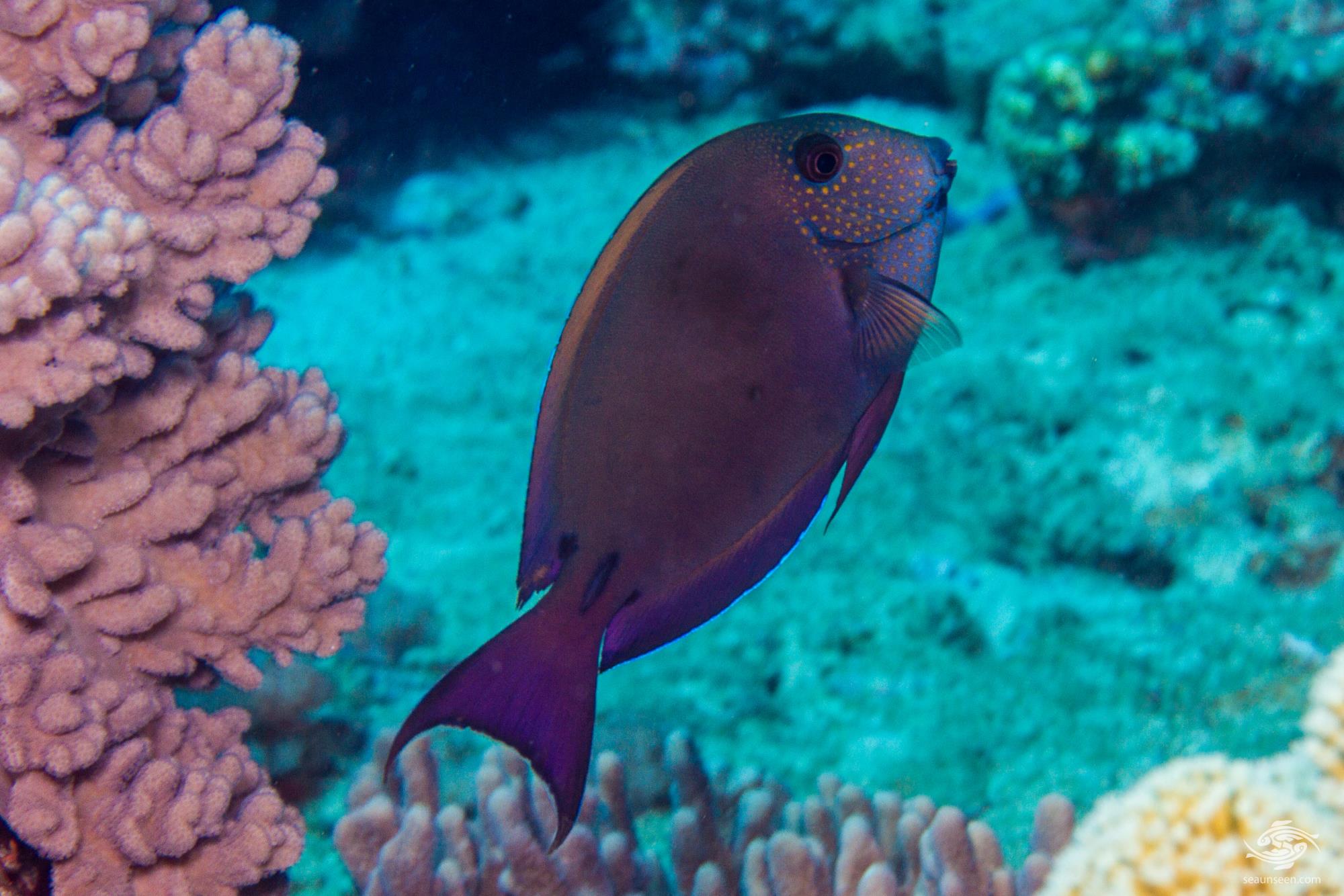 Brown Surgeonfish are found across the Indian and West Pacific Ocean’s from South Africa north up the coast of East Africa to the Red Sea and across to Southern Japan, down to Australia and across to Hawaii. 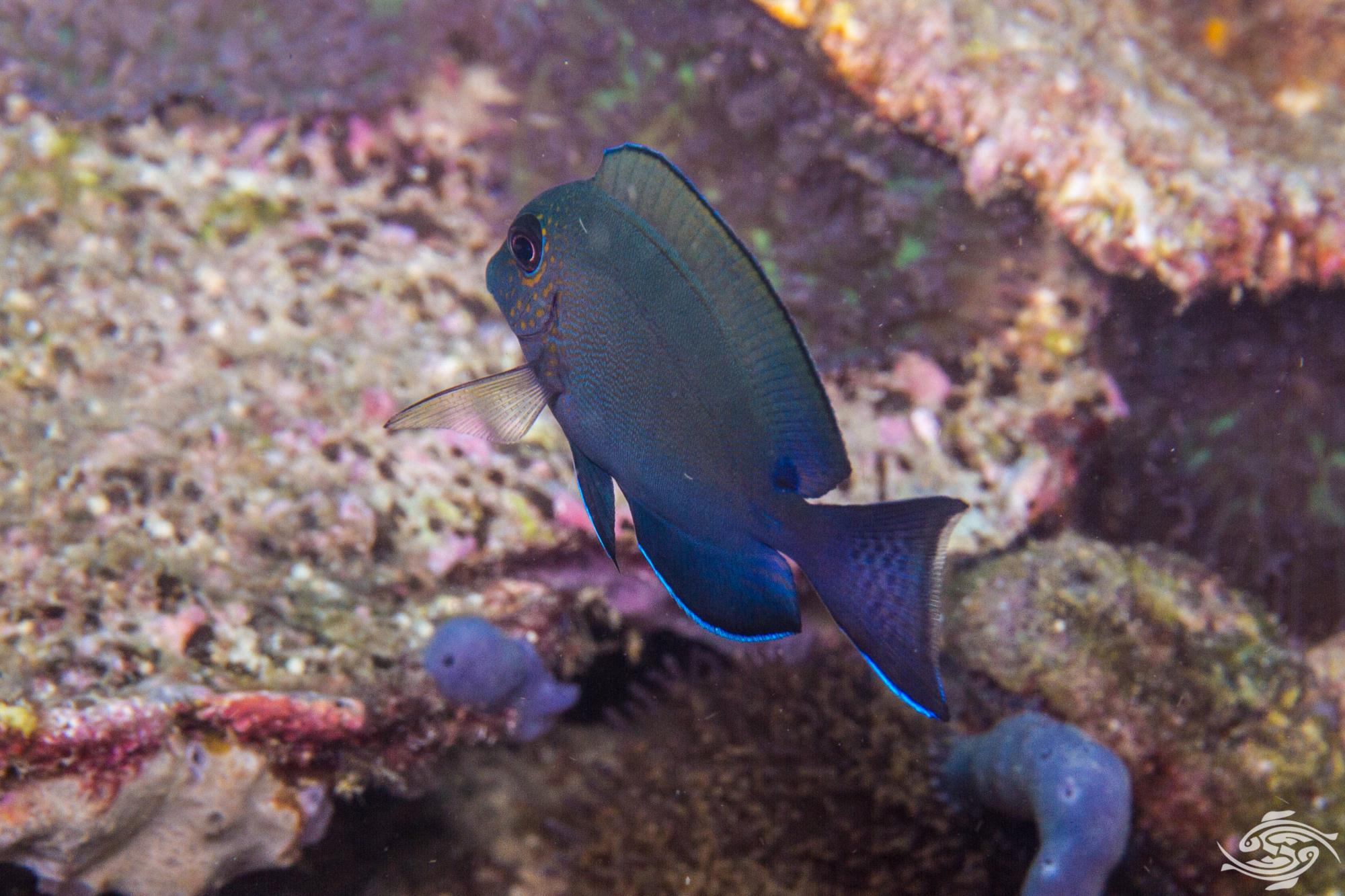 The Brown Surgeonfish are grazers and feed on benthic algae ( algae growing on the bottom) with their favorite food being red algae. Of interest are the bacteria found in the stomach of the fish. These named Epulopiscium fishelsoni are amongst the largest bacteria in the world and are visible to the human eye, being about the size of a full stop. These bacteria allow them to digest their diet of algae which requires considerable processing to extract nutrients. The adults are often seen feeding individually in East Africa but on occasion three to four fish are seen together feeding whereas the juveniles are often seen alone feeding with other species. 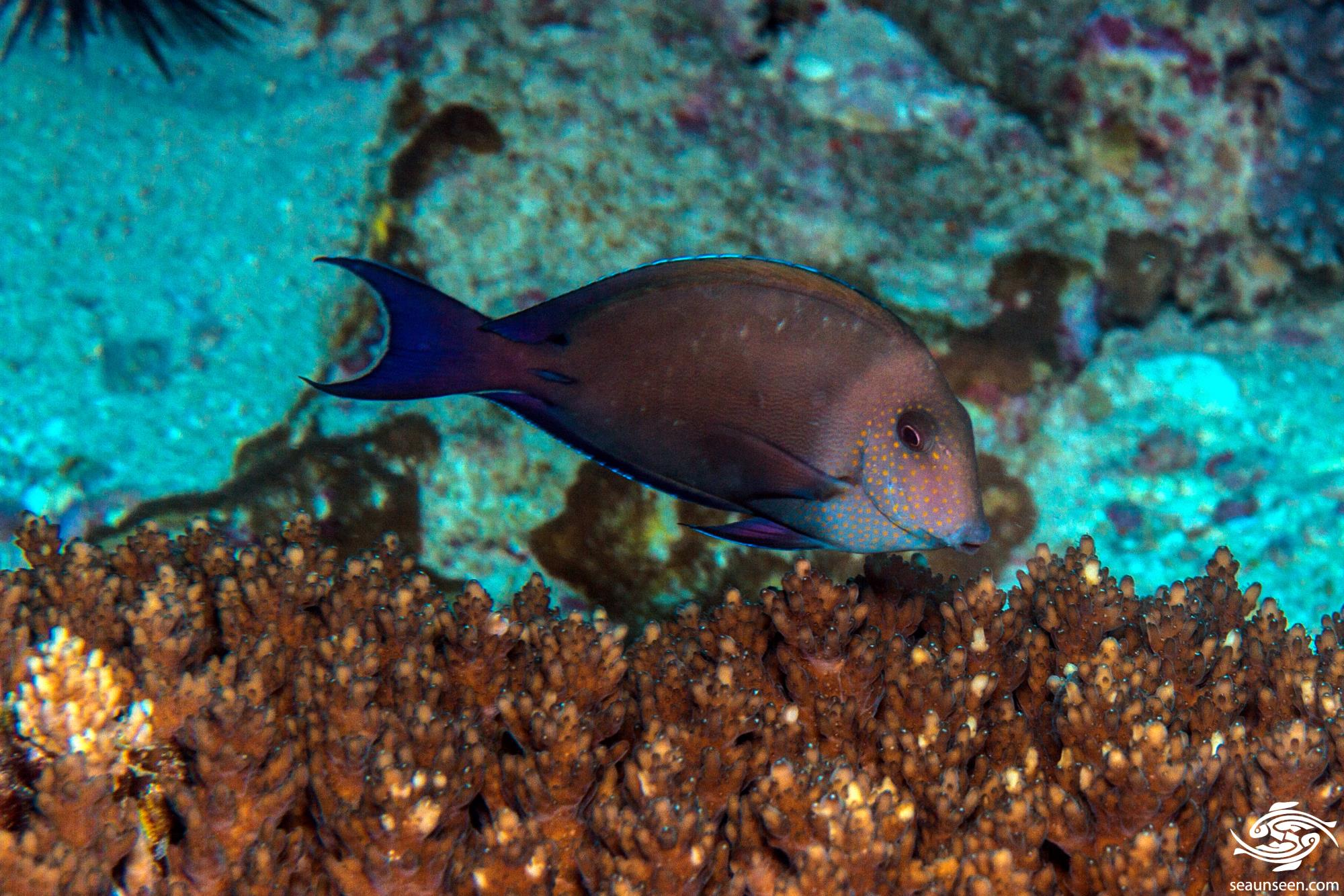 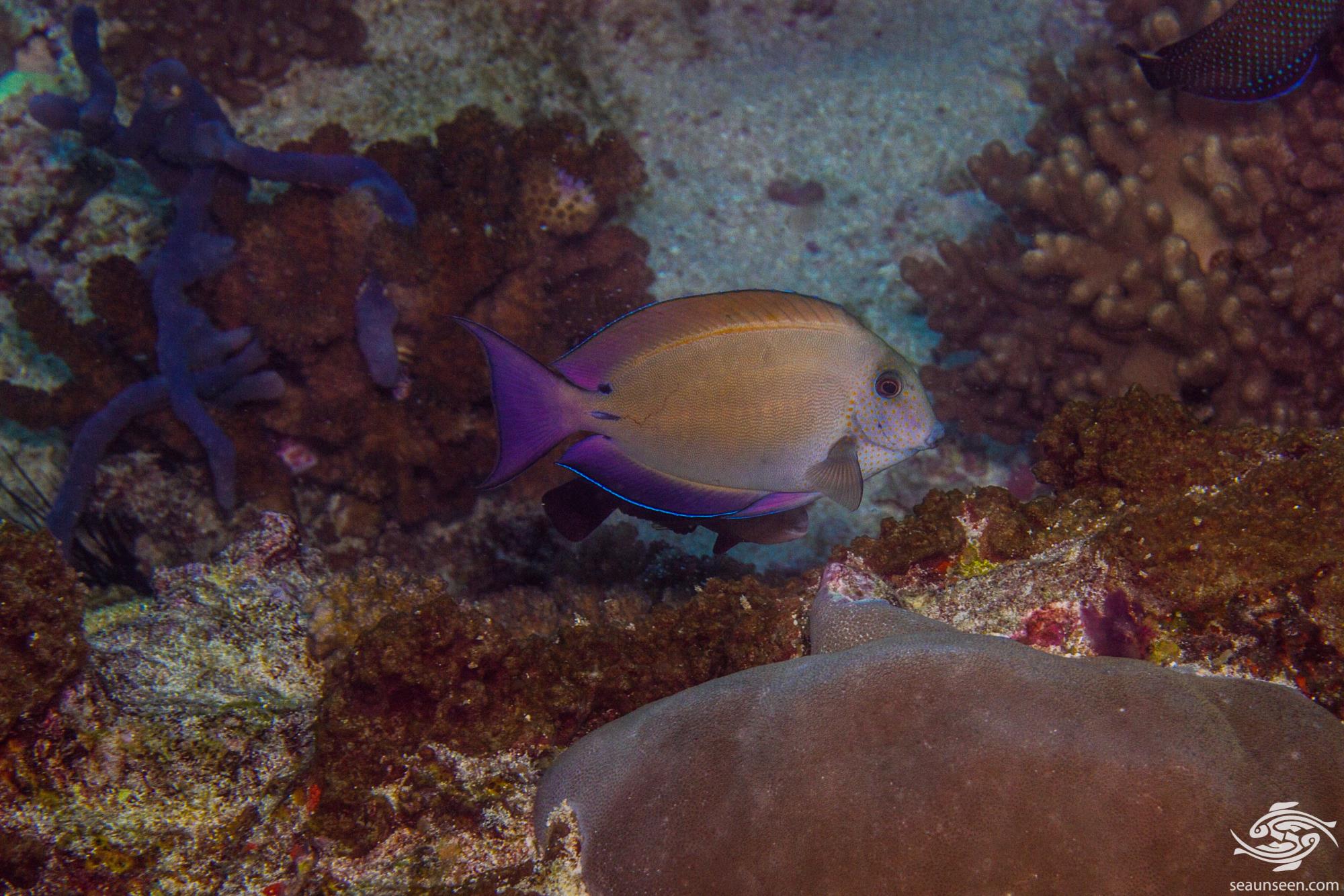 Brown Surgeonfish are kept in aquariums and  require high quality clean water that is well oxygenated. They are fairly easy to feed but a big part of their diet should be algae in one form or another to keep them healthy. They do best in a mature tank with lots of algal growth.

As with a Surgeonfish, because of their territorial nature they should not be kept with fish with a similar shape or diet. They may percieve these as a threat and will likely fight with any percieved threat to their food source. Great care should be taken when moving them as their blades can easily snag in a net or worst case pierce a bag.