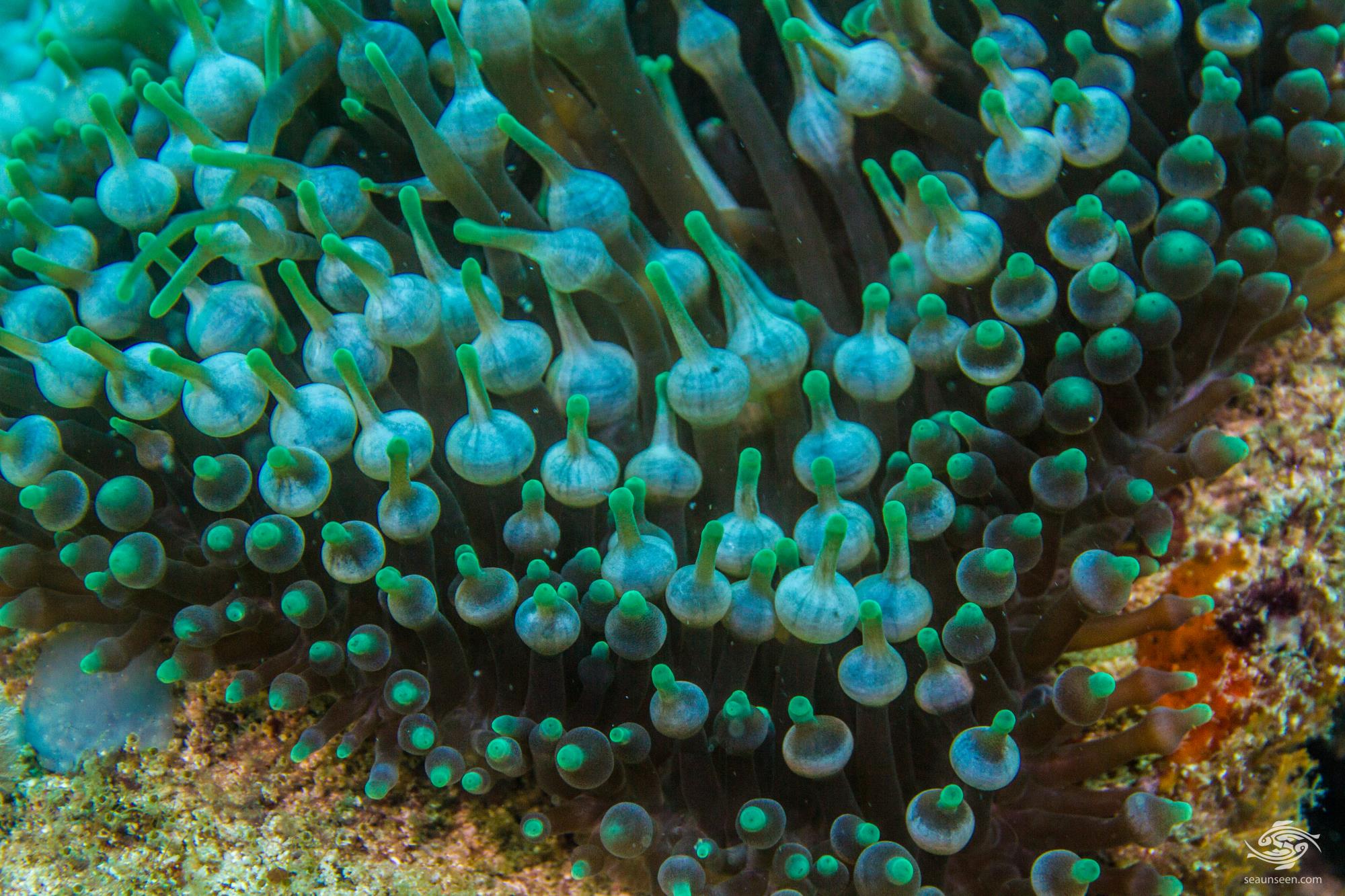 The Bubble-tip anemone (entacmaea quadricolor) is also known as the BTA in the aquarium trade. They are one of the more attractive looking anemones although their colors can vary from drab to brightly colored.

They obtain their name from the swellings on the end of the tentacles. However not all specimens exhibit these bubbles and they vary greatly both in color and in looks. They are not that common on the East African coast, compared to for example the Magnificent Anemone, but on rare occasions are seen in very high densities in an area, more on that later though. 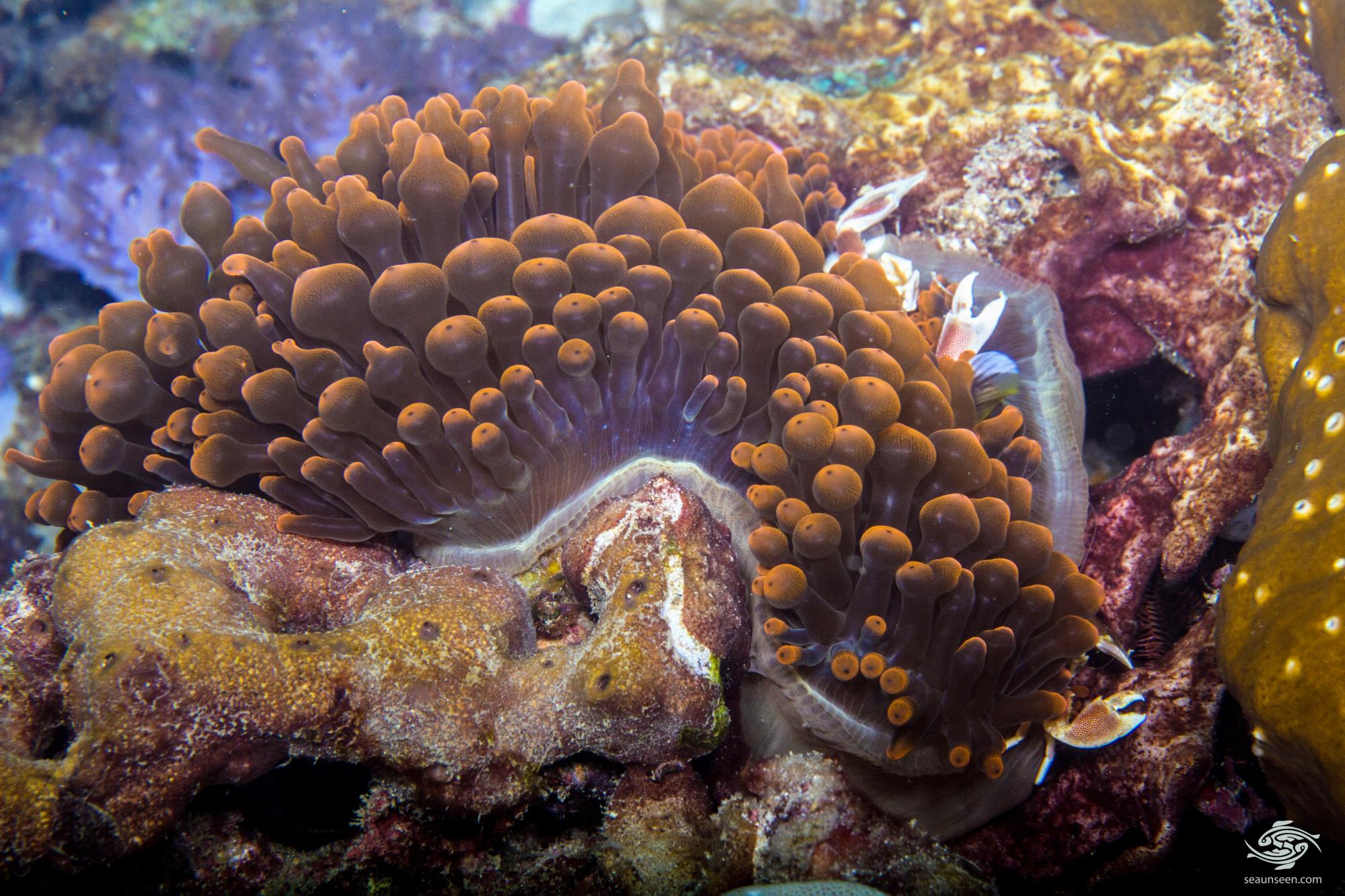 The name Bubble-tip anemone is a bit of a misnomer, as not all the specimens exhibit the bubble tips and in fact diving in Tanzanian waters one sees far more specimens without bubbles than with bubbles.  It is very difficult to say whether all specimens have the ability to expand in this way or indeed whether there is any purpose behind the bubbles.

One could theorize that the bubbles provide more surface area for photosynthesis to take place because the majority of the specimens with bubbles are found from 14 meters upwards but it may be difficult  to prove this.  The colors vary greatly as well , with brown being the most common colour followed by green then orange and with red being extremely rare in the wild.  On one occasion I found a green, white and red specimen with bubbles and this has to be the most beautiful organism I have ever seen in the sea. Unfortunately I never had a camera with me. 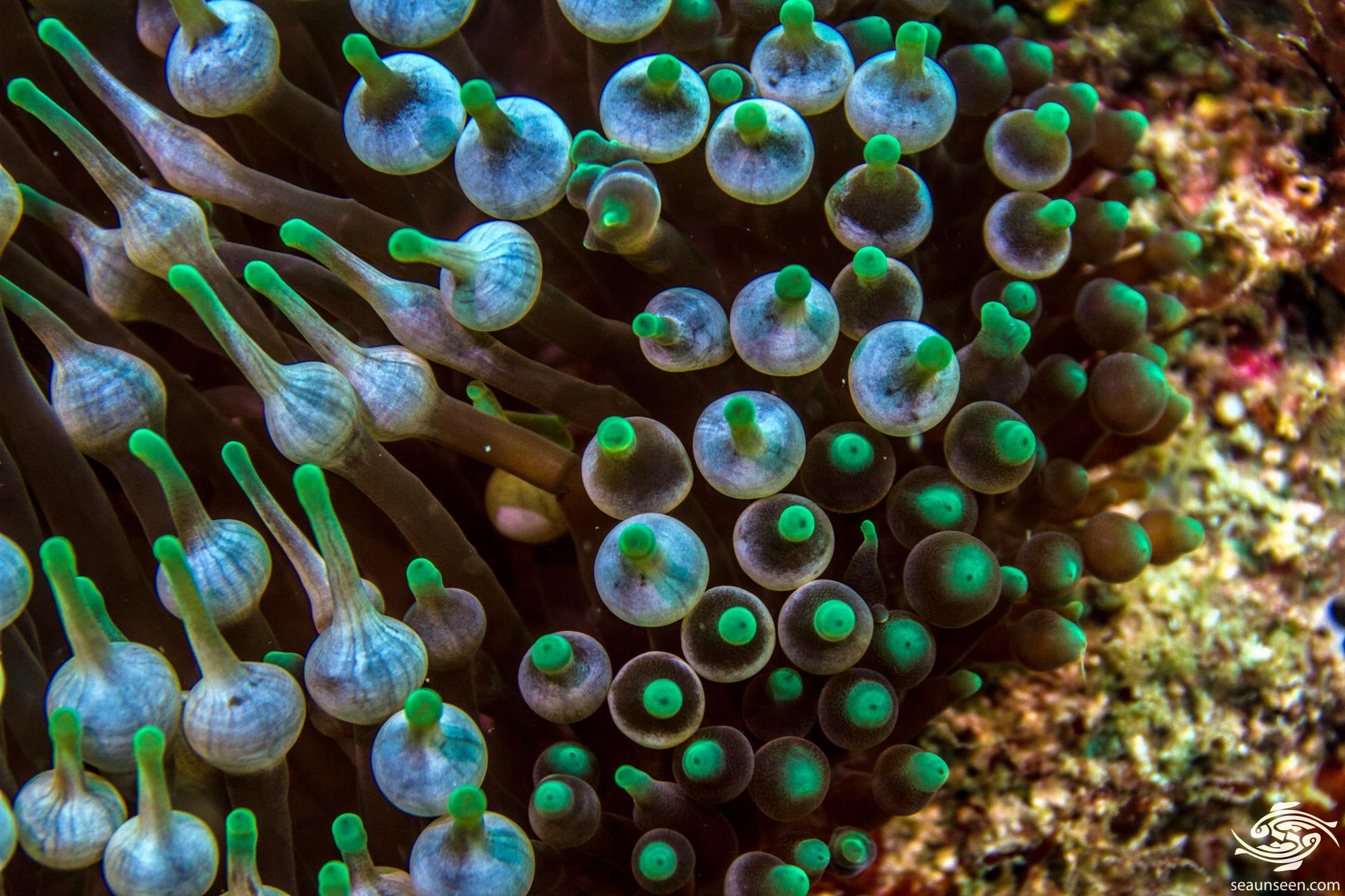 In the specimens without bubbles the tentacles appear to be far longer than in the ones with bubbles. As a general rule the anemones with the longer tentacles are much larger and one tends to find them deeper however one finds constant exceptions to this rule, but more so in that one finds longer tentacled specimens in the shallows rather than specimens with bubbles that are deeper.  The largest specimen I have seen was at around 40 meters at the bottom of a wall and it had a diameter of at least 60 cm. When we next dived in the area the anemone or possibly an identical one had moved some 10 meters up the wall. 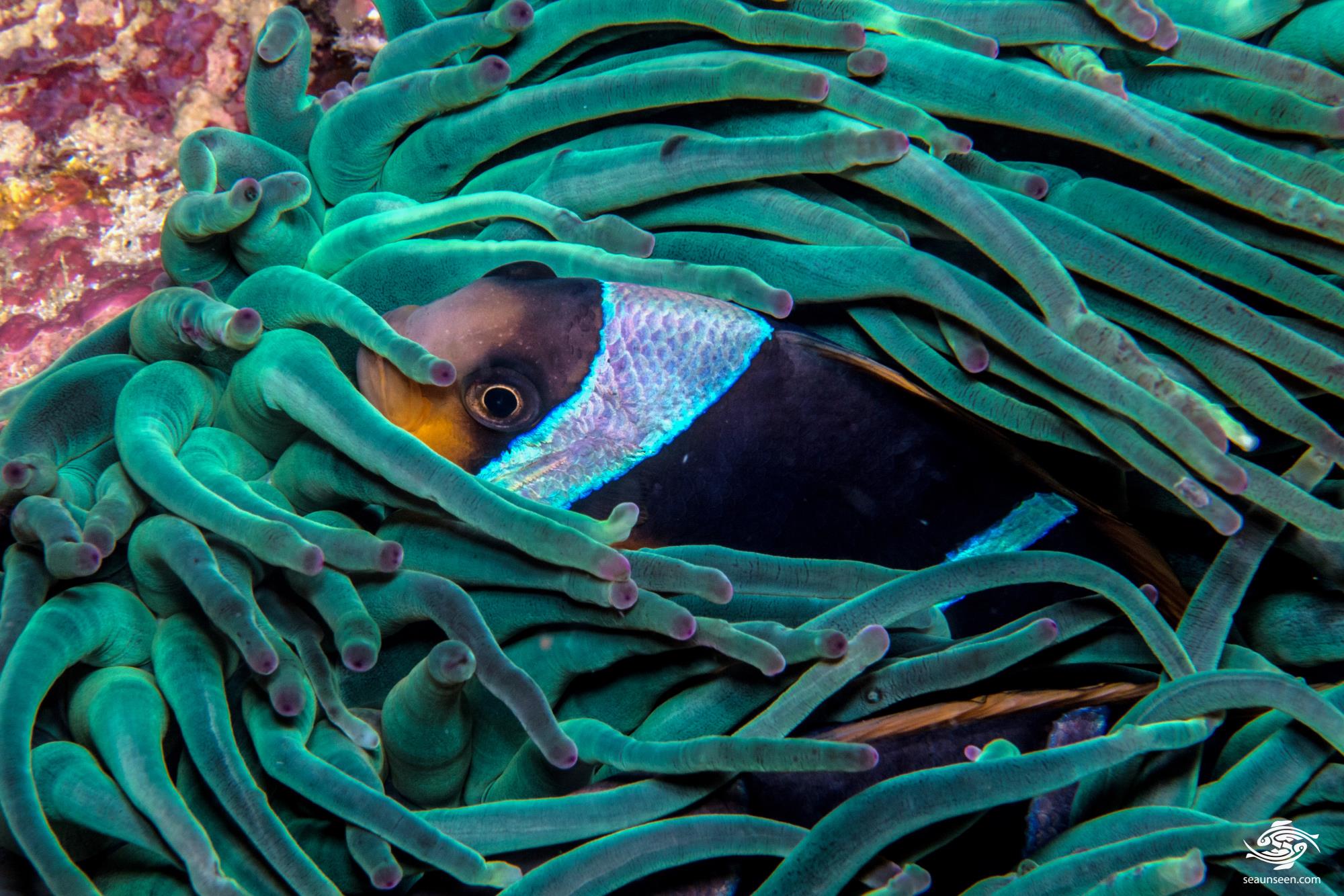 In the image above , to scale the size of the tentacles, the clownfish is a full grown Allard’s Clownfish at some 12 cm in length. The tips of these longer tentacled species are usually purple on the ends making them fairly easy to identify. 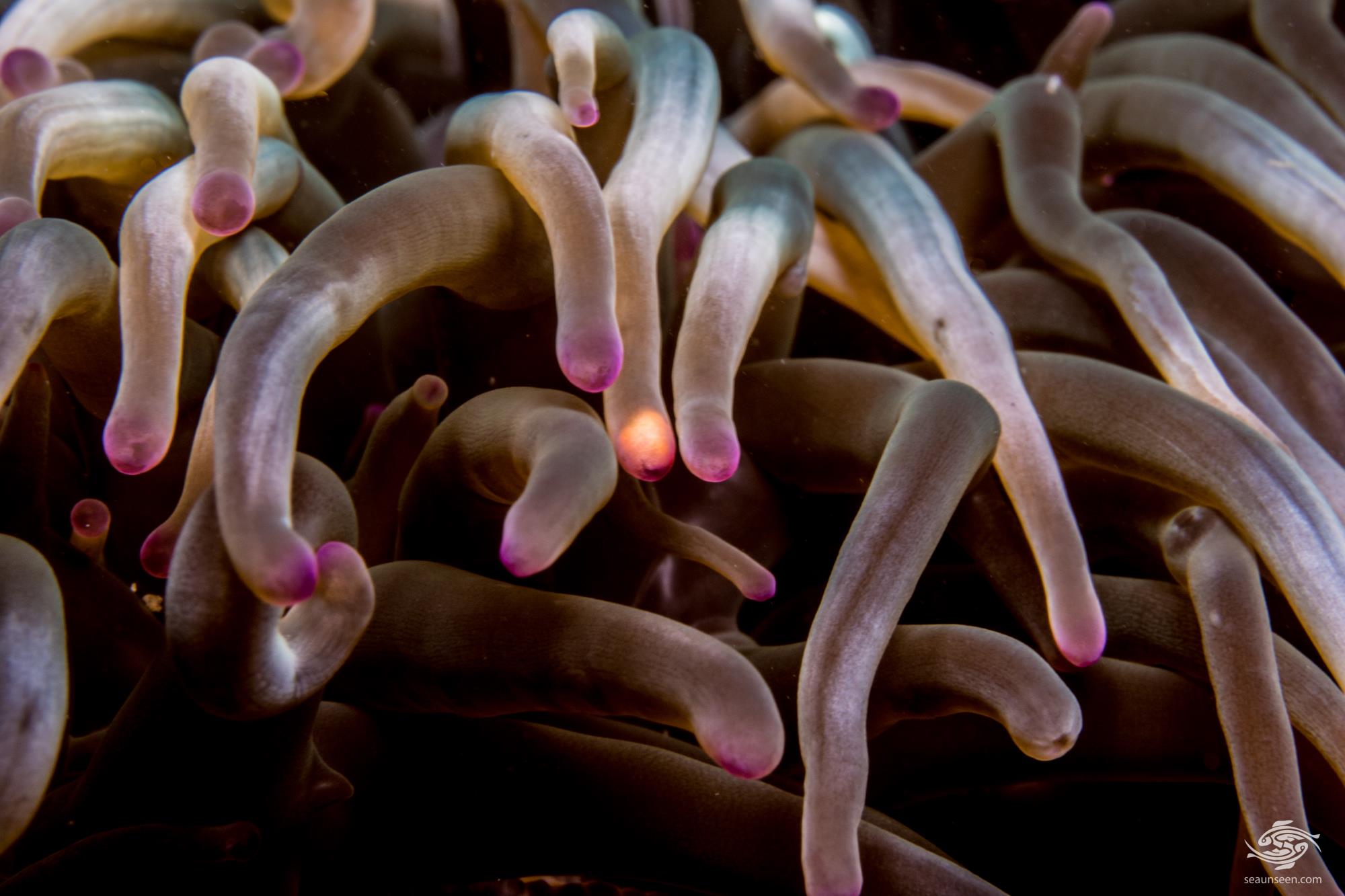 However some specimens such as the one in the image below have white tips on the end of the tentacles.  The anemone below was photographed at Cryptomania dive site in Mtwara in some 15 meters in a sandy/rubble channel. It is unusual to find them in such locations and they are usually in areas with a more solid substrate.

Common wisdom used to dictate that only when the Bubble-tip anemones were content with their surroundings that they would exhibit the bubbles but as can be seen in the image below photographed in the shallows off the west coast of Mafia Island in Tanzania in 2016, during a bleaching incident, the anemone below has expelled all of its zooxanthella yet is still putting its bubbles up. 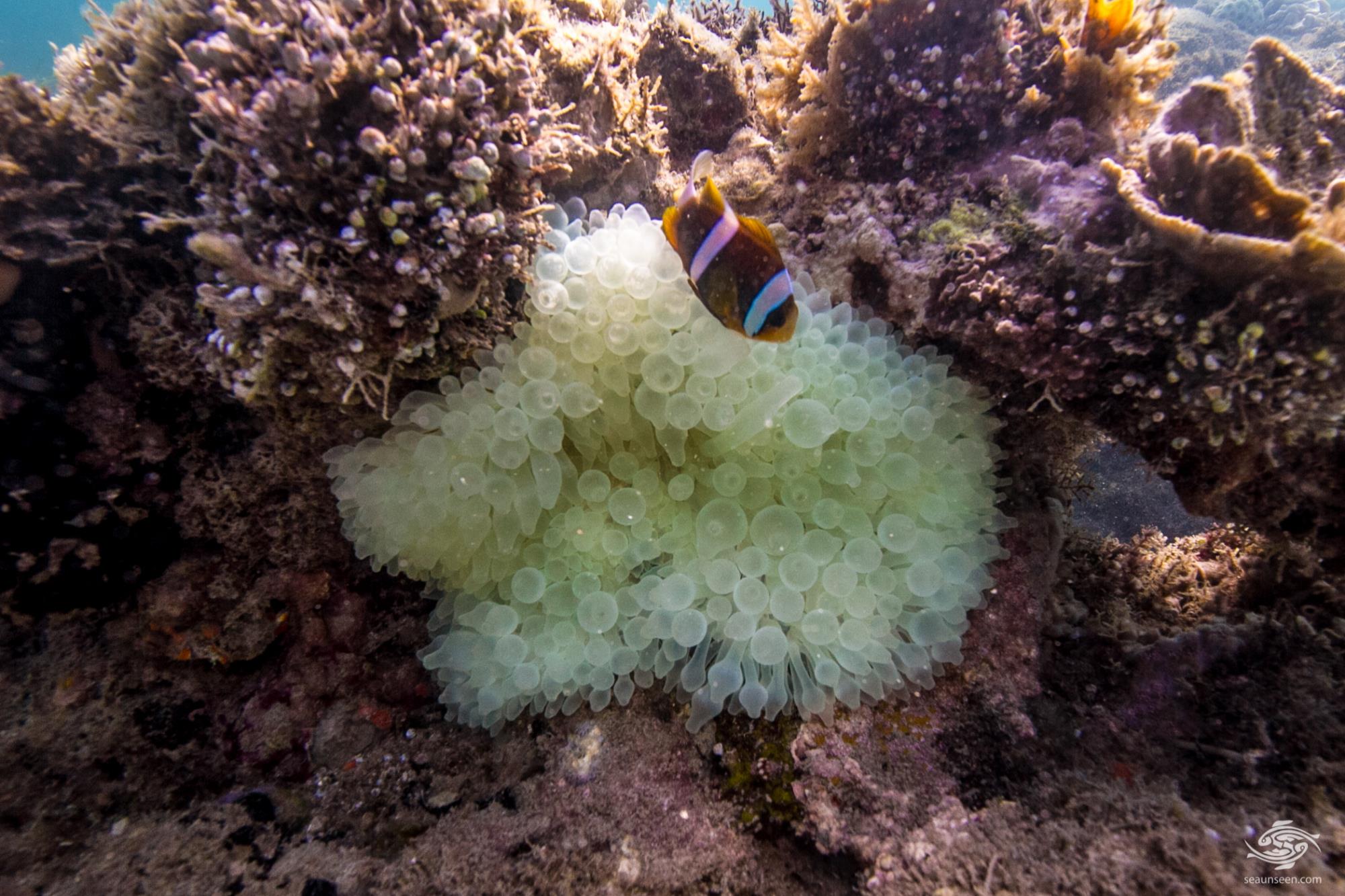 In the images below there is an image of a long tentacled bubble anemone which has also bleached which was some ten meters away from the one above.

BUBBLE-TIP ANEMONE IN THE WILD

The Bubble-tip Anemone generally is always anchored on a solid substrate and seems to prefer being on rocks or solid reef. Only on rare occasions does one find them in true rubble areas. They are more often in small holes or crevices on the reef.  On the Tanzanian coast we have seen them between one meter and forty meters although they are often more common in the one to five meter range.  They will often have clownfish in them and on the Tanzanian coast there are only two endemic species of clownfish. We have never seen the Skunk clown, Amphiprion akallopisos in them , but it is common to see  Allards Clownfish, Amphiprion Allardi in them as can be seen in the images. 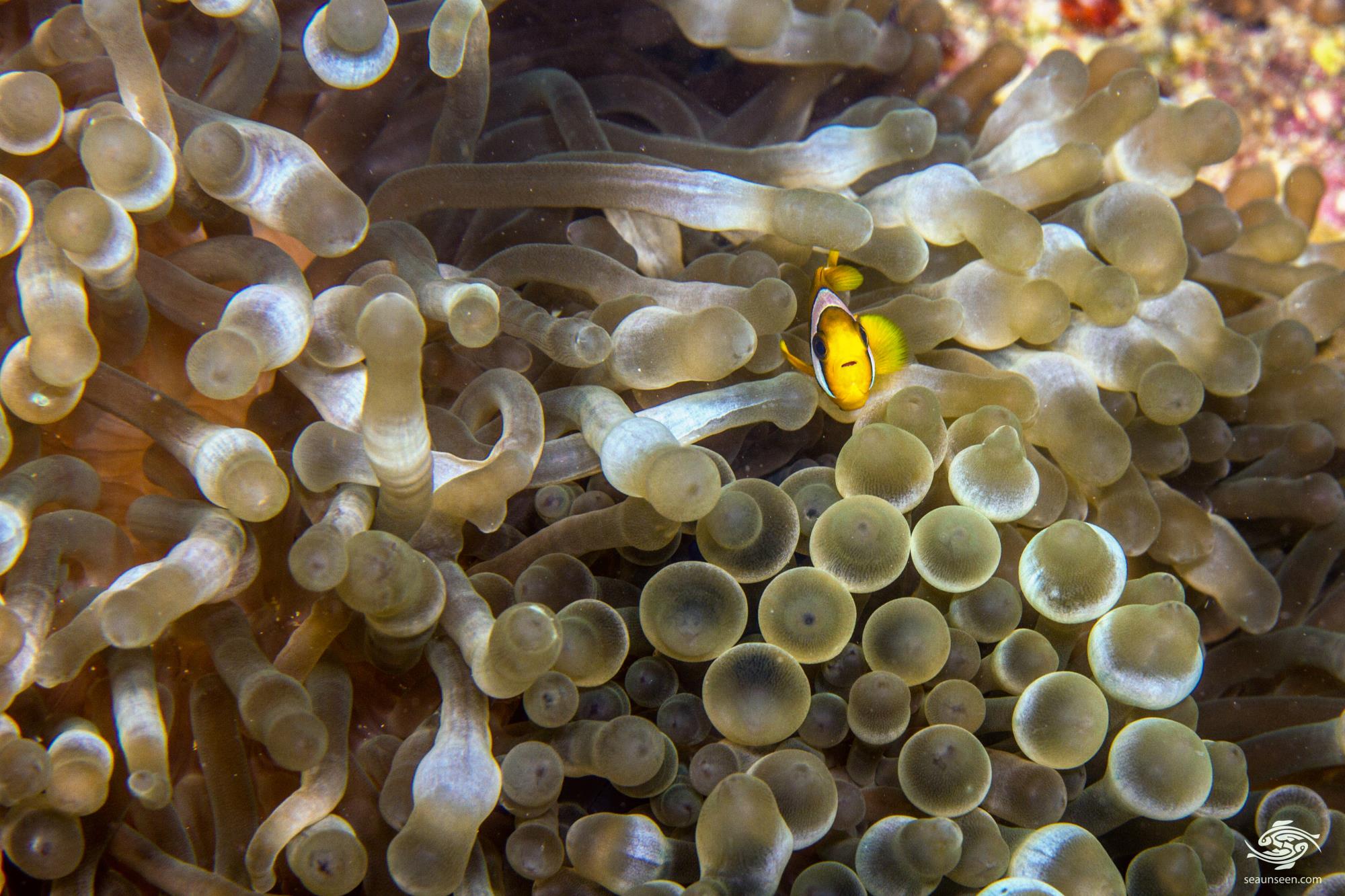 Other species associated with the Bubble-tip anemone are the Porcelain Anemone Crab  although these seem to prefer the carpet anemones and the Pacific Clown Anemone Shrimp. From a study done by Fautin, Guo and Hwang, it seems that the relationship between the anemone and the shrimp is anything but commensal.  The Squat Shrimp is also sometimes found in association with the Bubble-tip anemone.

On occasion one may see Domino Damselfish (Dascyllus trimaculatus)  in the Bubble-tip anemone, but this is fairly rare and they seem to prefer the Magnificent Anemone ( Which are more common ) 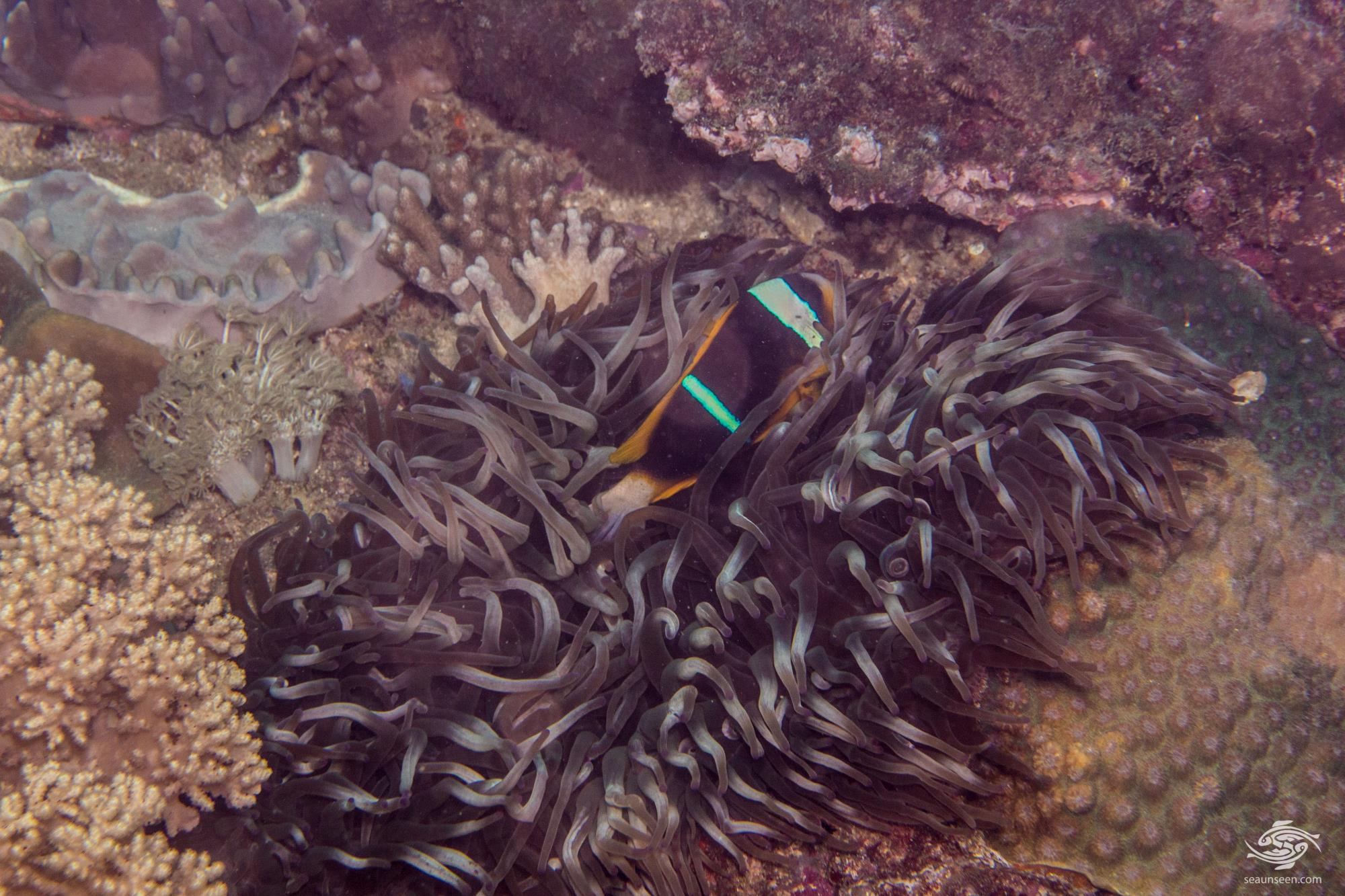 We have seen large groups of Magnificent Anemones relocating from one area to another by releasing from the bottom and rolling into a ball and moving along the bottom with the tide. Only on one occasion have we seen a Bubble-tip anemone doing this as is pictured below. 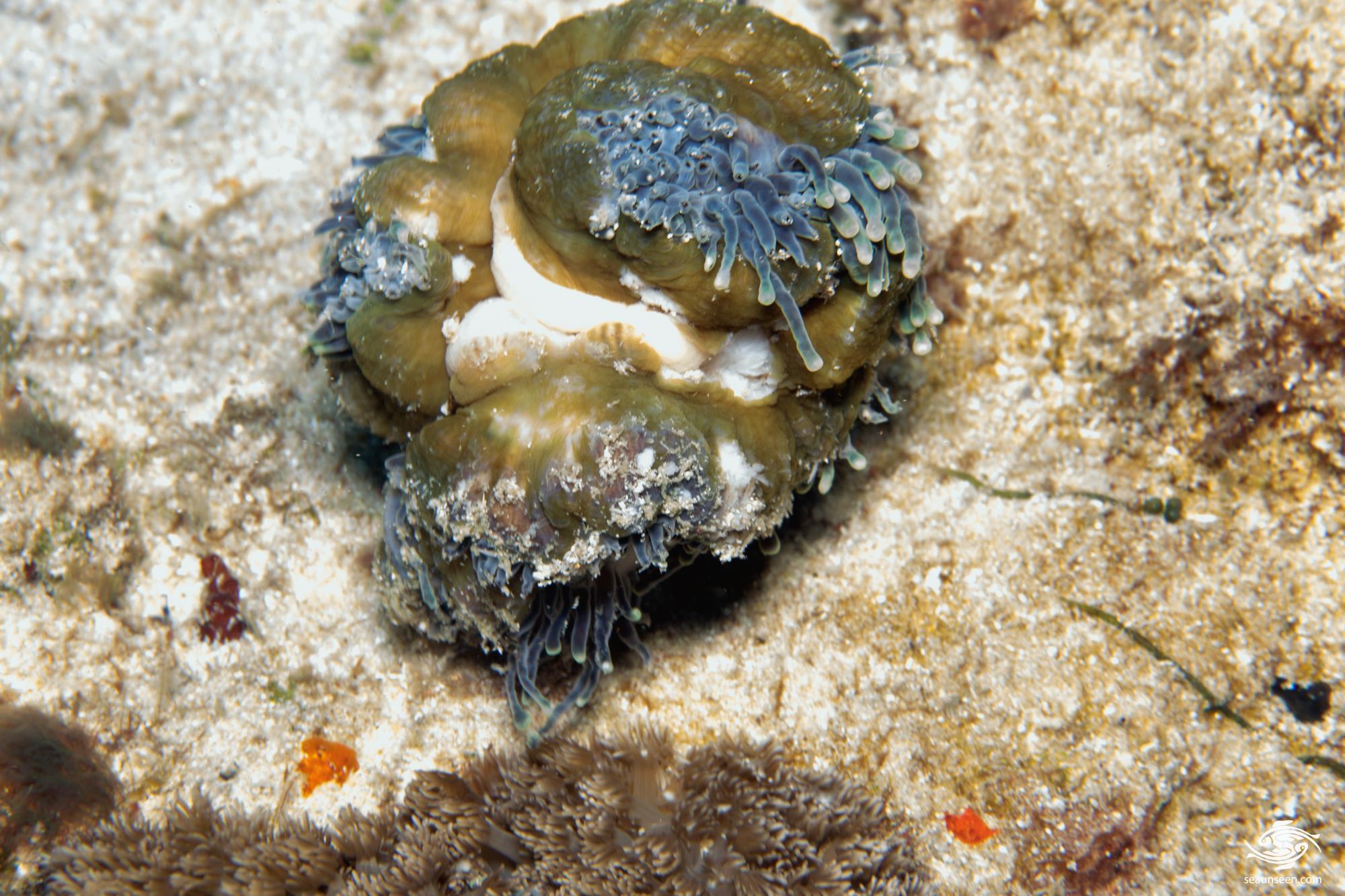 The Bubble-tip anemone is widespread throughout the tropical and subtropical waters of the Indo Pacific, from the east coasts of Africa to the Red sea, Across to Japan and south to Australia. 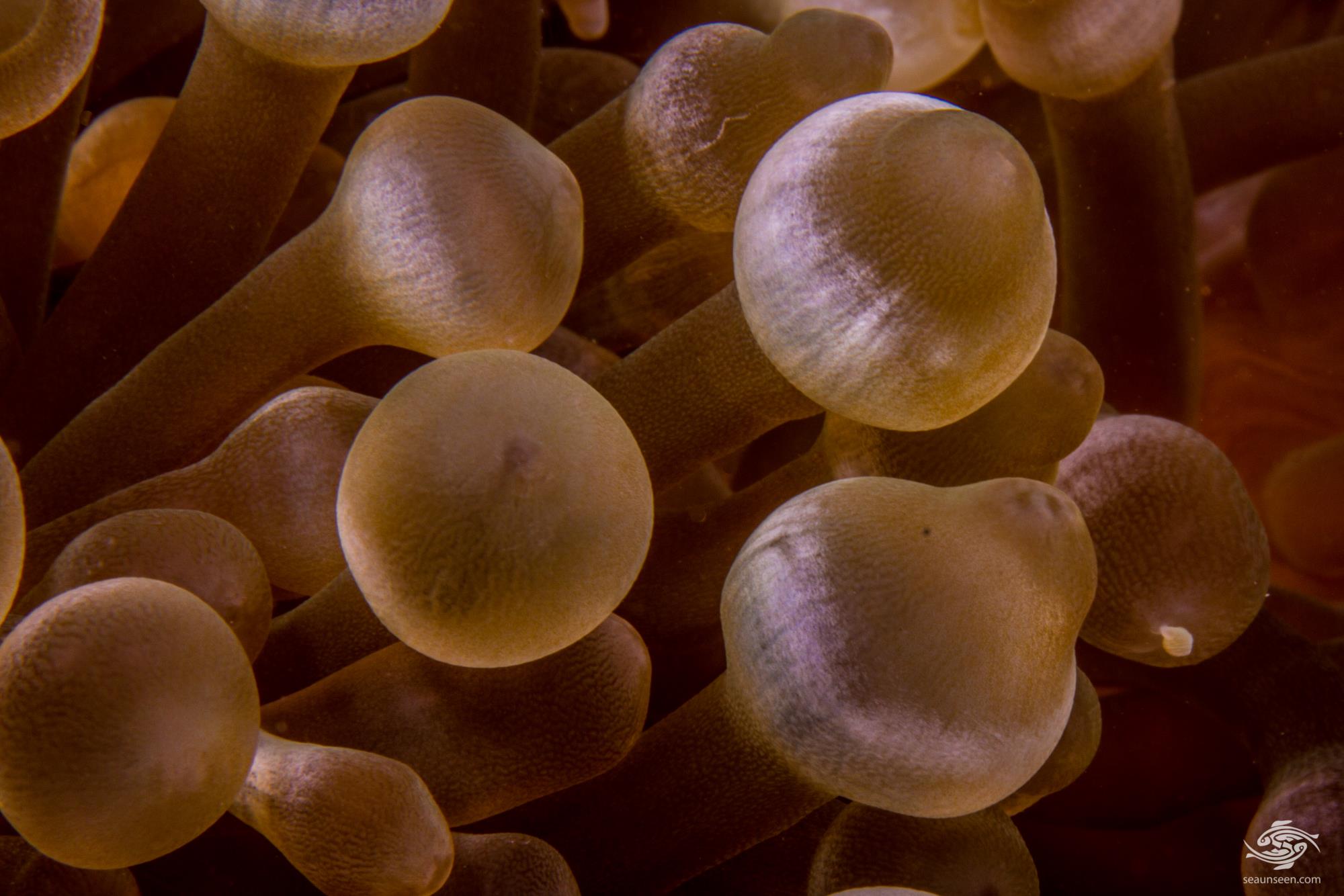 As with other anemones the Bubble-tip anemone forms symbiotic relationships with single celled algae. The anemone benefits from the algae’s photosynthesis, namely oxygen and food in the form of glycerol, glucose and alanine. The algae in turn obtain protection against herbivores from the anemones stinging cells and good exposure to light. 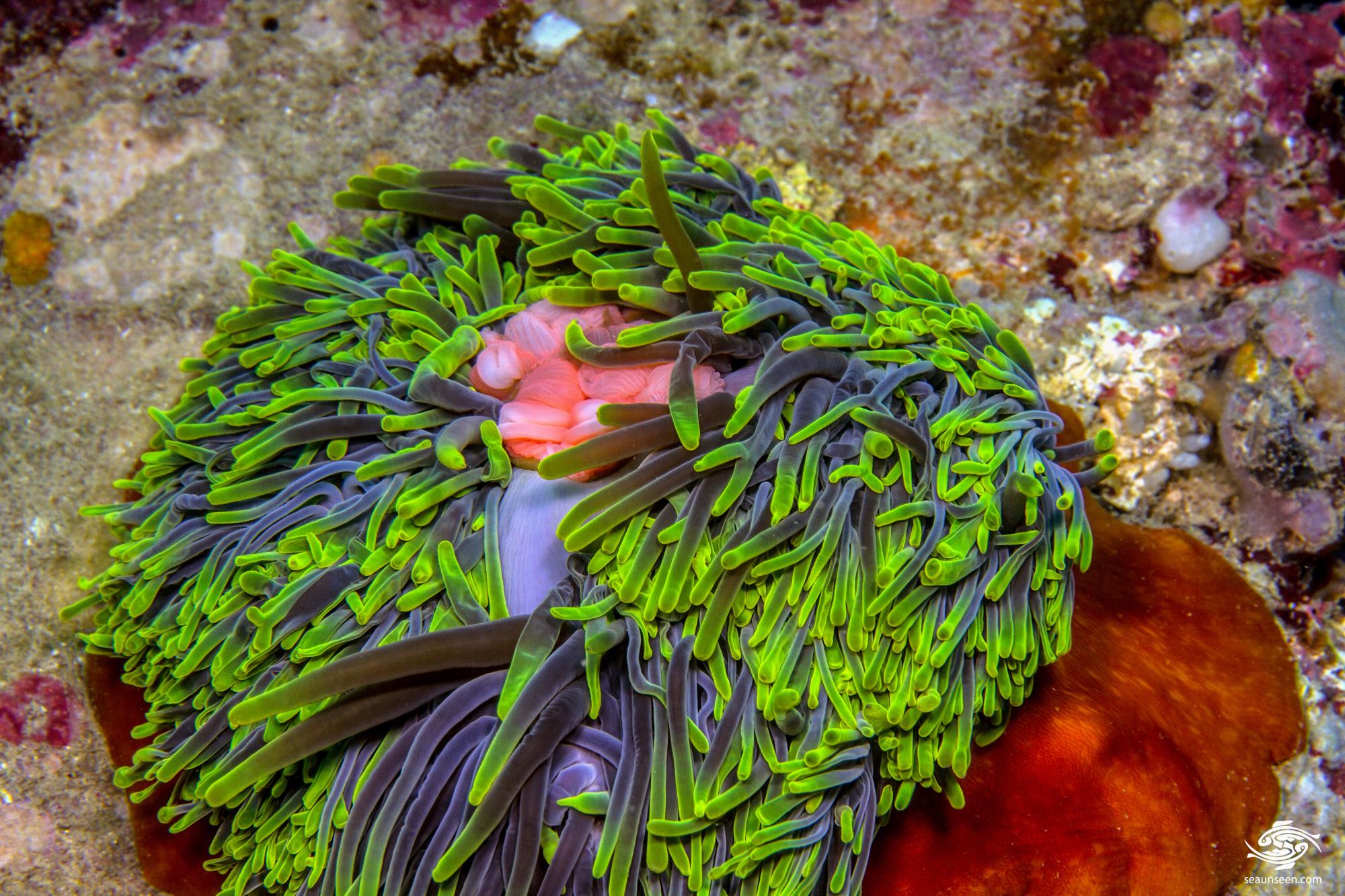 They also use their venomous cells or nematocysts in the tentacles to sting and capture prey such as small fish and planktonic matter with planktonic matter probably making up the bulk of this section of the diet. Additionally  they obtain some nutrition from a commensal relationship with clown fish which sometimes reside in the anemones tentacles. Prey that is captured is moved into the stomach by the tentacles.  On rare occasions as in the image above one will see a specimen with its stomach distended. 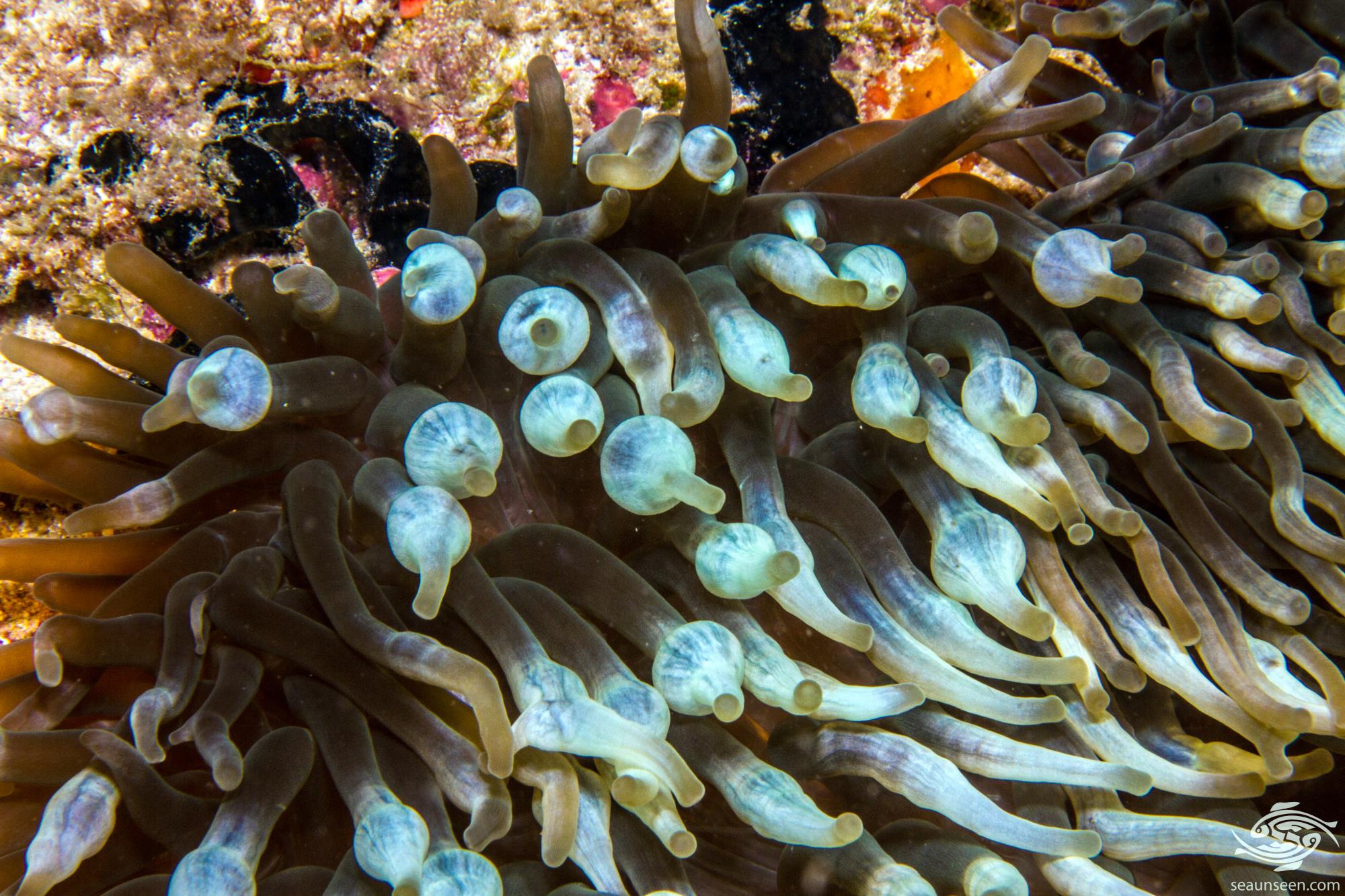 The Bubble-tip anemone can reproduce asexually by budding or splitting and by sexual reproduction. Although budding seems to occur very frequently in aquariums, one almost never sees it in the wild. In sexual reproduction males release sperm into the water, which stimulates females to release eggs into the water.  They eject eggs and sperm through their mouths.

Fertilization occurs when the two meet and the fertilized eggs then develop into planula’s which settle and grow into a single polyp. This spawning seems to occur in summer and autumn according to a study done in Australia and occurs on a synchronous basis on a few nights a year. The males begin the spawning and this initiates the females to spawn.  This process is known as bulk spawning. Interestingly the eggs contain zooxanthella indicating a vertical transmission of the symbionts.

In Dar es Salaam in Tanzania in 2005 on the south end of Bongoyo reef a large conglomeration of these anemones developed.  In an area of reef some 50 meters wide by 200 meters long there were several hundred of the BTA’s. The sizes and the colors varied greatly and most exhibited bubbles.  They were in this location for approximately 18 months and then disappeared overnight. 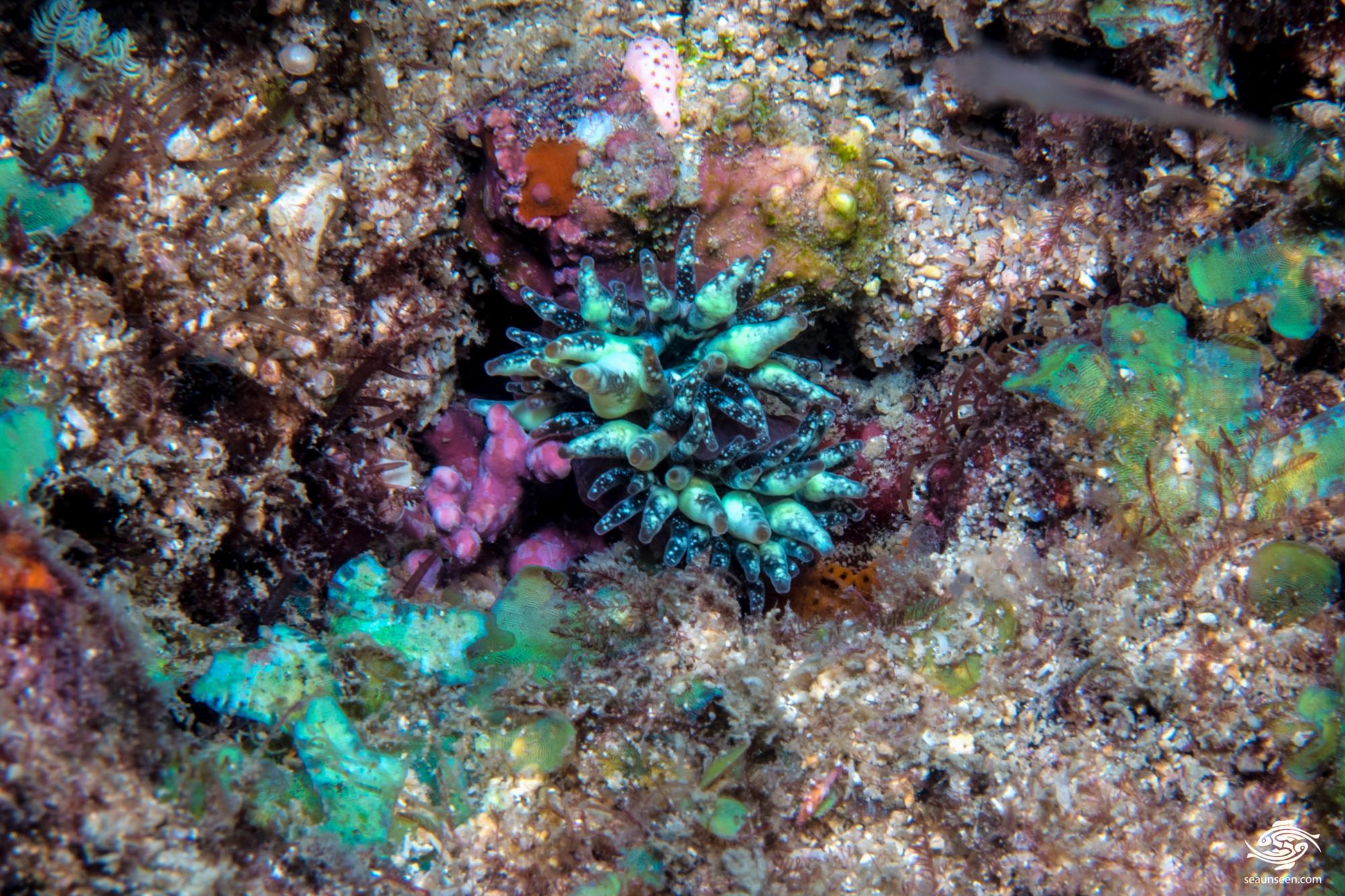 Bubble-tip anemone are very popular in the aquarium trade and seem to do well in tanks that are well run. They are a bit fussy on water quality and are probably not for the beginner. There is a very good article on keeping them in tanks here. The Bubble tip anemone which is captive bred is probably what most people should be looking at because it is easy to keep and usually is aesthetically the best looking,

Many unscrupulous dealers dye anemones before putting them out into the market and any unusually brightly colored anemone should be avoided.

Living in the shallows and the warmer section of the water table, the BTA is close to the edge of its upper temperature limit. When exposed to elevated temperatures they expel the zooxanthellae as seen in the image below and higher up in the post.  Diving in the same area some six months later all the anemones in the area seemed to have recovered.  The soft coral population however did not survive the bleaching. 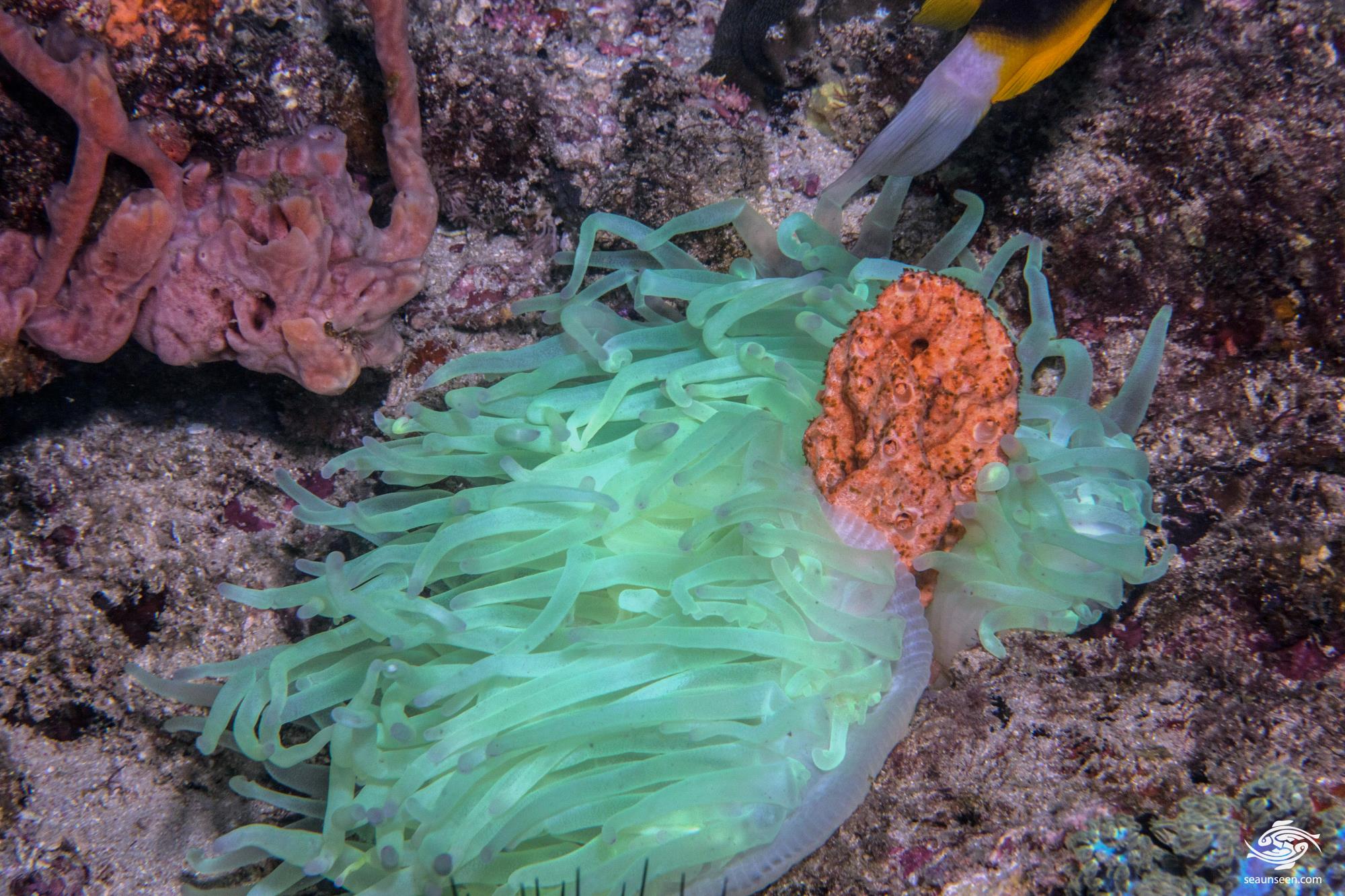 Costs and benefits of the symbiosis between the anemoneshrimp Periclimenes brevicarpalis and its host Entacmaea quadricolor
Fautin DG, Guo CC, Hwang JS