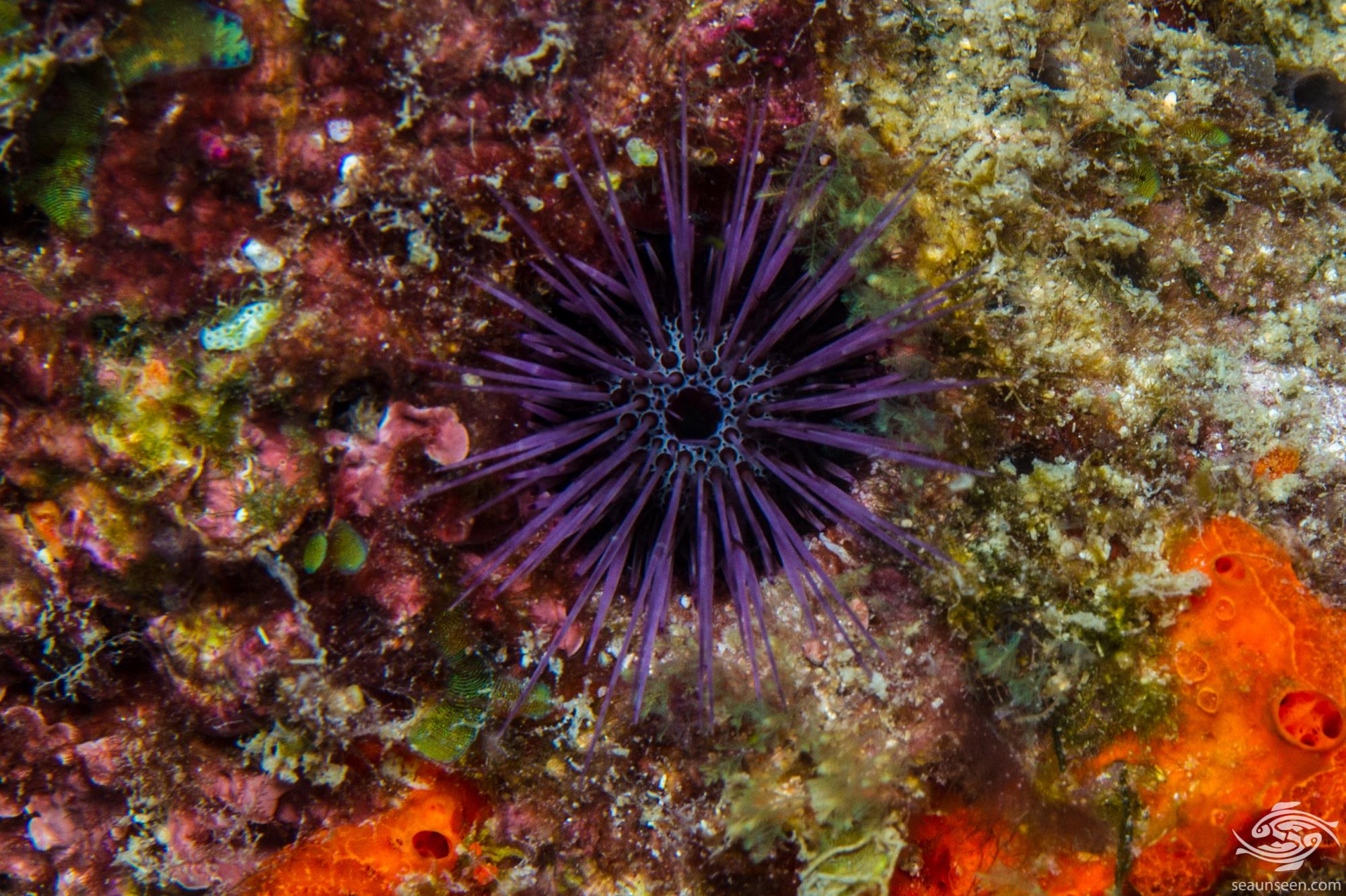 The Burrowing Fine Spine Sea Urchin (Echinostrephus molaris) is also known as the Boring Urchin. As can be seen in the images they burrow or bore a hole into the reef, usually but not always into Porites coral in Tanzania. This species spend most if not all of their adult lives in the hole . They were first described in Sri Lanka by Döderlein in 1888.

The Burrowing Fine Spine Sea Urchin is one of the smaller urchins and given that they are always in a hole they are easy to identify. The spines are usually purple in Tanzanian waters. The spines pointing upwards are longer and more slender than those on the sides. The longer spines are used for feeding and protection and the shorter spines are used to wedge into the burrow. They grow up to 3 to 4 cm in width. 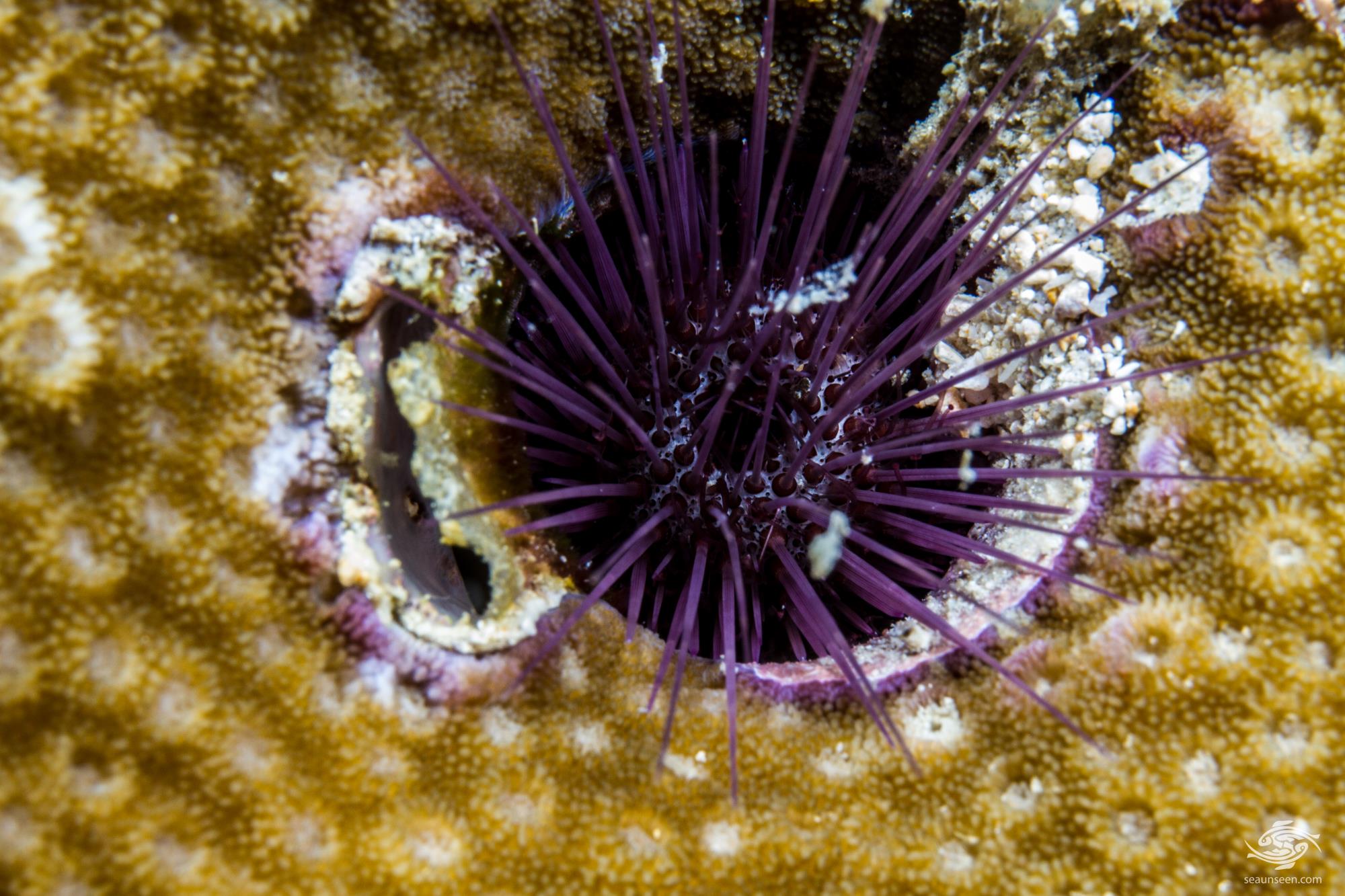 Burrowing Fine Spine Sea Urchin are fairly common in Tanzania on the shallower reefs with lots of current.  They are usually seen on reefs from ten to fourteen meters in depth but one can see them just below the tidemark close inshore. At night they seem to come part out their burrows to increase the height of their spines above the coral to assist in feeding.  The juveniles bore their way into the coral or rock and the hole is enlarged as the urchin grows. If the burrowing urchin population becomes too great then substantial damage can result to reefs. This is often caused by removal of their predators such as large wrasse and triggerfish. They are capable of boring into corals and softer rocks such as limestone or sandstone. 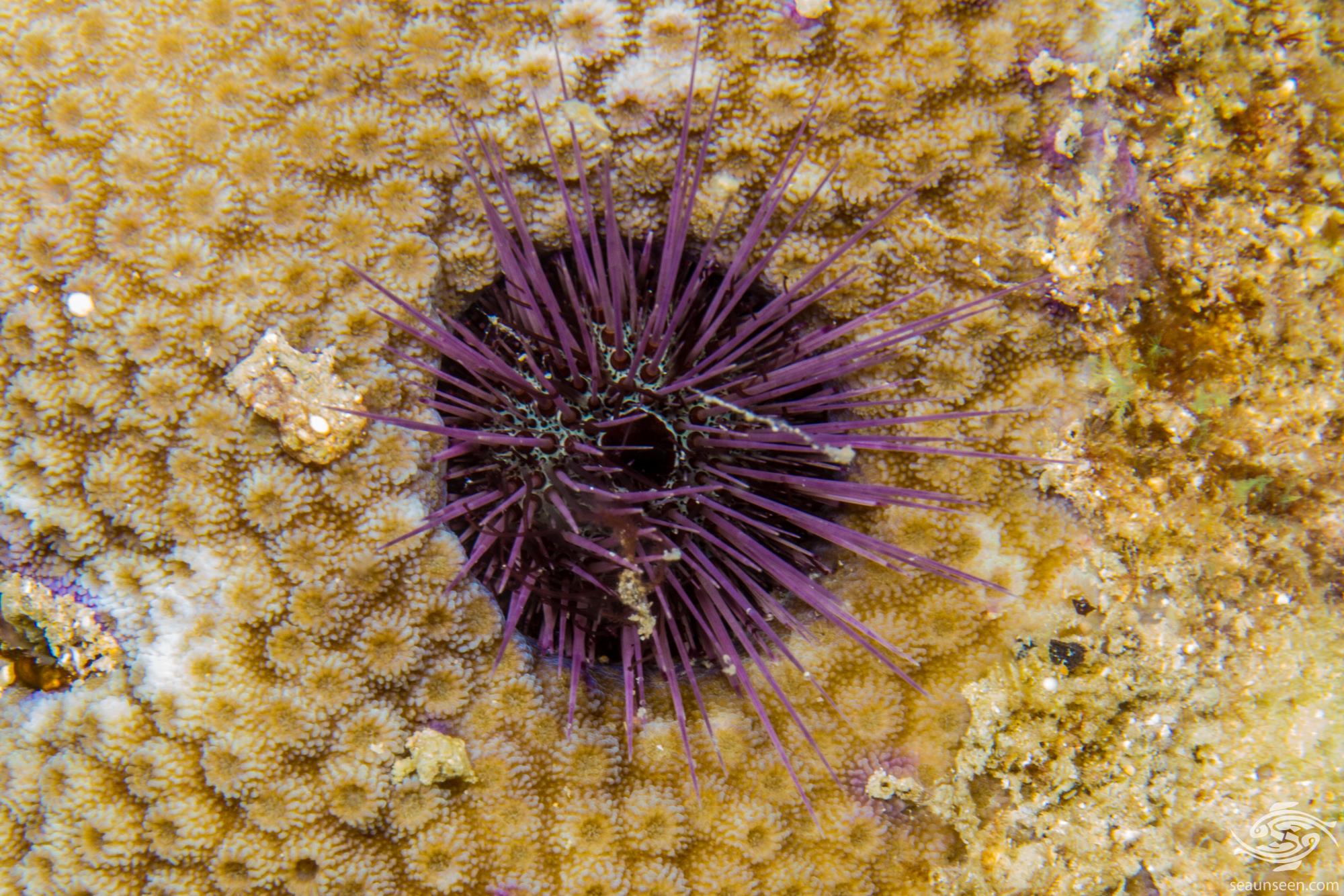 The Burrowing Fine Spine Sea Urchin is found across the Indo West Pacific area from Africa across to the Pacific Islands including Hawaii. Being effectively filter feeders, they prefer areas with high current as this substantially increases the odds of trapping food.

The Burrowing Fine Spine Sea Urchin uses its spines to trap passing pieces of algae.  The spines are capable of sensing a piece of algae touching them and the other spines then trap it in chopstick style fashion. The algae is then passed back down to the mouth using the spines and tubular feet.  They are in turn preyed on by Triggerfish and larger Wrasse that are capable of biting the spines off and then turning them upside down to snack on. 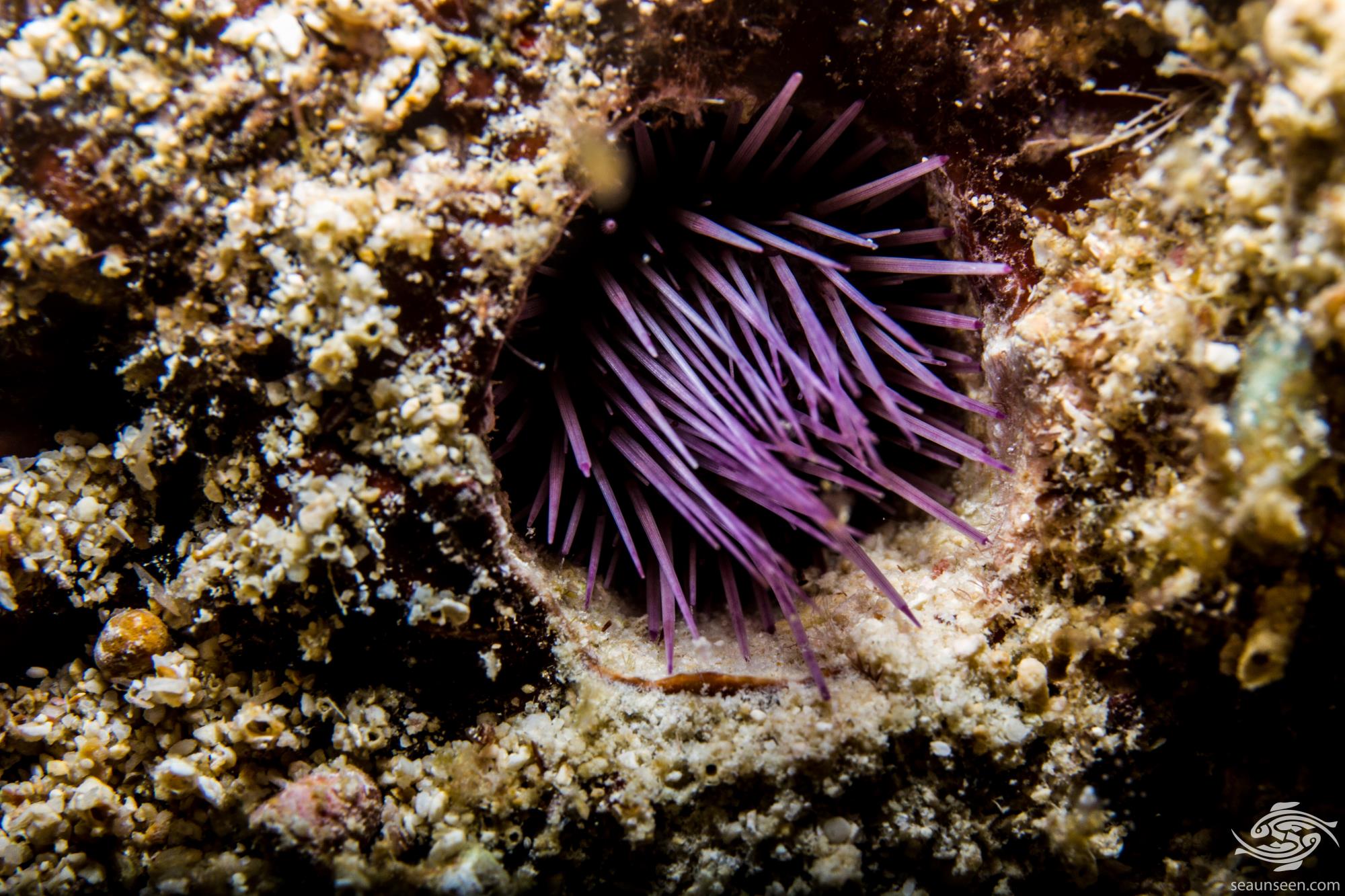 They are gonochoric being either male or female and spawn is given off by the males in large numbers, fertilizing the eggs of any female in the area. The eggs remain planktonic and after some development settle onto a suitable coral substrate which they burrow into. 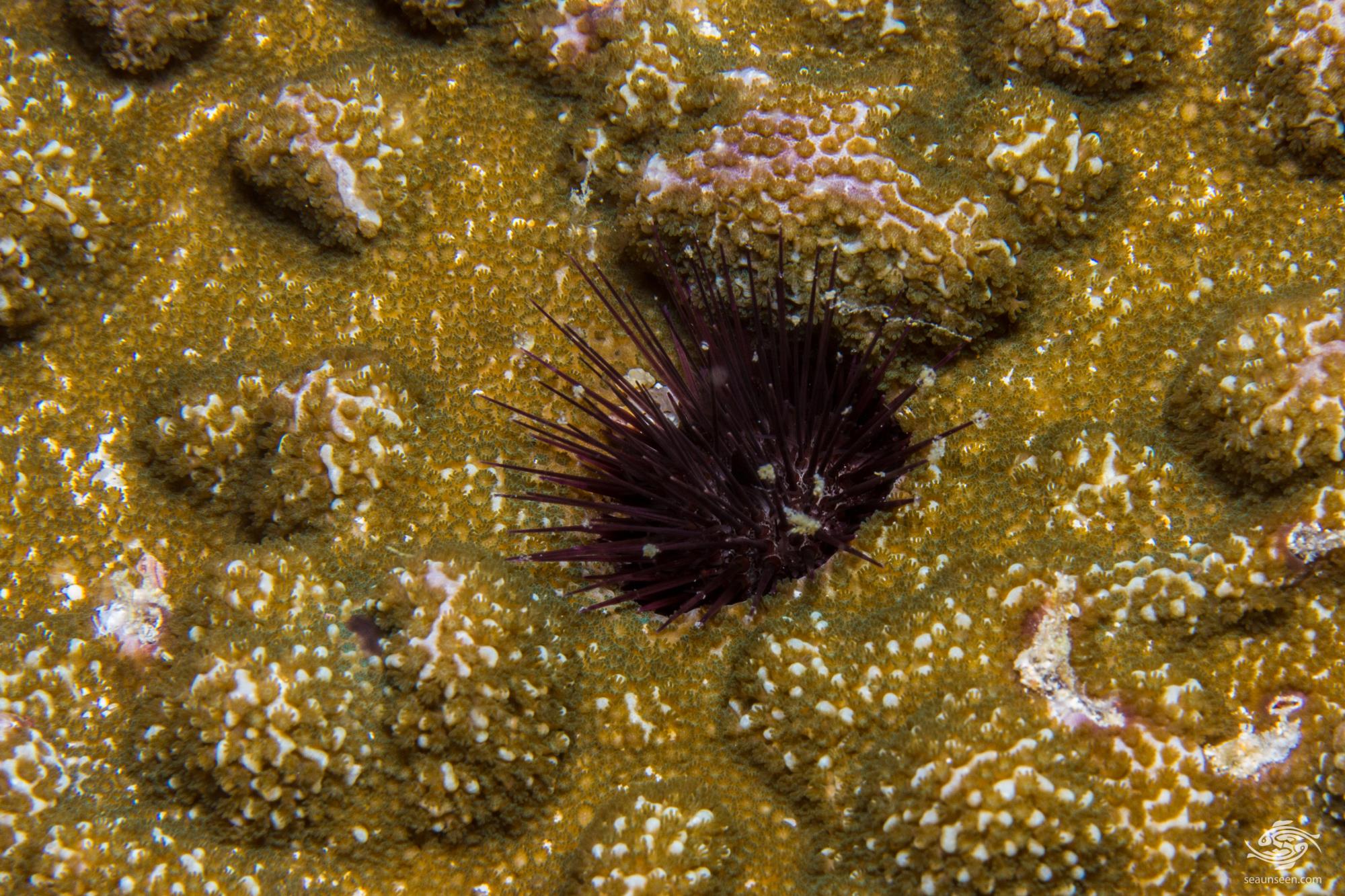