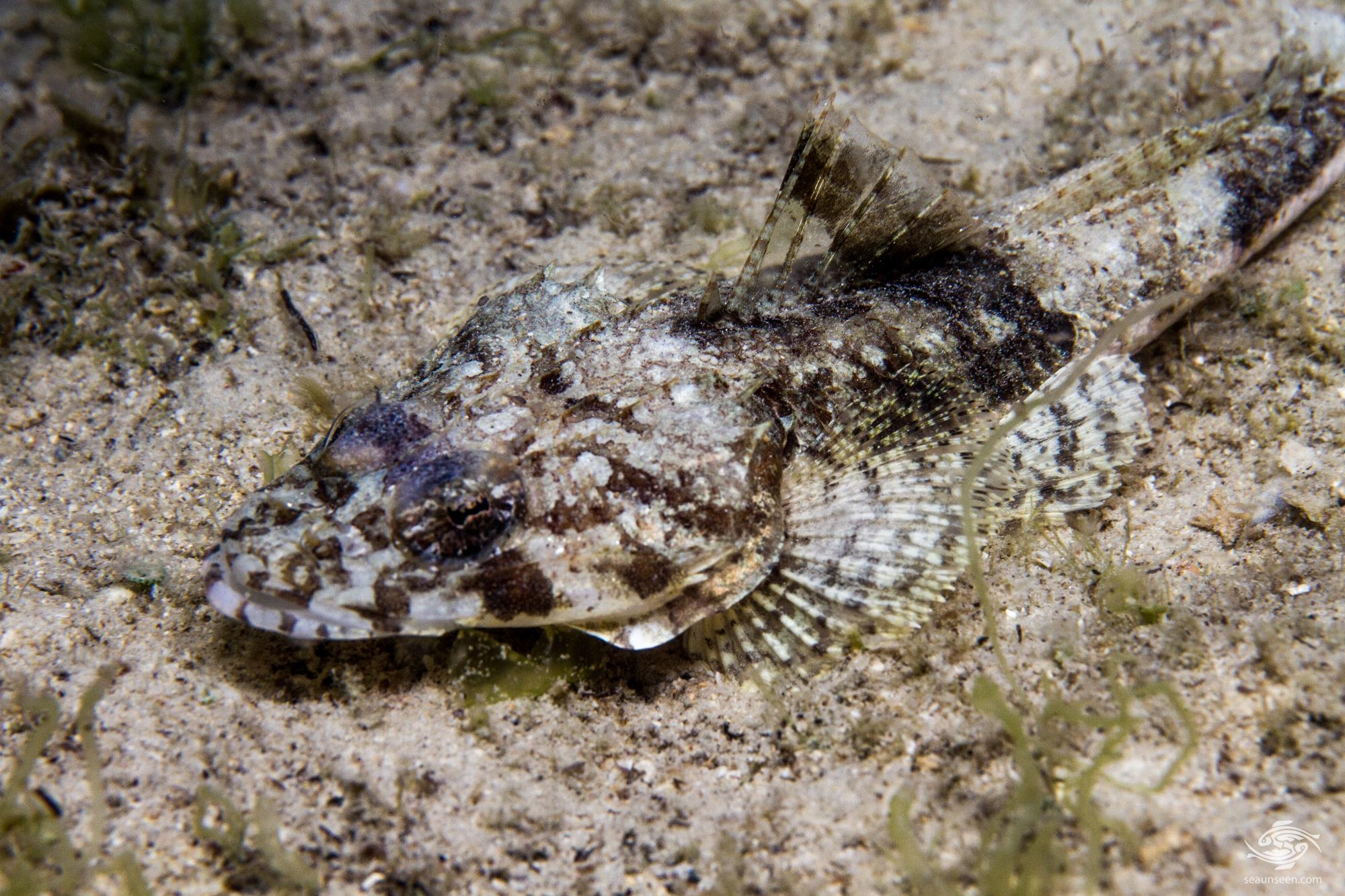 The Celebes flathead (Thysanophrys celebica) is also known as the Quarterspined Flathead , the Manado Flathead and the Sulawesi Flathead. They were were first described by Bleeker in 1855.  The are fairly common in the shallows in Tanzanian waters. 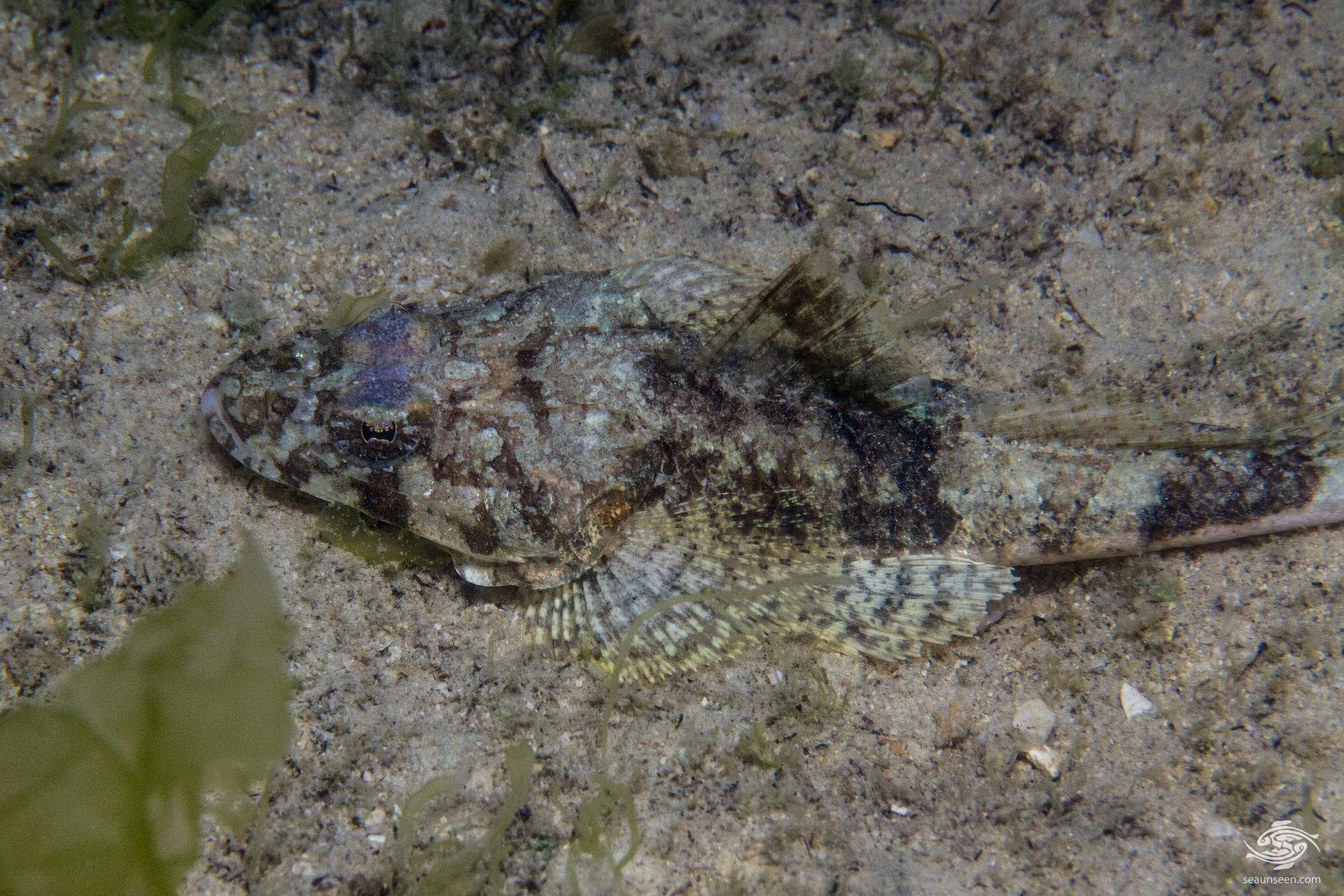 The Celebes Flathead has a typical dorso-ventrally flattened body common with all the flatheads and is slightly thicker in the area around the rear of the jaw on a proportional basis than the other smaller flatheads. The head is flat and tapers down to a narrow tail.  The upper body is a fairly lightly colored mottled beige and darker brown color.  The area around the dorsal fin is a darker  brown color and there are a further two indistinct darker bars on the rear of the body.

There is an indistinct dark brown stripe across the eyes extending to the jaws.  The eyes are set on the sides of the head and are quite close together.  The eyes have a small lappet on the on the upper iris with few tendrils and there are a series of narrow brown bars on the lip of the lower jaw.The pectoral fins are which are spread to the side when it is sitting on the bottom and have a series of light and dark bands on them. They grow up to approximately 20 centimeters. 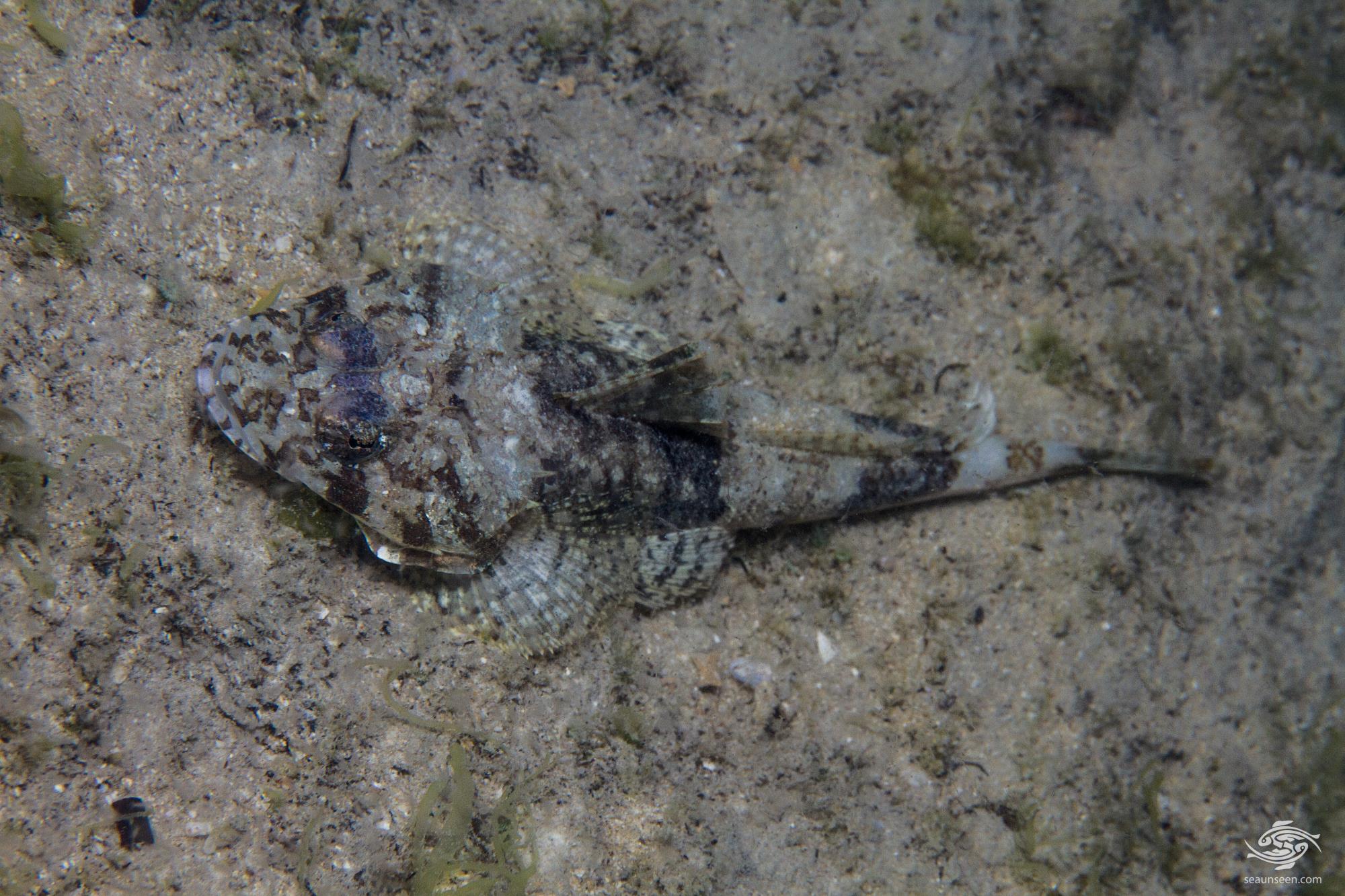 CELEBES FLATHEAD IN THE WILD

During the day we often see the Celebes Flathead semi buried in the sand, but at night they are more commonly seen in the open on the edges of grass beds that adjoin rubble. This may indicate that they are nocturnal feeders. Being ambush predators they sit and wait for their prey to come to them. When approached by a diver they sometimes raise their dorsal fin. Generally they will not move and one can inspect them quite closely. 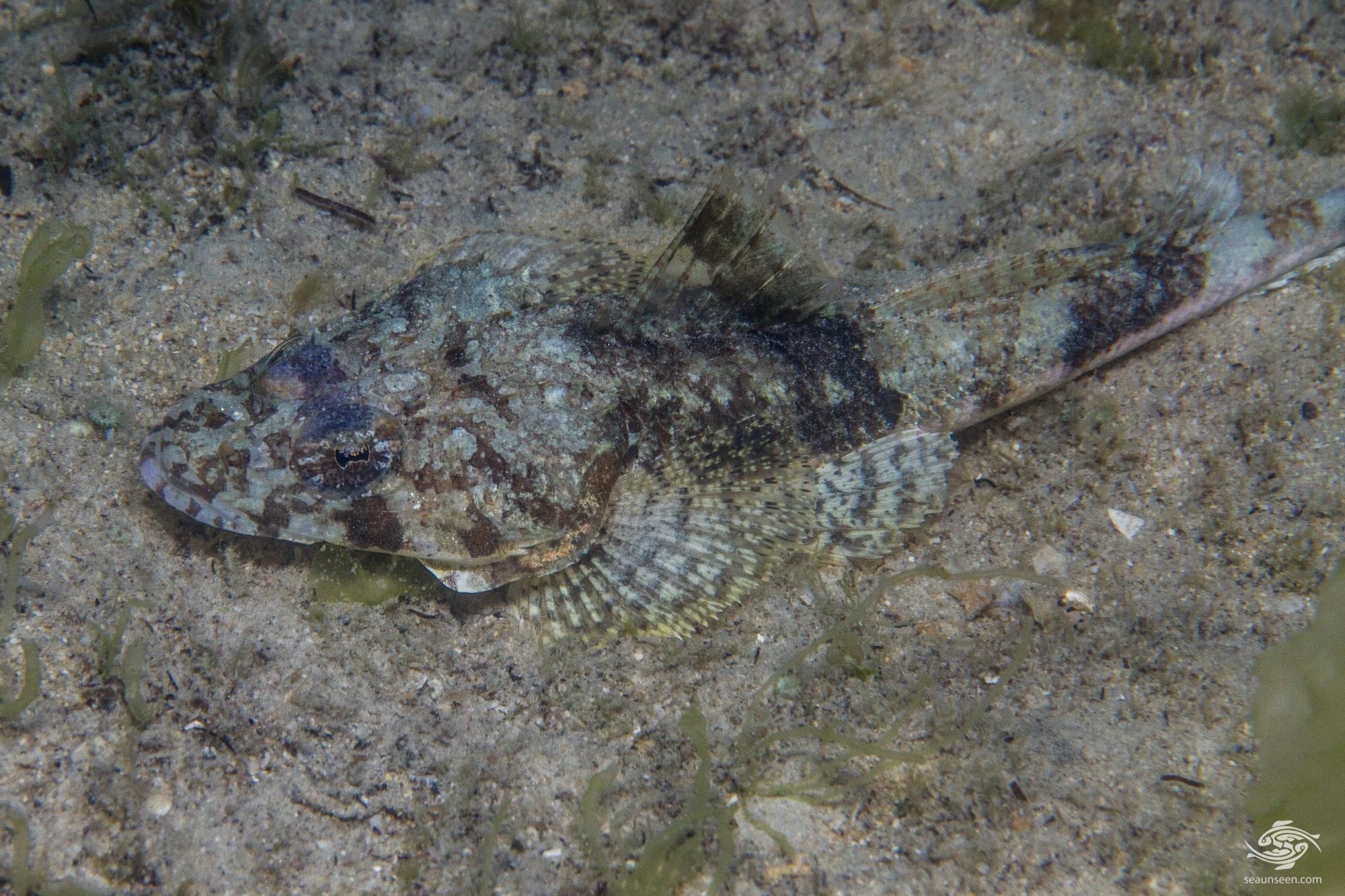 The Celebes Flathead is found across the Indo-West Pacific area from South Africa up the East Coast to the Persian Gulf across to southern India, Sri Lanka, the Gulf of Thailand, Hong Kong, Taiwan, the Philippines, Celebes, northern Queensland, and the the Solomon Islands. Their depth range is reportedly between 1 meter down to 43 meters but we usually see them in the 3 to 5 meter range. 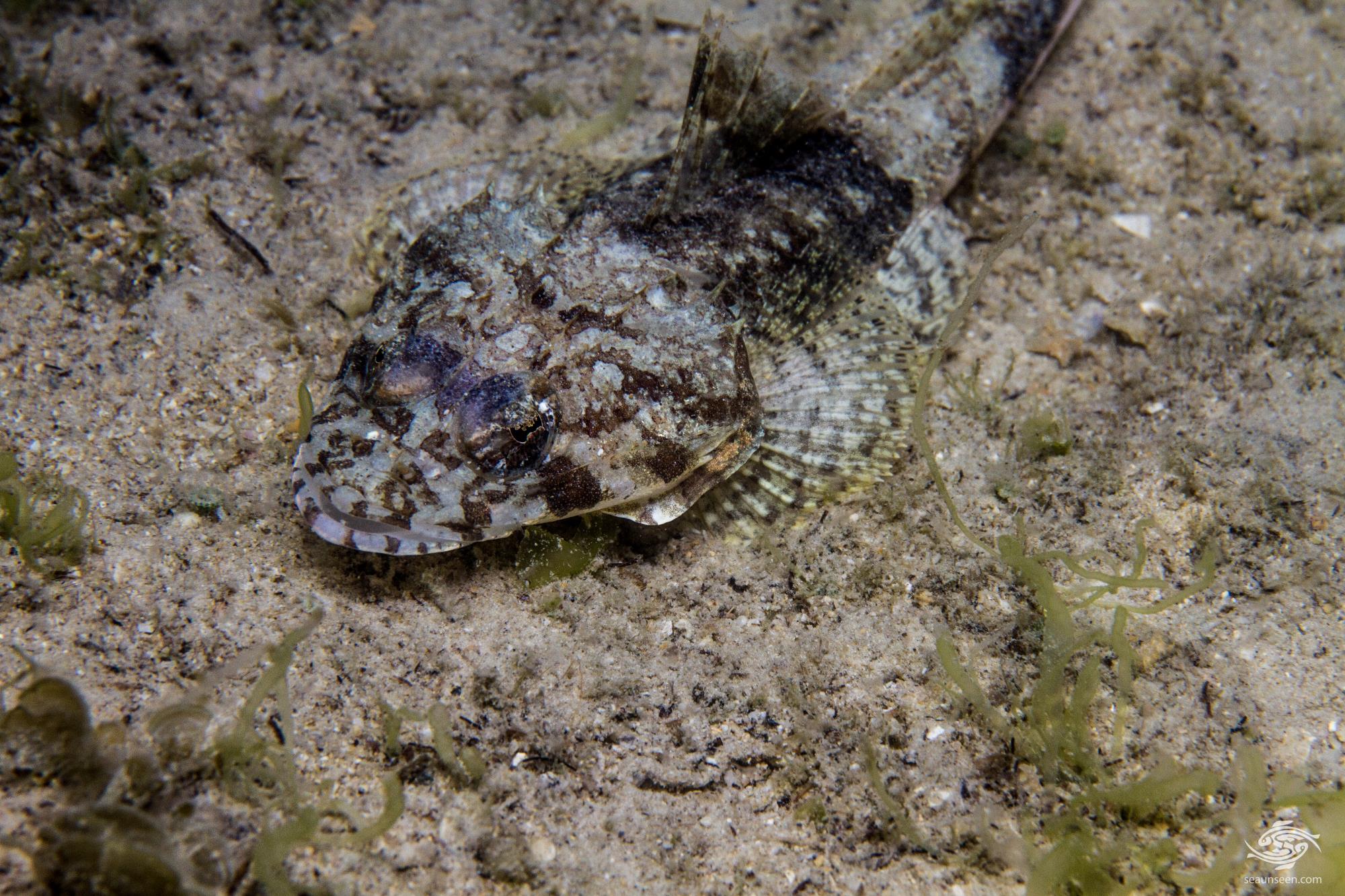 Celebes Flathead probably eat almost anything that will fit into their mouths and to some extent their diet may be dictated by whatever swims past. Any small fish, squid or crustacean unlucky enough to swim within proximity of their jaws will probably end up in them.

In a study by Tomoki Sunobe, Sachiko Sakaida & Tetsuo Kuwamura it was found that females were often slightly larger than males and that Protandrous sex change occurred with males at around two years  even if there were larger females around. This indicates that social cues were not involved in the change. Mating between pairs was a temporary bond and occurred at night during summer. 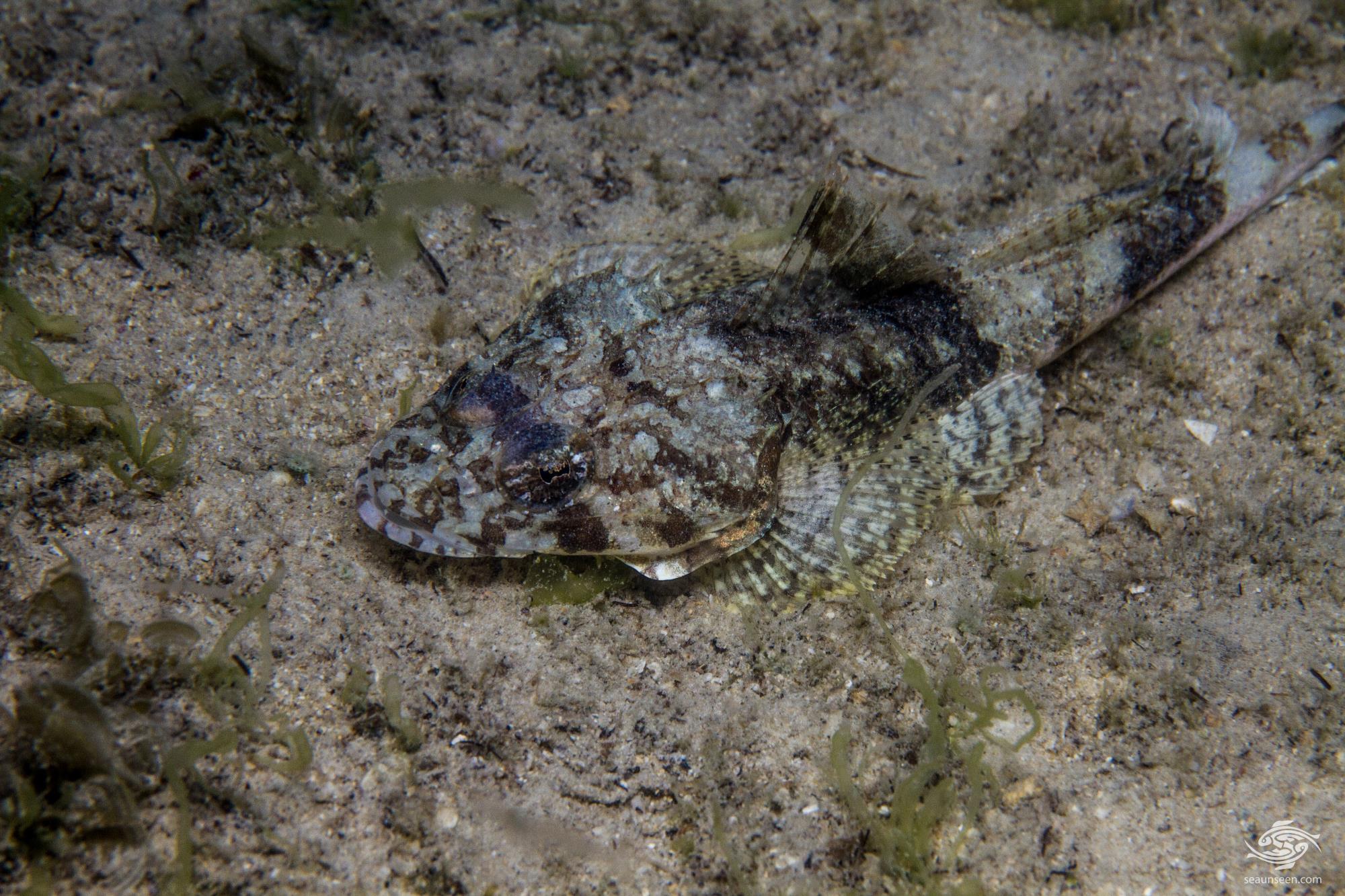 Some aquarists keep Flatheads as specialty items but generally only the large commercial aquariums will keep them and they require a large tank and prefer live food.