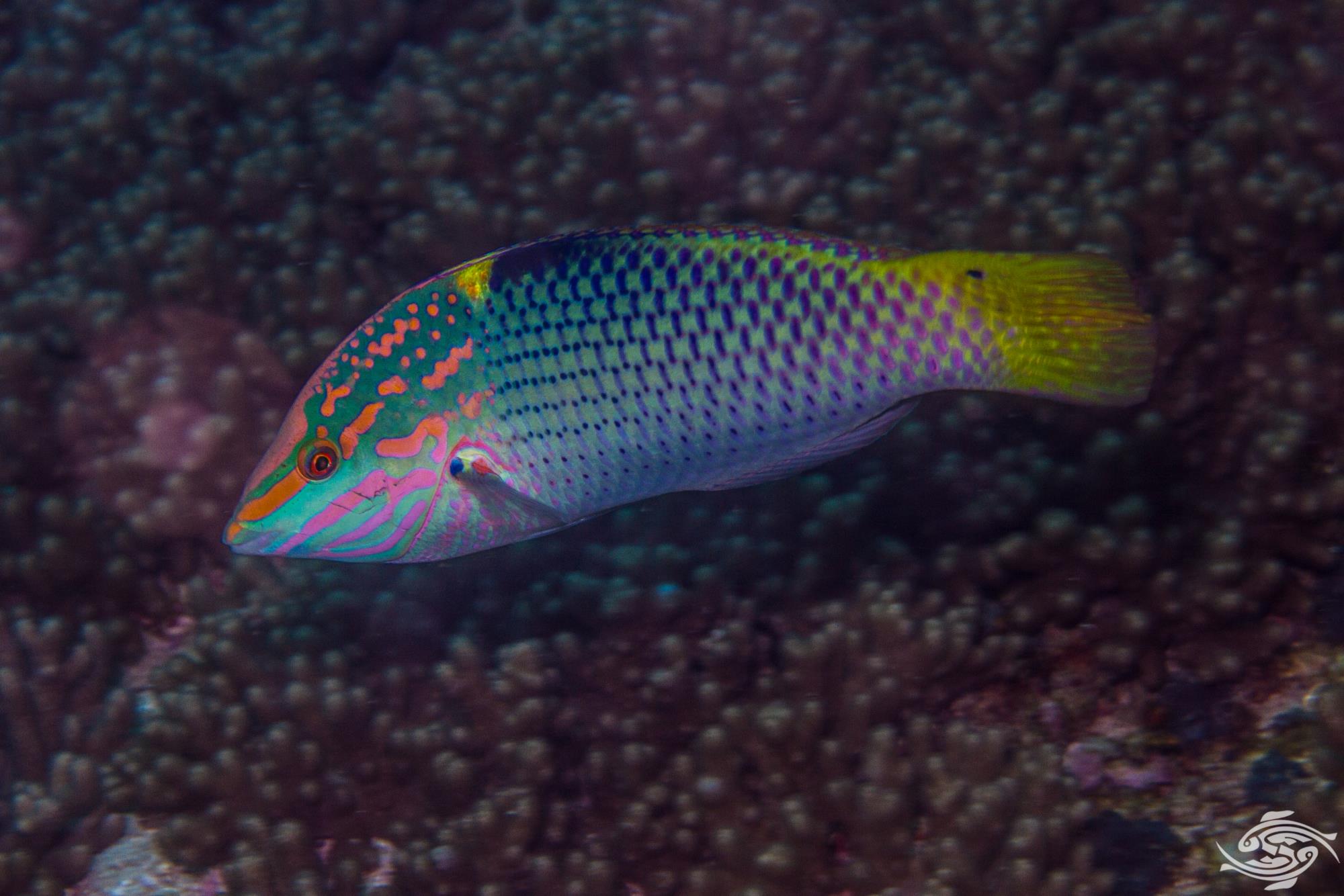 The Checkerboard wrasse (Halichoeres hortulanus) is also known as the Marble wrasse or Hortulanus wrasse. They are very common in Tanzanian waters. As with other members of the halichoeres family, they undergo a fairly dramatic transformation in colouring as they age. They are also able to change sex during their lifetime. They are all born as females and dependant on social cues are able to change into males. Usually in any given area there are numerous females and a single male. If the male disappears for any reason the largest female in the area will usually change into a male. 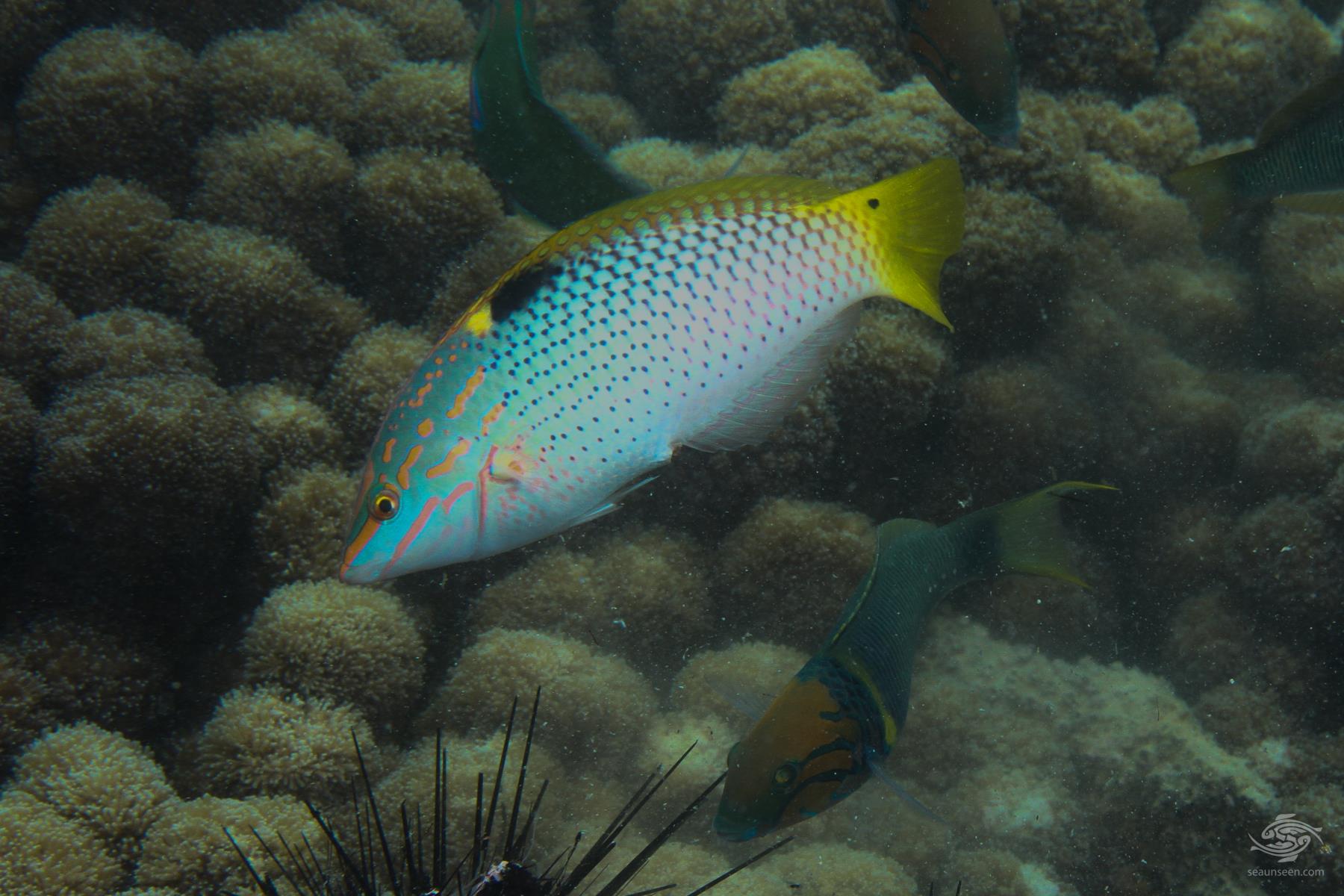 In the wild in Tanzania they are active free swimming fishes, mainly tending to be solitary. Usually they are always on the move. Seldom do they stop for more than a split second, usually to take a bite of some tasty morsel. They are powerful and manoeuvrable swimmers  and cruise around the reef at some speed searching for food.

They are found from 1 meter to twenty meters in depth although the juveniles are commonly found in shallow water on the reef top, particularly in areas with scattered sand. The checkerboard wrasse is found in the tropical waters of the Indo Pacific from the East African coast eastwards through the Red Sea, South East Asia down to Australia north to Japan and east to the Tuamoto Islands. 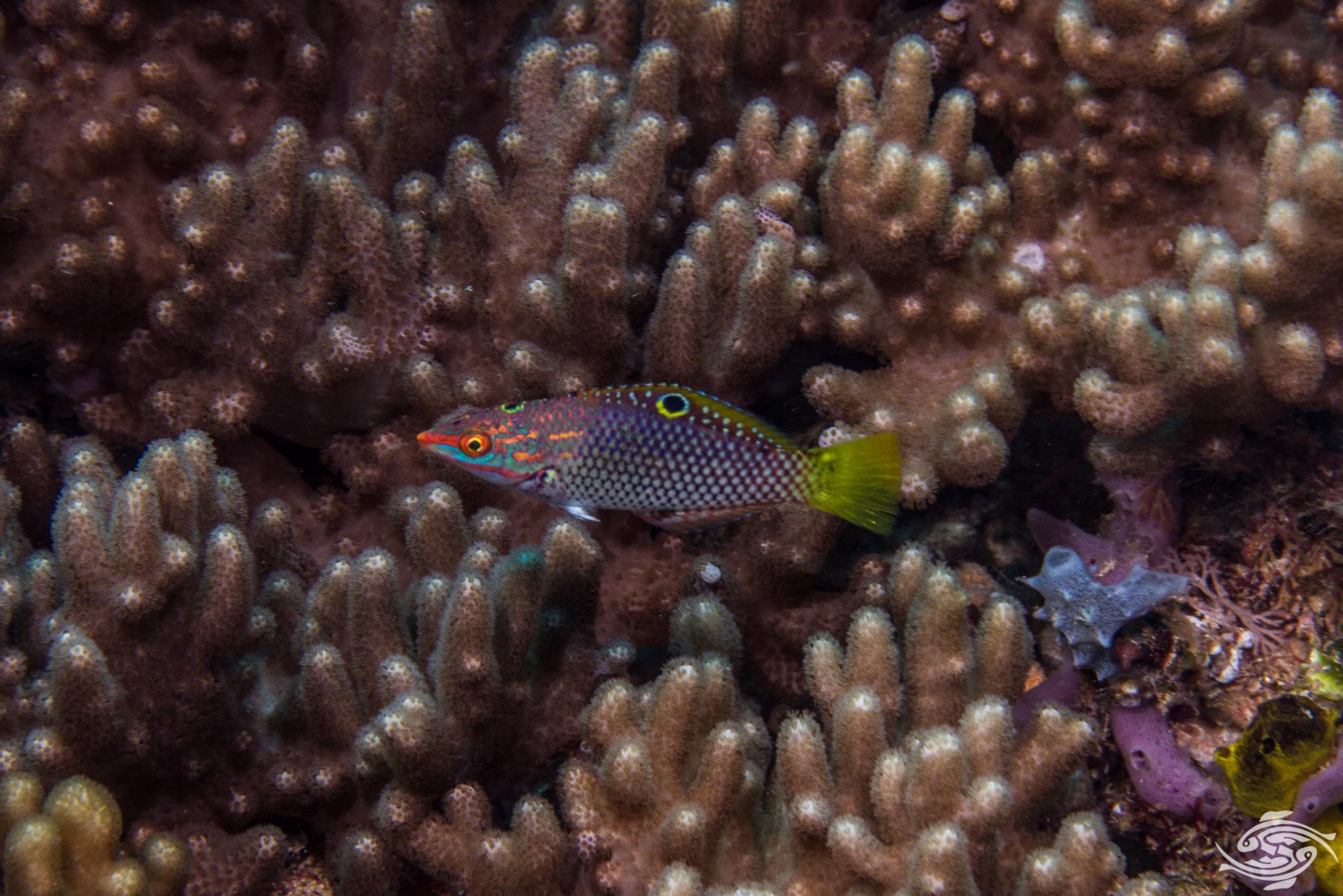 They are carnivorous and in the wild their diet is small fishes, free swimming organisms, worms living in the sand and on rocks as well as any hard shell invertebrates that fit its mouth. 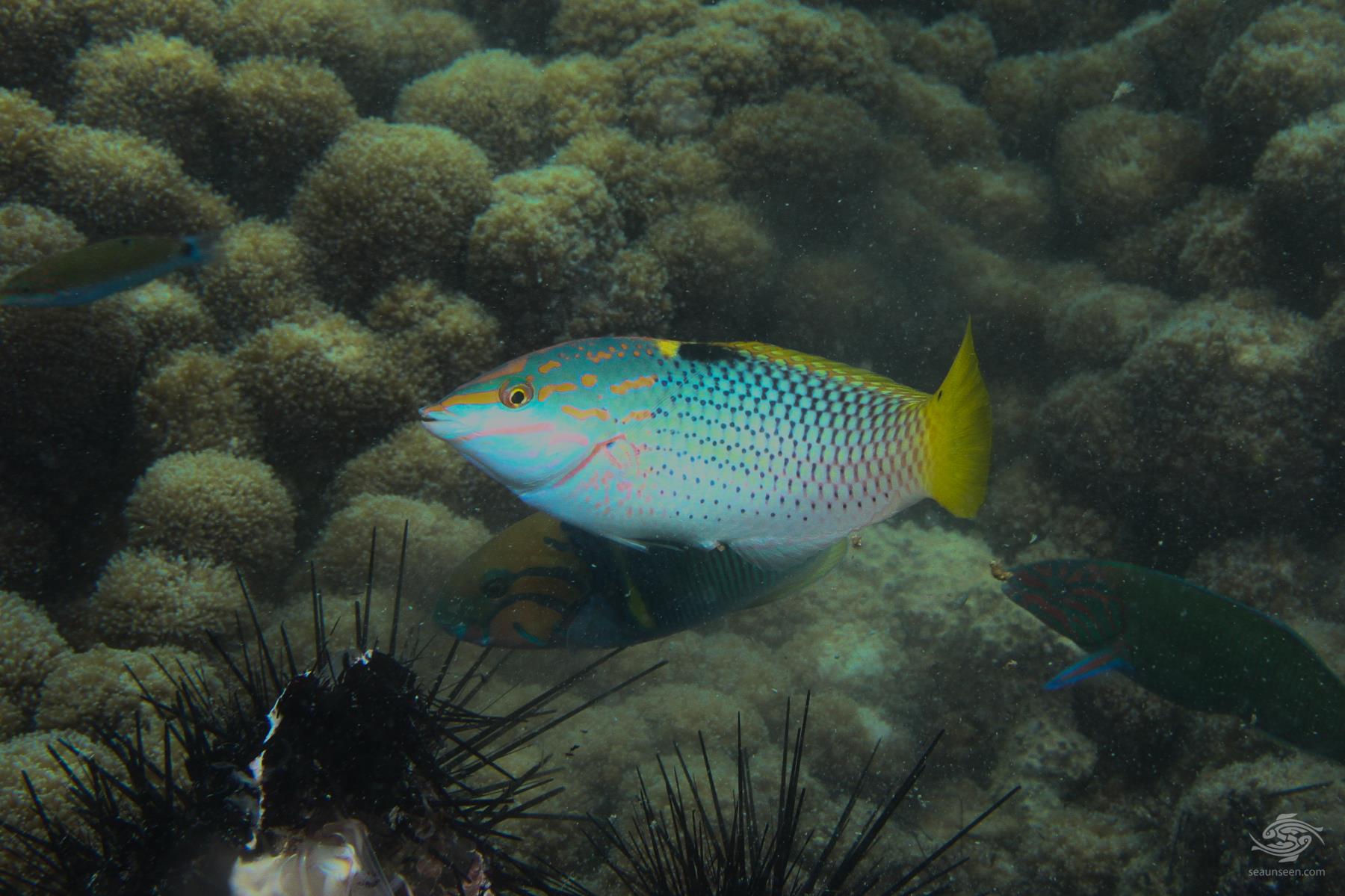 Full grown checkerboard wrasse can reach up to 25 centimetres but 12 to 15 centimetres  is more common in the wild. Overall they have the long thin shape of the Halichoeres family with a pointy nose . On the juvenile the background colour is white with pink stripes in the nose area with at times a bluish green tint. The body is covered with a checkerboard pattern created by off set rows of black stripes between each scale on the white background. The tail fin is yellow as is the dorsal fin which is continuous along the body. As it ages so an “eye” develops midway down the dorsal fin. With age the body of the fish darkens a greenish or blue color and the pink stripes darken slightly. 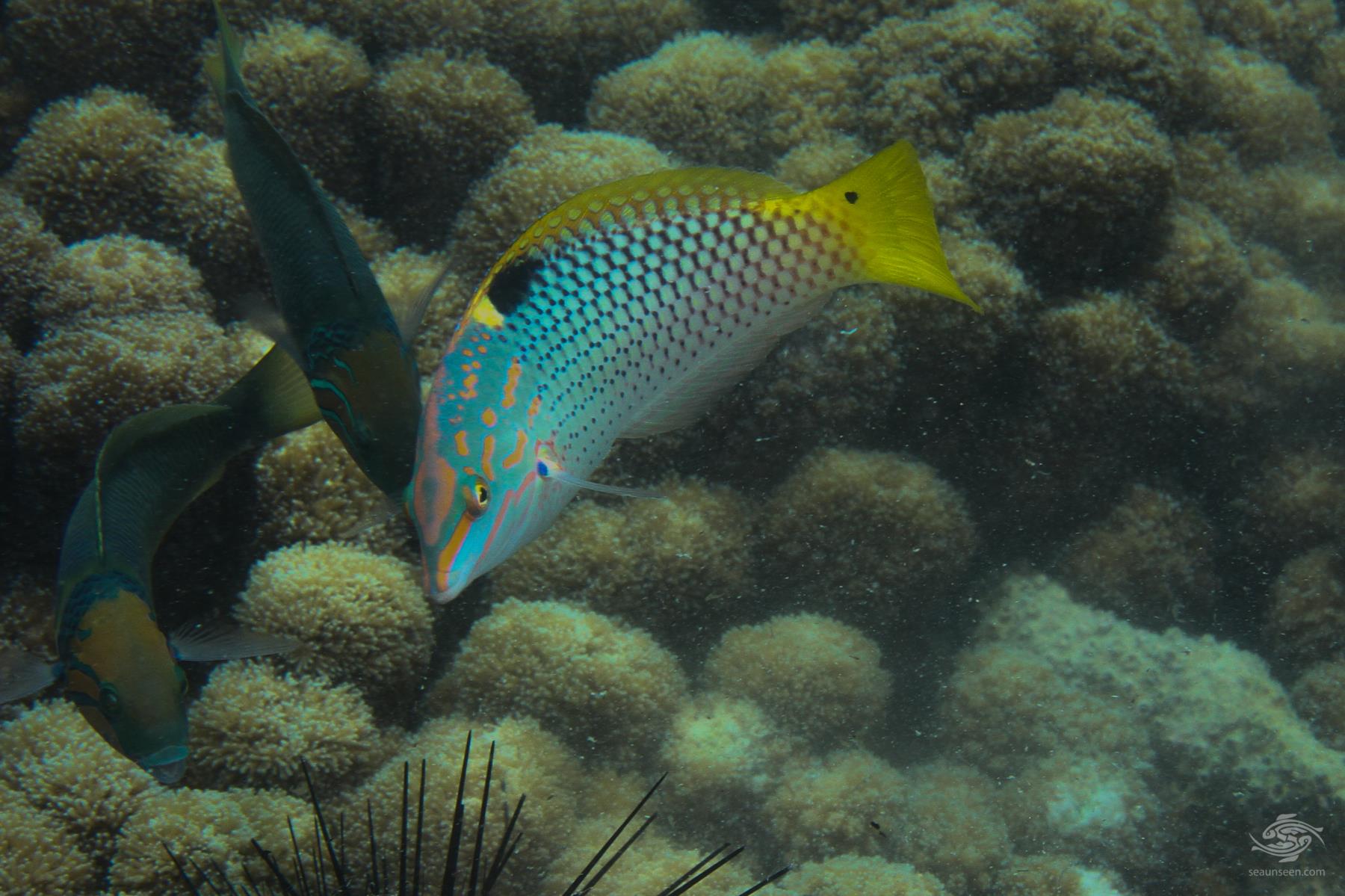 As an aquarium fish the checkerboard wrasse is hardy and easy to feed. They require a good depth of non abrasive sand to bury themselves in and are a pleasant addition to a tank. They require a medium  to large tank as they grow. Care has to be taken as they will jump and they are Reef safe only to a point. They may eat any fan worm, crustacean or snail that fits their mouths, becoming more of a problem as they grow. 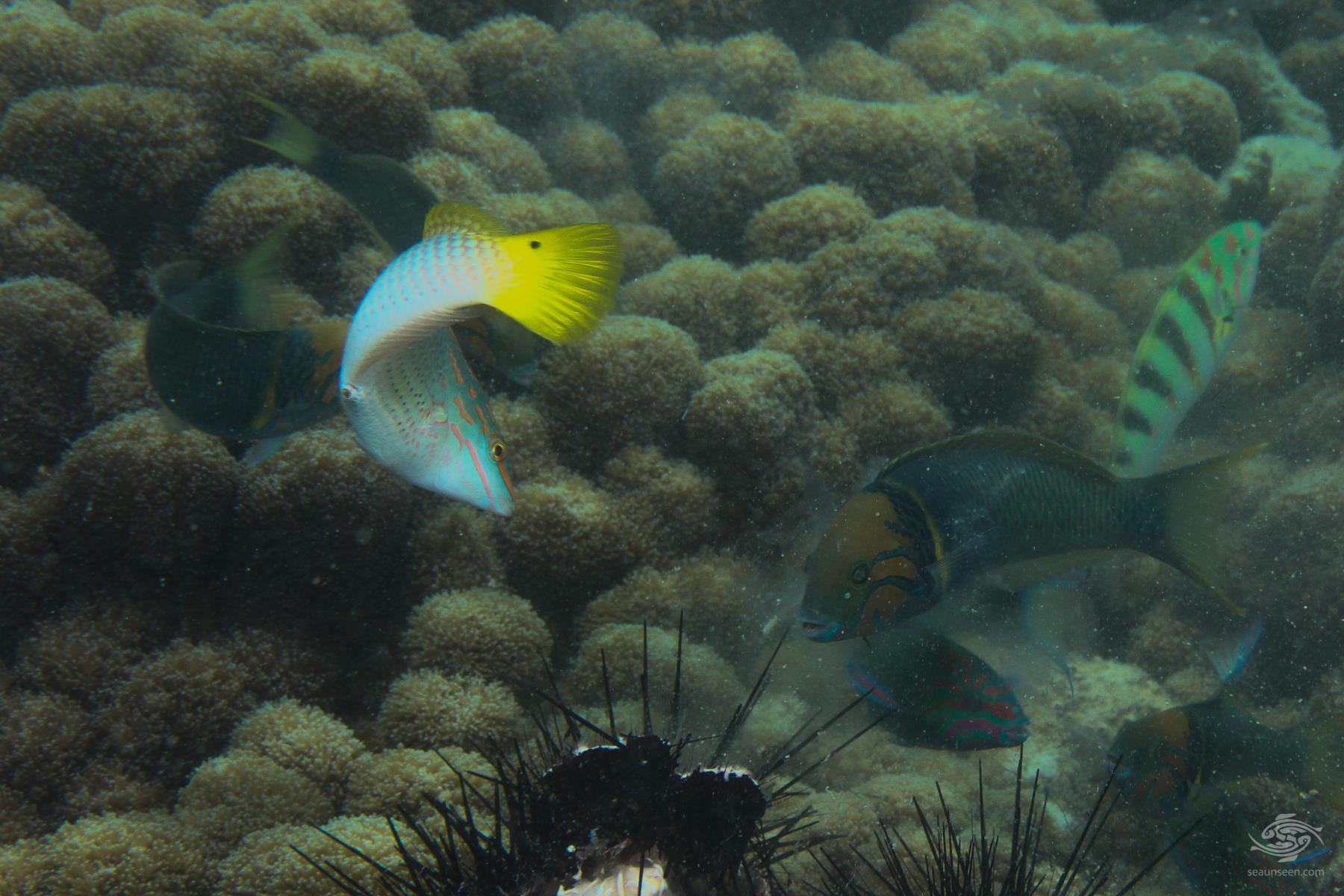