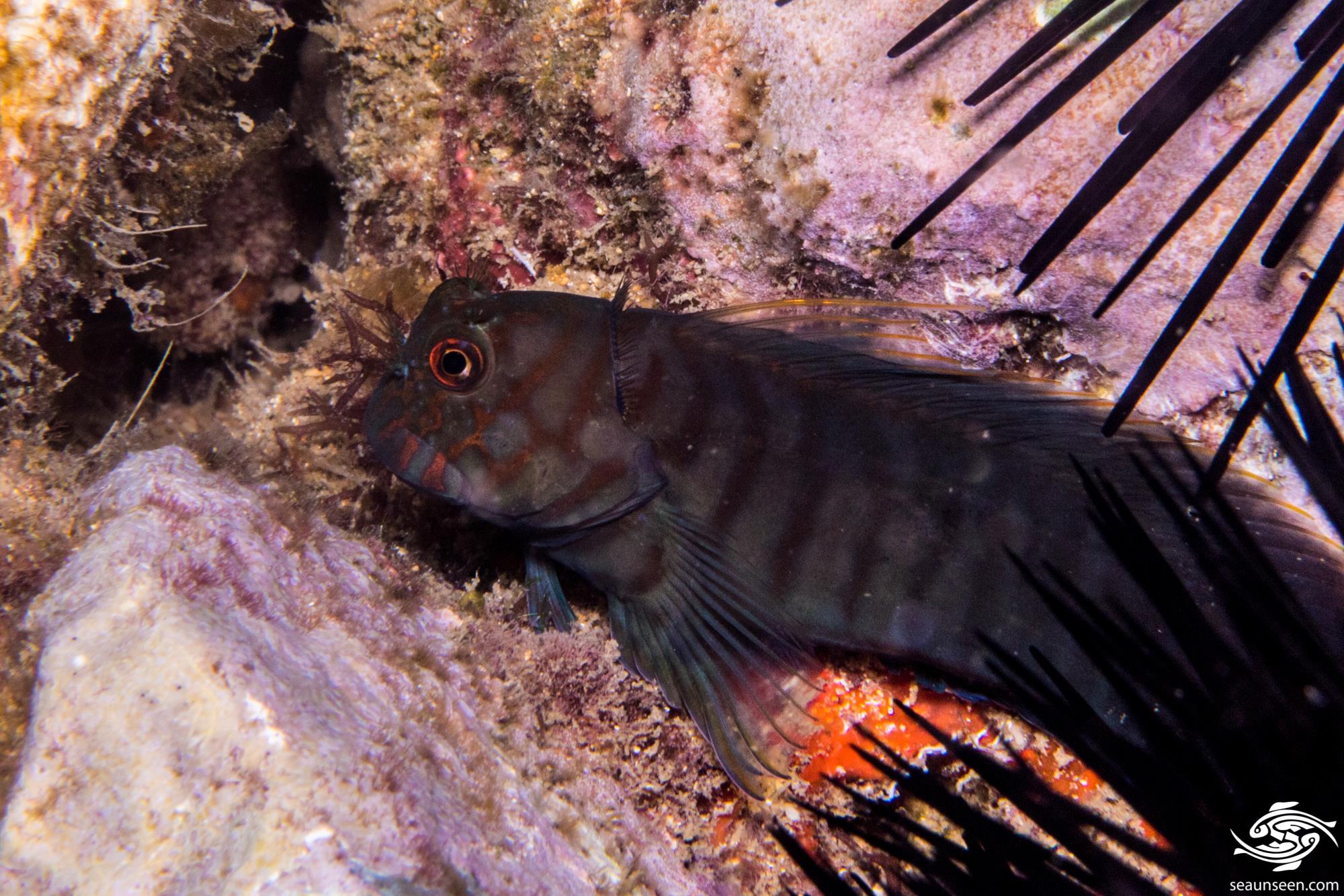 The Chestnut Eyelash Blenny (Cirripectes castaneus) is also known as the Chestnut Blenny. The species was described by Valenciennes in 1836 and were presumably so named (castaneus meaning the color of chestnuts) because the preserved specimen he described it from was a brown color.

They inhabit very specific environments and although they are not common, in these environments in the surge zone they are relatively common.  The wreck of the Slemmestad situated on Daphne Reef in approximately 8 to 10 meters of depth off of Dar es Salaam is where they are most common in the area. The vessel was carrying bags of cement which have hardened over the years and have abundant algal and other growth on them. These provide abundant cracks and holes to hide in and this species is abundant on the wreck.

The Chestnut Eyelash Blenny has a typical blenny shape with a proportionally large blunt head which tapers down to a small tail. The background color of the body ranges from a grey to a light brown and some specimens have a greenish tint. Over the head there are a series of lines which are usually a brick red color but on some specimens are more red over the front of the face. A series of irregular brown bars run down the rest of the body   The pectoral and caudal fins are dark grey in color and the dorsal spines are sometimes yellow on some specimens.

Chestnut Eyelash Blenny have a fringe of cirri running across the nape  with tentacles above each eye giving them the eyelash section of their name. The eyes are proportionally large with a red ring around the edge of the eye and these can we swiveled forward to allow vision ahead. They grow to roughly 14 cm in length. 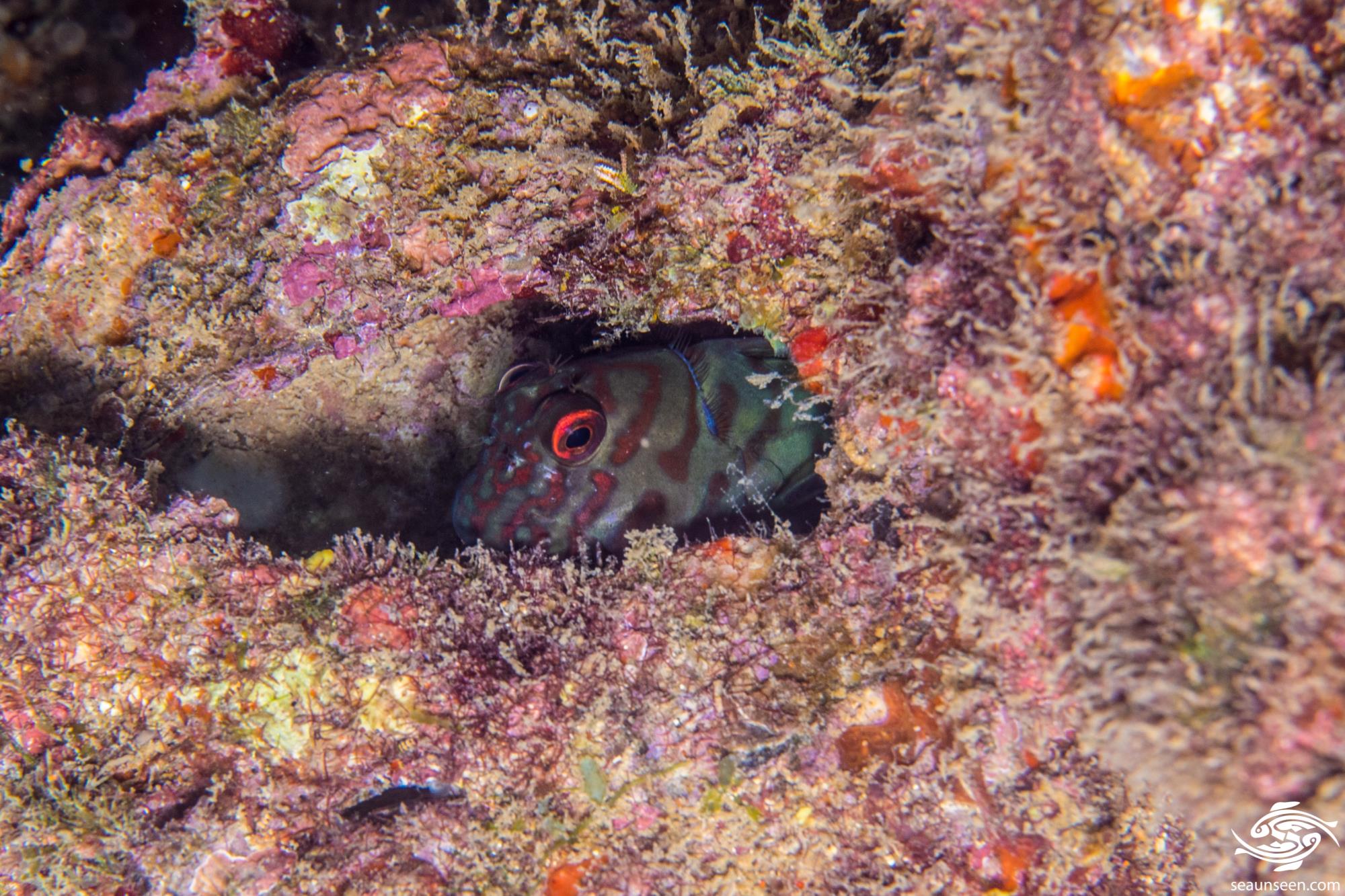 CHESTNUT EYELASH BLENNY IN THE WILD

The Chestnut Eyelash Blenny is quite shy and will generally pop into a hole or crevice, being quite curious they will usually turn round and observe one.  They also use the spines of urchins for protection and will sit under the urchin spines allowing one to get fairly close before darting off into a hole.

They are usually but not always seen singularly but if there is one there are likely to be others in close proximity.

The Chestnut Eyelash Blenny occurs throughout the Indo- West Pacific, from the East African Coast and Red Sea, to Japan in the north and down to Lord Howe Island including parts of Micronesia.  They are usually found above 10 meters in the surge zone, always with a hiding place or hole close by. 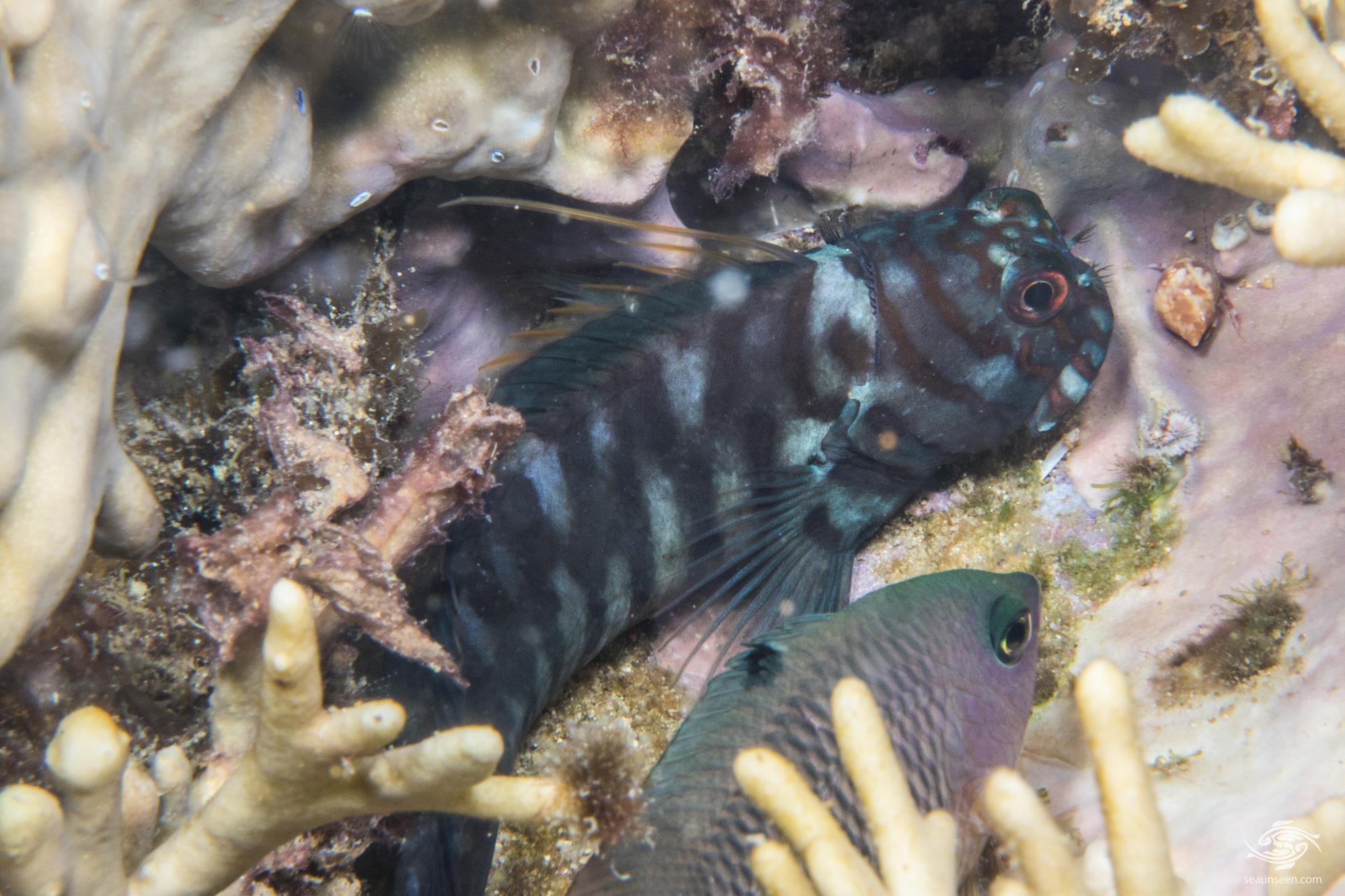 They feed mainly on algae  and eat by using its lower jaw to bite onto the algae while the upper jaw (with the comb like appendages) scrapes algae into its mouth. 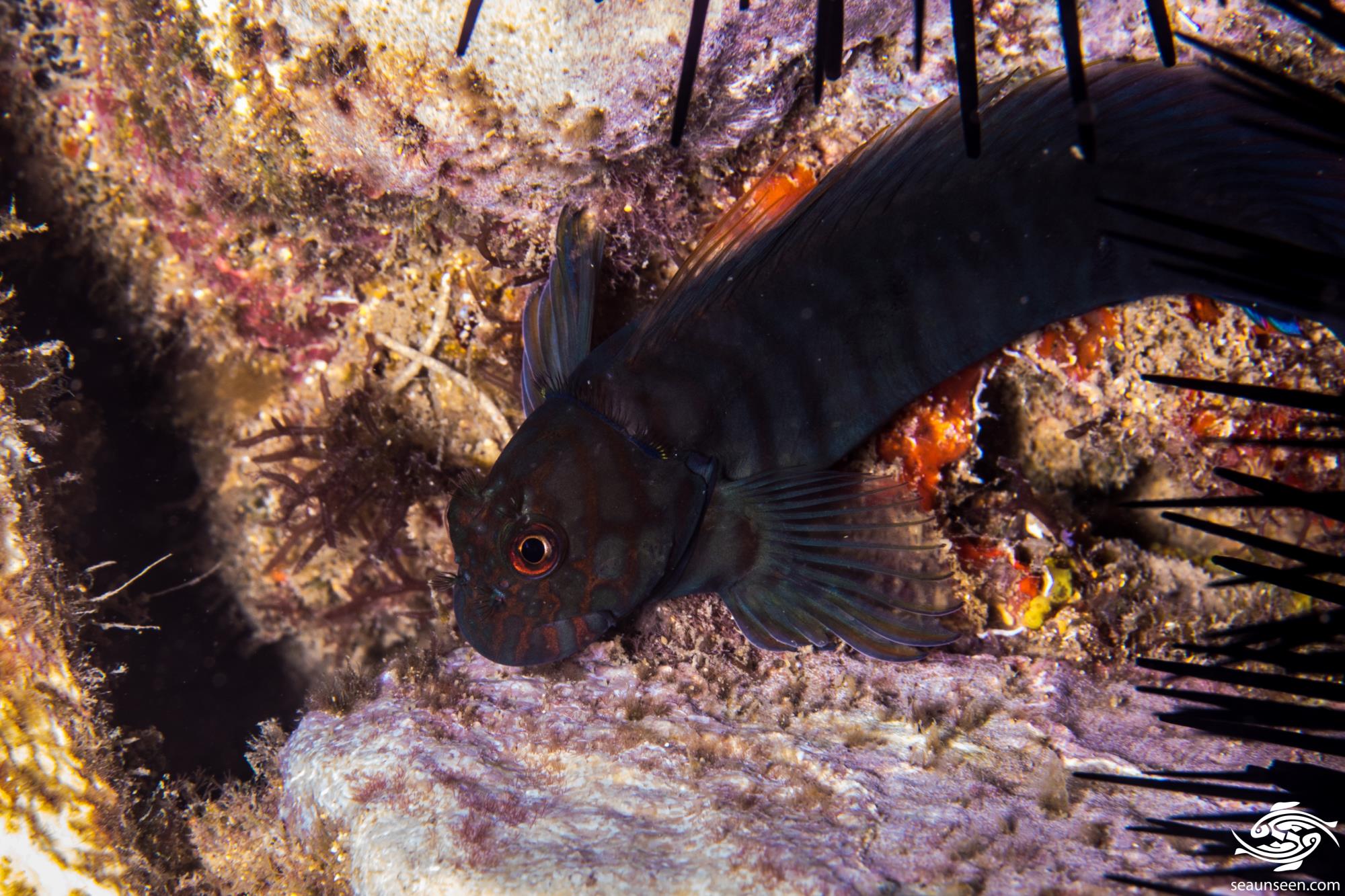 Not much is known of the reproduction, however distinct pairing takes place and the eggs are adhesive. 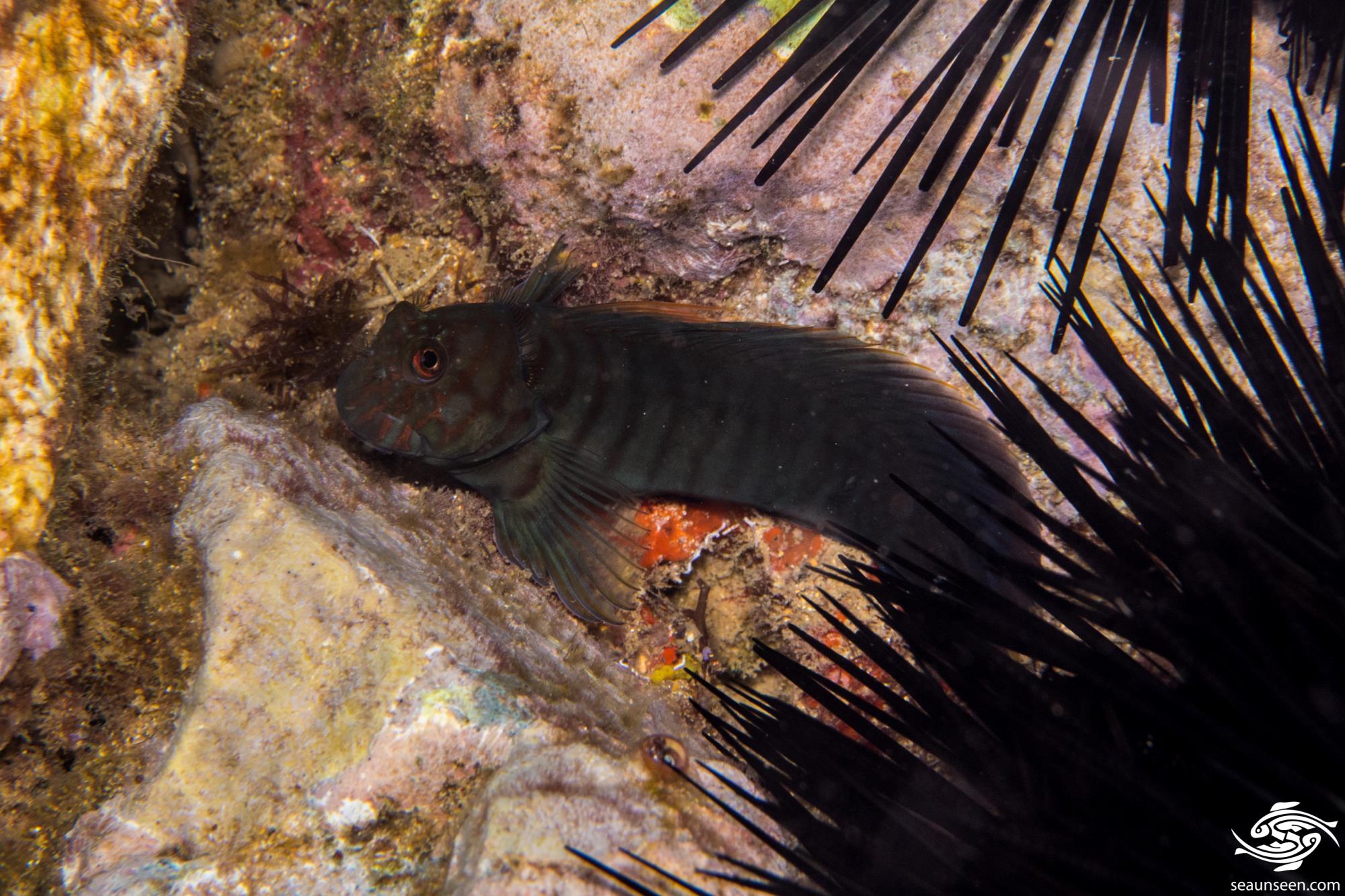 They are kept by some aquarists but do not seem common in the trade, probably due to their comparatively dull looks. They would probably be relatively easy to keep and feed and if their curious behavior in the wild is anything to go by then they will have plenty of personality.  Note the specimen below swiveling its eye forward to watch me. 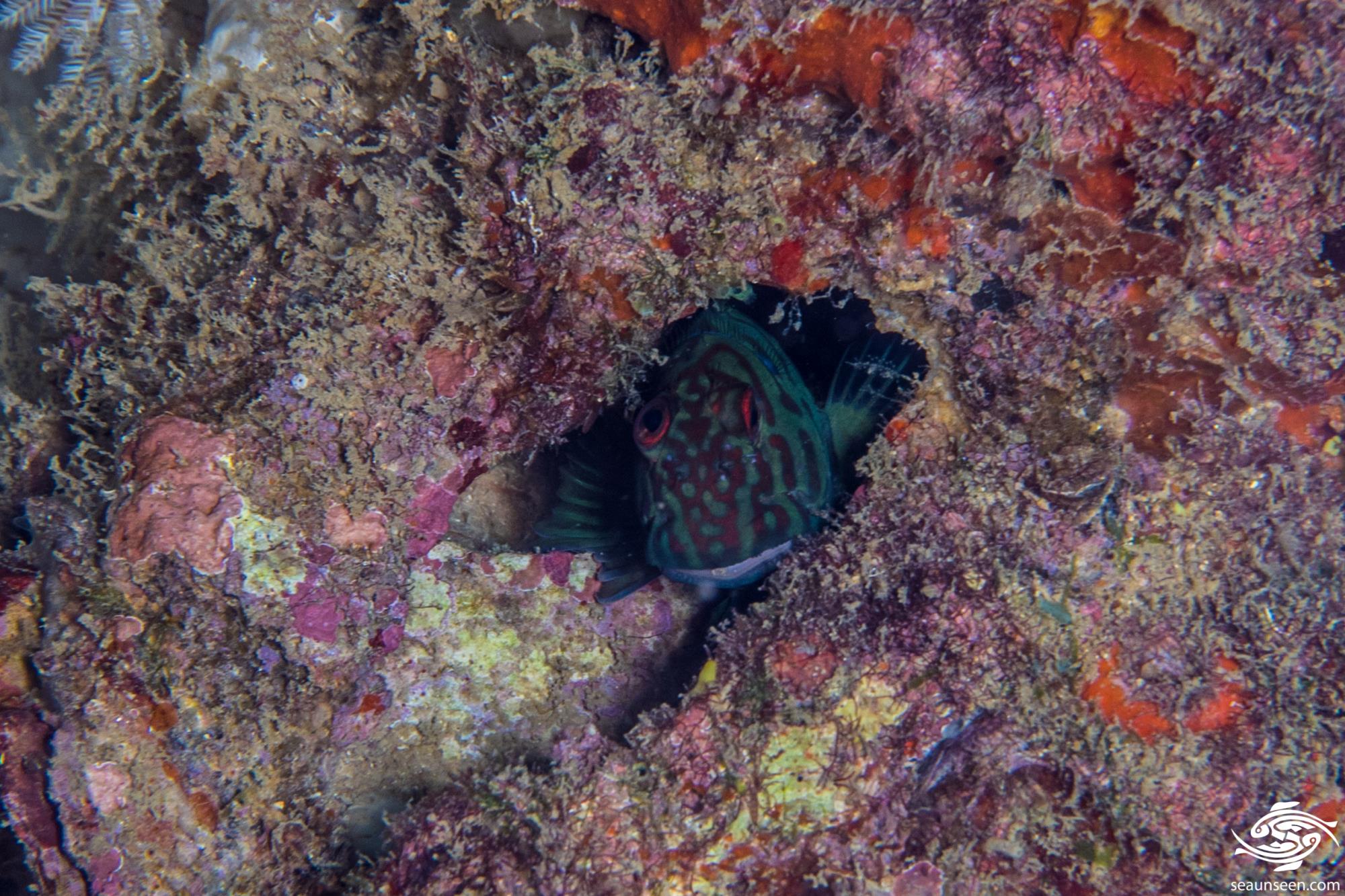