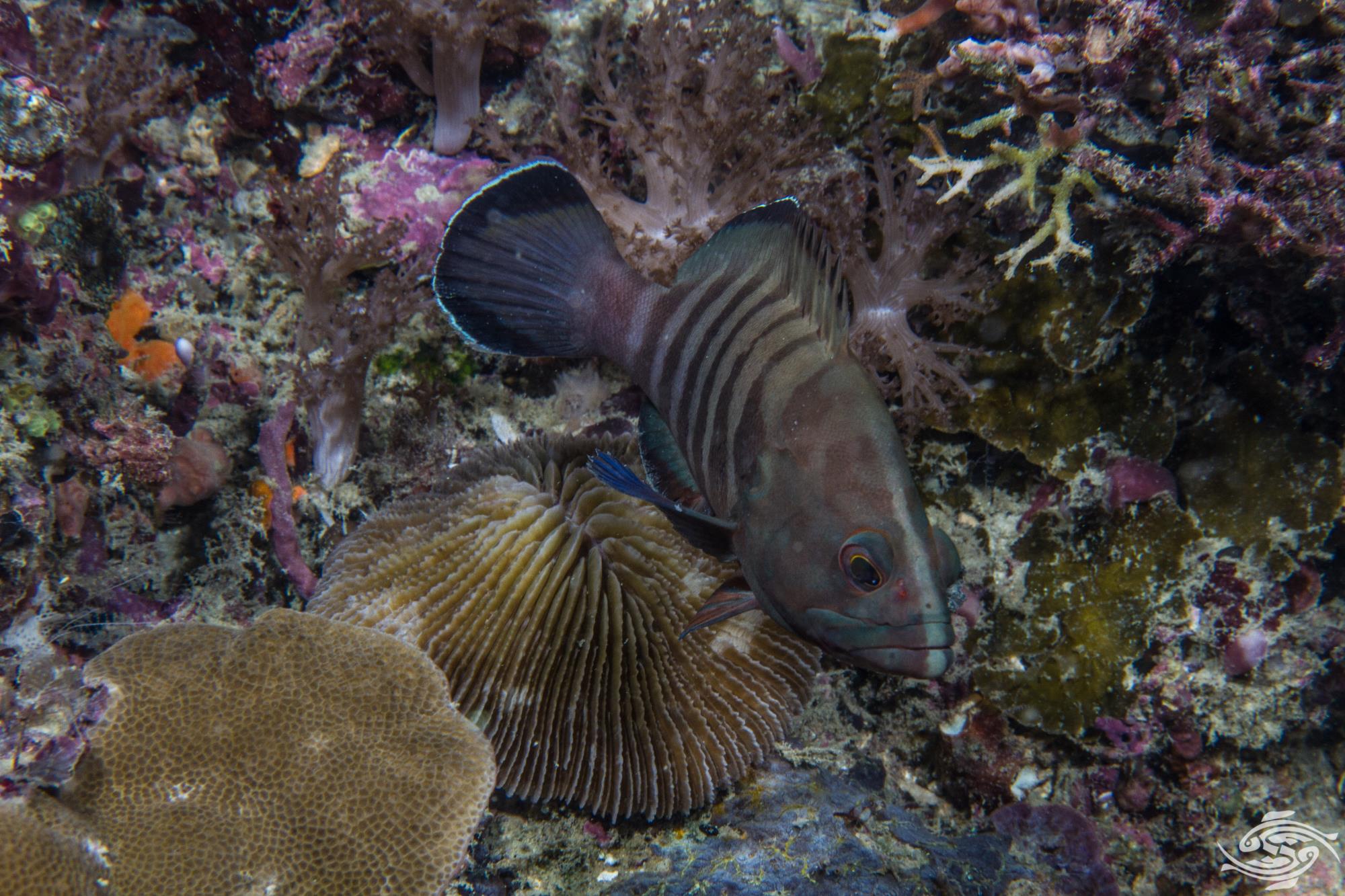 The Chocolate Grouper (Cephalopholis boenak)is also known as the Chocolate Hind and the Brownbarred Rockcod. They are fairly common off the coasts of Tanzania and Kenya. They are not that common in the Dar es Salaam area which is heavily overfished. Because of overfishing they are generally only seen in deeper waters. 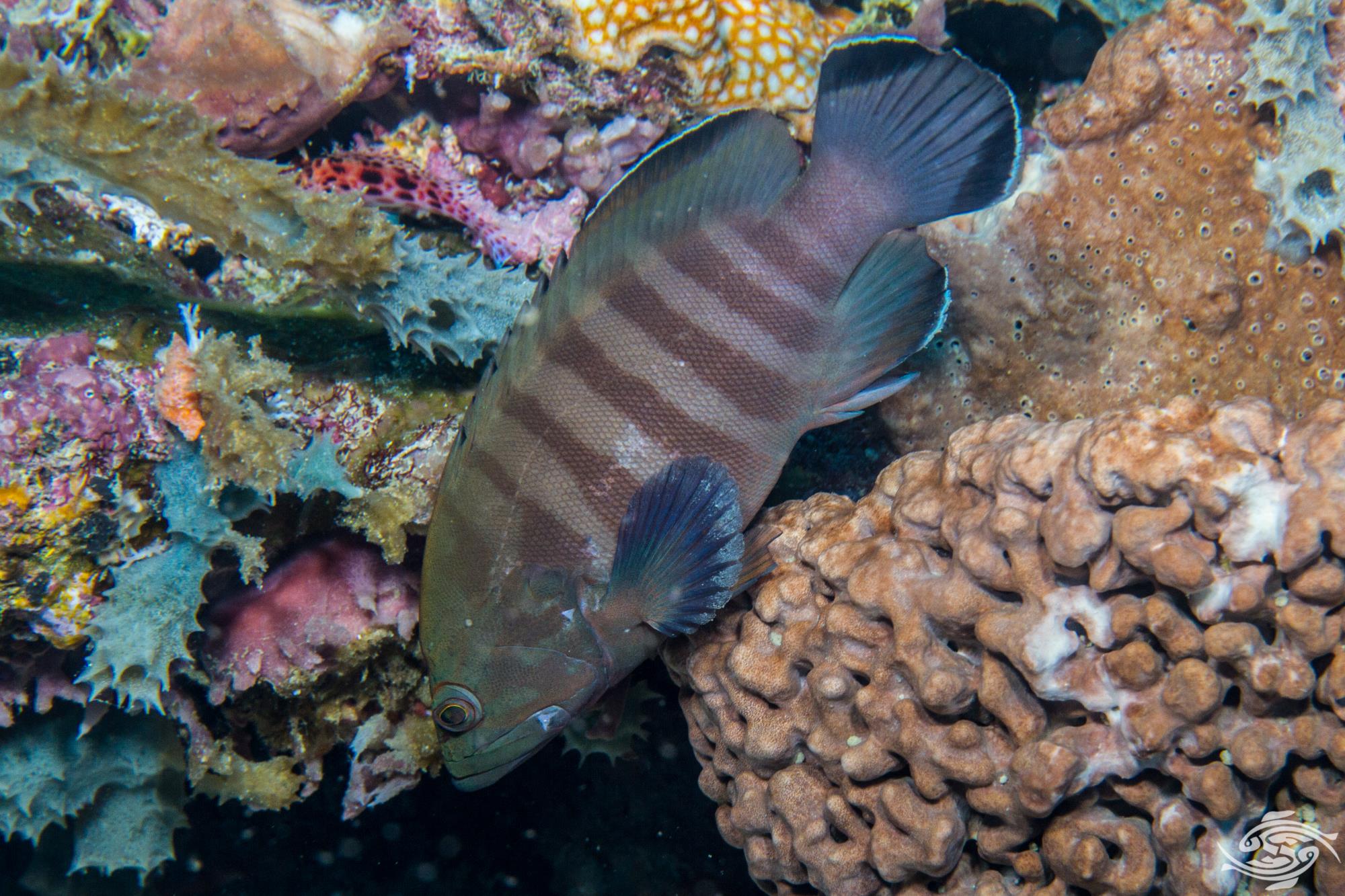 The Chocolate Grouper has a fairly typical grouper shape. It’s typical coloration is a light brown body with seven to eight brown bars down the body. The facial area has a whitish line running up the nose and the face is a green and brown colour. The caudal and anal fins are a greenish brown colour with a blue line around the rear edge. The dorsal fin is a similar colour with a blue edging on the rear.  They grow up to 30 cm in length. The juveniles have a yellowish rear body with a similar coloured facial area to the adults. 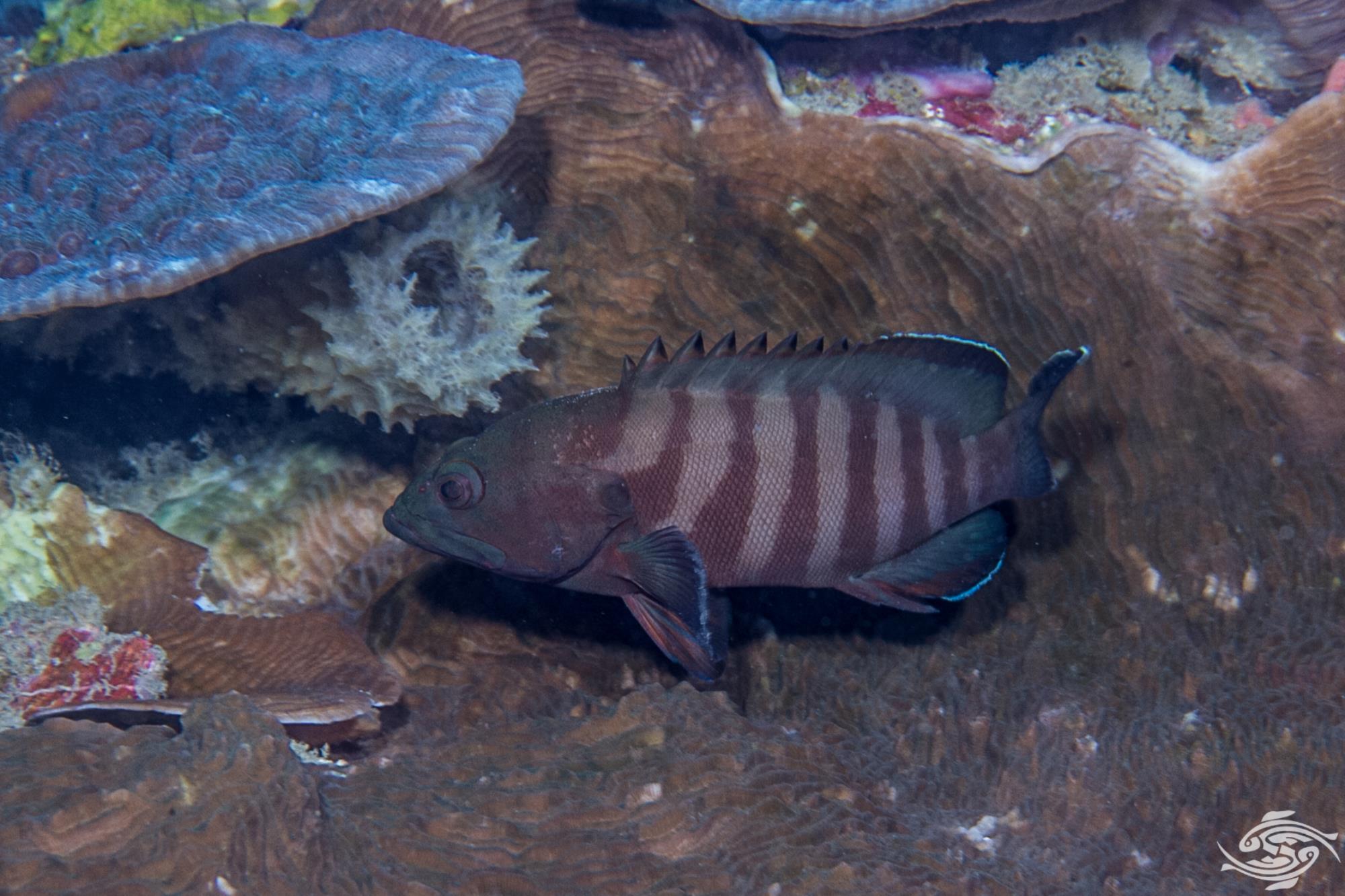 The Chocolate Grouper is very shy in the Tanzanian coastal waters and tends to head for cover at the first sign of a diver. This is undoubtedly due to the dynamite fishing and being overfished. On the offshore islands of Mafia and Zanzibar they are not as shy. 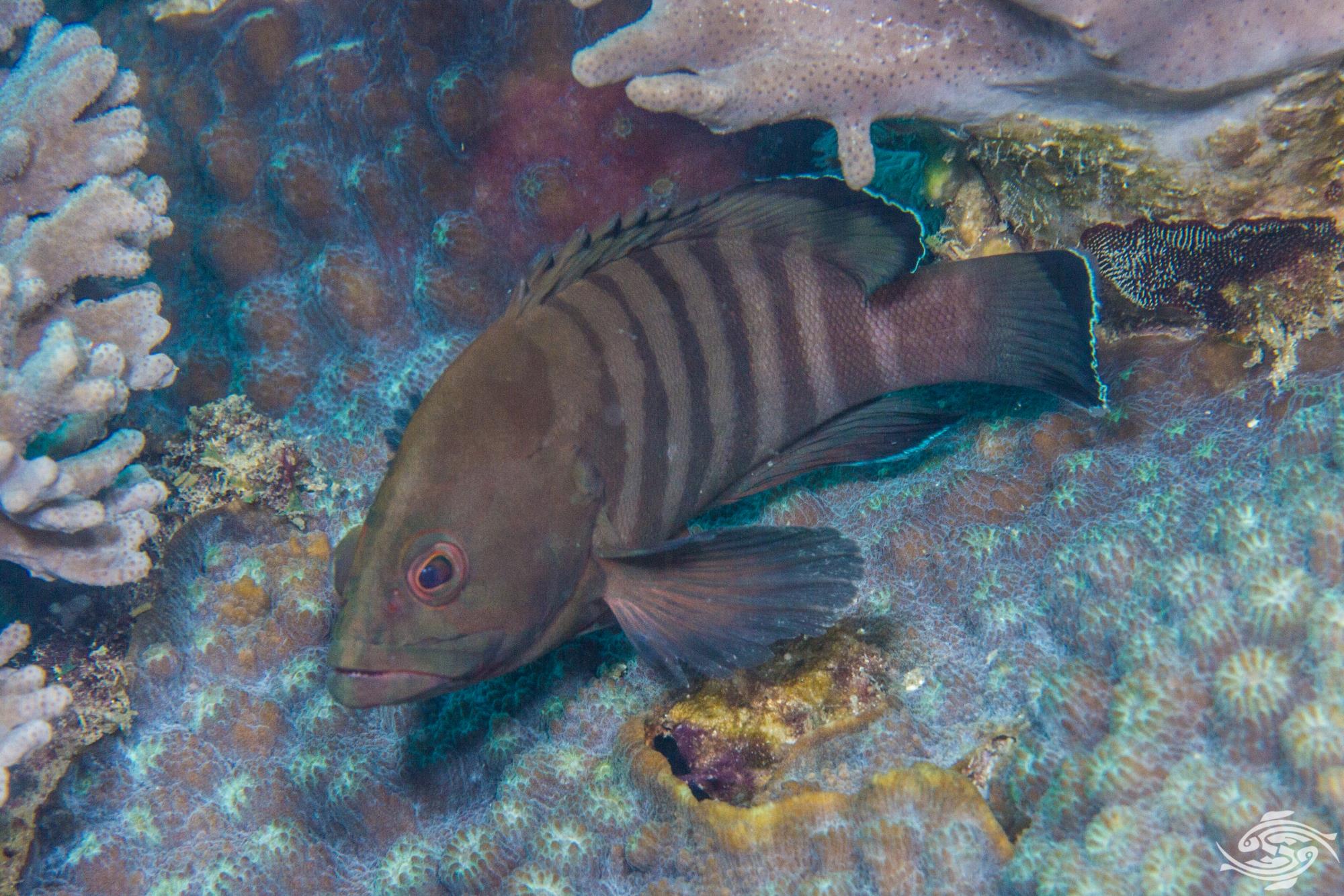 They are found on the East African coast from Mozambique to Kenya across to Japan and south to Northern Australia.  In Tanzanian waters they are seen only on the deeper reefs at around 20 plus meters, mainly on coral walls that drop off into deeper waters, 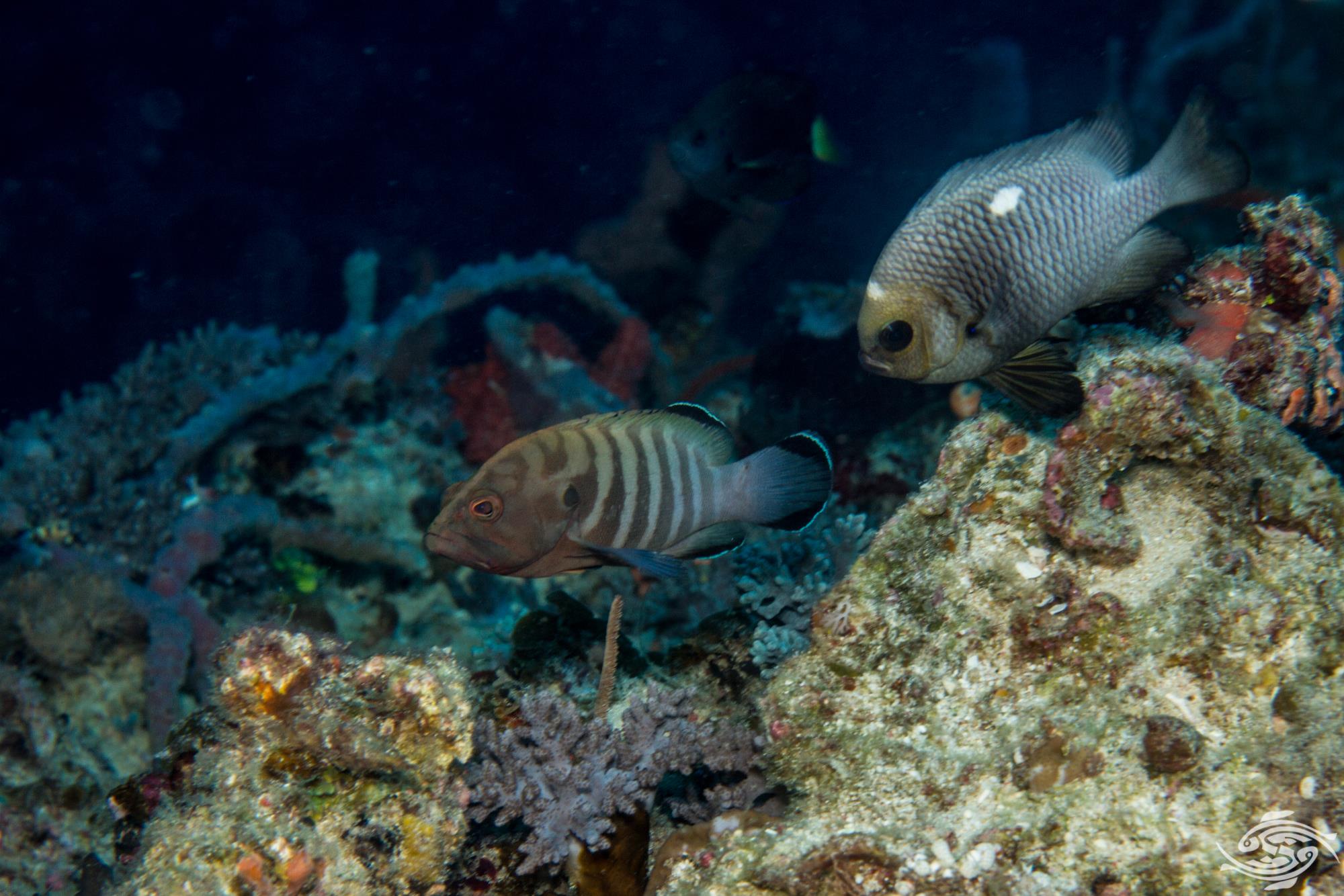 The main diet of the Slender Grouper is small fishes, small cephalopods and crustaceans.  They are ambush predators who vary their diet according to location and availability and as with most groupers pretty much anything moving that can fit into their mouths they will. 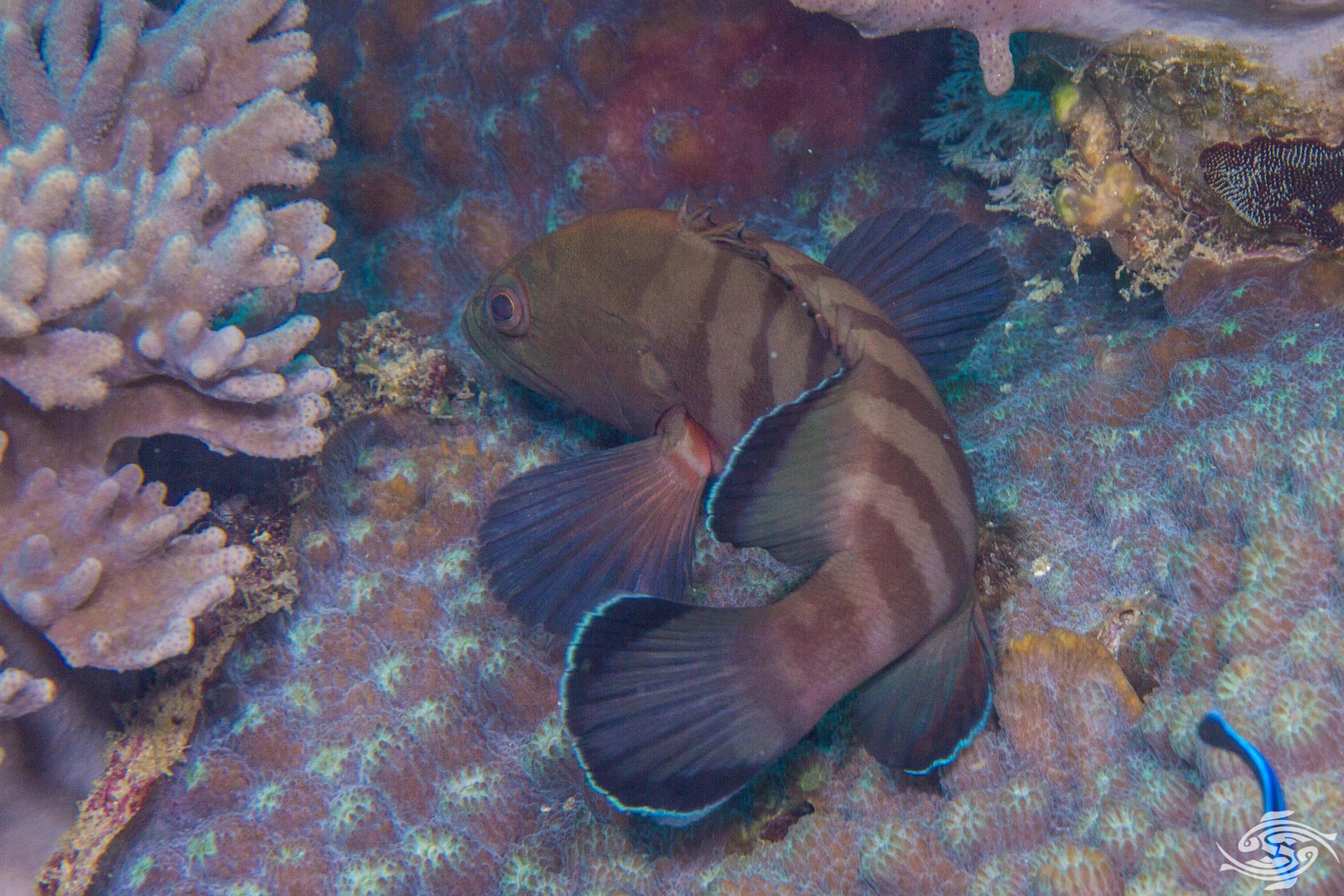 They are usually found in groups of a male and several females. Spawning takes place between couples. They are diandric protogynous hermaphrodites and even the adult males have the ability to change to a female if necessary. This allows them to be more resilient to overfishing. They also mature at younger ages than most other groupers. 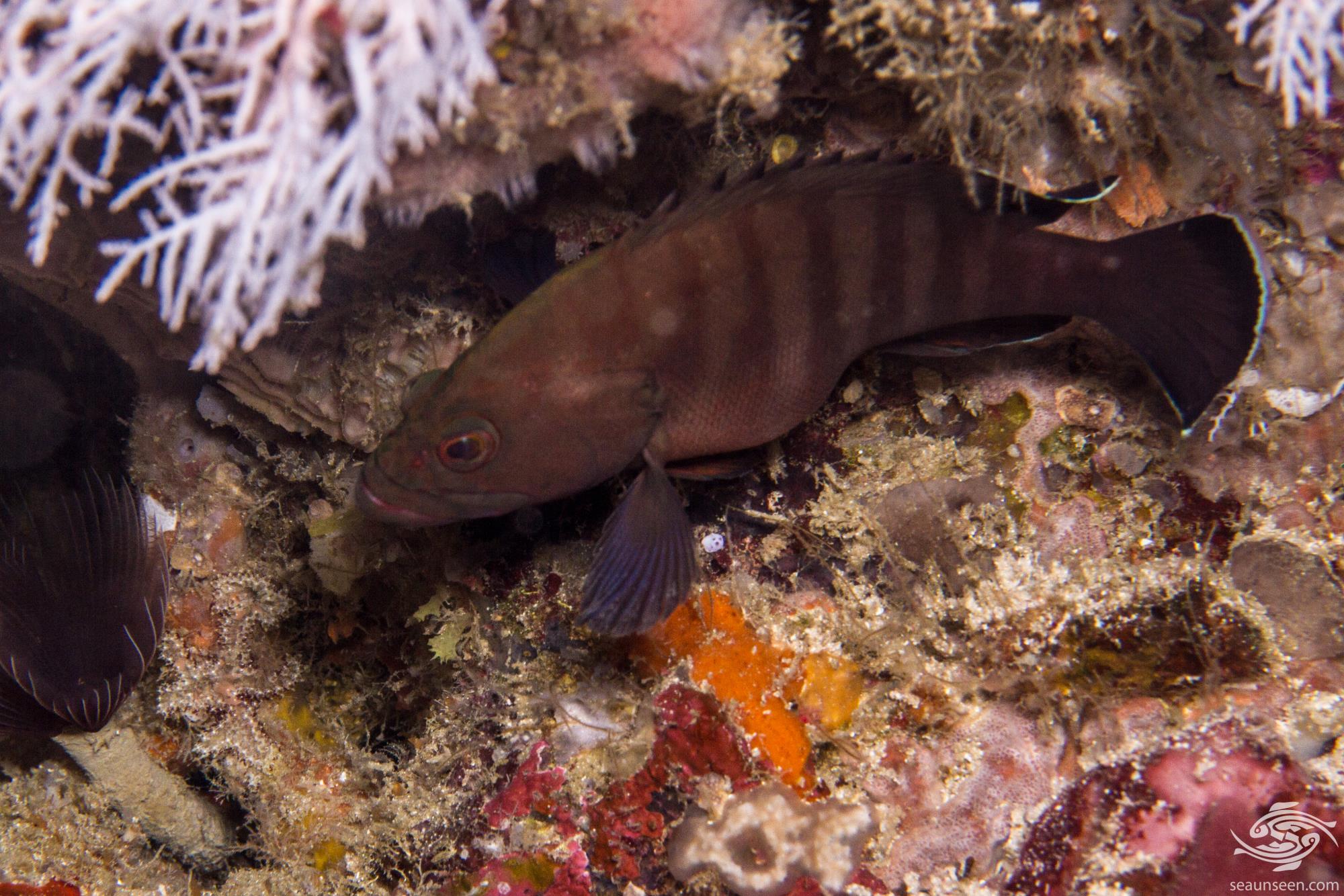 When the female is ready for mating the lower body swells with eggs as can be seen in the image above. 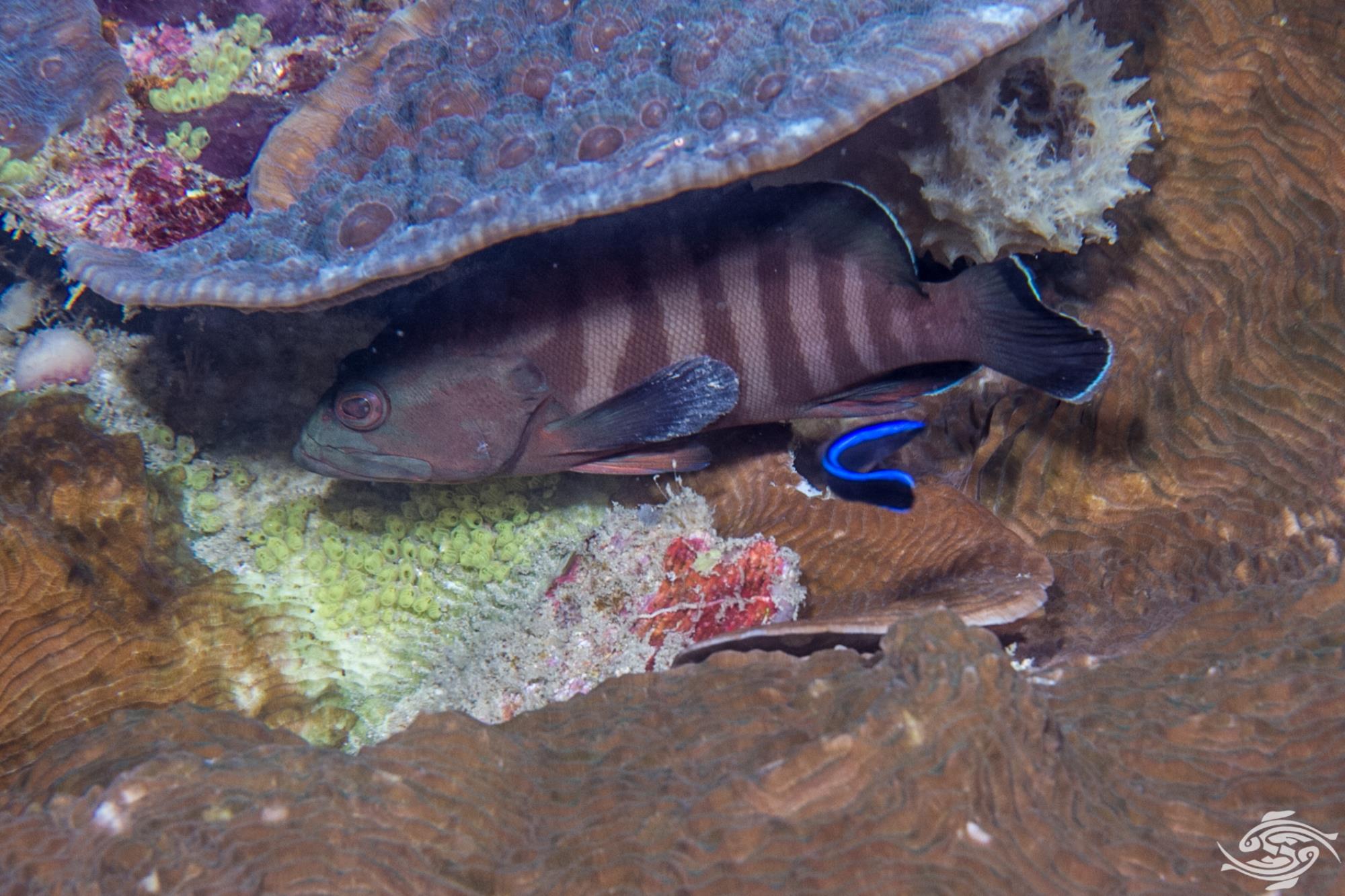 The Chocolate Grouper is certainly over fished by subsistence fishermen in Tanzania. Most inshore areas of the Tanzanian coast are heavily over fished. In China and other parts of Asia they are reportedly also heavily overfished. 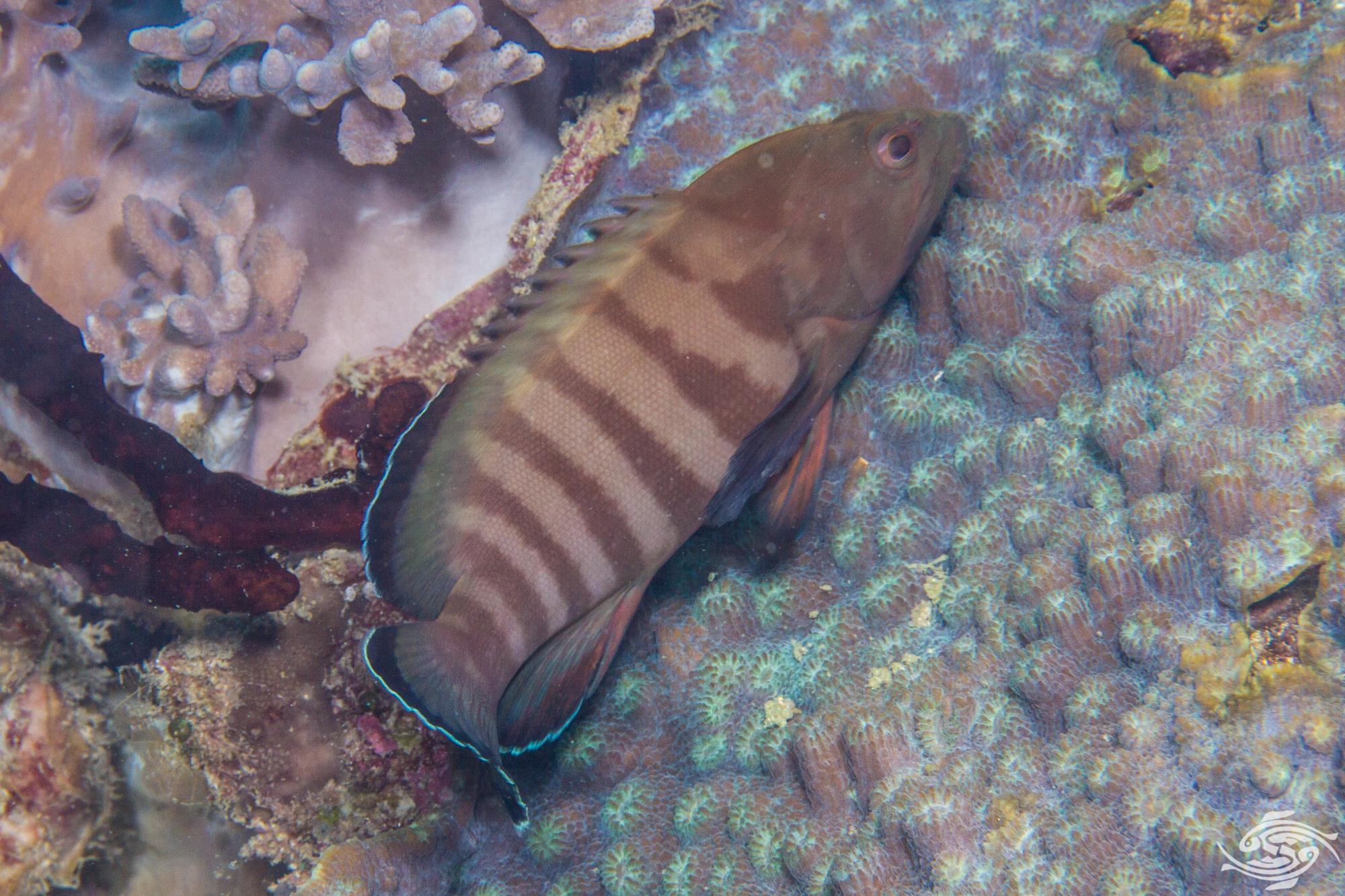 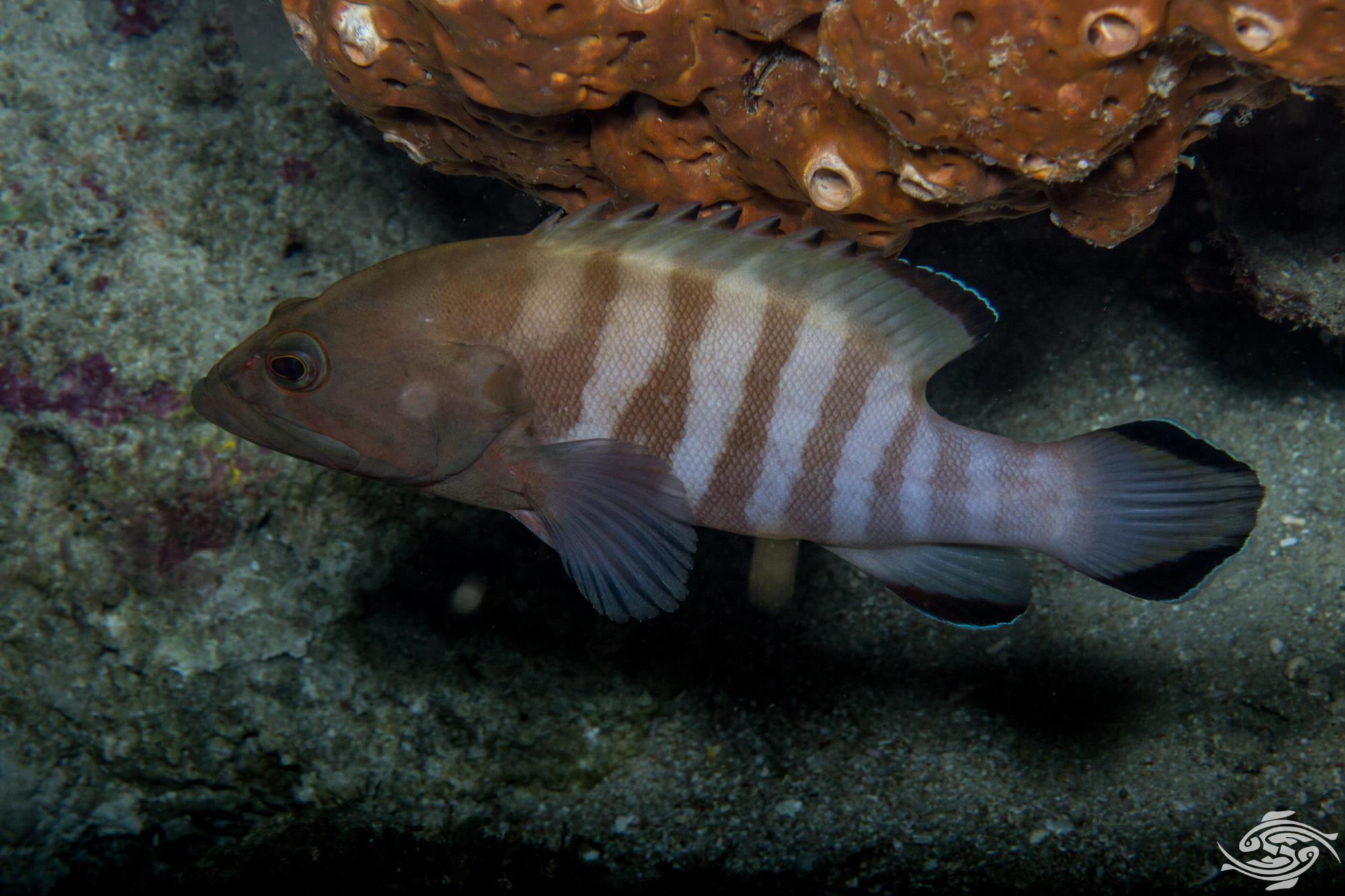 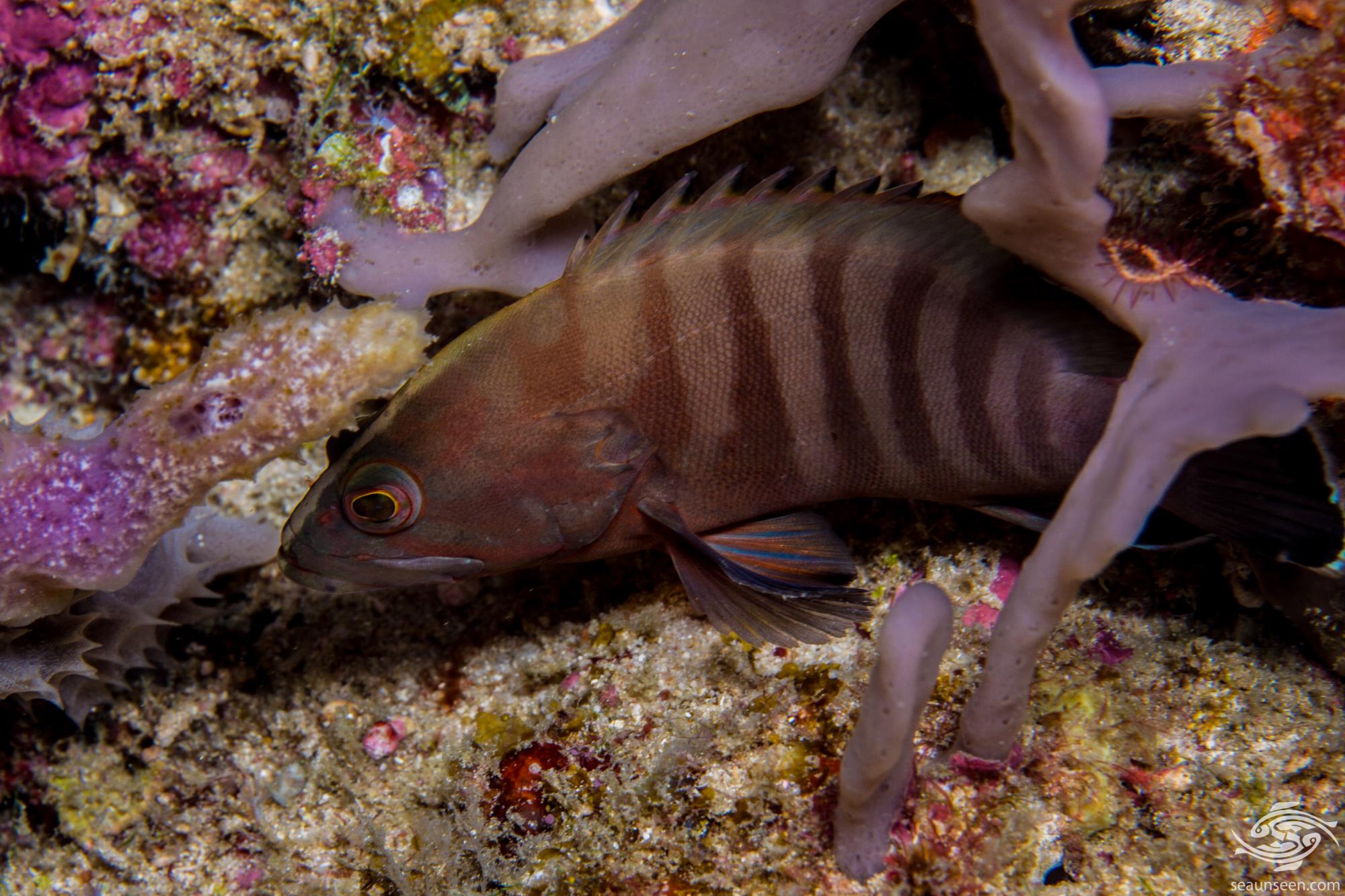