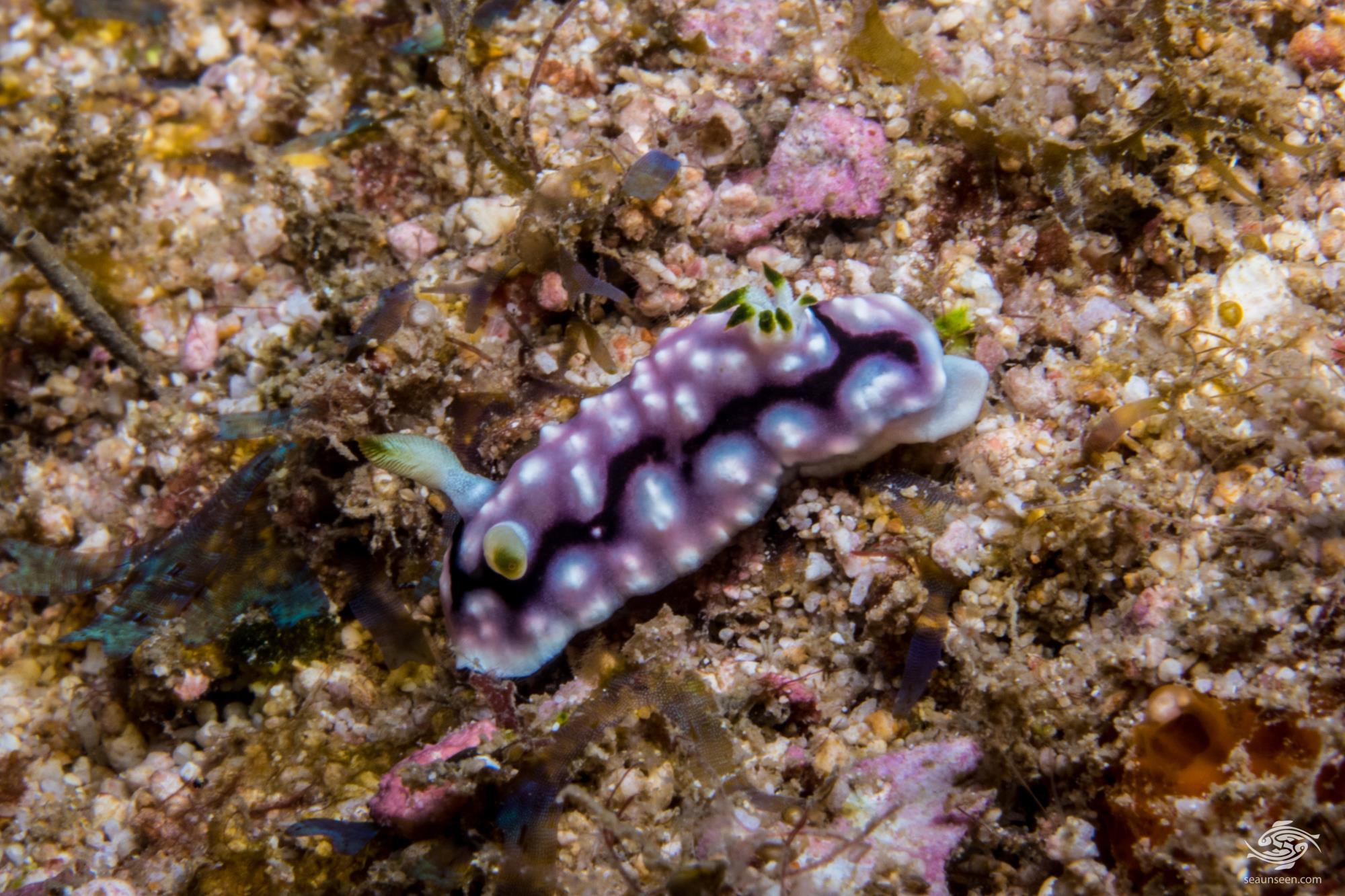 Chromodoris geometrica is a dorid nudibranch, a marine gastropod mollusk that is also known by its common name of the Geometric Chromodoris.  They were initially described in New Caledonia in 1928 by Risbec as Goniobranchus geometricus but in 2012  Johnson R.F. & Gosliner T.M conducted DNA analysis and they were revised as falling within the Chromodoris genus.

Chromodoris geometrica have an elongated oval shape and  tubercles of different sizes spread across the body. The  body colour is a light pink and there is a black or dark purple line circling the body around the gills and rhinopores which has a short line extending off onto the posterior section behind the gills . The rhinophores and gills are white and tipped with green. They grow up to 7 centimeters in length. 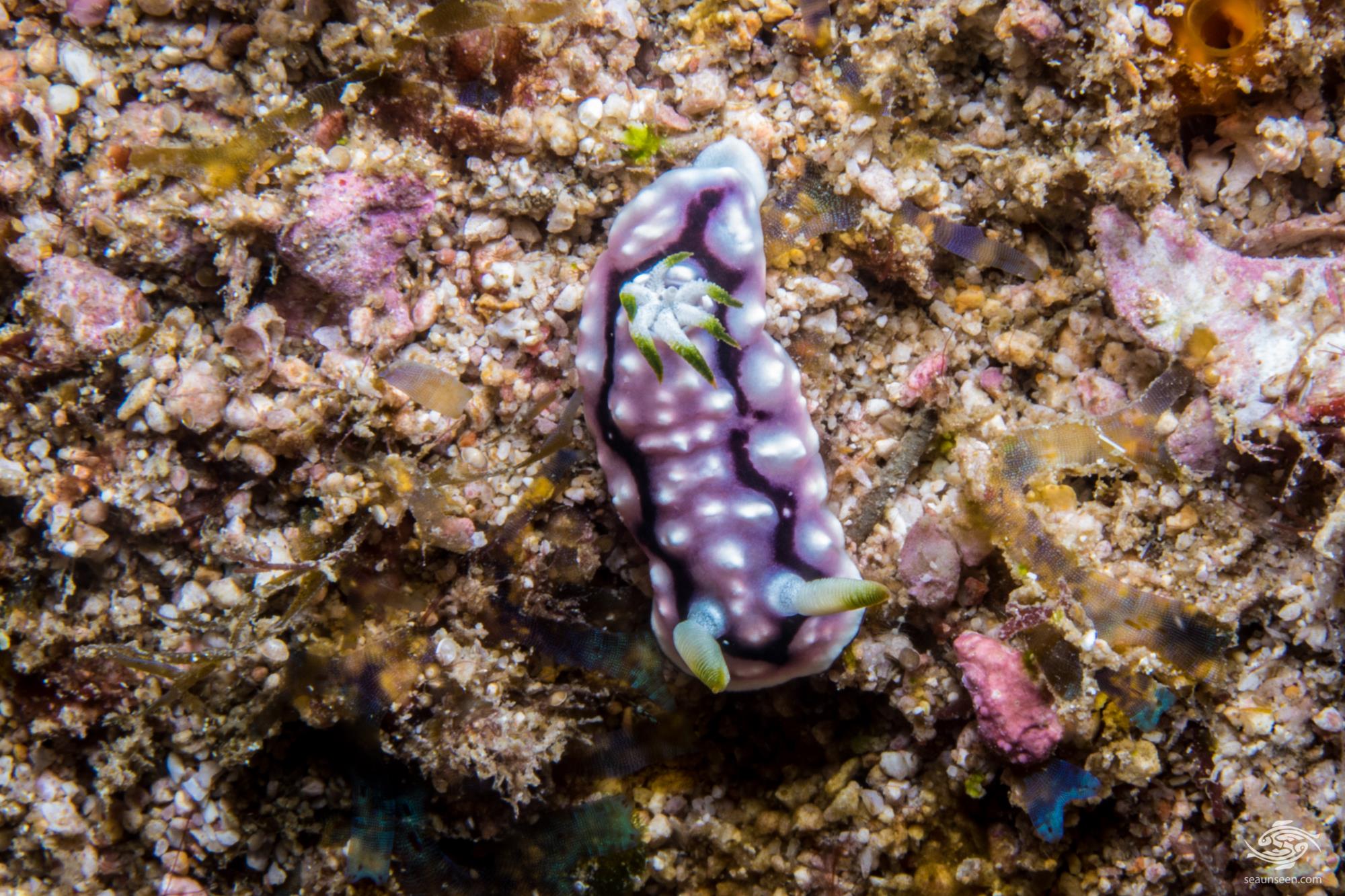 CHROMODORIS GEOMETRICA IN THE WILD

Chromodoris geometrica are not that common  in Tanzanian mainland waters, but when one sees one, one will generally see a few more for a few weeks and then not see any for quite some time.  Studies by Vladivostok University have shown that C. Geometrica have unusual long chain fatty acids and other bioactive compounds which may be useful for medicinal purposes. 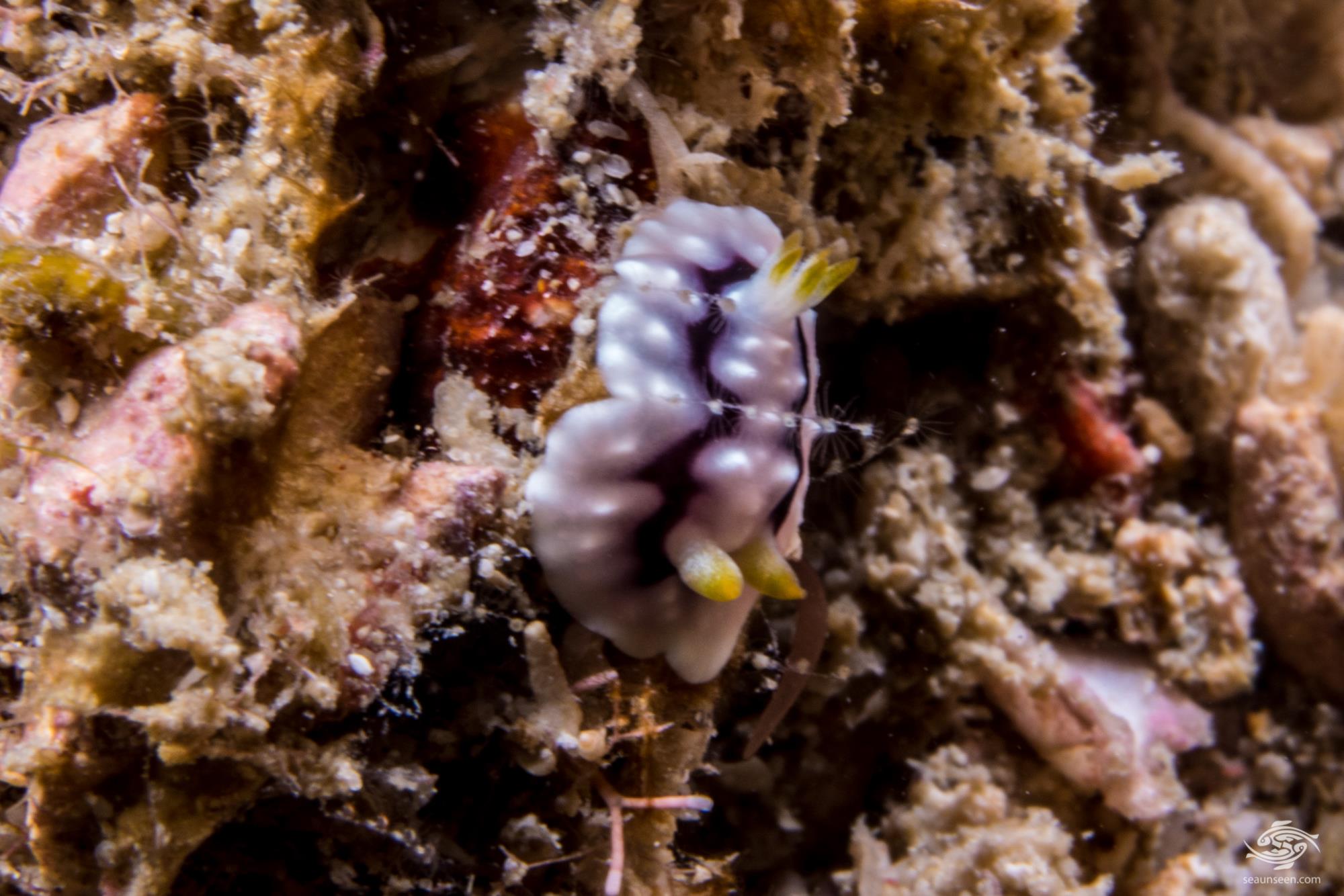 Chromodoris geometrica are found across the Indian ocean and in the west Pacific. 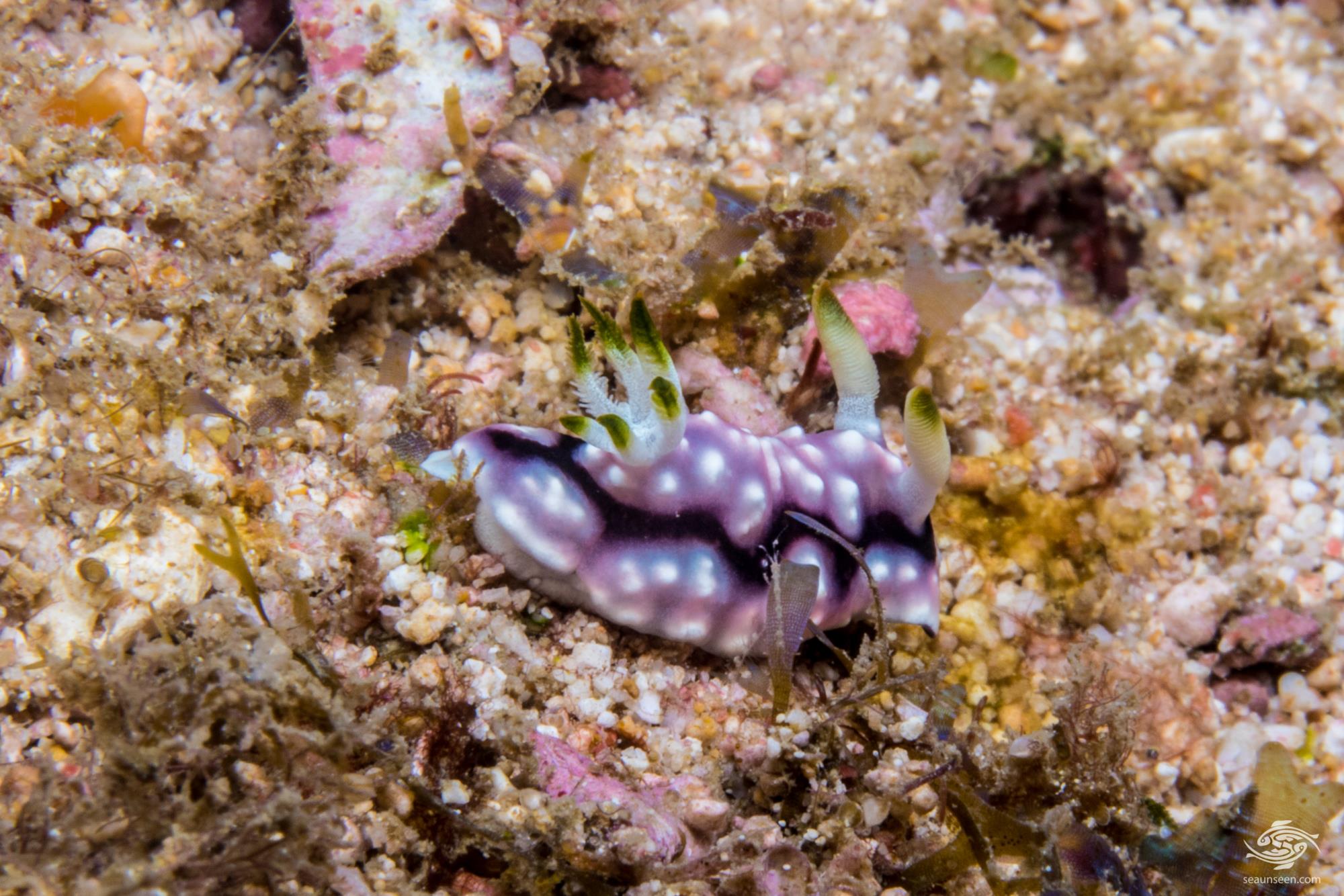 Chromodoris geometrica feed mainly on certain species of sponges. The chemicals synthesized by bacteria in the nudibranch from these sponges provide them with chemical protection against predators. 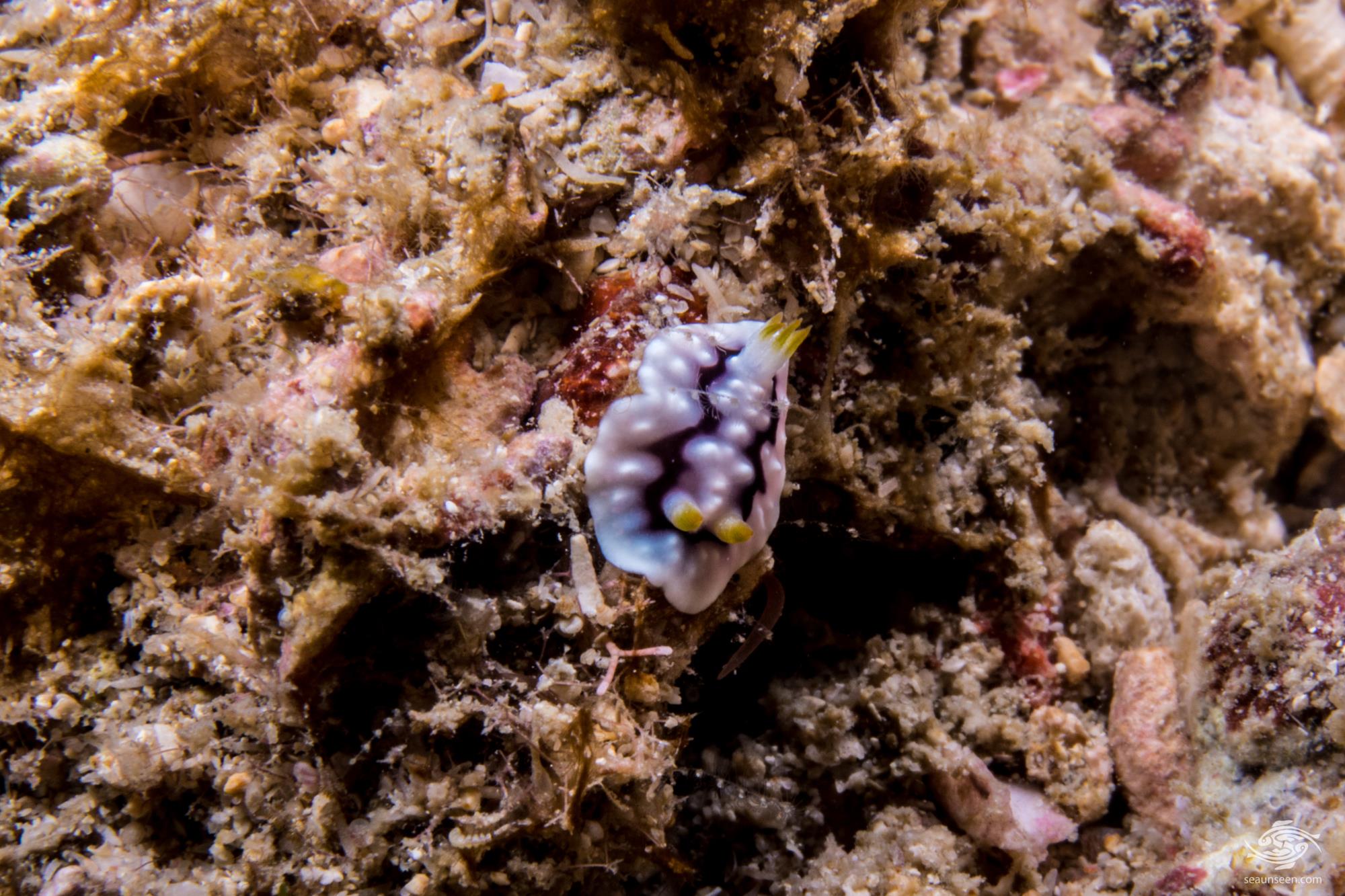 Chromodoris geometrica are simultaneous hermaphrodites and mating takes place by connecting the sexual organs which are on the right hand side of the body. Two specimens manouvre right side on and extend their organs towards each other. Once the two organs hook up sperm is transferred across to each specimen. Eggs are laid on a solid substrate in a gelatinous egg ribbon and when they hatch the larvae or  veligers as they are known become planktonic before growing into adults.

Interestingly C. geometrica have been found to deposit yolk into their egg ribbons which provide food for the new hatched veligers. It is thought that this allows the veligers to be larger than other species that do not exhibit such behavior. 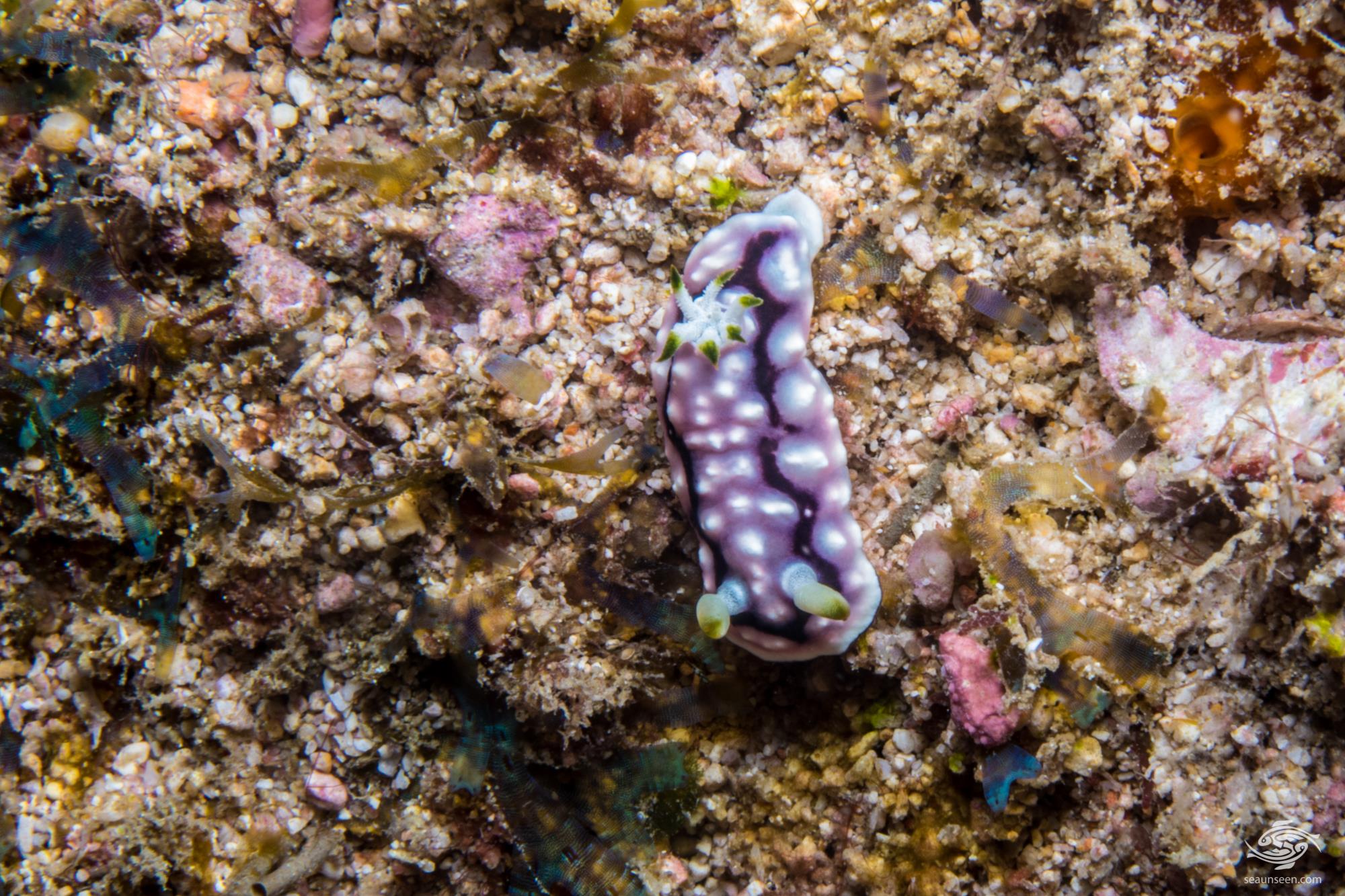