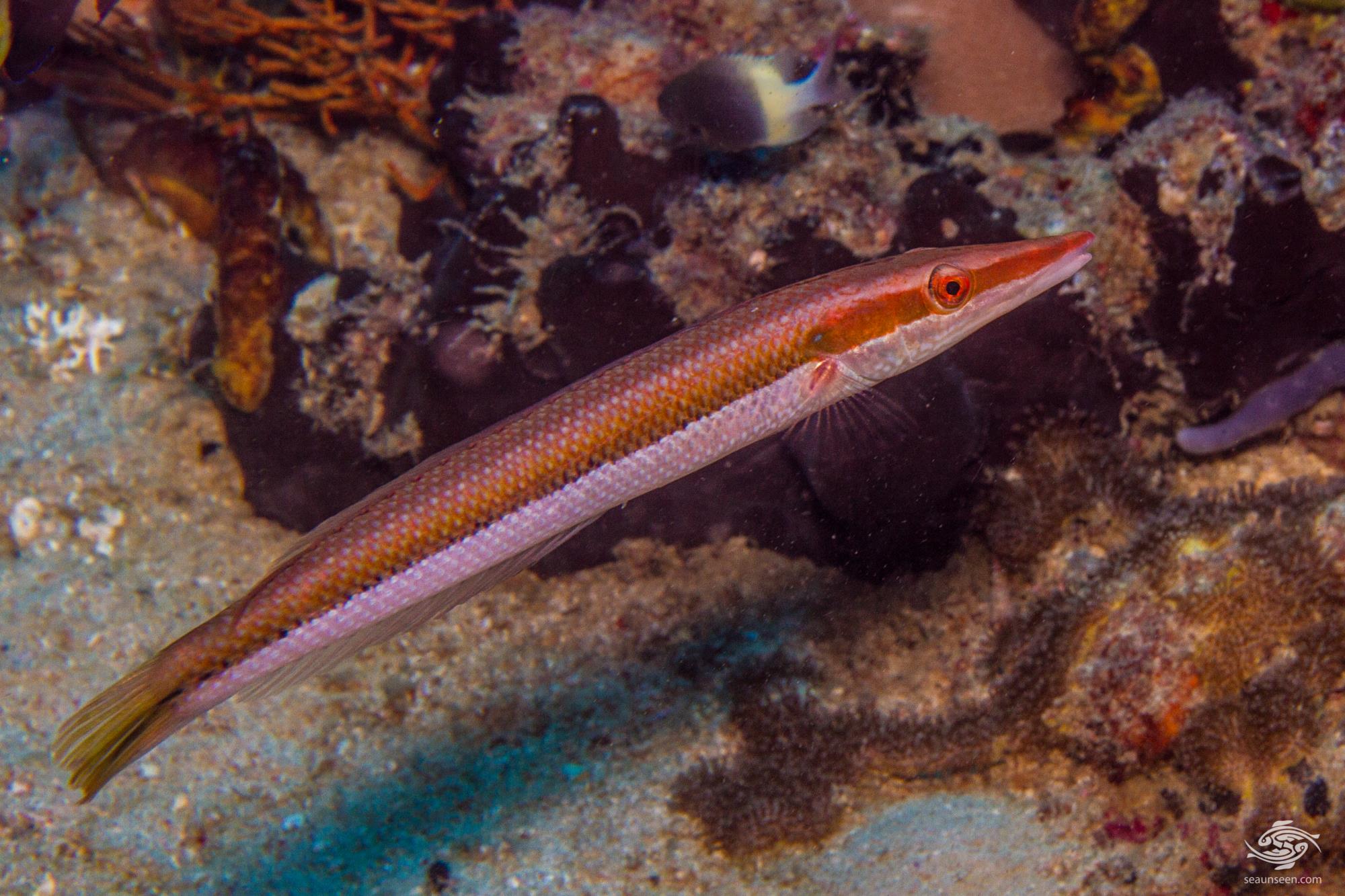 The Cigar wrasse (Cheilio inermis) is also known as the Sharp-nosed Rainbowfish, Pêche madame, Julia Larguirucha and Kamasubera. They are not a common wrasse on Tanzanian reefs but neither are they uncommon. 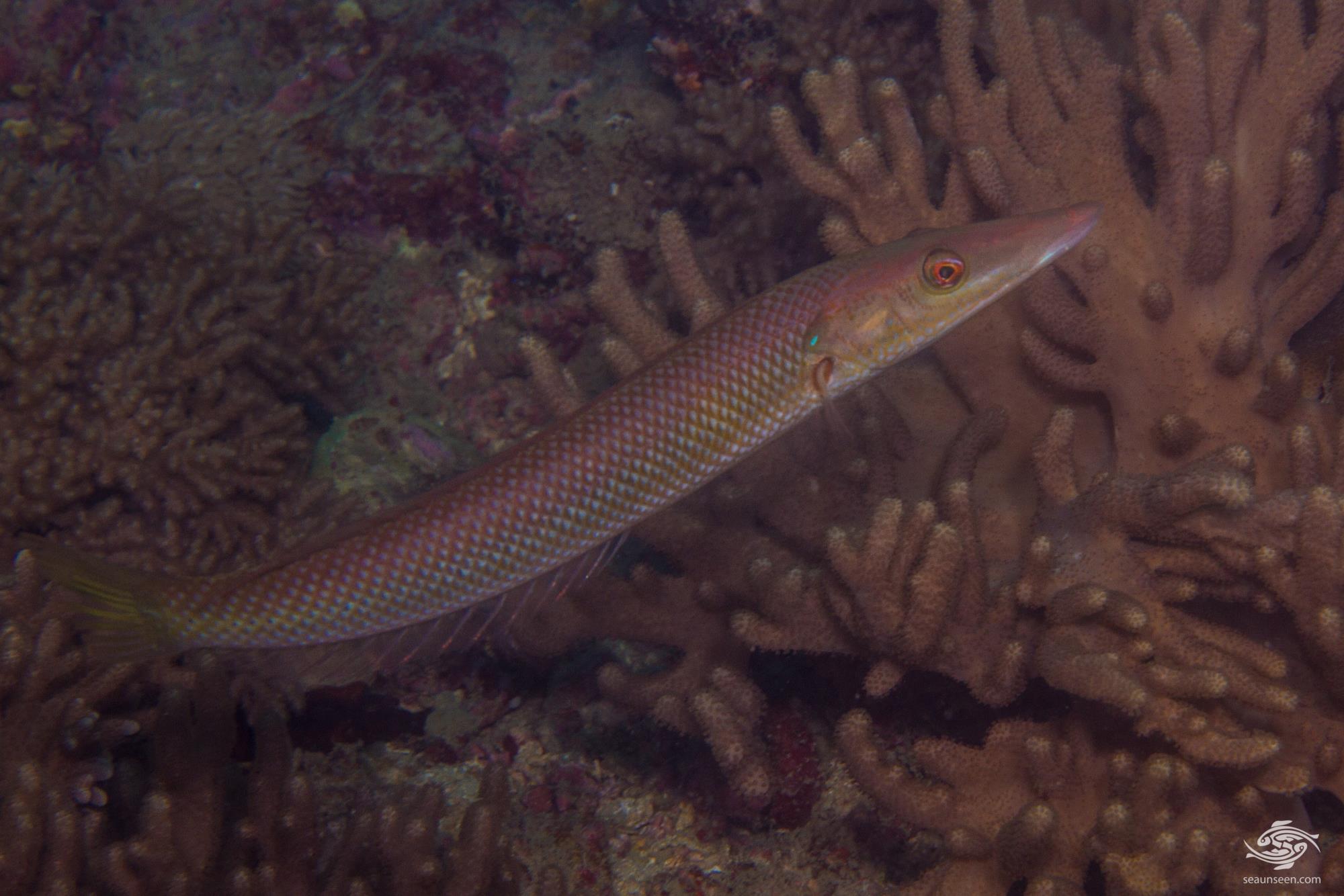 The Cigar Wrasse has a distinctive elongated cigar shaped body shape giving them their common name.  In Tanzanian waters the juveniles are a light brown color with a green-brown stripe running along the dorsal area and a thinner similar colored stripe down the side of the body.  In line with the body shape the head is long and pointed.

Some specimens are a bright yellow color and these are often seen swimming on the reef. Full grown males can reach 50 cm but it is rare to see one this size. Usually the larger specimens are in the 35 to 40 cm range. 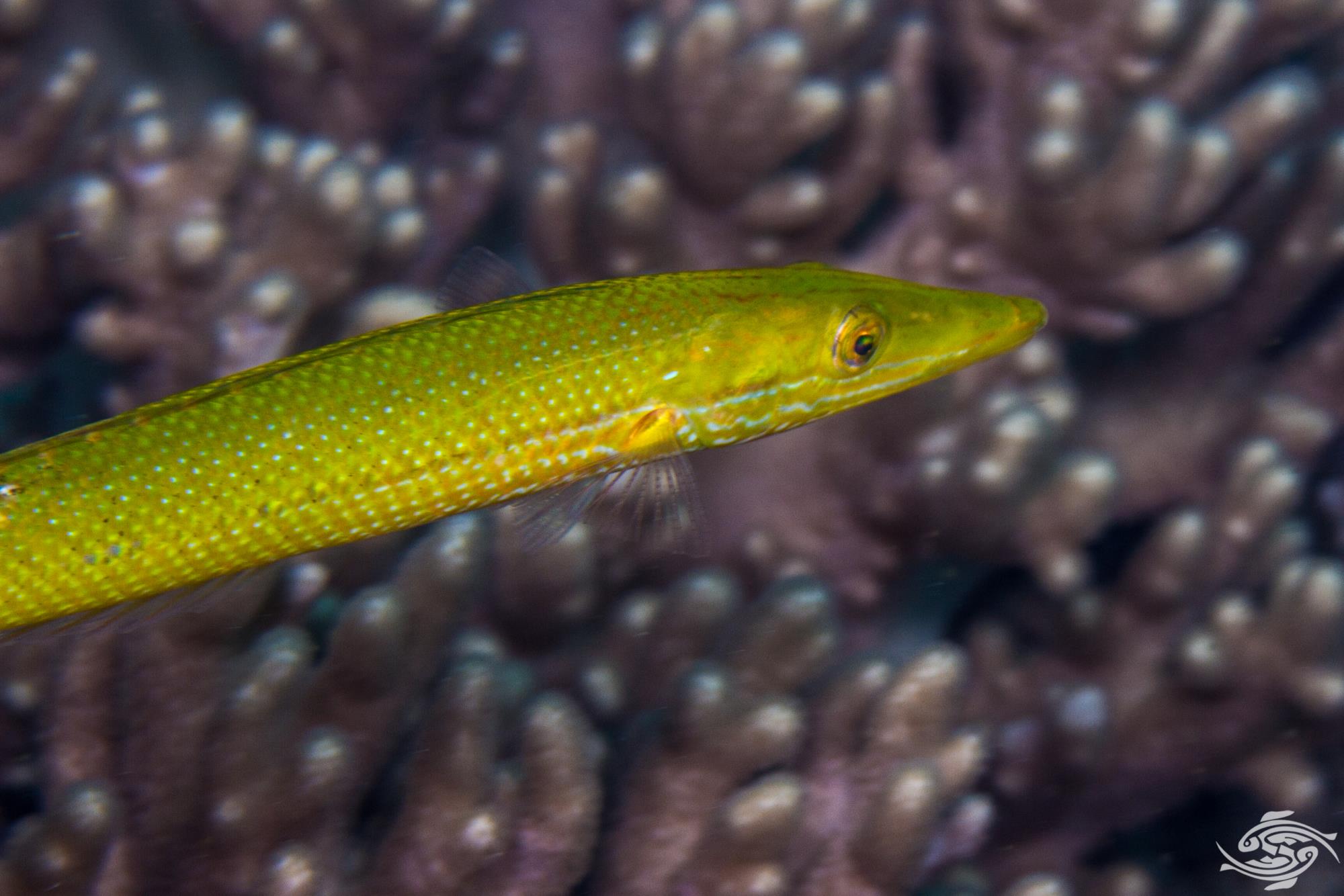 CIGAR WRASSE IN THE WILD

The Cigar Wrasse is an active fish ,  constantly swimming and feeding. The juveniles and adults are often seen on grass beds, some of which are intertidal  and the adults often come onto the reef to feed. Seagrass beds are important nursery habitats for many juvenile reef fishes and adults often migrate to the reef once they outgrow the protection of the grass. In particular on the reef, the yellow individuals often team up with yellow phase Goldsaddle goatfish and swim and feed with them. Being more conspicuous, it is easier to spot the yellow specimens from both species. This can be seen in the image below. 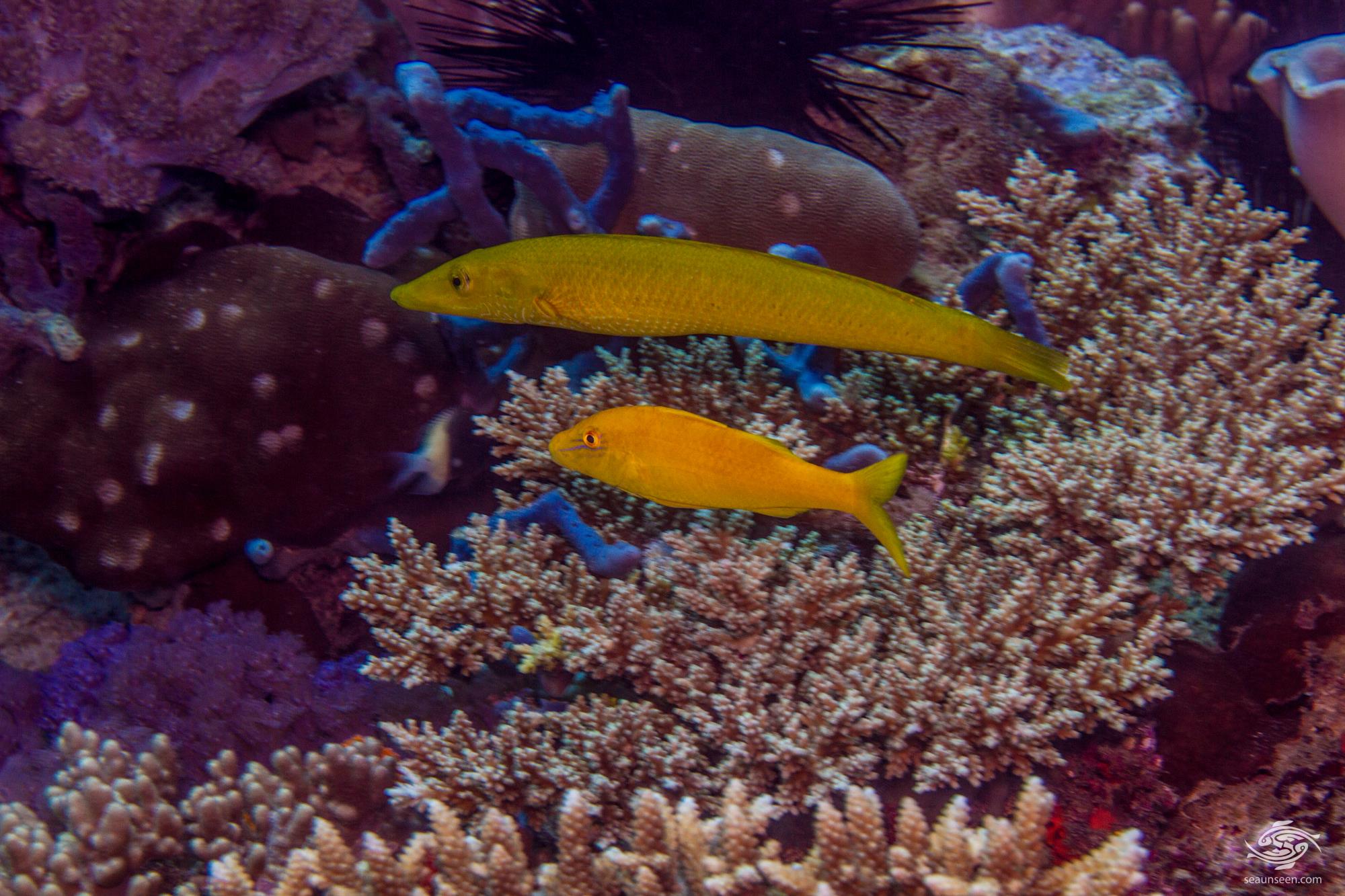 The yellow Goldsaddle Goatfish often team up in small groups of like colored specimens and swim across the reef together forming a tight group and the yellow Cigar wrasse will often join up with them even when they are much larger. 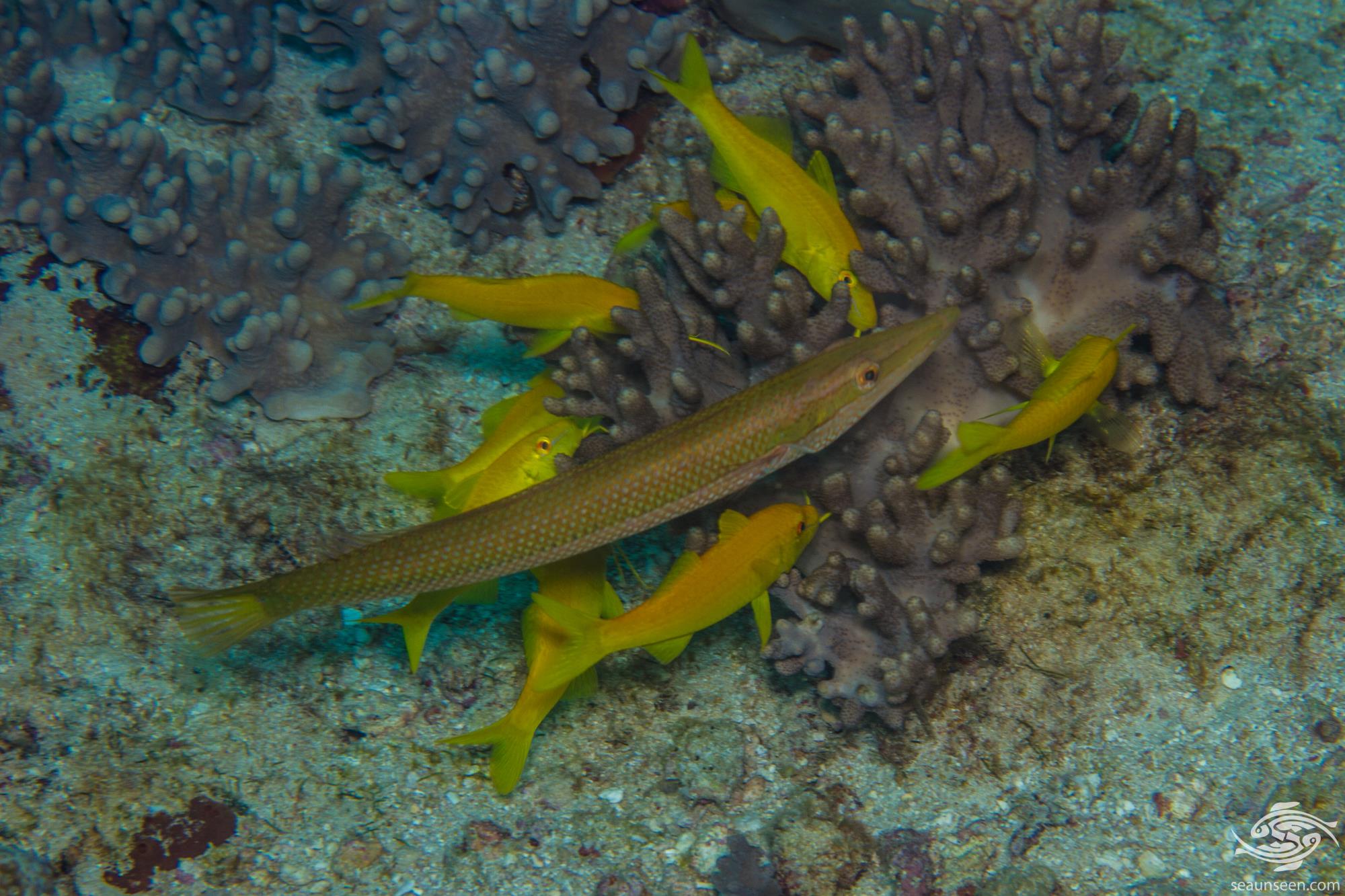 Perhaps even more interesting is that the yellow specimens seem to join up with any goatfish if there are no yellow goatfish around and will swim close to the individual it has picked out, following it across the reef.  The other color phases do not seem to do this although they will often follow other goatfish at a short distance. 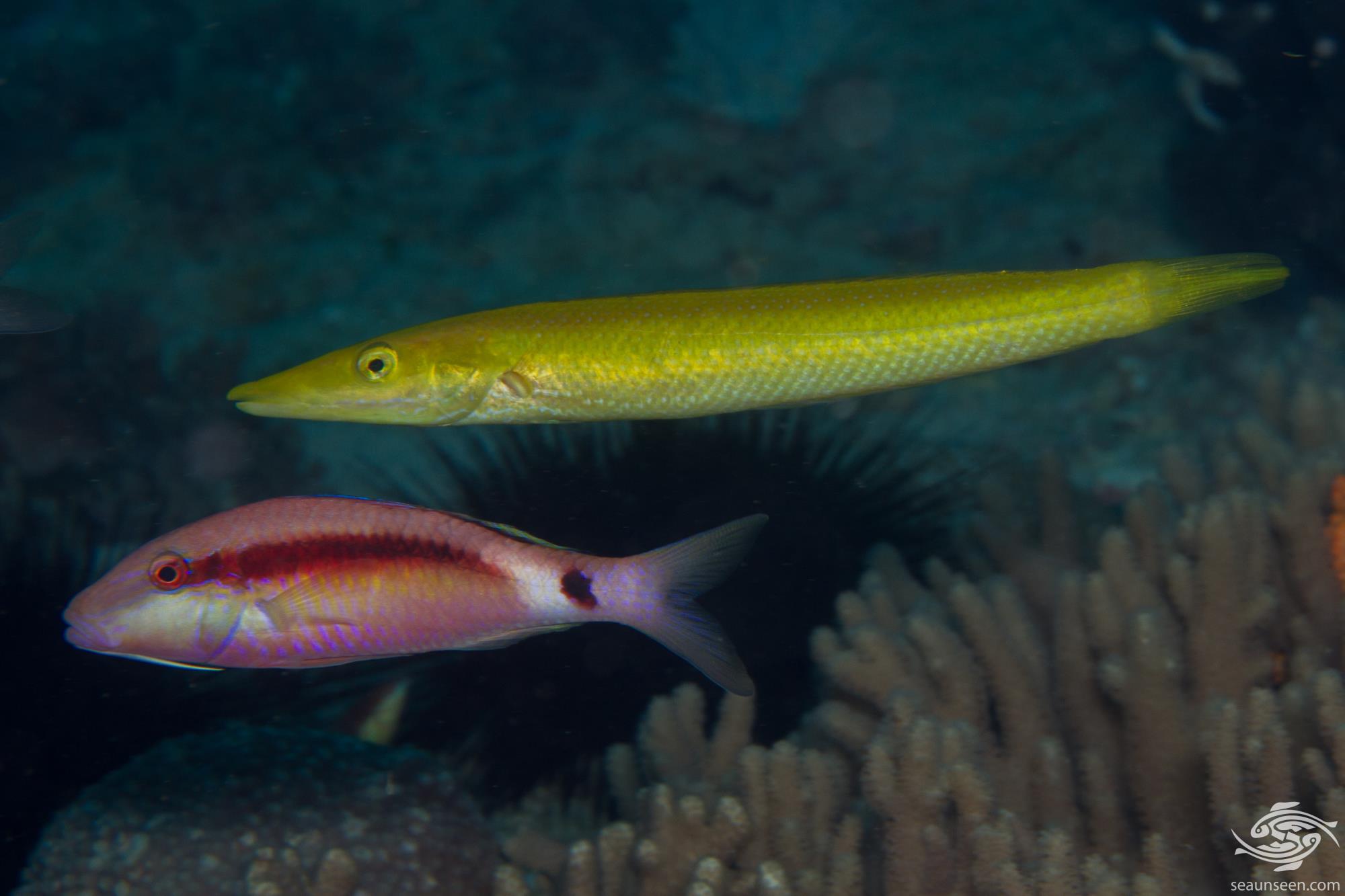 The normal colored specimens are almost always seen solitary and they are shy fish usually heading off when they see a diver. The proximity to the goatfish seem to make the yellow Cigar Wrasse less skittish.

The Cigar Wrasse  is found across the Western Indian Ocean from the Red Sea down to South Africa and across to Japan in the north, south to Australia and the Great Barrier Reef and east to the mid Pacific.  Their depth ranges from 1 to 30 meters.  In Tanzania the juveniles are common on grass beds and the adults are usually seen both on grass beds and on the reef between 10 to 18 meters.  They mainly stick fairly close to the bottom and it is not often that they are seen swimming more than half a meter above the substrate. 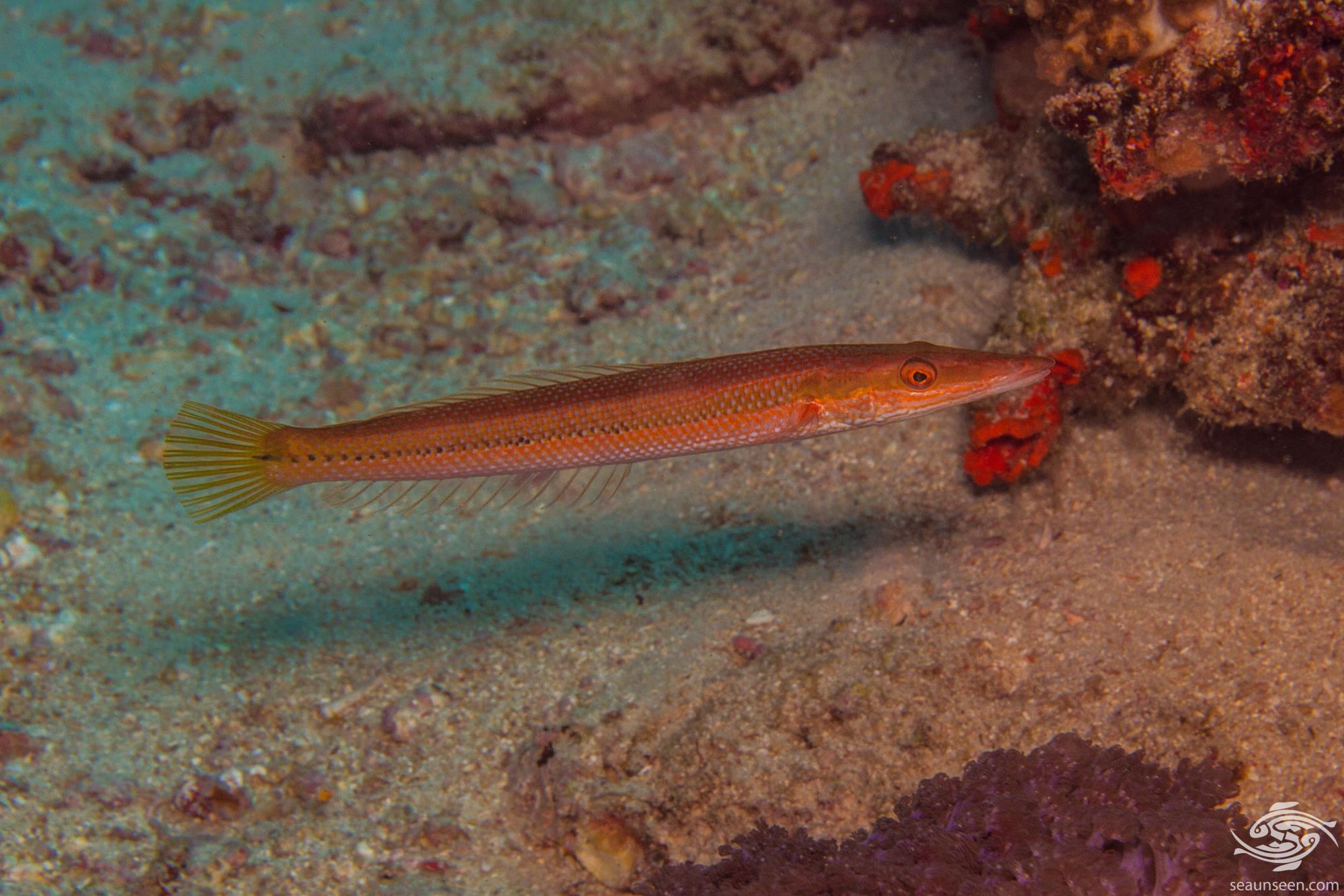 The Cigar Wrasse feeds on  crustaceans, mollusks and sea urchins. In Tanzania they are often seen feeding with Goatfish and juvenile Parrotfish.

The Cigar Wrasse is a Protogynous hermaphrodite. They first develop into females. As they age so some larger specimens based mainly on social cues transform into males. Little is known of their breeding habits but they are known to form breeding aggregations. 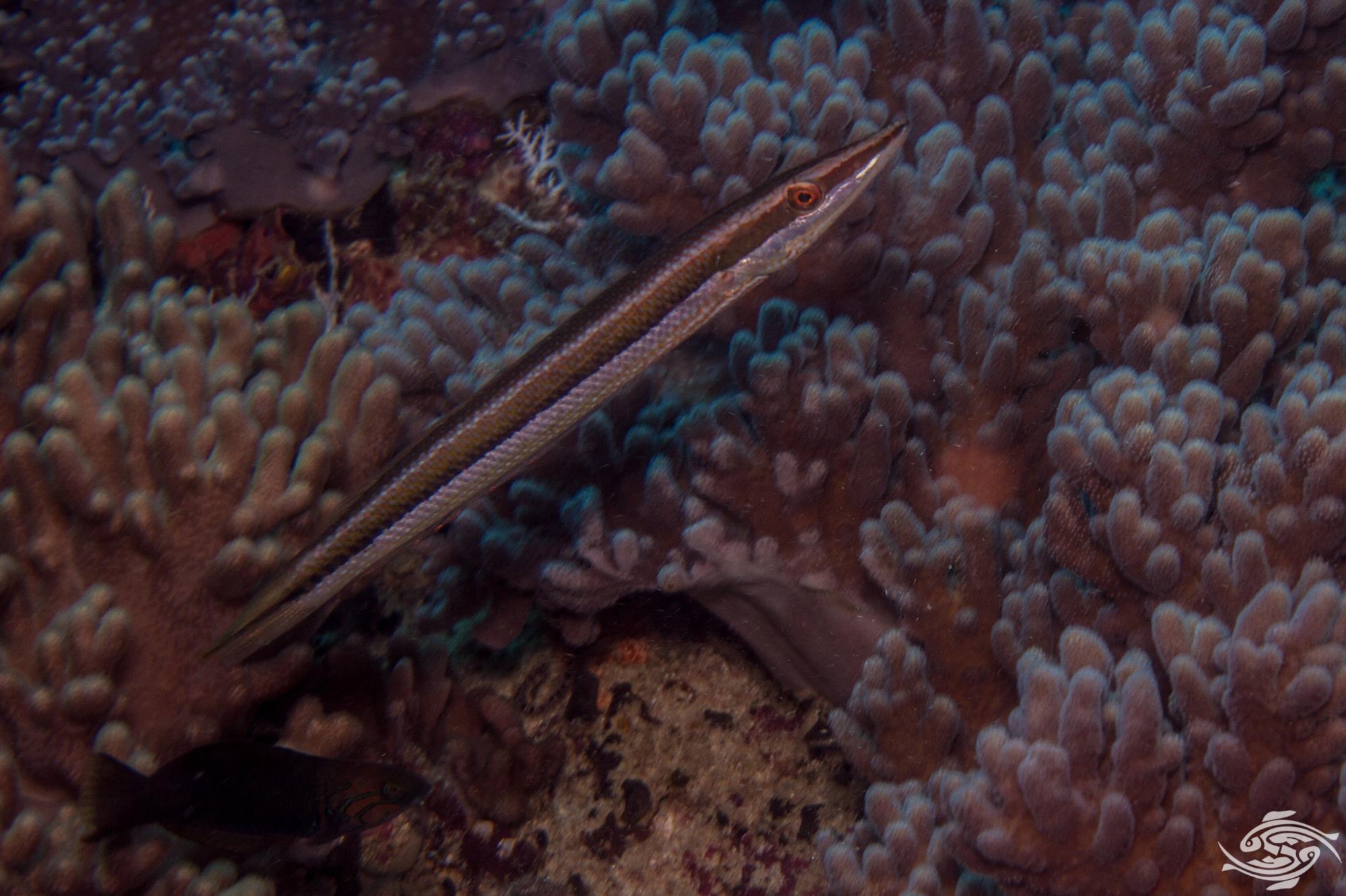 Cigar Wrasse grow up to 50 cm which precludes them from being kept in most aquariums. They will almost certainly jump and a well secured cover would be a necessity. These fish could really only be suitable for very large fish only aquariums.