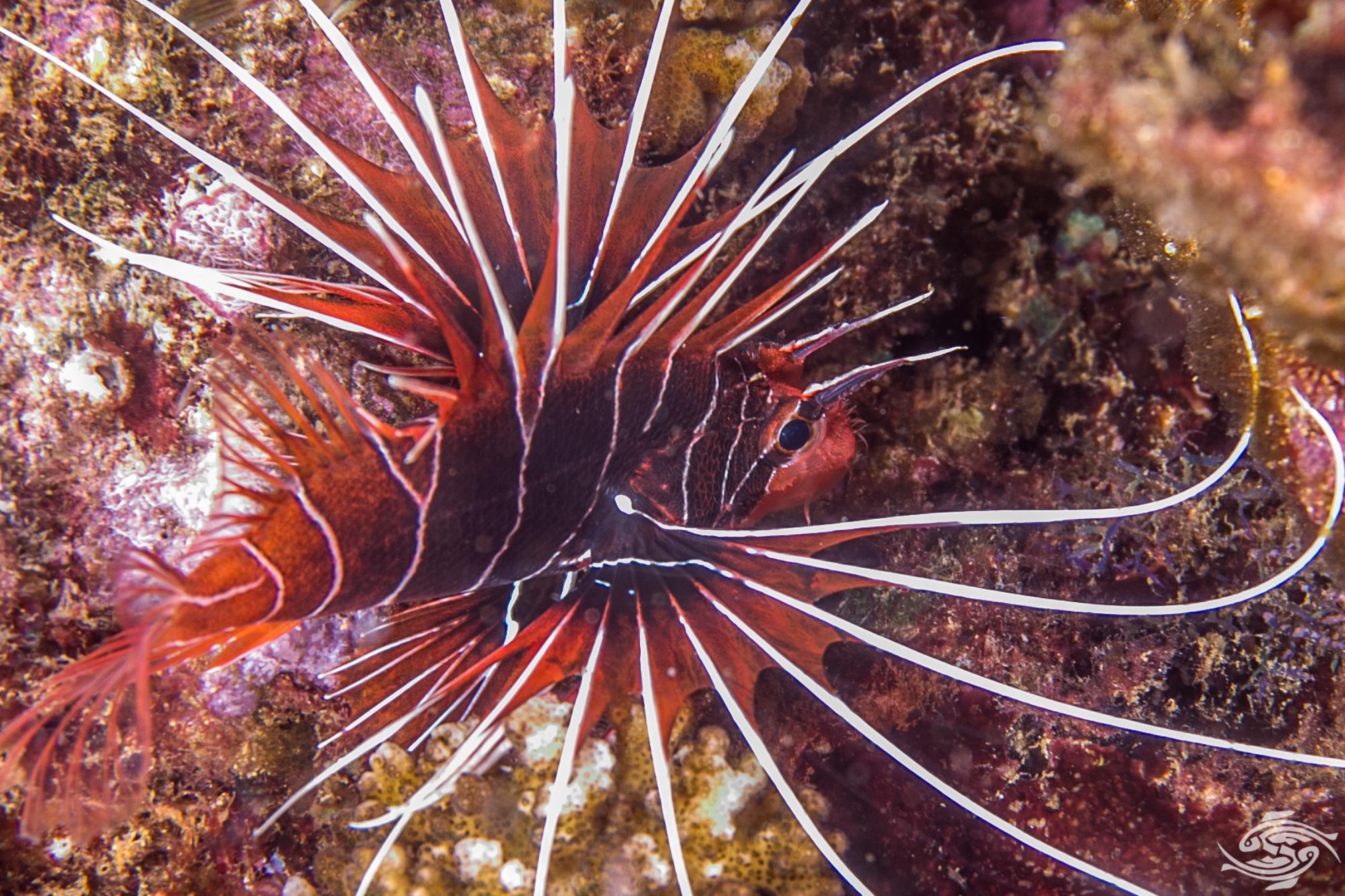 The Clearfin lionfish (Pterois radiata) is also known as the Radial   lionfish or Tailbar Lionfish. They are a fairly reclusive fish and are not commonly seen out during the day.  One can often see their distinctive long thin pectoral rays sticking out of a crevice but it is not often that one sees the whole fish during the day. 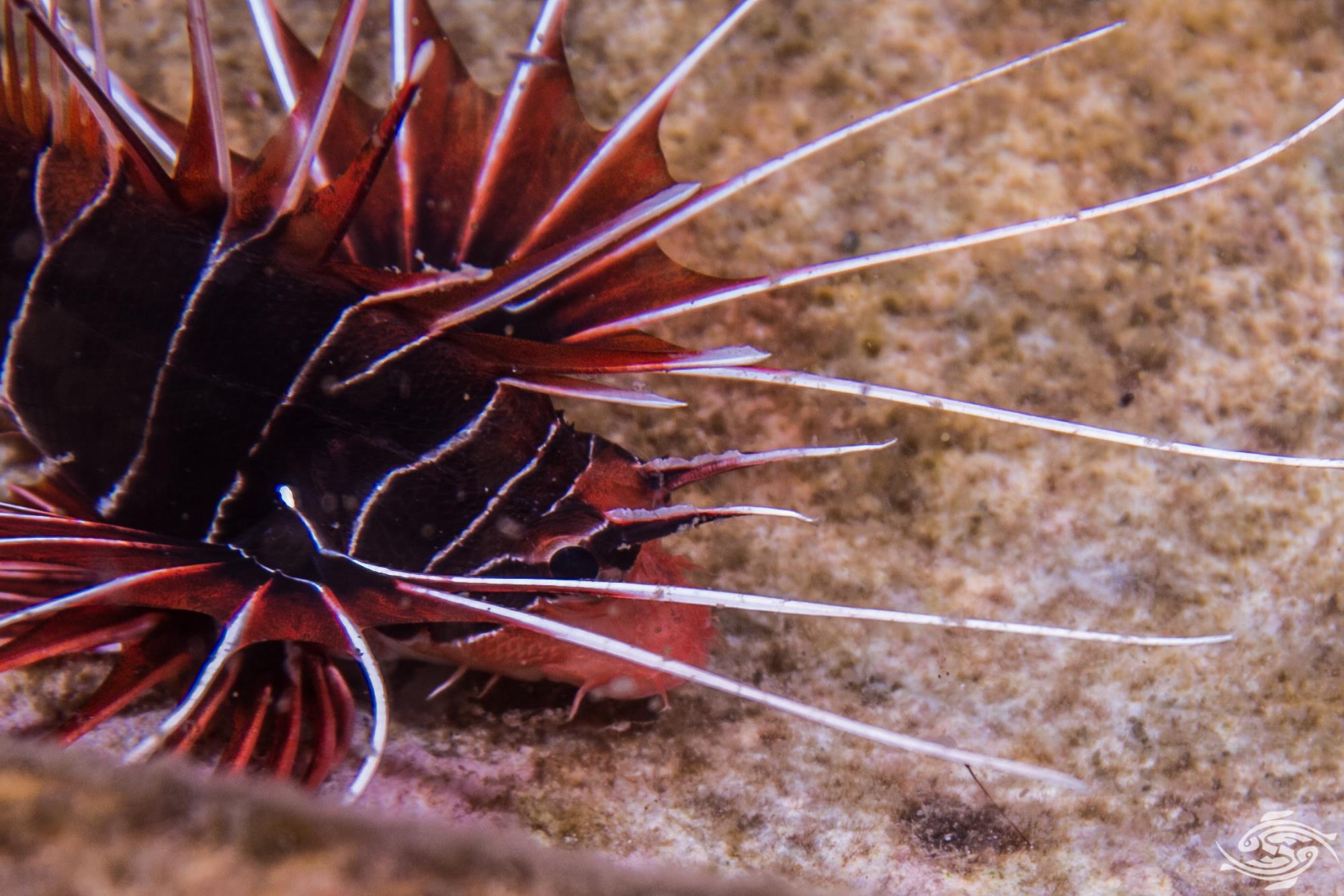 The Clearfin Lionfish is a distinctive looking lionfish and easy to distinguish from the other lionfish species. The body colour is a red brown colour with thin white vertical stripes. The body colour lightens towards the head and tail. On the tail there two horizontal white stripes, which give it its name of Tailbar Lionfish in some areas. On the head there is a distinctive darker bar which runs up through the eye onto the antennae at a 45 degree angle. 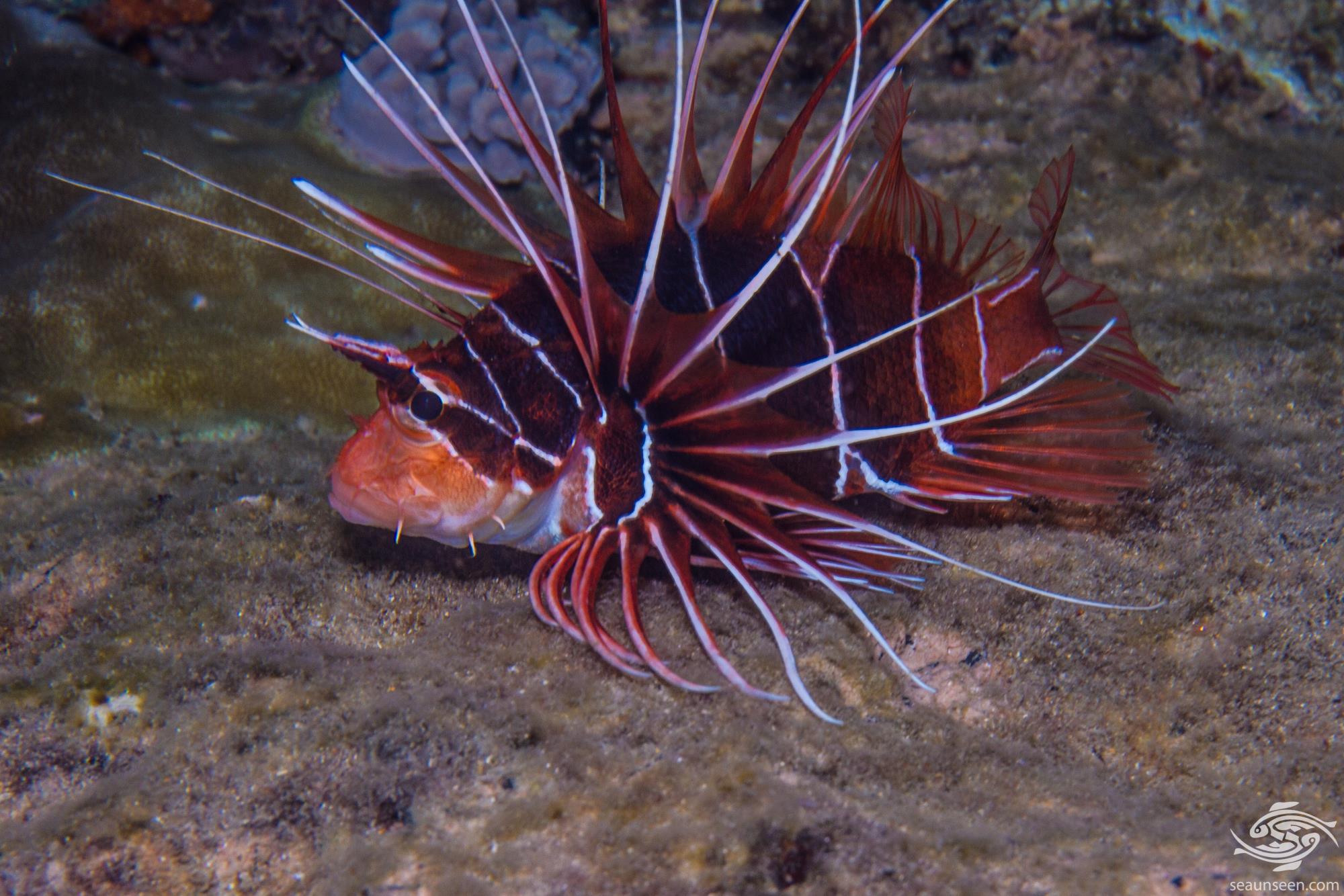 The Pectoral fins are a red brown colour and have no markings on them. The rays of the pectoral fin are proportionally long and white. As their name implies, the caudal fin is  transparent with the rays being a light red brown colour. Clearfin Lionfish grow up to 20 cm centimeters in length. 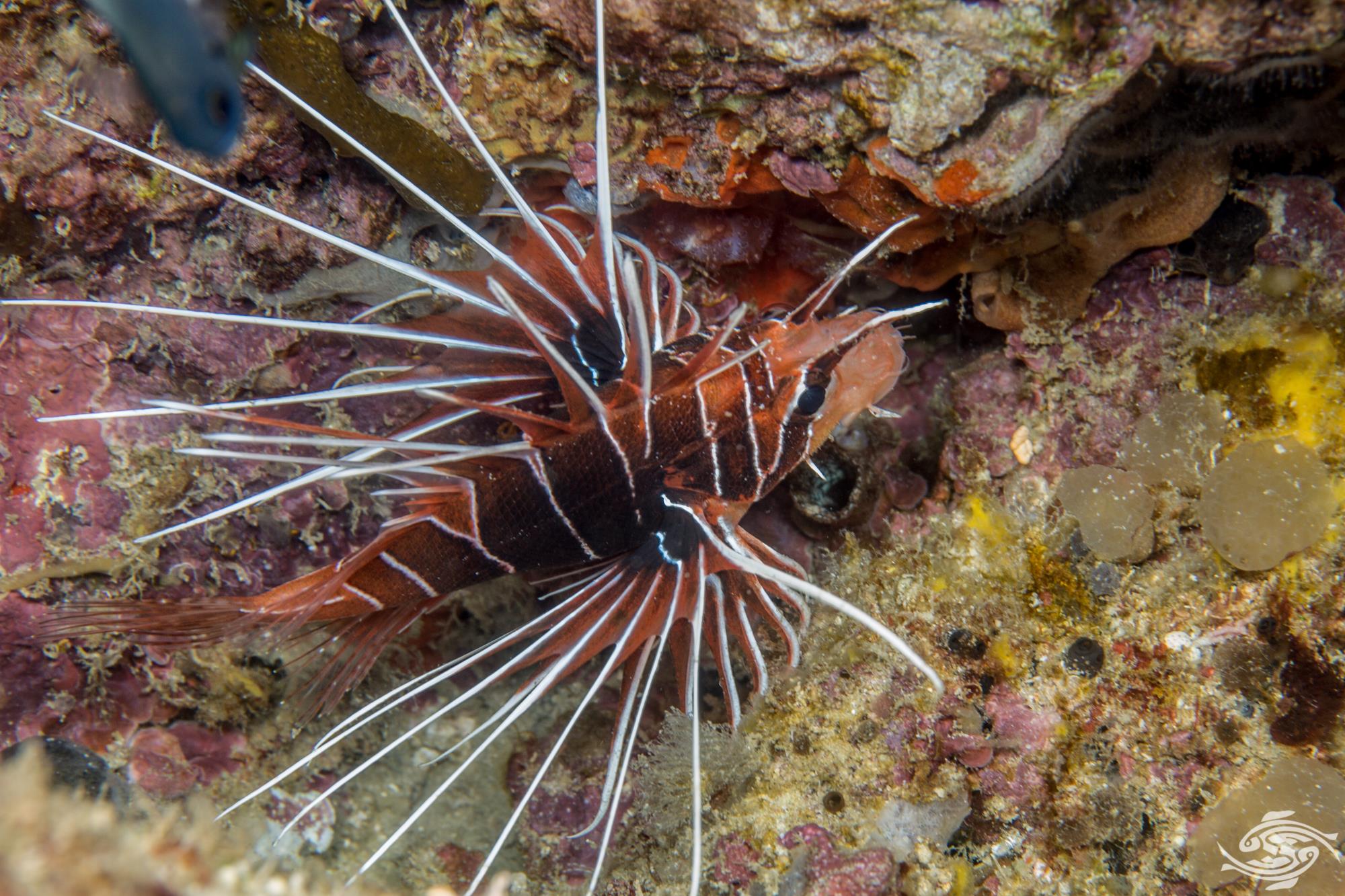 The Clearfin Lionfish are generally quite shy and will usually retreat from a diver. This makes it quite difficult to photograph them. During the day they are usually seen hiding in small caves, inside barrel sponges, under overhangs or in crevices. They are seldom seen out in the open during the day. At night they are seen out in the open hunting. They will often be near features with many small fish such as sweepers and cardinalfish.

They are usually seen solitary but occasionally they are seen in small groups of up to three or four which appear to be interacting in some way . These groups are usually seen in spring and early summer so the behavior may be mating related. 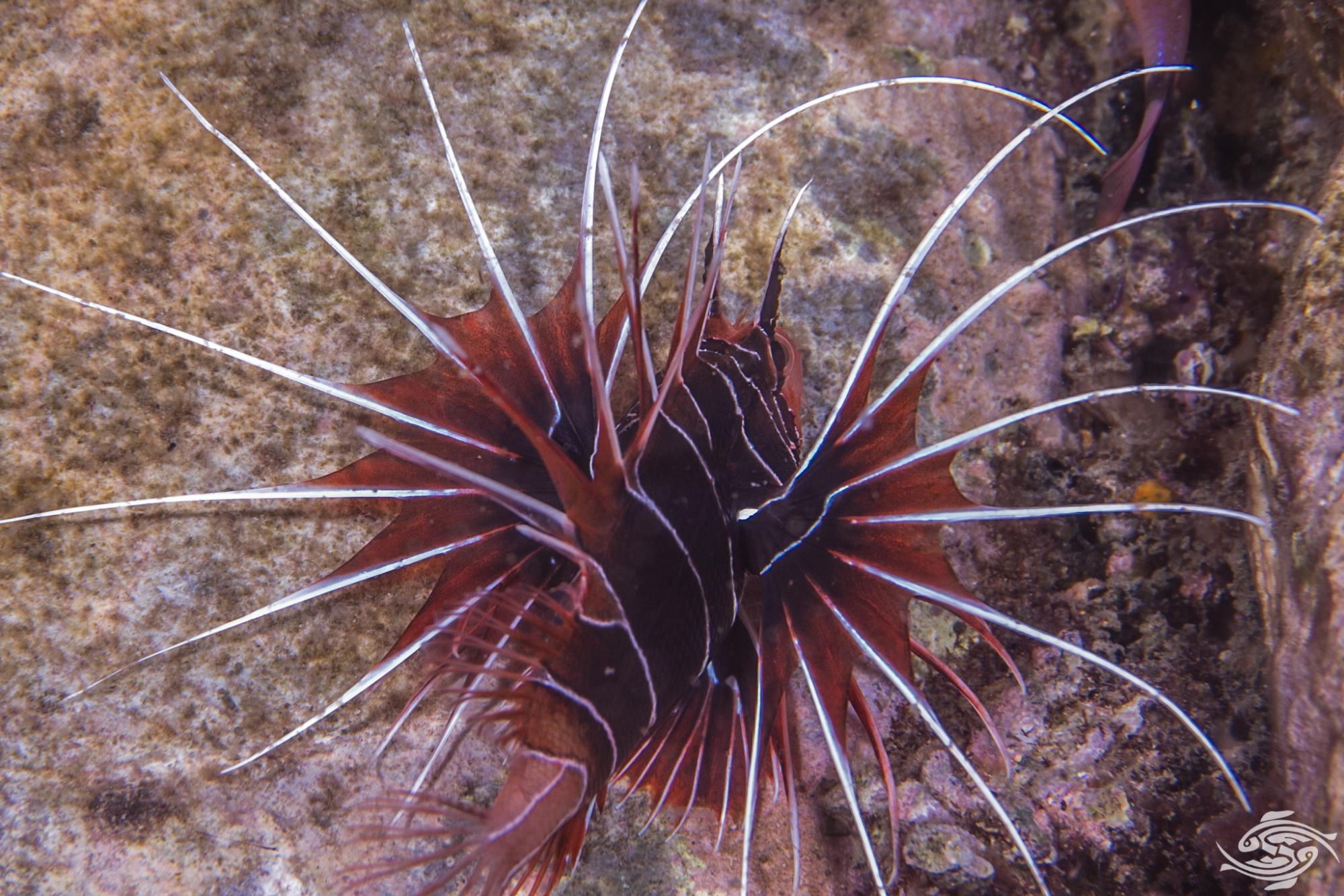 Clearfin Lionfish are found across the Indo Pacific area.  ocean, all the way up the East coast of Africa to the Red sea and across to Japan and northern Australia. They are usually found on reef tops ranging from between 12 meters to 25 meters in Tanzania. 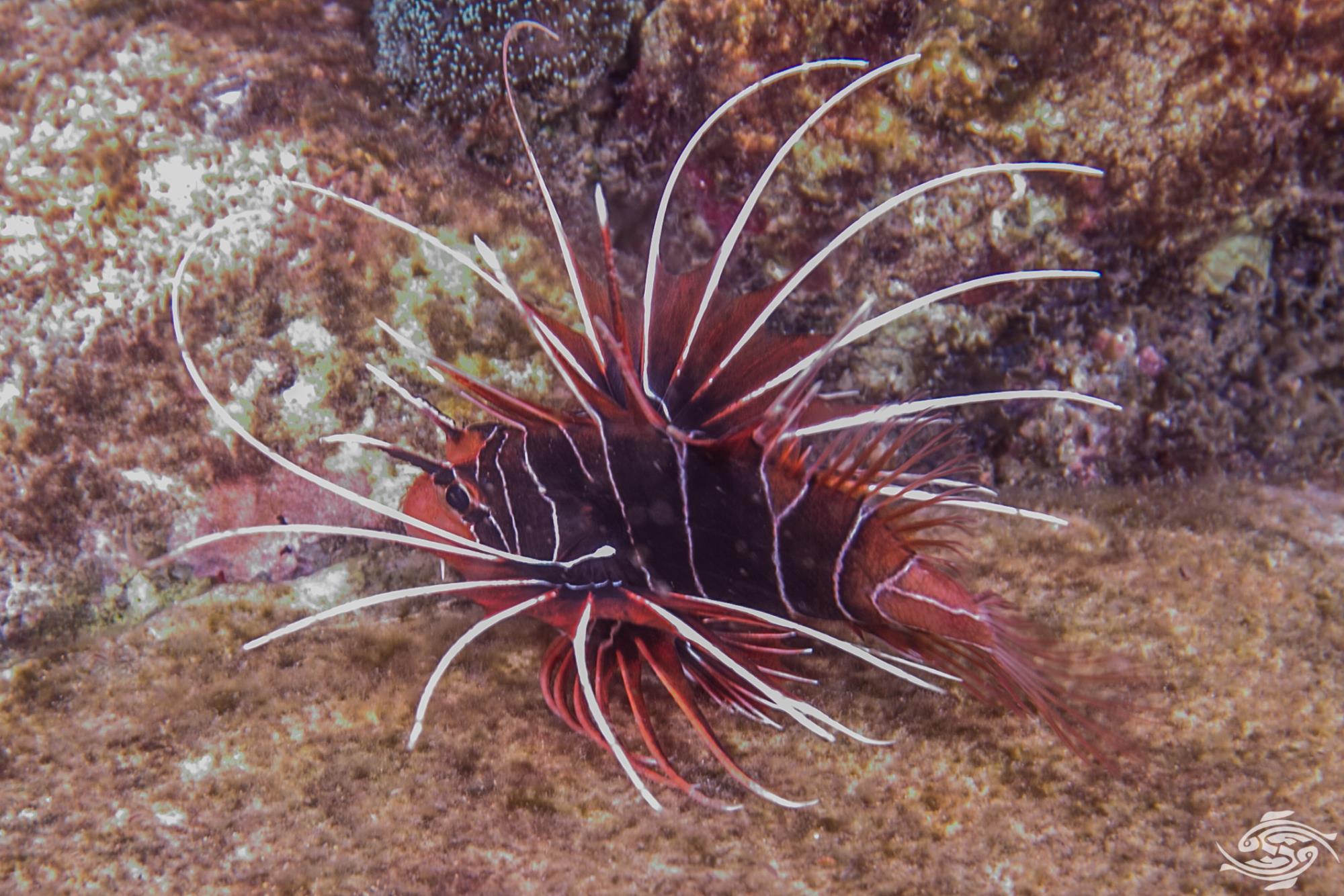 Clearfin Lionfish prey on small fishes and crustaceans and pretty much anything that fits in their mouth. They use their proportionally large mouths to create a vacuum and suck in and swallow the prey. 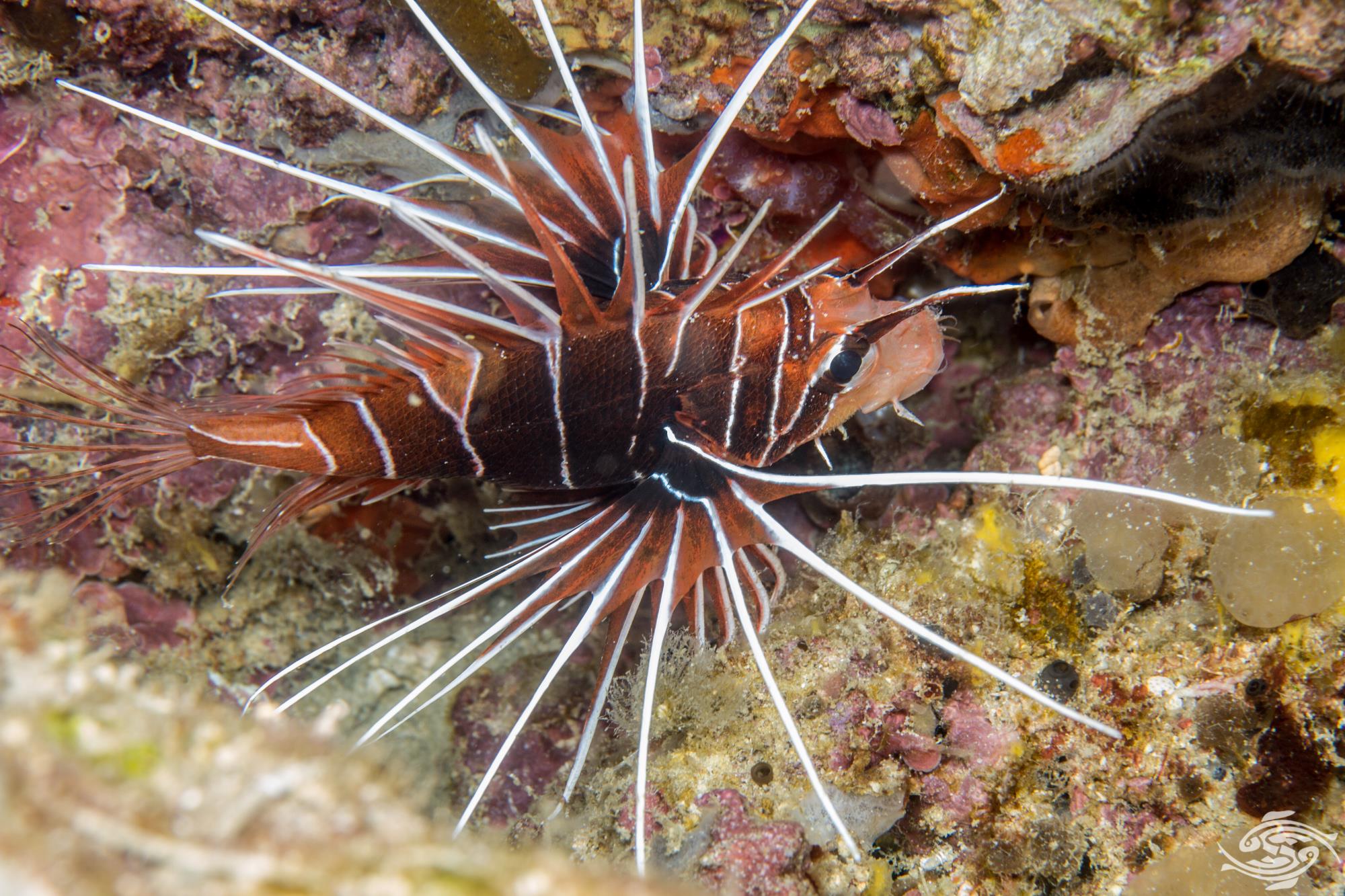 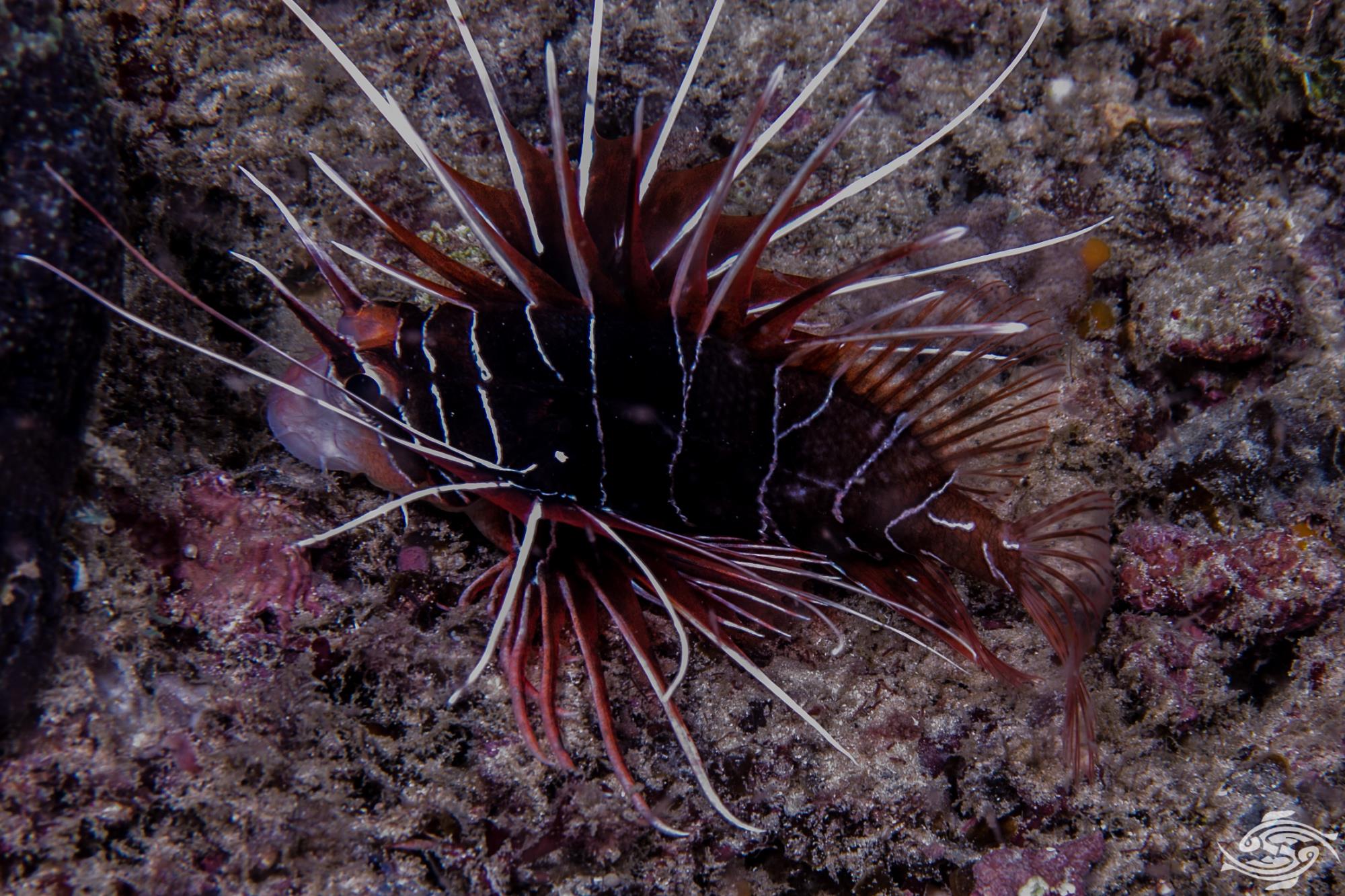 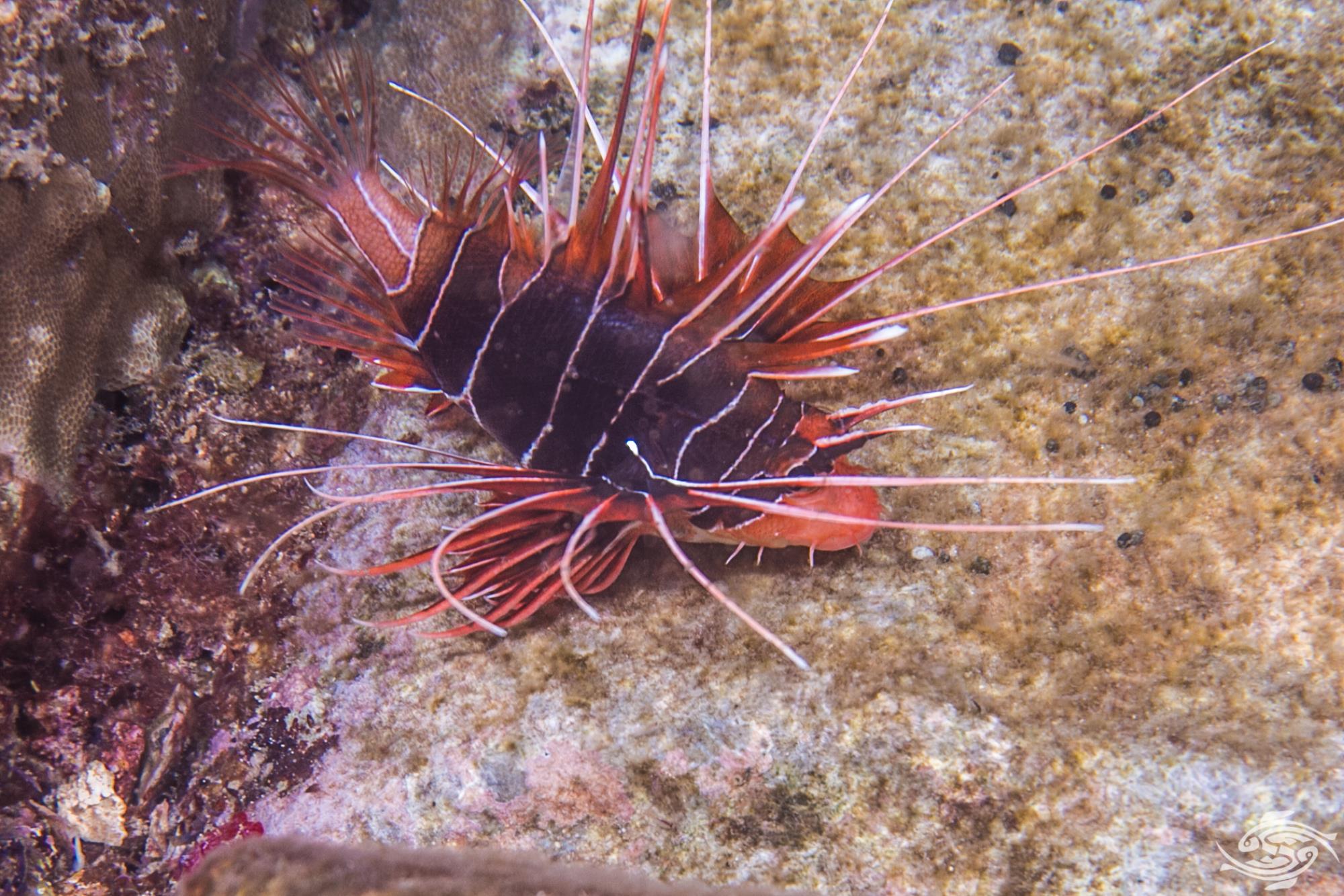 Clearfin Lionfish are kept by some collectors and make an attractive feature in the right type of aquarium. They will eat anything that fits in their mouths and will occasionally try their luck with things that will not fit in if they are hungry enough. As a consequence care has to be taken in choosing their tank mates. They are relatively easy to get across onto prepared foods. 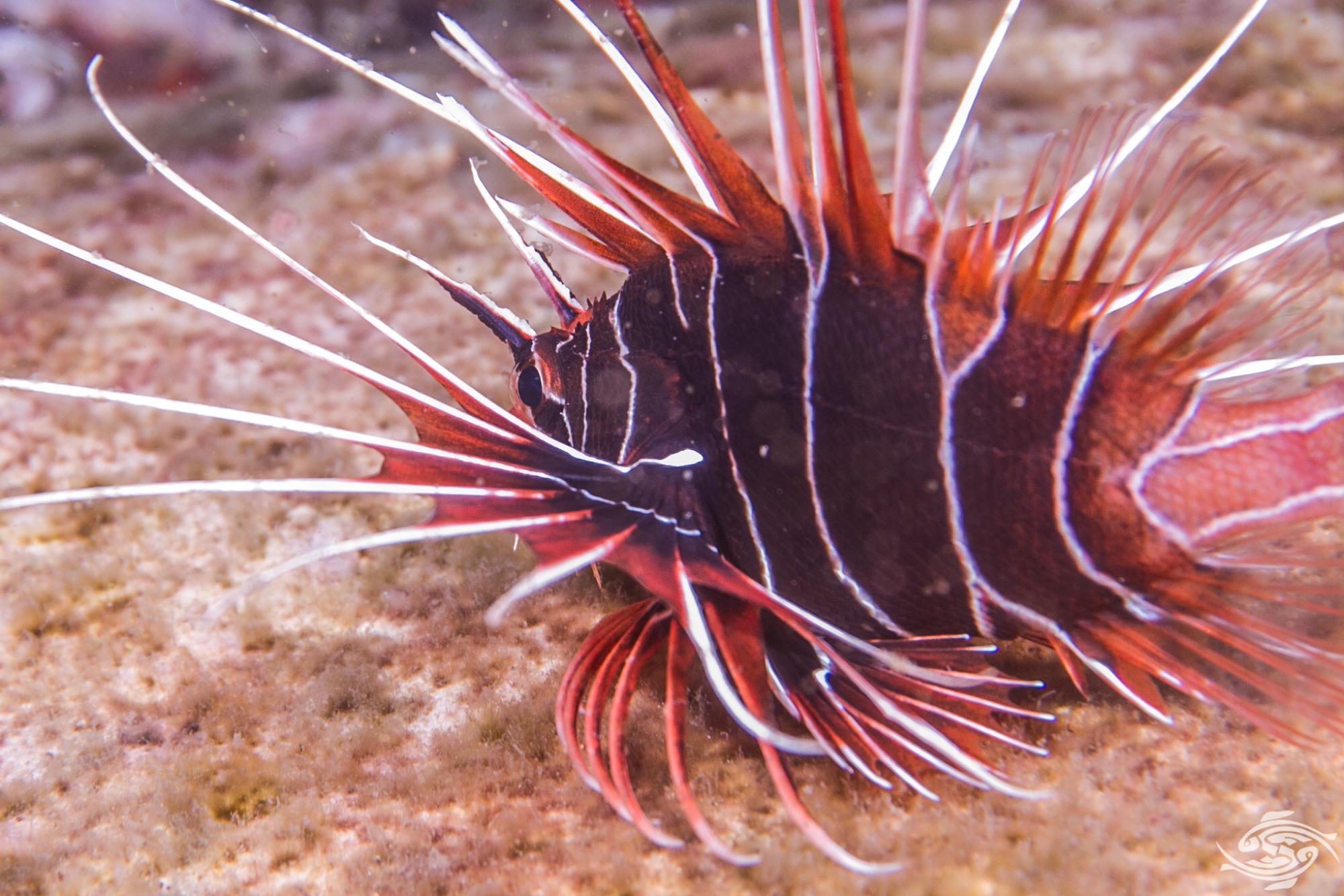 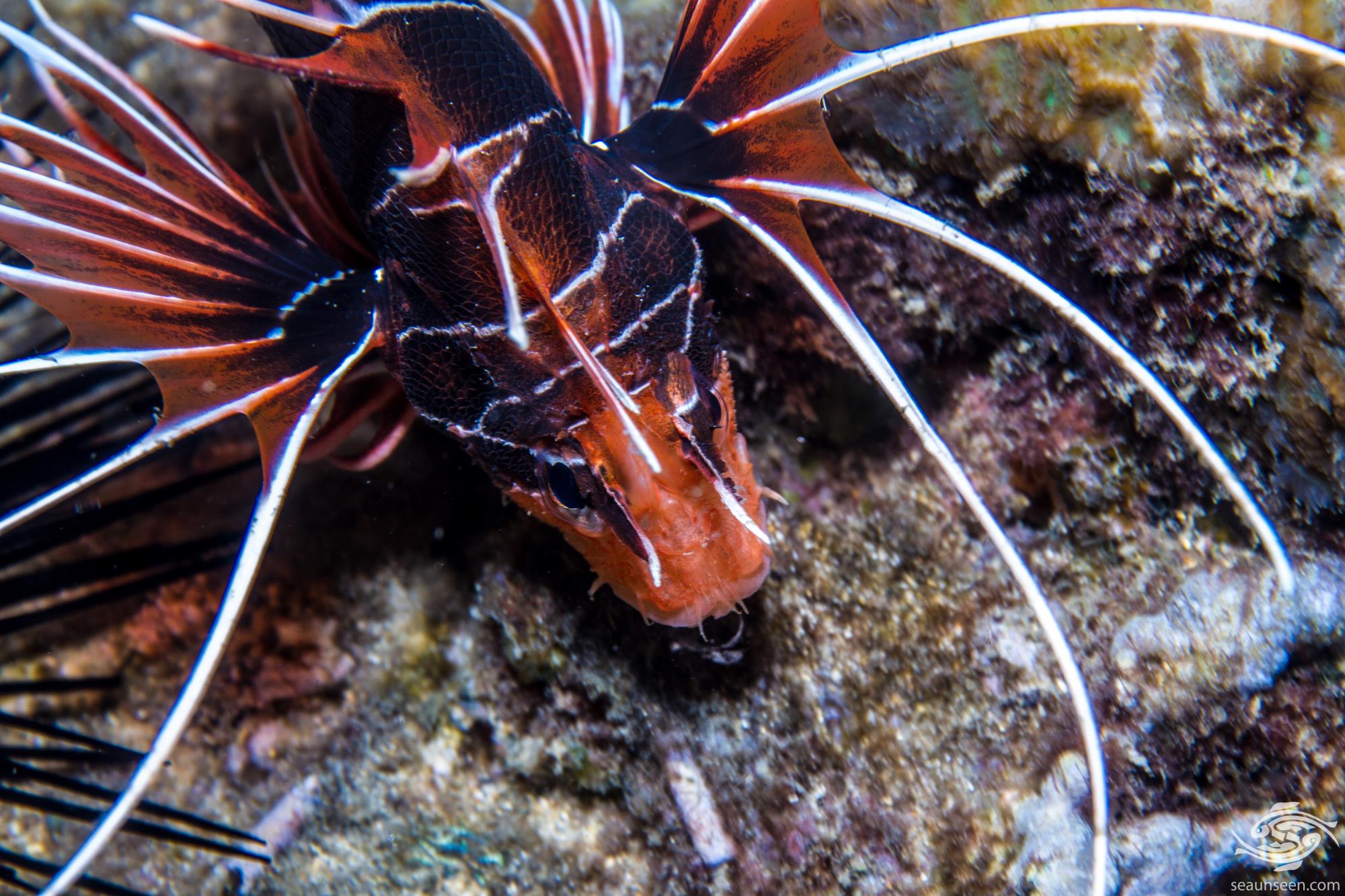 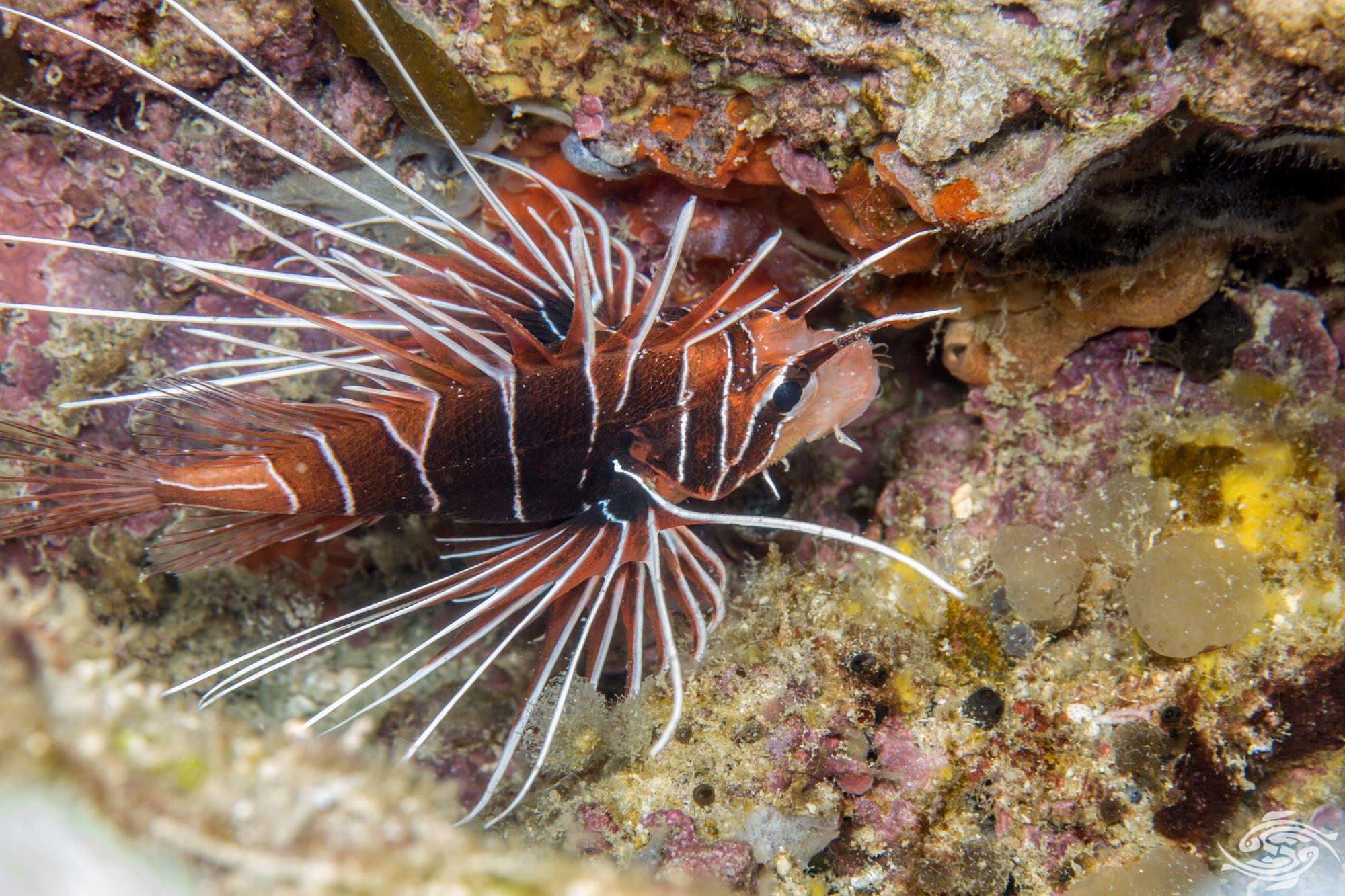