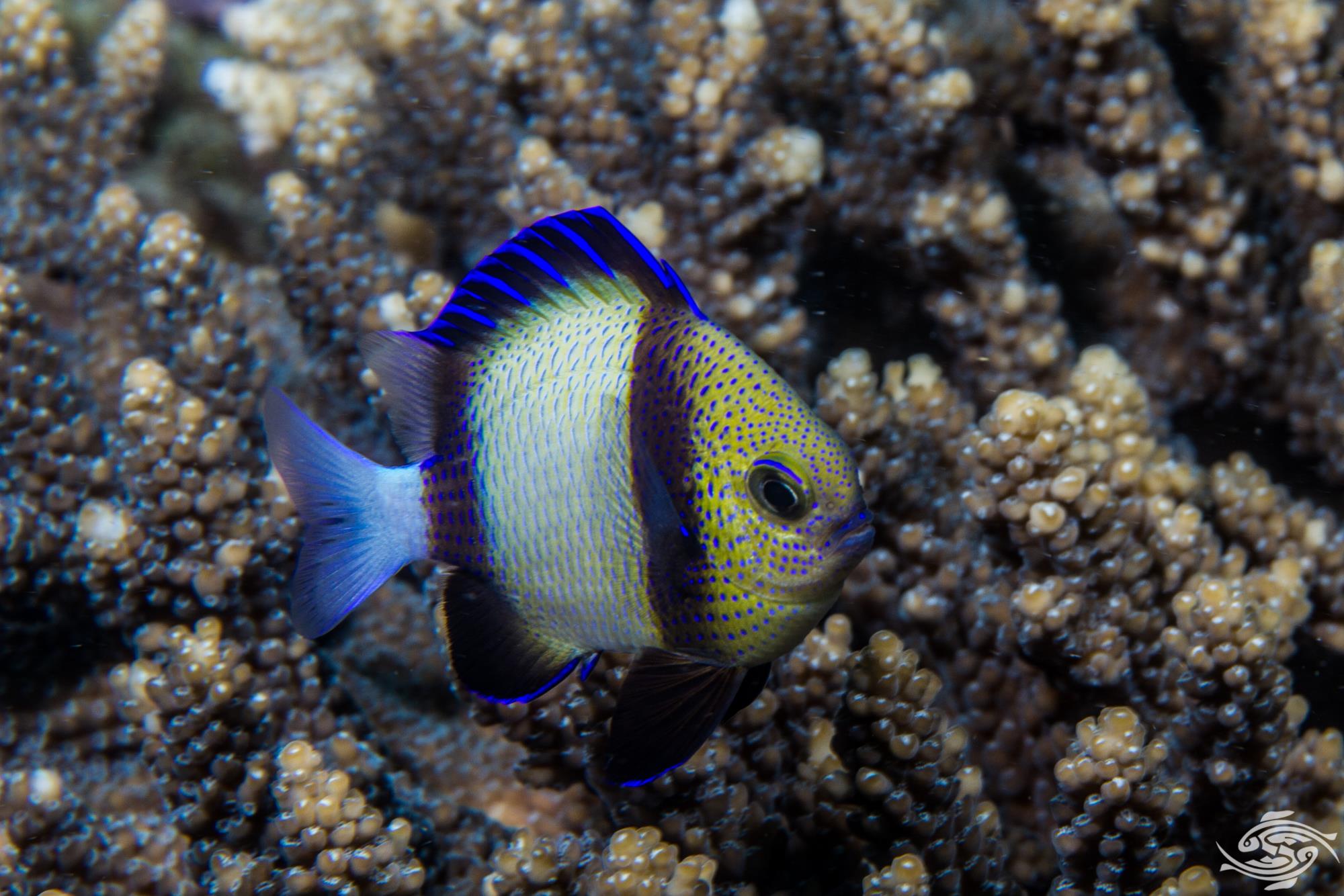 The Cloudy dascyllus, Dascyllus carneus is also known as the Two bar Humbug or Indian dascyllus. They are commonly found in small shoals over branching corals. 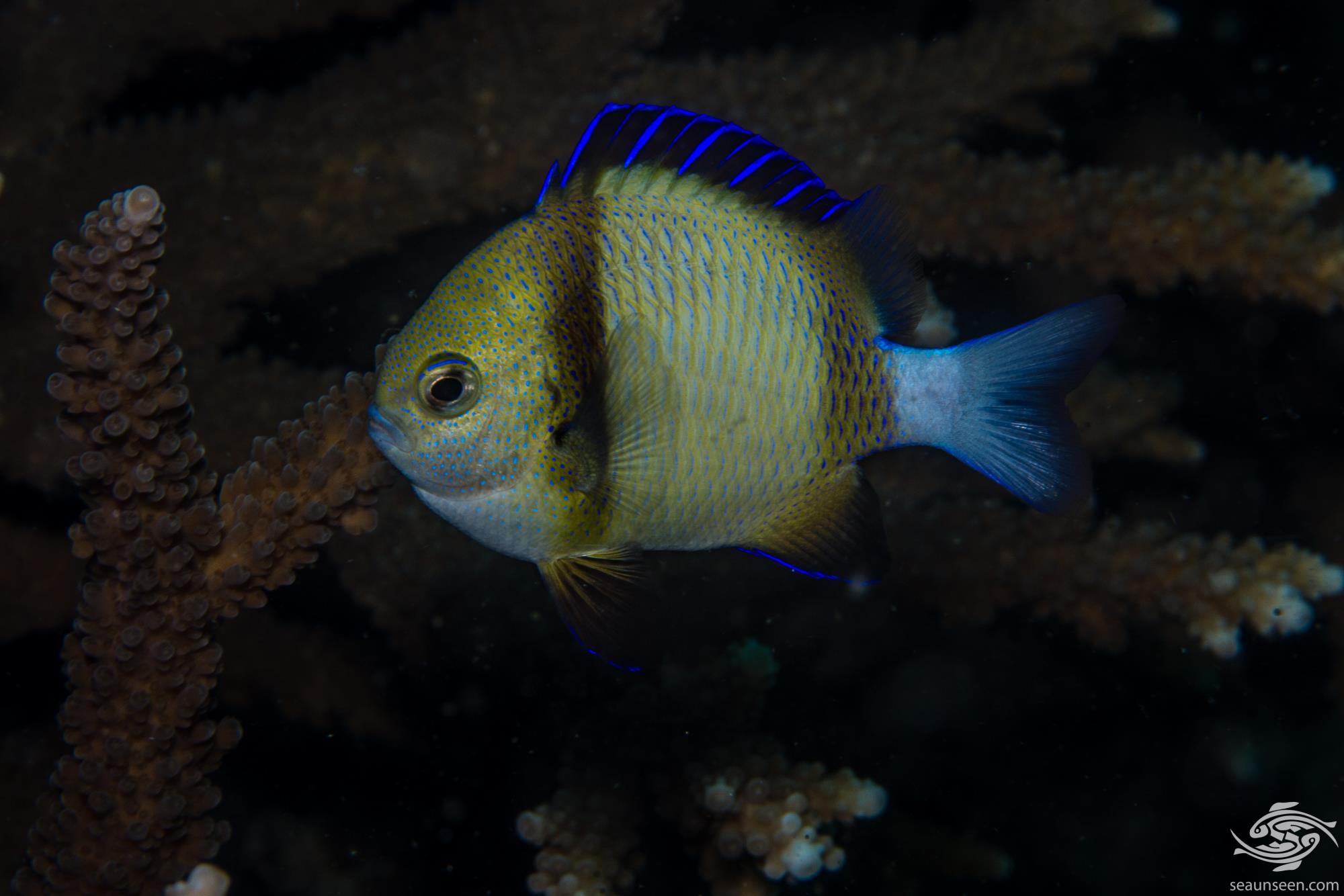 There is little variation in coloring between the juveniles and the adults.  The body has an oval shape with a rounded nose. The base color of the body is white and there are two vertical bars, one at the start of the dorsal fin and the other in the caudal area. The nose area has a yellowish tint to it which varies in intensity from specimen to specimen. The dorsal fin is black with the spines edged in blue.

The blue on the dorsal fin varies considerably from area to area and in some areas is more of a purple blue and in others a dull blue. On a small coral head in the Mafia channel I found some that had bright purple markings rather than blue, which initially made me wonder if they were a new species. The anal and pelvic fins are black edged in blue and the pectoral fins are transparent. The caudal fin is white.  The lighter colored scales on the body and face have blue lines or dots on them giving them an overall attractive appearance. They grow up to 7cm in length. 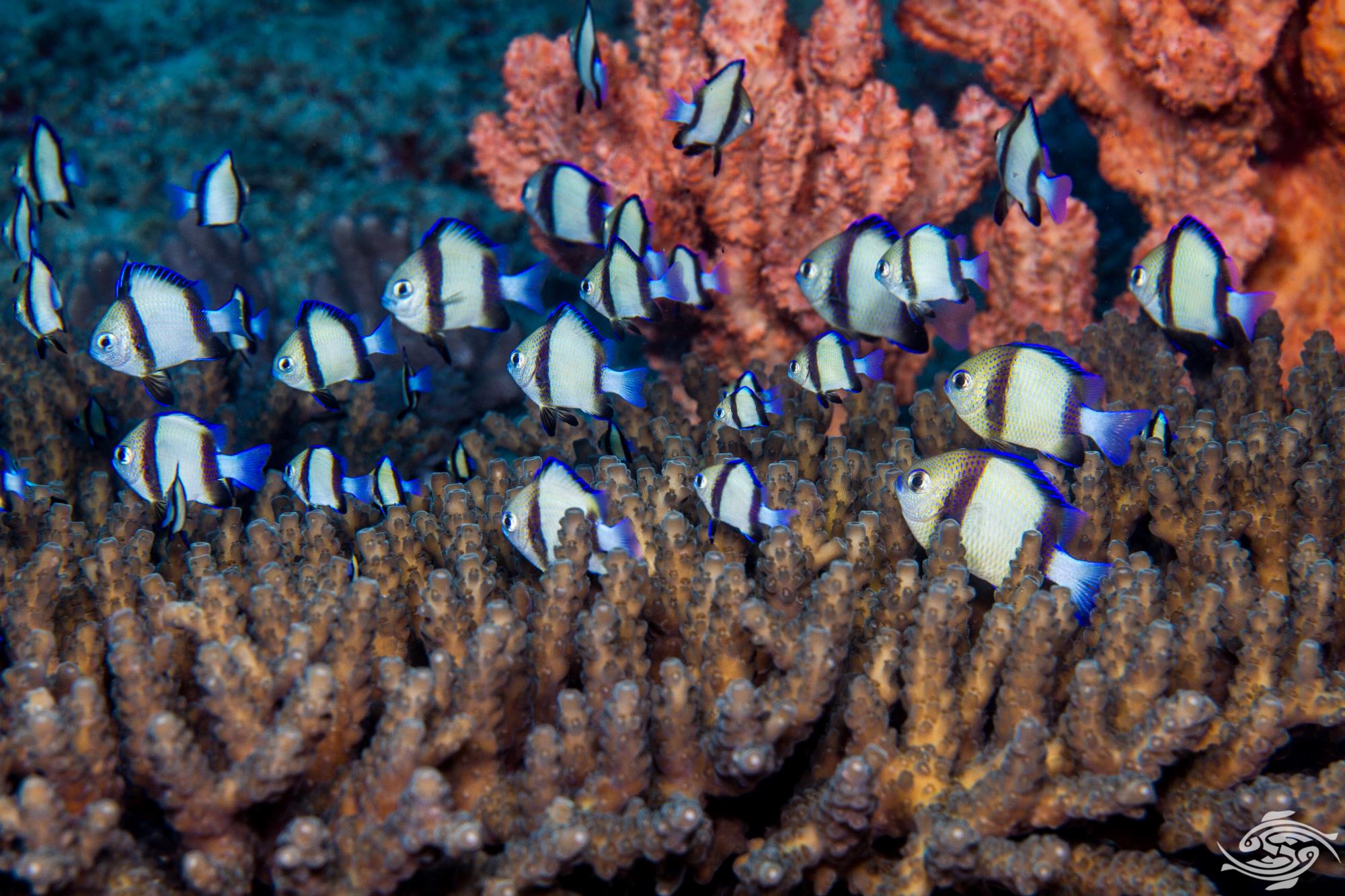 The Cloudy dascyllus are almost always seen in small shoals around a branching coral, usually in Tanzania of the Acropora species. The shoal will disappear into the coral and hide at the slightest hint of danger. Often they emerge at the same time and the sight of the shoal disappearing and appearing can be quite attractive.  They are territorial and will dart towards a larger fish that comes near their piece of coral.

At night they shelter in the branches of the coral for protection. I used to think they were pretty invulnerable sheltered in the coral branches. On one night dive I watched and filmed a Broadclub cuttlefish sitting on top of a coral head pulling all the fish out from between the branches and snacking on them. 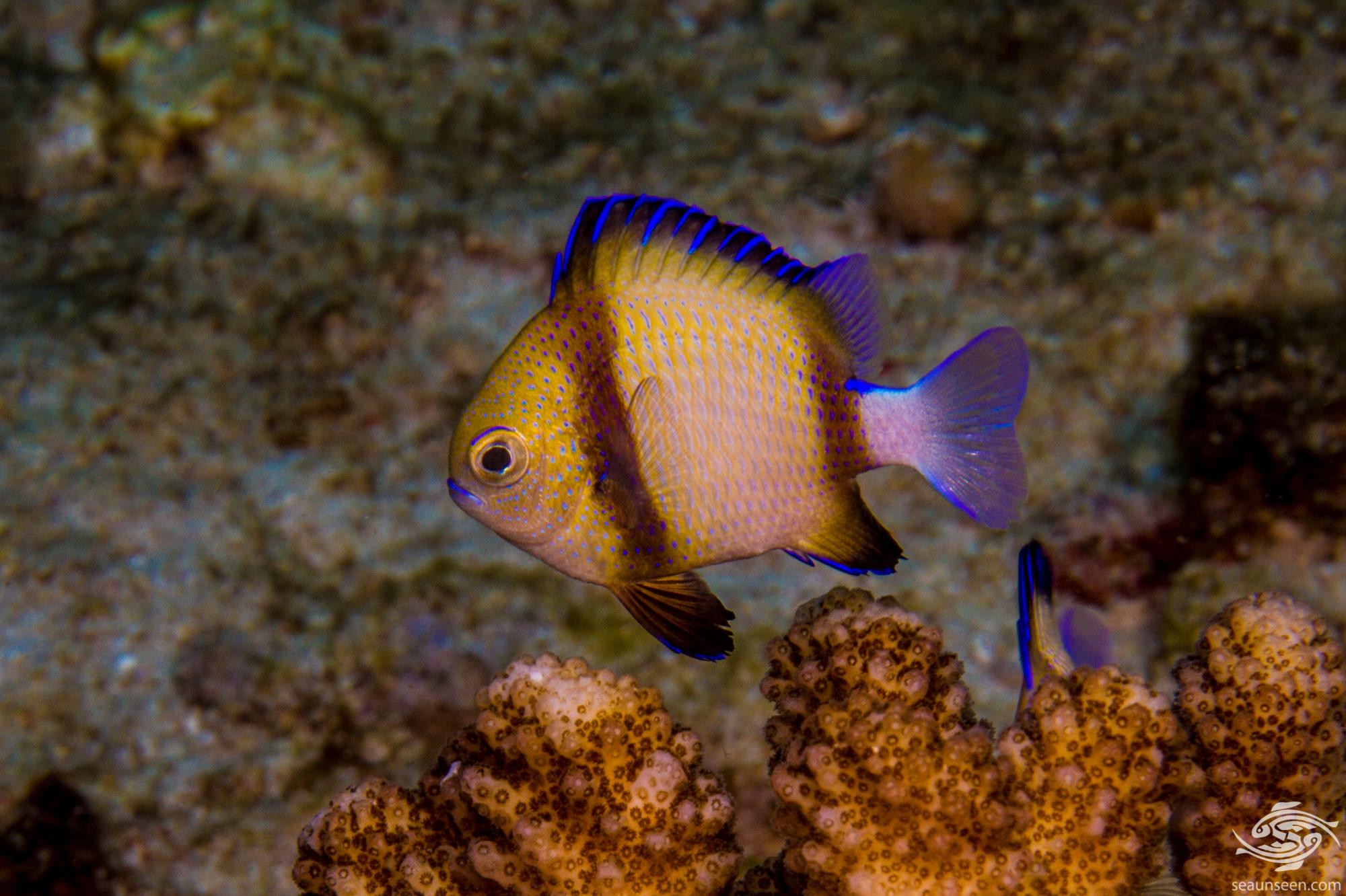 The Domino Damselfish is found across the Indian Ocean, south to central Kwa-Zulu Natal. In Tanzanian waters they are usually found between 3 and 18 meters but can on occasion be seen deeper. They are found both on protected and unprotected reefs in Tanzania. 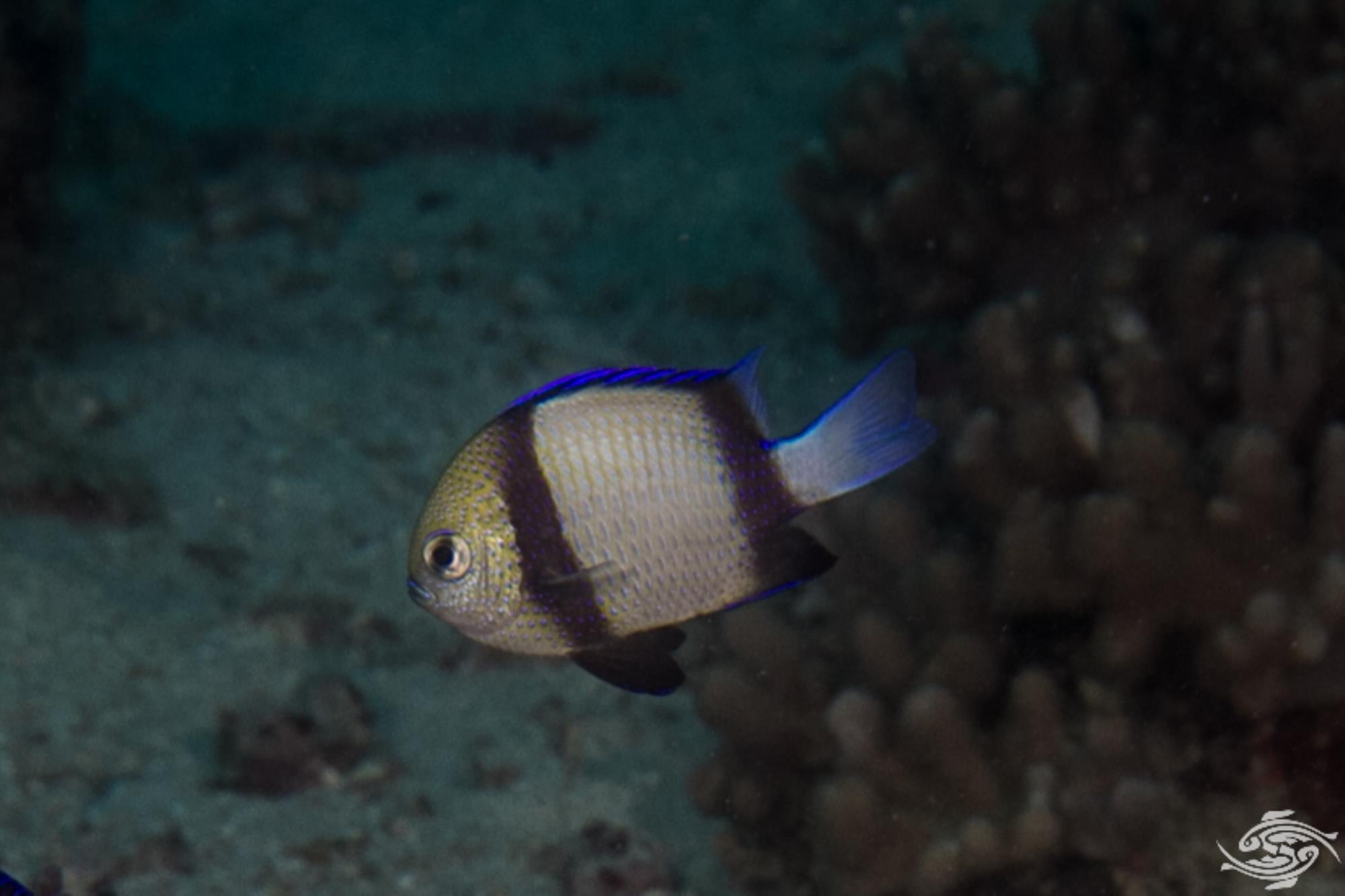 The Domino Damselfish feed on zooplankton. 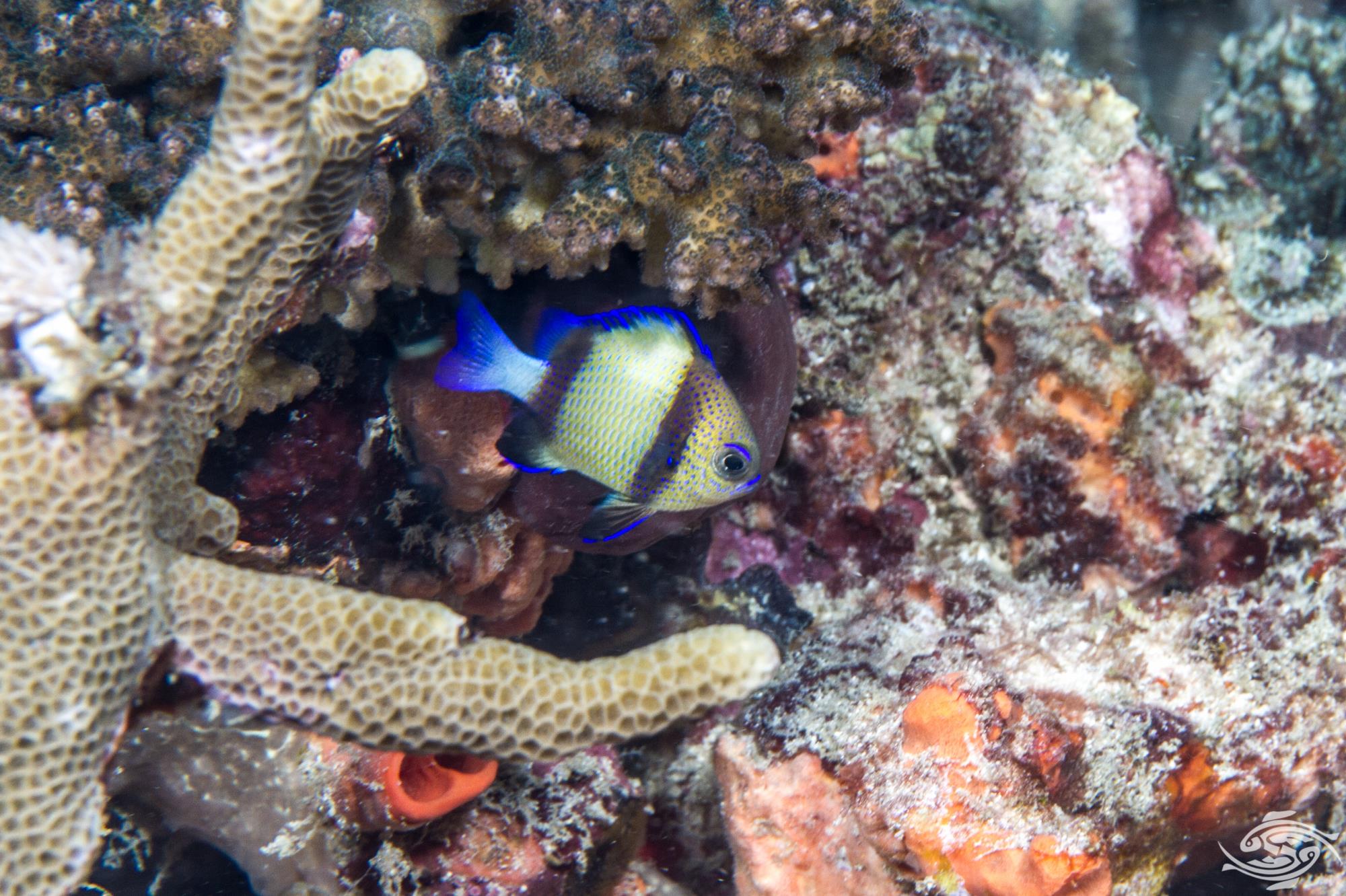 Pairing before mating has been noted and the eggs are demersal and adhere to the substrate. The males guard and aerate the eggs until they hatch. In a shoal there is always a definite pecking order. There will usually be one dominant male which is larger and possibly a smaller male. There will be a dominant female and the balance of the shoal will be made up of females and juveniles.

If the dominant male dies and there is no other male then the dominant female will change sex. If one sits and watches a shoal, one will sometimes see disputes between the members of the shoal, with the larger fish generally chasing the smaller a short distance. They are known to use sounds and the larger the fish the lower the frequency of the sound they put out. They are probably a lot more aggressive when egg laying has taken place. 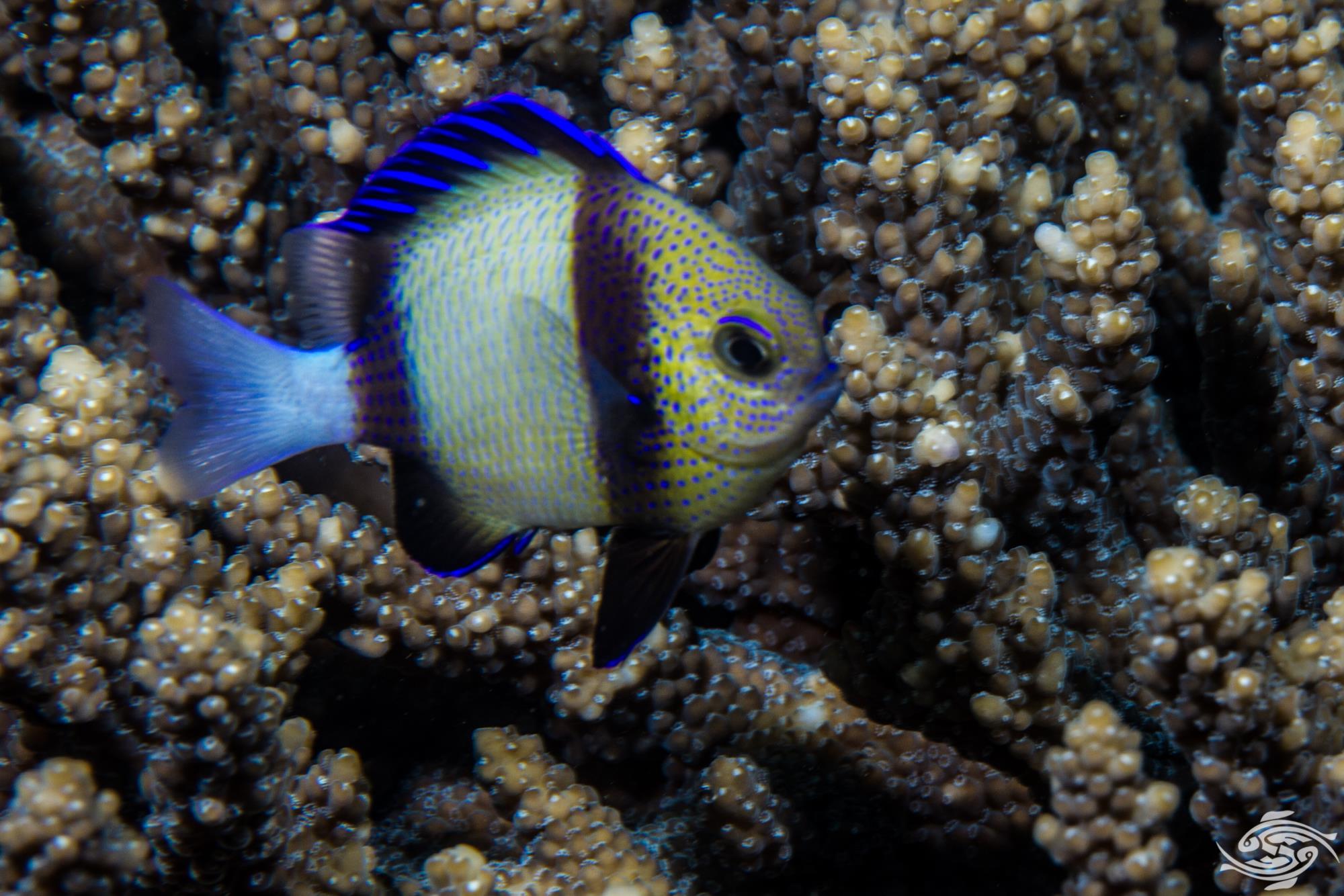 Cloudy dascyllus are popular for beginners and are extremely hardy and easy to feed. Several juveniles in a tank make an attractive addition to a tank as they will usually shoal together. On the downside as they age so they are likely to become more territorial and great care has to be taken in choosing their tank mates unless one has a very large aquarium. They have been known to live in an aquarium for up to 15 years.