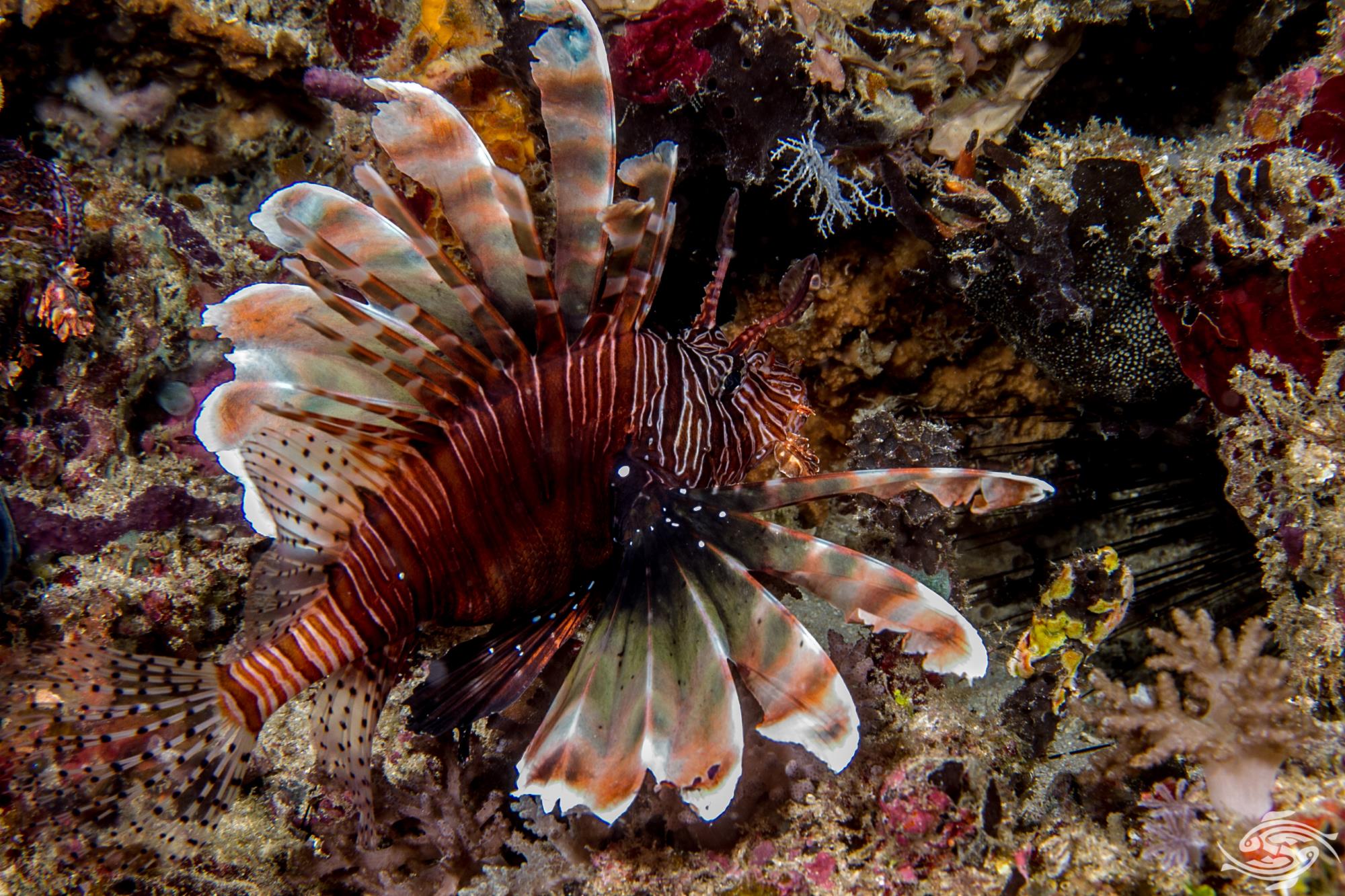 The Common Lionfish, Indian Lionfish or Devil Firefish (Pterois miles) is only found in the Western Indian ocean. They are often understandably confused with Pterois Volitans which is also called the Common Lionfish in some areas.

The two species are distinguishable only by the number of spines on their dorsal fins and by their location. Pterois Volitans is found in the Eastern Indian Ocean and the Pacific.  The Cleartail Lionfish ( Pterois russeli) or Russell’s lionfish is also similar but as its name implies has no markings on the caudal fin. 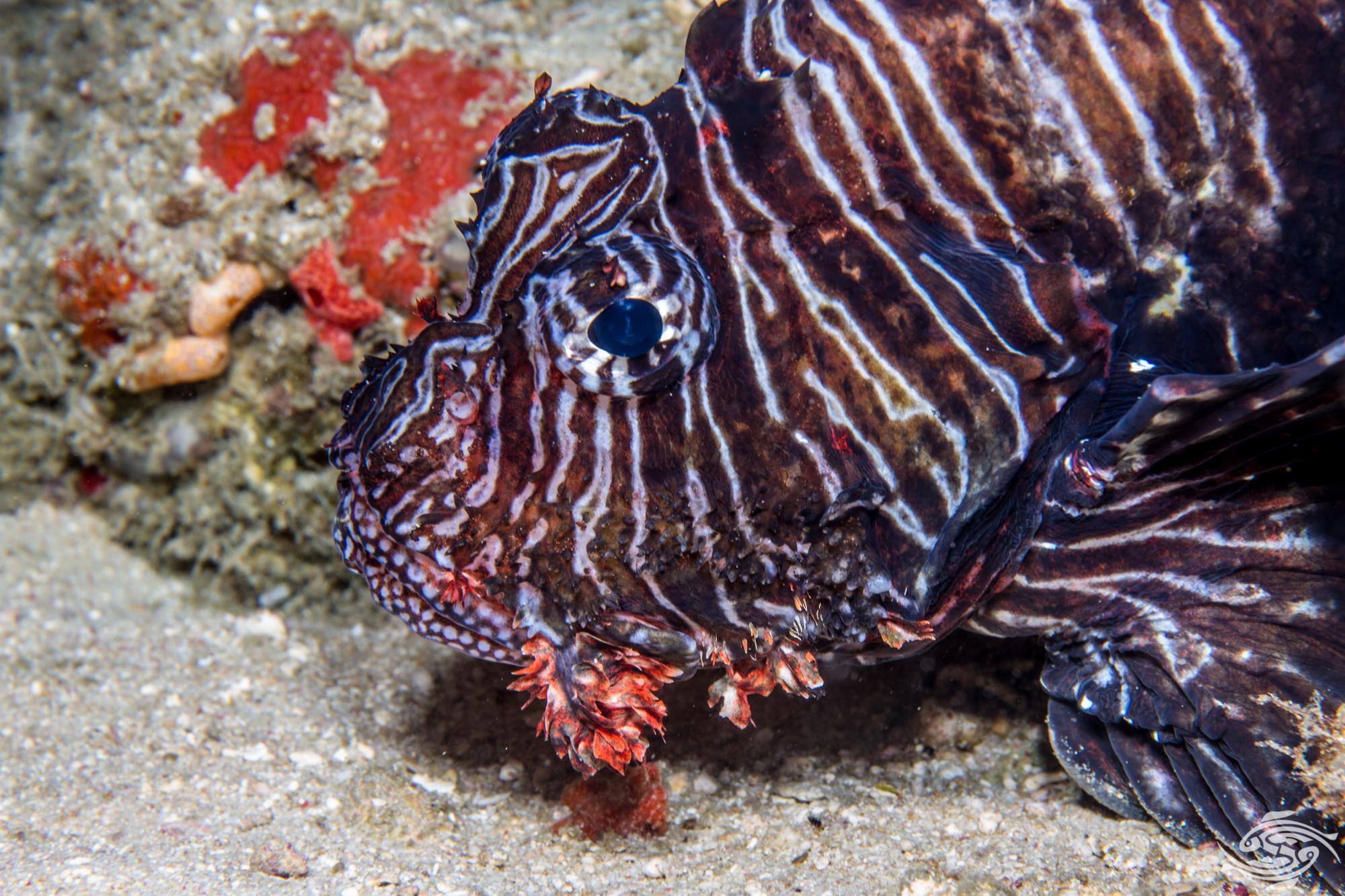 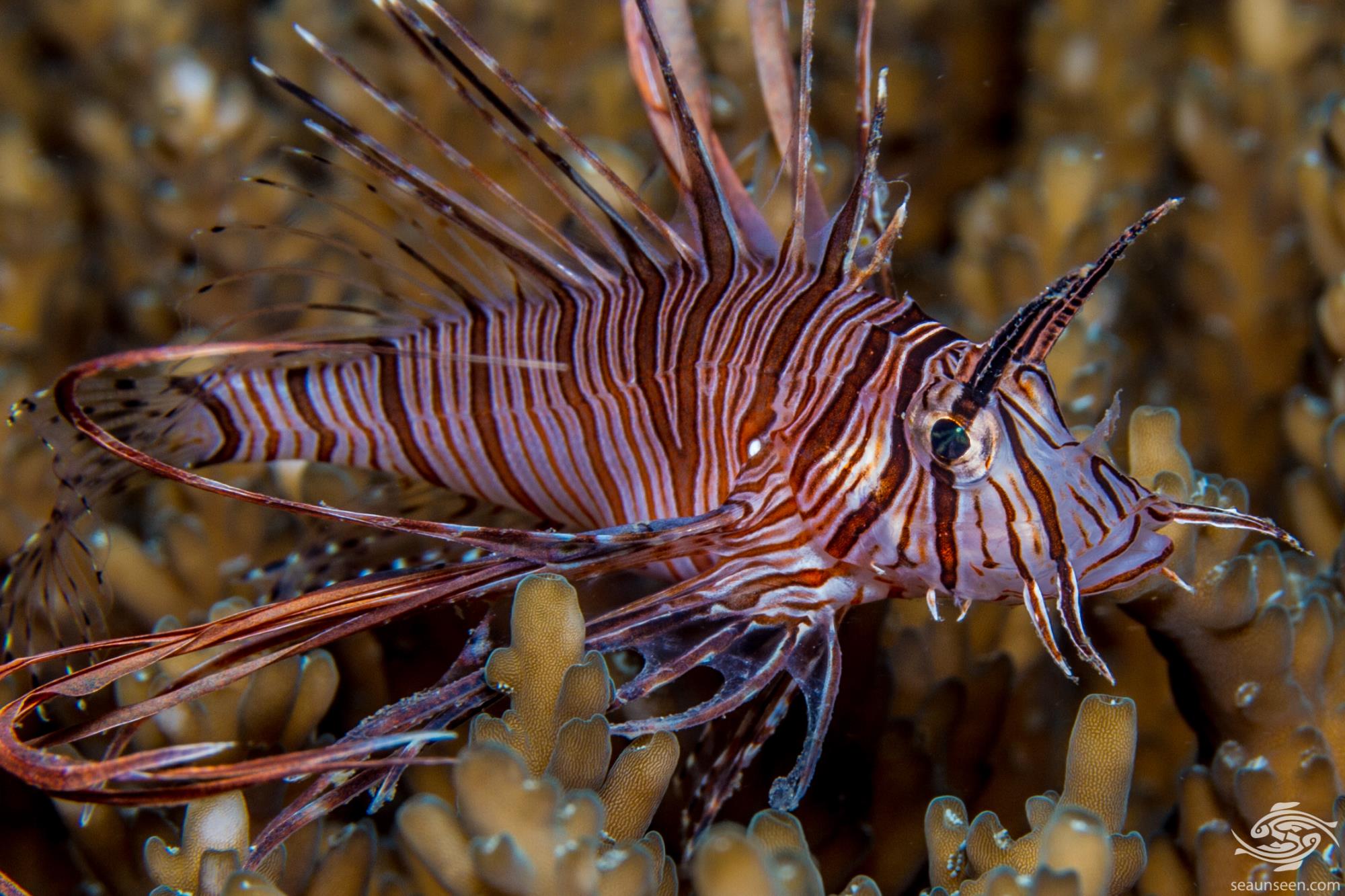 As they age so the colours darken and there are several colour variations that develop.  The background colour varies from a orange brown to dark brown to black.  Pairs of vertical white lines traverse the body , in some specimens as seen below the white lines become indistinct towards the stomach area.  The dorsal and pelvic fins thicken and become shorter on a proportional basis on the adults. 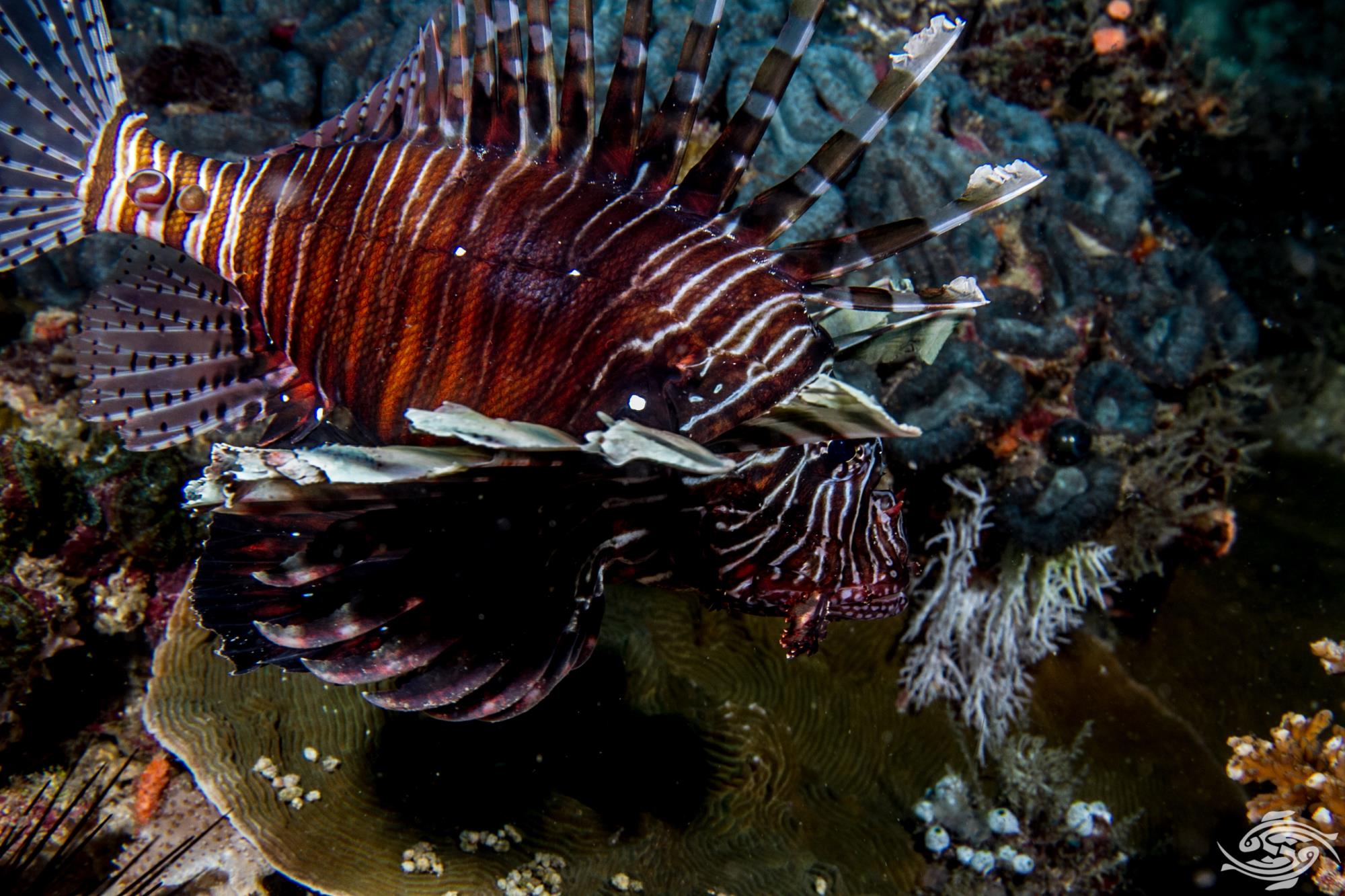 The Common Lionfish are generally easy to approach and are often seen sitting in the open alongside some type of feature or in-between two stones or pieces of coral. They are generally fearless of divers and are easy to approach. The dorsal and pelvic spines of the Lionfish contain poison, which gives them their confidence and although it will not normally be fatal, will be extremely painful to most people.

During the day they are often seen in large groups of up to ten or more fish in caves and under overhangs. Sometimes while sitting observing other fishes they will float up to a diver and one has to be careful not to brush their fins. They are good at manoeuvring in any direction in the water and their movements are slow and deliberate.

The stories of Lionfish being highly territorial are not borne out by observation underwater. During the day they are often found around or in a feature which has caves and large numbers of shoaling fish such as Cardinalfish or Sweepers on it. They have been observed eating these fish during the day but have never been observed to be aggressive towards each other.  We have seen up to twenty in a cave together.

At night they are usually seen singularly out in the open , but usually fairly close to a hiding spot and have been observed feeding. Equally incorrect are the stories of Lionfish using their venomous fins to attack divers or anything else for that matter. When a Lionfish is in the open and they sight a diver they will spread their fins out, probably with the intention of making themselves look as large as possible.  If they feel threatened they will slowly back away from the diver.

If one is spiked by a Lionfish then one should seek Medical attention as fast as possible. Any spines stuck in the body should be removed as quickly as possible. The good news is that although it will be painful it will not be fatal or have any long term effects unless one has a severe allergic reaction which is unlikely.

The best treatment is to apply heat onto the area where one has been spiked.  Often but not always hot water is the best way of applying heat to an affected area.  Heat breaks up the protein chains in the poison.  Soaking the area in water between 42 C and 45 C is the recommended treatment. In other words just about as hot as you can take it for 20 minutes. Most geysers are set between 55 C and 65 C to give you an idea of what really hot is. Be careful not to burn yourself.

Many years ago while diving in a cave on the Kwa-Zulu Natal north coast, the swell pushed me up violently onto the top of the cave and I felt an immediate  burning pain on my back. After going ashore three spines had pierced my 5mm wetsuit and there were large red lumps on my back in a straight line . The pain was a burning hot type of pain. I immediately went to a Doctor who gave me an antihistamine injection and some painkillers and told me I had been spiked by a Sea Creature!  It took about three days for the pain to drop off and ten days for the lumps to go down. While I can never be sure exactly what it was, I did see a Lionfish when I went into the cave. 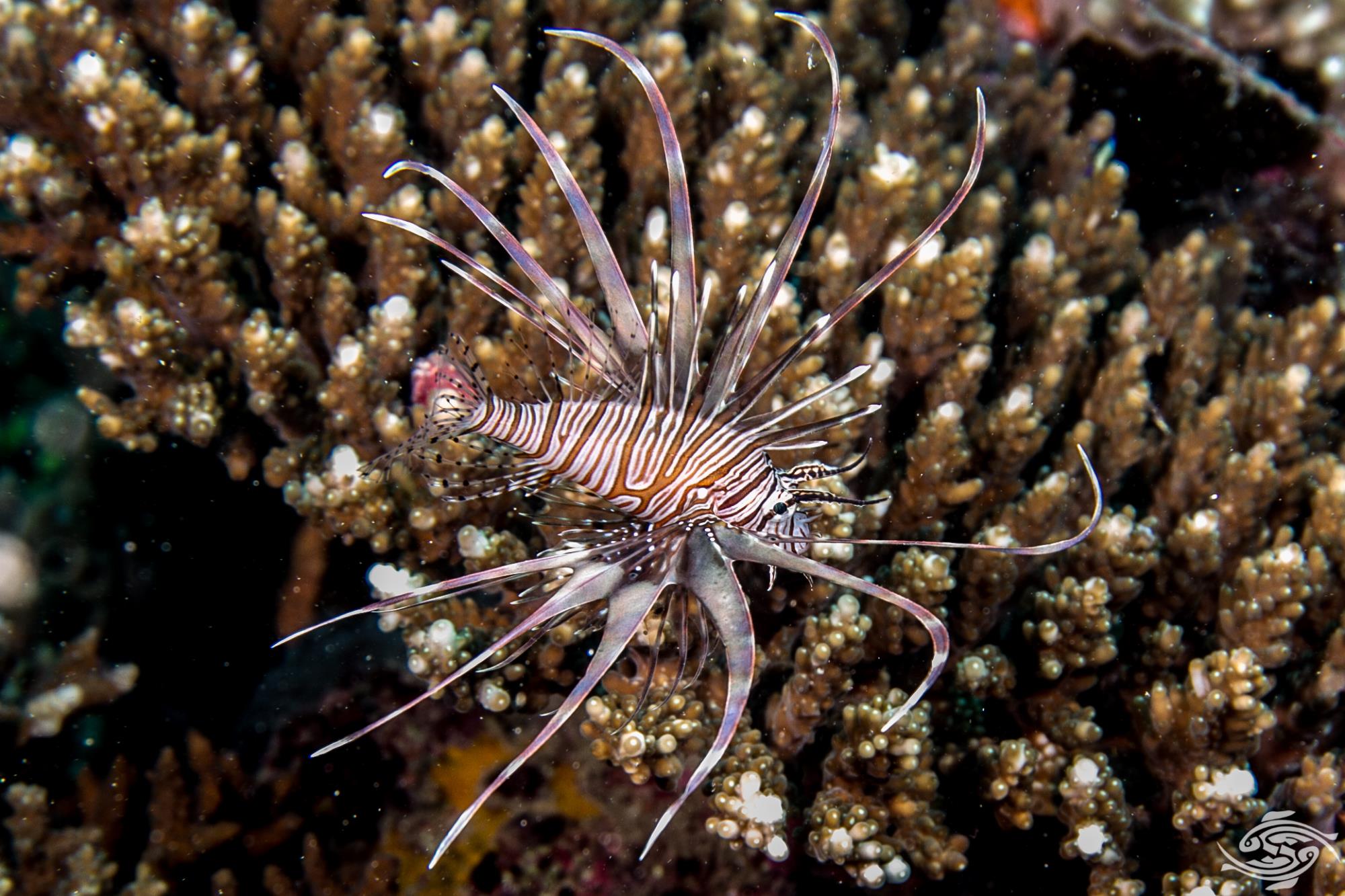 Common Lionfish are found across the West Indian ocean, all the way up the East coast of Africa to the Red Sea and are found from between 1 meter to 50 meters. They are however more common in Tanzania from 5 meters downwards. 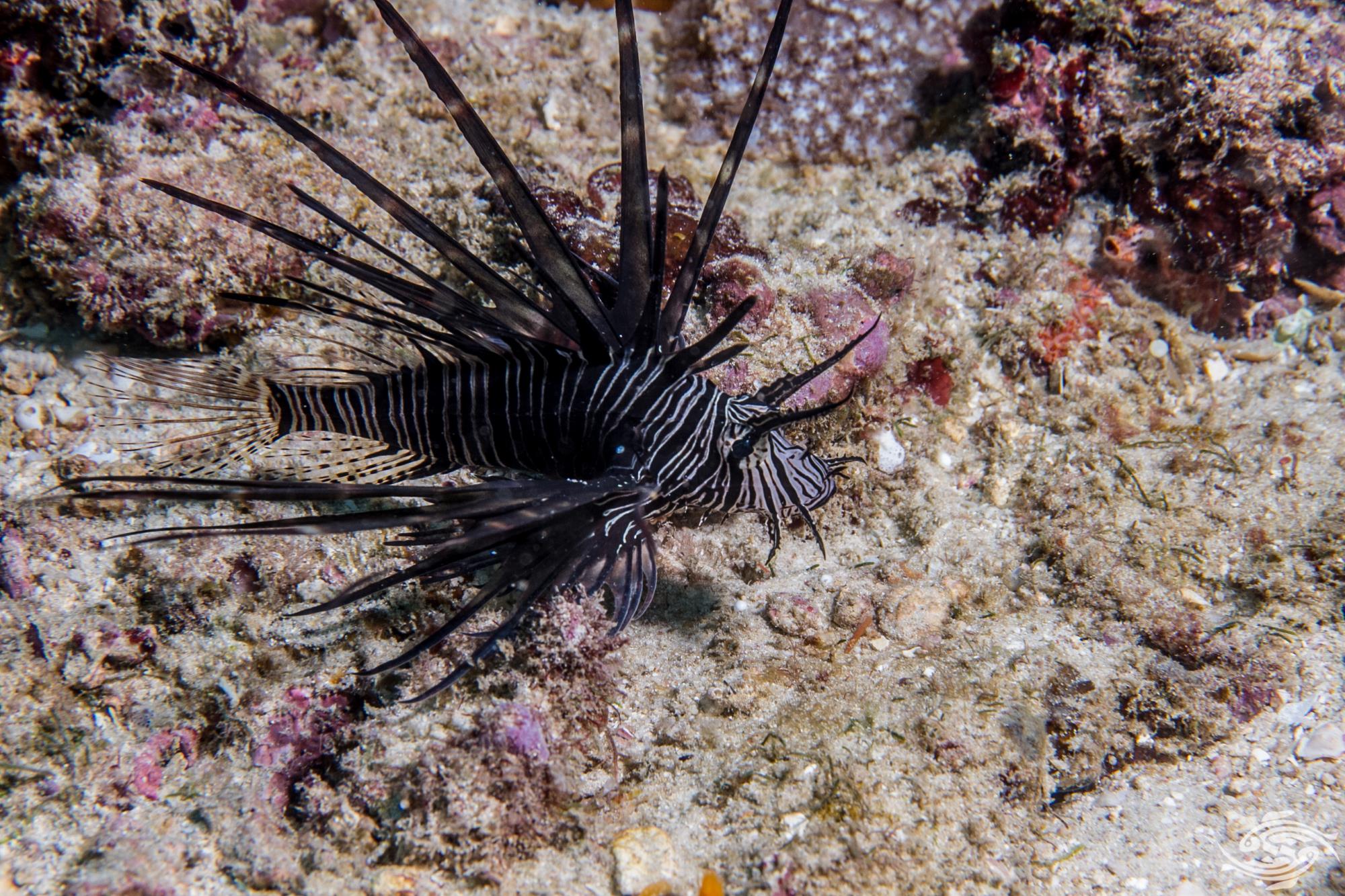 Common Lionfish prey on small fishes and crustaceans and pretty much anything that fits in their mouth. They use their proportionally large mouths to create a vacuum and suck in and swallow the prey.The juveniles are commonly seen out just above the reef and are adept at herding small fish and crustaceans with their large fins.

I once watched a juvenile in a rock pool for some 15 minutes, slowly herding a shrimp towards a dead end crevice. It was much like a bullfighter , using its fins to slowly manoeuvre the shrimp into a dead end crevice. As the fish made its final lunge so the shrimp flicked its self backwards hitting the side of the crevice at high speed and bouncing over the lionfish.

The adults are often found around features with large numbers of cardinalfish and sweepers. If one watches for long enough one can see the lionfish slowly and almost imperceptibly manoeuvre towards a fish it has picked out. The strike is fast and they will usually lunge forward at the prey. As they open their large mouths so a suction is created and the prey is swallowed whole.
They are often seen out hunting at night and there is some video below of a Lionfish feeding on a shoal of passing fish. 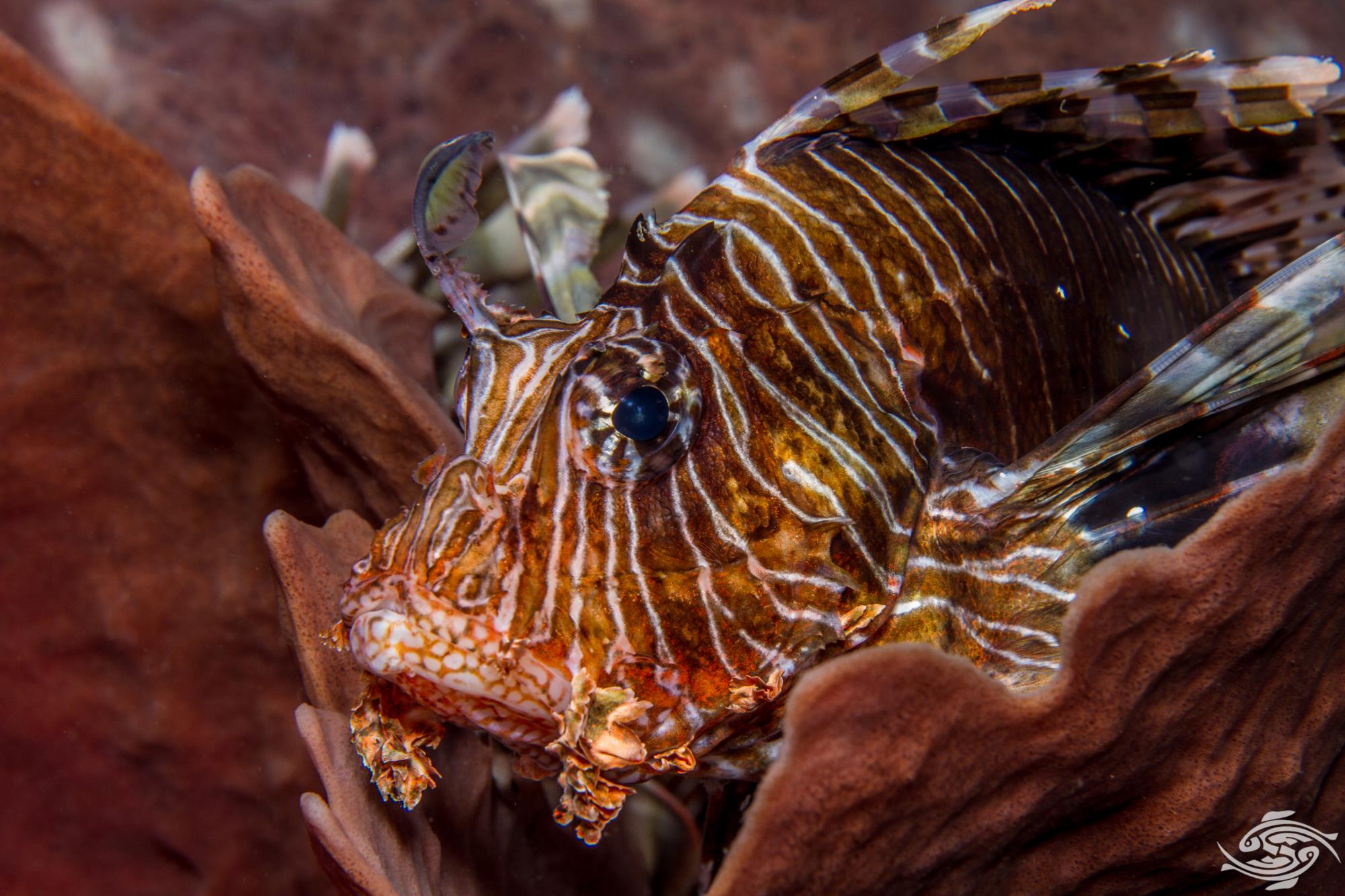 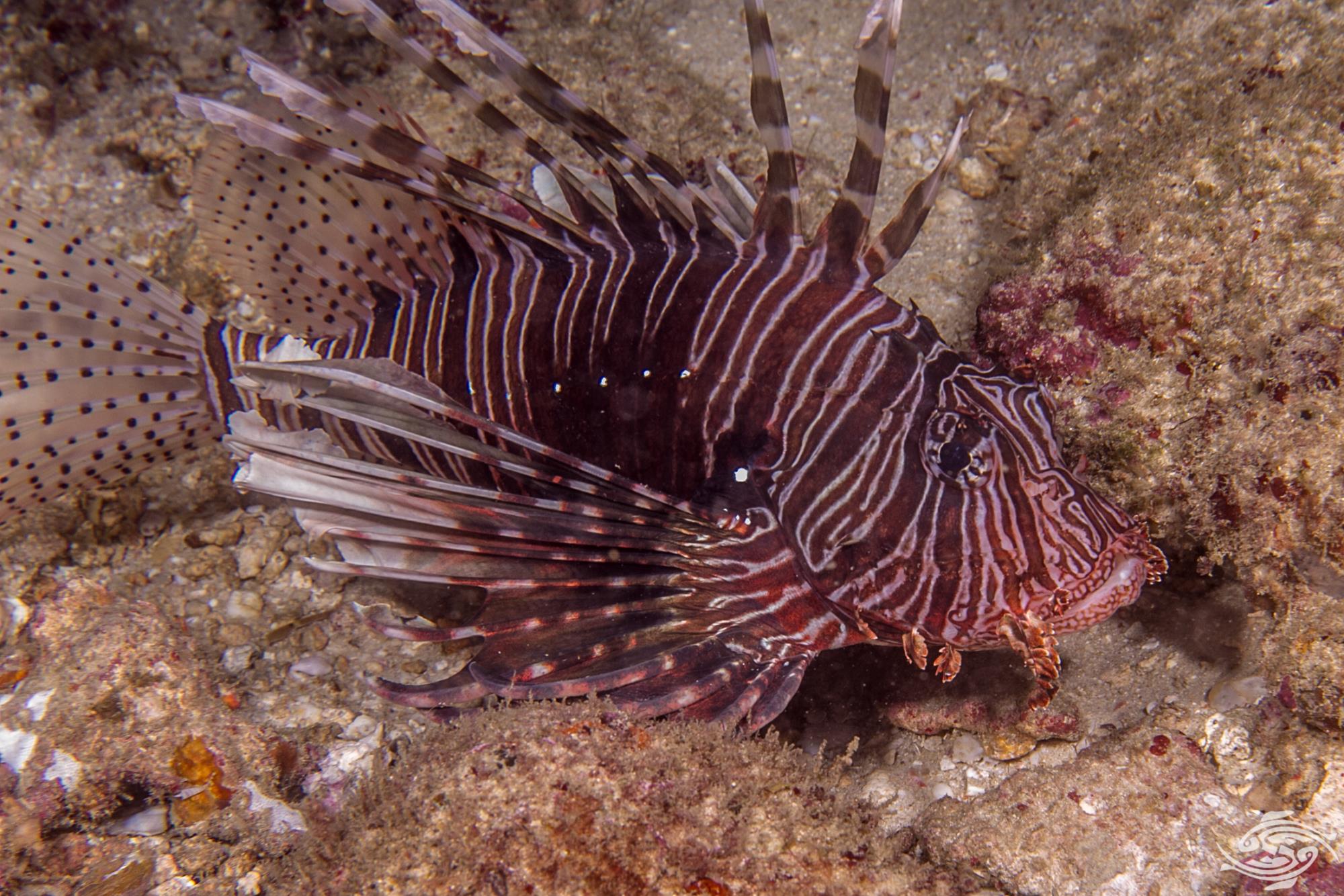 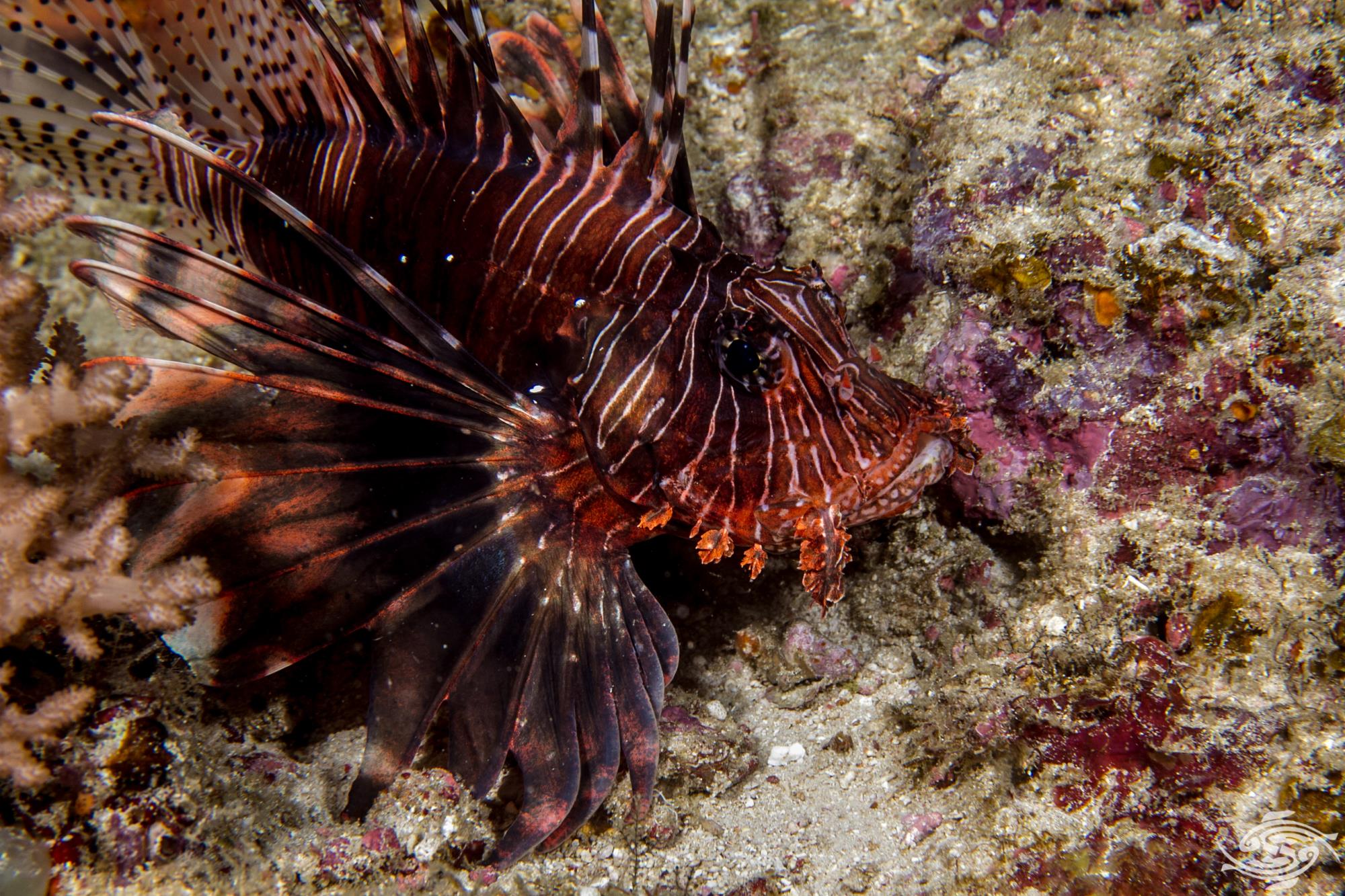 Common Lionfish are kept by some collectors and make an attractive feature in the right type of aquarium. They will eat anything that fits in their mouths and will occasionally try their luck with things that will not fit in if they are hungry enough. As a consequence care has to be taken in choosing their tank mates. They are relatively easy to get across onto prepared foods. They also grow up to 30 cm in length and about the same width. Being voracious eaters they grow very rapidly and one needs to plan for this if one intends to keep one in a tank. 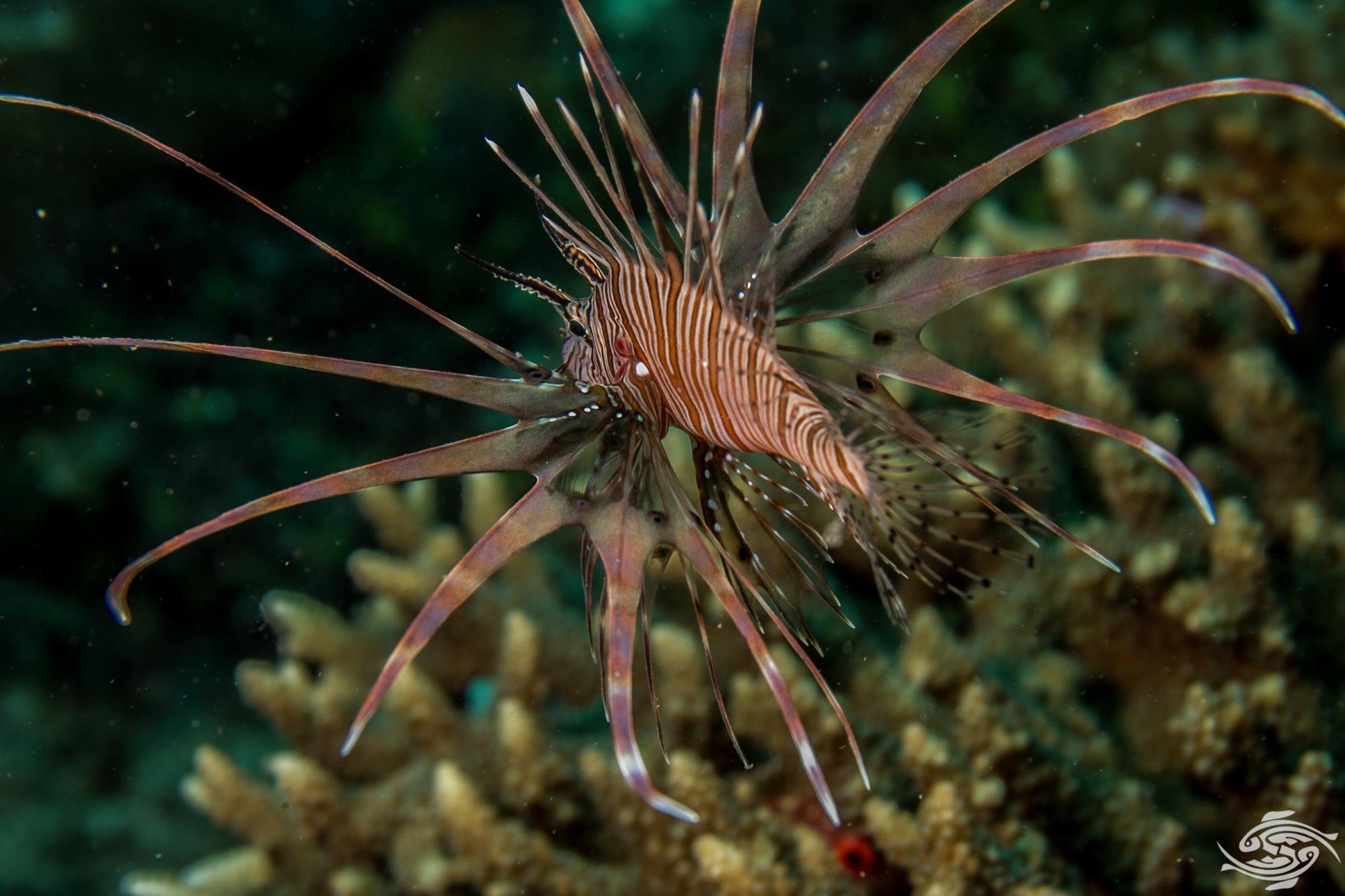 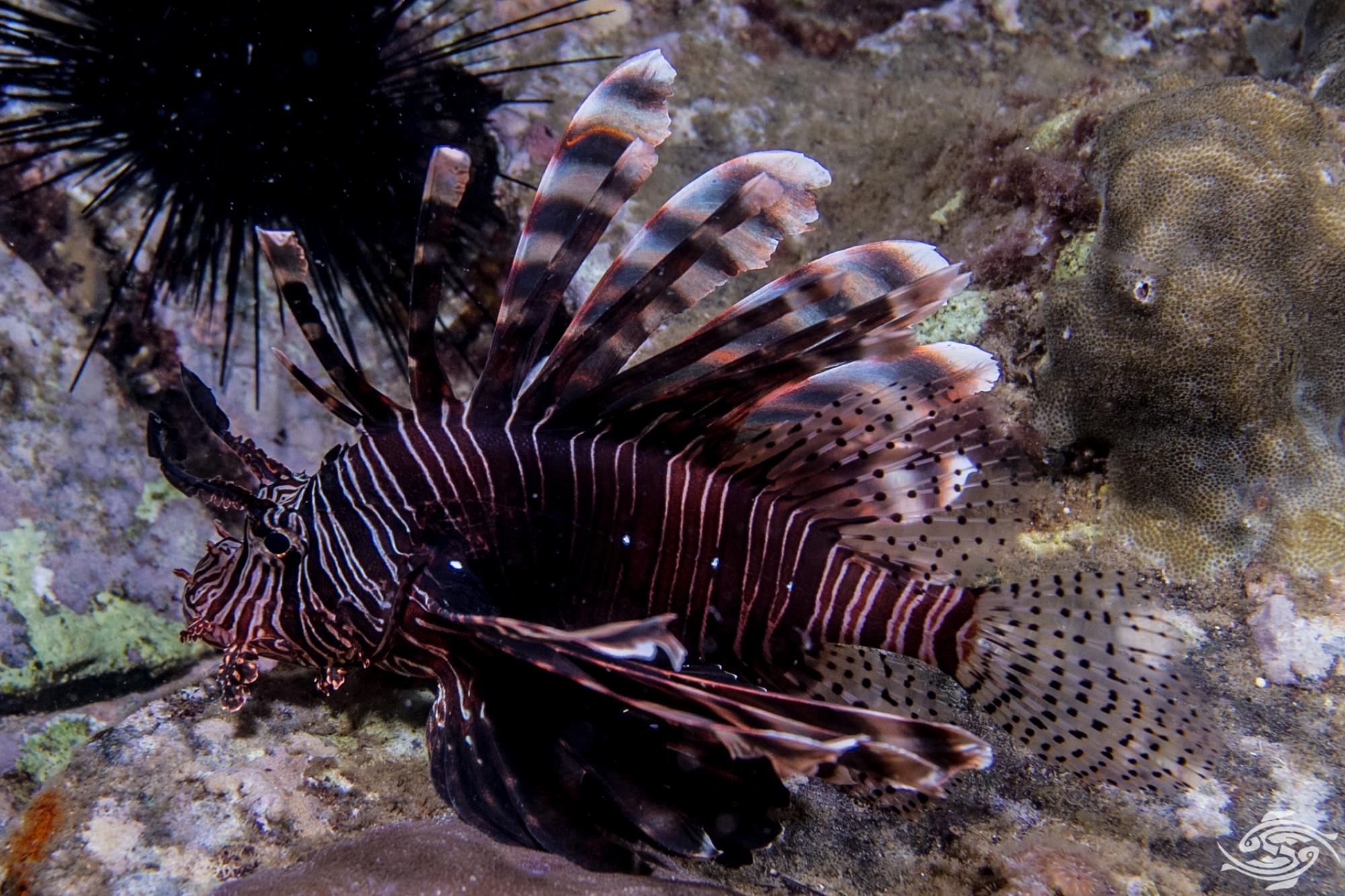