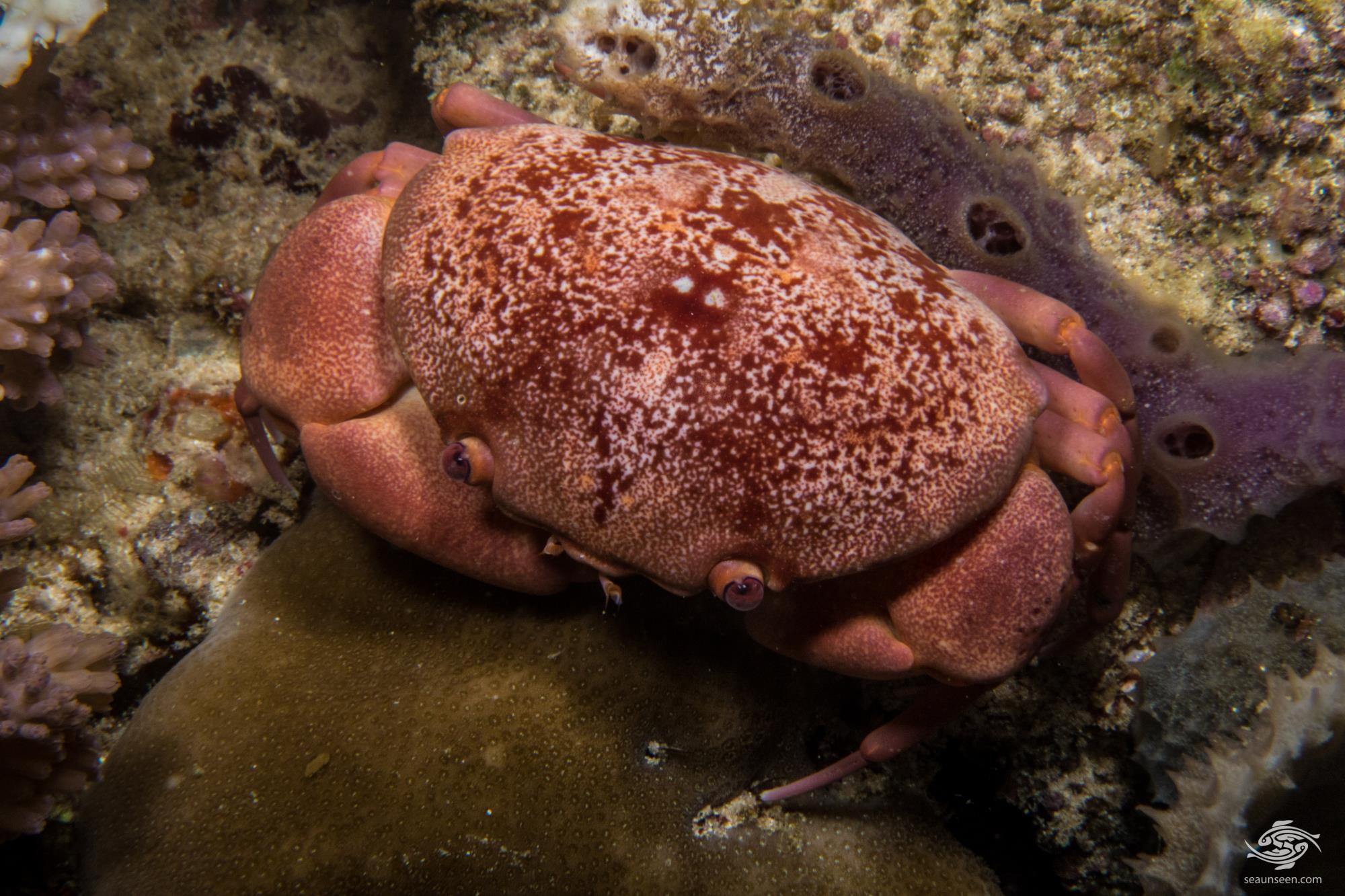 The Convex reef crab (Carpilius convexus) is also known as the Round-back Coral Crab. They are fairly common at night in the waters off Dar es Salaam but are seldom seen out during the day. Large specimens are rare and this is probably as a result of trapping.

They are decapod crustaceans in the Infraorder  Brachyura, in the Carpiliidae family and are true crabs,  they were first described by Forsskål in 1775 with the type locality being in the Red Sea. The biology of the Carpiliidae  family is not well researched. 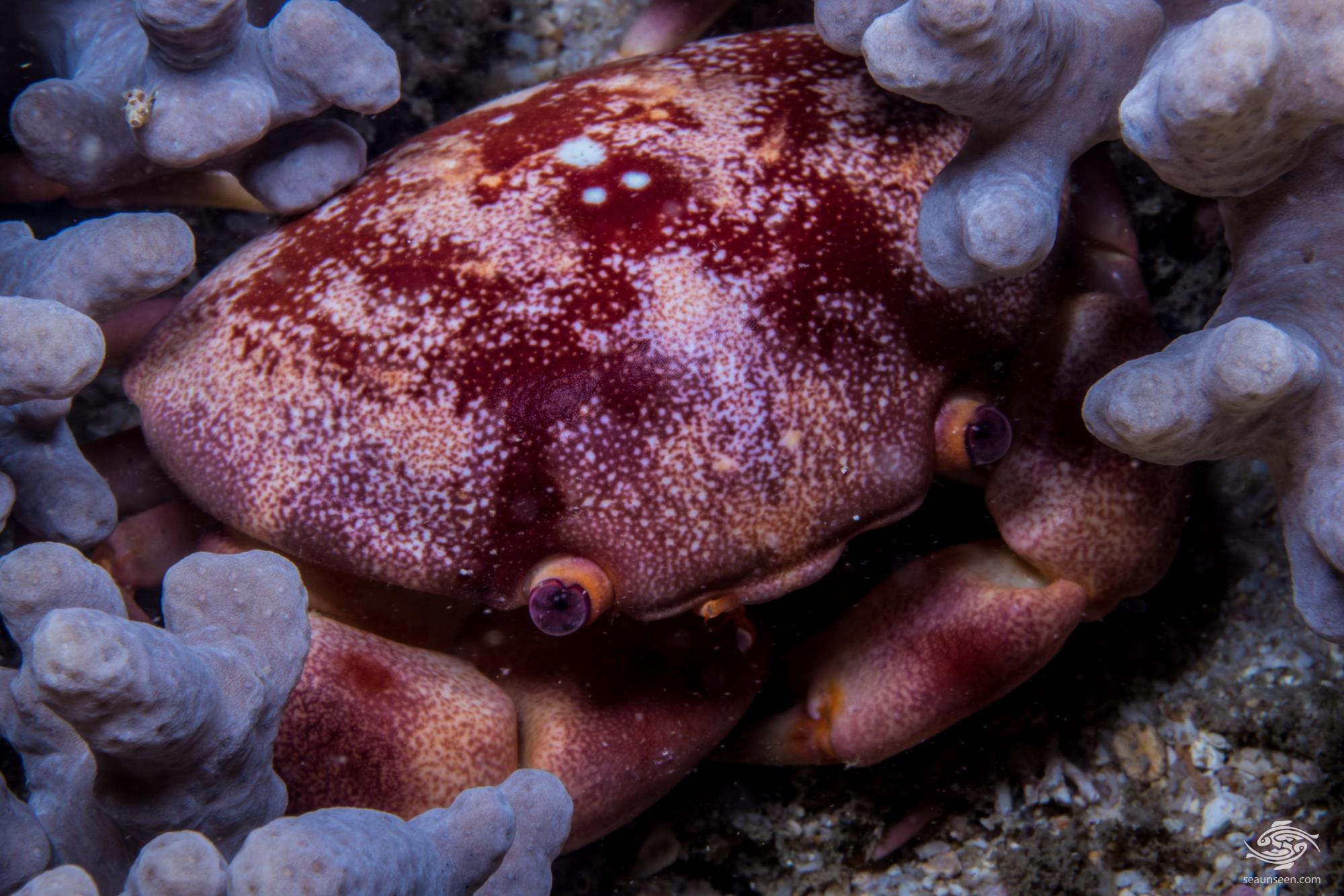 The carapace colors seem to range between a red and a mottled red and white combination as can be seen in the images. Interestingly they seem to not have a lot of algal or other growth on them and there might be some cleaning or antifouling mechanism at work. Possibly also they are not exposed to sufficient light seemingly being nocturnal.

As might be expected from their name, the carapace is convex and slightly dome shaped. In the center of the carapace is a distinctive irregular red blotch, sometimes with a larger white dot in it and two smaller dots that are always there. The right claw is larger than the left and they have proportionally large claws. Males are larger than females and have a carapace width of up to 68 mm whereas males grow up to 78 mm. Some reports in Australia have them growing up to 25 Cm in width but certainly we have never seen one larger than 7 cm.  Likely they are being confused with a similar species. 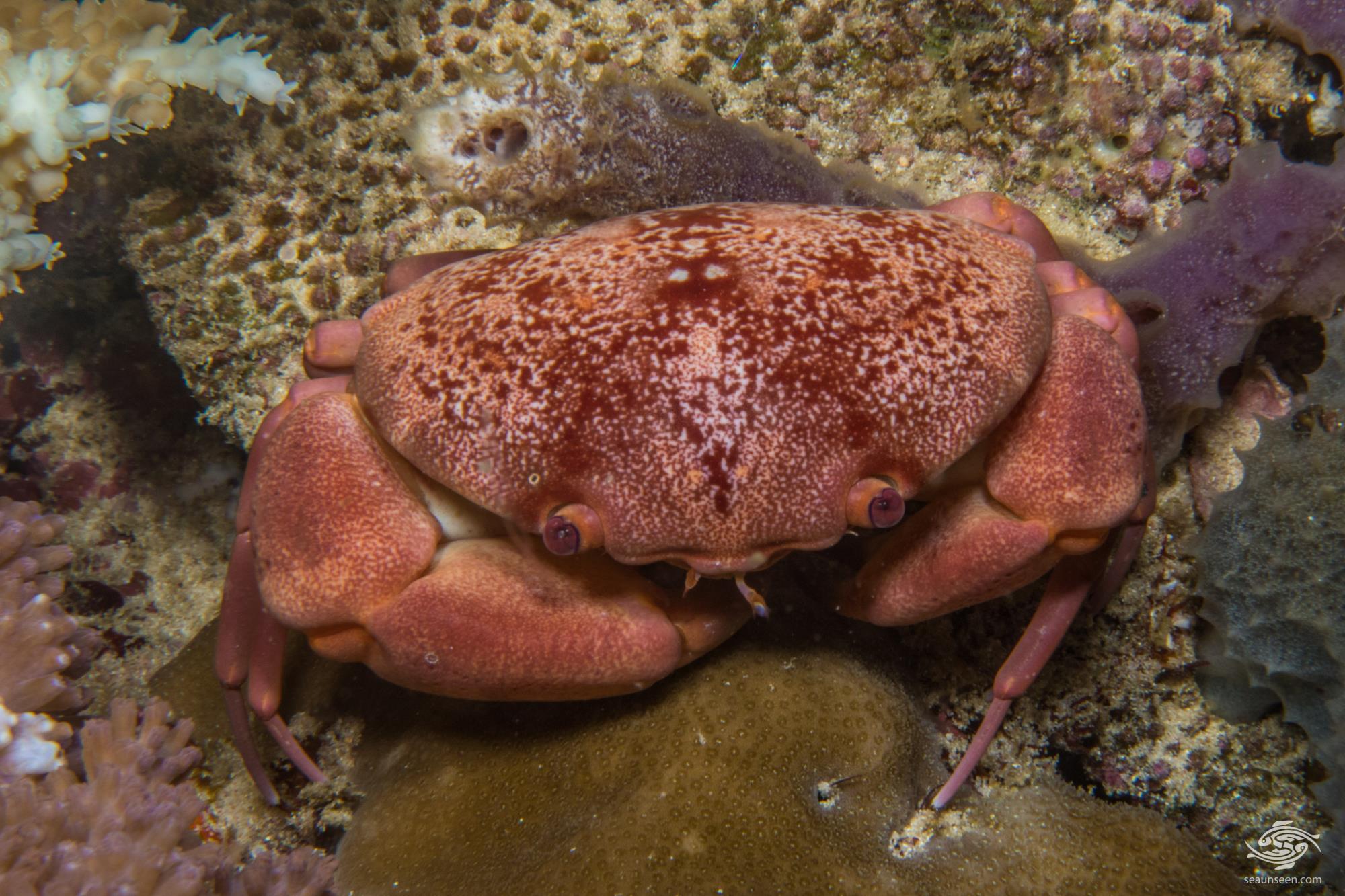 CONVEX REEF CRAB IN THE WILD

In Tanzanian waters we see the Convex Reef crab on shallow reefs at night and have not seen them on the deeper reefs. Interestingly they seem to not have a lot of algal or other growth on them and there might be some cleaning or antifouling mechanism at work.

Possibly also they are not exposed to sufficient light seemingly being nocturnal, but that in itself does not explain the lack of other marine growth. 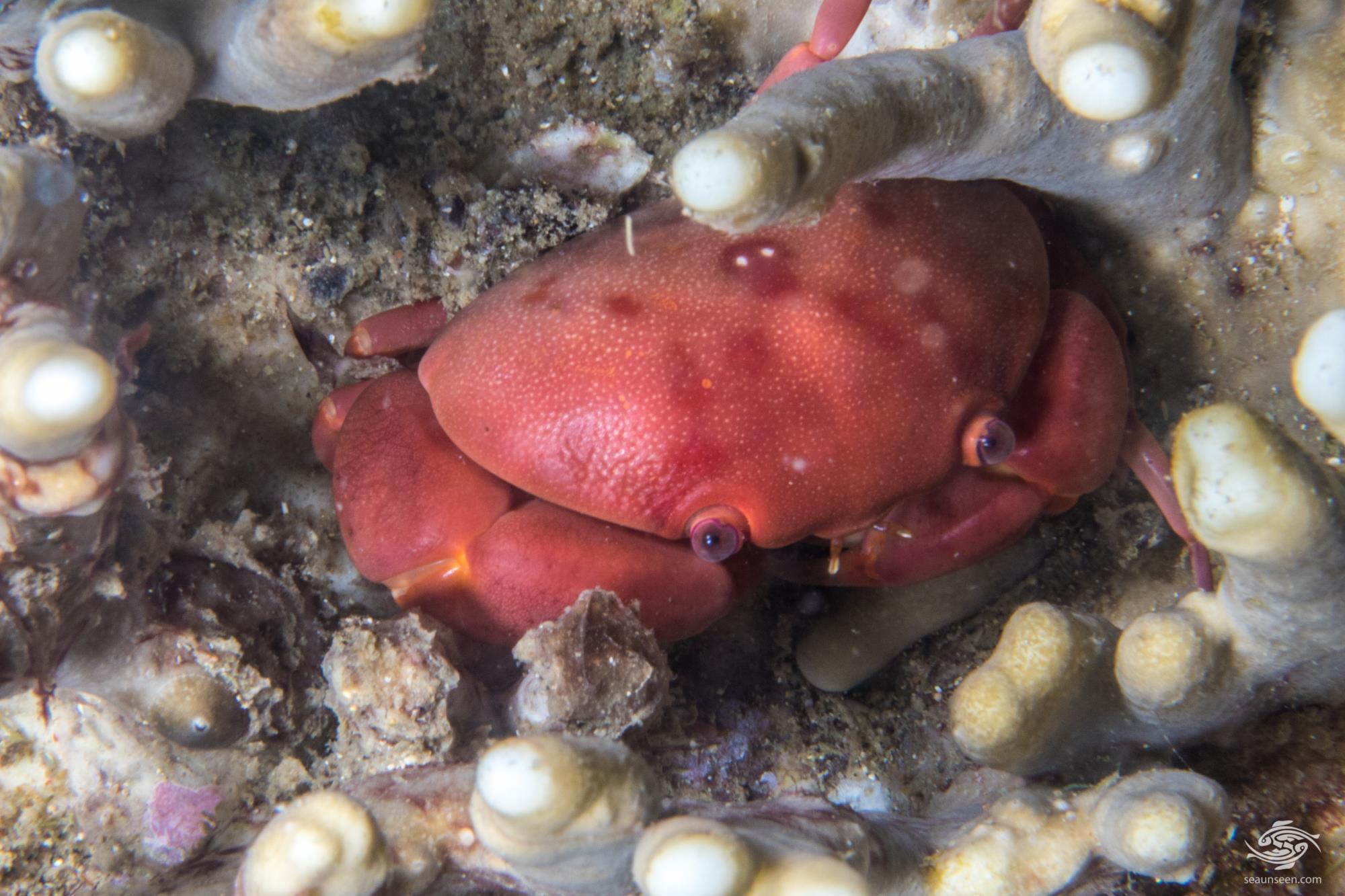 The Convex Reef crab are found from the east coast of Africa including the Red Sea across to Japan in the north and eastwards to Hawaii.

Convex Reef crab are assumed to feed on marine mollusks as other members of the family do.  However there seems to be no literature on their diet. Certainly their claws are similar in shape to those of their larger relatives and are likely to be specialized for this purpose. 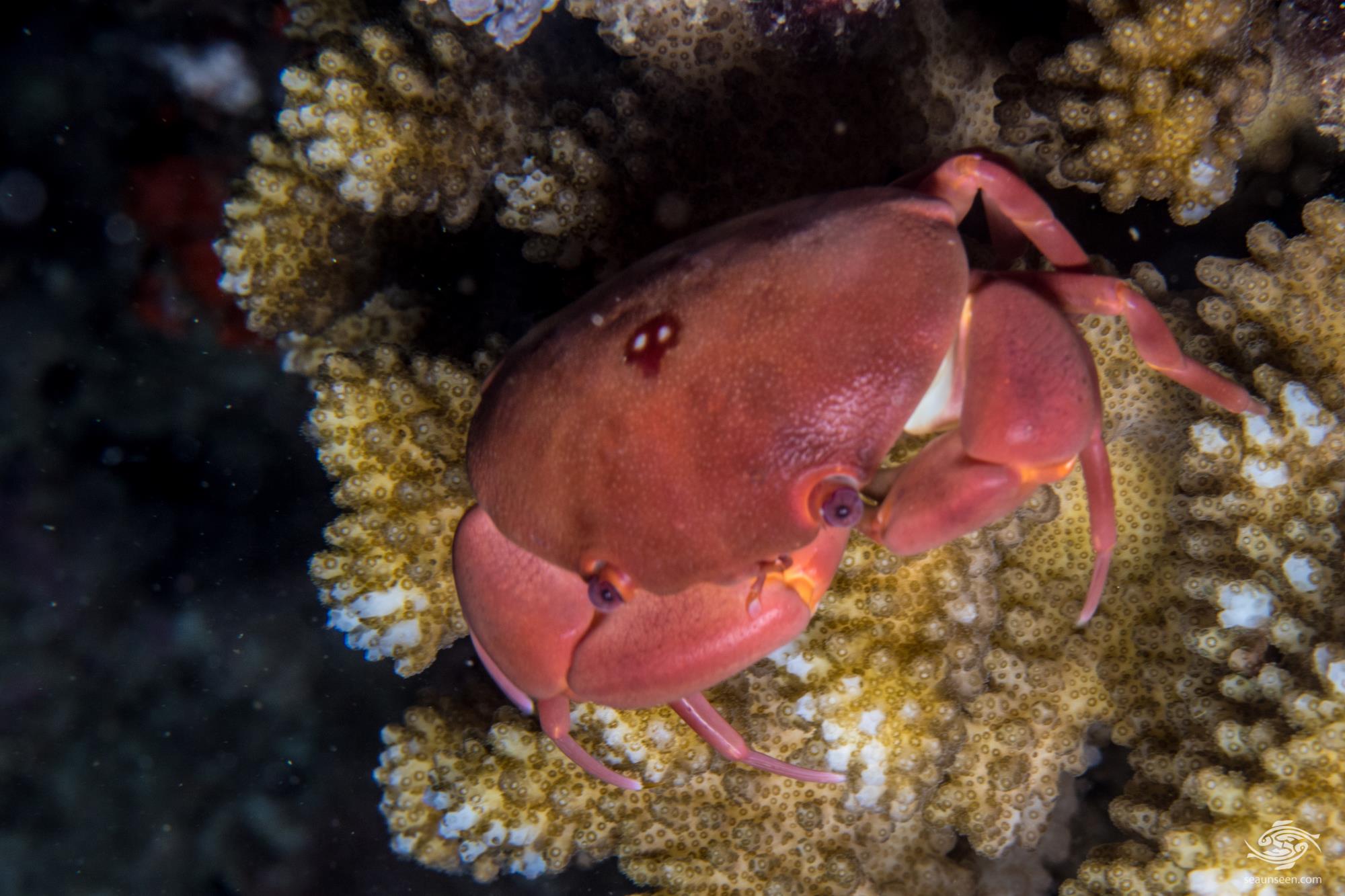 The eggs are fertilised by the male and are then carried under the body of the female. Once they hatch the larvae go through a planktonic stage before settling down and growing into their adult form. 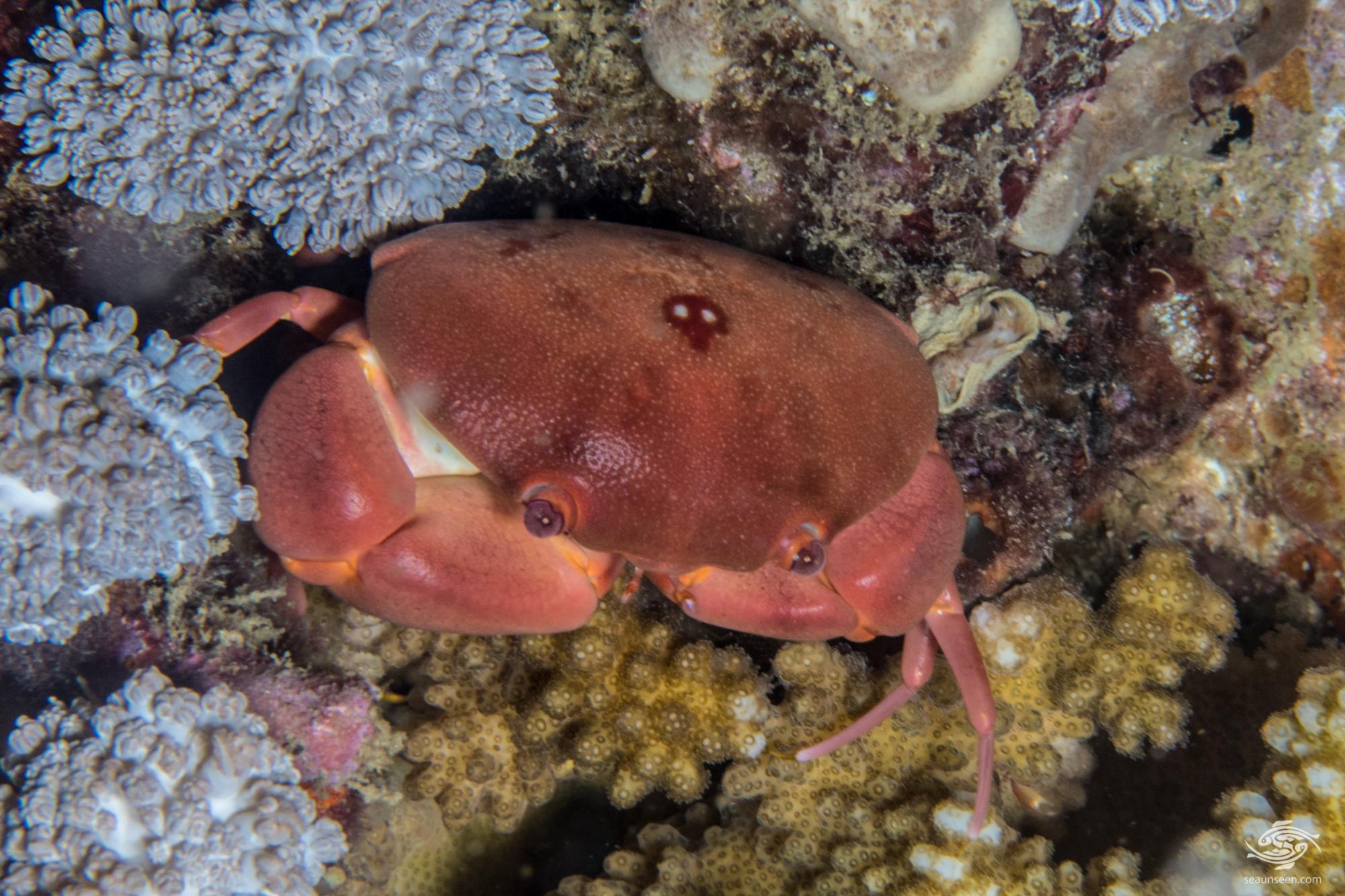 The Convex Reef Crab reportedly make very good eating and are trapped by indigenous fishermen in Tanzania in baited traps. 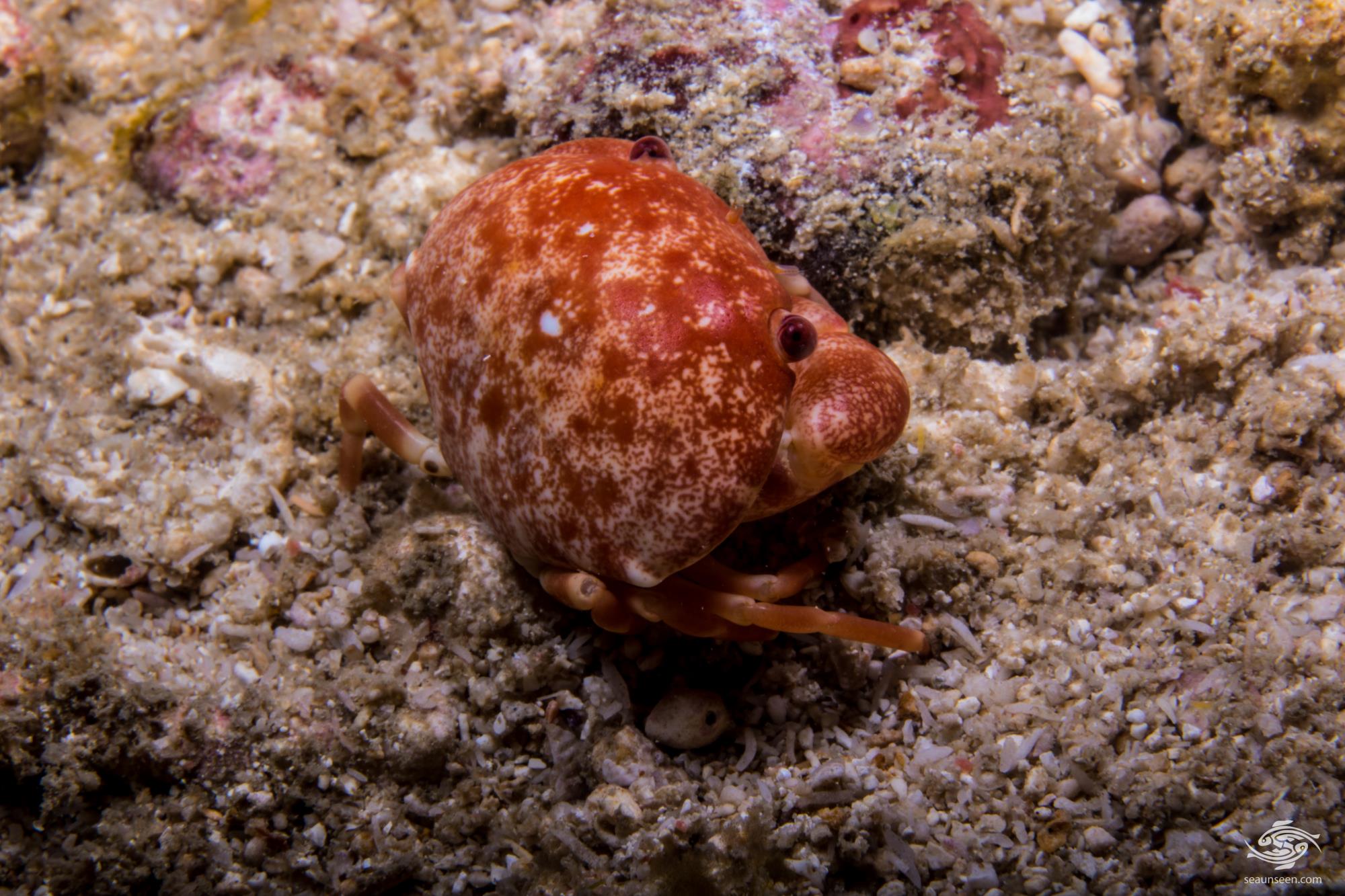