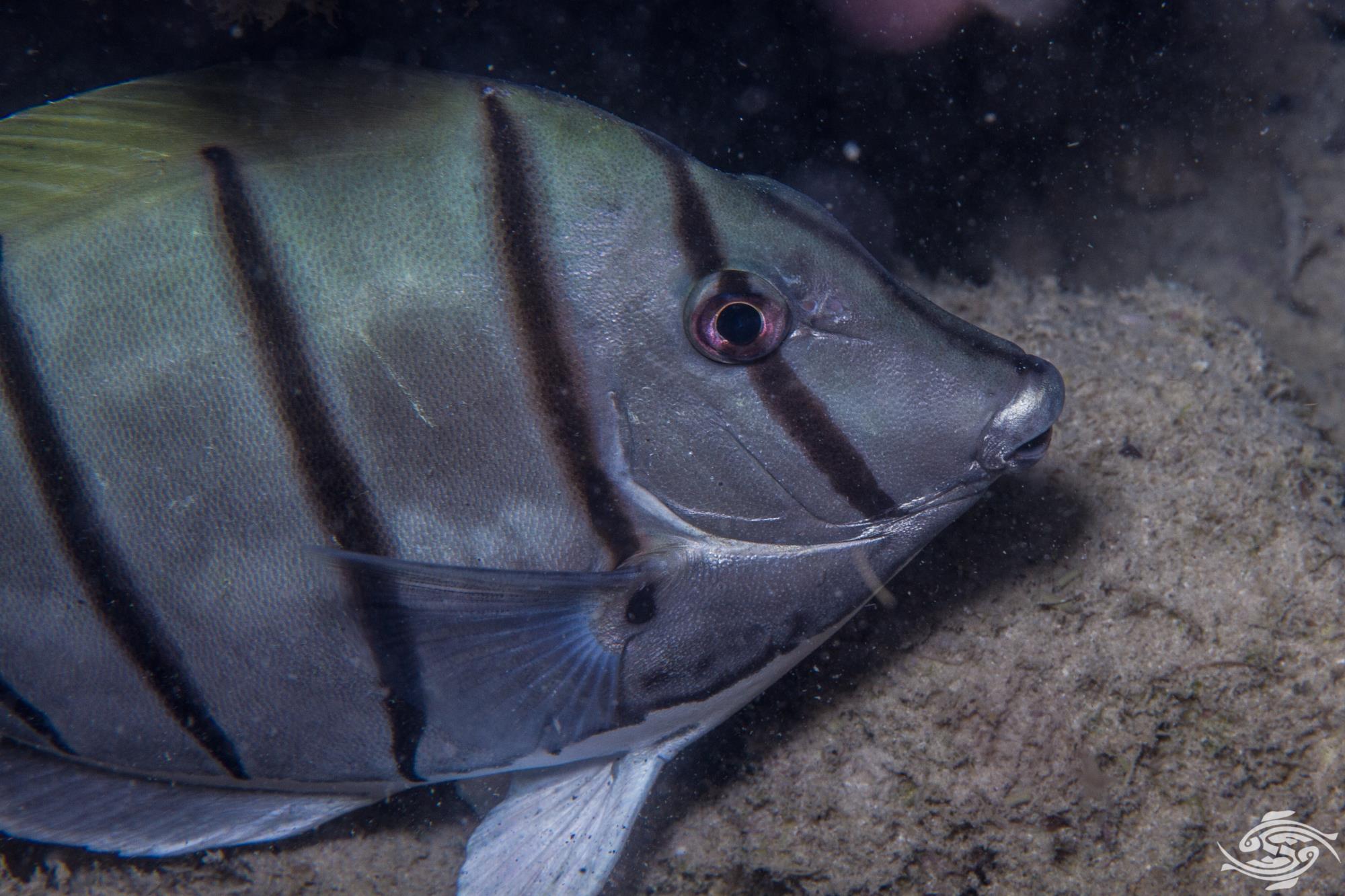 The Convict Tang (Acanthurus triostegusor) is also known as the Convict Surgeonfish, they are one of the smaller members of the surgeonfish family and are very common, mainly in shallower waters.

Members of the Acanthuridae family have a retractable razor sharp spine on either side of the caudal area. They obtain their name Surgeonfish from these blades.  The blades are used for defense and possibly in territorial disputes and can inflict significant damage. The blades are reported to contain toxins but there seems no scientific evidence for this. On the Convict Tang the blade is not as well developed as on other Surgeonfish.

The Convict Tang has an elongated oval body that is laterally compressed. The body is an off white color with horizontal black stripes giving their name from the resemblance to a convicts uniform. The dorsal area usually has a yellow tint to it .They grow up to 20 cm in length but around 12-15 cm is more common in the wild. 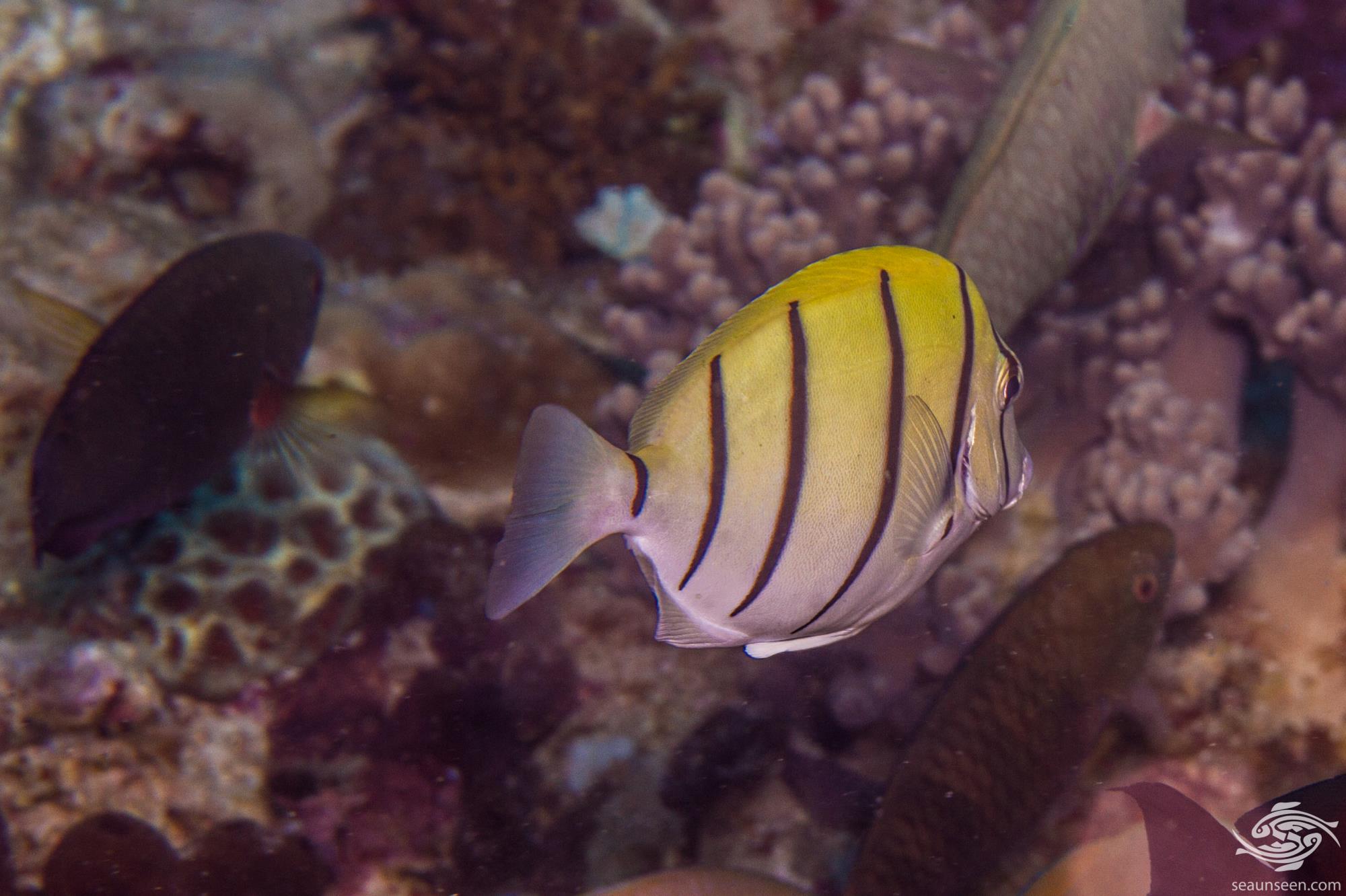 CONVICT TANG IN THE WILD

The Convict Tang is very common on the African coast and is mainly found in the shallower waters. However they are seen all the way down to around 15 meters in depth but are more common in the shallows. In the shallows it is not uncommon to see large shoals of them feeding close inshore. Further south in South Africa they are commonly found in tidal pools, particularly the juveniles. They are the most abundant surgeonfish on the East African Coast. 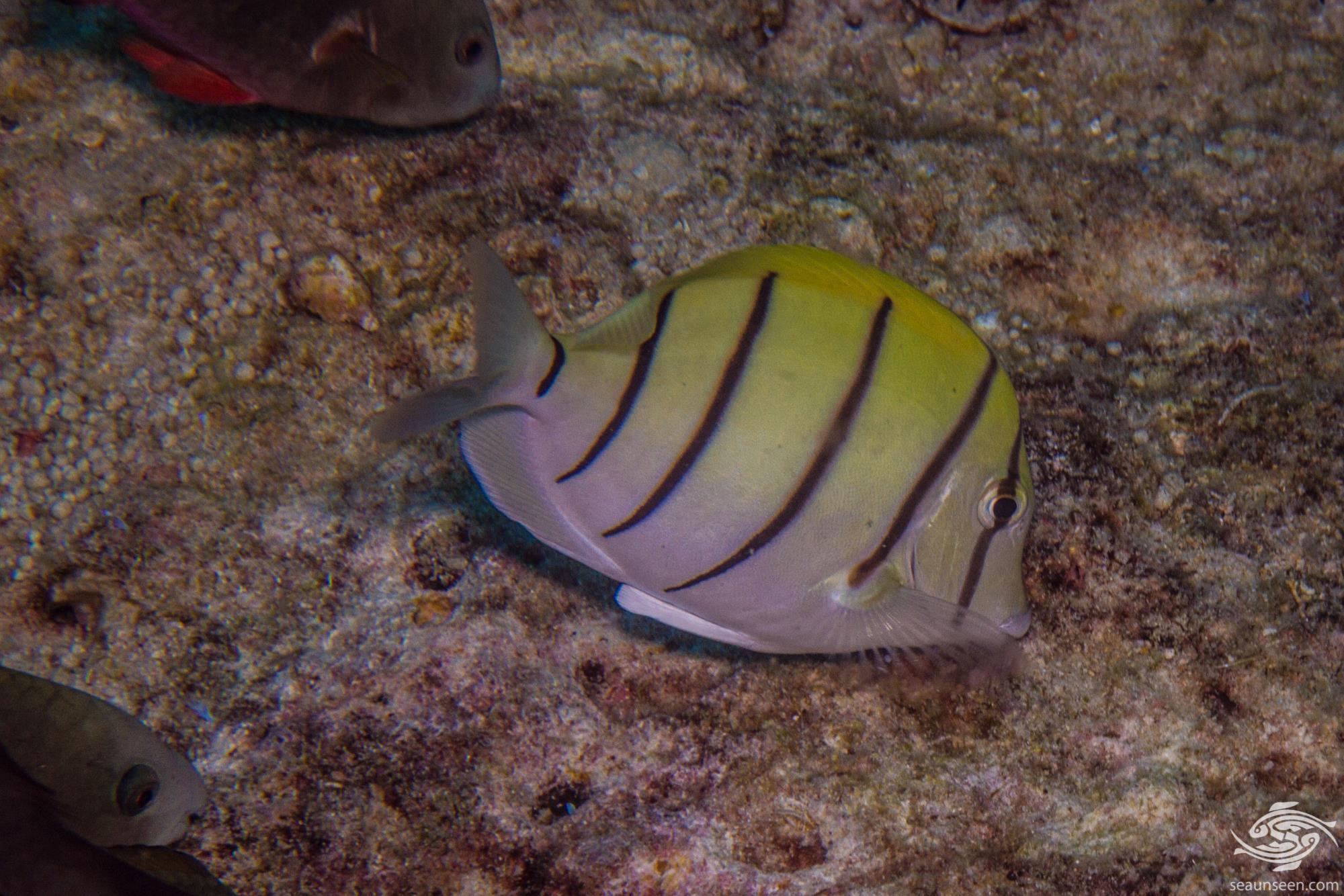 Convict Tang are found across the Indo Pacific area from East Africa to Southern Japan and across to  Hawaii and California although they are considered rare on the California coast. In Tanzania they are most common around the 1 to 5 meter range on shallow reefs and flats with abundant algal growth.

The Convict Tang  feed on algae and have been known to prefer certain species of algae that grow close to freshwater run offs.

Group spawning takes place with the females releasing spawn into the water table ( known as broadcast spawning) and the males fertilizing the eggs. Large aggregations often take place during spawning and there may be tens of thousands of fish spawning together. Once the eggs hatch the larvae go through a planktonic stage before settling down. They become sexually mature at around 10 cm. 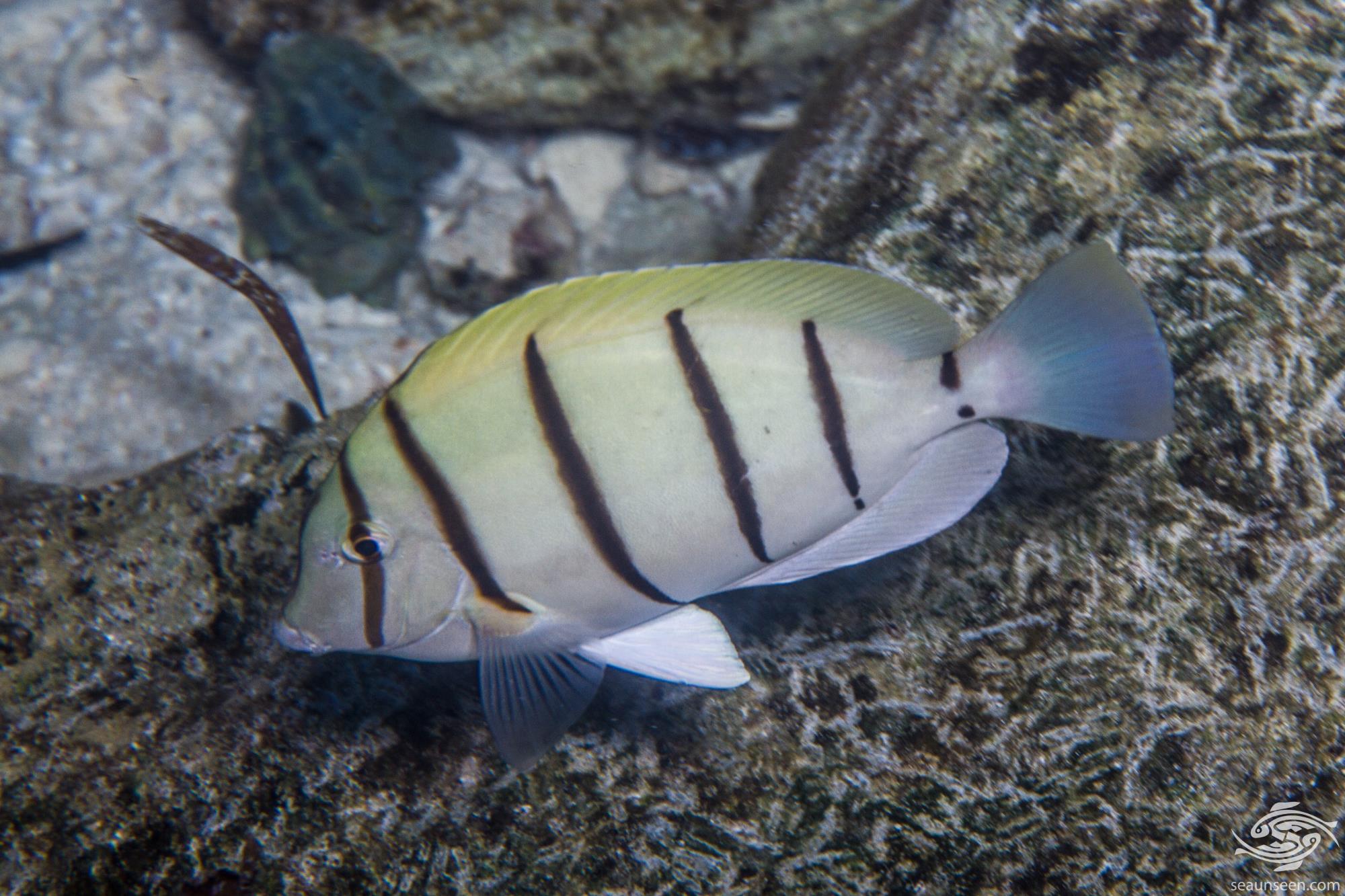 Convict Tang are commonly kept in aquariums, particularly by beginners.  They are  easy to feed and keep but a big part of their diet should be algae in one form or another to keep them healthy. Living in the shallows in their natural habitat they can take large temperature differentials and varying water quality. Great care should be taken when moving them as their blades can easily snag in a net or worst case pierce a bag. They are not the most attractive surgeonfish around but they have lots of character. On the downside they can grow to 20 cm and outgrow smaller aquariums.

Convict Tangs are not a fish that one would expect to be heavily exploited by anyone. However as can be seen in the images below they are exploited in some areas of the African coast. This occurs for several reasons. They are apparently very good eating as are many vegetarian fishes and are a local delicacy in some areas. Secondly they are often found in fairly prolific numbers in the shallows where there is abundant algal growth. Once caught the Convict Tangs are cleaned and then sun dried as can be seen in the images. 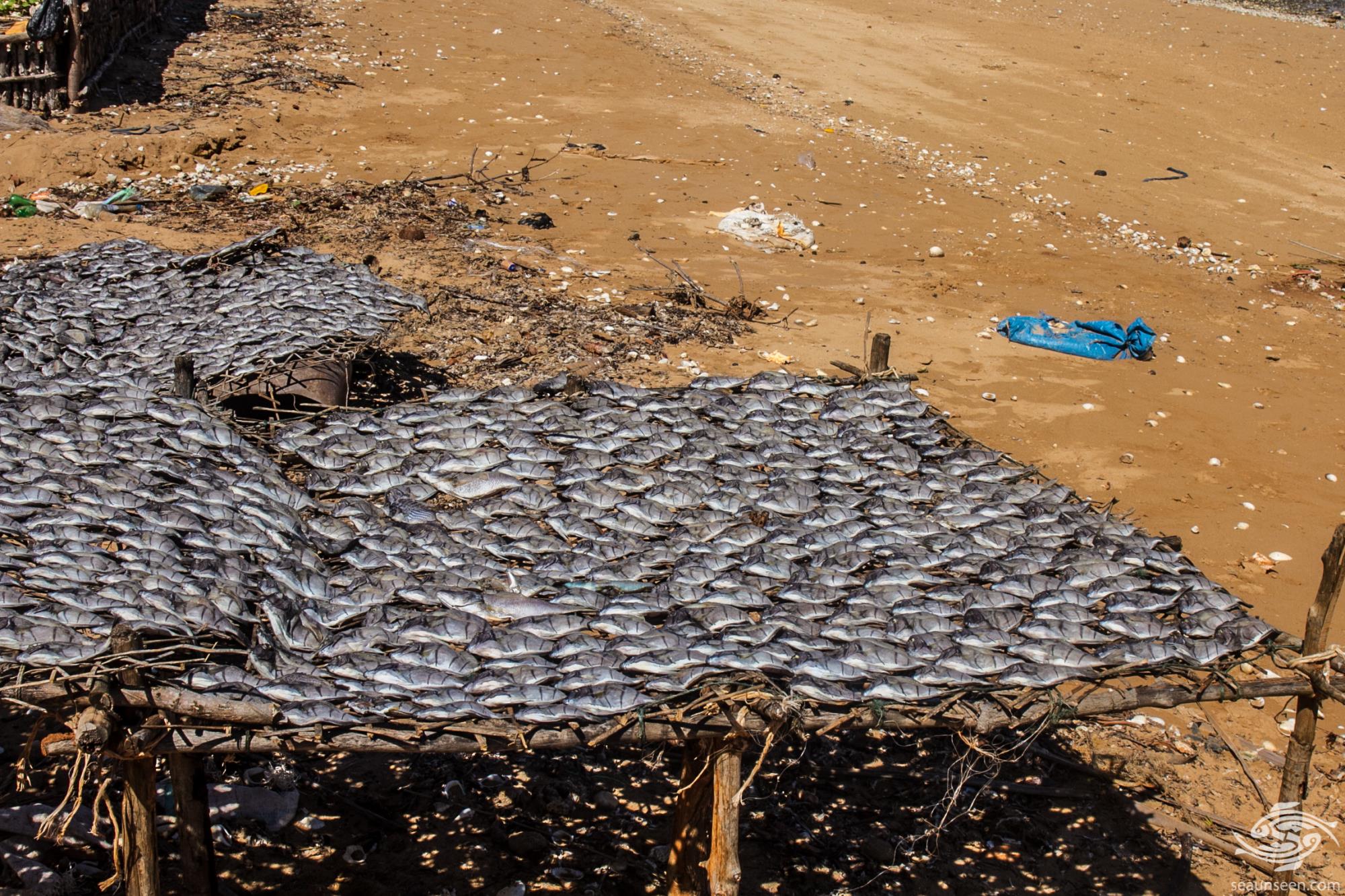 In areas with a large tidal differential this makes it easy to trap large numbers stuck in shallow pools on a Spring tide.  This practice is more prevalent in areas with large tidal flats. In other parts of their range they are similarly exploited as a food source. 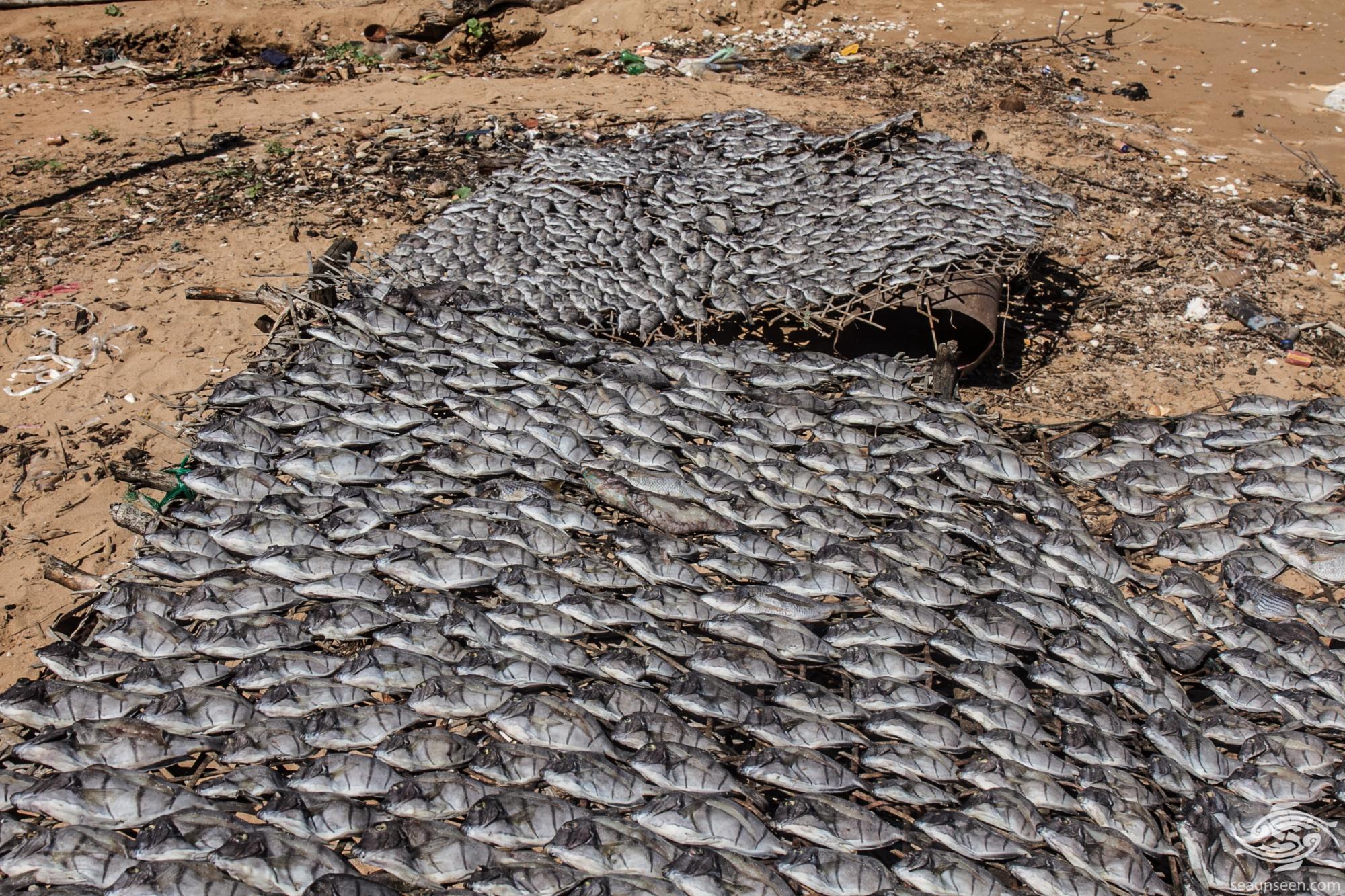