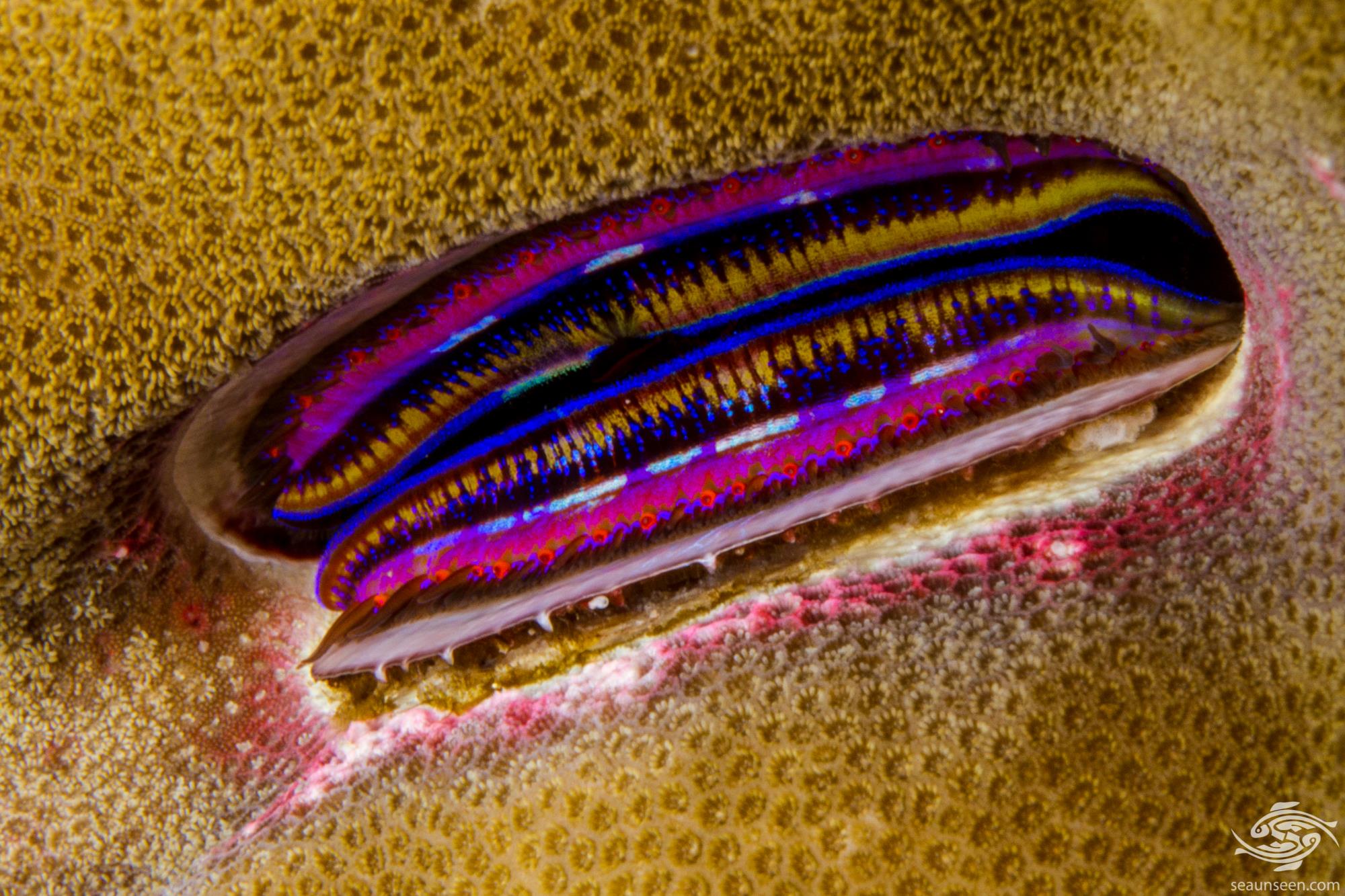 The Coral Scallop (Pedum spondyloideum) is also known as the Iridescent Clam and the Blue Lipped coral Oyster. They are however scallops.  They reside within several species of hard stony corals, but are more commonly found in Porites species. They are common in Tanzanian waters and because of their bright colours are easy to spot.

Because they are embedded in the corals, all one can see of the Coral Scallops are their colorful bodies when the scallop is open.  The outer layer on each side contains large numbers of small pink and blue tentacles with numerous red eyes. The inner layer is dark blue and on some specimens dark blue and yellow. They grow up to 8cm in length and 4.5 cm in width. 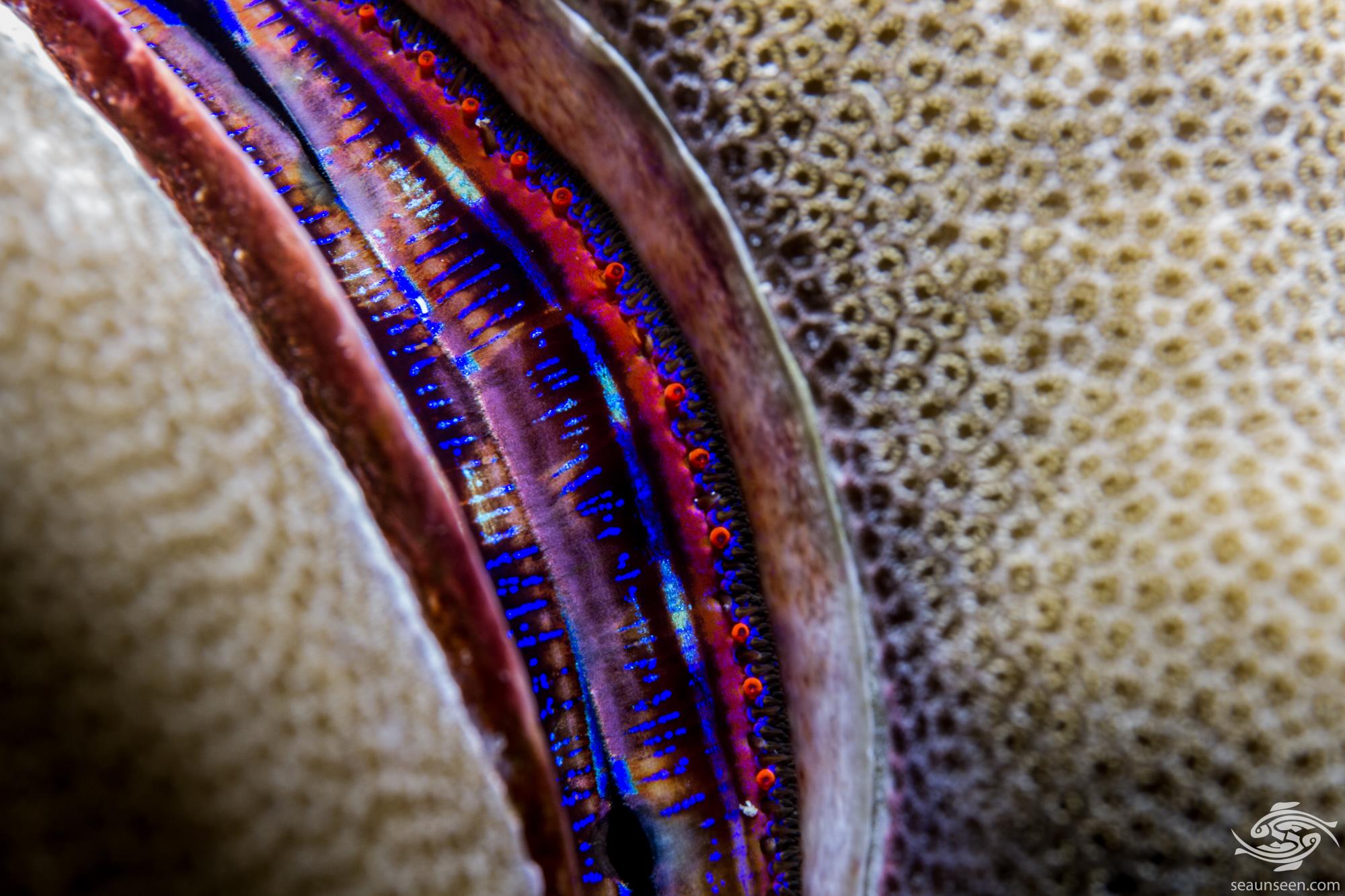 Scallops have up to 100 eyes and these eyes function in a very different fashion to normal eyes. Instead of using a lens to focus, they rely on mirrors instead.  If you ever try and sneak up on them while they are open to photograph them, they are difficult to get close to and more often than not they close once one gets close. The eyes are used for defensive purposes and are very sensitive to light changes. There is a very good explanation on how the eyes work in the video below.

CORAL SCALLOP IN THE WILD

Coral Scallop are found on most reefs with hard corals in Tanzania. They are difficult to photograph open and it seems to be easier to photograph them at night. During the day they invariably shut when one approaches them. They have an interesting life cycle, the juveniles attach on to the exterior of the coral which then grows around them. The exact mechanism that prevents the coral from growing over them is not truly understood, but it appears that it is both chemical and physical.

If one looks at the images, one will note that the nearest two layers of polyps to the clam are generally always dead and presumably the polyps are killed chemically.  There is often a pinkish mark on the coral around the scallop’s hole and this could be the chemical or the chemical at work.  As the coral grows outwards so the scallop grows outwards.

BENEFITS TO THE CORAL

Some research appears to show that the scallops provide protection for the corals against predation by the Crown of Thorns Starfish. It is thought that by spurting water onto the underside of the starfish that they are chased off. 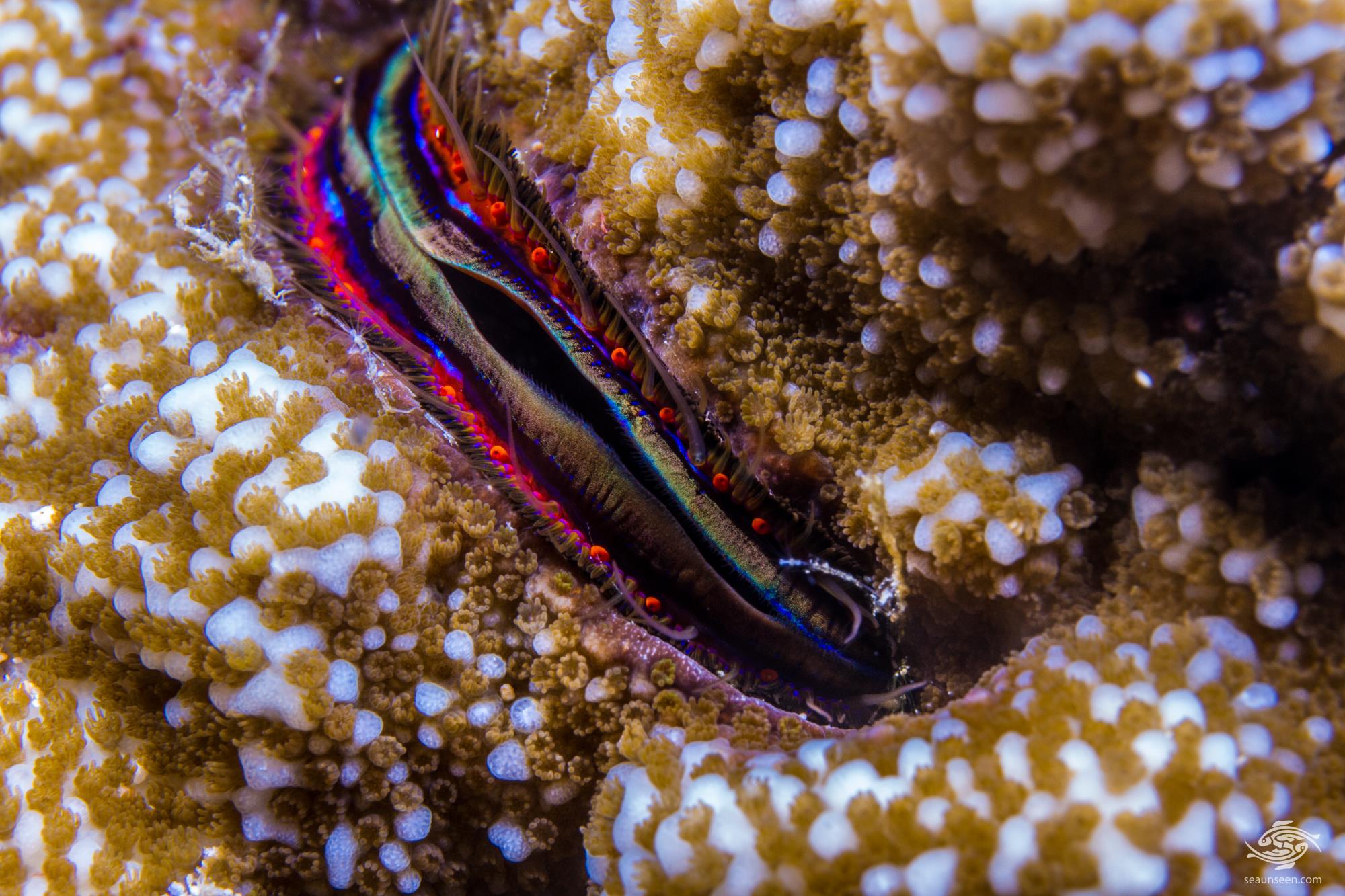 The Coral Scallop is found across the Indo-West Pacific region, from the east coast of Africa including Madagascar to Micronesia and Polynesia, the Coral Sea and the Philippines. Along the Australian Coast they are found on the west coast of Australia, including Lord Howe Island. 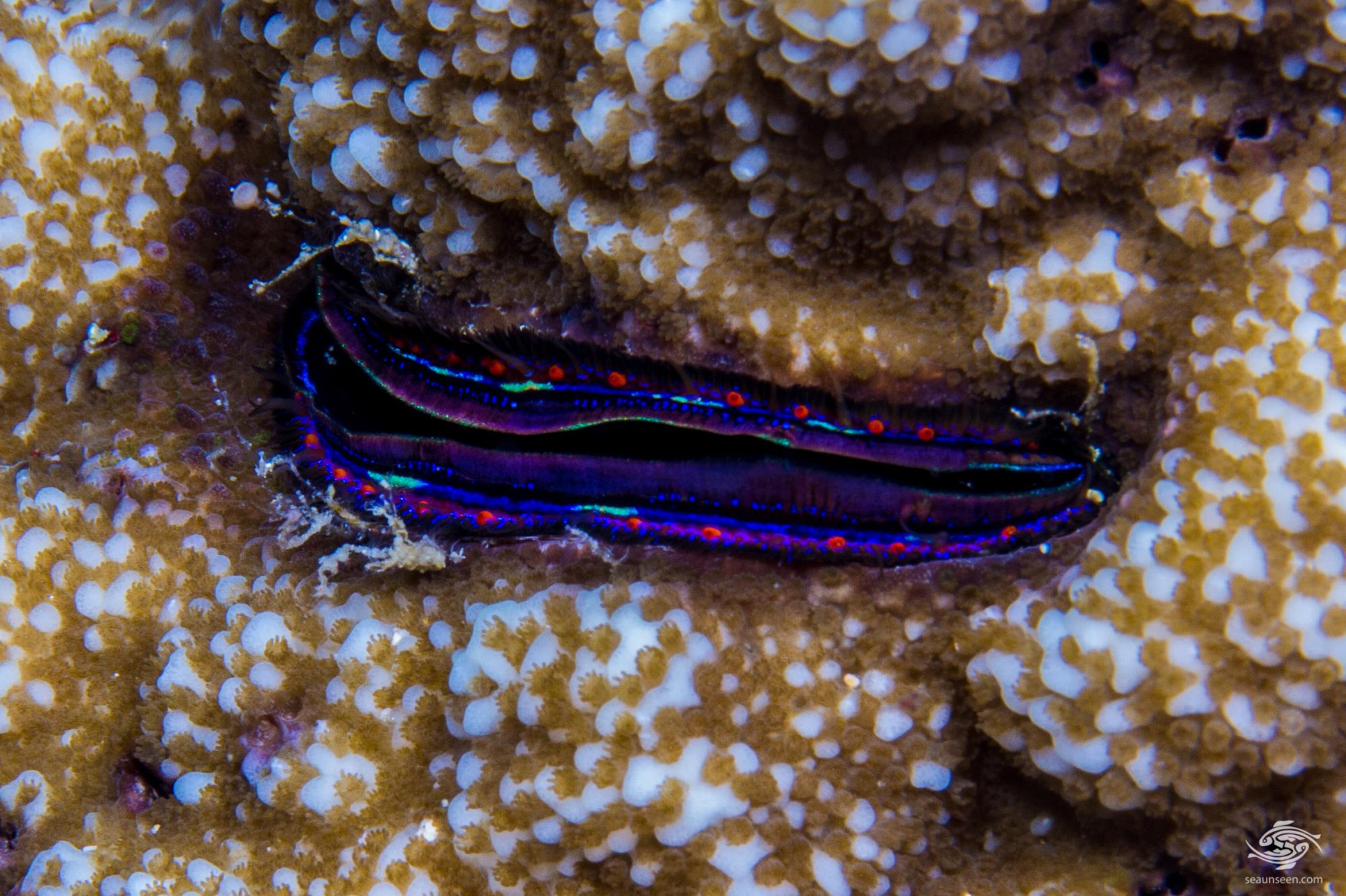 The Coral Scallop is a filter feeder and feeds on plankton. Water movement deposits the plankton on the filtering structures on the clam and these are then moved through into the mouth and are digested in a gland. Waste products are then passed through the intestine and out the anus. 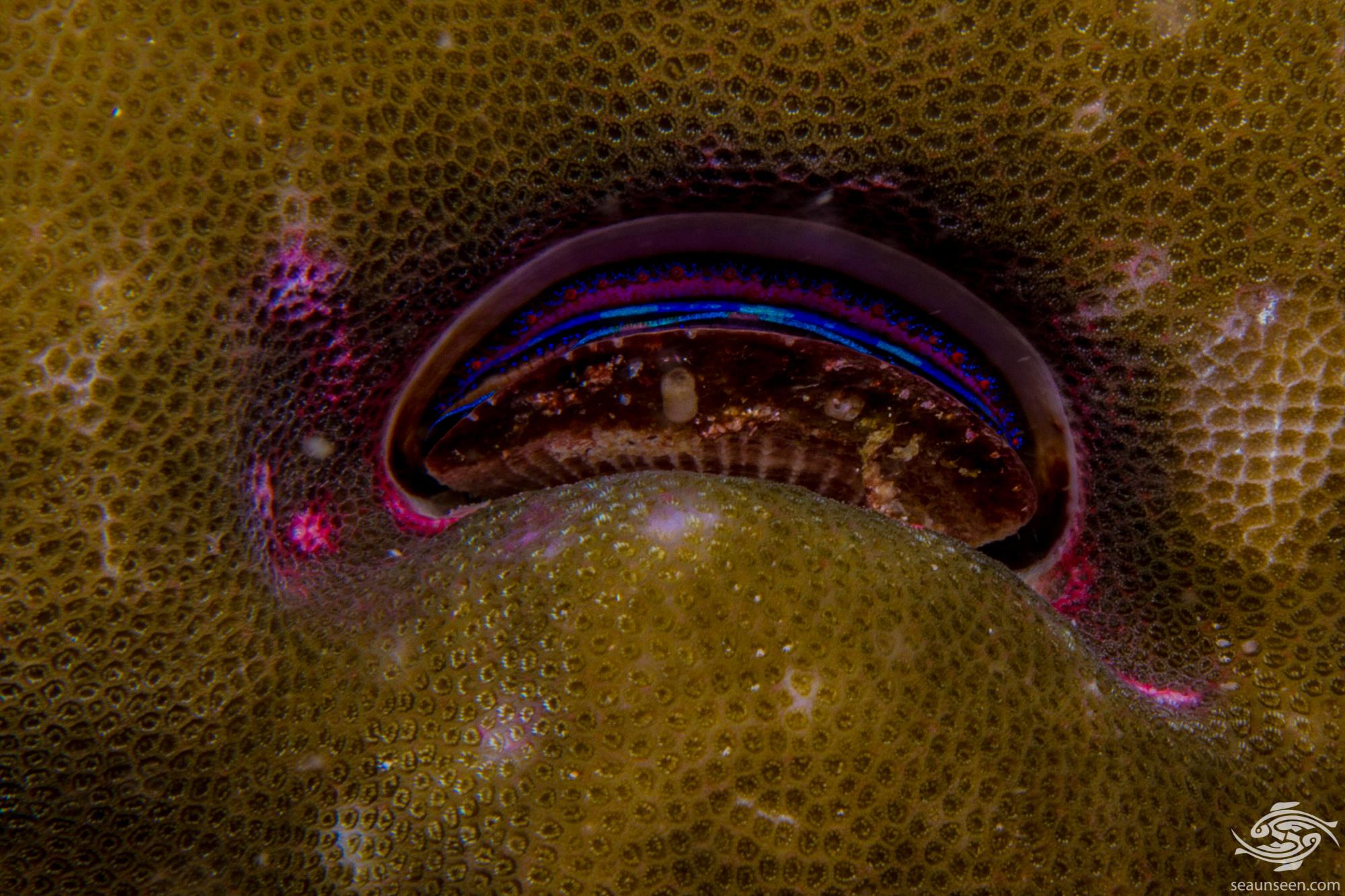 There seems to be little literature on the reproductive habits of the Coral Scallop. Scallops are either dioecious with the sexes being distinct, others are simultaneous hermaphrodites having both sexes and others are protoandrous hermaphrodites being males when young then later switching to be a female.
Eggs and sperm are released into the water table and once fertilised the eggs hatch and enter a planktonic stage and then develop into young adults who attach to the substrate. 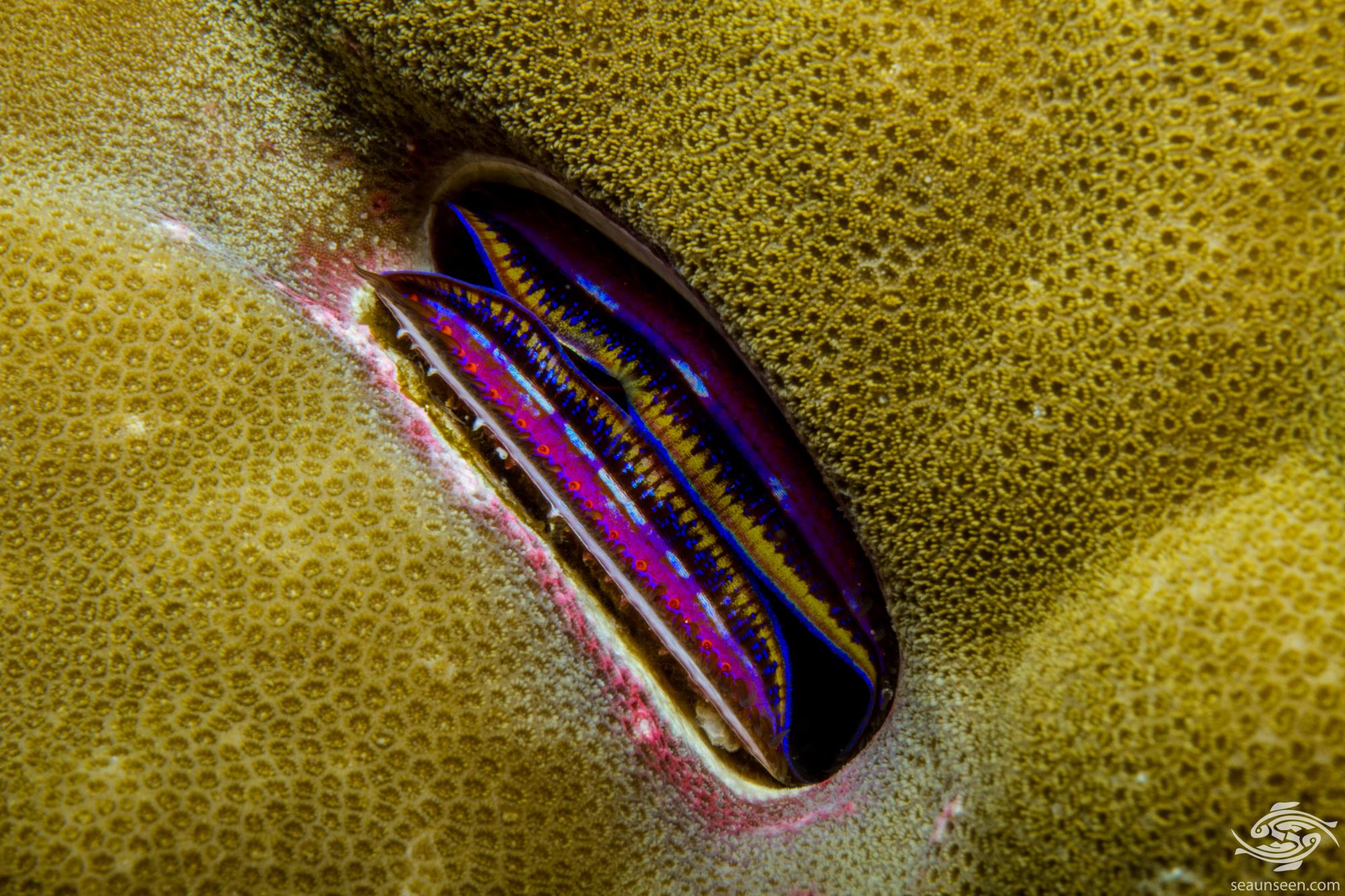 Because they are embedded deeply in hard corals, they are not exploited per se. However in some areas hard corals are broken up for the manufacture of lime based cement or for building blocks and habitat degradation is an issue.