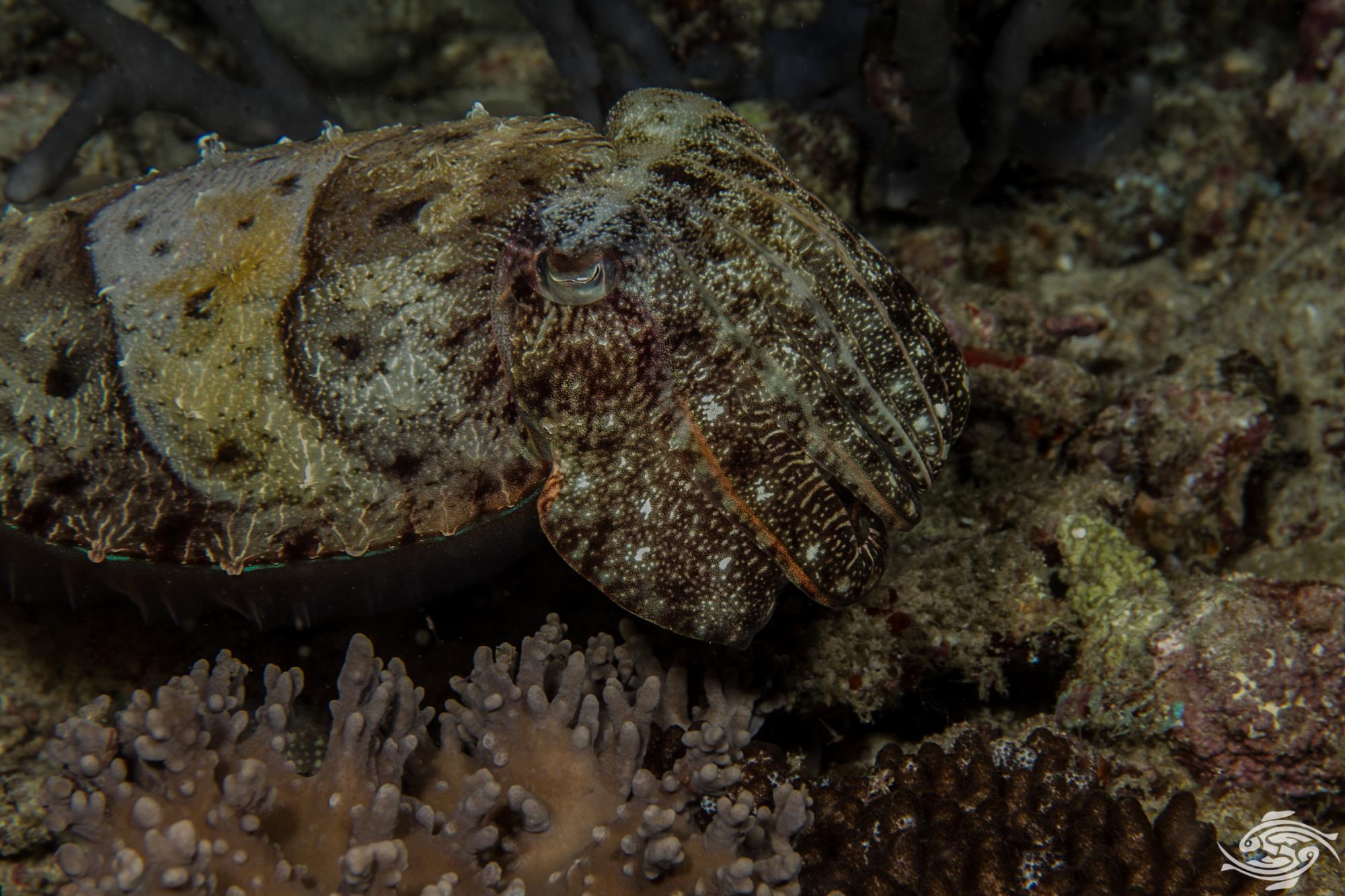 Cuttlefish are marine mollusks rather than fish as their name misleadingly suggests, with some rather unusual abilities. They have an adaptive camouflage system, a sophisticated liquid gas buoyancy control mechanism, jet propulsion, along with incredible eye sight and enhanced underwater sensory abilities. They also have a stealth mode. A military scientist’s dream.

It may seem hard to believe but the cuttlefish in the image above and below are the same specimen, giving one an idea of just how dramatically they are able to change both their skin texture and their colouring.  The process takes a mere few seconds.

They fall within the order Sepiida and belong to the class Cephalopoda along with squid, octopuses and nautiluses. They are found all over the world except the Americas.  Their name is derived from the cuttlebone which many beach goers have seen washed up on beaches, which distinguishes them from their relatives the squid and octopus. They also have a very high brain size to body weight ratio, being among the highest among the invertebrates, allowing it its unique abilities. 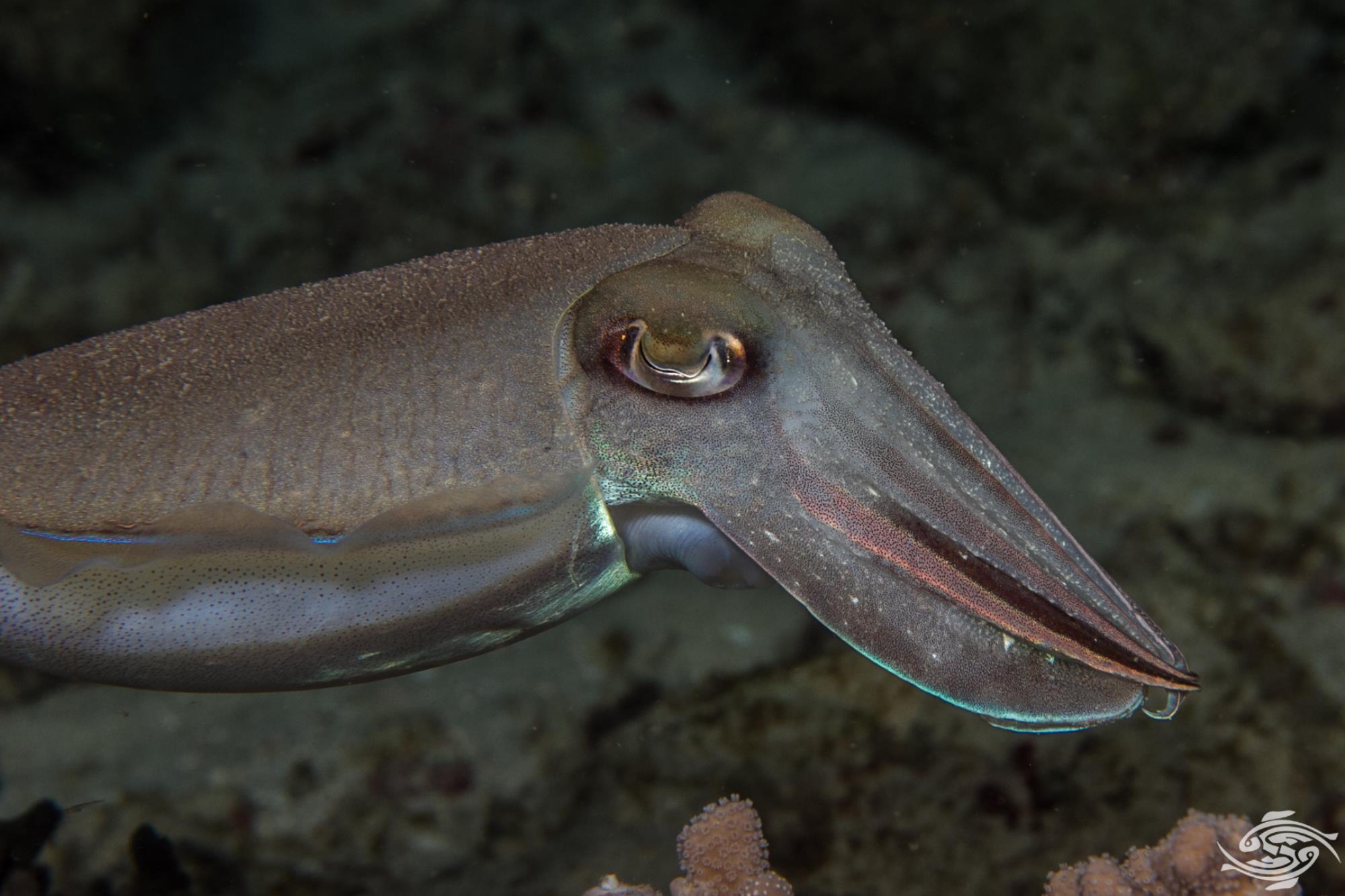 Cuttlefish have eight arms with suckers on them and two tentacles which are longer than the arms. These two tentacles are used to catch prey using specialized suckers that grasp the prey.  The arms are usually folded close to the body when not in use. Unusually, they have W shaped pupils which give them the most acute polarized vision of any animal known to science today. The cuttlefish world as they see it looks very different to ours.

Cuttlefish have three hearts, one for each gill and one for the body. Their blood is a blue green colour as the chemical haemocyanin is used to carry oxygen and this contains copper. They range in size from eight centimeters to 52 centimeters and some are brightly colored. 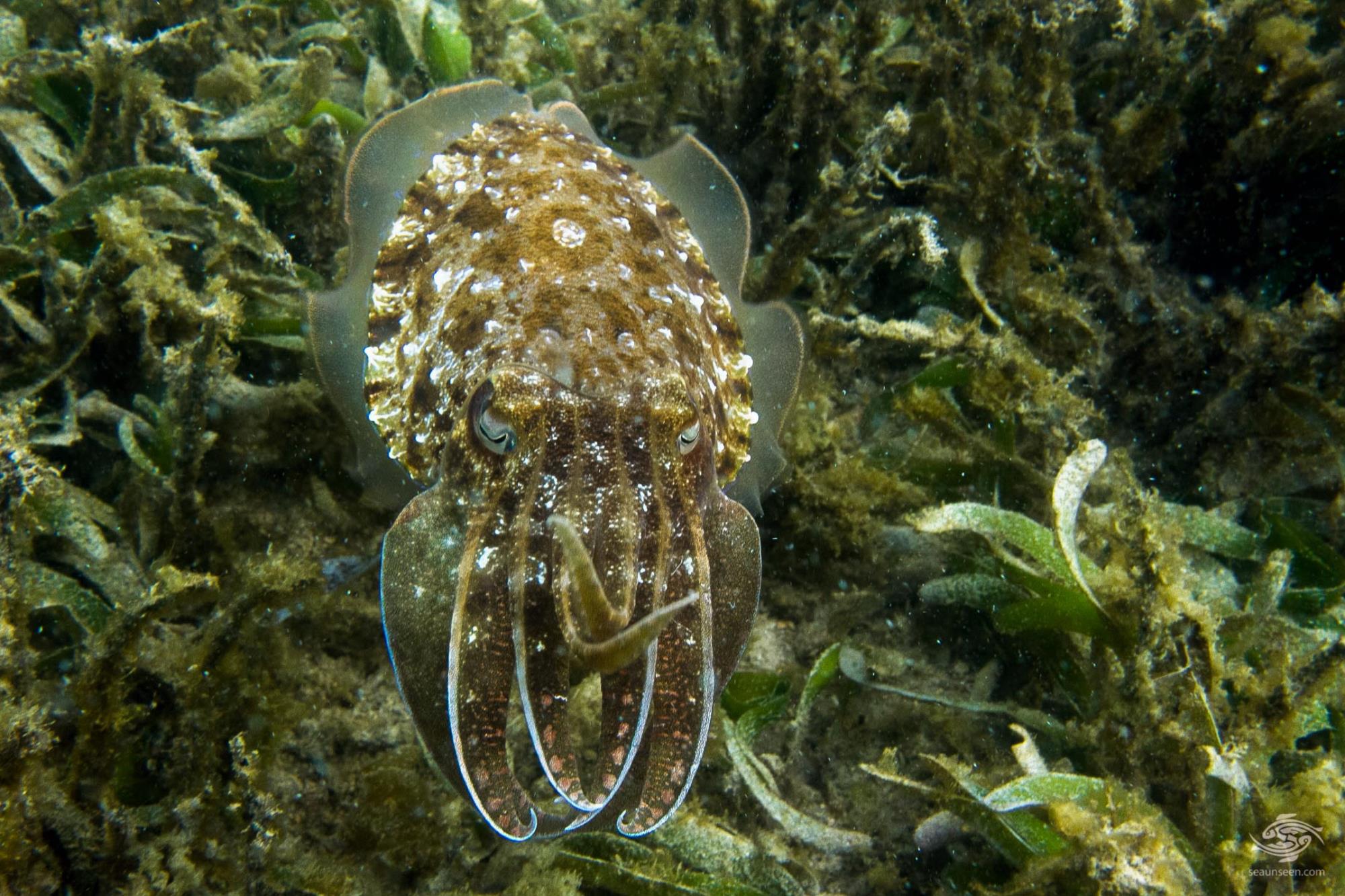 Perhaps what is all the more astounding is that cuttlefish are color blind. Yet they are able to perfectly match their surroundings. This occurs  through an unknown mechanism not yet understood, but possibly relating to an effect of polarized light that humans cannot see. Many people will have tried polarized sun glasses at some stage and will have noted some of the differences. The human eye is not capable of seeing true polarized light as the cuttlefish does. 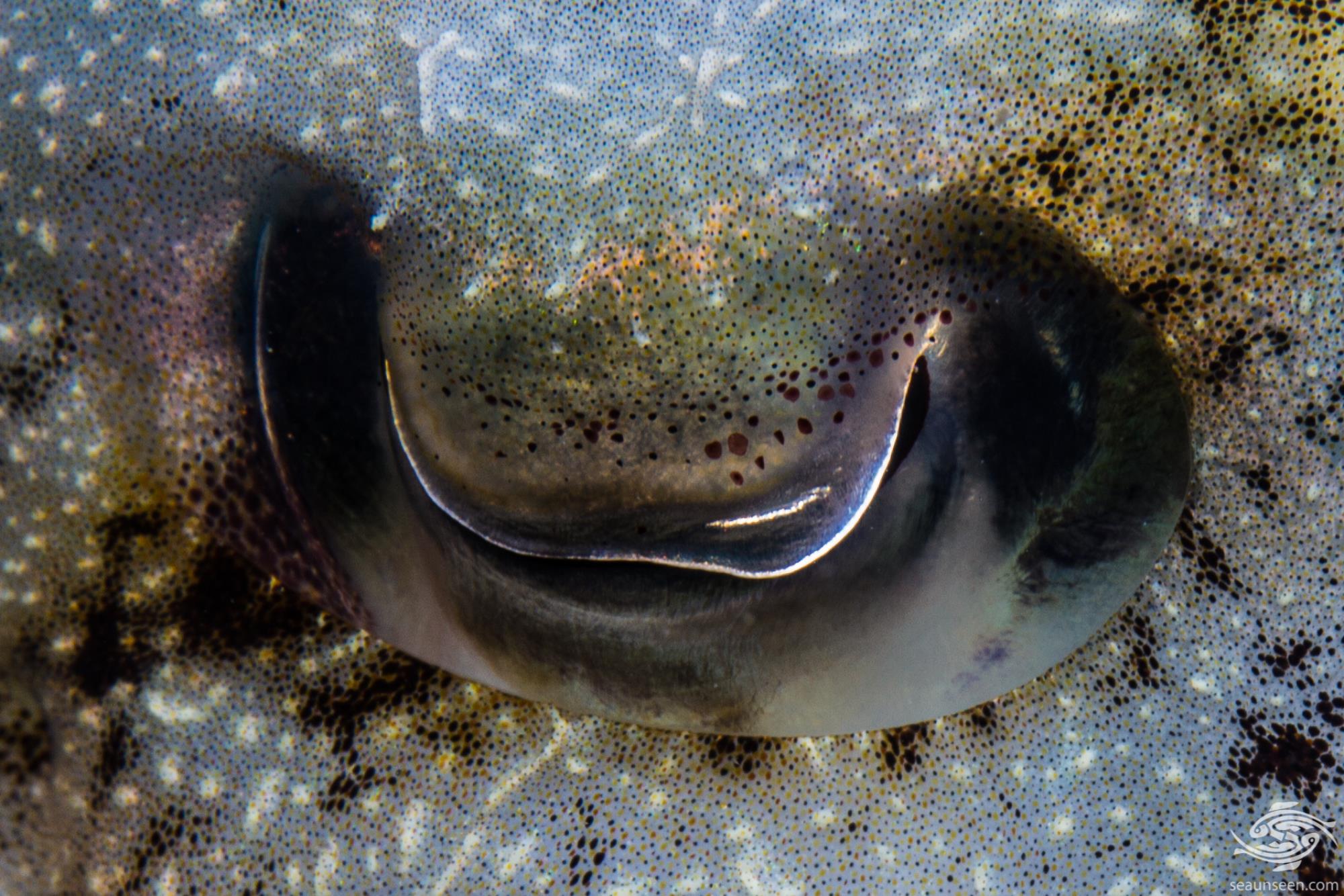 The cuttlefish has specialized areas outside its brain that it uses for processing optic information before feeding this information into the brain. Given the ability of the cuttlefish to perceive polarized light it is quite possible that they are able to communicate with each other through visual changes in ways that we cannot see. The W shaped pupil also gives them a wide field of vision. 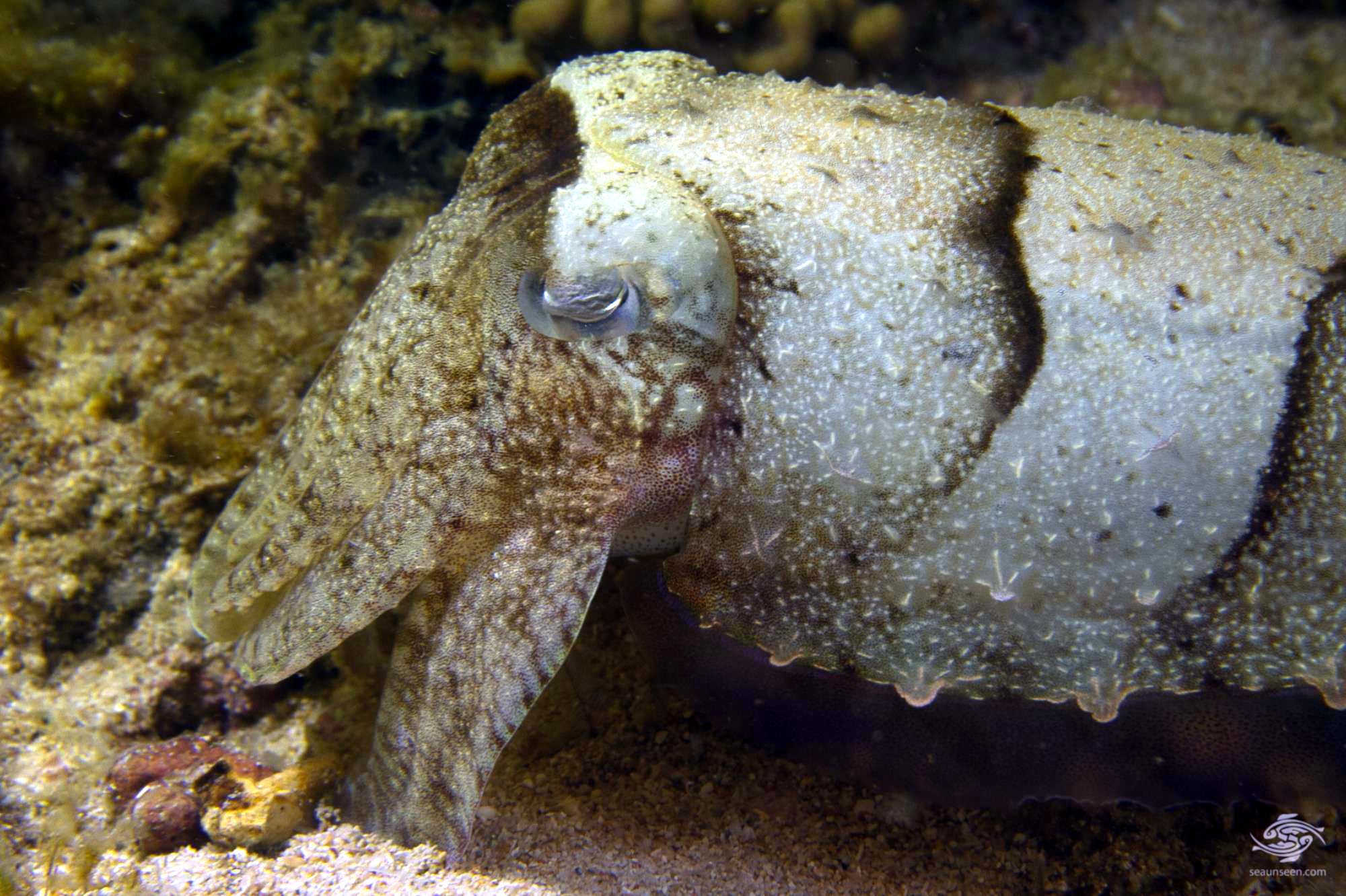 The cuttlebone is a further marvel of animal engineering, acting as a skeleton and being porous. It is made up of a large number of tiny chambers filled with gas. By modifying the gas to liquid ratio in the cuttlebone, the cuttlefish is able to control its buoyancy and keep it neutral most of the time.

They achieve this through changing water pressures in the cuttlebone. The exact mechanism through which it controls these pressures is not truly understood yet.

Another of the cuttlefishes abilities is that of changing colour. They have a three layered skin , consisting of a yellow, red and then brown layer, each layer with millions of chromatophores. Below this it has a further layer of reflective iridophores and leucophores.

They have up to 200 of these specialized pigment cells per square millimeter. By modifying the shape of the chromatopores and the other specialized pigment cells it is able to change color by selectively absorbing or reflecting light of different colors. They can perfectly match their surroundings within as little as one second. It is known to use these colour changes for camouflage, to warn predators away and to confuse prey as well as for mating behaviour.

Not only do they have the ability to change colour, they can also change the texture of their skin to match their surroundings. They do this by raising and retracting small papillia on the exterior of the skin. 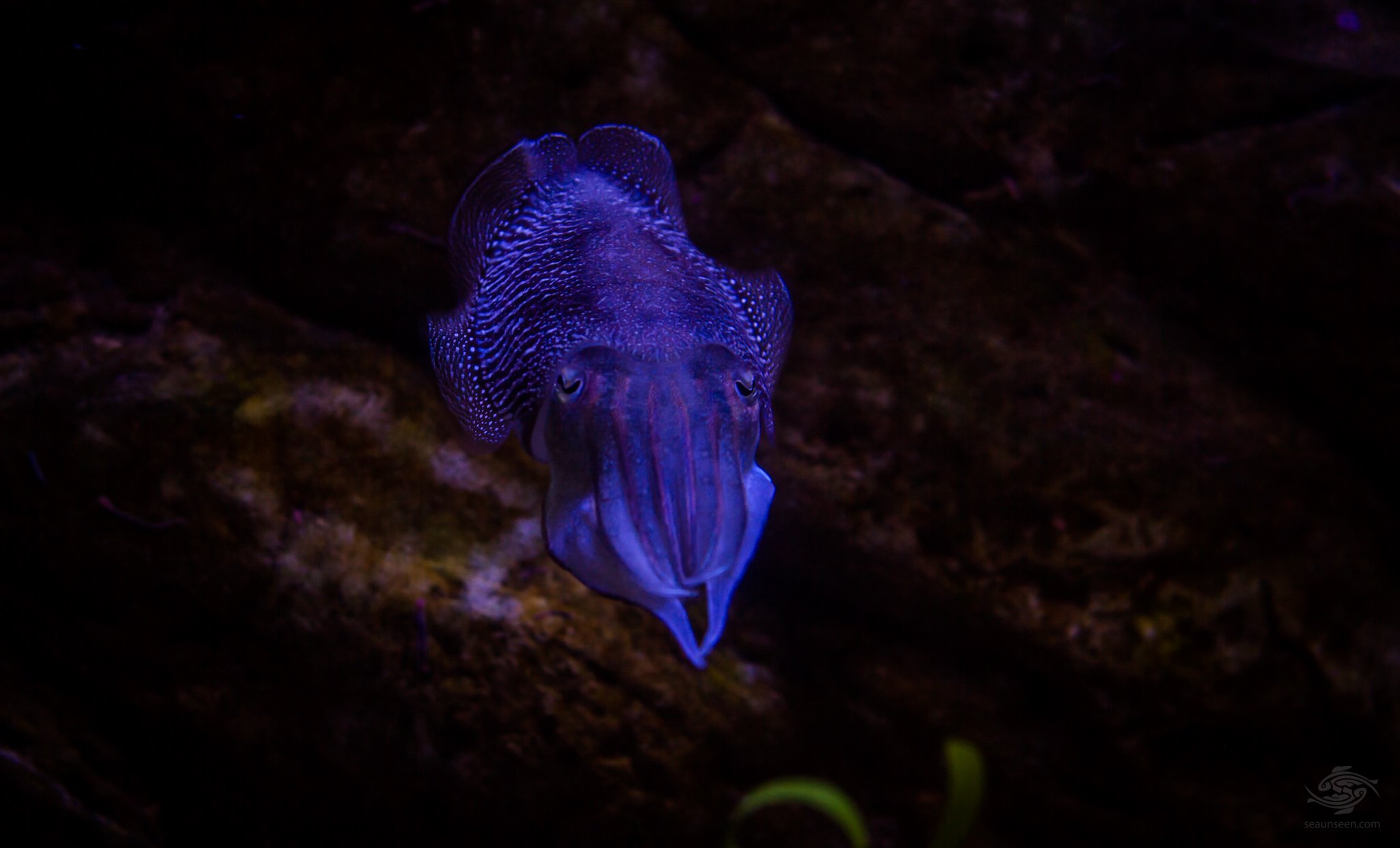 Cuttlefish have a few more tricks up their eight sleeves as well, as a last resort defence against predators they have an ink sack, from which they are able to spray a dark brown dye into the water around them to confuse predators while they make their escape.

When confronted with a predator such as a shark which uses electronic sensors to find their prey, cuttlefish hold their breath and cease movement. This has the effect of reducing electronic activity and their making them much harder to detect. By ceasing the movement of water through the body they reduce the small pressure waves in the water that other predators use to find them.

For movement the cuttlefish have a muscular mantle that skirts around the body. Their mantle is used for primary mobility and by using an undulating wave pattern in the skirt the cuttlefish is able to move its self in any direction with great precision. For fast movements water is expelled from the mantle cavity via the cuttlefishes siphon. By squeezing water in and out the cavity the cuttlefish is able to jet its self out of trouble.  The siphon can be directed in any direction and can be clearly seen in the image below. They also use their water jet from the siphon to expose prey hiding under the sand. 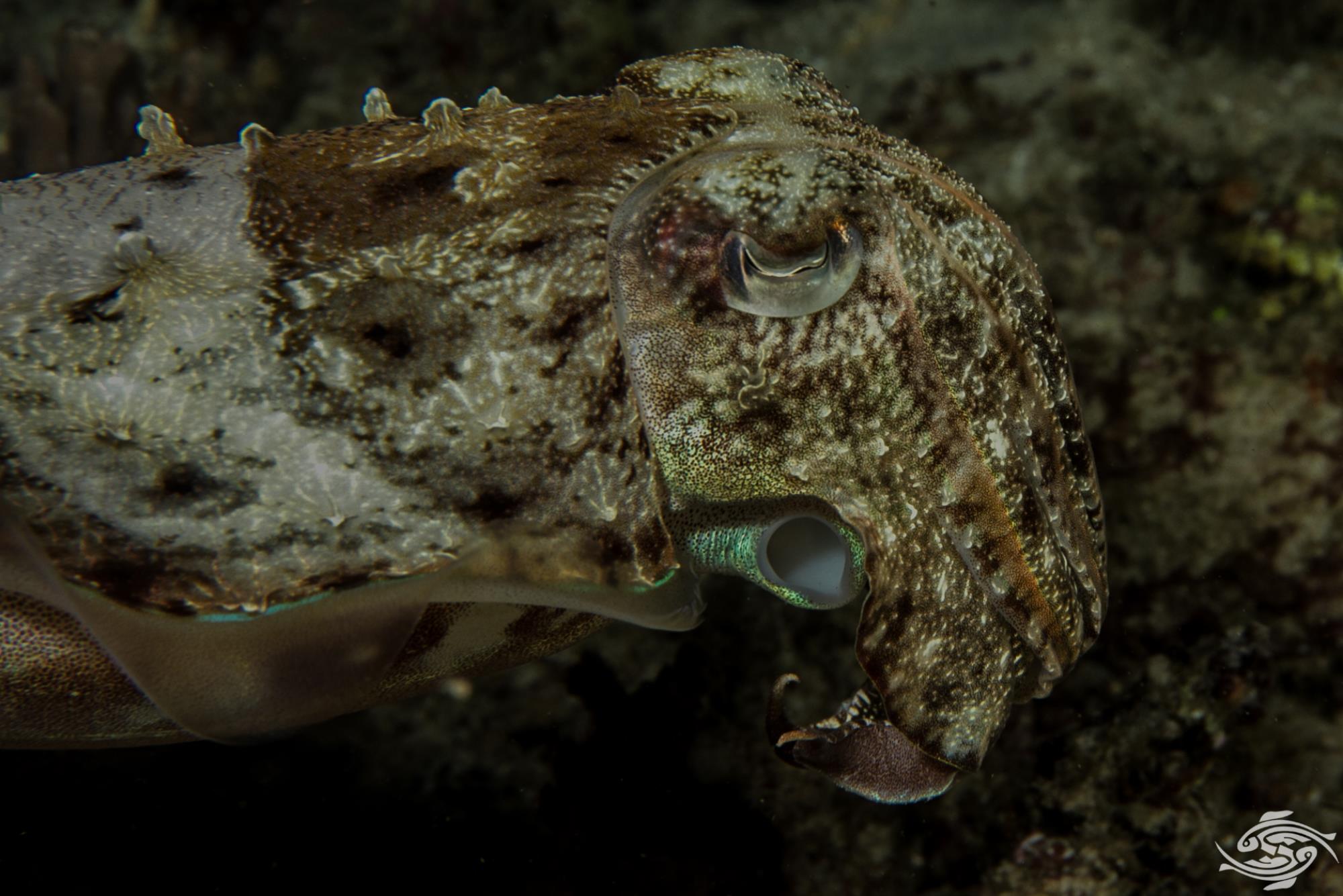 To assist in detecting its prey the cuttlefish has lateral lines similar to those of a fish, which are composed of very small hairs sensitive to vibrations. These allow it to “hear” movement in the water around it, a sense that can operate in extreme darkness. These lateral lines provide a defence against predators as well as allowing them to sense prey.

Once a cuttlefish has detected its prey, which are mainly fish and crabs, it will stealthily approach within striking distance. The cuttlefish will then open its arms, and shoot out its feeding tentacles which grasp the prey and pull it back into its arms. It has a parrot like beak it eats with.

Below is a video of a Broadclub cuttlefish, Sepia latimanus out hunting at night. Filmed on Kankadya reef in Dar es Salaam, Tanzania.  The speed and accuracy of his strike is quite something to see. Although they are difficult to approach during the day, at night it is possible to get really close to them without them seeming to mind. Indeed sometimes they follow the dive lights and use the lights to catch prey, another indication of their intelligence.

Perhaps though  through its mating habits the intelligence of the cuttlefish can be seen. The males have specialized legs which deposit sperms in a receiving sack of the female near her mouth. There are many more males than females, as many as four to ten males for every female. Competition for females is therefore fierce and usually involves posturing by the larger males in efforts to win the female. Once a larger male has mated with the female he will attempt to guard her until she has laid her eggs. This because other males can remove his sperm packet and replace it with theirs.

However, some smaller male cuttlefish have the strategy of changing color and hiding a pair of their arms. Females have two sets of arms whereas males have three and pretending to be a female. They sneak past the guard male in this guise. They then mate with the female who has the ability to choose which sperm sack to use. More often than not they choose the sperm sack of the smaller male. Thus thought to be perpetuating intelligence within the species.

As an additional trick to fool larger competitors, smaller males can split their coloring down the center. The side facing the female they are courting has male coloration on it. The side facing away from the female towards other males has female coloration on it. This fools males guarding the females into believing they are females and allows the smaller male to mate. 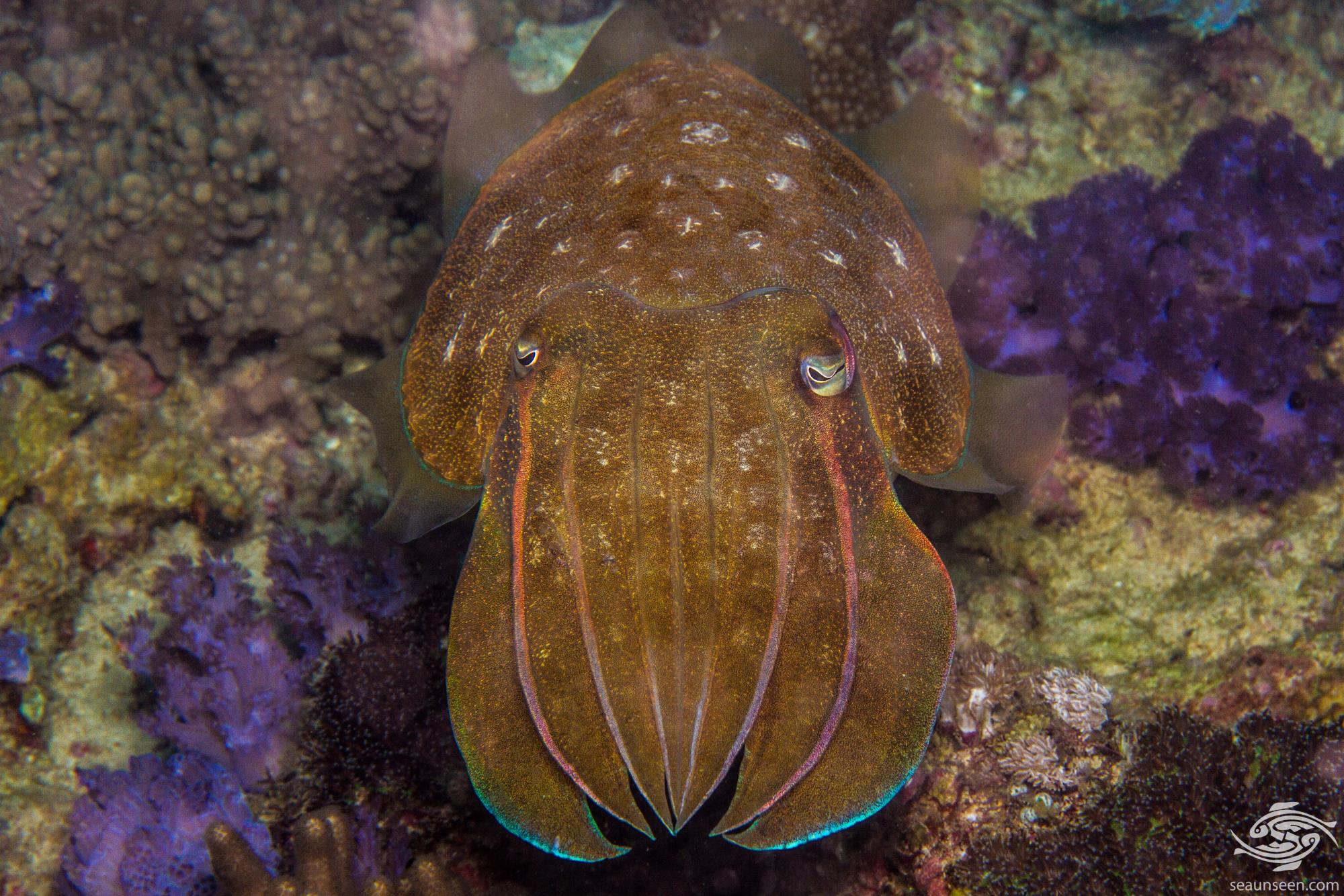 An informative and funny video about Cuttlefish: