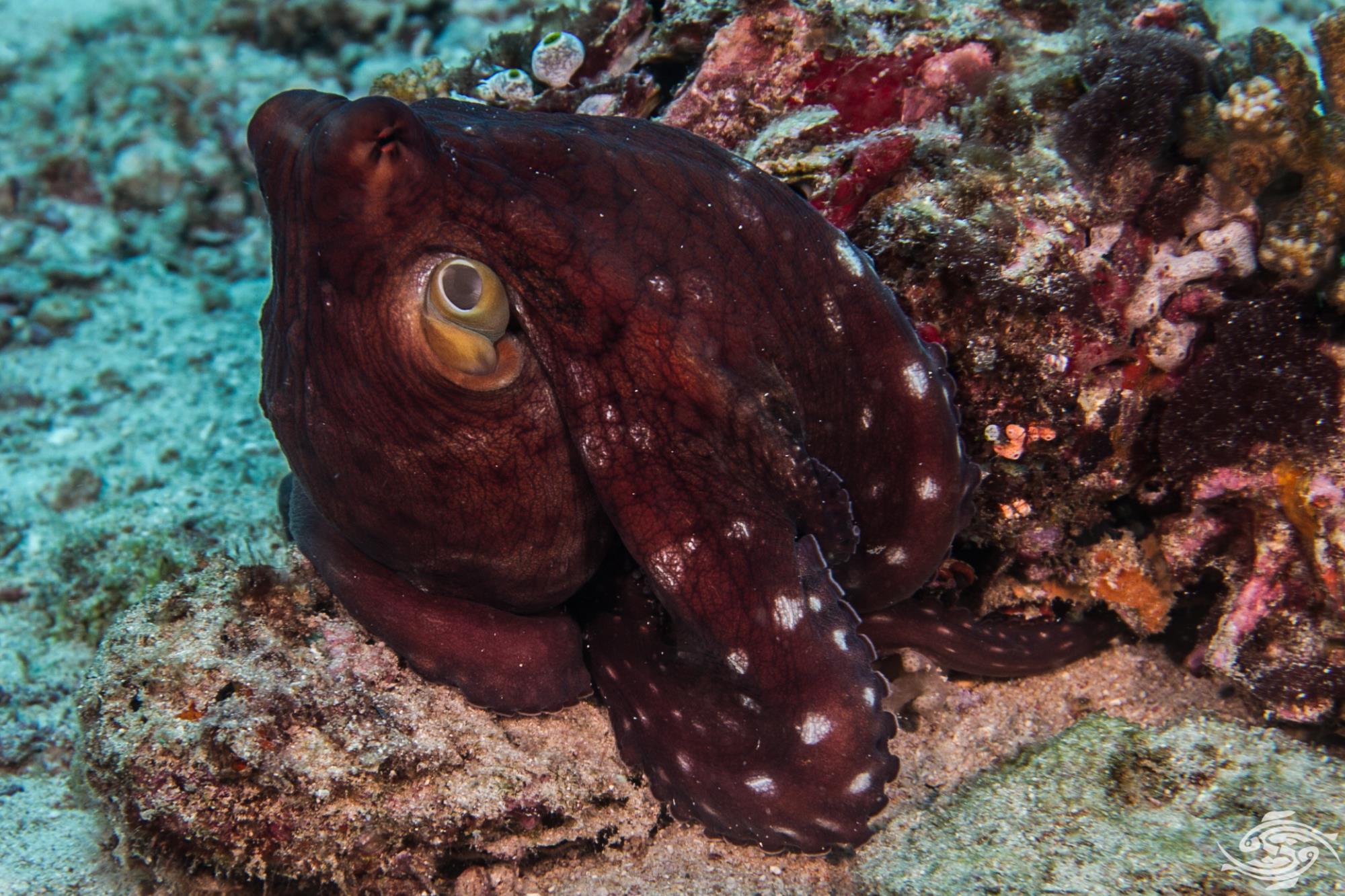 The Day octopus, Octopus cyanea is also known as Cyane’s octopus, the Big Red octopus, White-spotted octopus or the Grass octopus. As its name suggests is diurnal and unusually for an octopus hunts during the day. They do however also hunt at night, particularly on the full moon and they are often seen on night dives off Dar es Salaam in Tanzania.

There is some video footage of one specimen below, from a memorable night dive off Dar es Salaam with Rachel Weber and Michael Alcorn. This specimen allowed us to watch and film him out hunting for some 15 minutes. Octopus are reputedly as smart as a dog and this specimen certainly used the occasion of being lit up by the video lights to spend 15 minutes doing some feeding. During the filming he twice went into hiding and then emerged again before finally deciding that he had had enough. 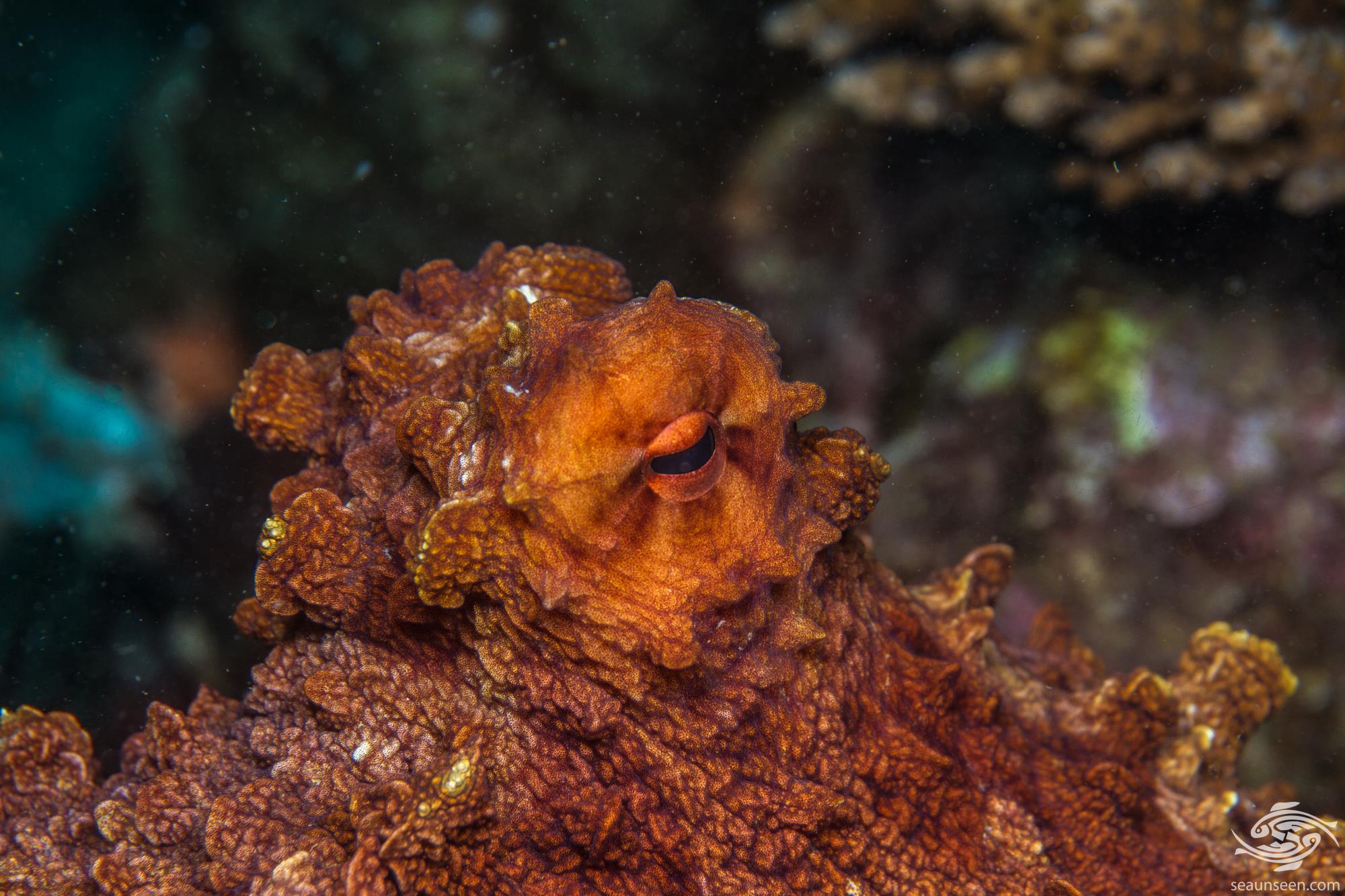 Because they usually feed during the day, the Day octopus is a master of camouflage, having the ability to not only change color, but to dramatically change the texture of their skin to resemble either a rock, coral or seaweed. They are often seen slowly floating across the reef as can be seen in the video below disguised as floating vegetation. They are usually a red brown color and often have white spots or sometimes a white line through the center of the body. When in camouflage mode they are usually a browny color but will often go white to resemble sand or coral.

As with other species of octopus, they are soft bodied and have eight arms with suckers in descending size on them. They are bilaterally symmetrical and have two eyes and a beak. The mouth is in the center of the arms. Being soft bodied they can alter the shape of their body and can squeeze through small gaps. They have a siphon which is used both for respiration and for propulsion by expelling water from it. The mantle grows up to 16cm in length with the arms up to 80 cm long.  The individual above is probably as big as they grow. Weights of up to 8kg have been reported but that is probably rare. 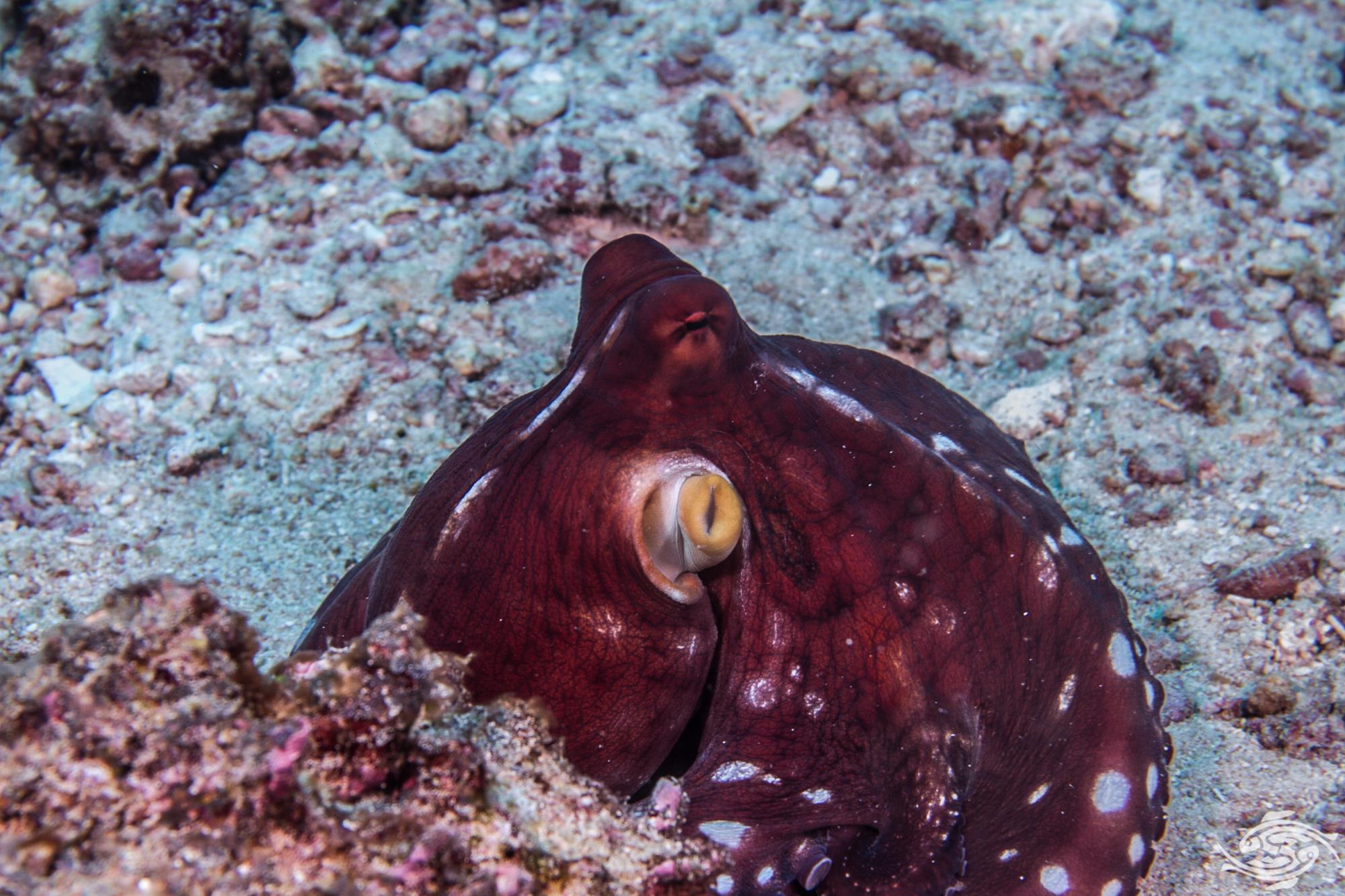 DAY OCTOPUS IN THE WILD

Day octopus are commonly seen on most of the dive sites in Dar es Salaam, usually when they see a diver they will make a bee line for a hiding spot. If the distance to the nearest hiding spot is great they will jet off at a high speed, whereas if there is a suitable hiding spot they will usually quickly crawl into it and will sit and observe the diver.

Fairly often however they will camouflage themselves as a piece of rock or coral. Often they will sit there, allowing one to approach closely as long as one does not make fast movements. Sometimes one can sit and watch them for 5 or 10 minutes and they will sit motionless. If one is lucky they will change color , usually from brown to white or visa versa.

A similar thing happens when diving at night. If one dives with an extremely bright light such as a Bigblue VL30000P  they will actively come into the light and feed in front of you and you can get quite close to them. I have the smaller version of the light, a 15000 lumen model and this does not happen with it. So a very bright light definitely encourages them to come closer. The video below was shot with the VL30000.

They have a comparatively short lifespan of 12 to 18 months in the wild, up to 2 years in captivity. 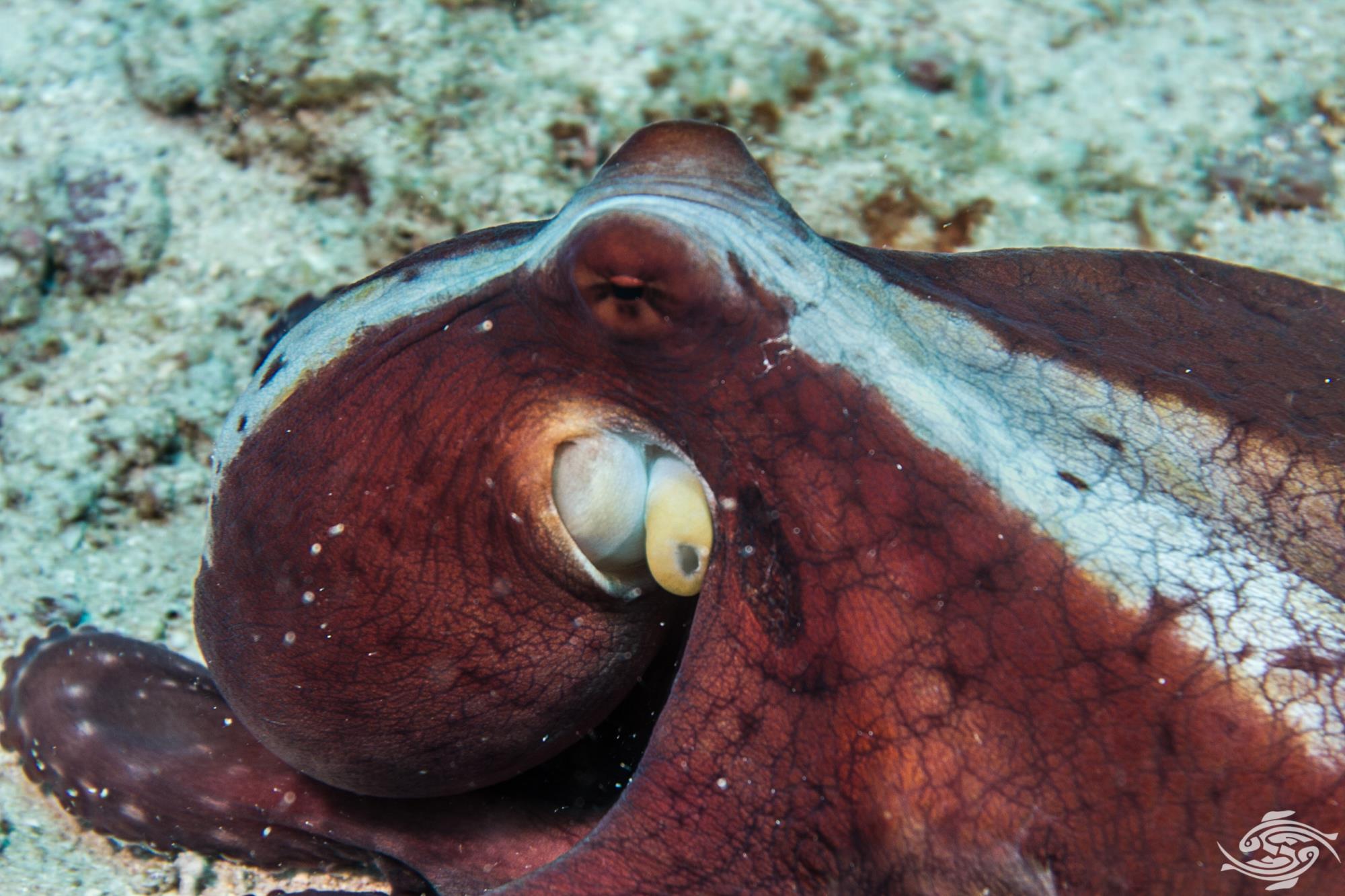 The Day Octopus are found across the Indian Ocean and Pacific as far across as Hawai. They are primarily a shallow water species. 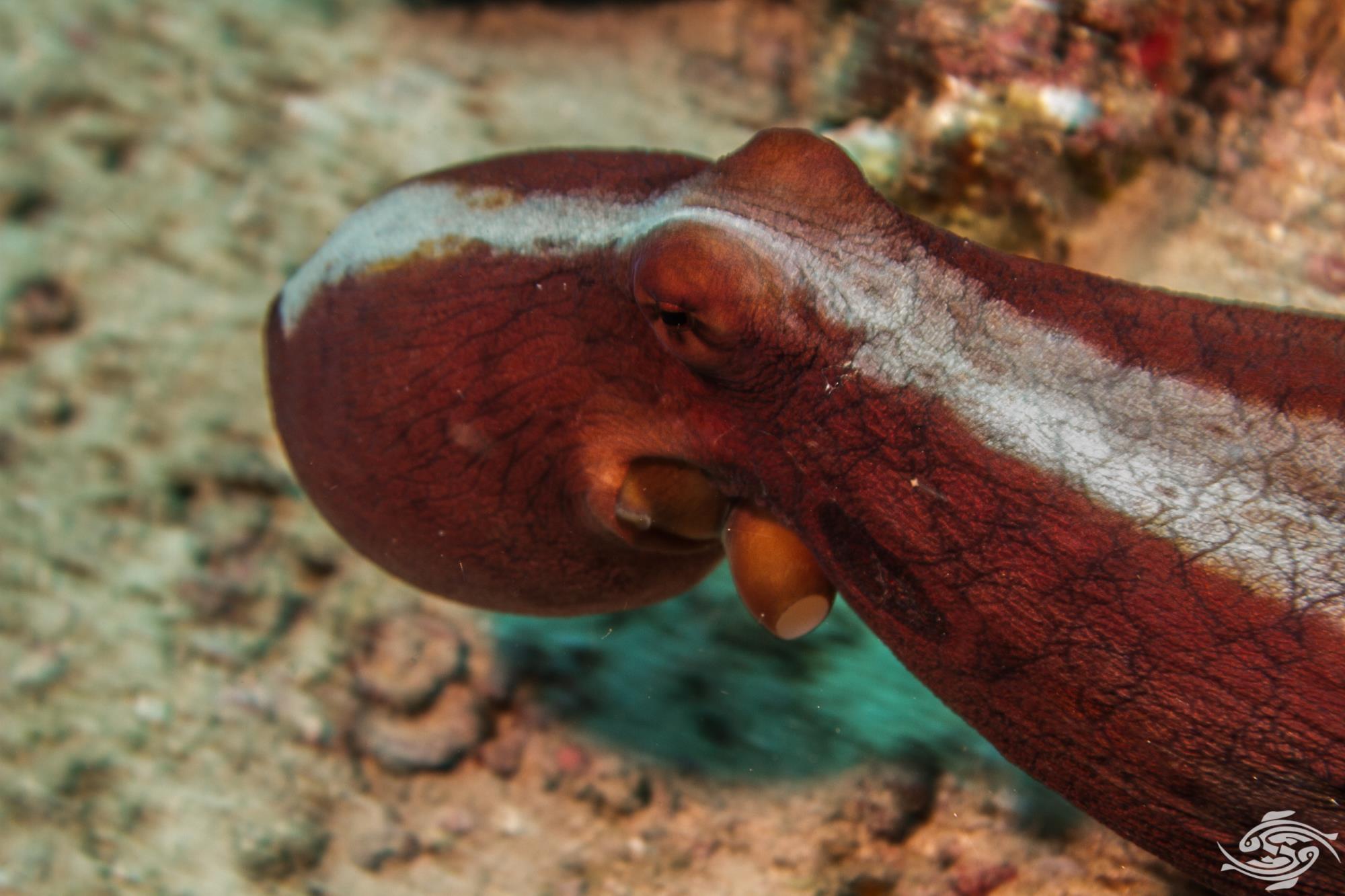 Day octopus primarily prey on mollusks, small fishes, prawns and crustaceans. They are preyed upon by gamefish such as Tuna as well as the larger reef predators such as moray eels or groupers. They have been observed feeding by two methods. Grasping prey with their arms and by enveloping their prey with their body and arms in an umbrella like shape. The prey is then pulled into the mouth area and the sharp beak is used to bite pieces off the prey. In the video below if you watch carefully you can see both these behaviours.

This specimen in the video has part of one of its arms missing and this is fairly common to see. They have the ability to regenerate their arms. They will always have a favorite hiding spot or den and will usually take larger food items back to the den. The remains such as shells and crustacean carapaces are pushed out the den. The debris pile is a giveaway as to their hiding spot and provides information on their diet. At the end of this video below you can see the octopus sealing its self into its den by pushing sand up against the entrance. 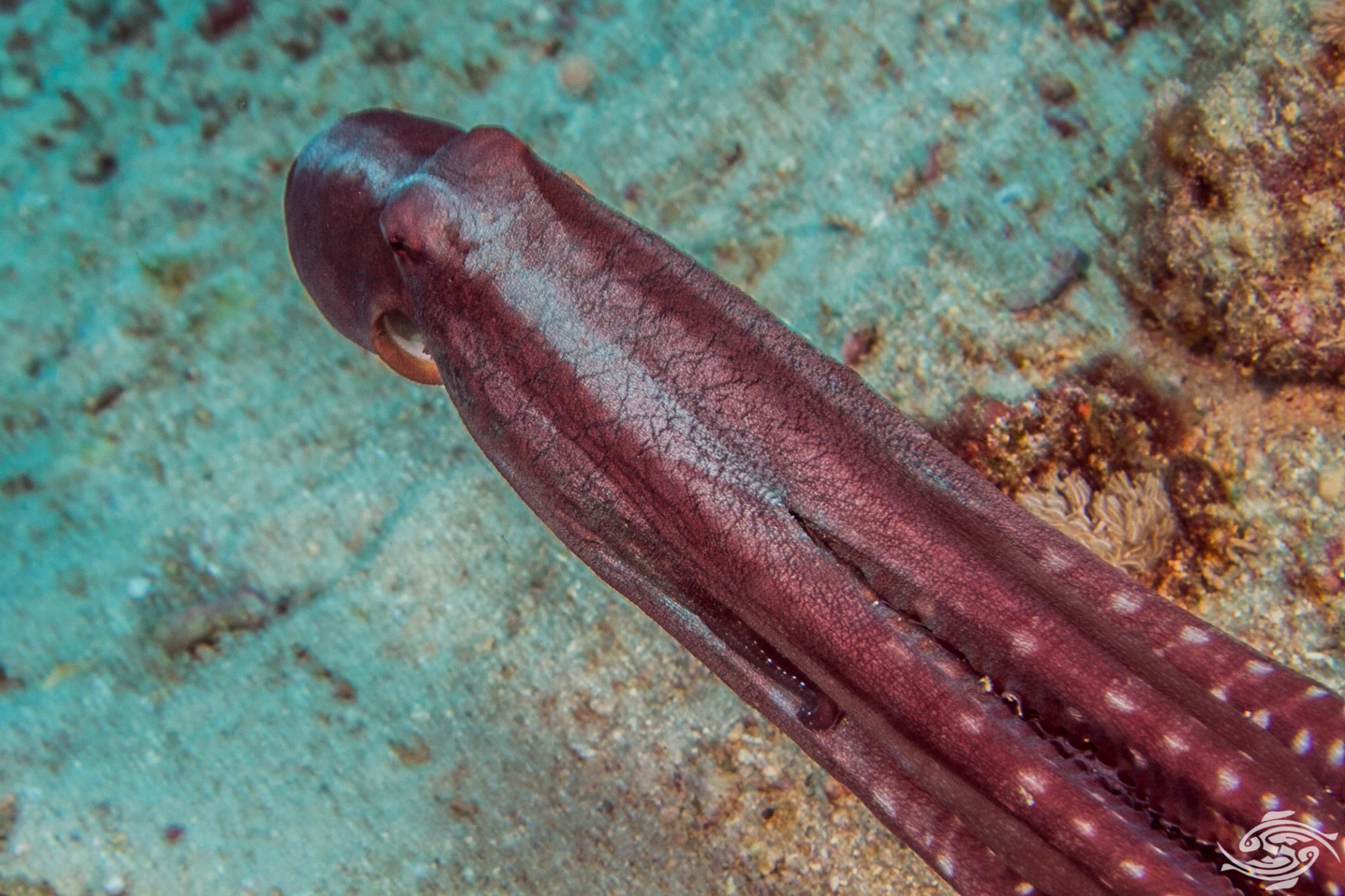 The males have a modified third arm which is used to place a sperm package in a specialized receptor area in the female. Particularly during spring and in summer it is reasonably common to see two of them together grasping each other. Presumably this is the mating taking place. Only on one occasion have we seen three together. Two grasping each other and one smaller specimen observing from a short distance. Possibly a spurned suitor.

After mating the female withdraws to her den and lays eggs, usually on the roof of the den. She usually dies while guarding the eggs. The eggs hatch and the young are planktonic for a period of time before becoming small versions of the adults. The males usually die shortly after mating.

When chased by a predator or when it decides it is threatened the Day Octopus can release ink into the water as it jets off. Usually the ink clouds the water and visually obscures the octopus to give it a head start. It is thought that the ink may also mask its scent. One day while swimming across the reef I startled a specimen and it jetted off and ejected its ink. To my surprise the ink solidified almost instantly and this can be seen in the image below.  This would probably confuse a predator. The solidified ink was approximately 20 cm across. 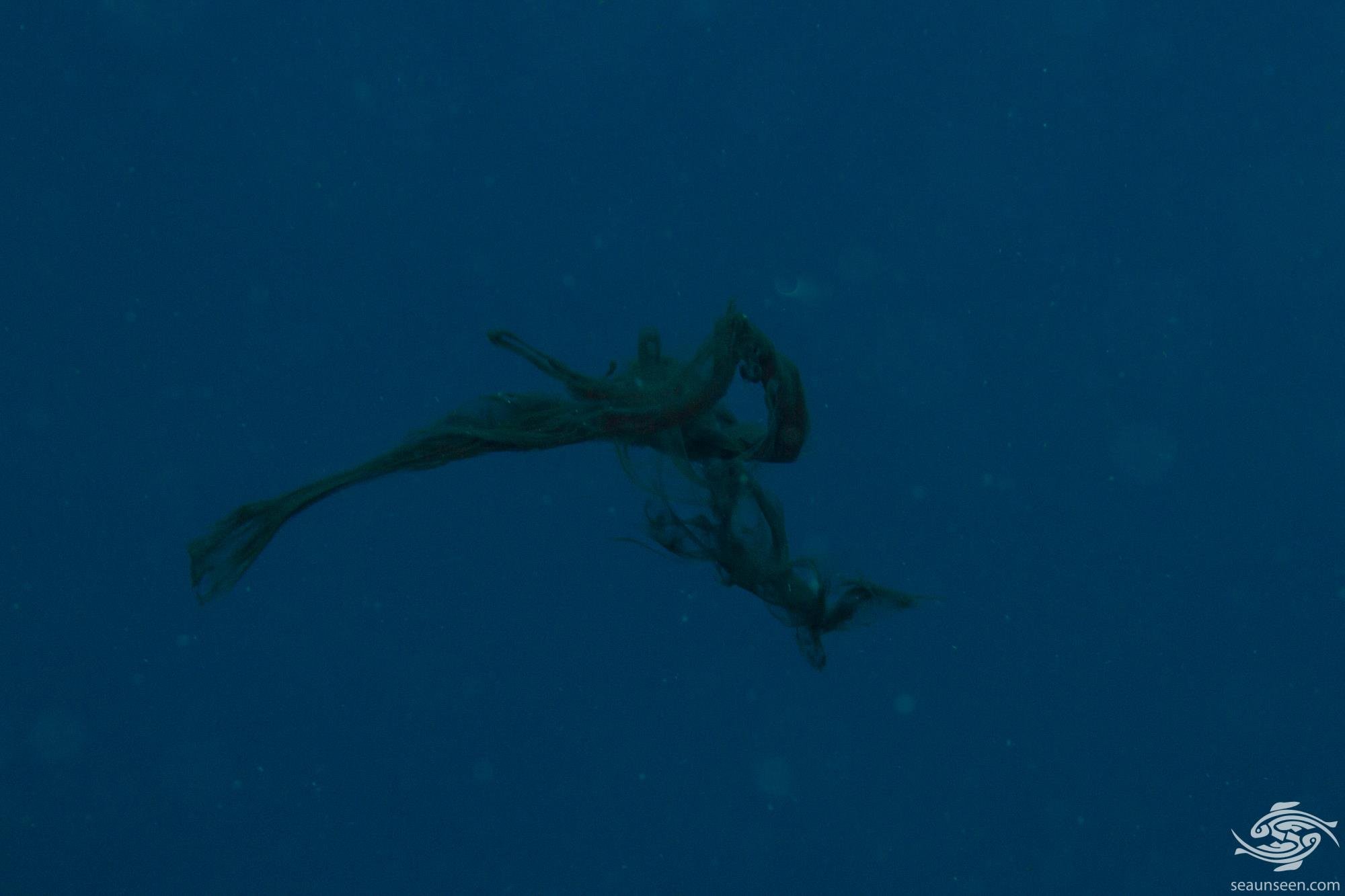 Day Octopus are an important commercial species in Tanzania both for subsistence fishermen and the international market. Tanzania has shallow sloping beaches and a relatively high tidal differential of up to 4.2 meters.

On spring low tides coastal villagers scour the shallows in large numbers searching for octopus and other edible seafood’s, both for local consumption and for sale. Both the size of the octopus and the numbers caught have dropped dramatically in the more heavily populated areas. Some NGO’s have been pushing the concept of octopus reserves and temporary closures of areas to allow the stocks to increase in size and number.

Throughout their range the day octopus is being heavily exploited by netting, trapping and jigging at night while using lights as an attractant. Only in the deeper waters in Tanzania does one see larger specimens such as those in these images. 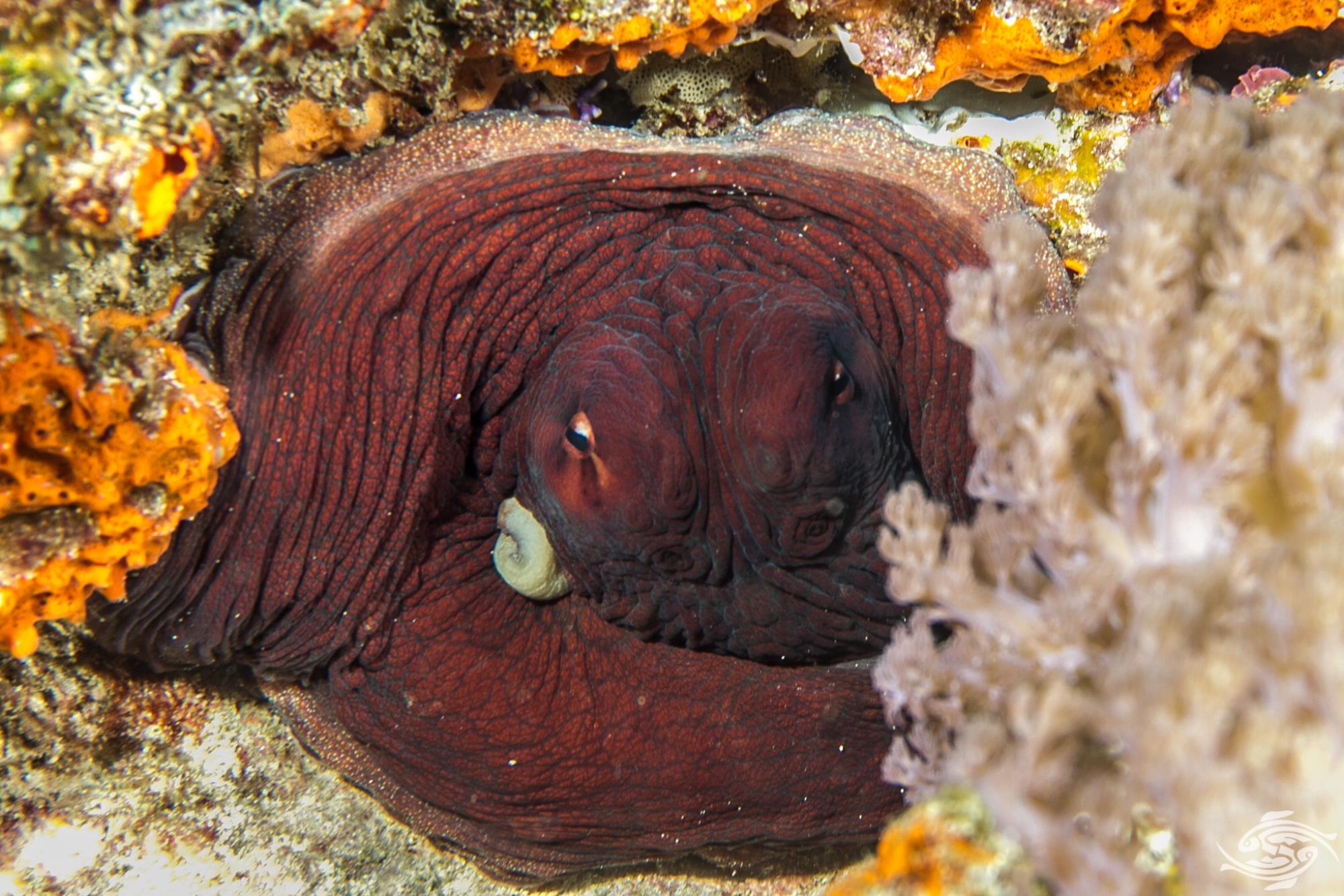 As a rule they are usually only kept in large public aquaria for research purposes. However some specialist aquarists keep them as individual pets in a tank on their own. They are escape artists being able to squeeze through narrow spaces and are adept at escaping from tanks. 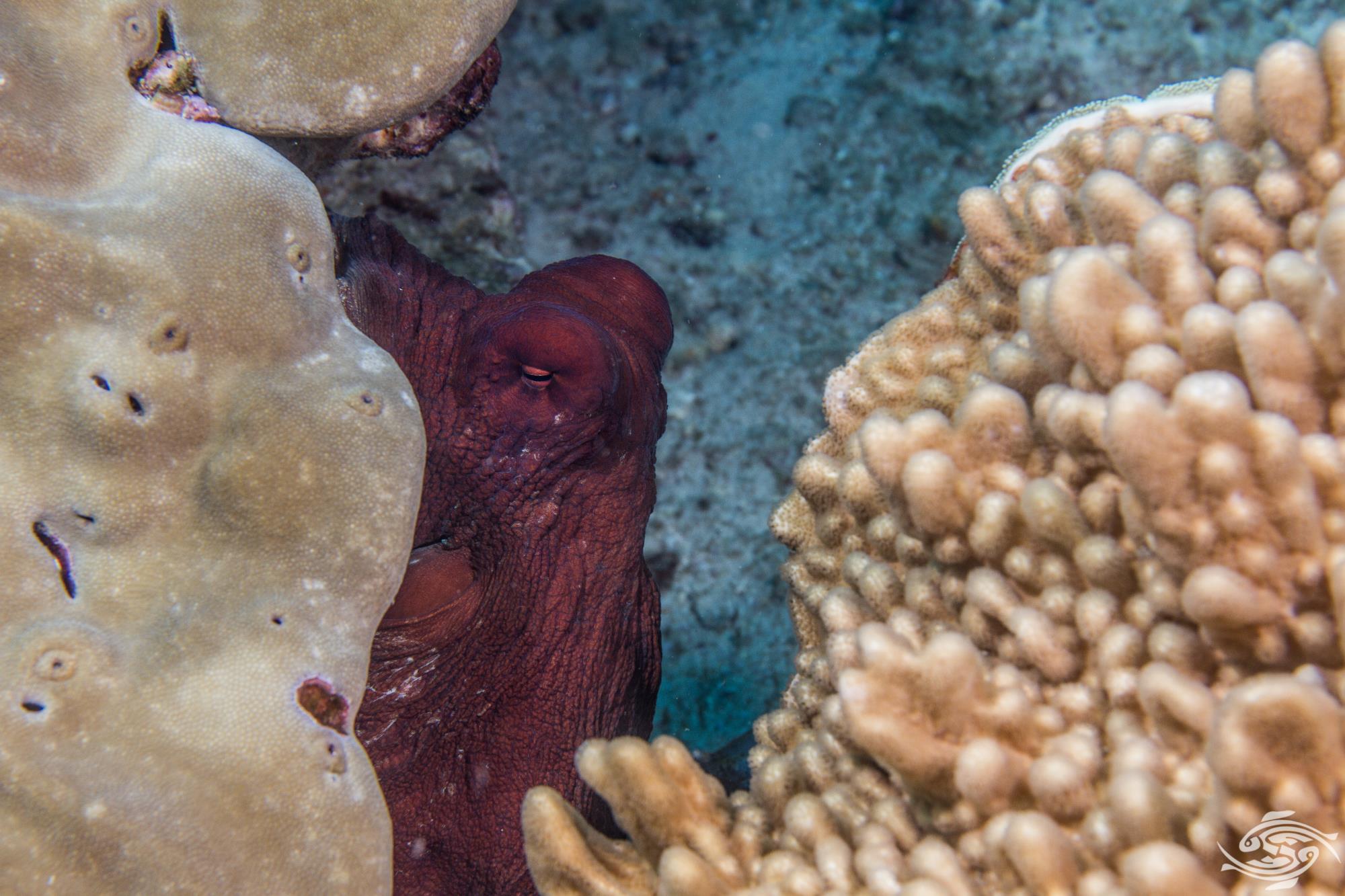 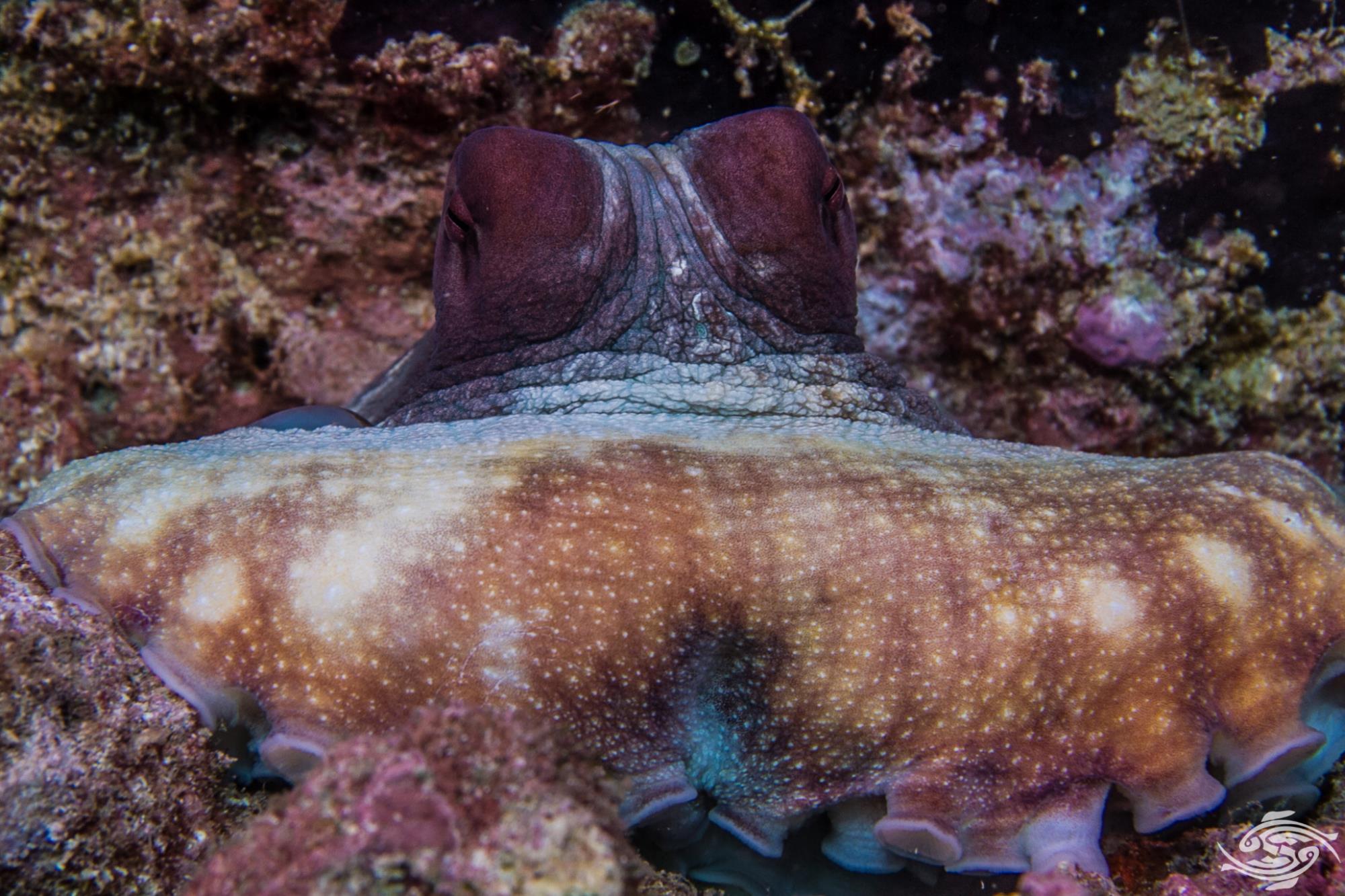