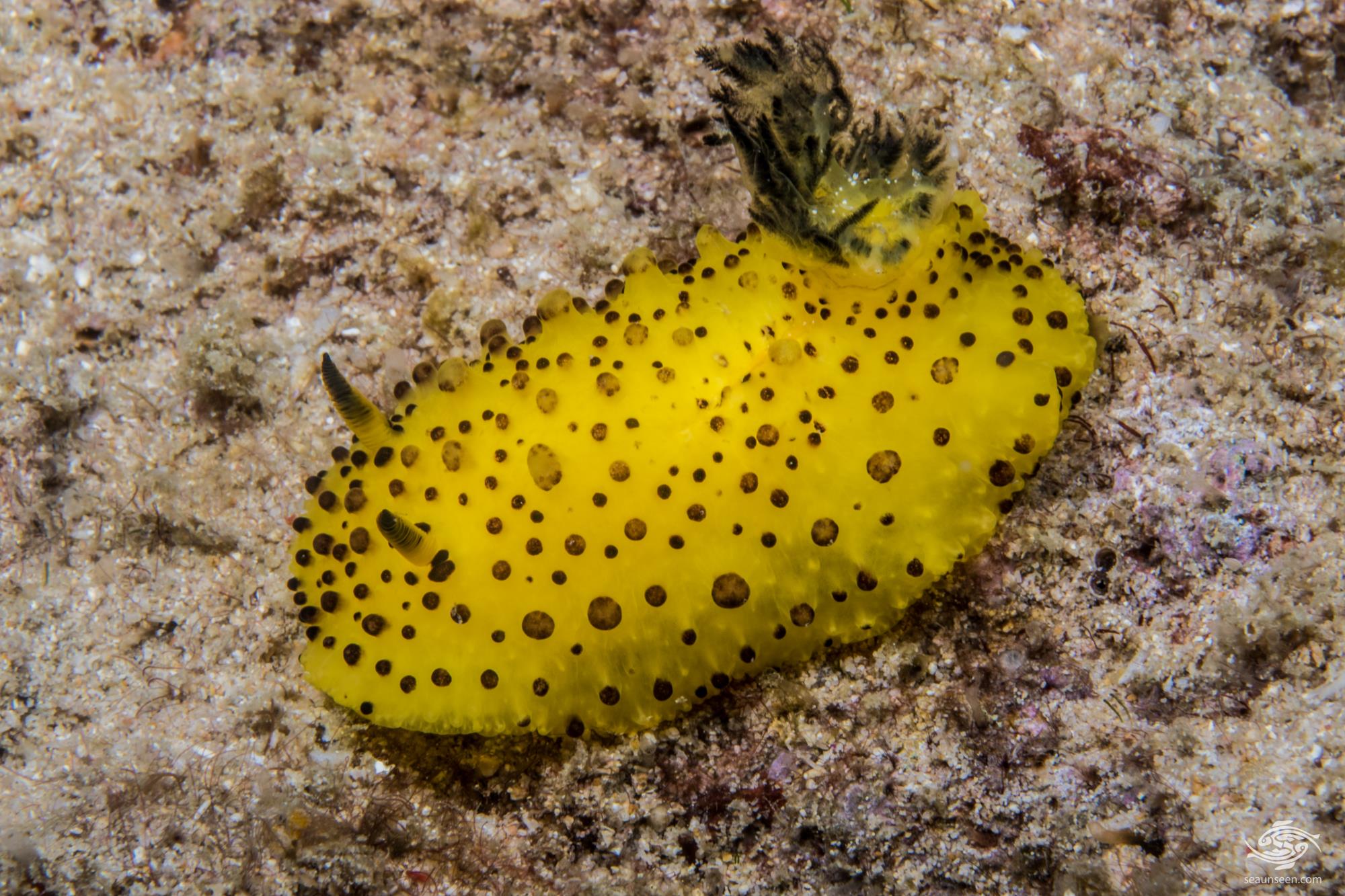 Doris ananas is a dorid nudibranch, a marine gastropod mollusk that is also known by its common name of the Pineapple Nudibranch .  They were only described in 2016 by Vas de Lima, Tibirica and Simone and the full description can be viewed here.

Thoughtfully those describing the nudibranch named it D. ananas which is the common name for pineapple up the East African coast and indeed in most other languages. There is a rather humorous explanation here on this point.  Because of its distinct resemblance to a pineapple , this has always been this particular nudibranchs common name.

Doris ananas have a yellow elongated oval shape with brown or black tubercles of different sizes spread across the body. The rhinophores are yellow and tipped with black and brown and the gills are black on all the specimens we have seen. They grow up to at least 5 centimeters in length but possibly slightly larger. 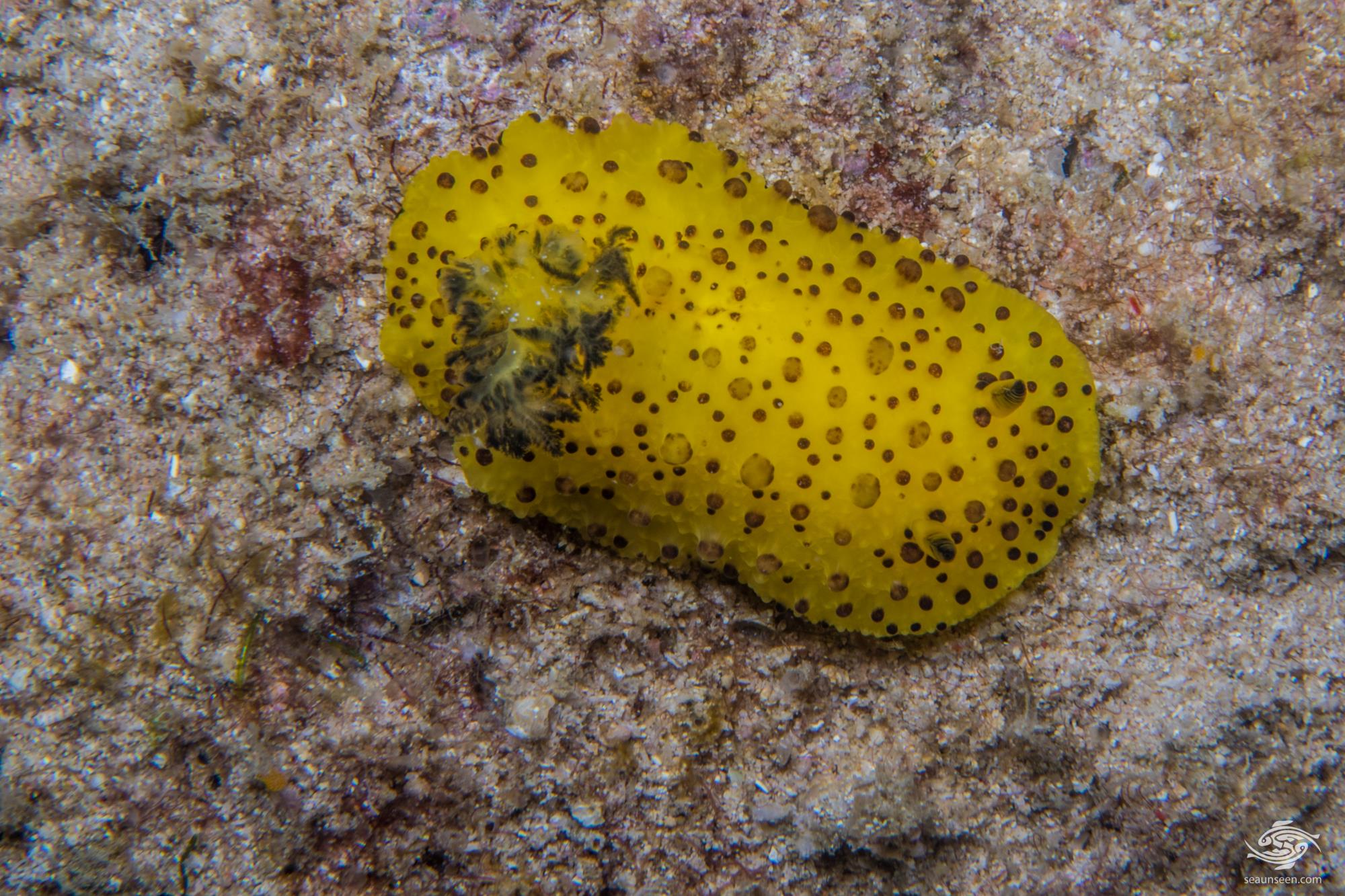 DORIS ANANAS IN THE WILD

Doris ananas are not that common  in Tanzanian mainland waters, but when one sees one, one will generally see a few more for a few weeks and then not see any for quite some time. In Dar es Salaam we tend to see them from February to March and then only on one seaward unprotected reef ( Kankadya  Patches) in depths between 12 to 18 meters. This reef is mixed coral and sand.  In Mozambique they are reportedly more common in winter months ( June) . 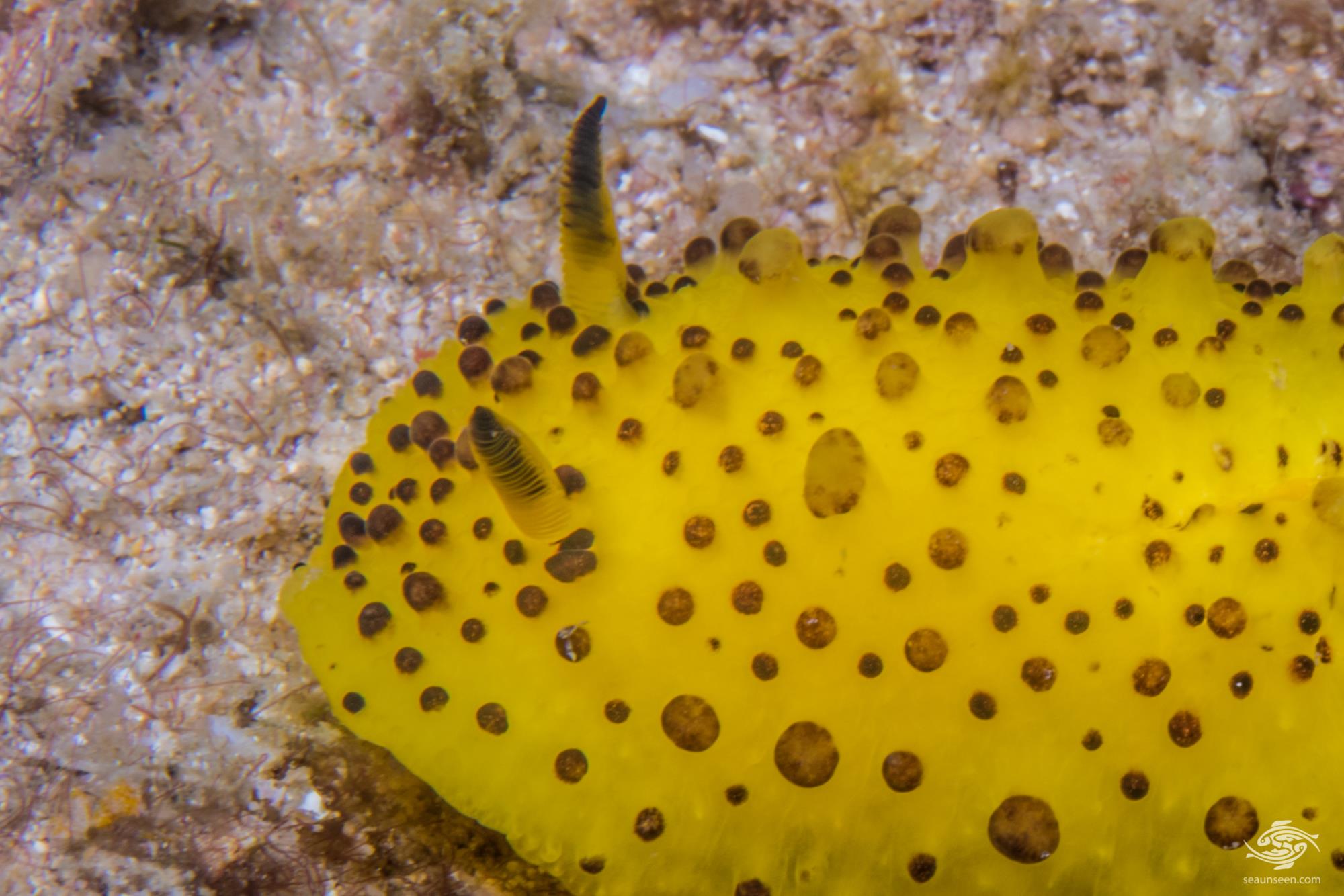 Doris ananas are found across the west Indian ocean from Kenya down to South Africa and are reported in Madagascar, Seychelles and Mayotte and possible records in Indonesia, Queensland and the Marshall Islands. 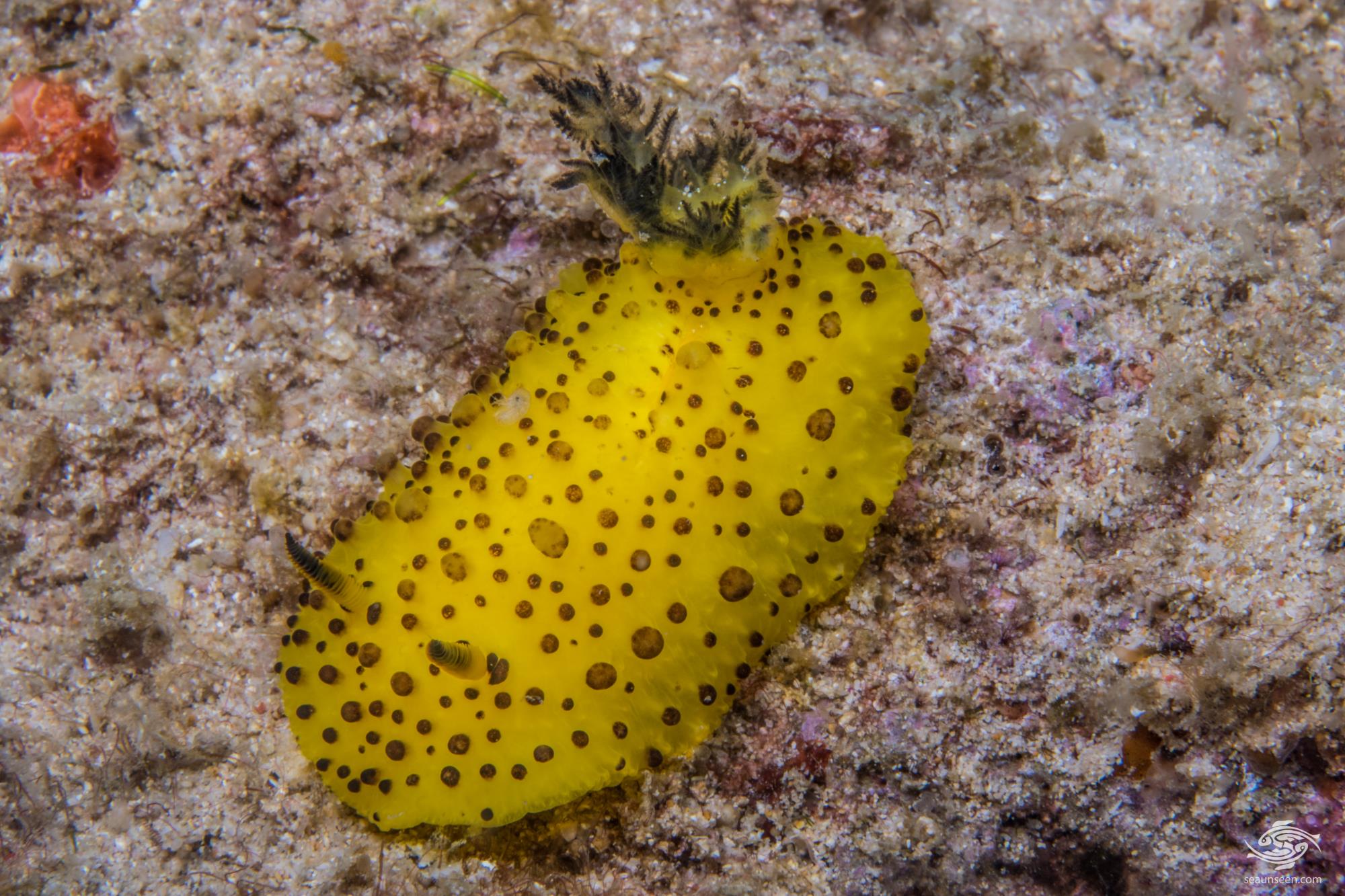 Doris ananas feed mainly on certain species of yellow sponges. The chemicals synthesized by bacteria in the nudibranch from these sponges provide them with chemical protection against predators. 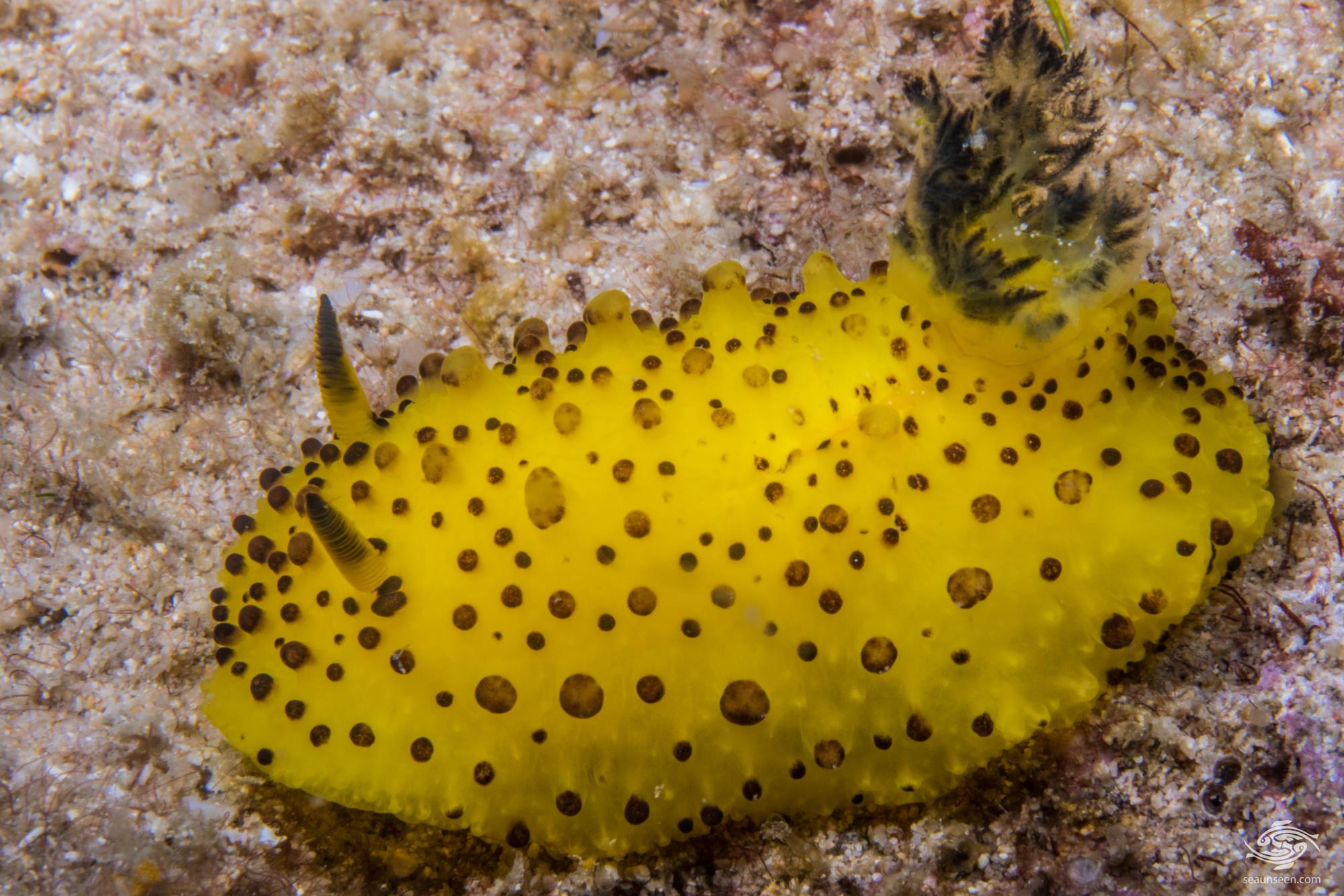 Doris ananas are simultaneous hermaphrodites and mating takes place by connecting the sexual organs which are on the right hand side of the body. Two specimens manouvre right side on and extend their organs towards each other. Once the two organs hook up sperm is transferred across to each specimen. Eggs are laid on a solid substrate in a gelatinous egg ribbon and when they hatch the larvae or  veligers as they are known become planktonic before growing into adults.

Interestingly they have spikes in their vaginal passages the purpose of which are to date unknown. 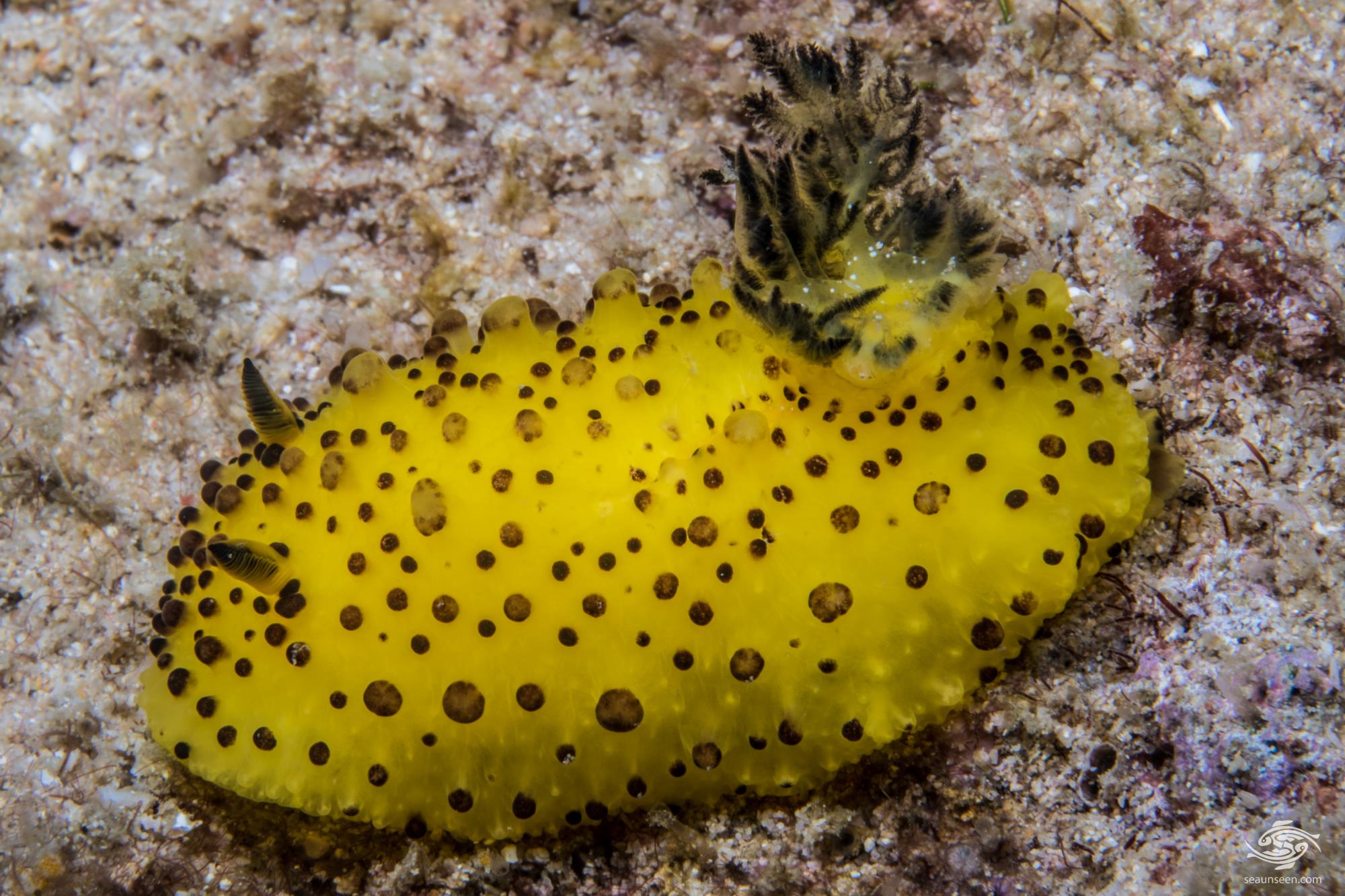