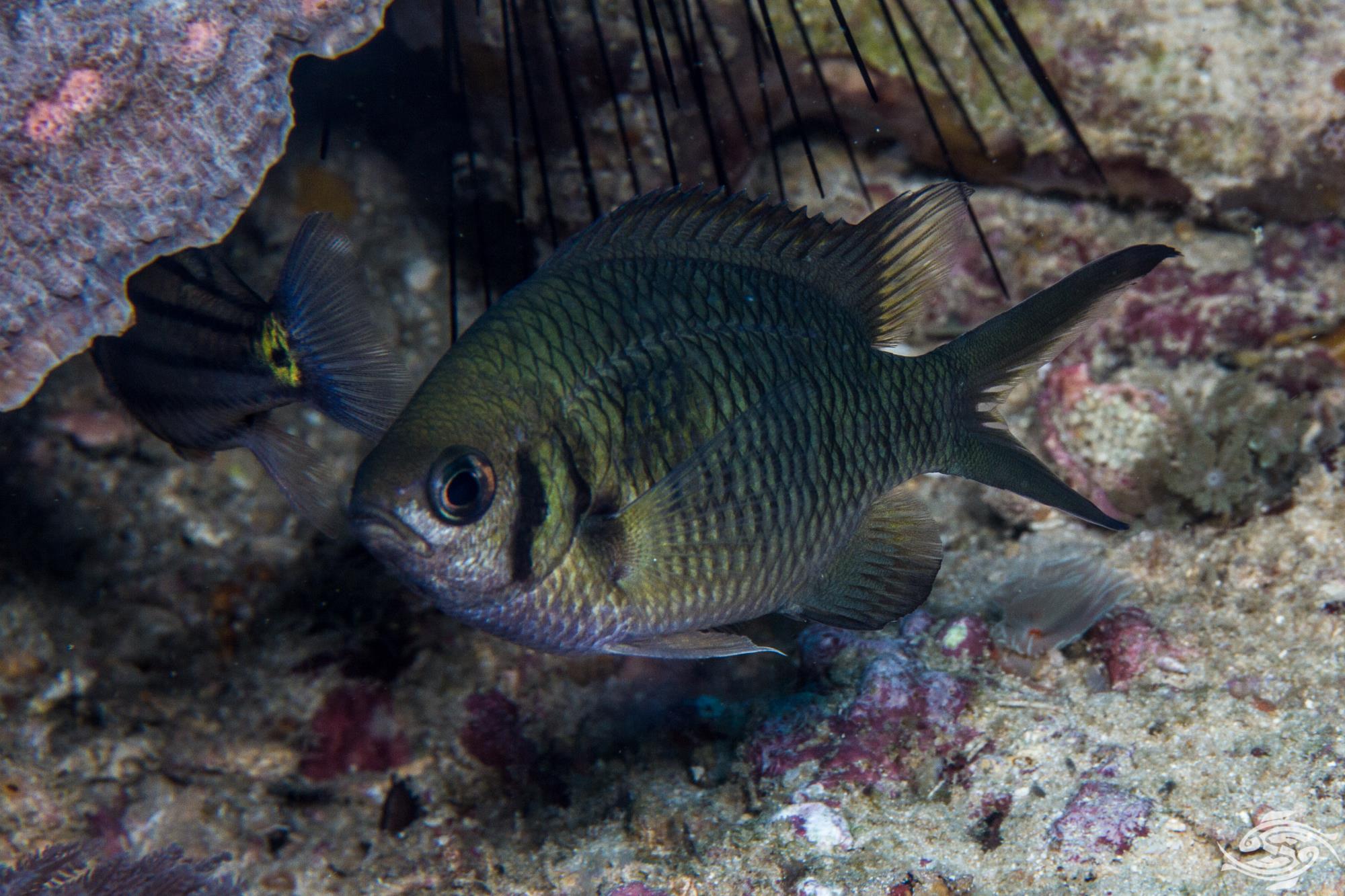 The Double Bar Chromis ( Chromis opercularis) is also known as the Double Bar Lightning Chromis , the latter name refering to its juvenile stage when it is brightly coloured. This stage can be seen in the image below. 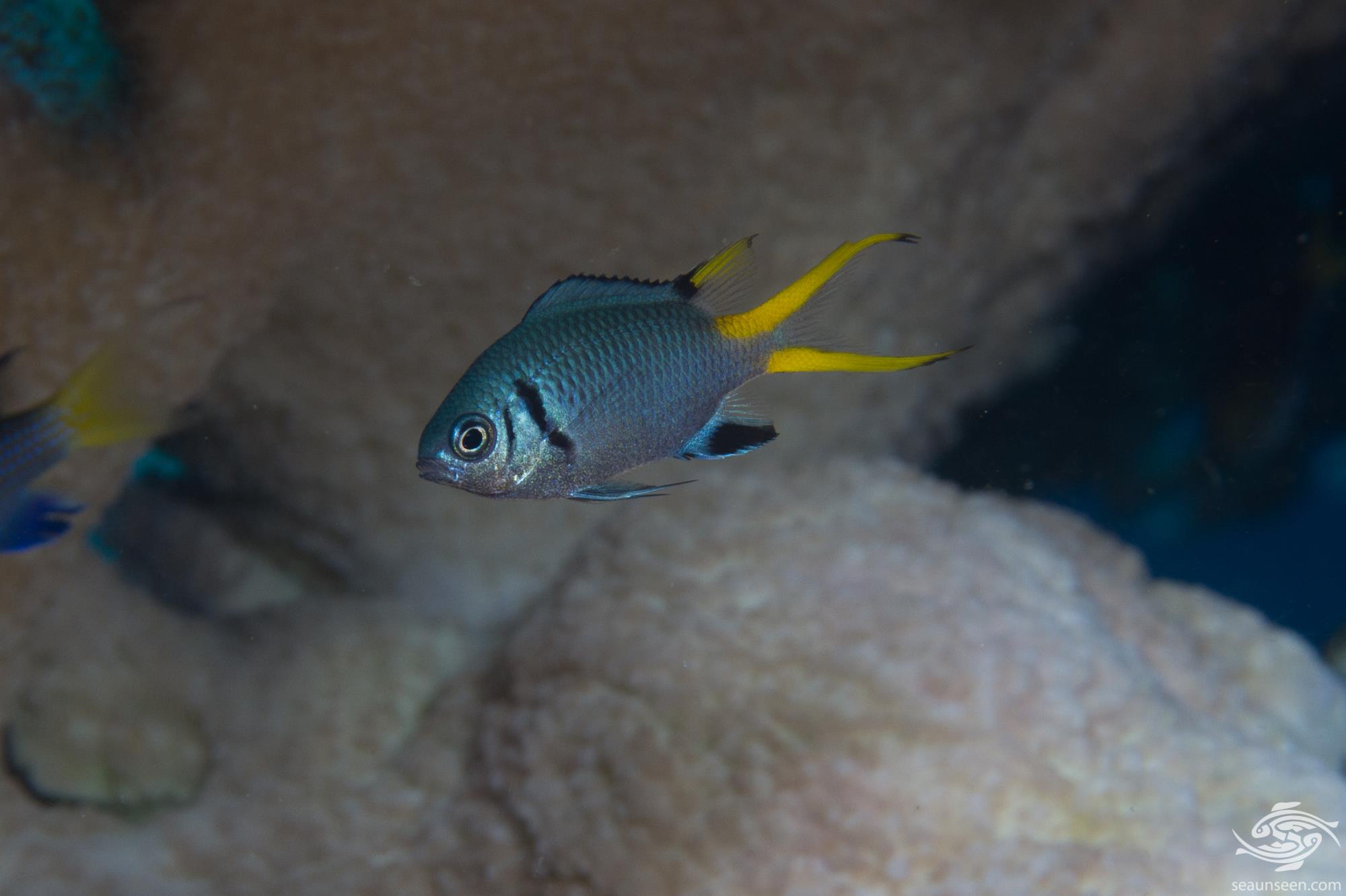 The body of Double Bar Chromis has an elongated oval shape with a pointed nose and a forked caudal fin. Behind the eye there is a thin black bar and a thicker dark bar further back on the body extending down onto the base of the pectoral fin. In the juveniles the body is silver tinted with blue and depending on the angle one views them from the blue tint may be more predominant. On the young juveniles the tail lobes are long and yellow making them an attractive looking fish. As they age so the body becomes more of a darker silver brown colour.  The adults grow up to 16cm in length making them one of the larger members of the Chromis genus.

They closely resemble the Dark Bar Chromis (Chromis weberi), but weberi only have a single thin line behind the eye and the juveniles are not as colorful. Additionally the Dar Bar Chromis has a bar through the eye which is the easiest way to differentiate between the species. 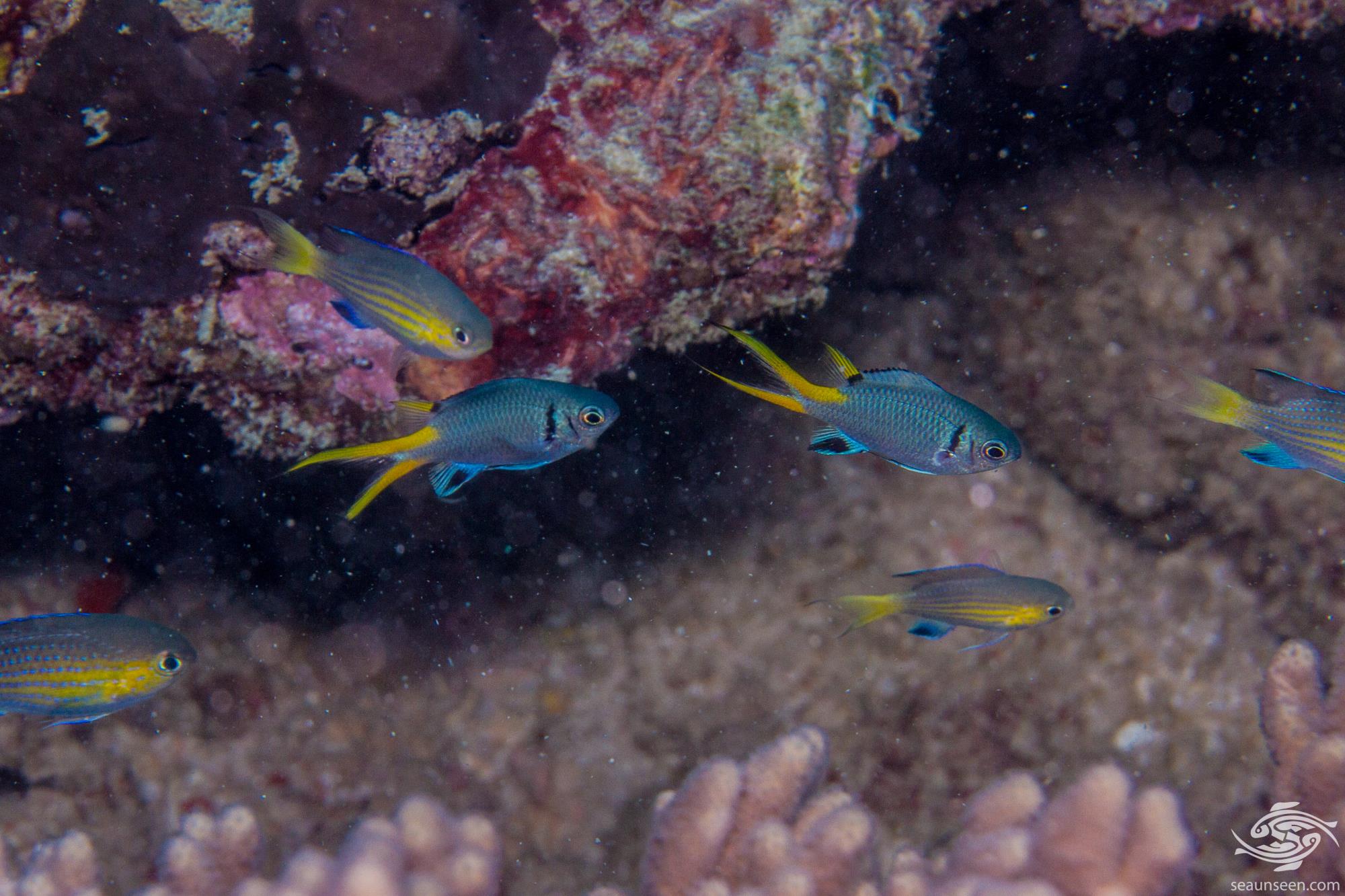 DOUBLE BAR CHROMIS IN THE WILD

Double Bar Chromis are very common on Tanzanian reefs. The juveniles are usually found around a raised bommie, coral feature or rock with good hiding places. They swim around their hiding spot, darting upwards to catch zooplankton.  When a diver approaches the entire shoal moves into cover and quickly emerges once one backs away a bit. The adults which grow up to 16 cm are often seen in small groups on the reef top, but sometimes they are seen singularly. 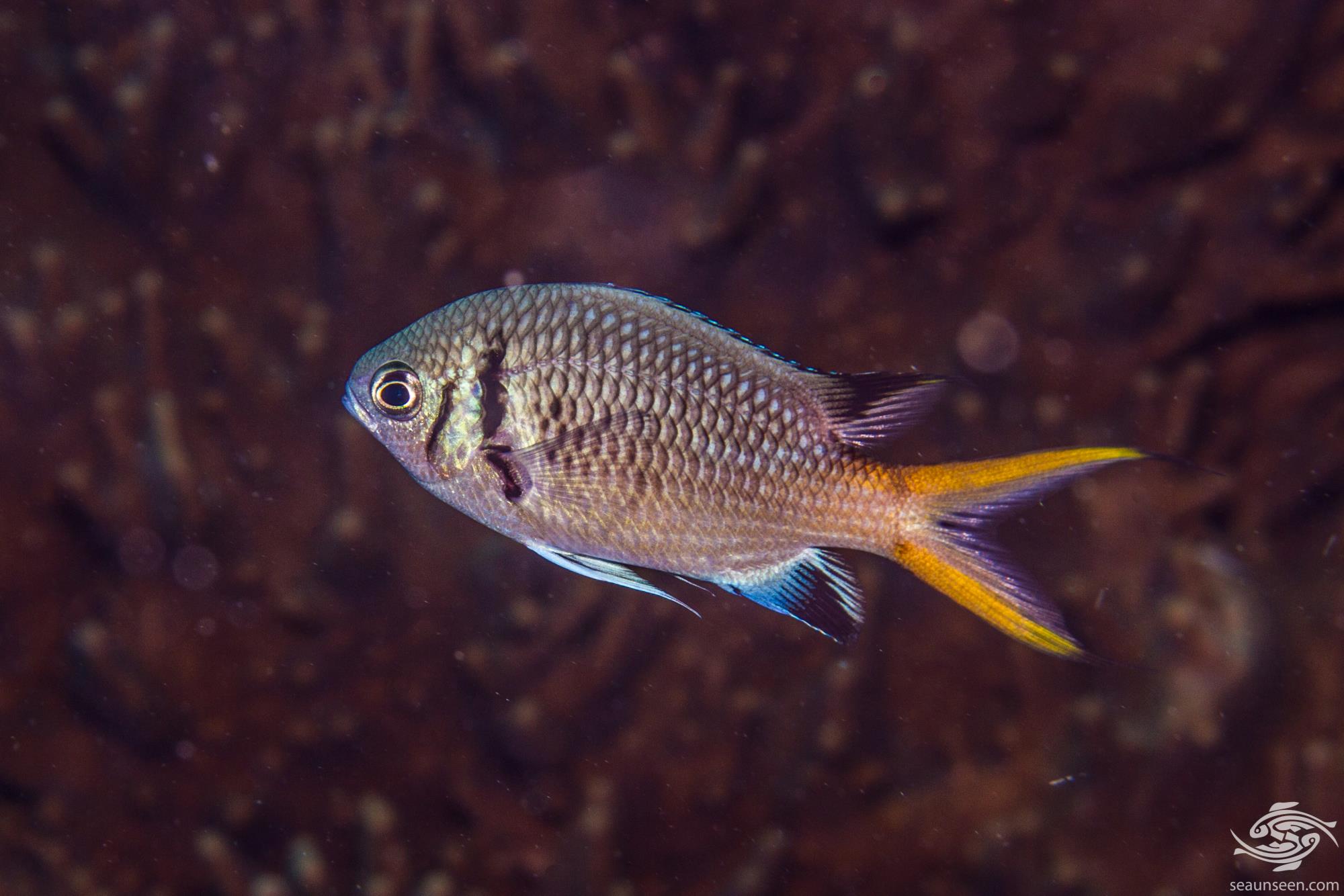 The Double Bar Chromis is found across the Indian ocean from East Africa down to South Africa across to Australia, where they are reportedly rare and only found on Christmas Island. They are also found  in  Vanuatu in the Western Pacific. 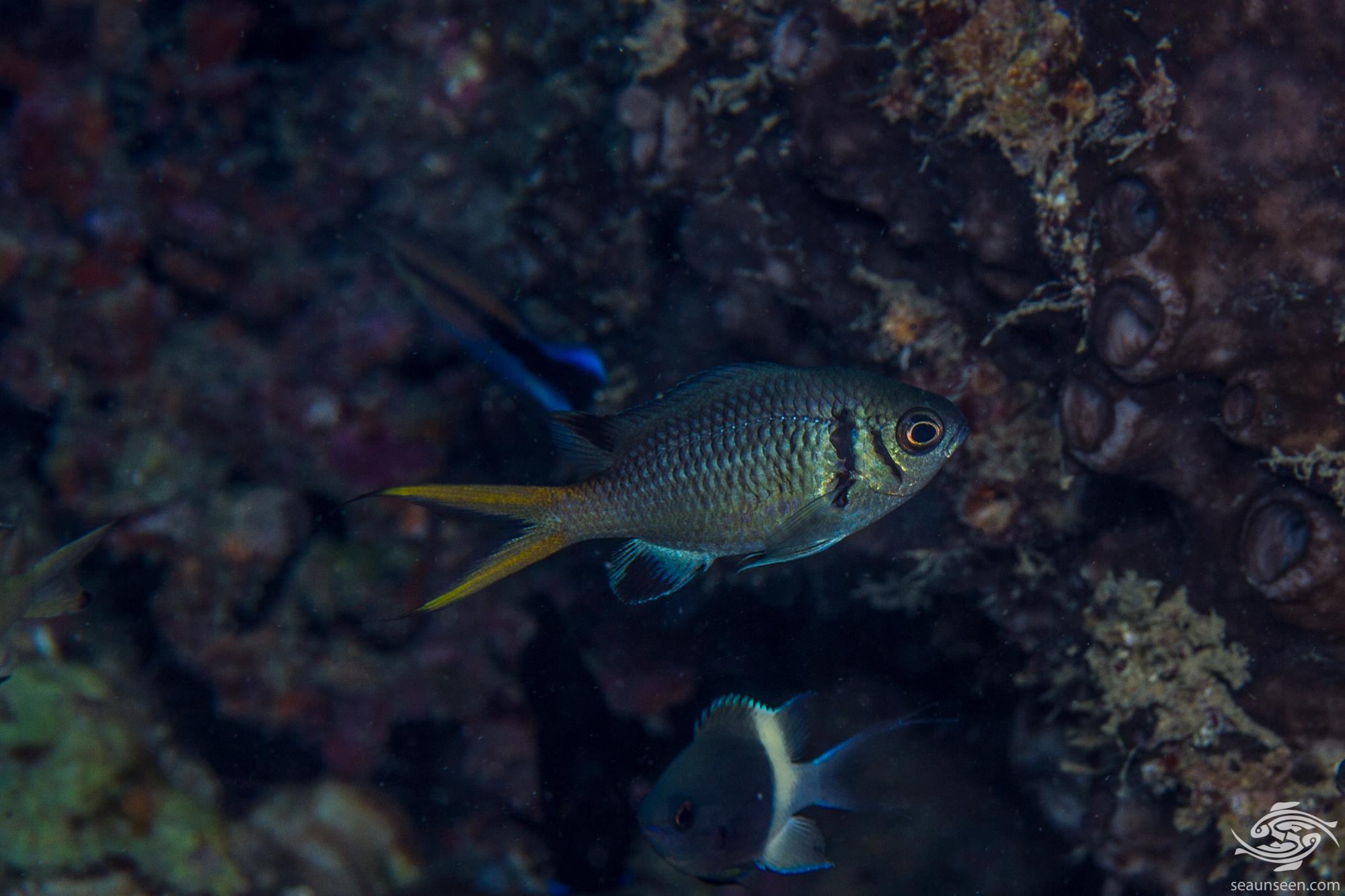 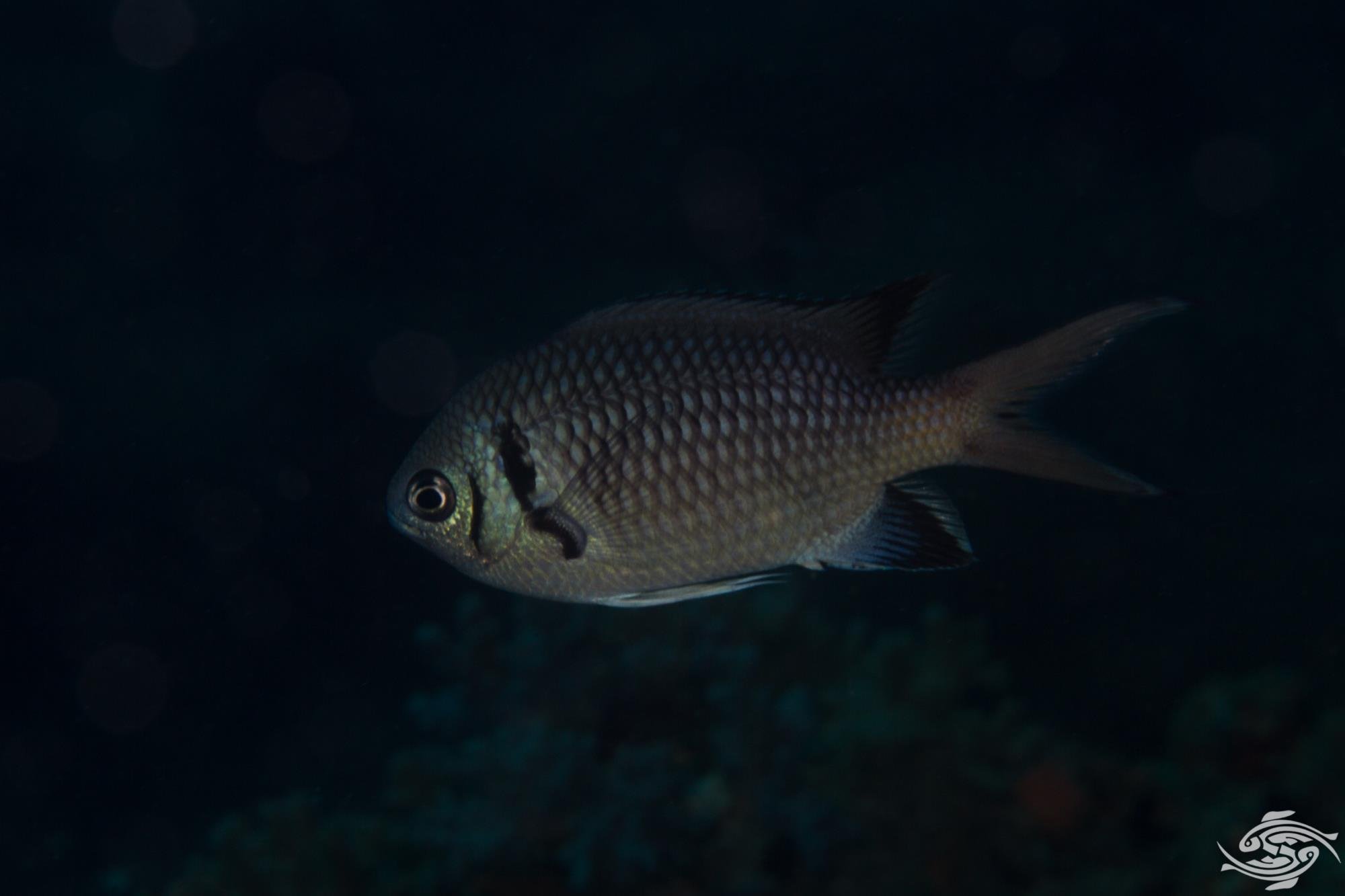 Little if any research has been done on their mating habits, but they probably follow the normal Damselfish behavior. Pairing before mating is usual and after the male cleans a patch for the eggs, mating takes place. The eggs of Double Bar Chromis are demersal and adhere to the substrate. The males guard and aerate the eggs until they hatch. 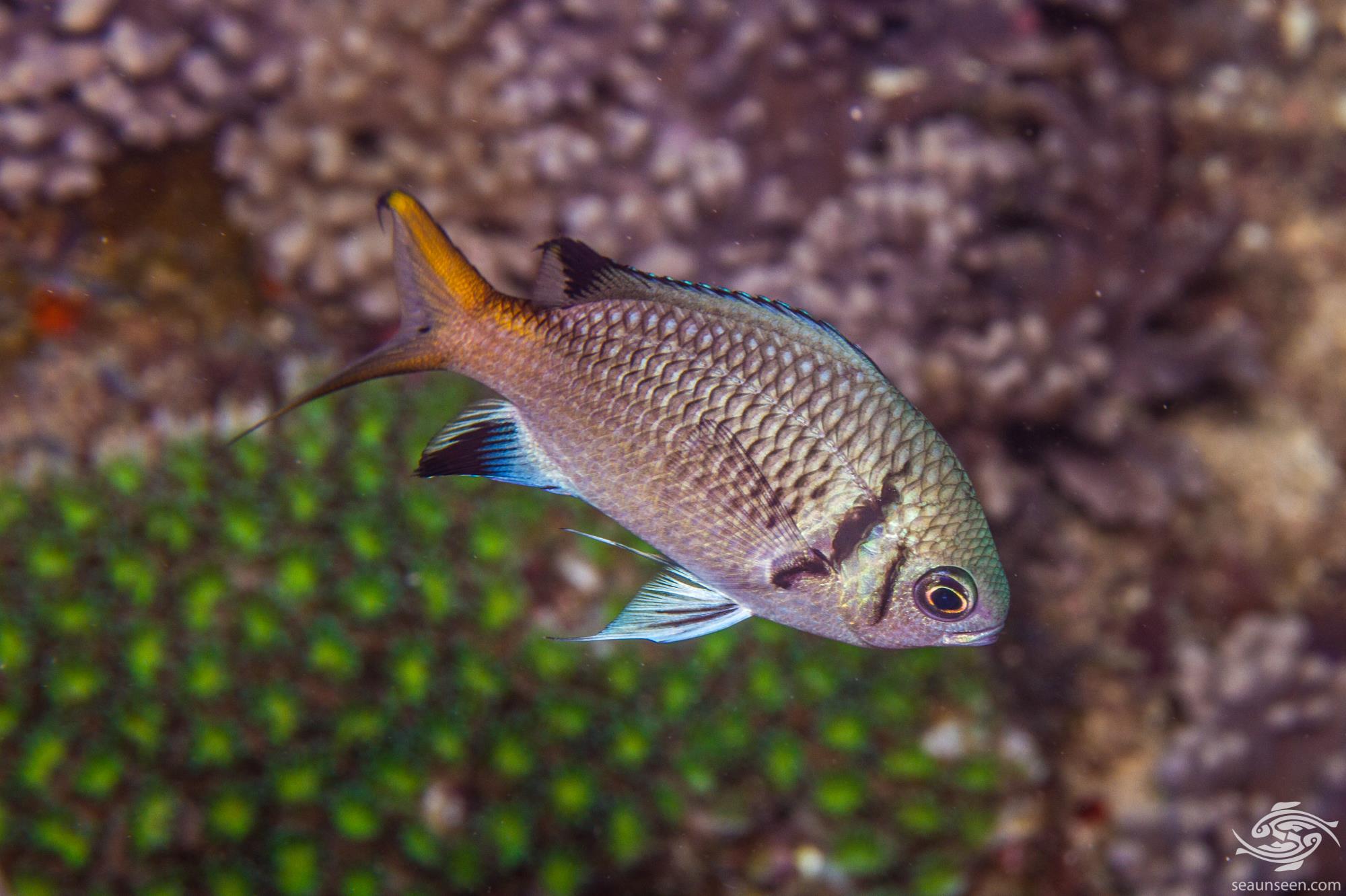 Double Bar Chromis are hardy fish and are easy to keep in an aquarium. However given that they lose their attractivness when they age and the fsct that they grow up to 16cm, one has to have a large tank to cater for this size. They will undoubtedly become highly territorial as adults. It is almost a certainty that they will harass and beat up more peaceful fish.
SEE OUR OTHER POSTS ON DAMSELFISH