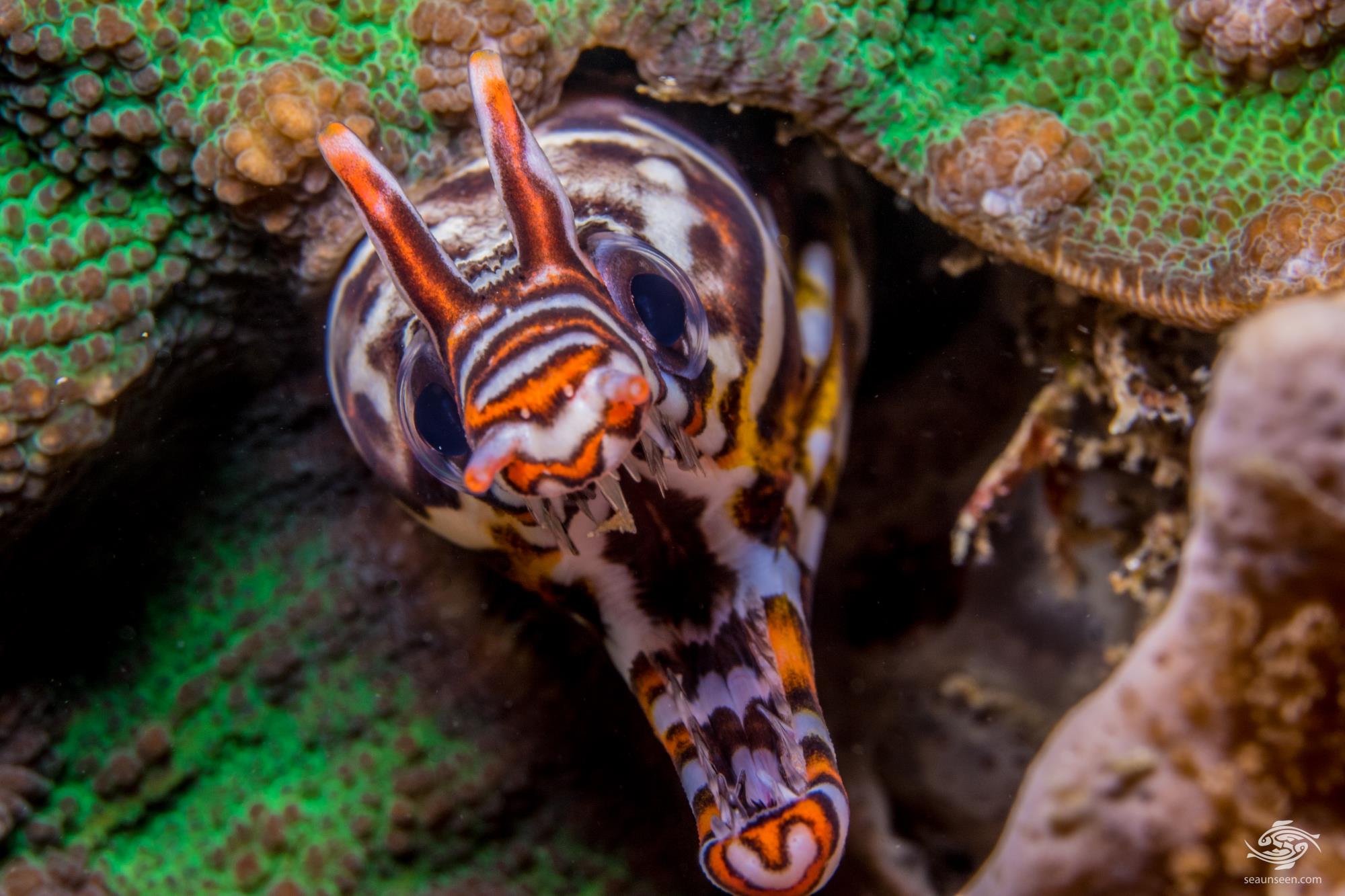 The Dragon Moray Eel, Enchelycore pardalis is also known as the Dragon Eel and the Leopard Moray Eel.  The reference to Leopard comes from their scientific name, with paradalis meaning leopard in Greek. They are very rarely seen in Tanzanian waters perhaps both because they are rare and because they are one of the more reclusive eels around.

The Dragon Moray Eel grows up to 80 cm in length and has a serpentine shaped body which has quite variable coloring. The body may be either white , yellow, orange or dark brown but is usually a brown color spotted with the other colors and they have a large number of spots across the body.

Moray eels have two sets of nostrils, the anterior nostrils on the end of the nose and the posterior nostrils near the eyes. On the Dragon Moray both sets are elongated with the posterior being particularly long and thick. The mouth which cannot close completely has a row of long thin backwards curving teeth on each jaw with a further row down the center of the upper palate. The teeth in the upper jaw are longer than those in the lower jaw.

The inside of the mouth is colored in much the same fashion at the face which has a mixture of white , yellow , brown or orange markings on it. Each specimen seems to have its own unique set of marks on it. 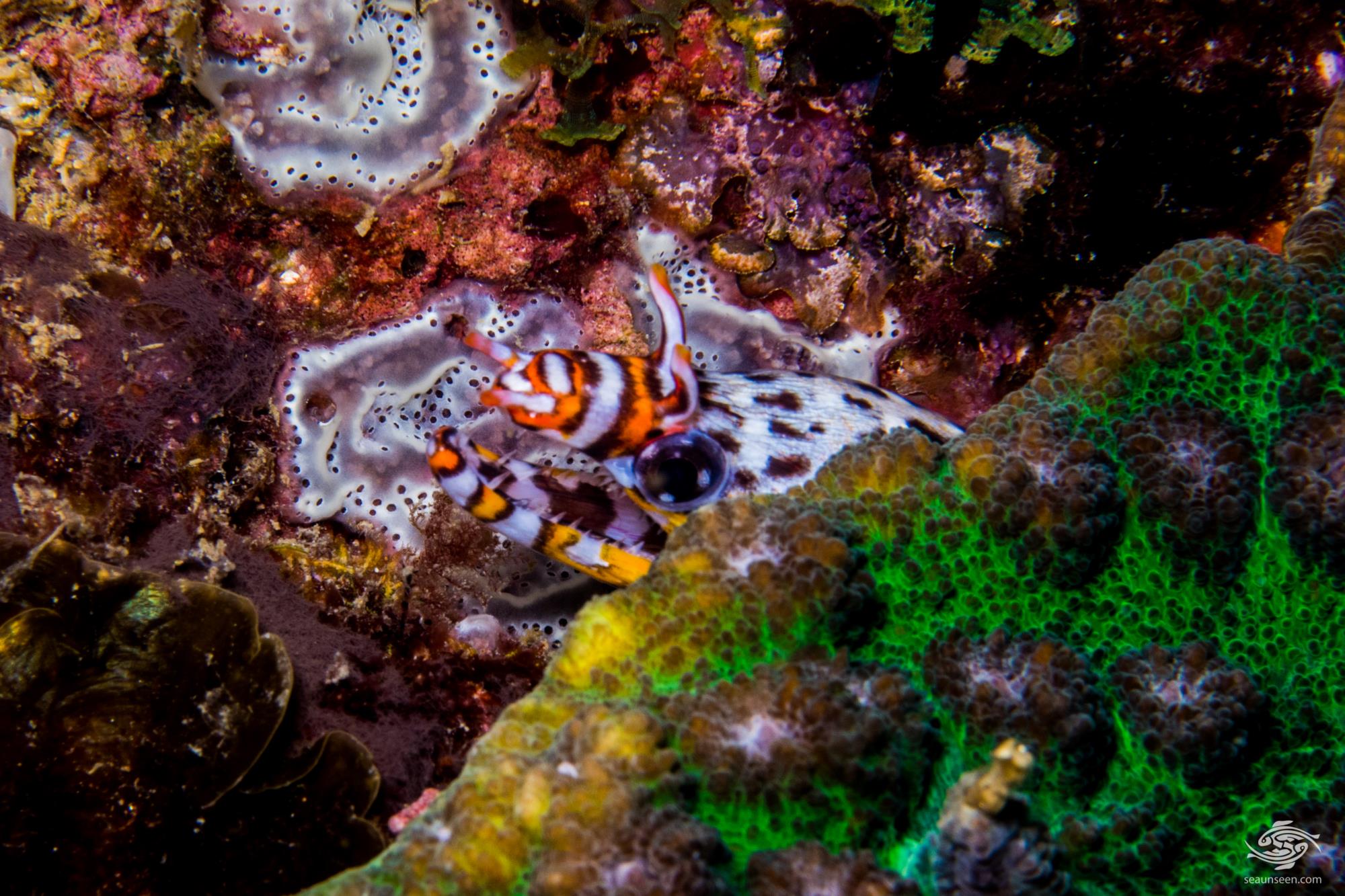 Dragon Moray Eel are usually nocturnal feeders and spend the days in crevices in the rocks.  They are not common and are rarely seen. When they are seen they are usually on a large feature with good hiding places. More often than not there are large numbers of cardinalfish and sweepers in the vicinity. 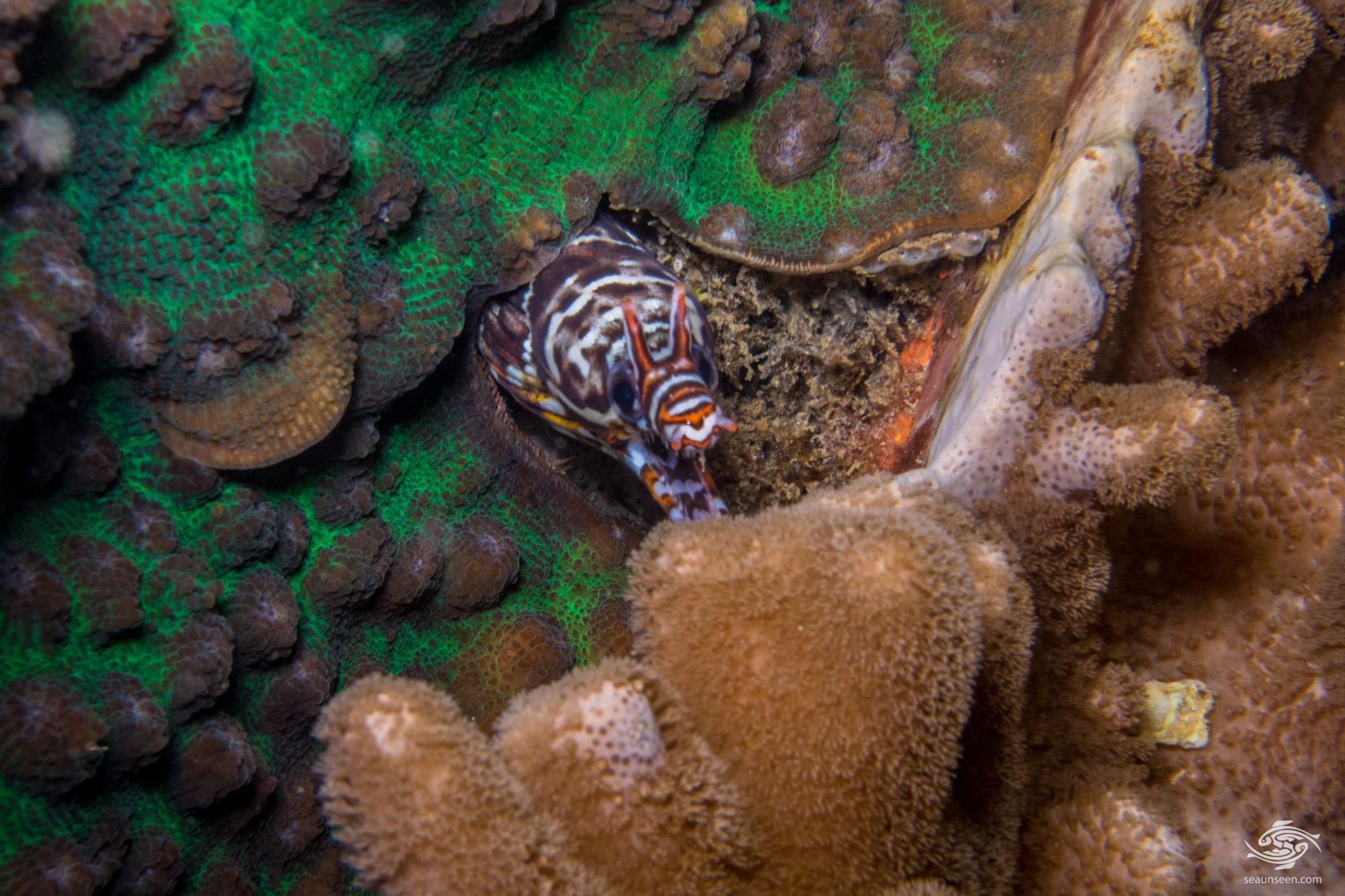 Morays secrete mucus over their scaleless skin, which in some species contains toxins. They have a thick skin and a large number of cells that secrete mucus. 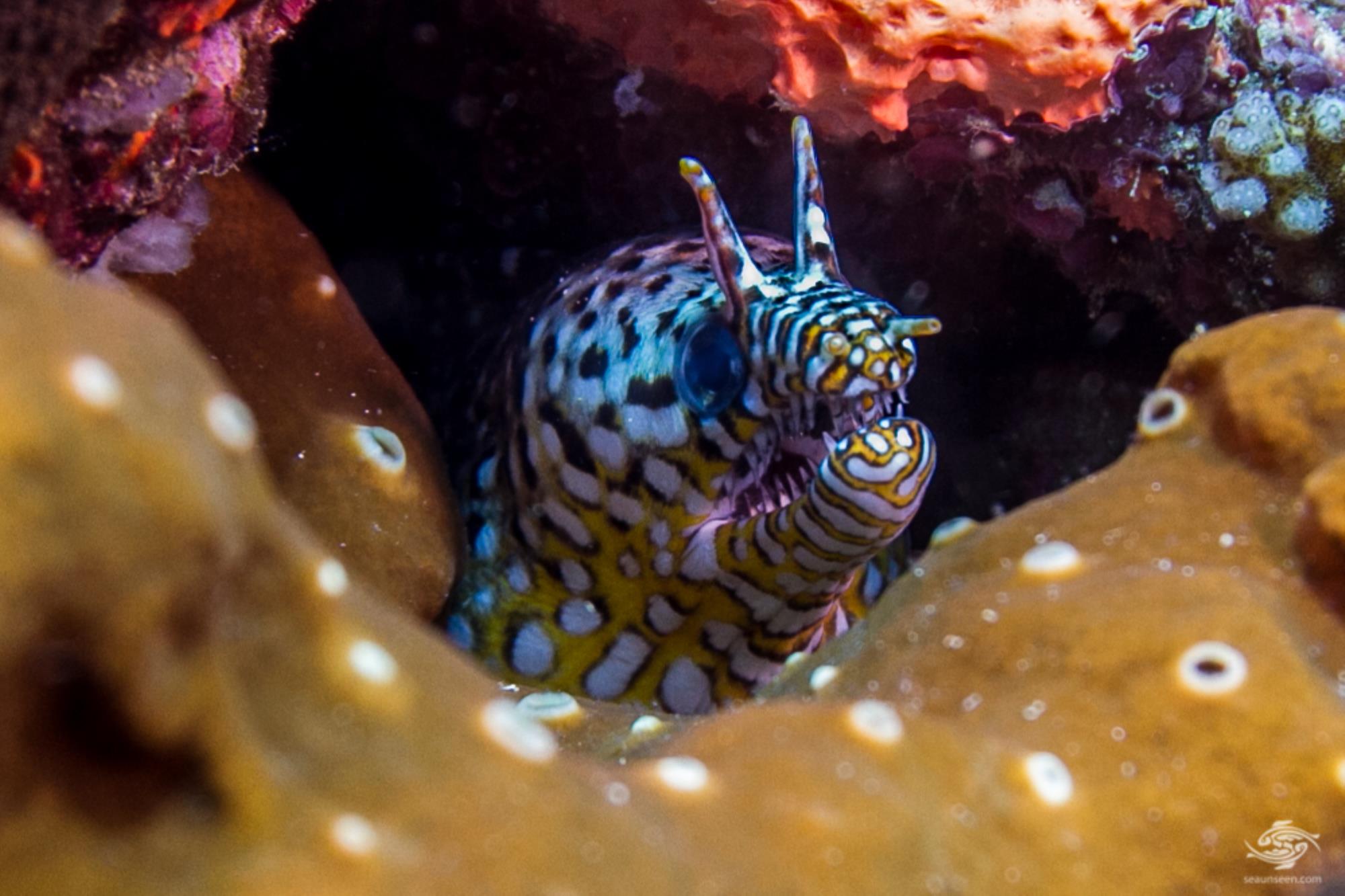 The Dragon Moray Eel is widespread across the Indo-Pacific area, being found from the East Coast of  Africa from south of Durban northwards, Red Sea included, across to the Pitcairn group, Hawaiian islands and  Polynesia. North to  Japan and south to New Caledonia, Fiji and Australia.
They are found in rocky reefs, coral reefs and occasionally in lagoons provided there is shelter. They are found from depths of 1 to 60 meters but we have always only seen them between 12 to 14 meters on seaward reef and always on a large feature. 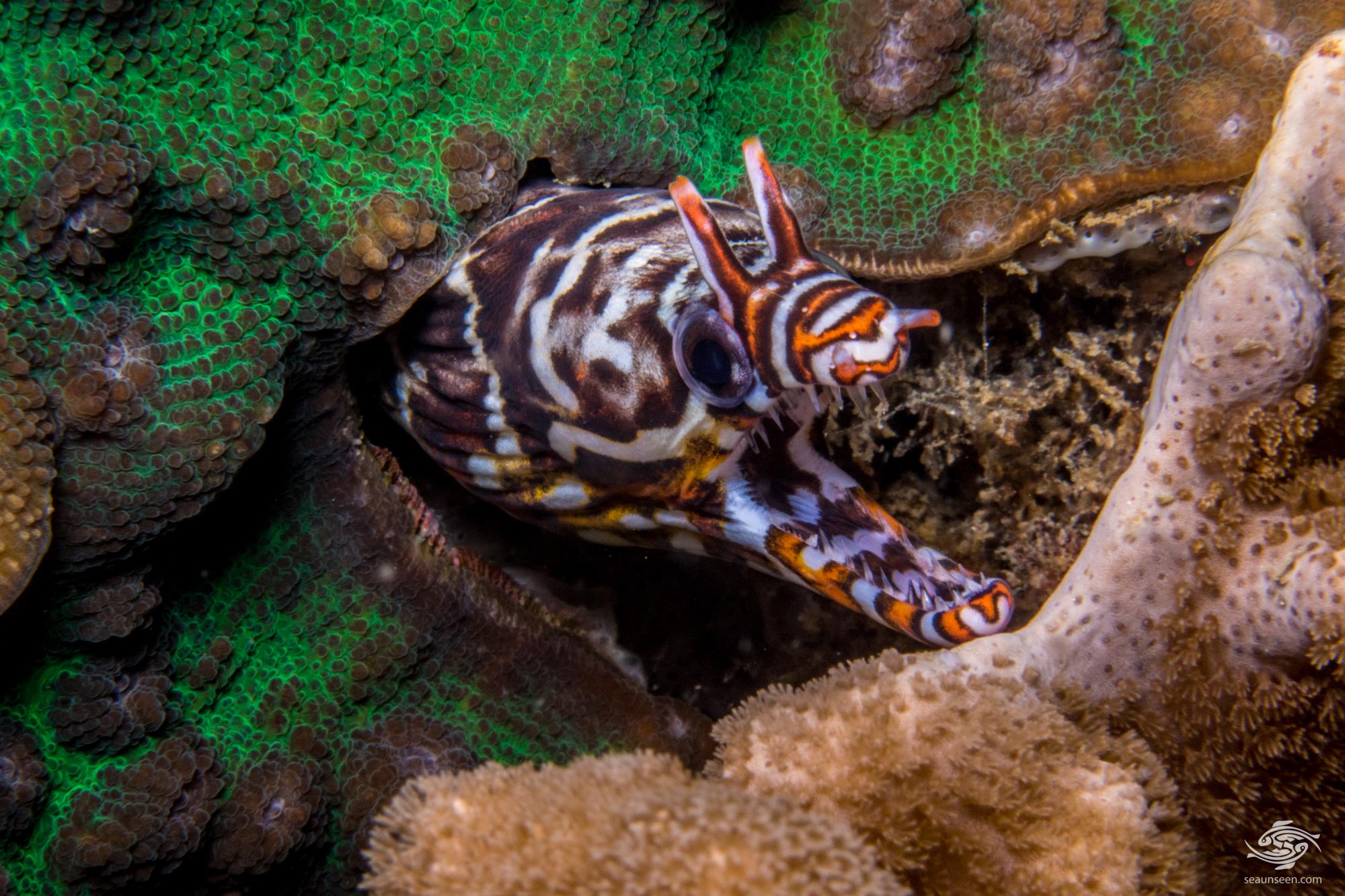 The Dragon Moray Eel is carnivorous, and does most of its hunting at night.  They feed mainly on small fish and crustaceans. Moray Eels have relatively poor eye sight but they have an excellent sense of smell that they use to detect their prey. They are known to knot their body when dealing with larger prey to gain leverage. 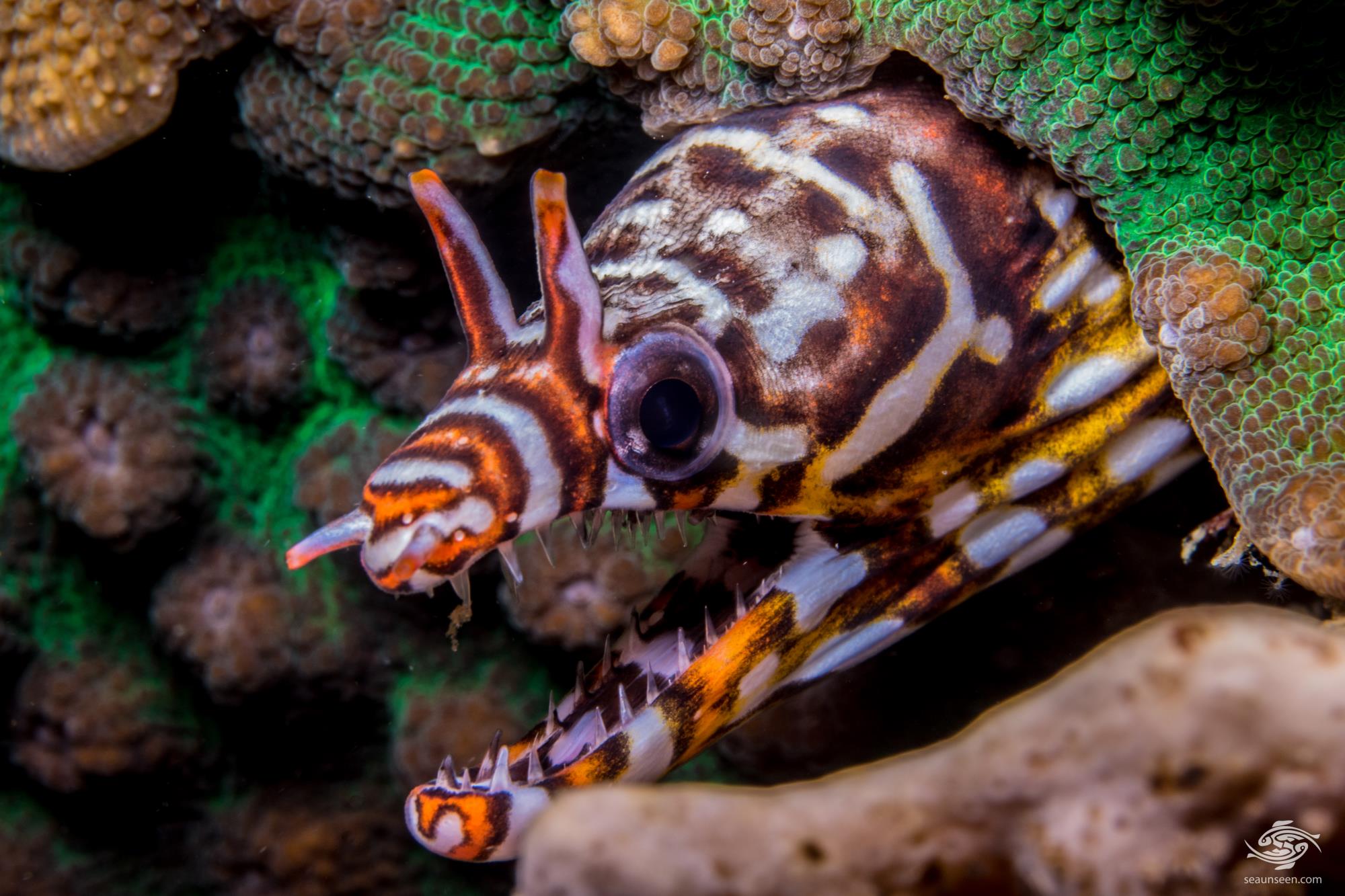 Dragon Moray eels are kept in aquariums and are collected in many areas for sale in the aquarium trade. Demand outstrips supply and in many areas they are increasingly rare. A mated pair can sell for as much as USD 6000. 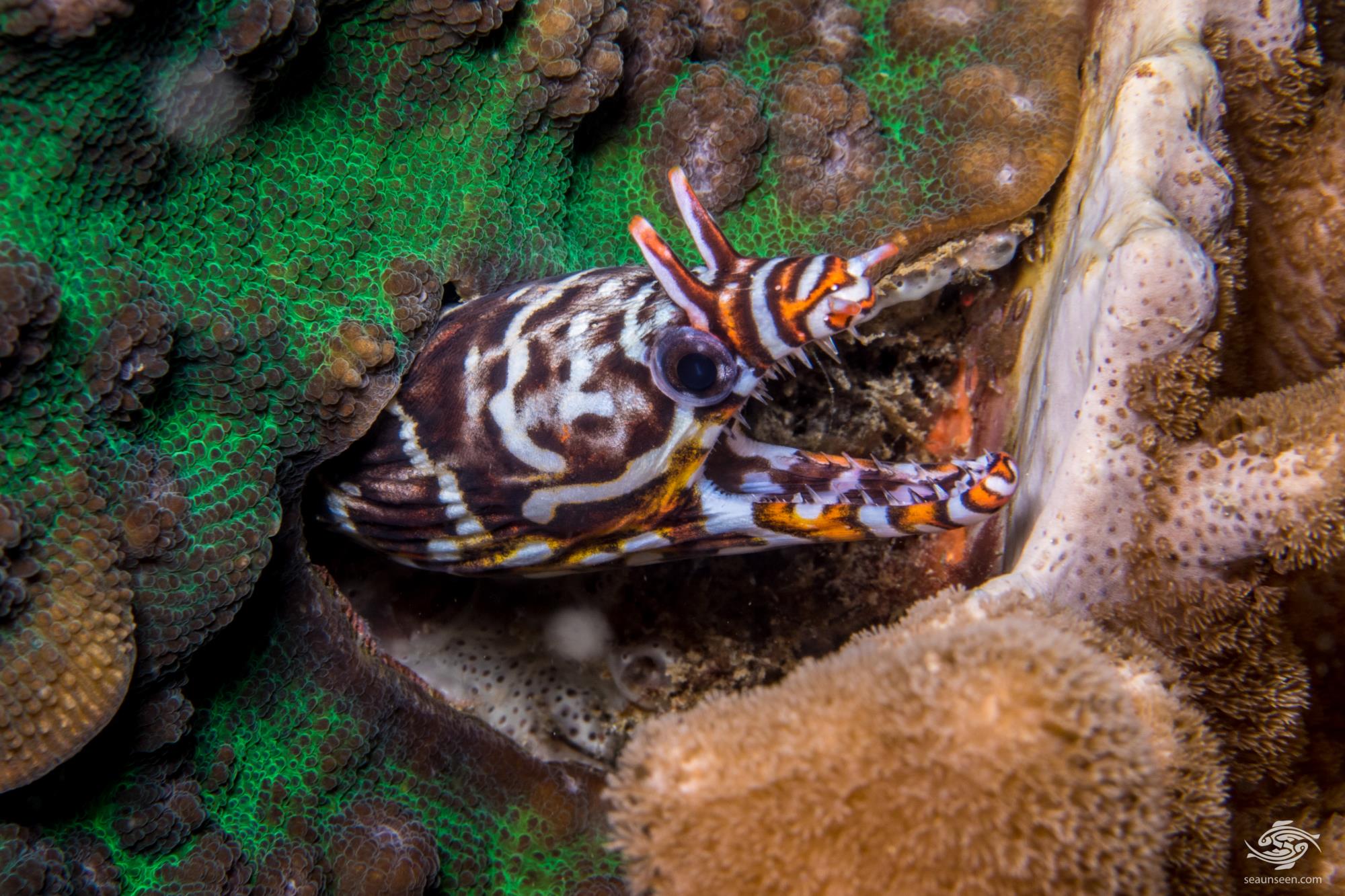 The Dragon Moray Eel, being attractive looking and relatively small and more peaceful than the other larger species of Moray Eel are highly sought after by aquarists. They are said to be relatively easy to keep with most specimens switching to feeding in an aquarium. A  good filtration system is recommended.

Being carnivores they will take smaller fish and tank mates should be larger. Being eels they will certainly try and leave their tank and the top should be very well secured to prevent this. Many aquarists have come home to find their prized specimen dried out on the floor and it is best to avoid this.