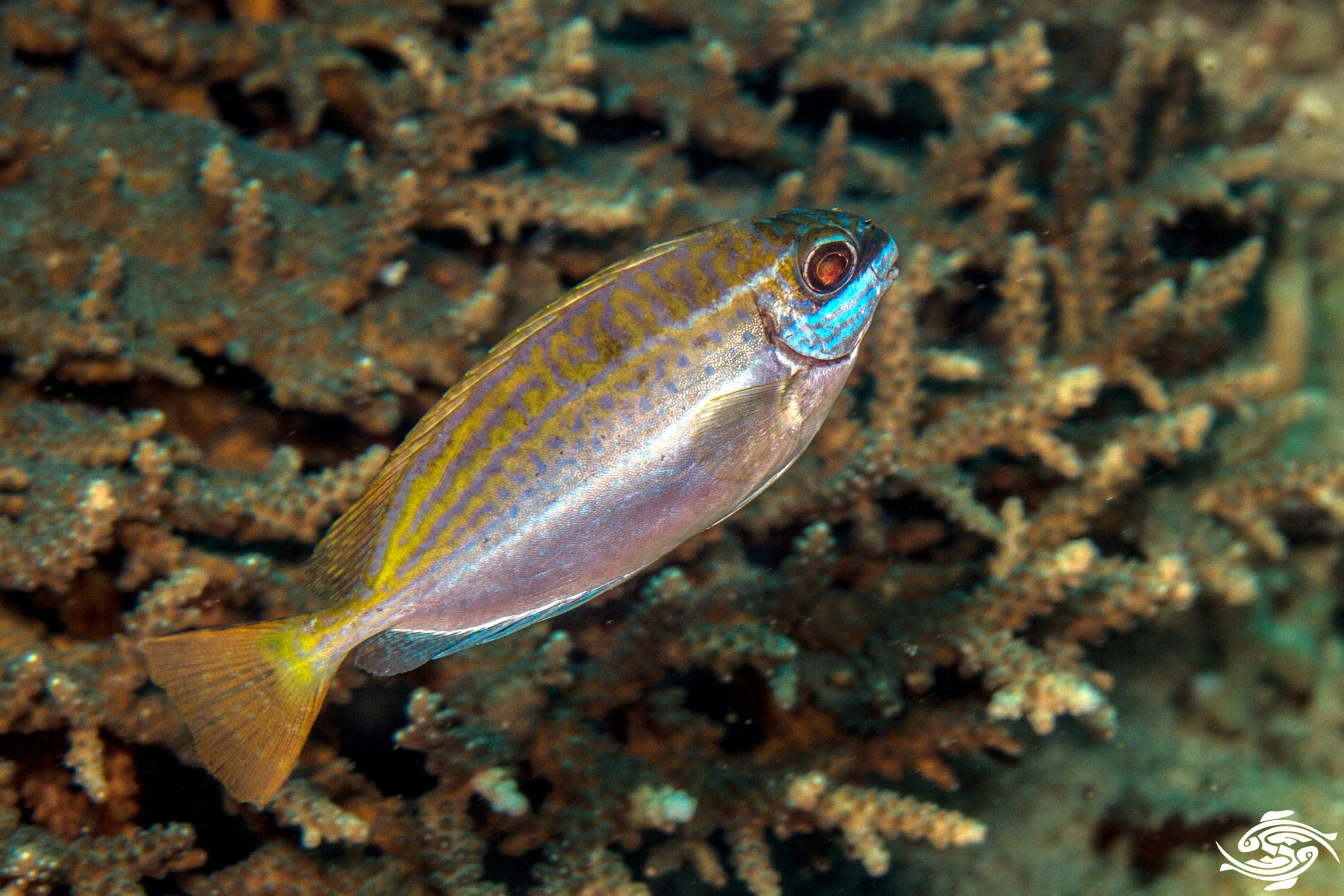 The Dusky Rabbitfish (Siganus luridus)is also known as the Squaretail Rabbitfish and the Dusky Spinefoot . They were originally described by Rüppell in 1829.  The Siganus genus has had somewhat of a history but the classification is recognized today.

All Rabbitfish have extreme colour changing abilities and this certainly contributed to the confusion with many species being described several times in different locations. This species is no exception and their night colours are quite different to the several possible day colours. As one can see in the images they have quite a repertoire of colours. It might be more appropriate to call them Chameleon fish. 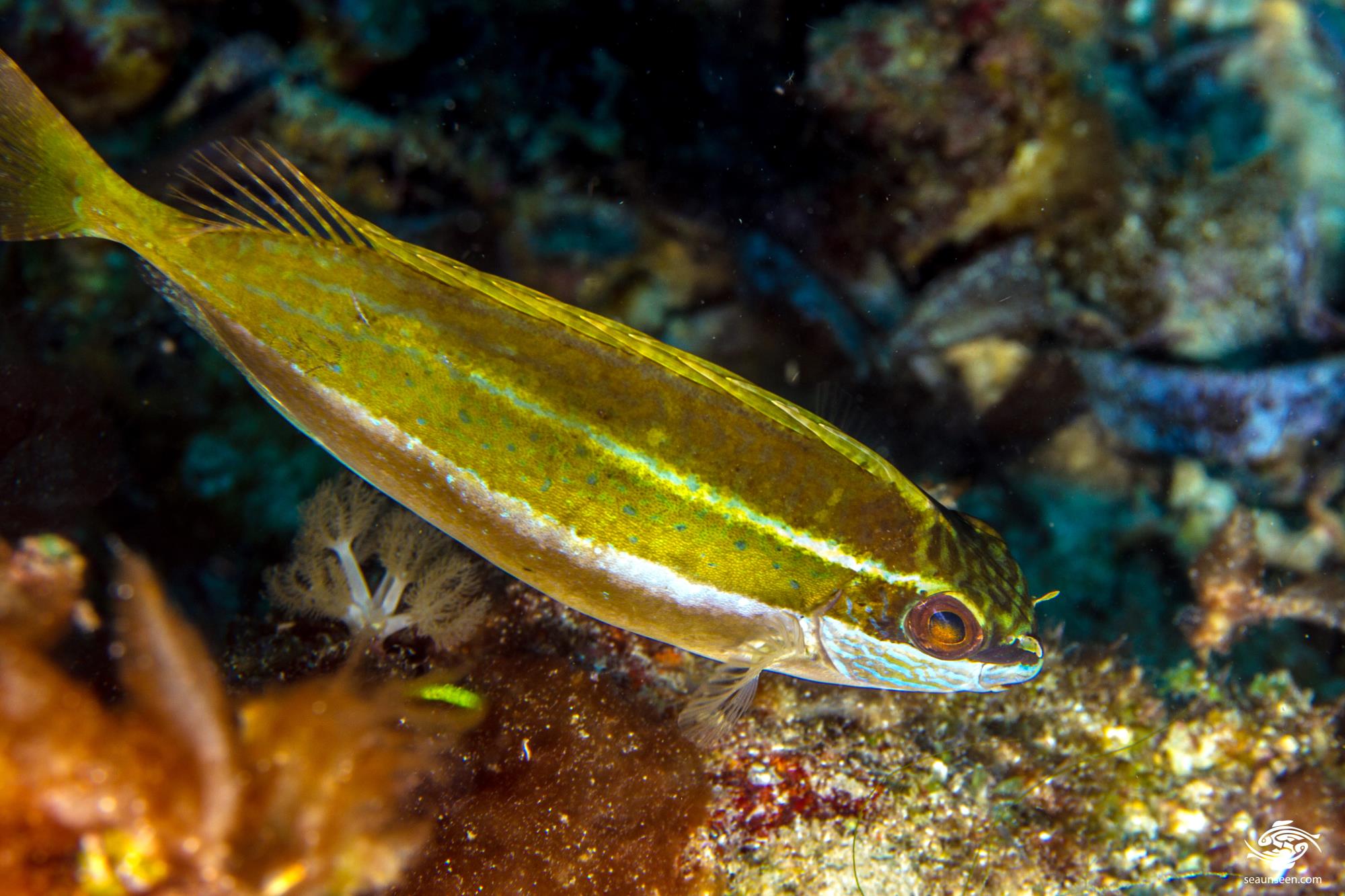 Rabbitfish obtain their name from a superficial resemblance to Rabbits, having large eyes and a small mouth. Personally the resemblance is hard to see but the name is there.  With their color changing abilities they might be more aptly named Chameleon fish.

The Dusky Rabbitfish has a an extended oval body with a pointed mouth.  The body is more elongated and not as deep than the other Rabbitfish in the area. The colors can vary tremendously.  During the day the body is usually split into two colour zones with the upper section being darker. This dark section varies between body varies between indistinct yellow stripes with blue dots and blue on the cheeks to solid green yellow with blue spots. At night the upper body is black and white but if they are in the sea grass as they often are, the body is green. They grow up to 30 cm in length but around 20 cm is more common. 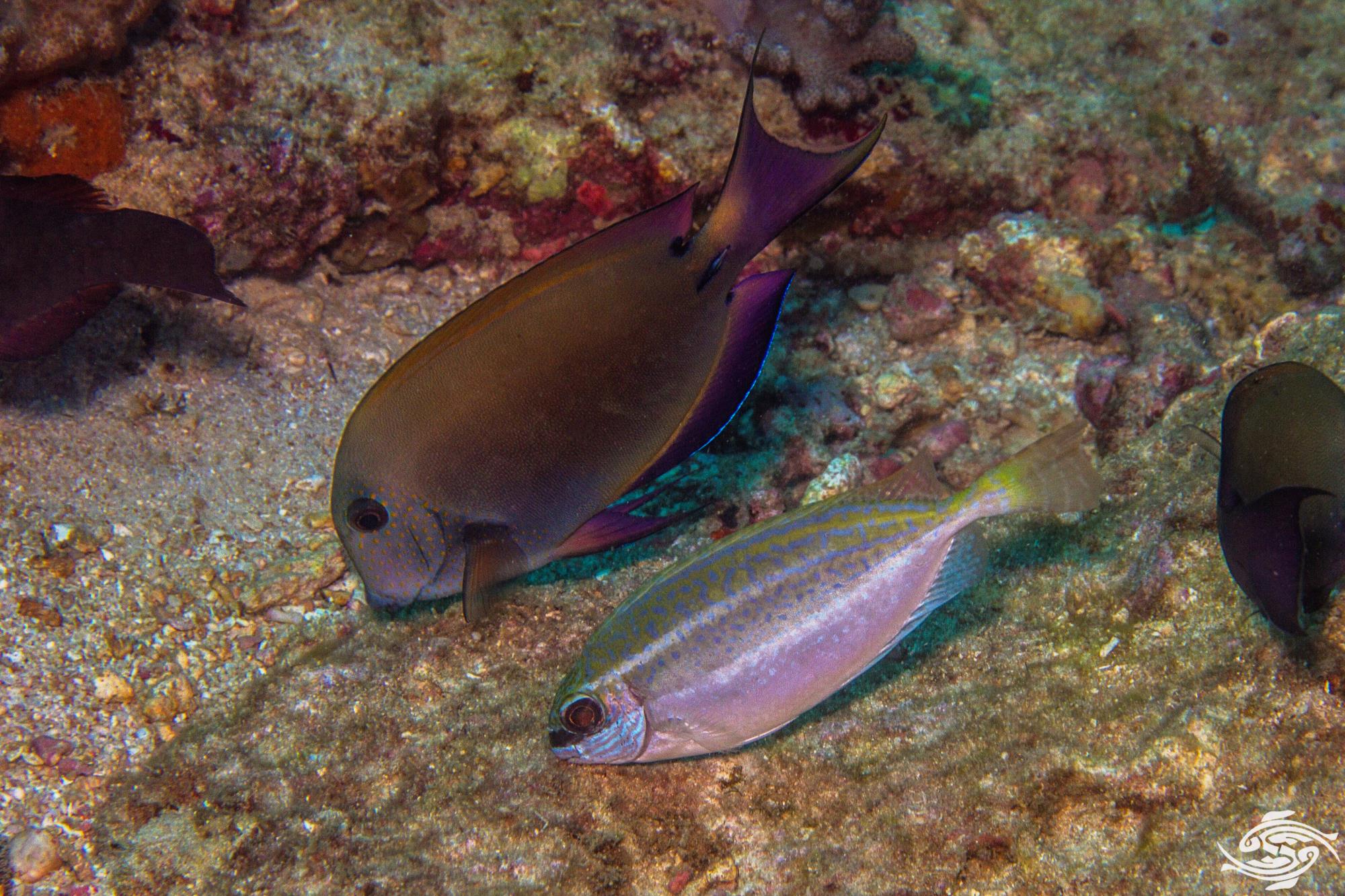 During the day the Dusky Rabbitfish is normally seen swimming low over the reef or rubble areas in-between the reef and at times grass beds.  In Tanzania large adults have become a rare sight due to overfishing. Often the juveniles are seen swimming in grassy beds  where they form small shoals.  At night the adults seem to have a preference for sleeping in grass beds. When threatened they raise their dorsal fin for protection. The adults are either seen singularly or in small groups and often feed with juvenile parrotfish and Surgeonfish. They are usually seen above 15 meters. 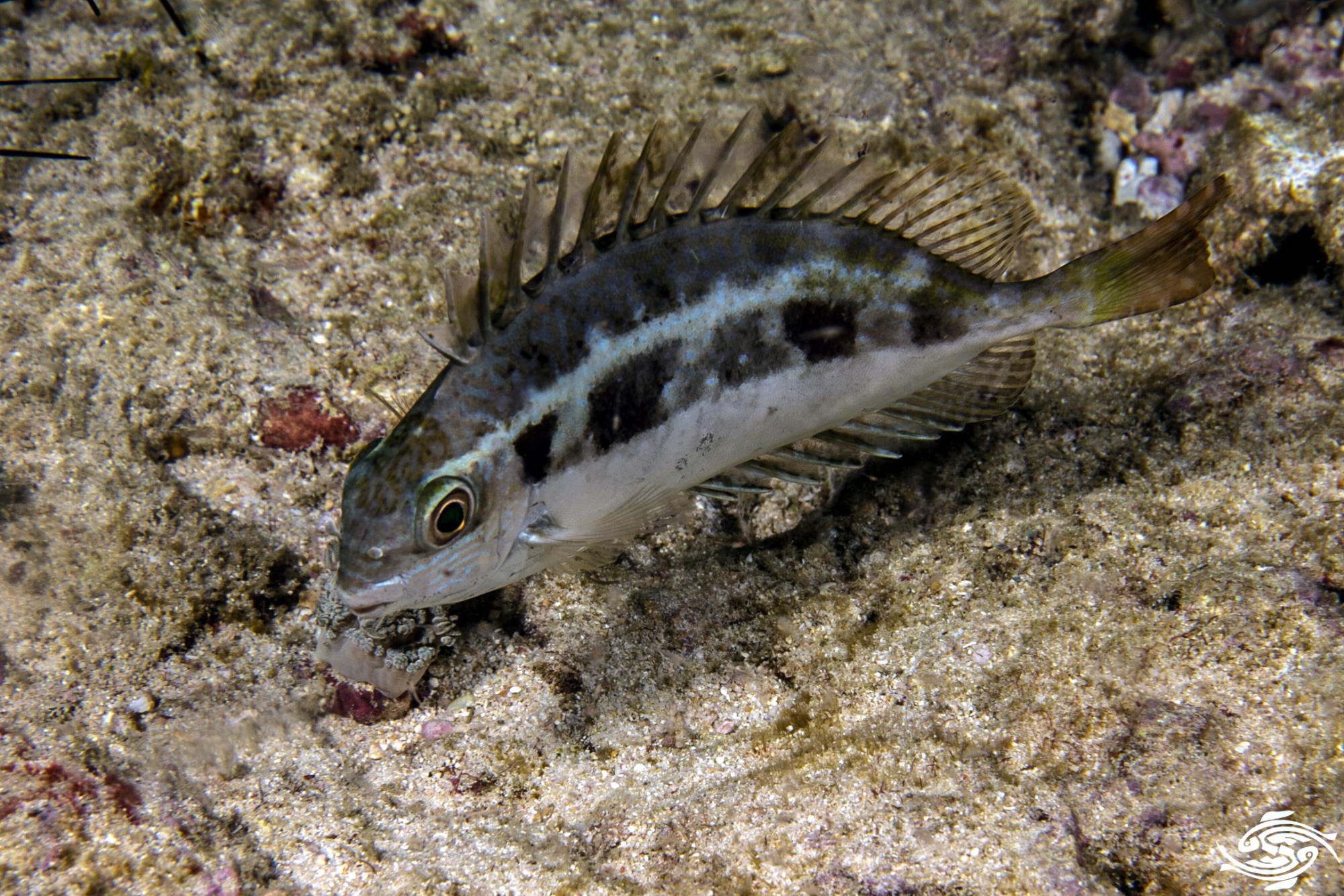 Dusky Rabbitfish are found from East Africa up to the Red Sea and across to the Western Indian ocean Islands. They have also migrated up the Suez canal into the Mediterranean. 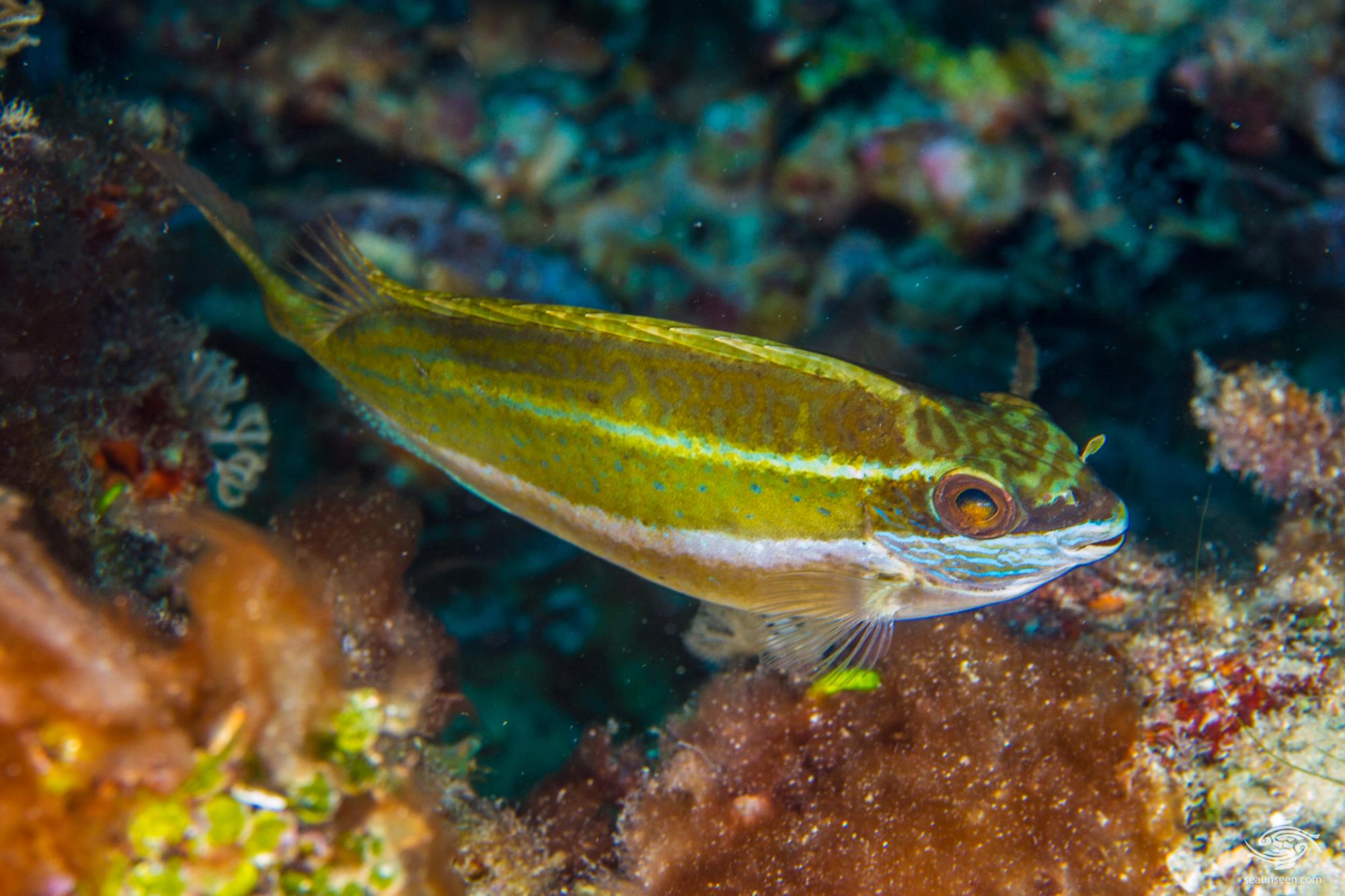 The Dusky Rabbitfish feed on benthic algae. These benthic algae are collected by local fishermen in Tanzania and Kenya and are placed in fish traps as bait. This can be seen in the image two down. 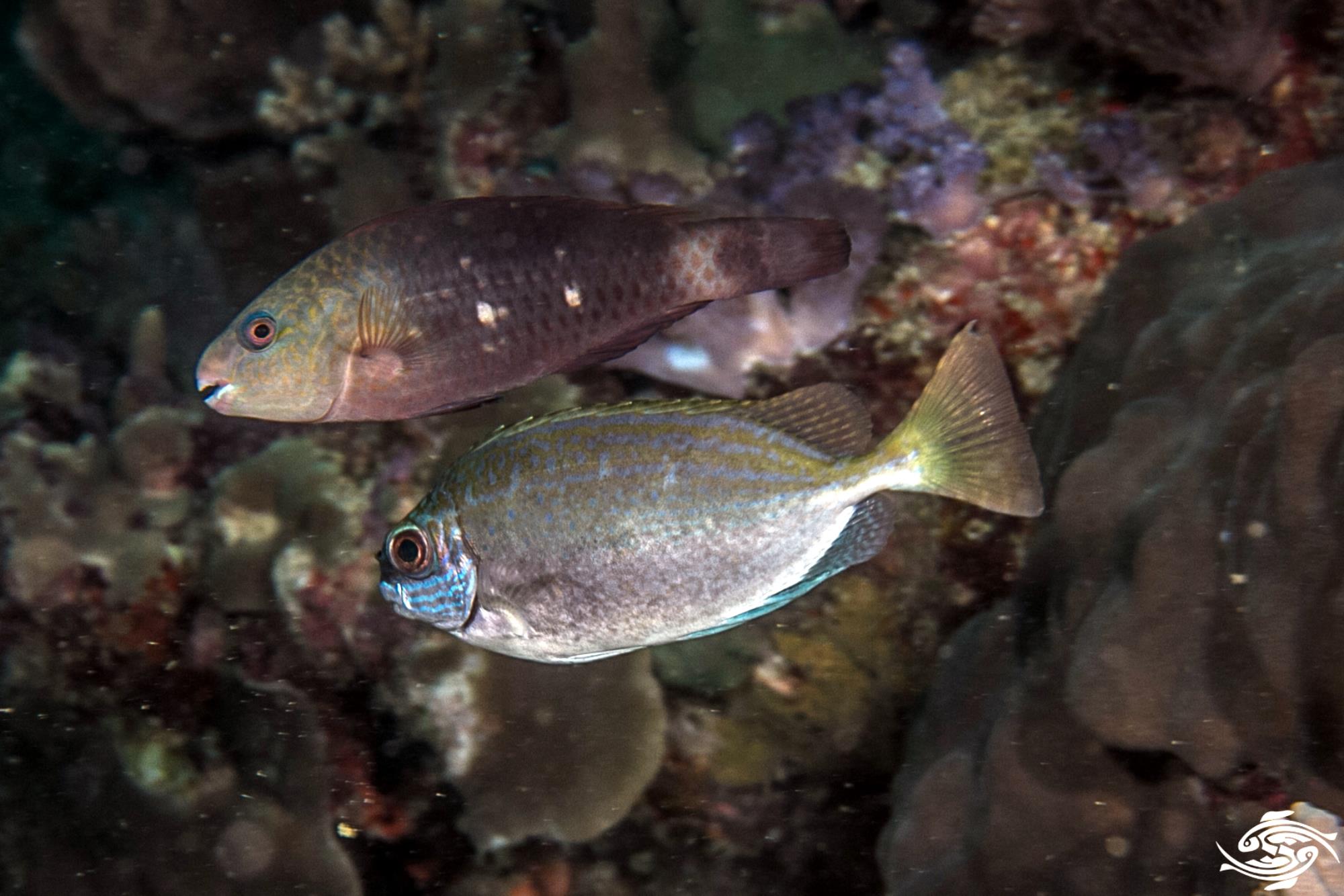 There seems to be little research done on their breeding habits,  given that they small shoals, breeding is likely to take place in group spawning. The eggs are adhesive. 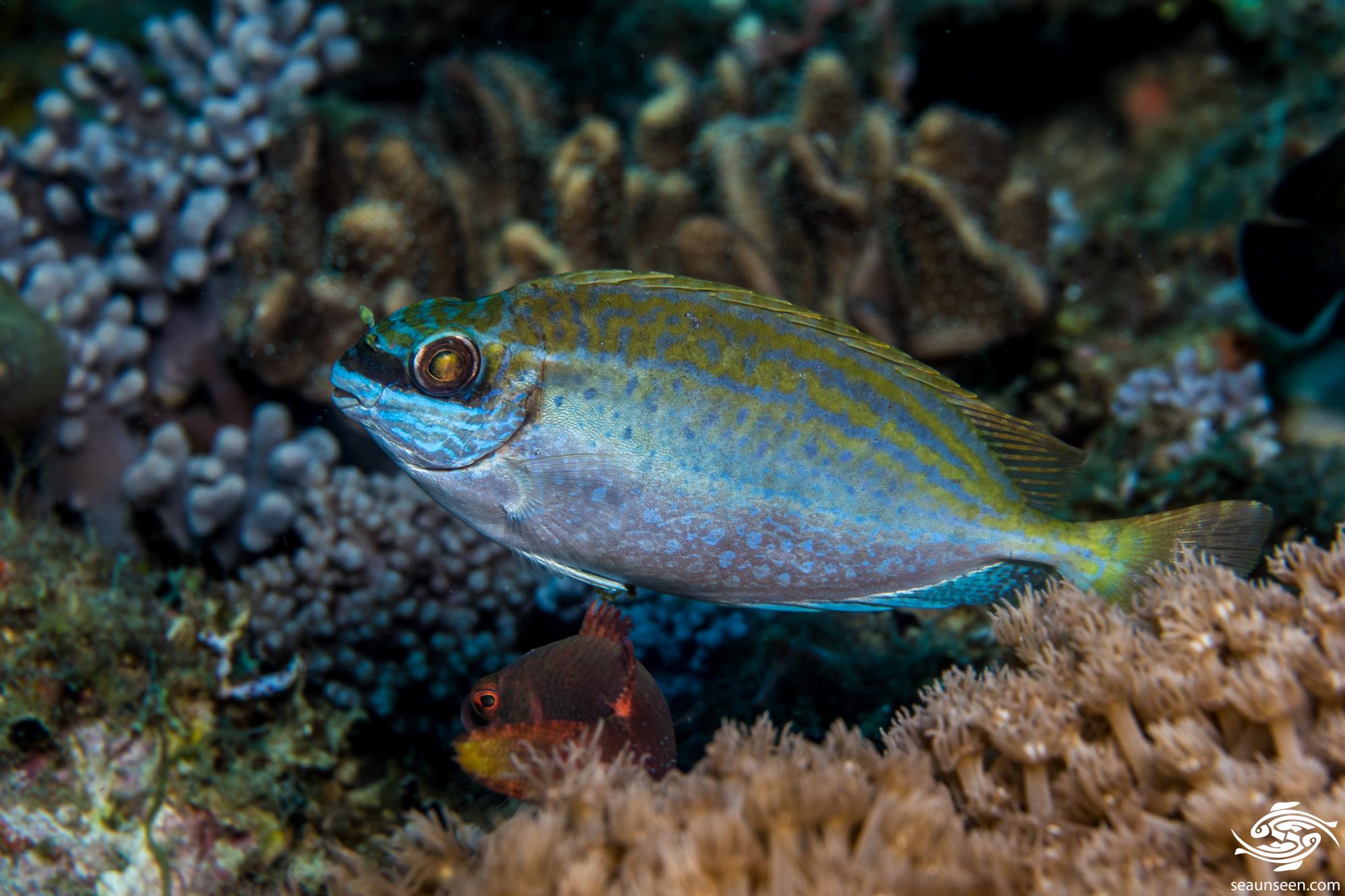 The Dusky Rabbitfish is caught by fishermen  in traditional basket fish traps pictured below as well as in gill nets in Tanzania. This heavy drain has dented the population levels on much of the Tanzanian coast. The more mature fish are a rare sight these days outside of the marine parks. They are also caught by dragging  nets across the bottom which causes great damage to the reef and rubble areas.