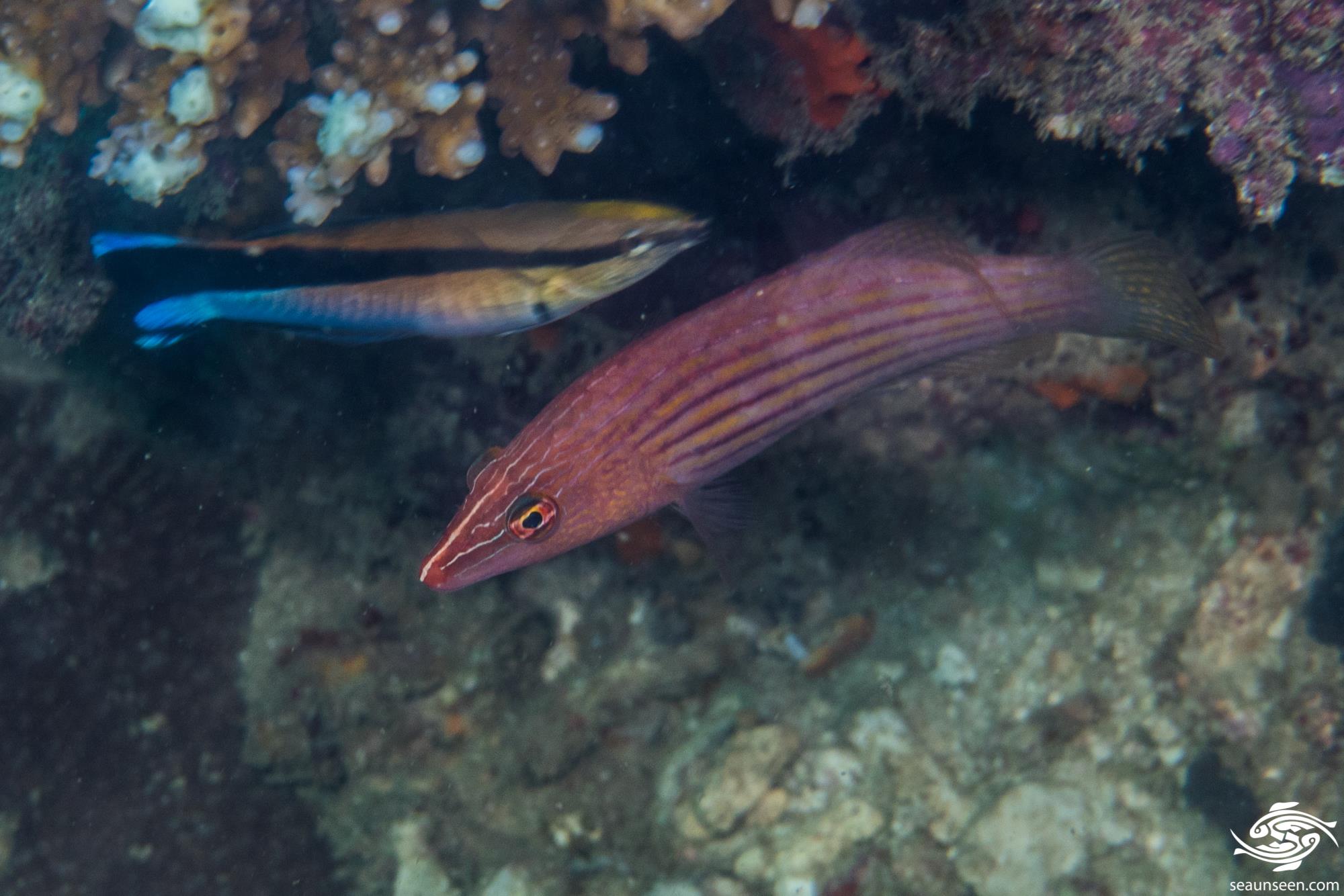 The Eight lined wrasse (Pseudocheilinus octotaenia) is also known as the Eightstripe Wrasse or Eightline Wrasse.  They are similar looking to the Six Line Wrasse  (Pseudochelinus hexatania) but they are slightly larger with a longer more tapered head and their colors are not as vivid. Their behaviour also differs and they are not as cryptic as P. hexatania.  They are not at all common in Tanzanian waters and are rare. 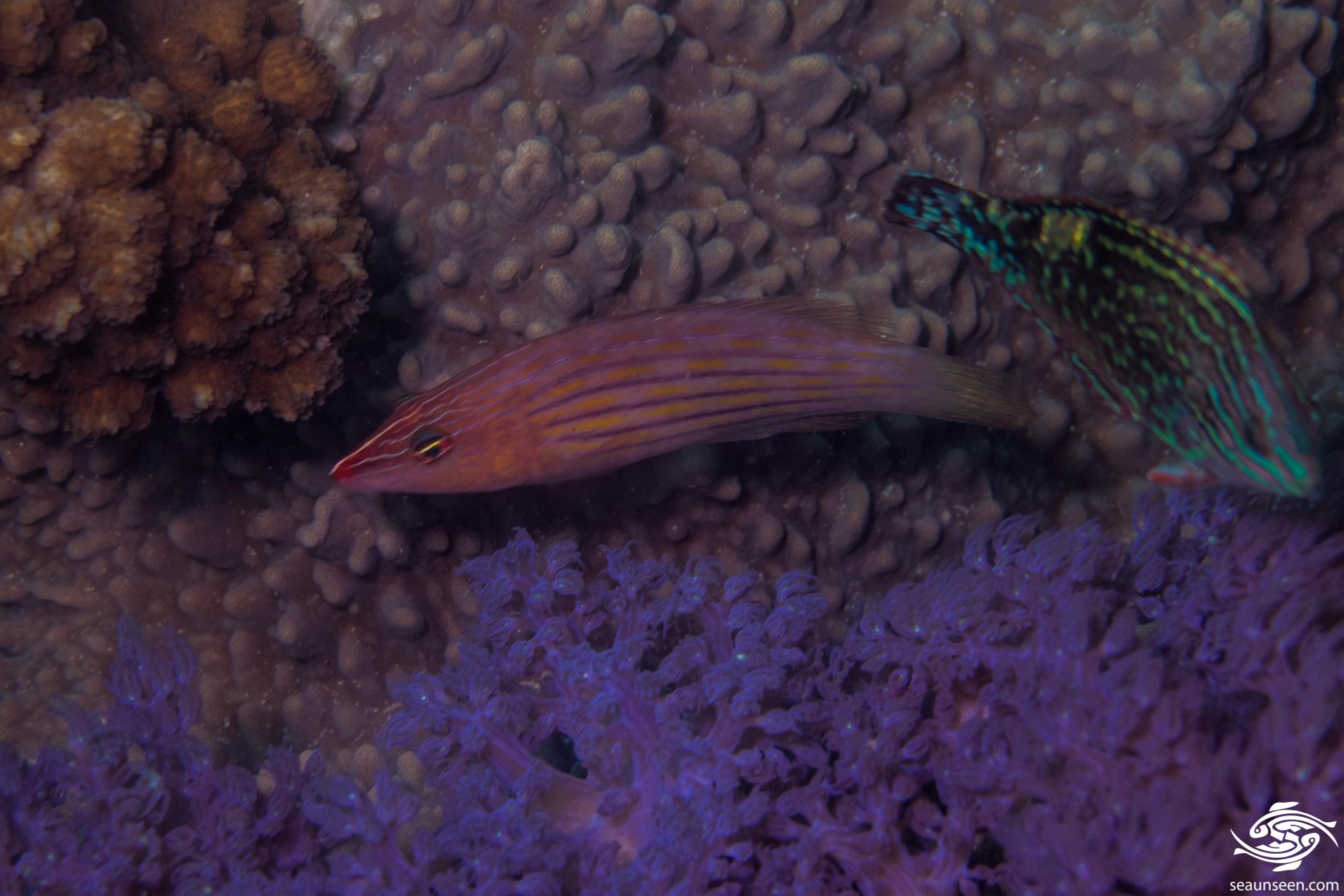 Eight line wrasse have eight horizontal dark purple stripes across the body which extend back onto the caudal area. The body is a yellow orange color with a reddish tint on the area between the eyes and the mouth. This area is covered in thin white stripes. The area on the lower jaw has no stripes but rather has a mottled yellow orange pattern. The eye has two white lines across it at a 45 degree angle. 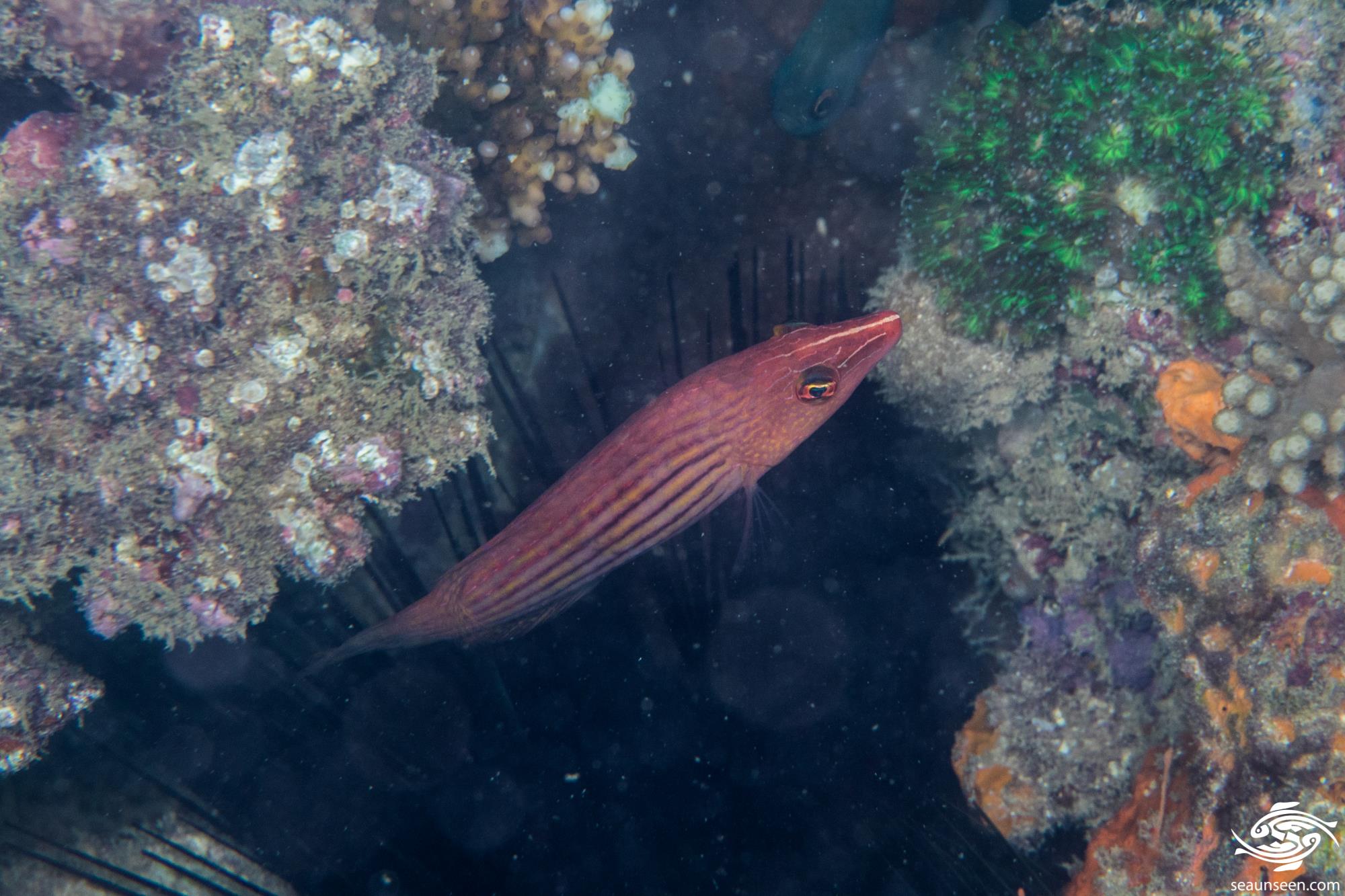 The Eight line wrasse is very rare on the east coast of Africa and we have only seen them on one offshore reef north of Dar es Salaam in approximately 12 to 15 meters. The only other area we know of them being seen is on the top of Aliwal shoal in South Africa. A fairly unusual distribution.

They are not as shy as their similar looking relations P. hexatania and seem to swim freely around large features in the open, seemingly being fairly curious of a diver, although they do keep their distance. They are usually seen singular. 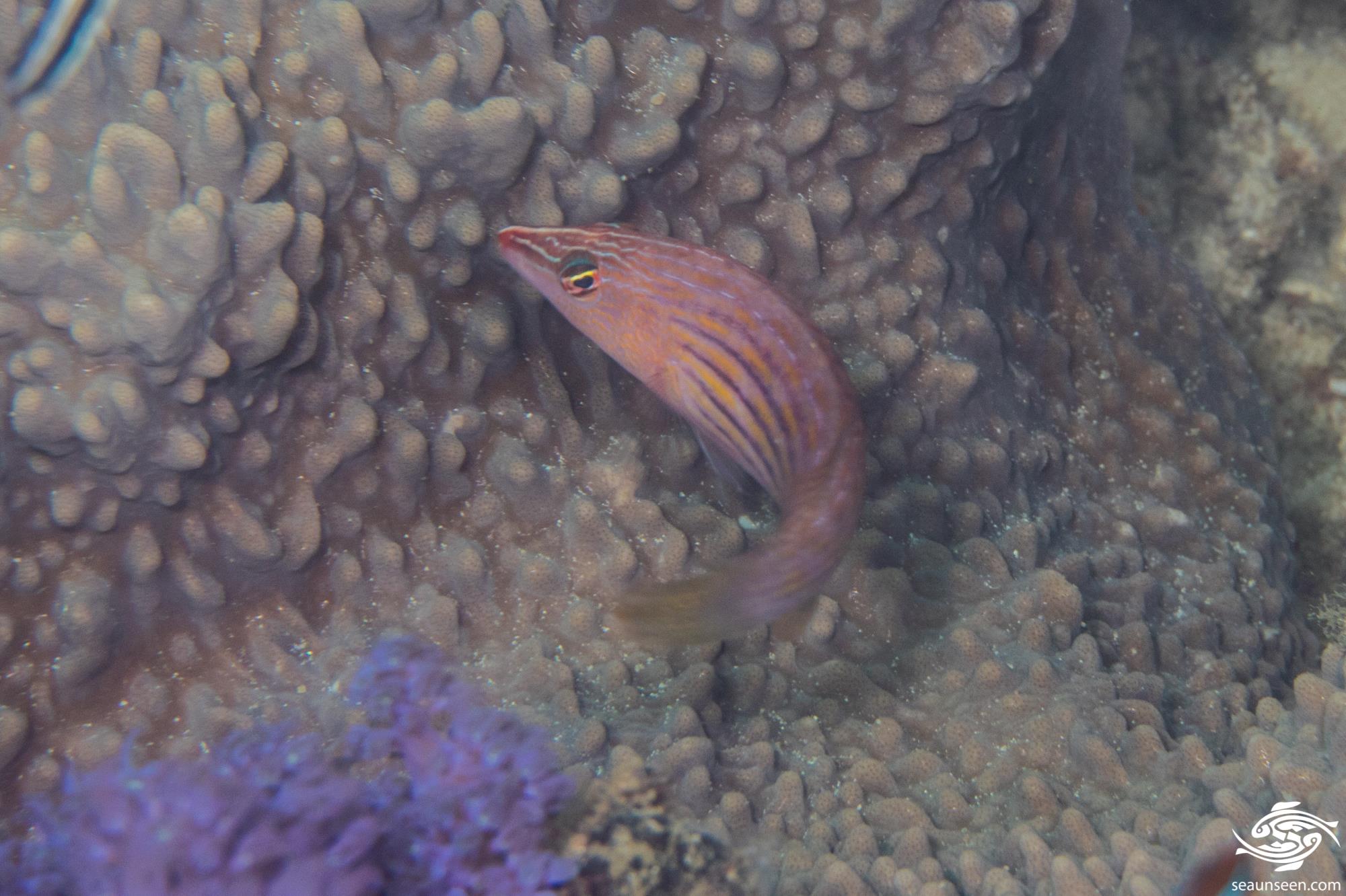 The Eight Line Wrasse is found across the Indo Pacific area from East Africa to Okinawa in the north and Hawaii in the east.  They mainly prefer being close to corals or rubble on offshore reefs. 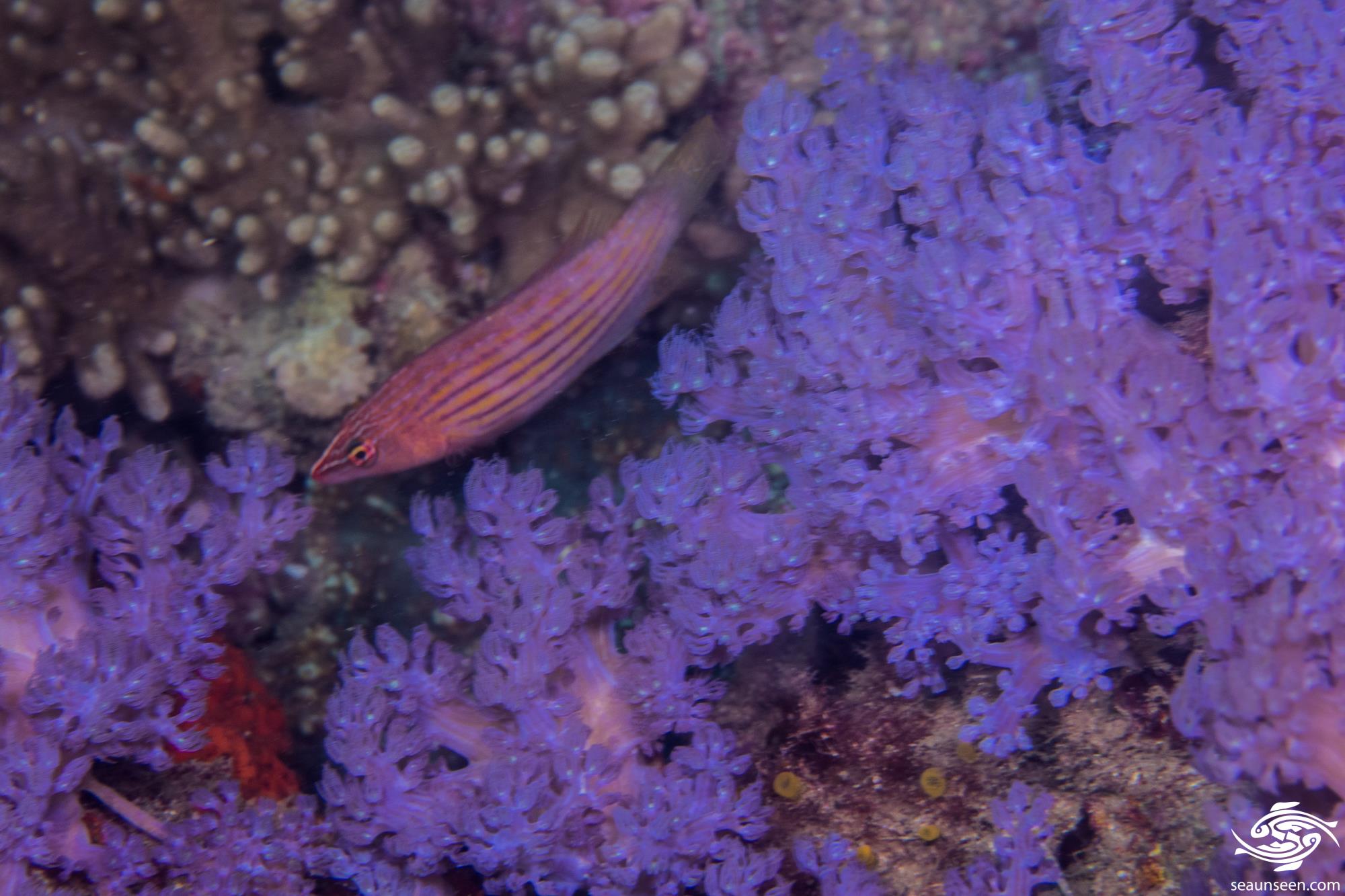 The Eight line Wrasse feed on small bottom dwelling invertebrates that they pick off with their pointy mouth and small fishes have been found in their stomachs as well. 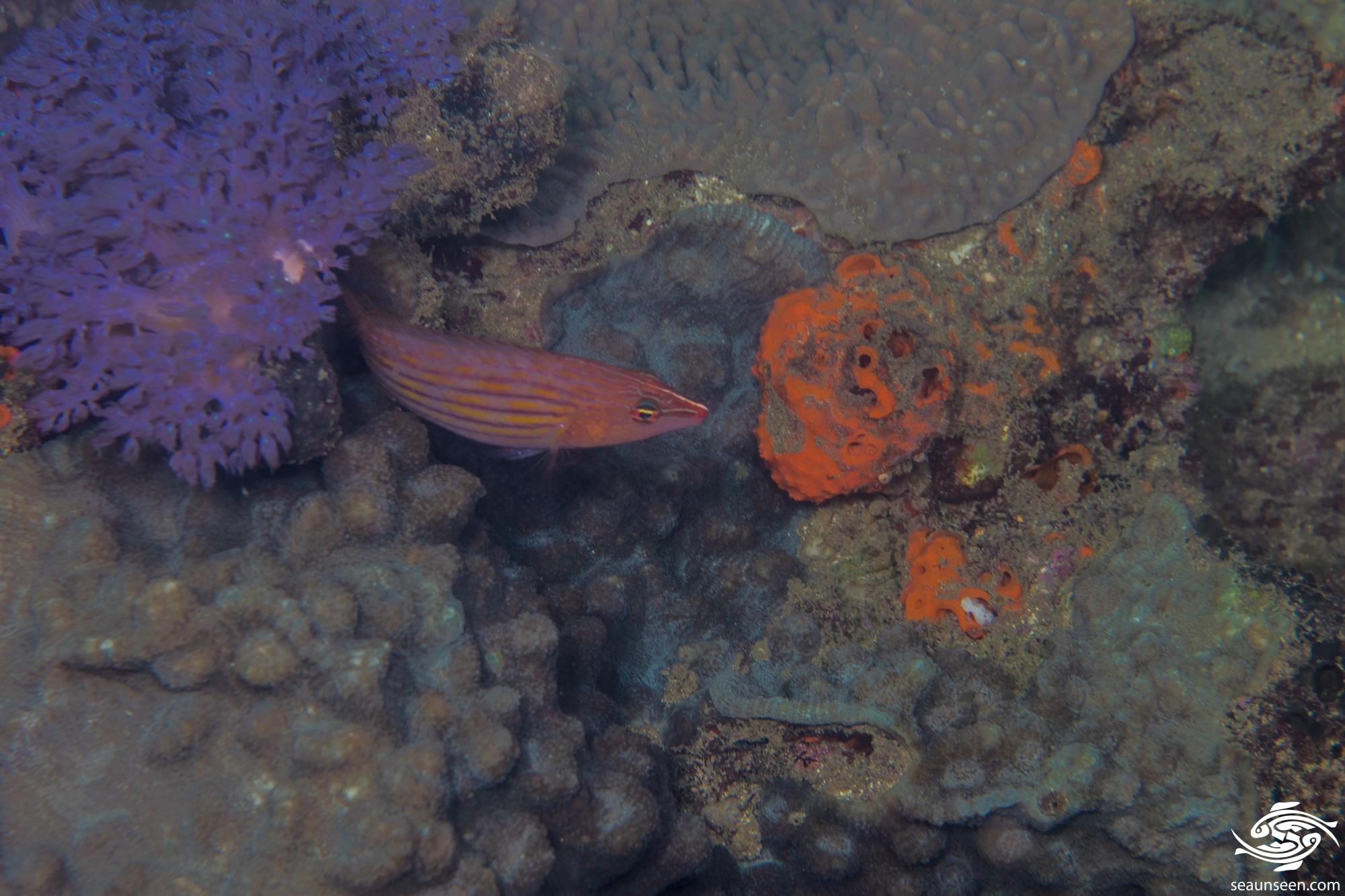 Little is known of their reproductive habits, but they are protogynous hermaphrodites and larger specimens will be males who will usually be more vividly colored.

Eight Line Wrasse are probably not commonly kept in aquariums and are said to be aggressive towards other wrasse.  Because small crustaceans form part of their diet do not be surprised if your smaller crustaceans disappear.  The same warning applies to small fish. They may also bully less aggressive fish and care needs to be taken choosing their tank mates. There is an excellent article on keeping these fish in aquariums which sets out the advantages and the pitfalls here. Before purchasing one it would be a good idea to read it. Regular offerings of live rock with live food on are good for supplementing their diet.