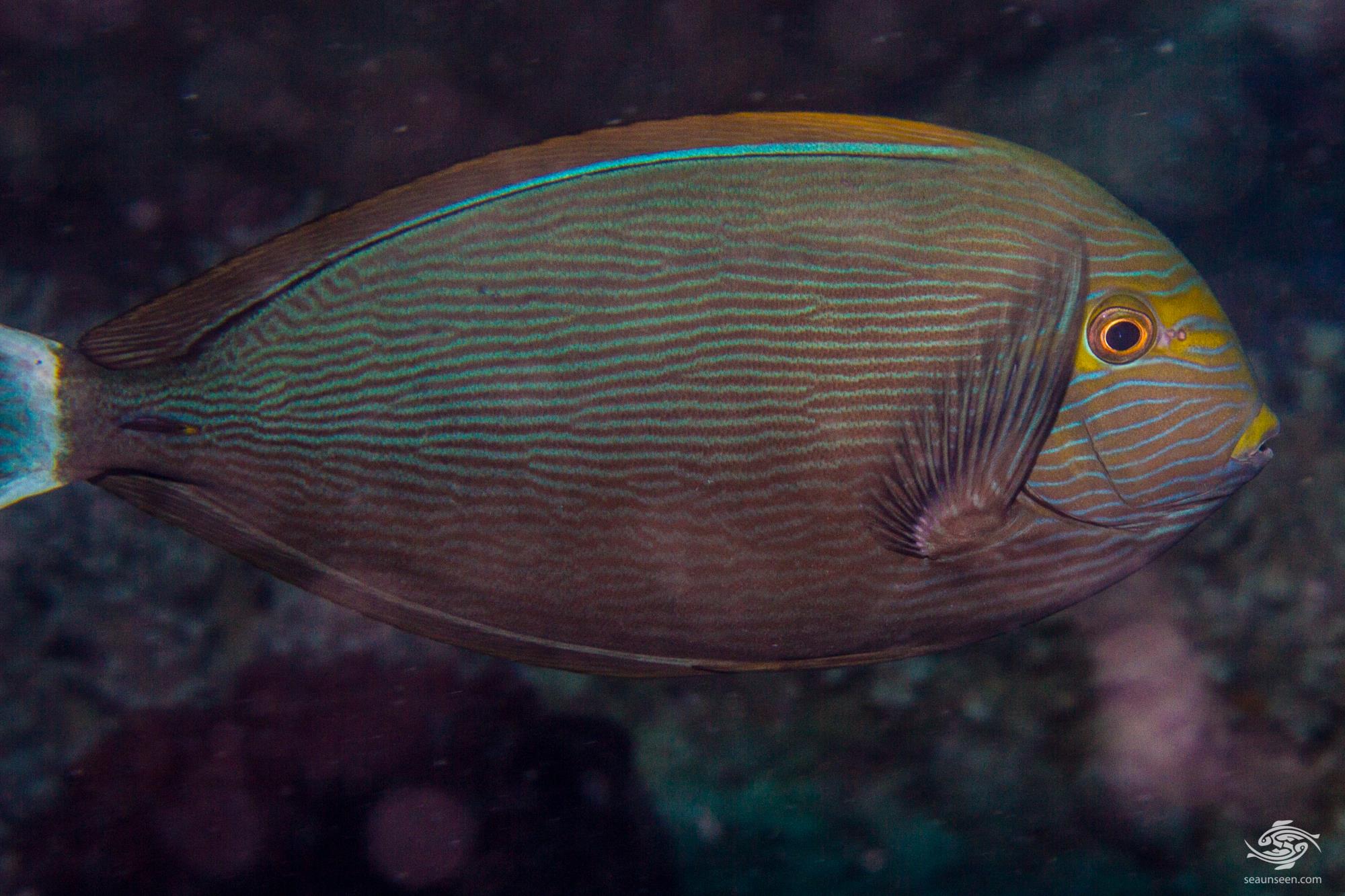 They obtain their name Surgeonfish from these blades in the caudal area. The blades are used for defense and possibly in territorial disputes and can inflict significant damage. The blades are reported to contain toxins but there seems to be no scientific evidence for this. All surgeonfish have very small scales giving them an unusual appearance. Many are able to change their colouration in intensity and colour according to their mood and the Elongate Surgeonfish is perhaps one of the best at these colour changes.

The Elongate Surgeonfish has an elongated oval body tapering back onto a lunate caudal fin with a laterally compressed body. The mouth is proportionally small and protrudes slightly. As mentioned earlier they are capable of changing their colours dramatically. Their body is usually covered in irregular brown and light blue horizontal lines. For most of the time the brown is the more predominant colour giving them a brown appearance.

But they have the ability to dull the brown and increase the intensity of the blue giving them a light blue overall appearance. They have a yellow stripe across the eye which splits into two lines in front of the eye and extends quite far forward onto the forehead but the lines do not meet up. There is a solid blue line running just below the dorsal fin. The dorsal and anal fins are usually a brown colour, but they seem to be able to vary these colours independently of the body colour.  There is often a white bar on the base of the caudal fin but this can be switched on and off. The rear of the fin is usually brown.  The caudal blade is ringed in black with a touch of orange on the leading edge.  They grow up to 50 cm in length but around 35 cm is more common in the wild. 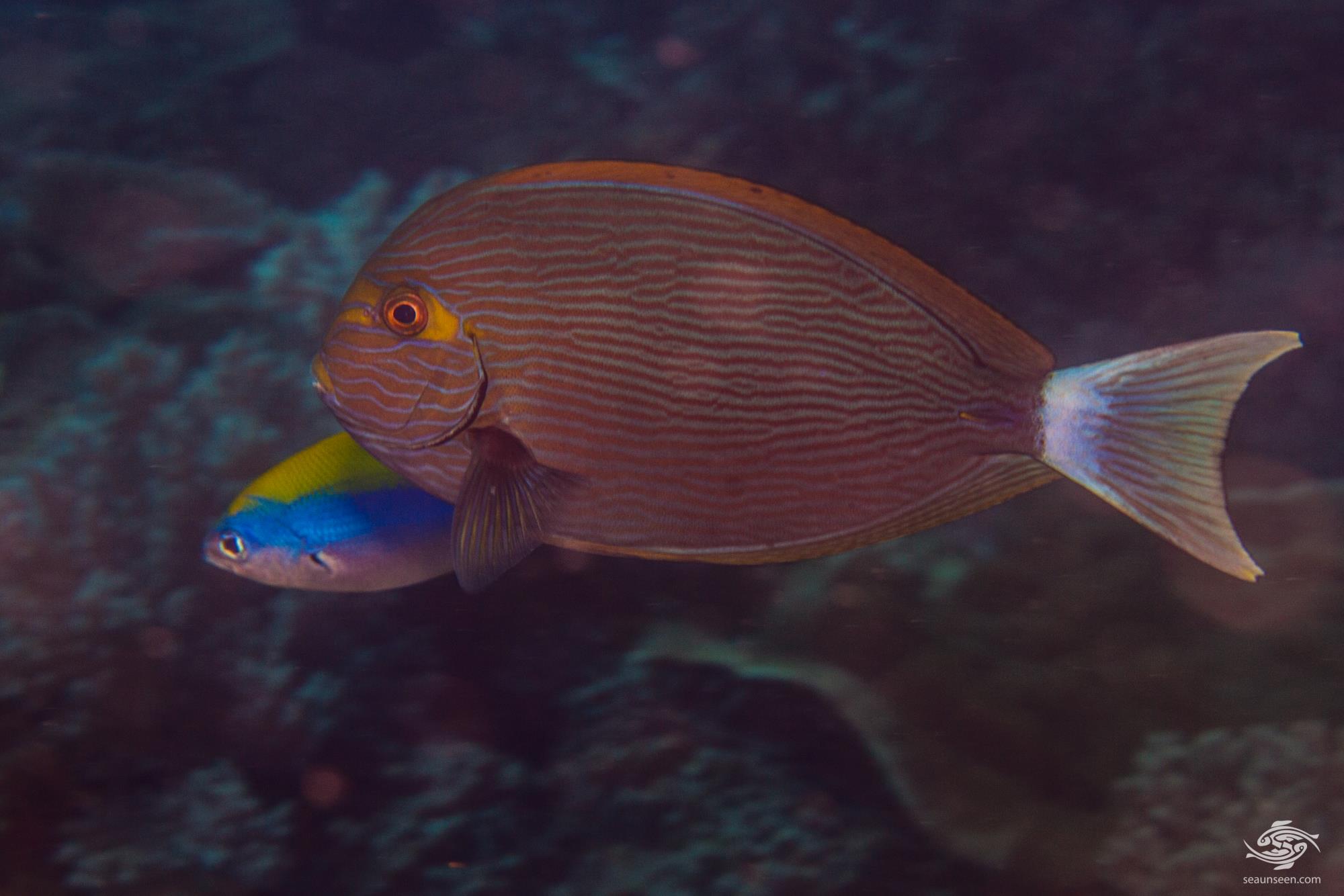 ELONGATE SURGEONFISH IN THE WILD

The Elongate Surgeonfish is fairly common in Tanzanian coastal waters, they are often seen in large shoals of two or three hundred fish swimming above the reef. They seem to prefer offshore reefs but are occasionally seen on the more protected reefs. They are seen solitary on rare occasions and are usually in a shoal. There are often disputes in the shoals, presumably between males fighting with each other. During these fights when one fish attacks another, one of the fishes will invariably change colour from the more usually predominantly brown colour to a light blue colour.  The change is almost instantaneous and is quite fascinating to see.

They are curious fish and will come in to inspect a diver often circling around one but always keeping two or three meters away. After a few circuits they swim off but will usually return again ten minutes later. 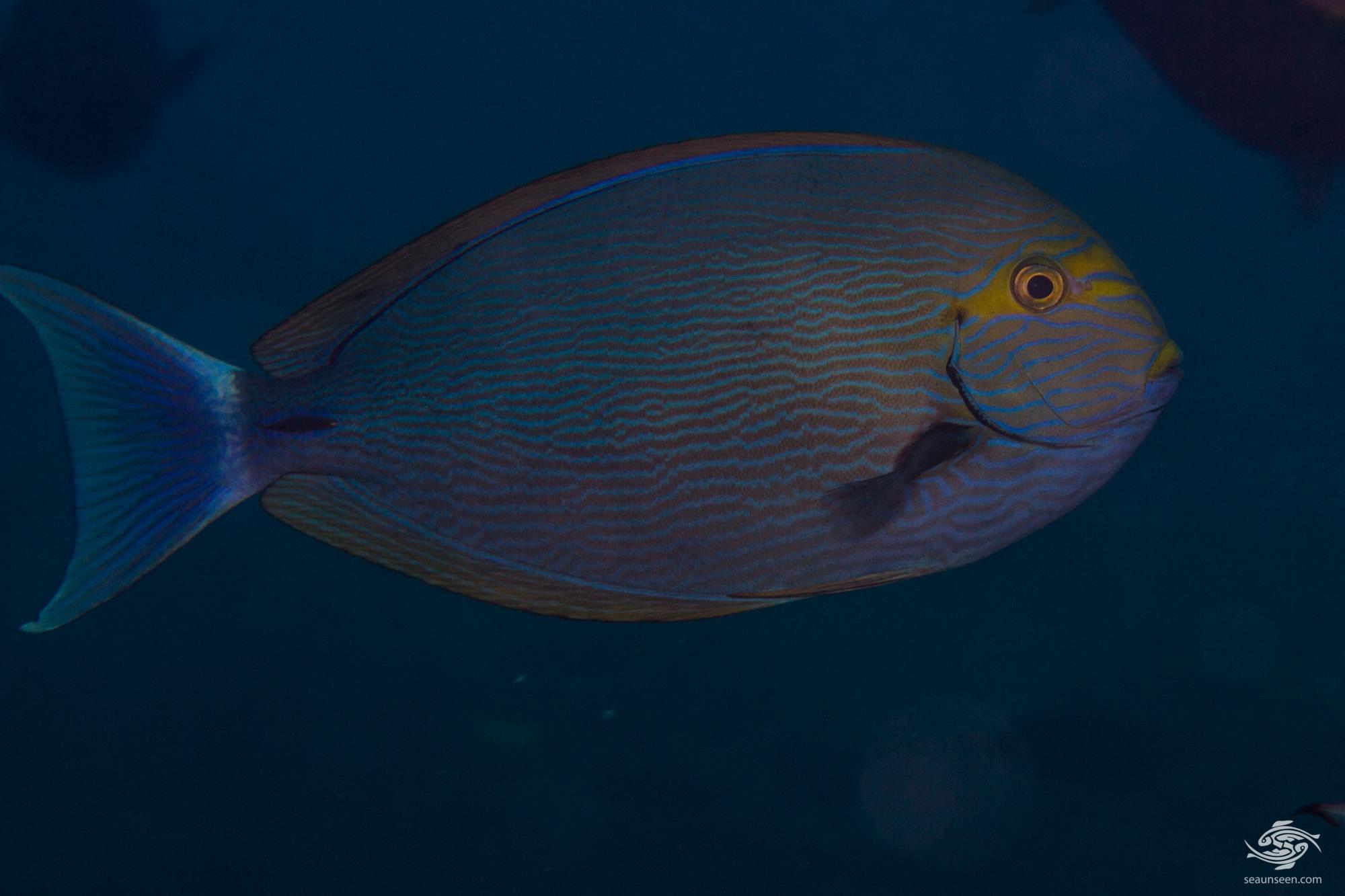 Eyestripe Surgeonfish are found across the Indo West Pacific area from South and East Africa, including the Red Sea, to Southern Japan  down to northern Australia and across to the mid Pacific Islands not including Hawaii. In Tanzania they are most common from 10 meters downwards and we have never seen them shallower.   Their depth range is from 10 to 100 meters. 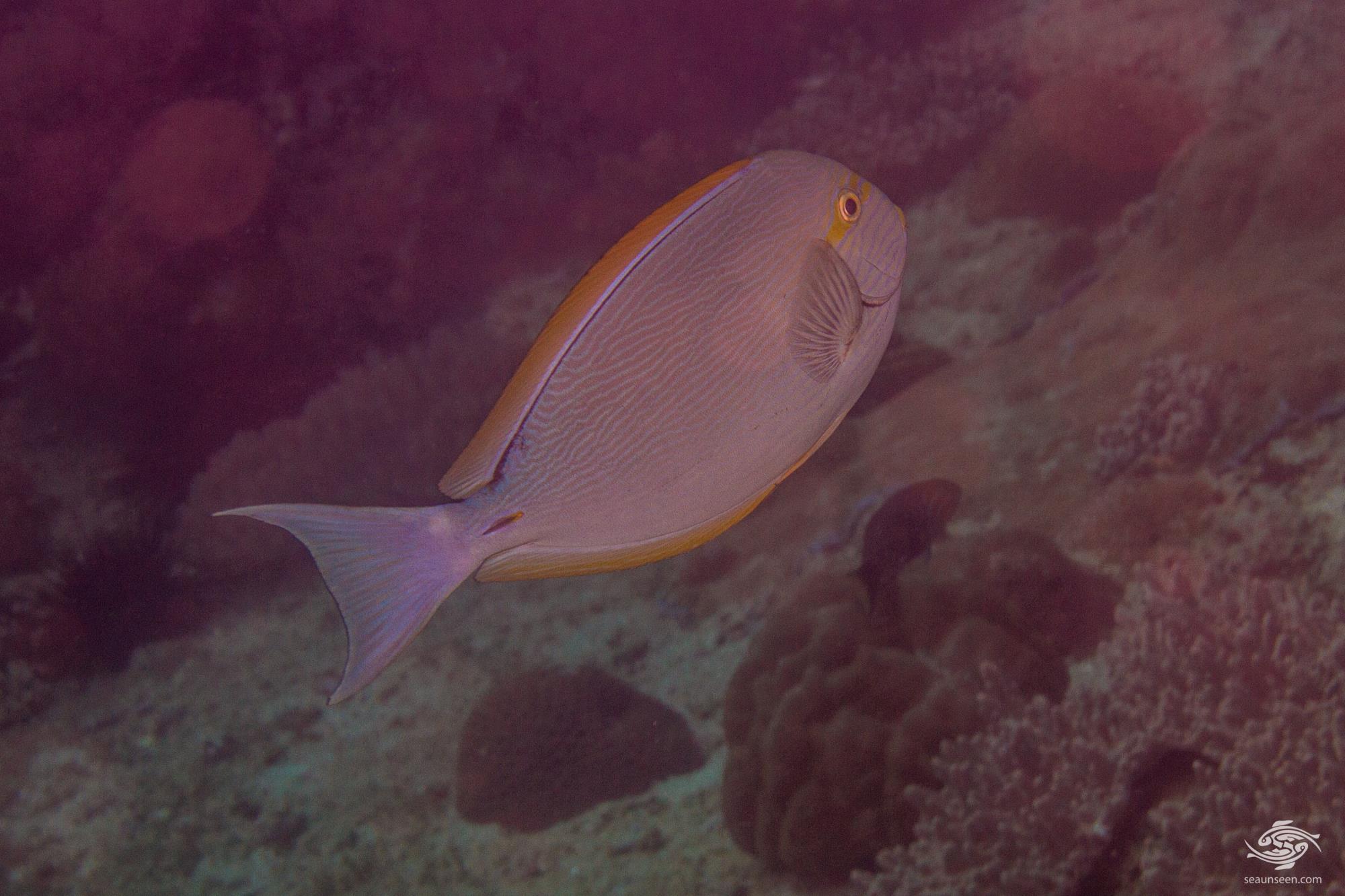 The juvenile Elongate Surgeonfish feed on algae but the adults feed on planktonic matter. They have also been observed swimming with members of the caranx species and eating fecal matter, but we have ourselves never observed this. 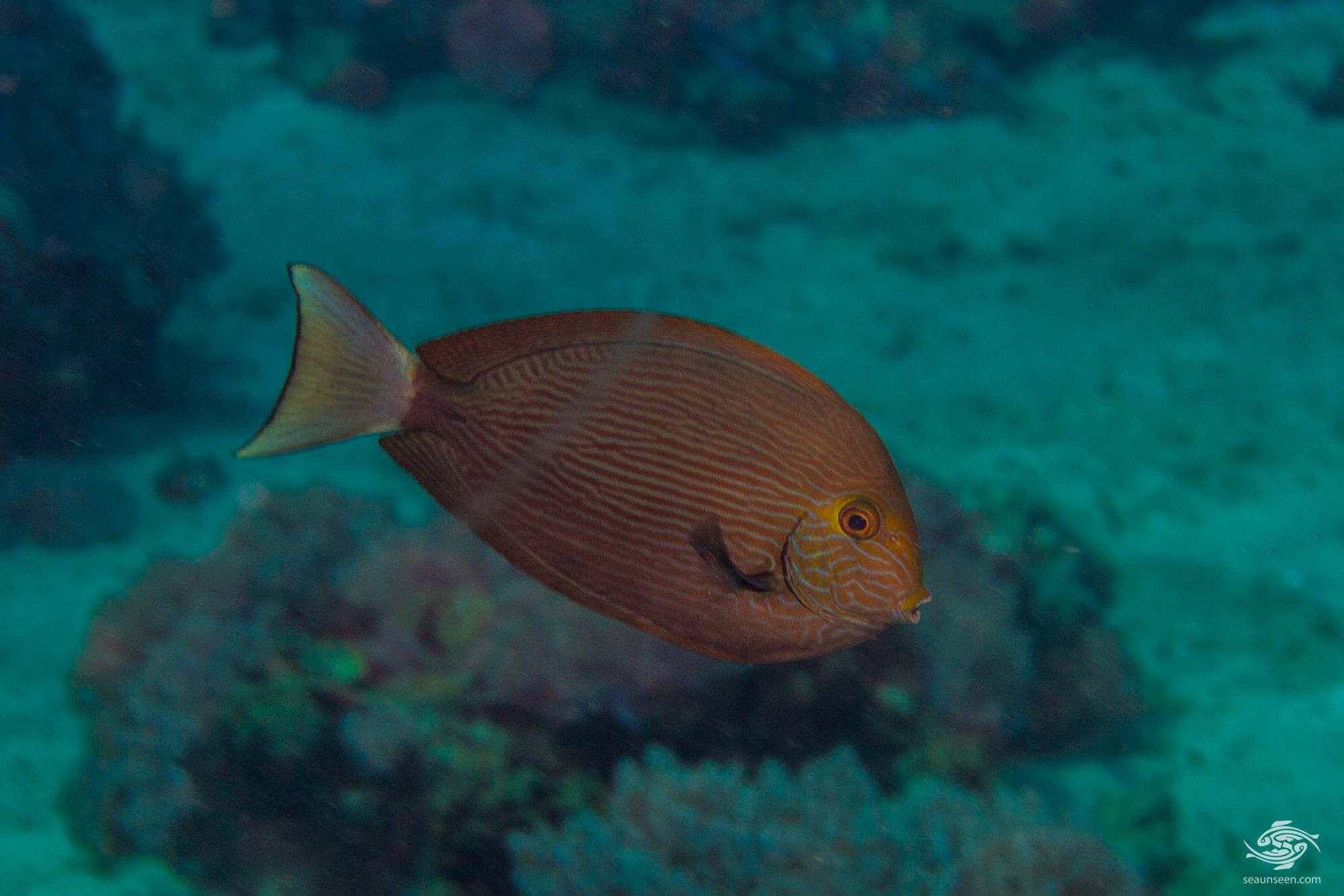 Group spawning takes place with the females releasing spawn into the water table and the dominant male fertilizing the eggs. Once the eggs hatch the larvae go through a planktonic stage before developing into juveniles. 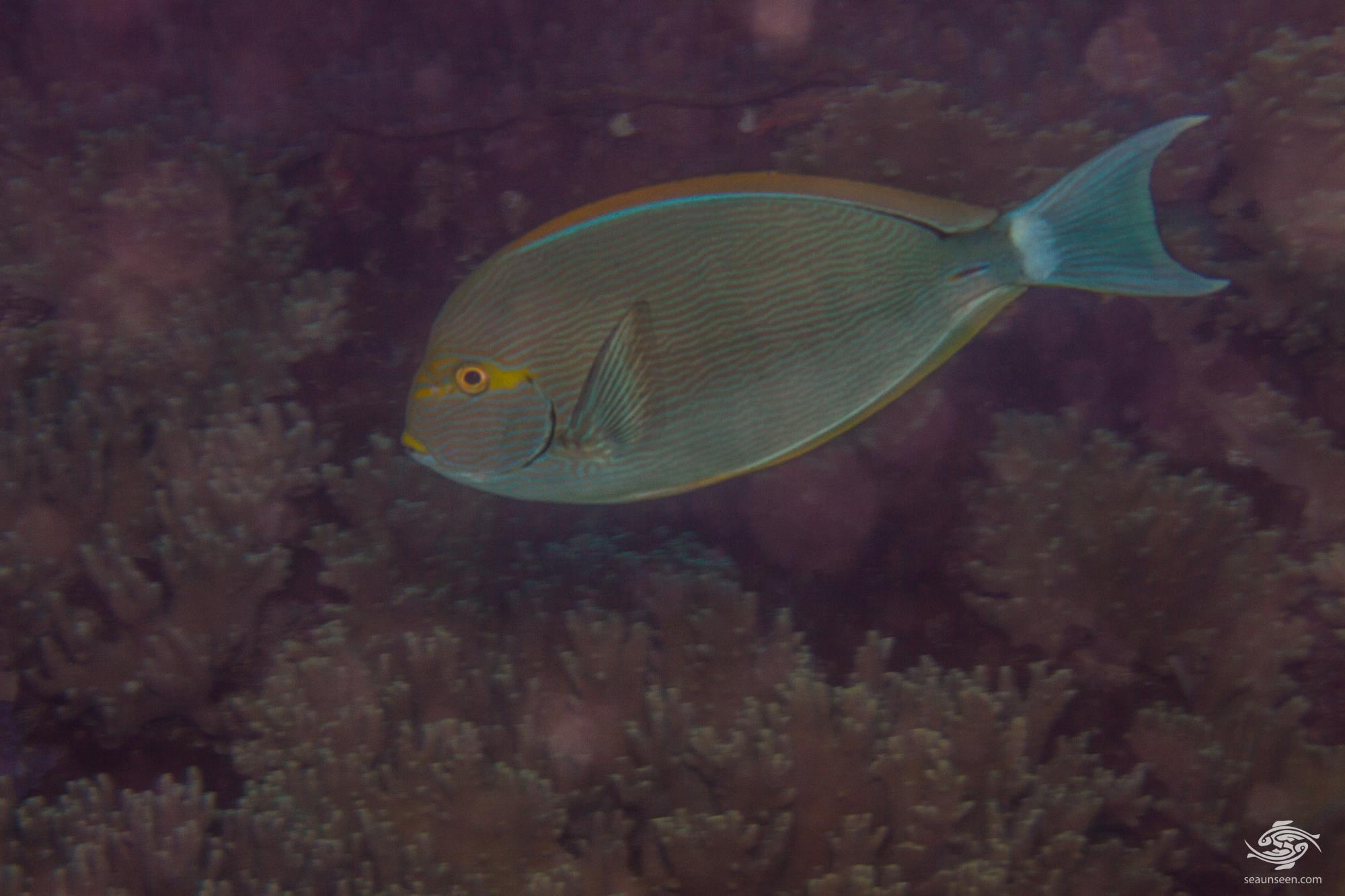 Elongate Surgeonfish are occasionally kept in aquariums but due to their potential size of 50 cm they are suited only to very large tanks and public aquaria.  They require high quality clean water that is well oxygenated. They are fairly easy to feed but a large part of their diet should be algae in one form or another to keep them healthy. Because of their territorial nature they should not be kept with fish with a similar shape or diet. Great care should be taken when moving them as their blades can easily snag in a net or worst case pierce a bag. There is a good article on keeping Surgeonfish here. 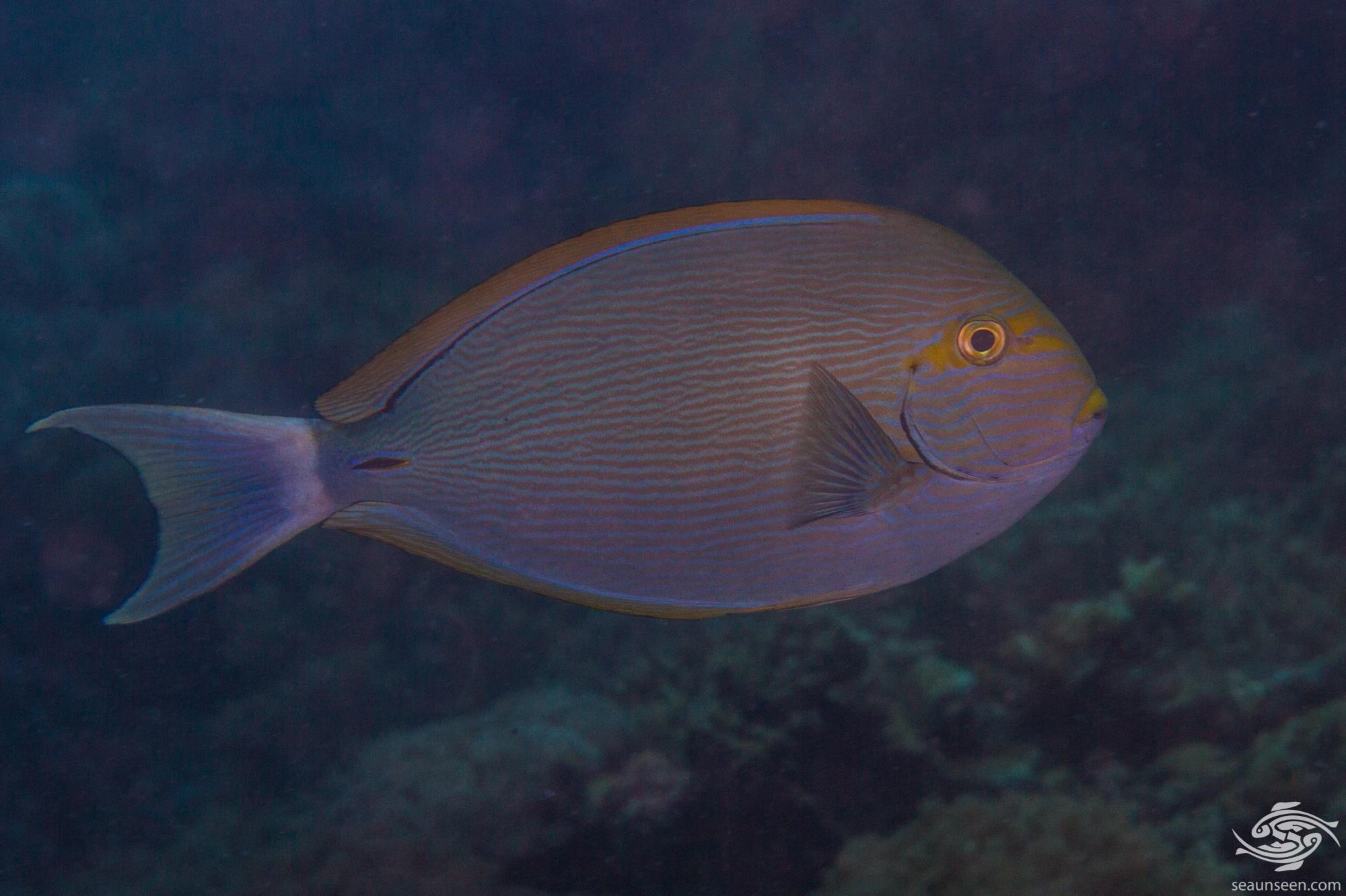 Elongate Surgeonfish are not commonly caught by fishermen in Tanzania . They are however netted or trapped occasionally.  In parts of the Pacific they are exploited as a food source. They are heavily trapped in some parts of their range and are sold fresh.