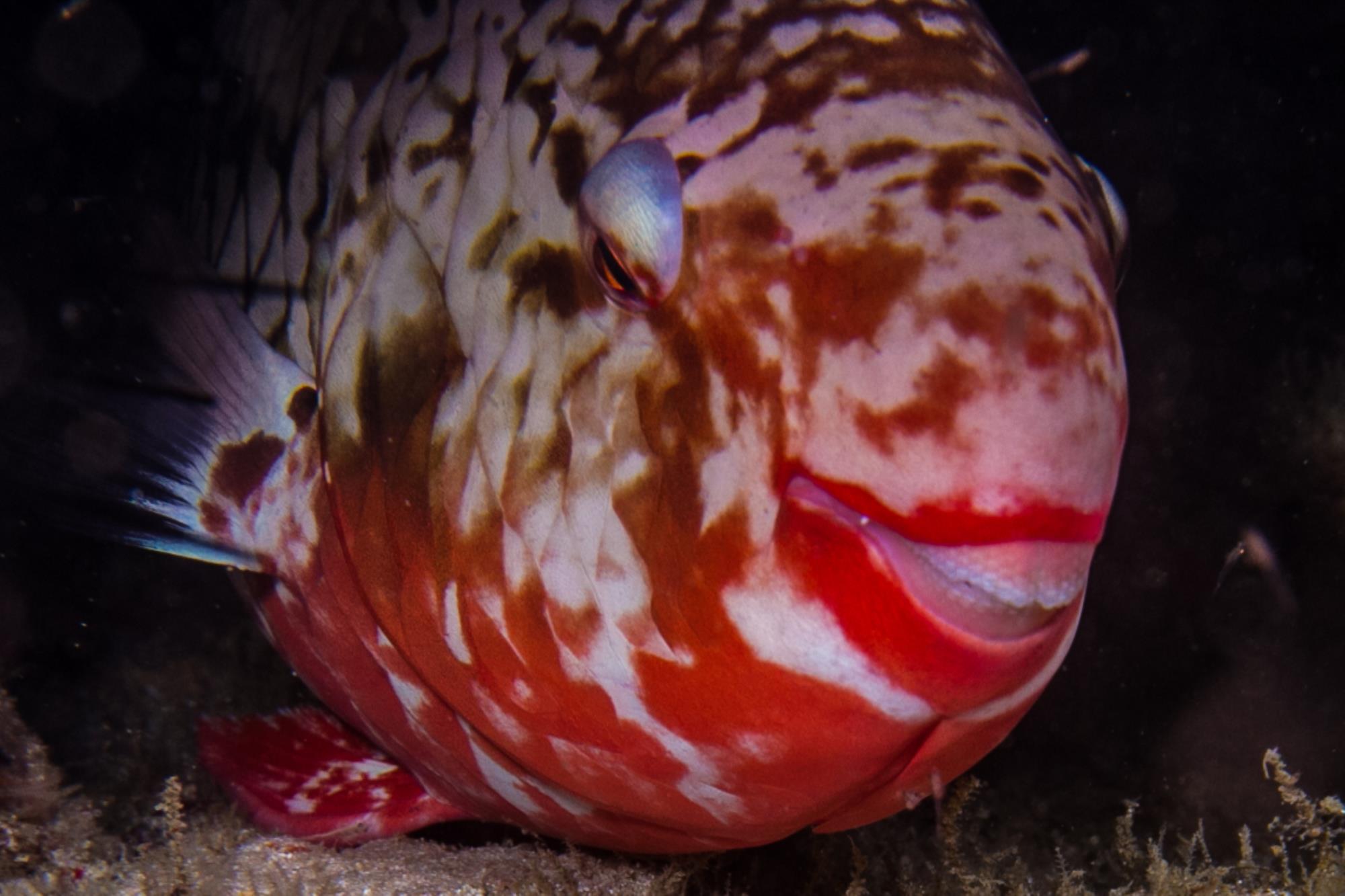 The Ember Parrotfish (Scarus rubroviolaceus)  is also known as the Redlip Parrotfish and Bicolor Parrotfish. Parrotfish obtain their name from their teeth which are fused into a beak.

Within the various species of  Parrotfish which are part of the Labridae family there is considerable divergence in looks between the juveniles and the adults and some females based on social cues change into so called Supermales which are very colorful. Additionally there are regional variations  in looks which combined with their ability to change their colours particularly at night creates a large amount of confusion as to which is which. The specimen above is in its night colors which differ dramatically from the daytime colors.

This species common name comes from the initial phase females which are more common than the males and resemble a burning ember and which have red lips hence their two common names. In Tanzania we have not seen a specimen with a bicolor pattern. 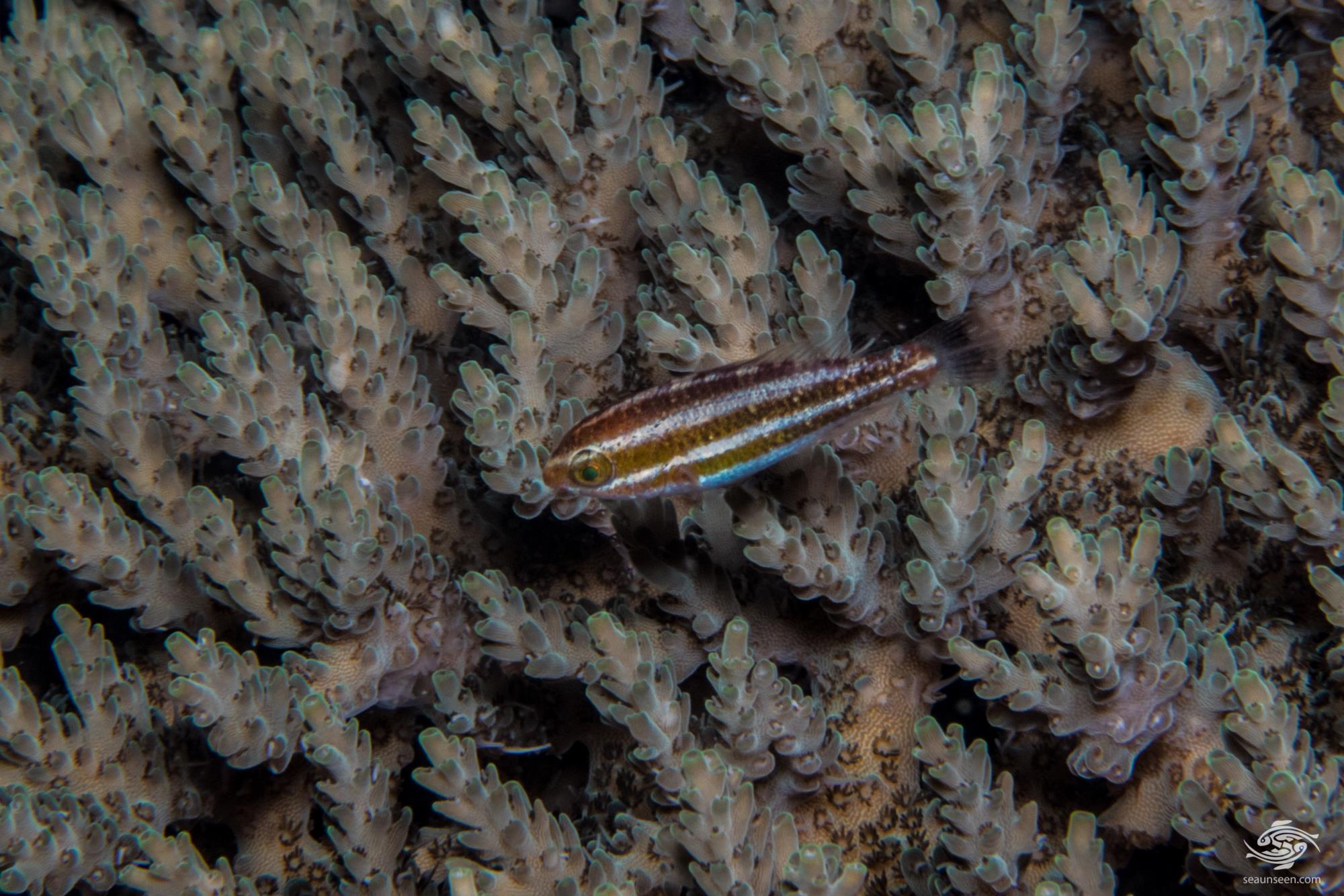 In Tanzania the small juveniles start out as above , being a white color with three darker brown stripes across the body. As they age so they darken and the mouth area starts going red which can be seen below. 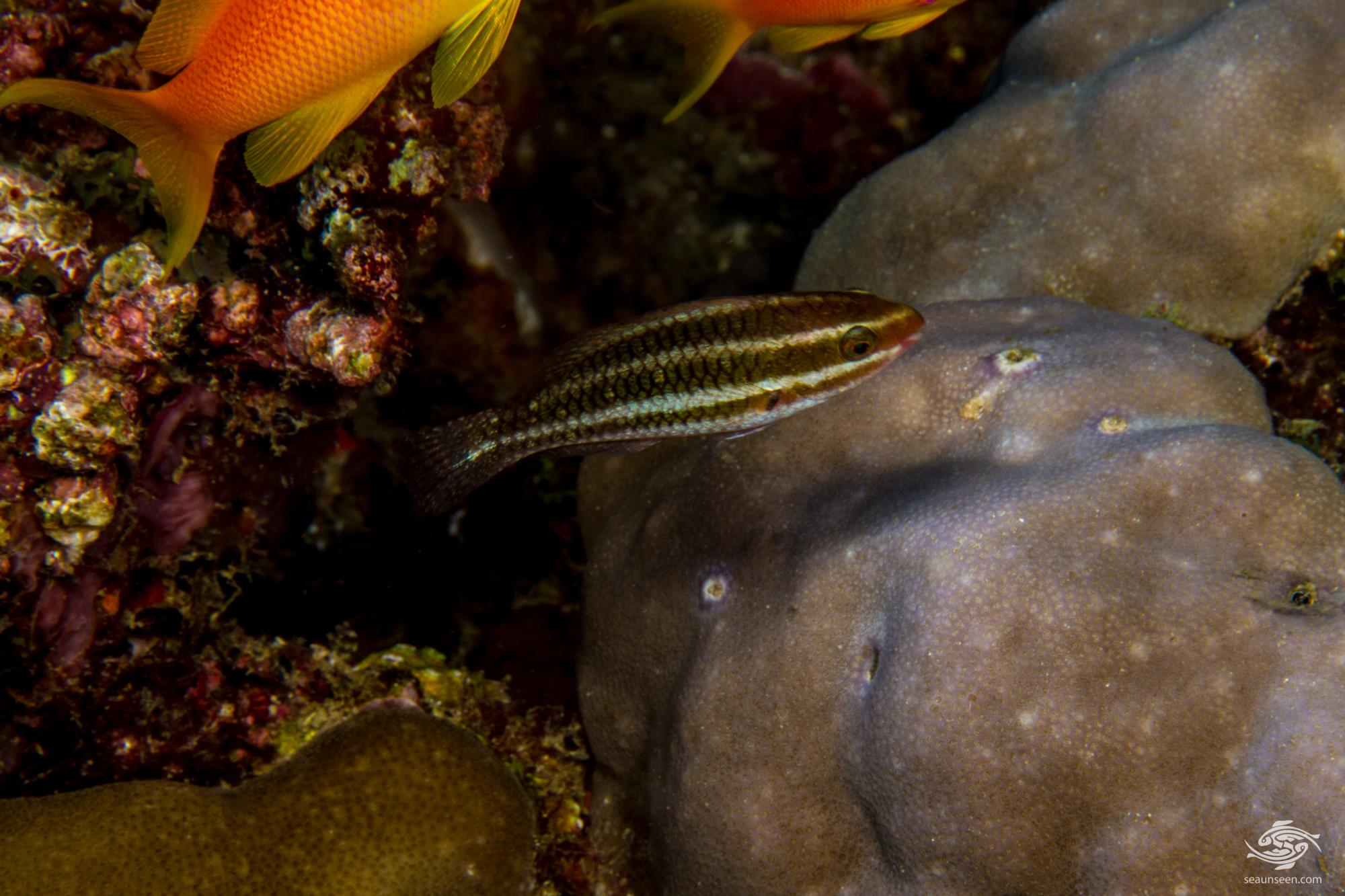 From this stage the body darkens and the lips go red as seen below.  The red extends from the facial area down onto the belly.  The scales are large and the upper body is a mix of green brown,  black and off white.  Ember Parrotfish- the caudal area thickens and the caudal fin is square. Note the eight white dots from the mid body to the caudal area. 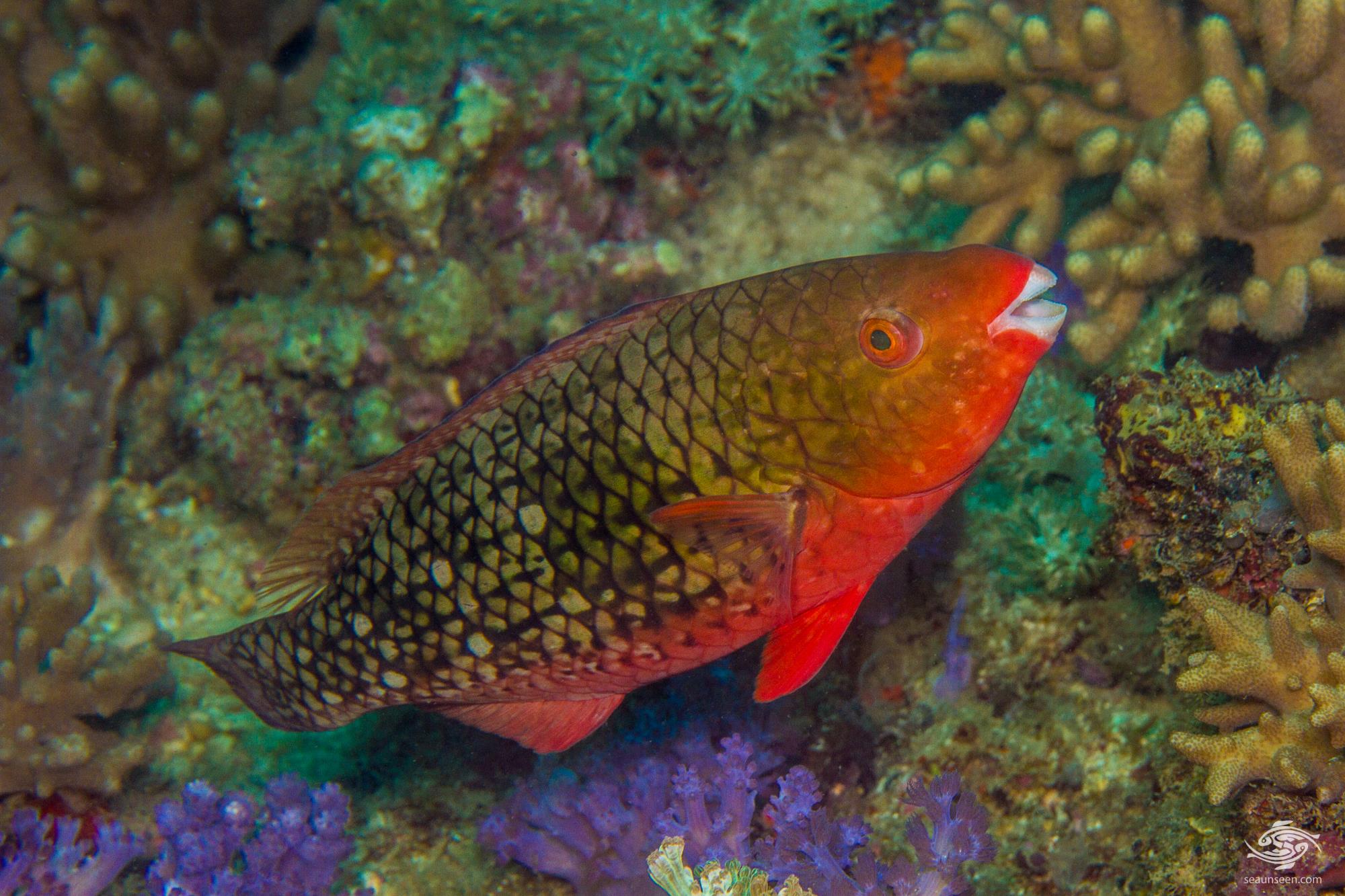 From this stage onwards at around 31 cm they become sexually mature and are Initial phase females. As they age so the head enlarges and changes shape, growing outwards forming a distinctive bump on the nose.  Note this specimen still has lines of white dots on the rear body. 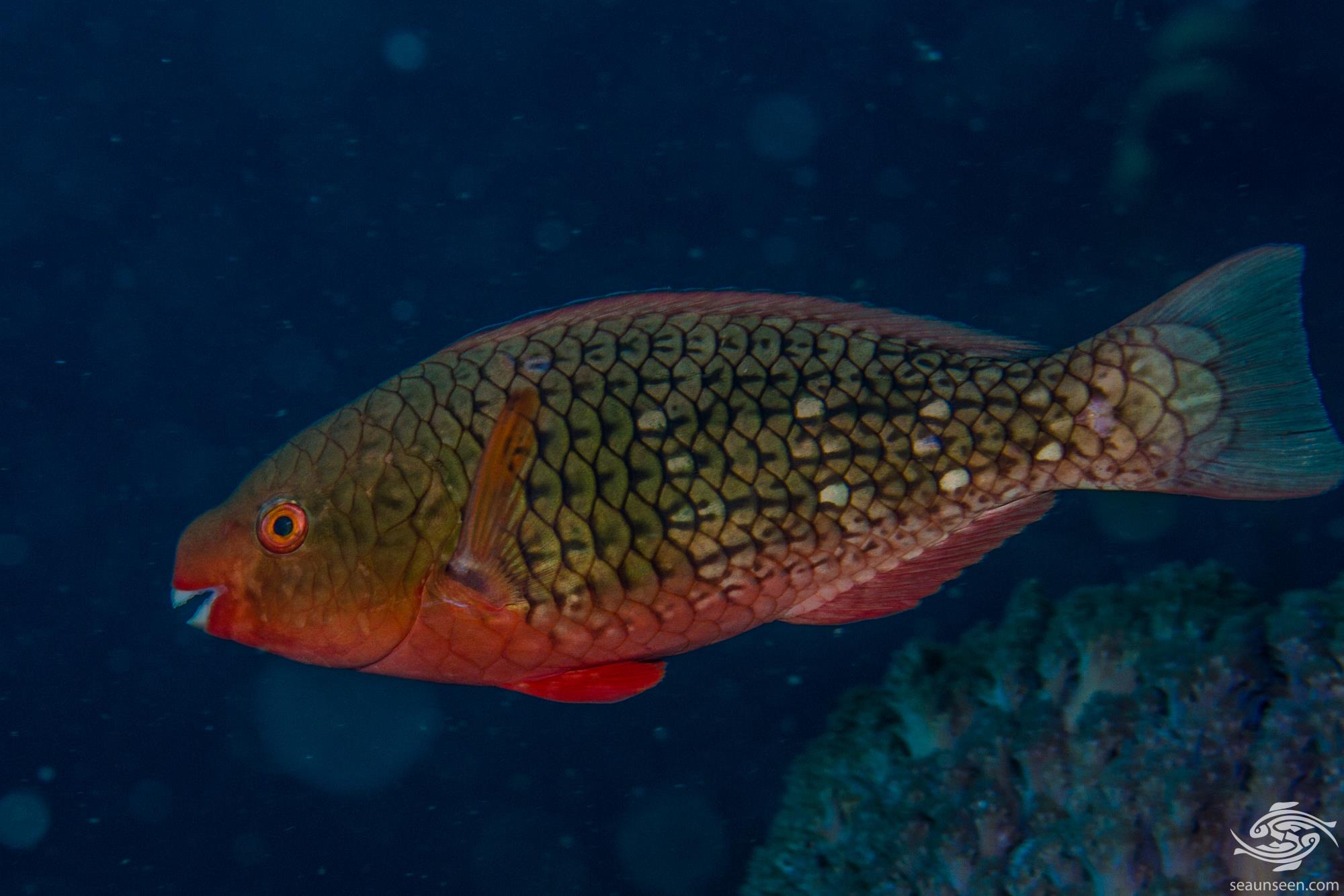 As they grow so the body darkens with the red becoming more prominent and the nose area enlarges as seen below. 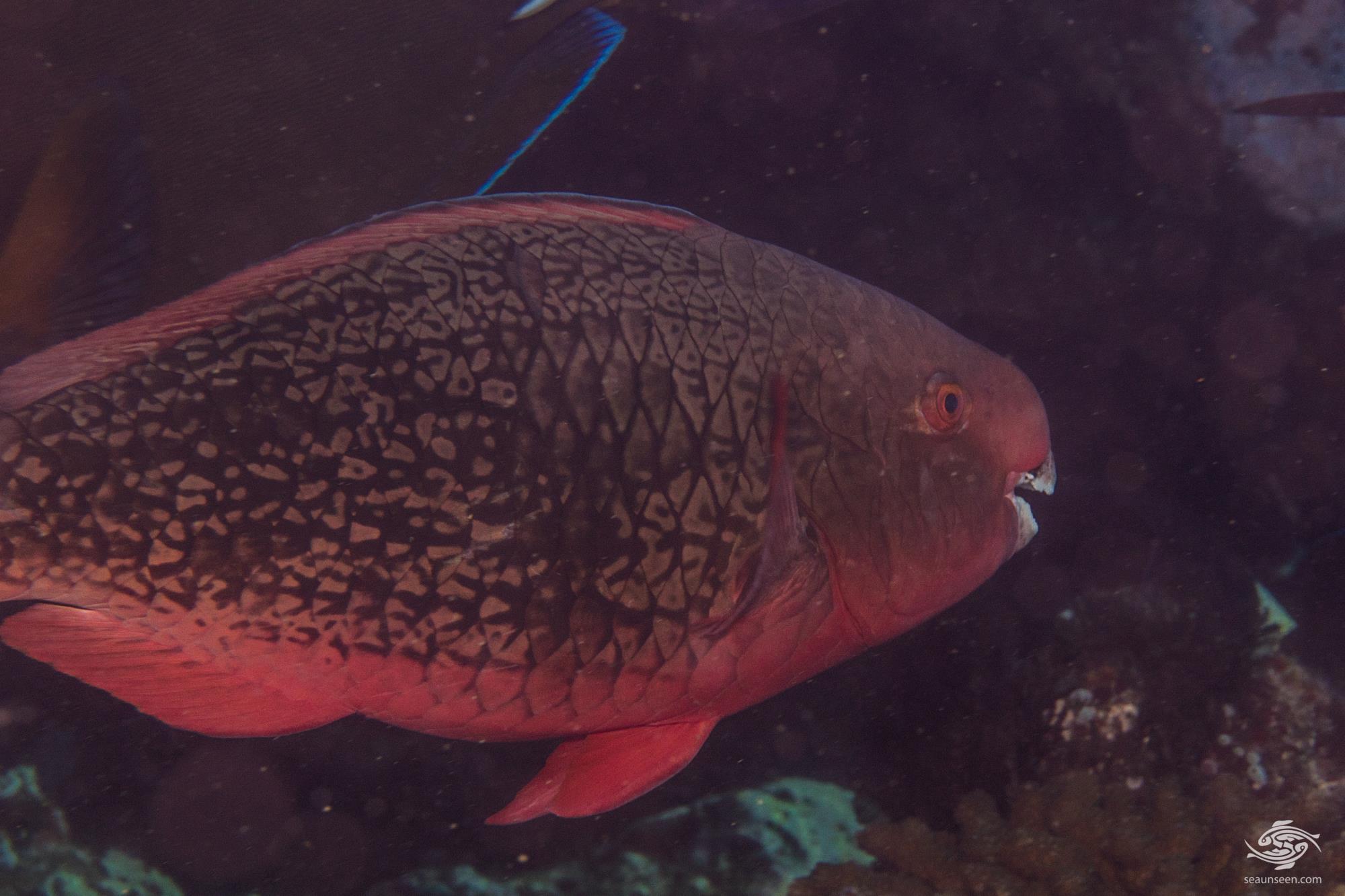 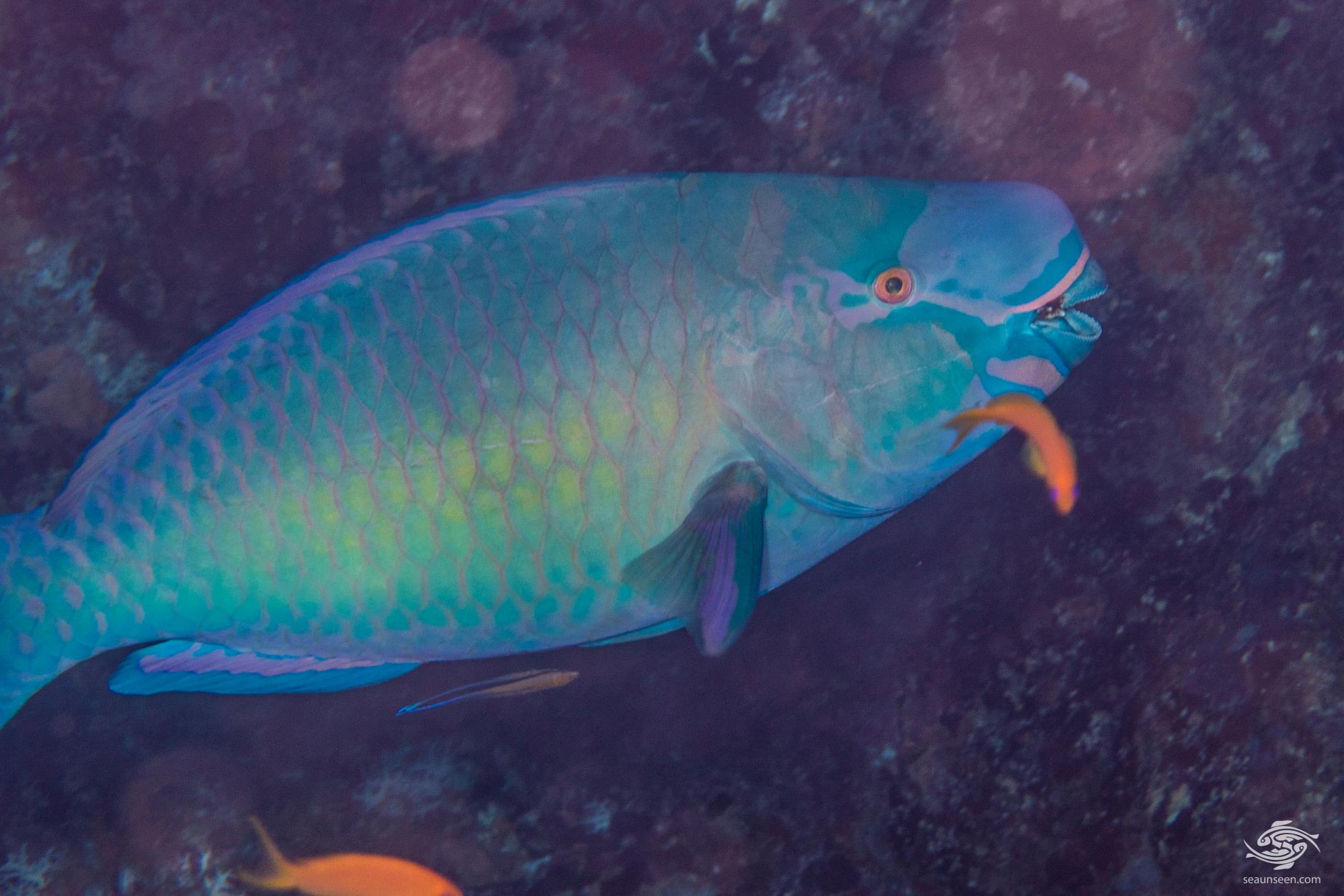 EMBER PARROTFISH IN THE WILD

As a juvenile the Ember parrotfish often feeds on the shallower reefs at around 10 to 15 meters with groups of Rabbitfish , Goatfish, Wrasse and smaller Surgeonfish.  They are not rare at this stage but neither are they common. Occasionally the juveniles are seen in small loose shoals.  As they mature so the larger fish seem to go to the deeper reefs and we only see the larger specimens from twenty meters downwards.

The females sometimes seem to be in small groups and there is often a male nearby. The deepest we have seen them is around 30 meters off Mafia Island, Tanzania.  Unusually at night we have seen larger specimens sleeping in the corals at around 12 to 15 meters but we never see them at these depths during the day.

The Ember Parrotfish is found across the Indian Ocean from East Africa and the Red Sea across into the Pacific as far south and east as the Great Barrier Reef excluding Rapa and the Austral Islands but including Hawaii.  They are found as far north as the Ryuku Islands south of Japan and east to the Gulf of California and the Galapagos Islands. 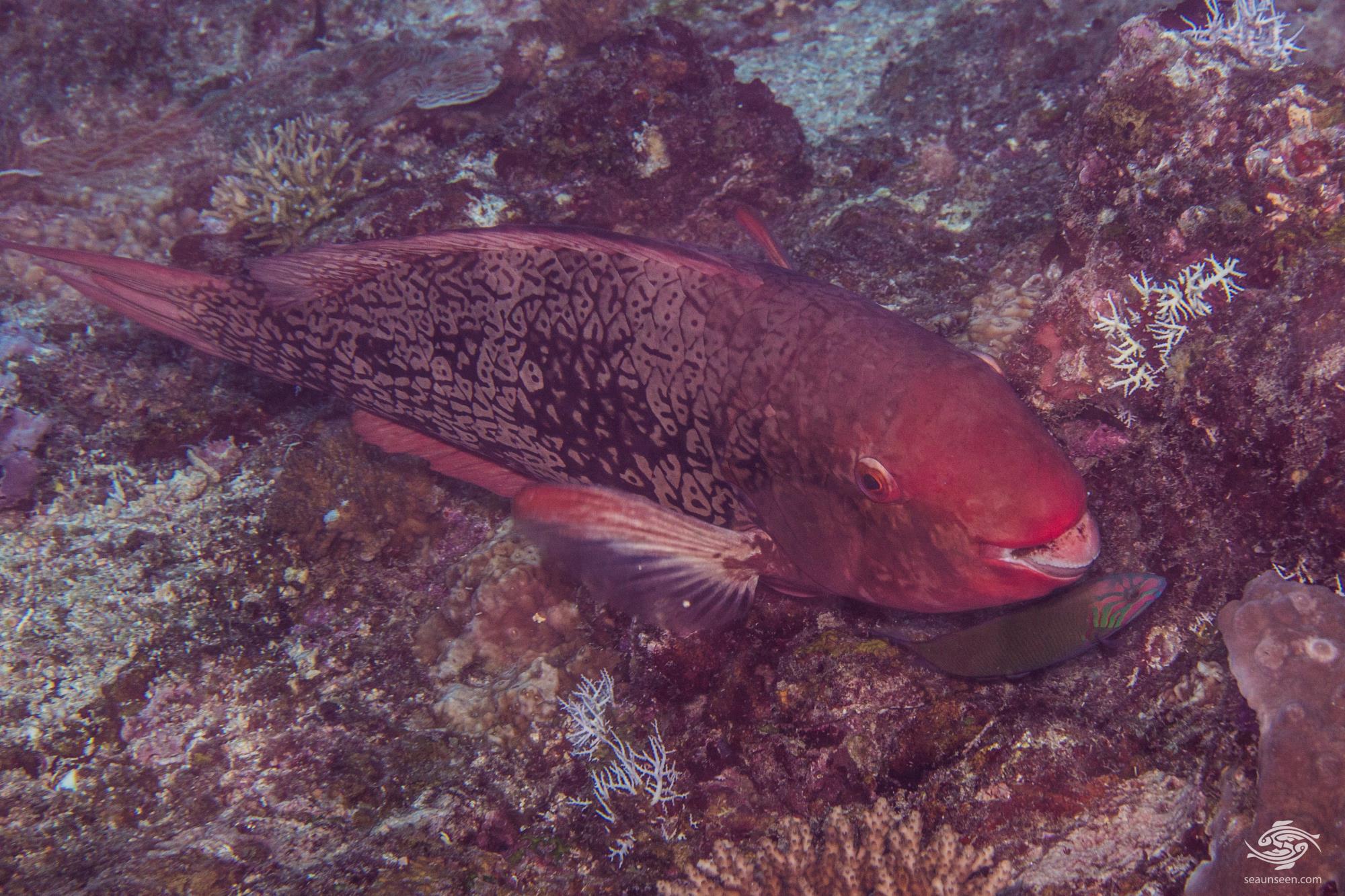 The Ember Parrotfish feed on a variety of  filamentous algae which is scraped off dead coral using their powerful beaks. These scrapings which are mainly comprised of inorganic matter are further ground down by bony teeth plates and then go into a long specialized alimentary canal where nutrients are extracted.  The inorganic matter is expelled as fine sand. 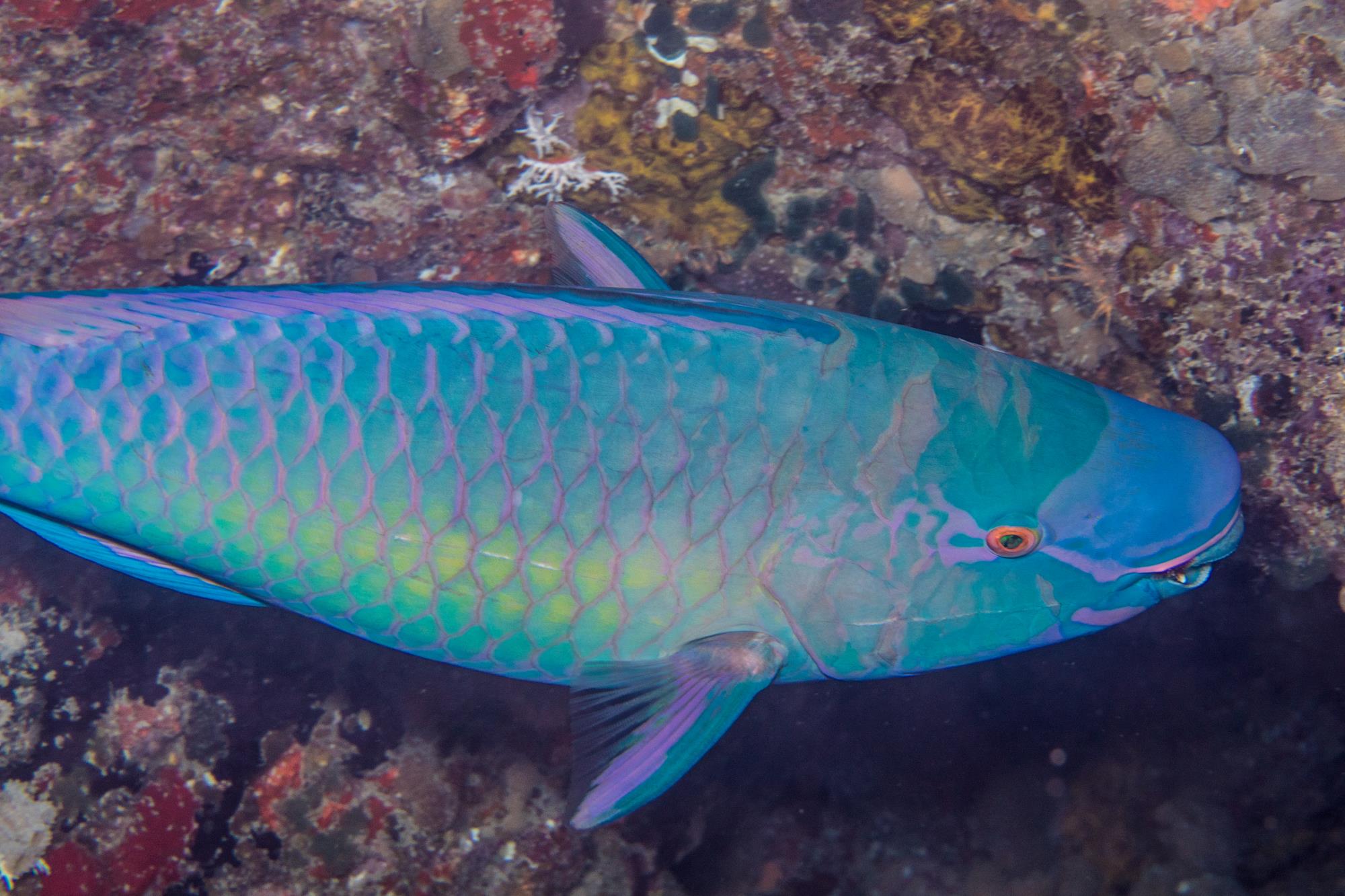 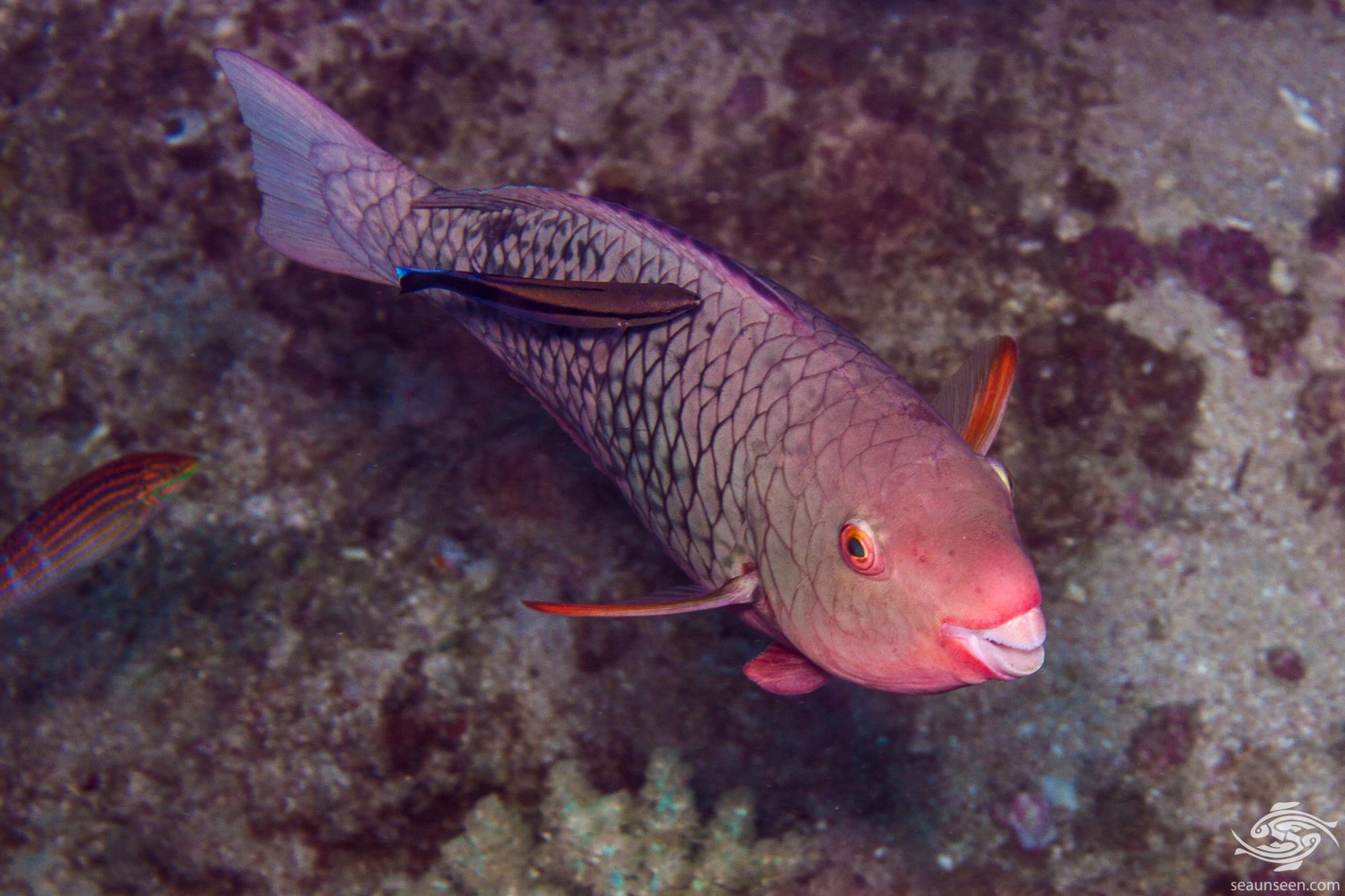 Ember Parrotfish are not commonly kept in aquariums although some public aquariums may occasionally keep them for public display. This is both a function of their size and the difficulty in providing them with food.