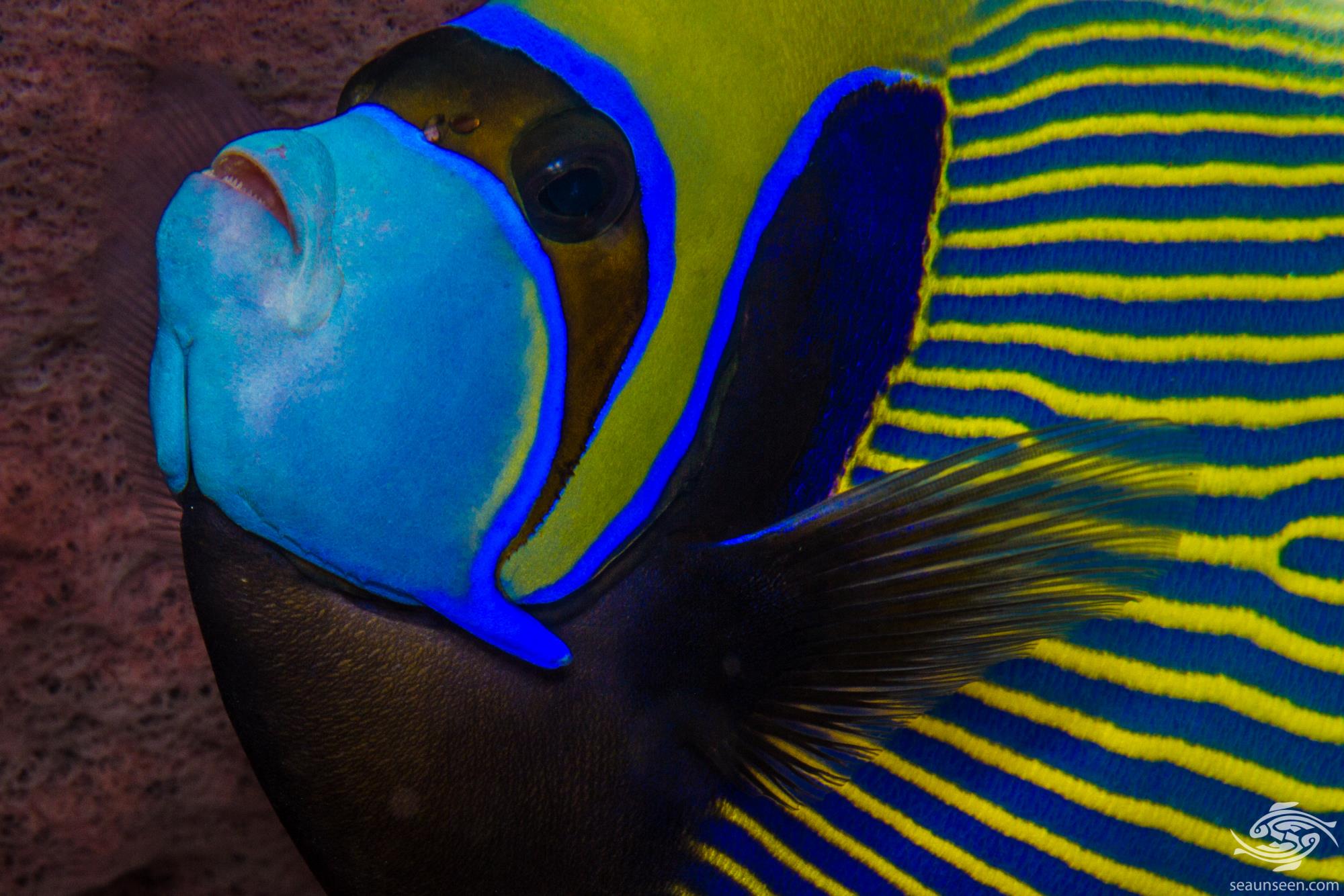 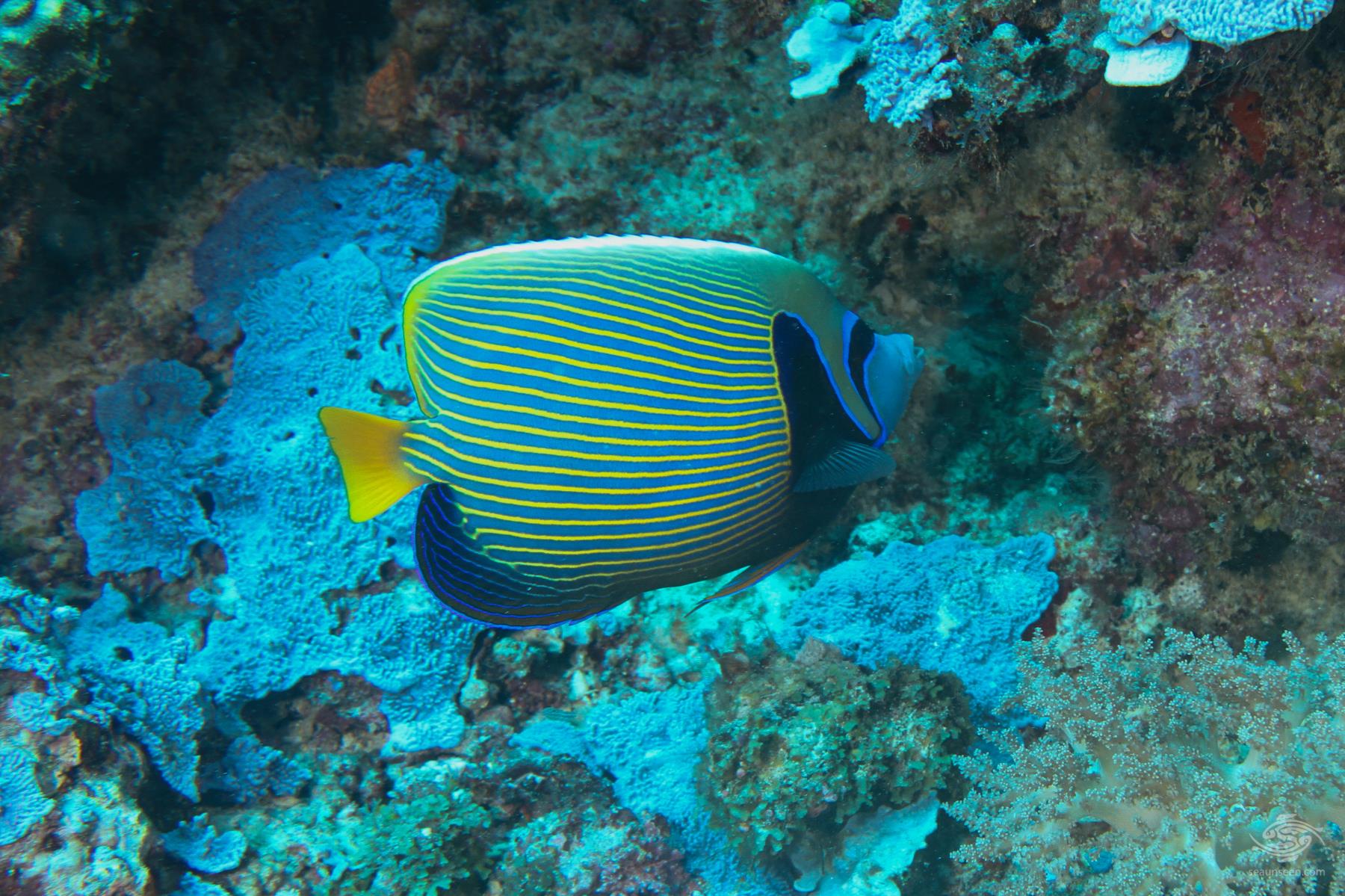 The The emperor angelfish Pomacanthus imperator is also known as the imperator. It certainly lives up to its name and is a stunning fish and the sight of one cruising the reef is likely to stay in ones memory for a long time.

Angelfishes are closely related to the butterfly fish, being distinguished from them by the large spine on the rear of their gill cover. The family obtains its name from the Latin “pom” meaning cover and “acanthus” meaning thorn. One common characteristic that the family has is that the young are dramatically different in color and pattern to the adults. 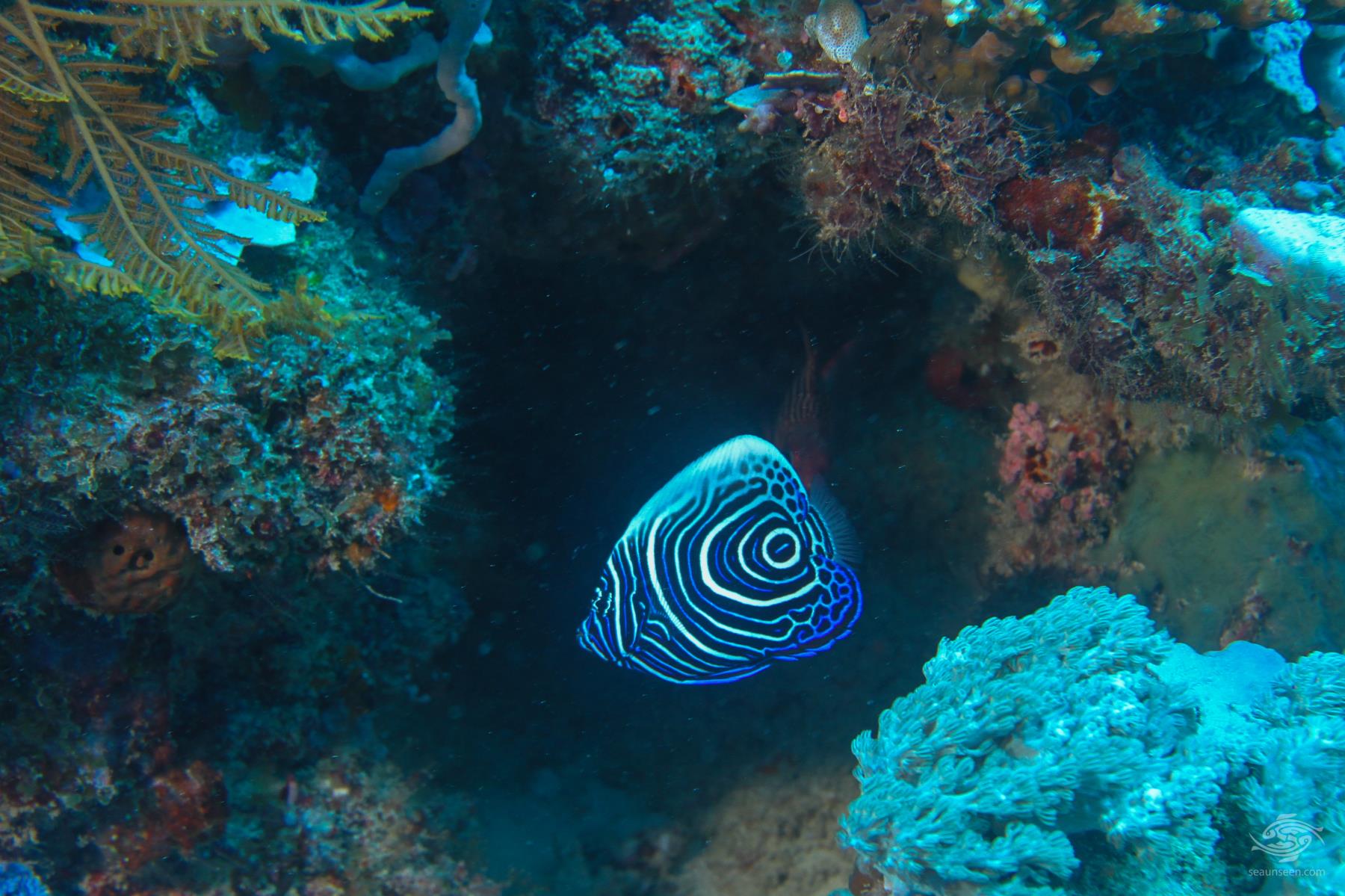 As a juvenile it is a stunning looking fish with dark blue, purple, black and white stripes in a crescent shape at the front of the body. These stripes merge into circles towards the tail. Adults have a light blue background and yellow horizontal stripes across the body behind the pectoral fin. The caudal fin is orange and the fore section of the body is a light blue with a mask across the eyes ringed with a darker blue line .

Masks can vary in color from dark brown to black. Alongside the pectoral is a curved dark blue to black vertical mark ringed with a yellow line. The anal fin is a bright blue color with black stripes. During the cross over period from juvenile to adult is probably when the Emperor can be at its most striking. The blue and yellow lines develop in patterns first before the lines straighten in the full fledged adult. This can be seen in the image below. Emperor Angelfish grow to a size of twenty five inches and they are one of the larger angelfish. 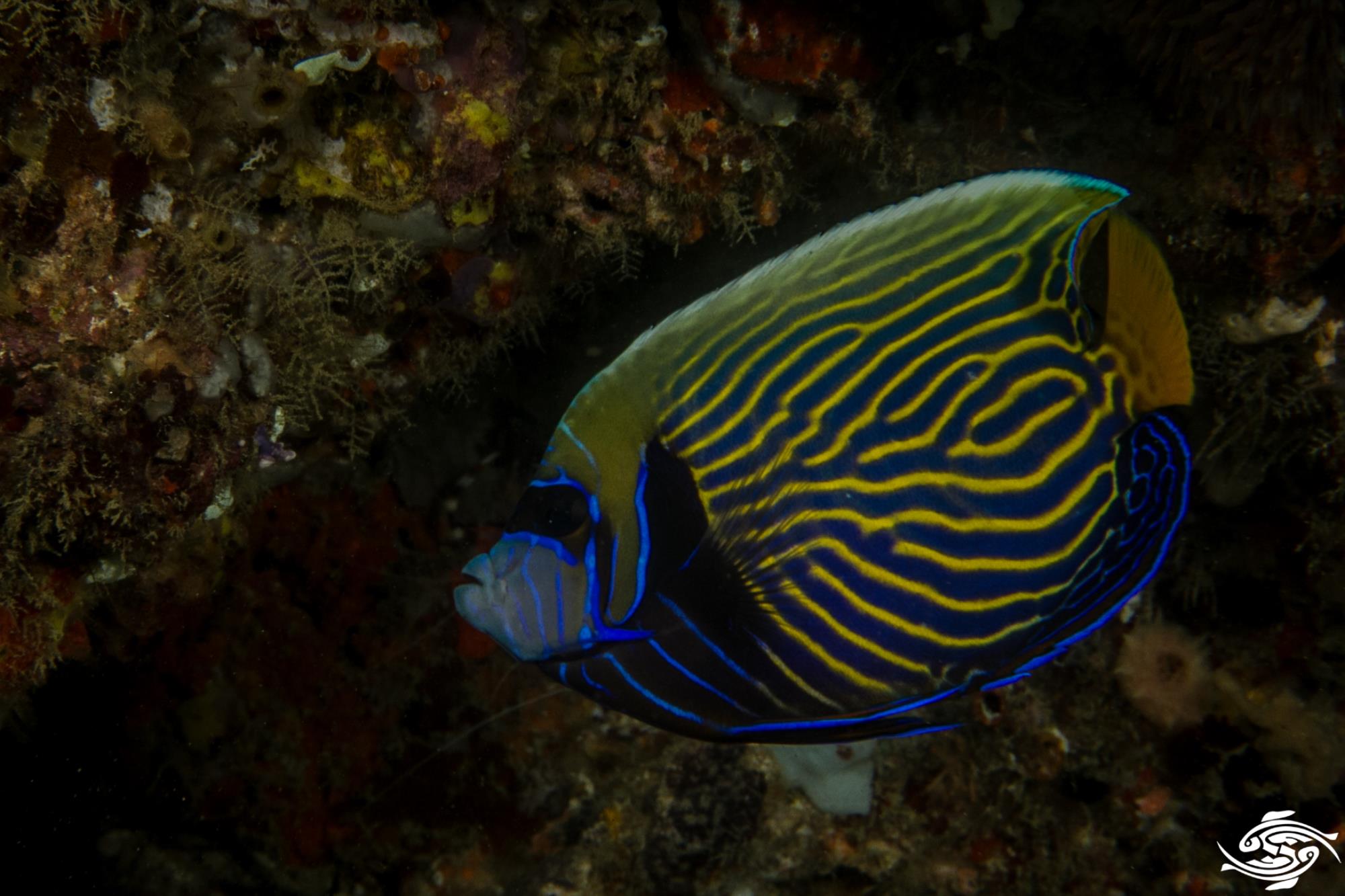 If you are scuba diving and approach an adult emperor angelfish slowly they will go into a hole or hide under an overhang. But if you stick around for a few minutes and make no fast movements, they will generally come out and will often swim around you which is great for taking photographs of them. When they feel threatened they often make grunting noises and if you make a similar noise back this seems to excite them.

The juveniles on the other hand are much harder to approach as they seldom stray out of cover and are always under a ledge or in a hole. They often swim sideways or upside down against the roof of the overhang. Males are highly territorial with a large range which they protect along with the females in their range. 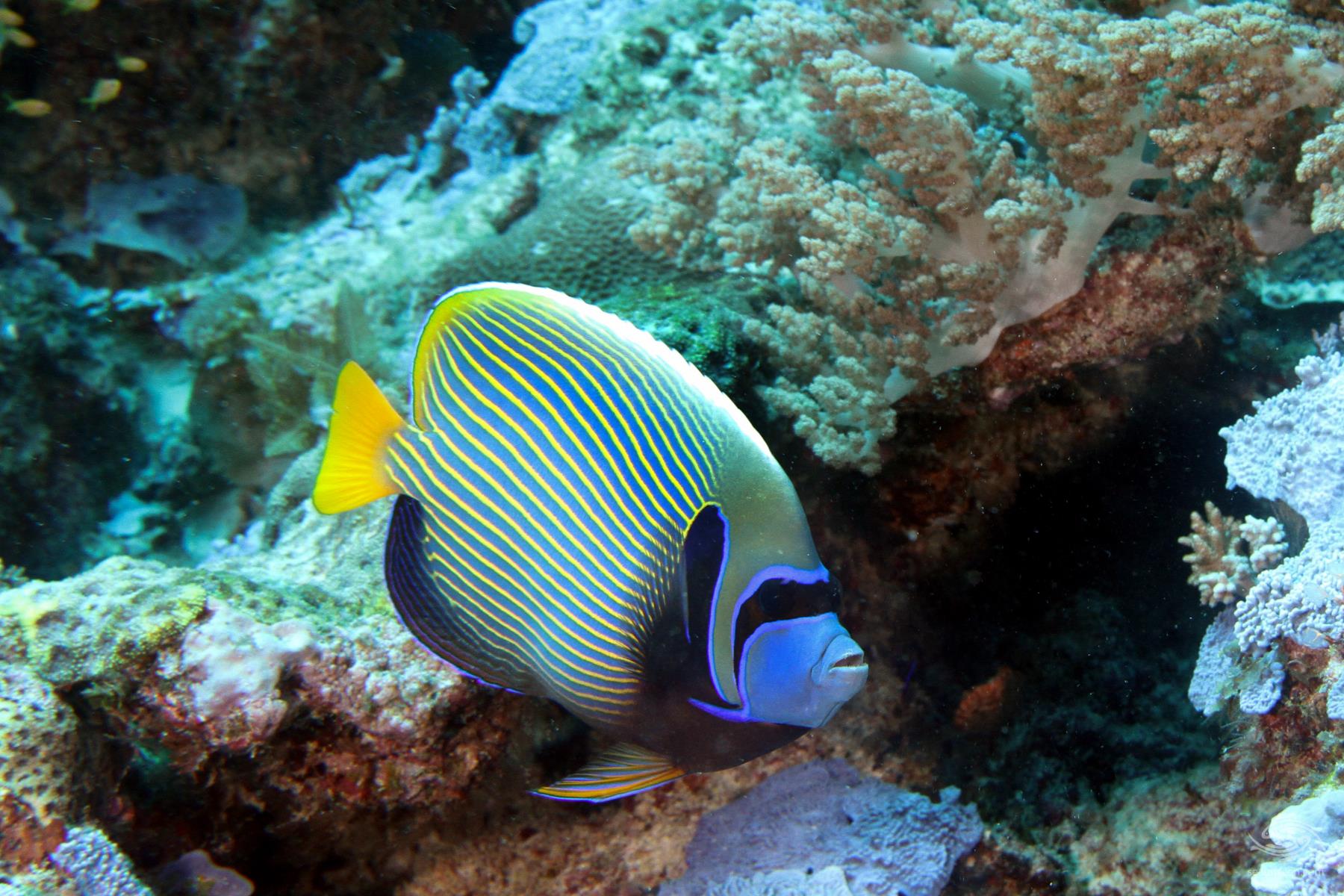 The Emperor Angel Fish is found across the Indo Pacific area from South Africa to the Red Sea and eastwards to Australasia. They inhabit coral and rocky reefs to a depth of 100 meters. 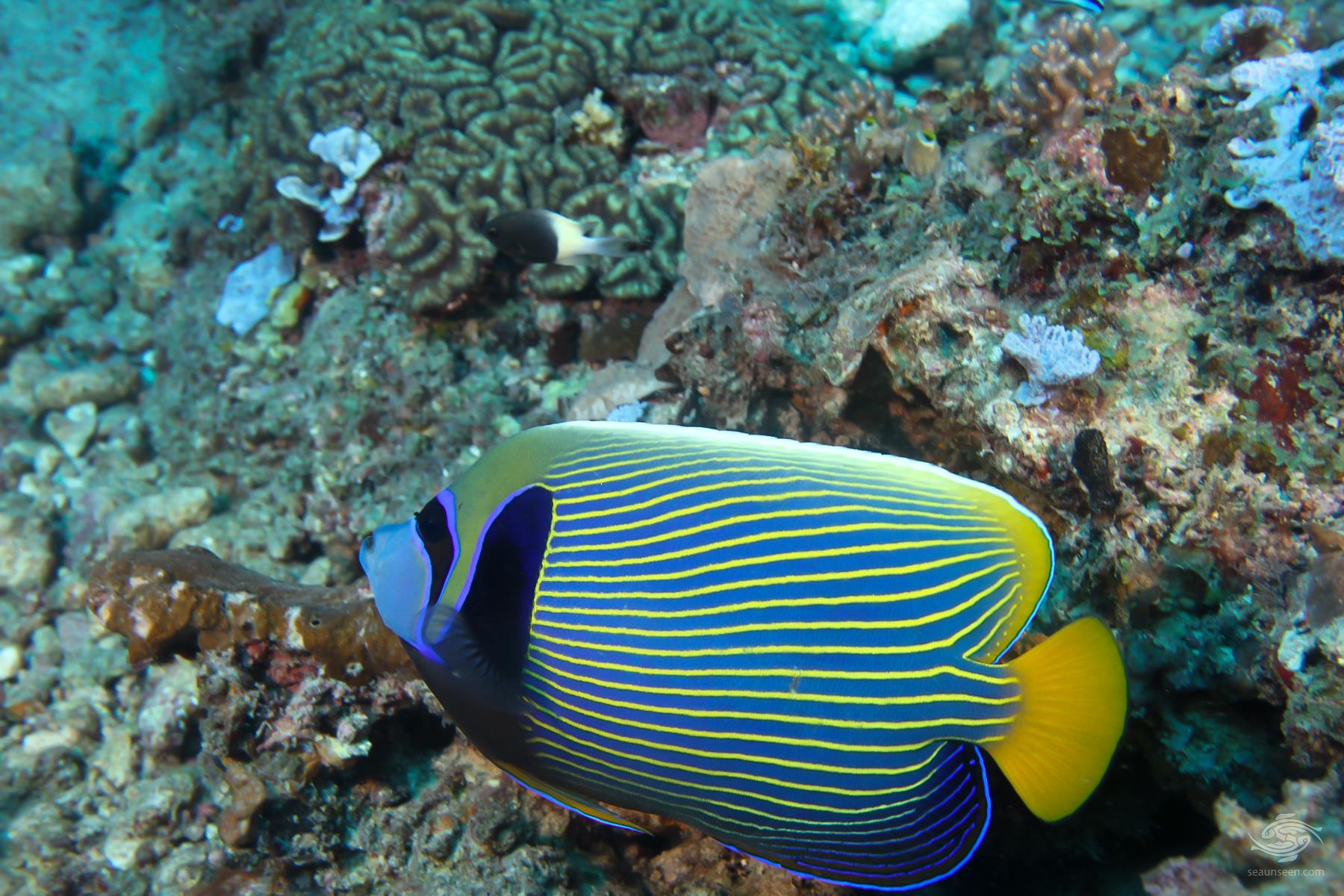 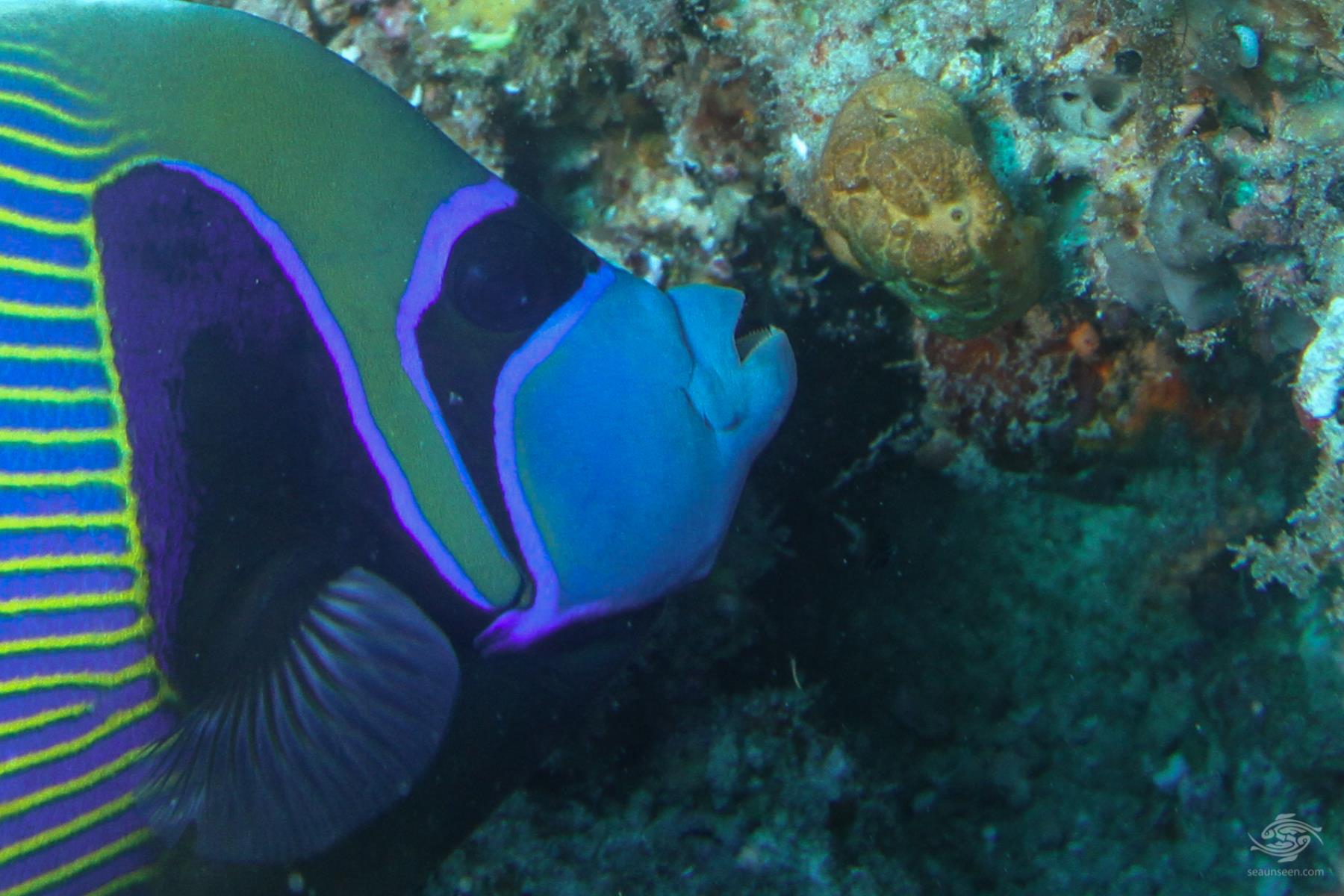 The emperor angelfish spawns at dusk during certain times of the year depending on location and the female angelfish releases hundreds of eggs which are fertilised by the male. Mating is initiated by the male displaying to the female. Fertilized eggs are released into the water table where they float until they are ready to hatch.

Emperor angelfish will feed on large stony coral polyps, anemones and zoanthids as well as some soft corals and are not really suitable for true reef tanks. They can be semi aggressive in tanks and it is best not to have more than one in a tank unless they are a mated pair. It may also be a good idea to put this fish into the tank last.

Because of the spine on the gill cover one has to be careful when netting these fish as the spine can become hooked in the net. 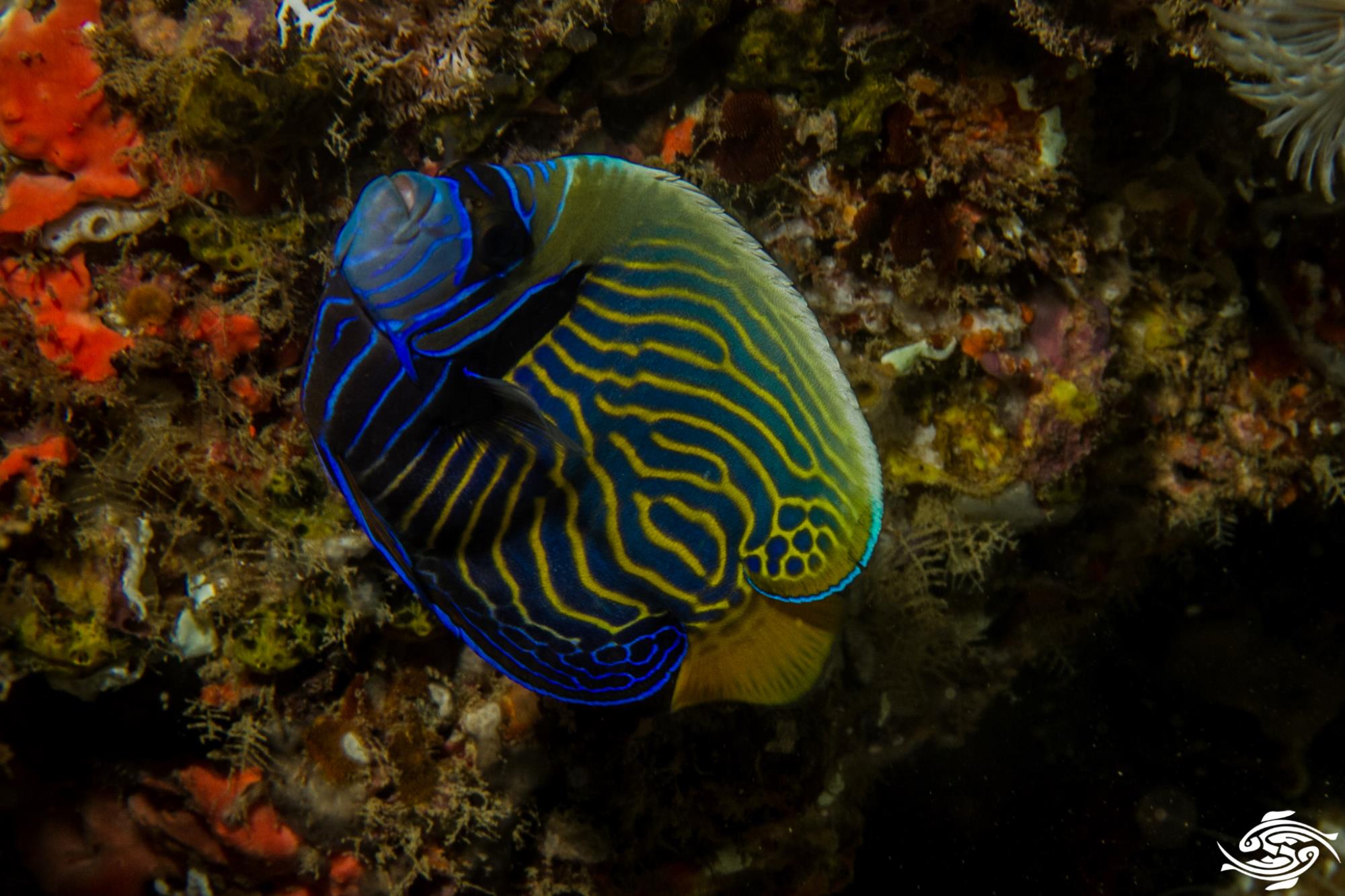 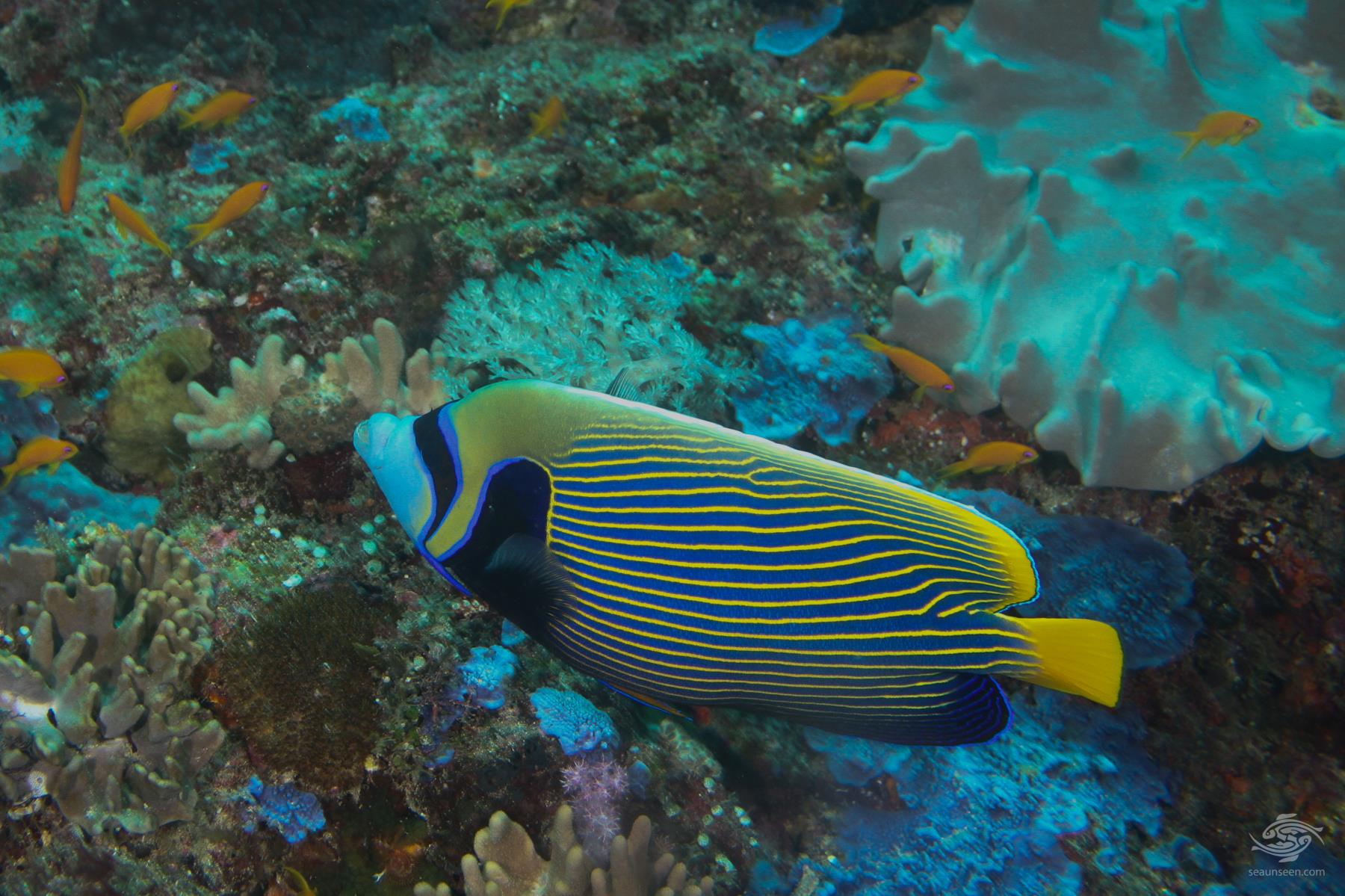