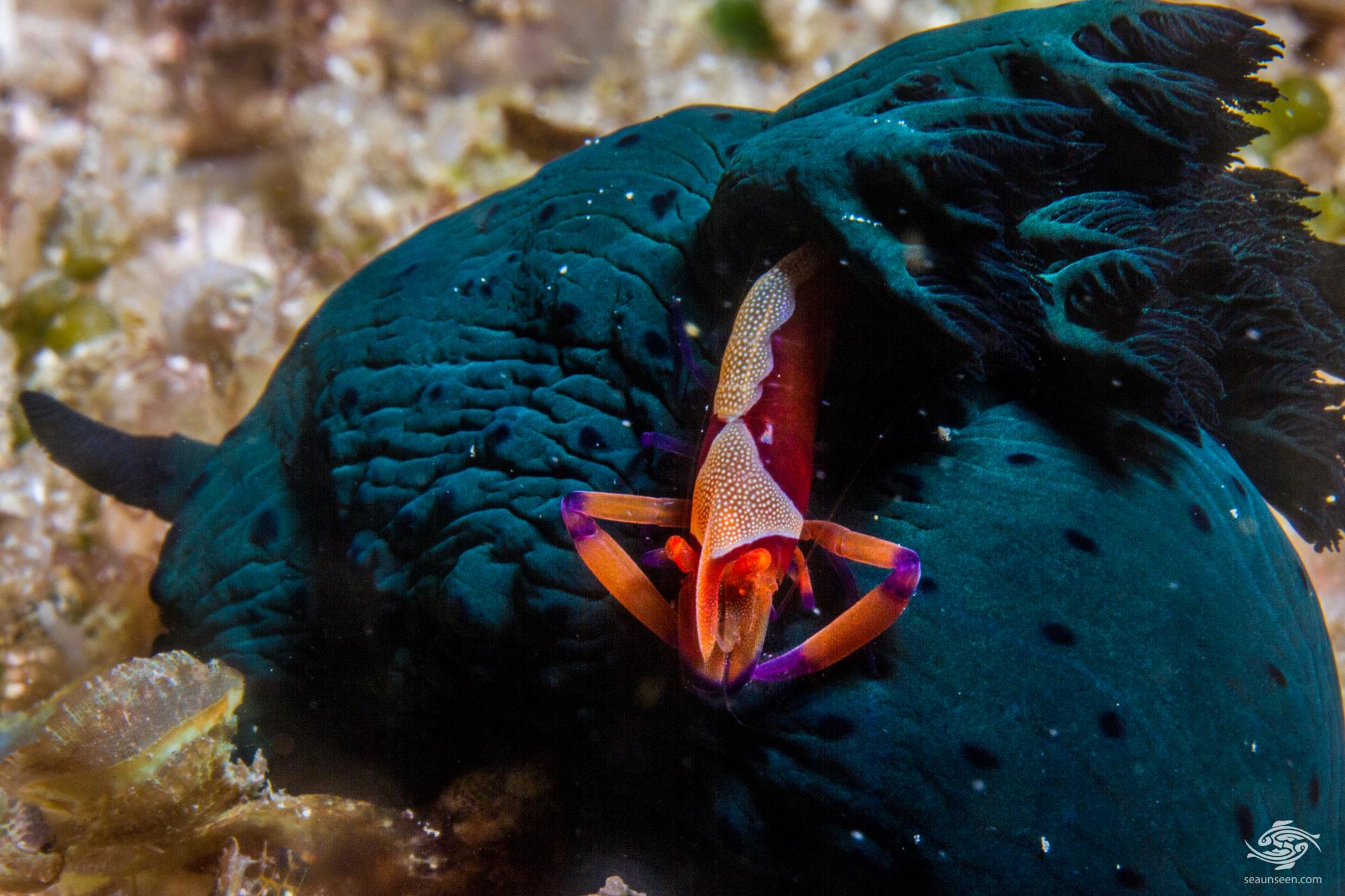 The Emperor shrimp (Periclimenes imperator) is one of the more vividly colored shrimp around.  They form what are termed commensal relationships with various species of nudibranch and sea cucumbers (holothurians) but the adults are most commonly seen on the Spanish Dancer (Hexabranchus sanguineus) nudibranch.

Because they are quite shy they are not always the easiest shrimp around to photograph and are comparatively shy often hiding under their host. They were first described by Bruce in 1967 from specimens obtained from Hexabranchus sanguineus in Zanzibar and Mozambique. 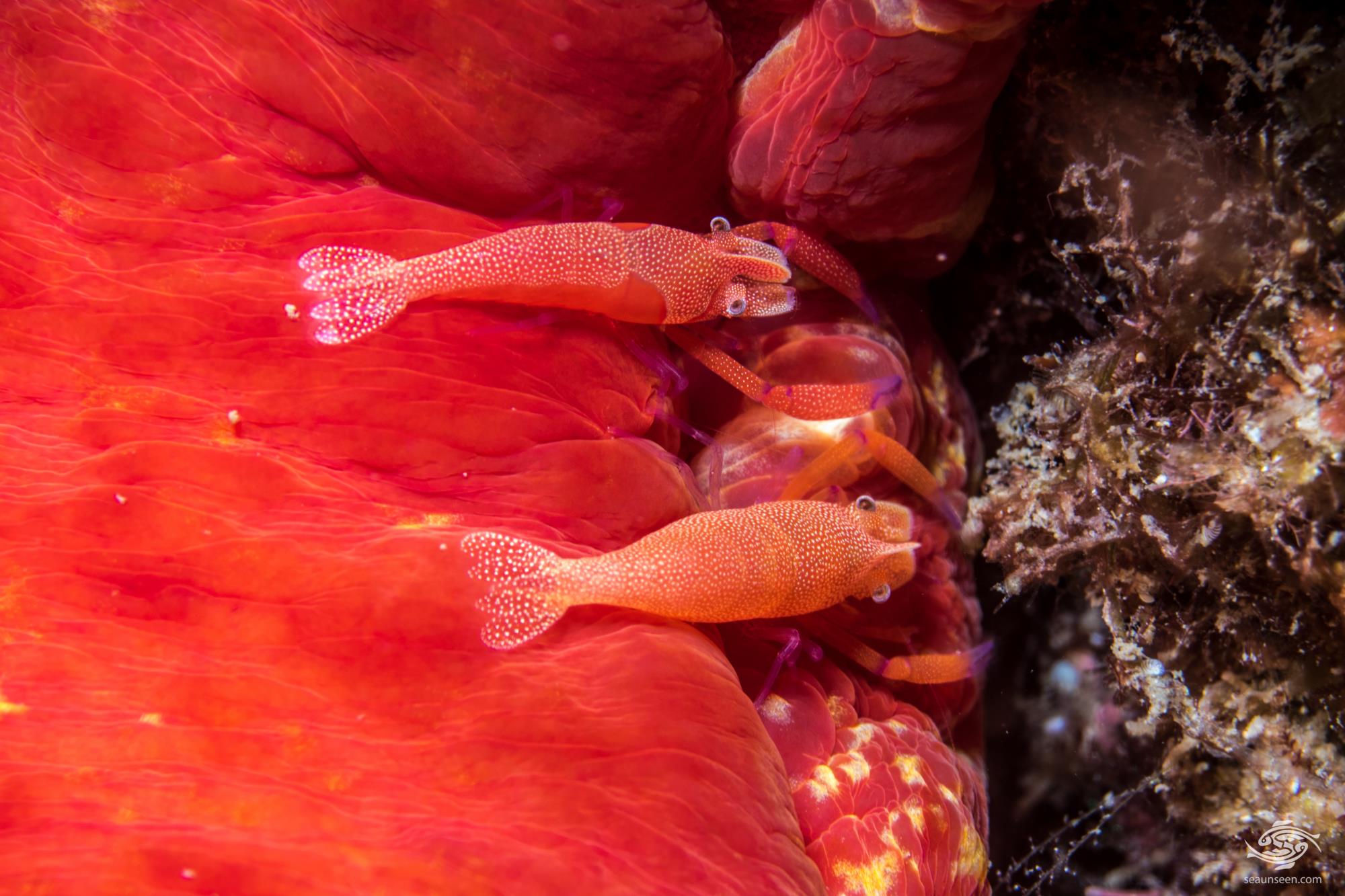 The Emperor shrimp has a maximum body length of about 25 mm. Although their colors vary slightly, the usual base body color is red with white on the carapace and tail. Some specimens however have a more orange red colour and others are completely covered in white dots. Very rarely one may find a yellow specimen as seen lower in the post.

The claws and legs also vary substantially between translucent, orange and red to being covered in small white dots.  The tips of the claws are generally purple as are the elbows. There are three sets of walking legs and a set of legs with small pincers known as chelipeds. 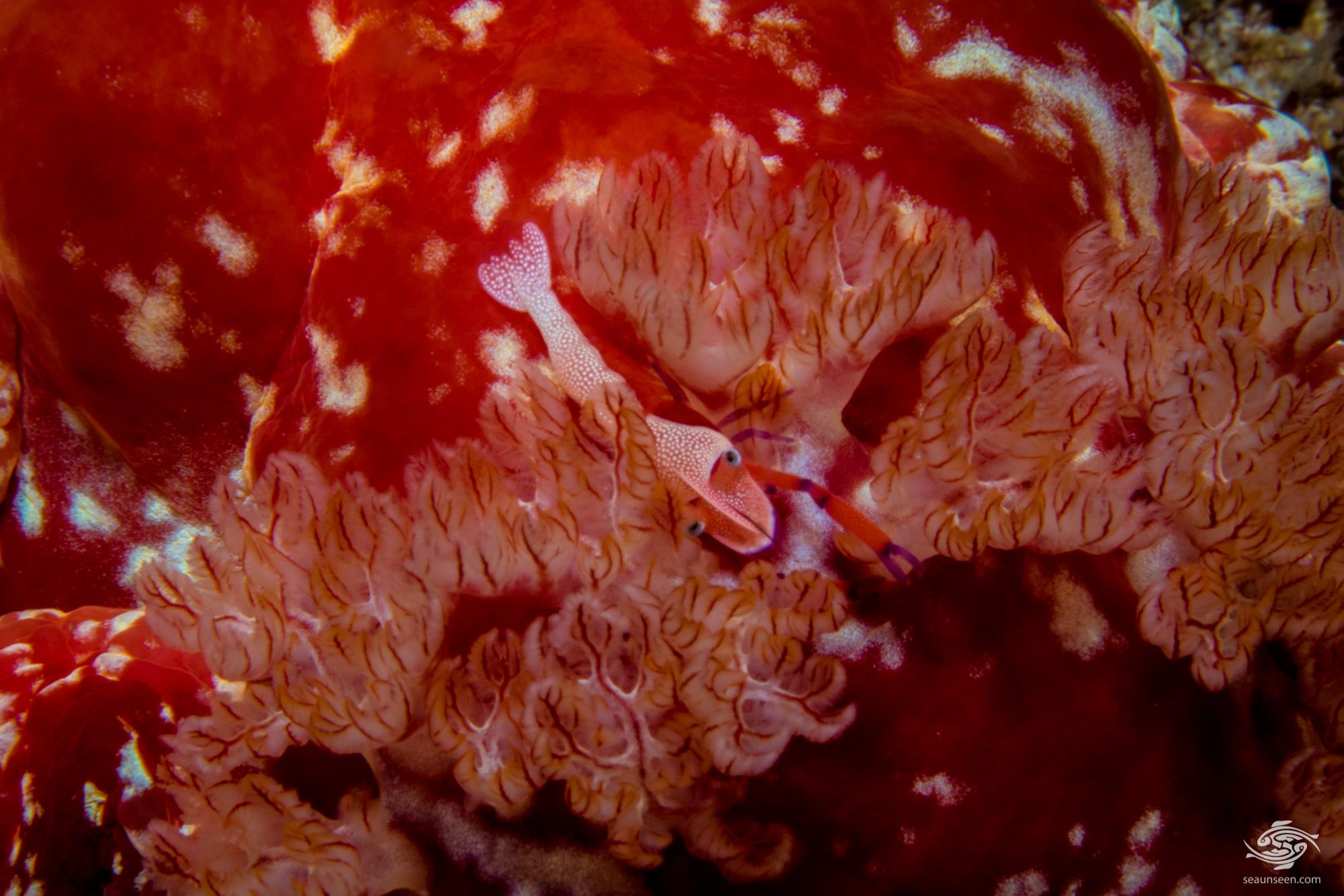 EMPEROR SHRIMP IN THE WILD

The most common place that one finds the Emperor Shrimp is on the Spanish Dancer nudibranch.  Generally there will be a pair on each specimen, but they often hide under the nudibranch or in the gills. One often has to look very carefully to find them and being of a similar color to most Spanish Dancers, they can be very difficult to spot. On occasion they are found on other species of nudibranch but this is not common.

They are also found on some species of sea cucumber (holothurians) and are usually on the sides or low on the body making it easier for them to hide under them.  Their relationship with their hosts is known as a commensal relationship. The shrimp benefit from the relationship by obtaining protection from their hosts which are toxic and although the host obtains no known benefit neither are they harmed. That said , their relationship is certainly more complex than that and the term commensal is a bit of a misnomer. 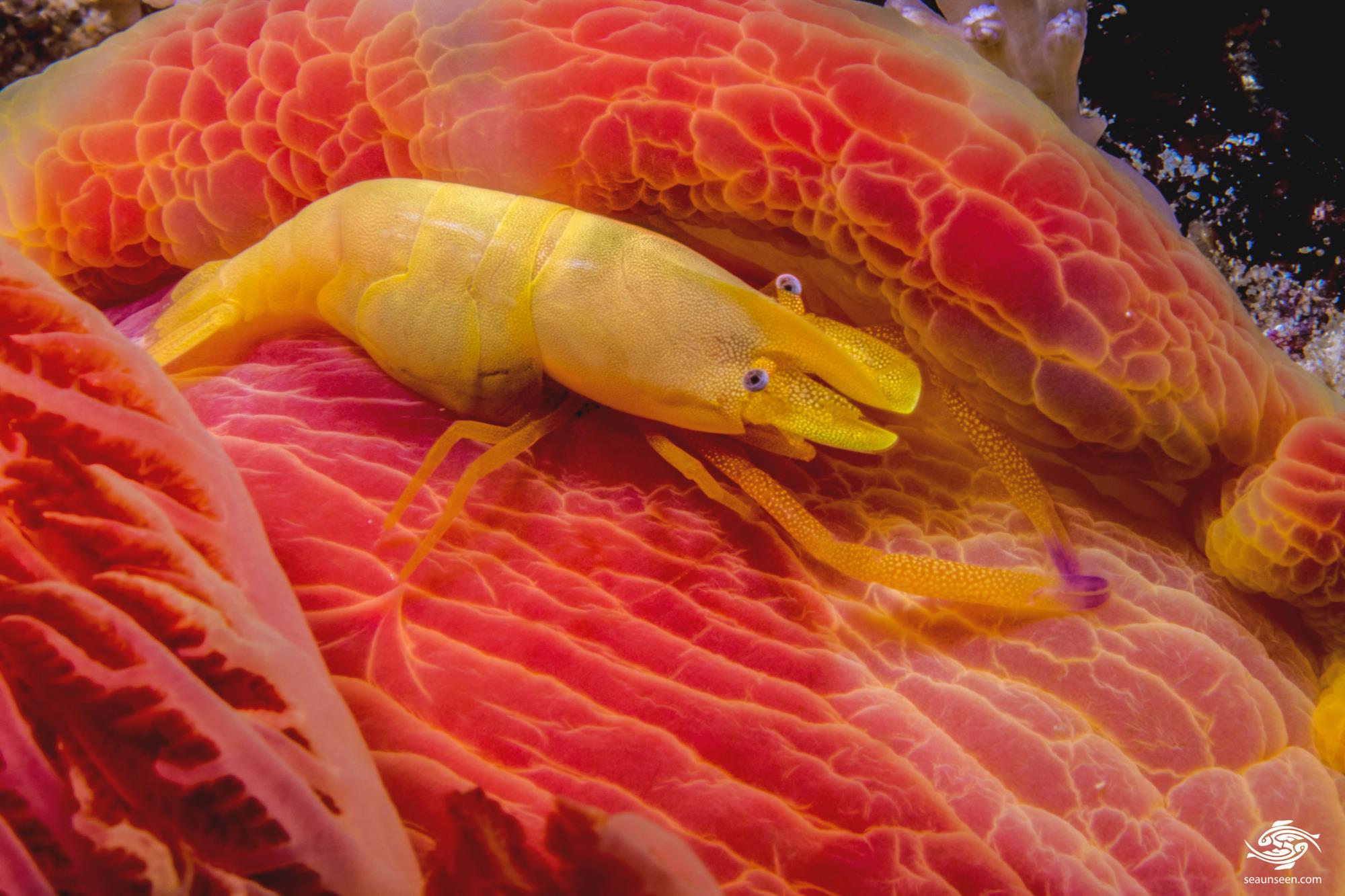 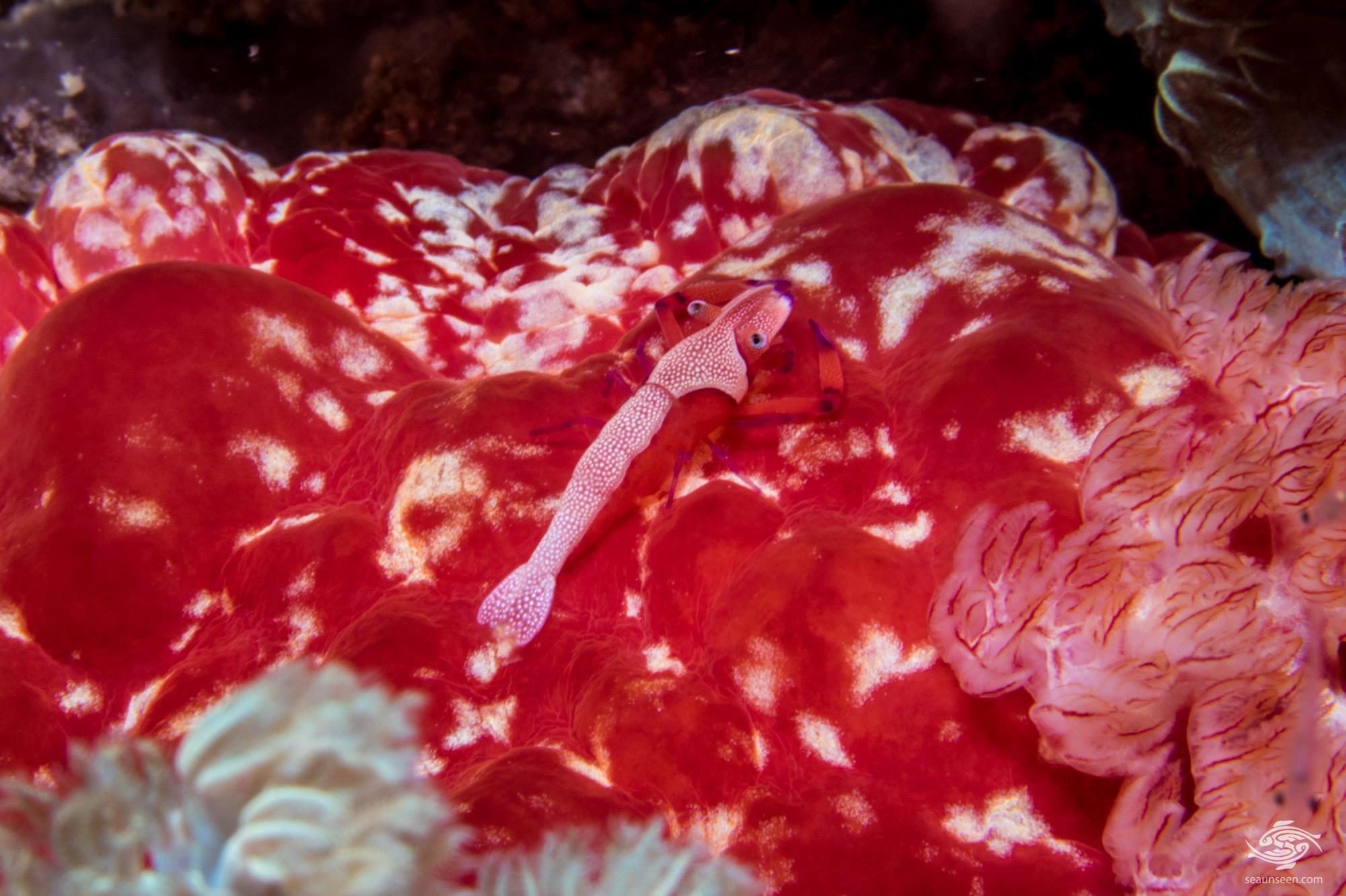 The Emperor shrimp have a wide distribution and are found across the tropical Indian and Pacific oceans. In Tanzania we have seen them from 2 meters ( small specimens on sea cucumbers) to 41 meters in depth on Hexabranchus sanguineus. 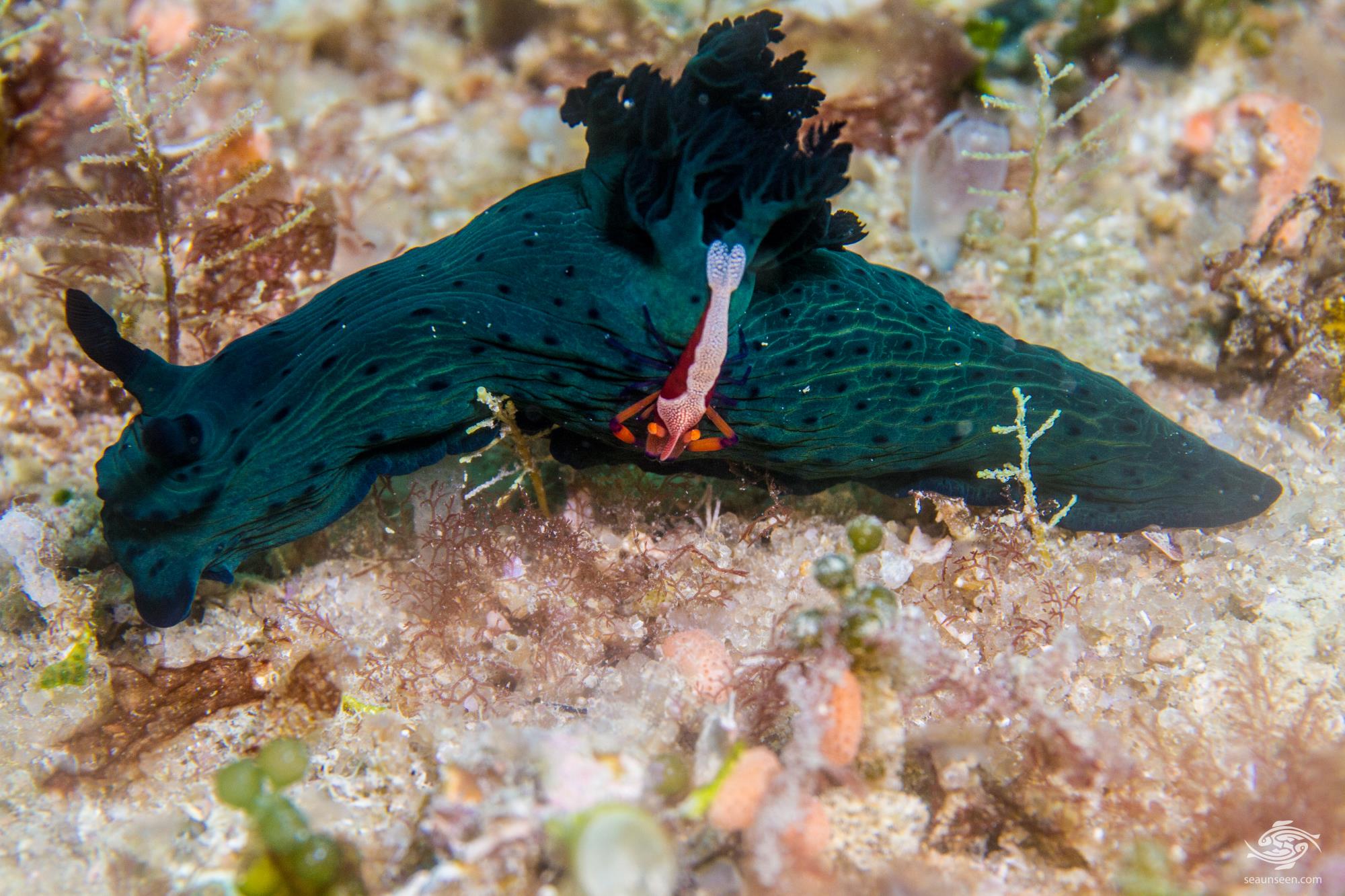 The Emperor shrimp feed on organic matter and small marine organisms that are disturbed and adhere to the mucus on their host as their host moves. They have also been documented eating parasitic organisms on their host, making their relationship with the host theoretically more of a mutualistic relationship.

However to offset this they have also been documented eating eggs from their sea cucumber hosts which is parasitic behaviour. Given their size they are unlikely to do much damage to the hosts reproductive capabilities but sometimes relationships underwater are complex and difficult to define. 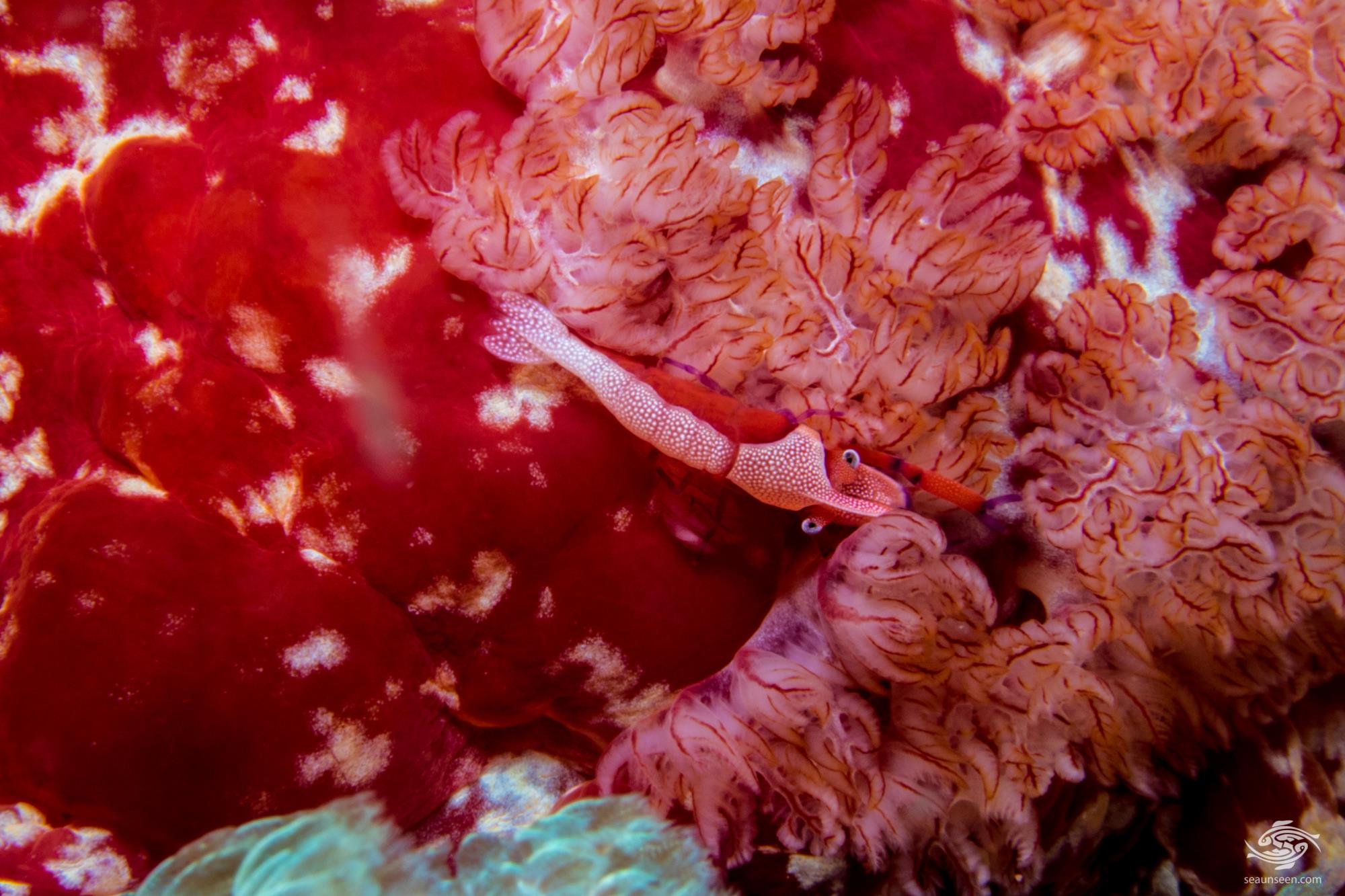 Very little seems known of their mating behavior but in other Periclimenes species the female is slightly larger than the male. We have observed many pairs on Hexabranchus sanguineus and they do not appear to be aggressive towards each other so one assumes they are mated pairs.  Bruce and others have observed specimens chasing newcomers off of their host and from this one can infer territorial behavior.  In all probability the mating takes place by indirect sperm transfer . 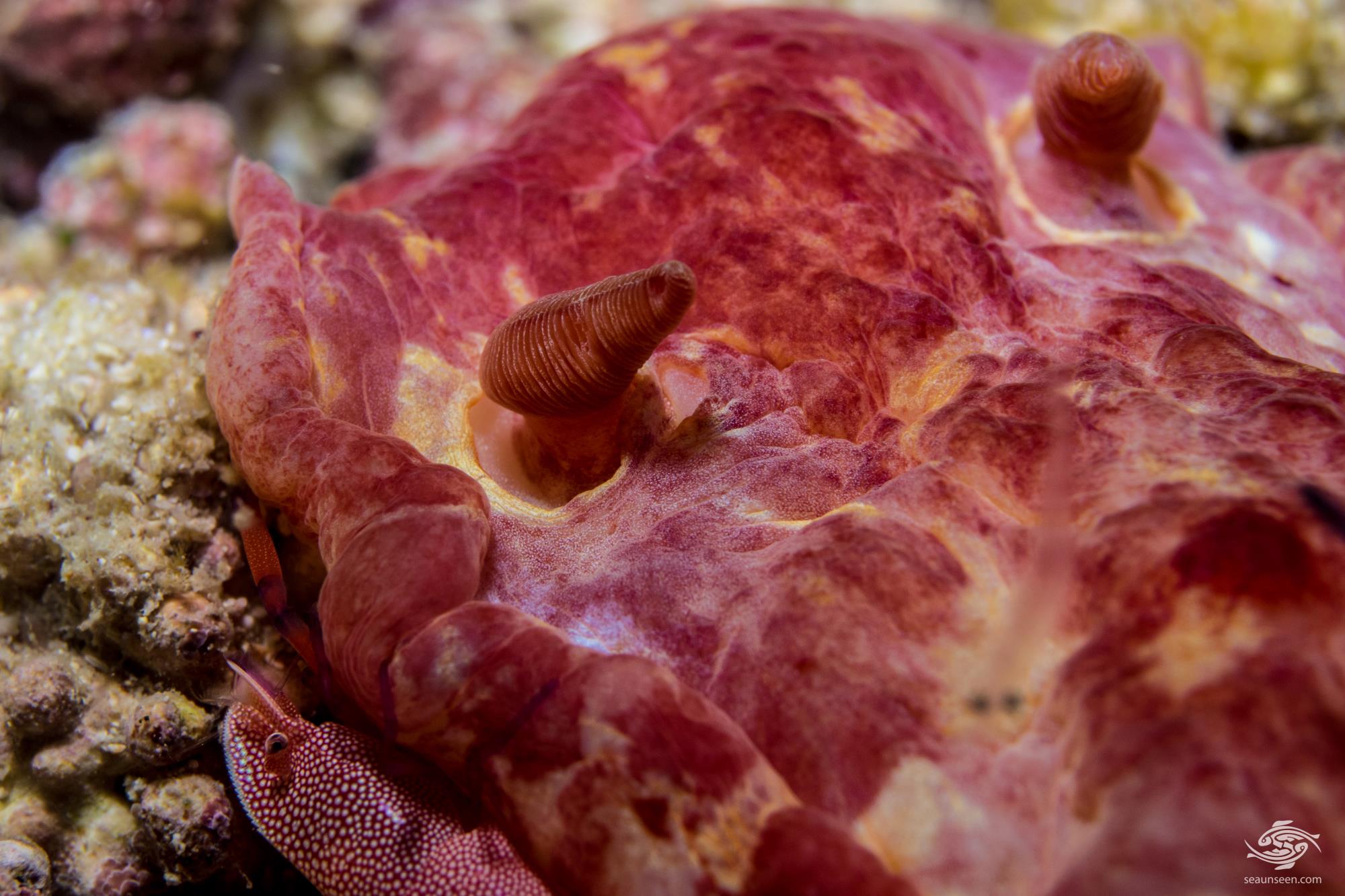 Emperor shrimp are kept by some aquarists, but given that it is almost impossible to keep a nudibranch in a tank because of their diet, the larger specimens would certainly be deprived of their preferred host.