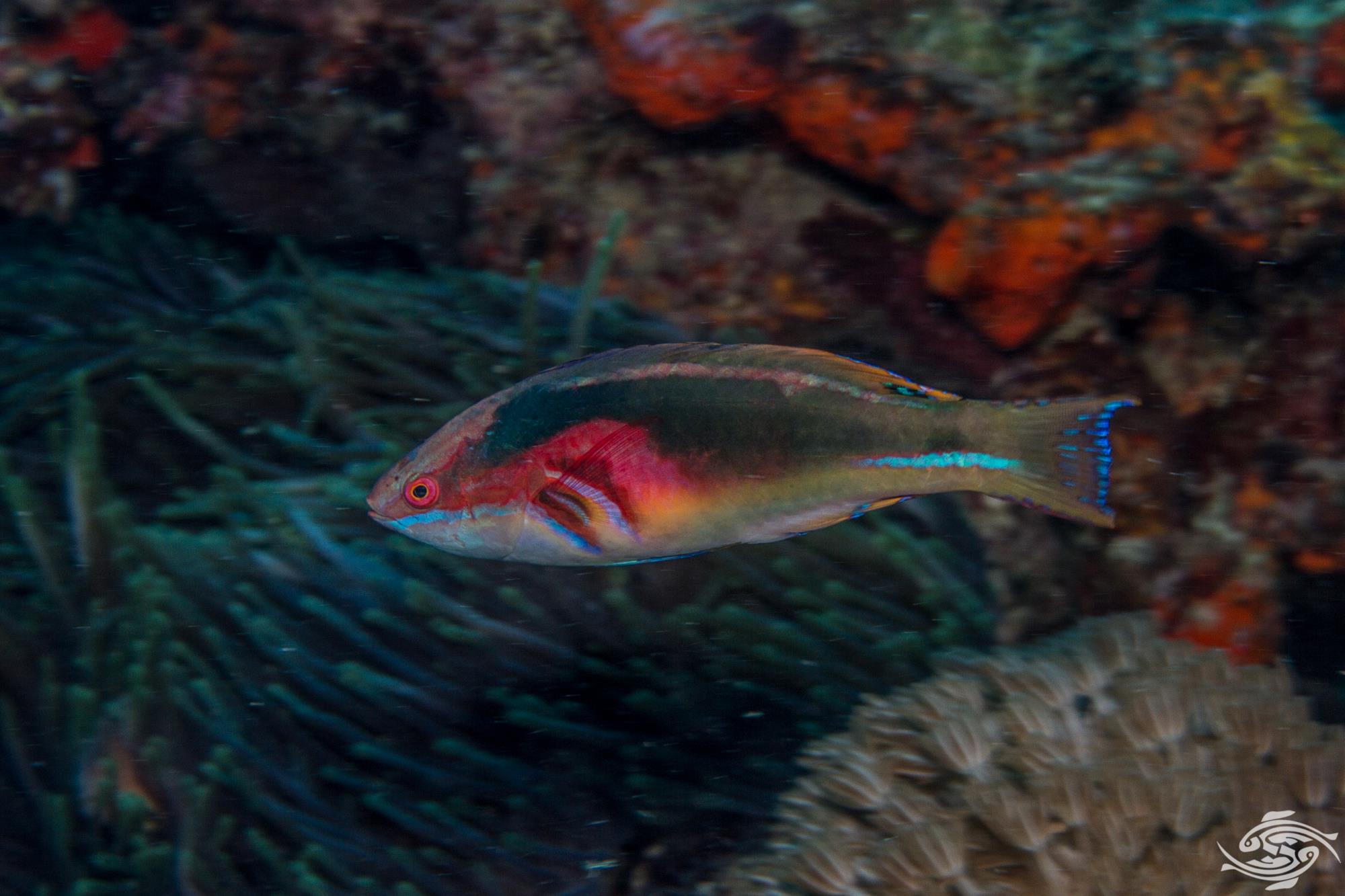 The Exquisite Fairy Wrasse (Cirrhilabrus exquisitus) is a very common wrasse on the reef edge and rubble areas off the Tanzanian coast. They are small colorful wrasses that often congregate in large groups. They are protogynous hermaphrodites. This means they are all born female and at some point in their lives have the ability to change to males.

Exquisite Fairy Wrasse have a wide distribution across the Indo Pacific area and vary greatly in colouration across their range. There is an excellent article here on the taxonomy of the species here. This article gives compelling reasons as to why the species across the range should probably be split into more than one species. All the images in this post are from Tanzania. 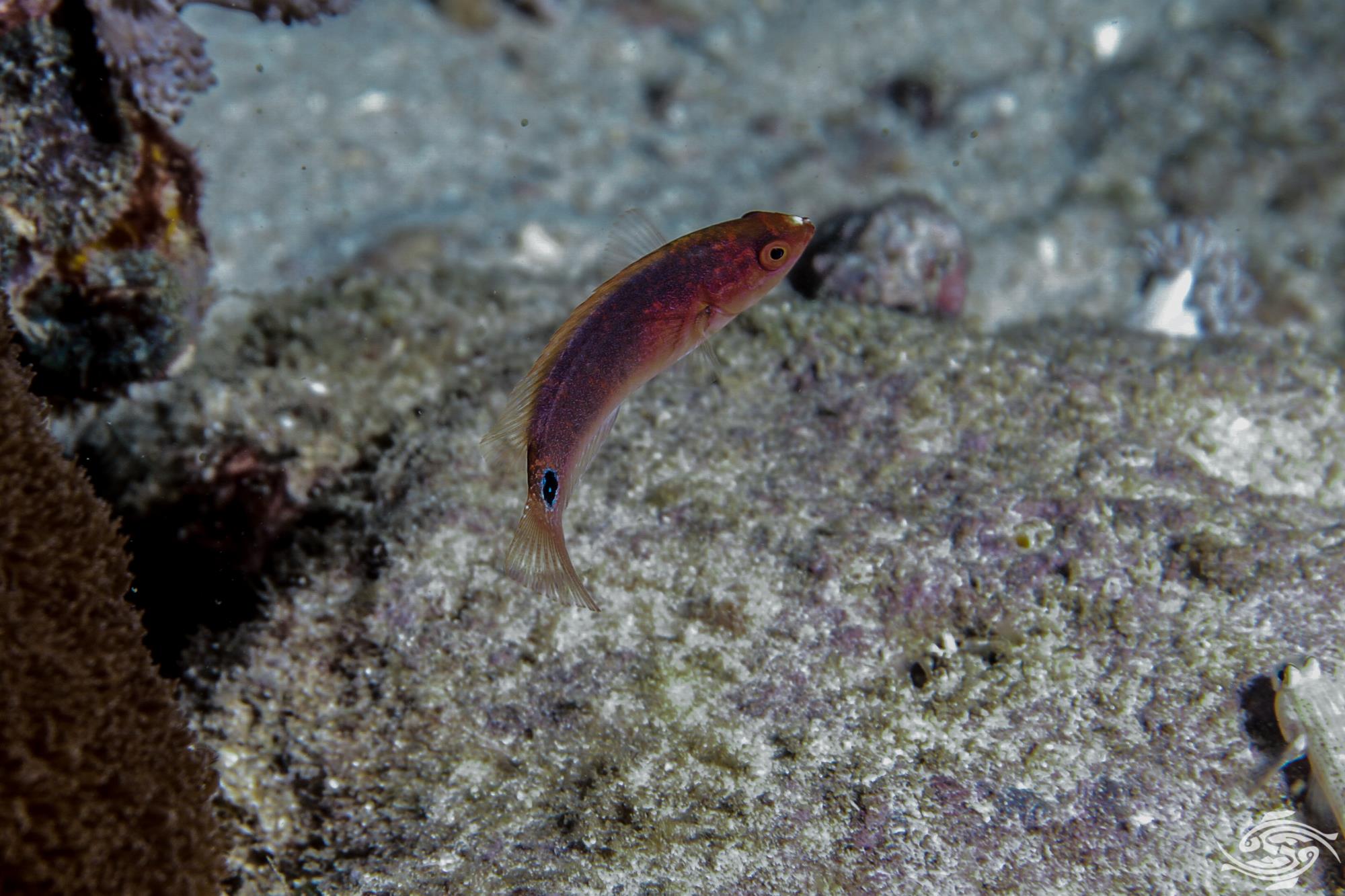 The body colour of the juveniles and females is pinkish with a purple upper body. They have a distinctive white spot on the nose and a small black eye spot ringed in white in the caudal area.  The fins are transparent with a light pink tint.

As they age into young males so a distinct red line develops  along the dorsal area, the upper face is red and an arch of green is formed going backwards into a green rear body. Below the eye there is a brown- yellow pactch. The eye spot loses its white ring and has indistinct edges. There is a red stripe below the eye spot in the caudal area. The dorsal fin is a greenish colour with blue spots towards the rear and the rear of the green caudal fin is tinged with blue lines. A yellow brown line extends from the top of the head across the tip of the dorsal fin.Once these colours are in place the white spot on the nose disappears. In the transition to this stage the head loses its sharpness. 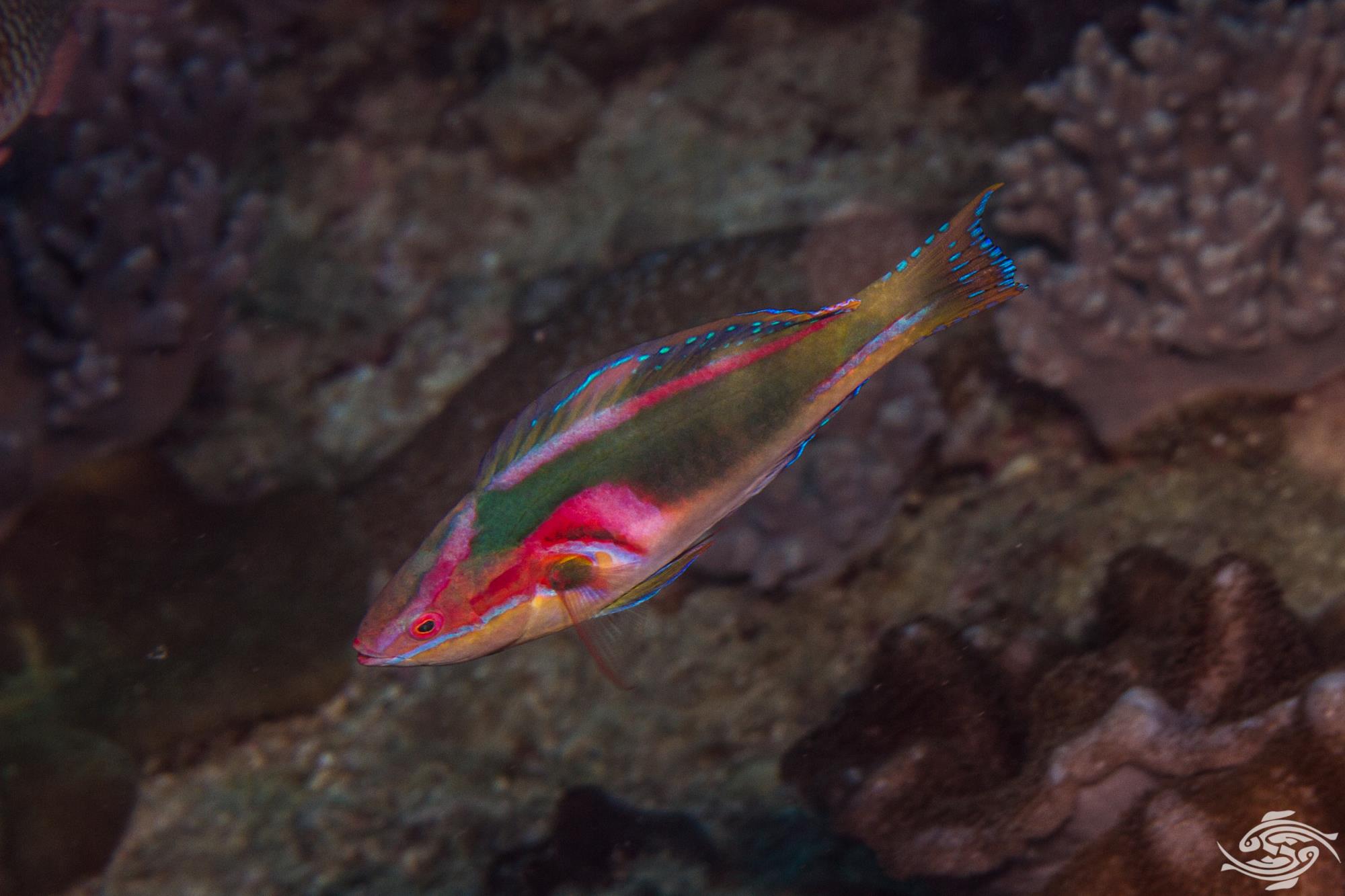 There is a further stage which is pictured in the image above. In this stage a bright light blue line develops under the eye and the red line on the caudal area becomes bright light blue as well.  The dorsal line is no longer as bright red and the head has a more rounded shape.  There are very few of these much larger males around. When one of these males moves into an area, usually at high speed, the smaller males scatter. These large males are approximately 8 cm in length. 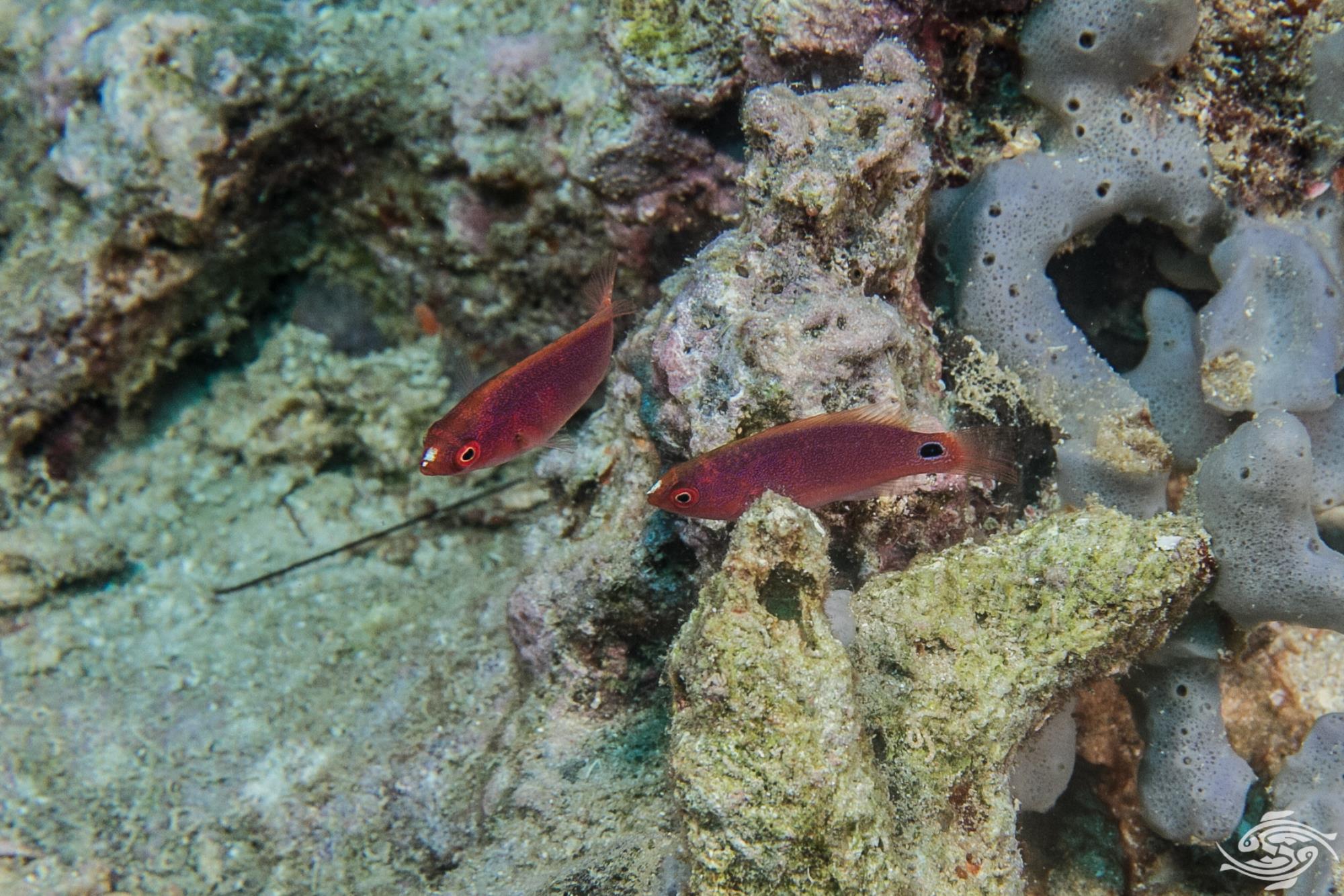 EXQUISITE FAIRY WRASSE IN THE WILD

The small juveniles are extremely cryptic and usually remain in hiding until they are some two to three centimeters long. Once at the two to three centimeter size they are usually seen on rubble areas very close to a hiding spot. They are often in small groups of three to four. As they age and become larger they become braver and are often seen out in the open. Once they begin maturing into young females around five to 6 cm they become quite territorial and they will chase smaller individuals away.

They then transition into young males and at this stage large groups of up to twenty or thirty fish begin congregating. These are a mixture of females and smaller males. During spring the groups become active and there is much milling around. Sometimes the groups join goatfish and feed across the reef. 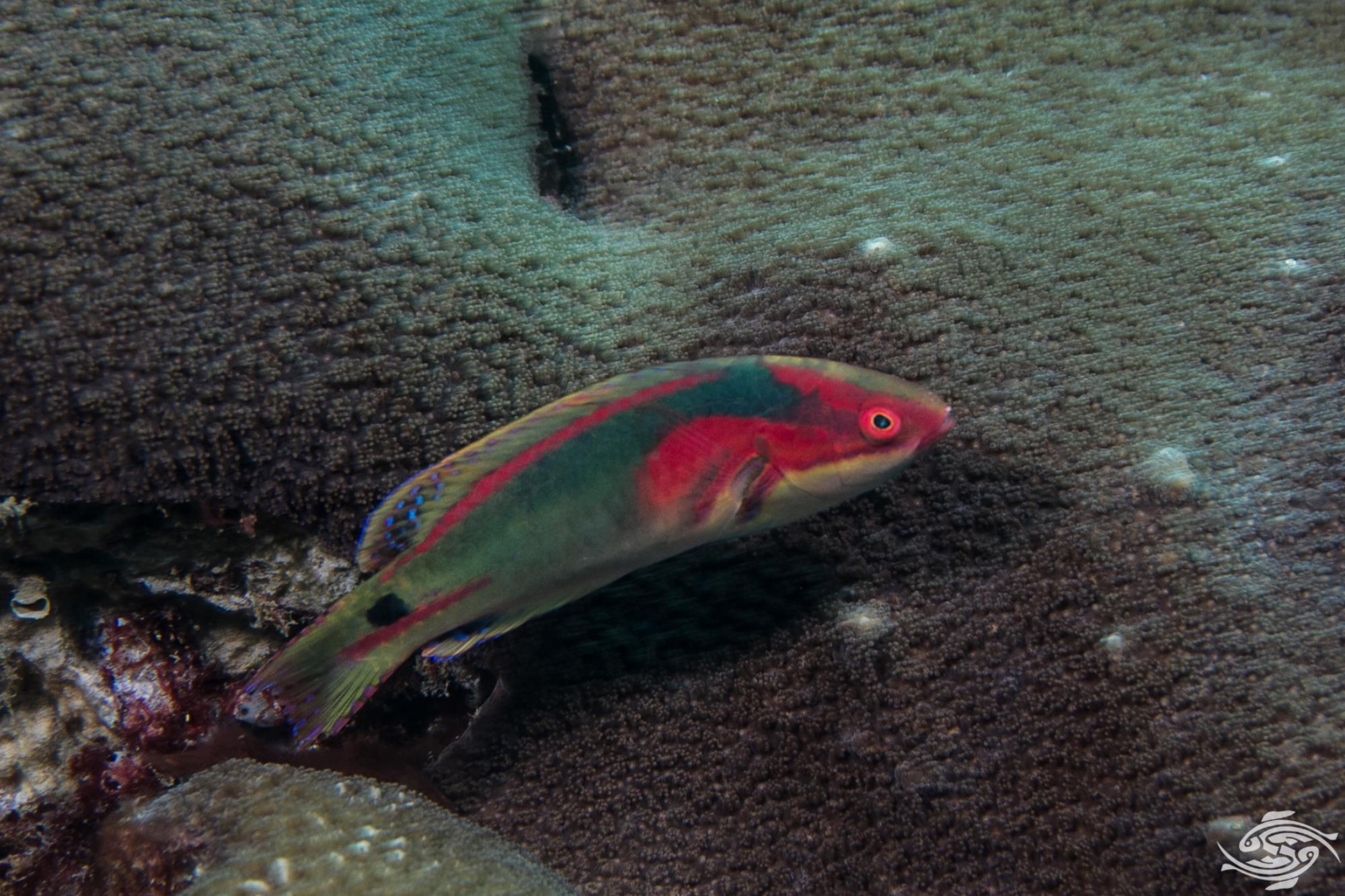 The Exquisite Fairy Wrasse is found across the Indian Ocean into the Pacific across to the Barrier Reef and north to southern Japan. They mainly prefer the rubble and sandy areas between corals and tend to swim low close to the bottom. They are seen in the 12 to 22 meter range but seem more common around the 12 to 18 meter range. We have not seen them deeper than 22 meters in Tanzania. 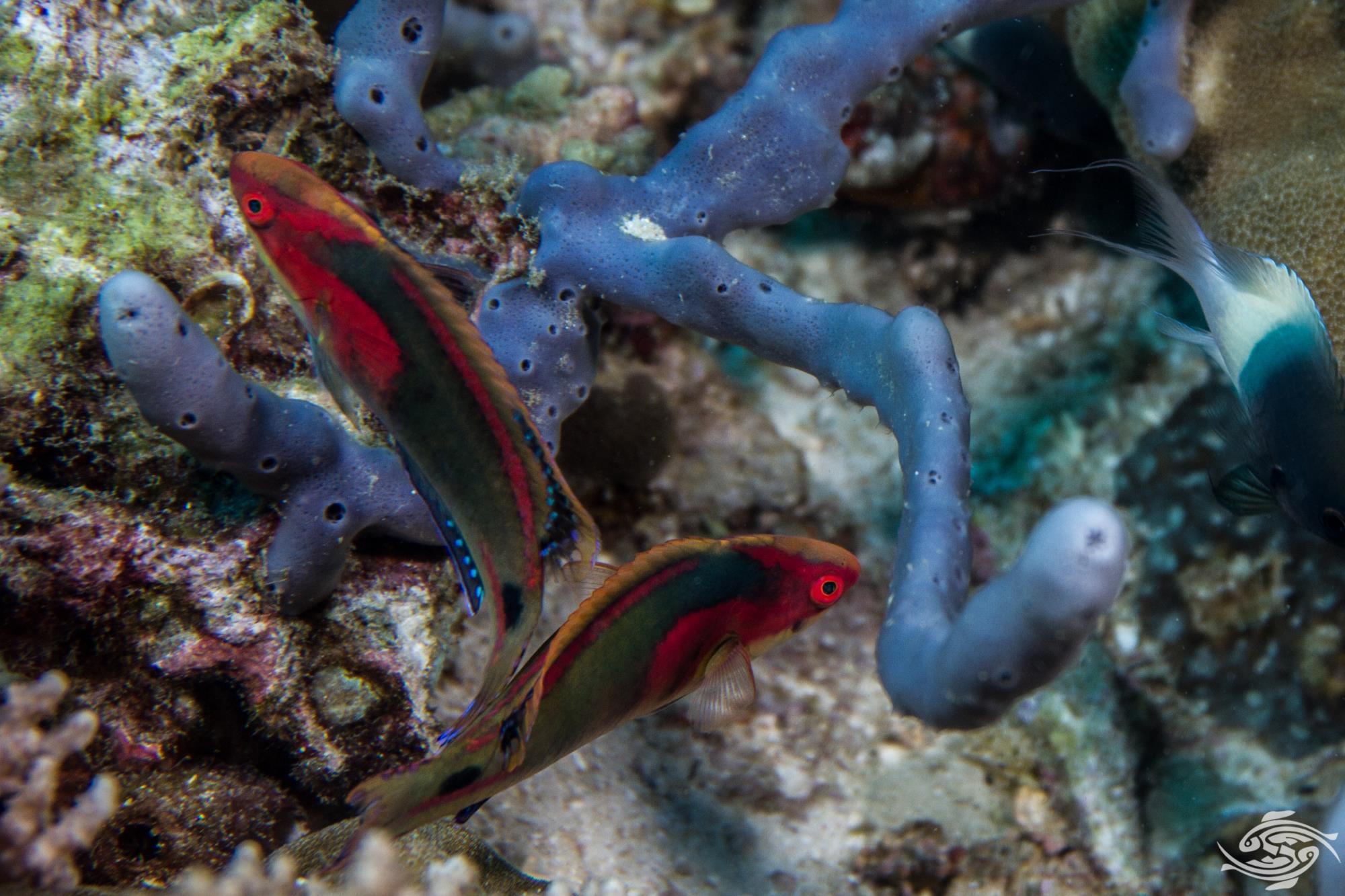 The Adorned Wrasse feed on small benthic organisms and move around the reef feeding with other Wrasses and Goatfish. 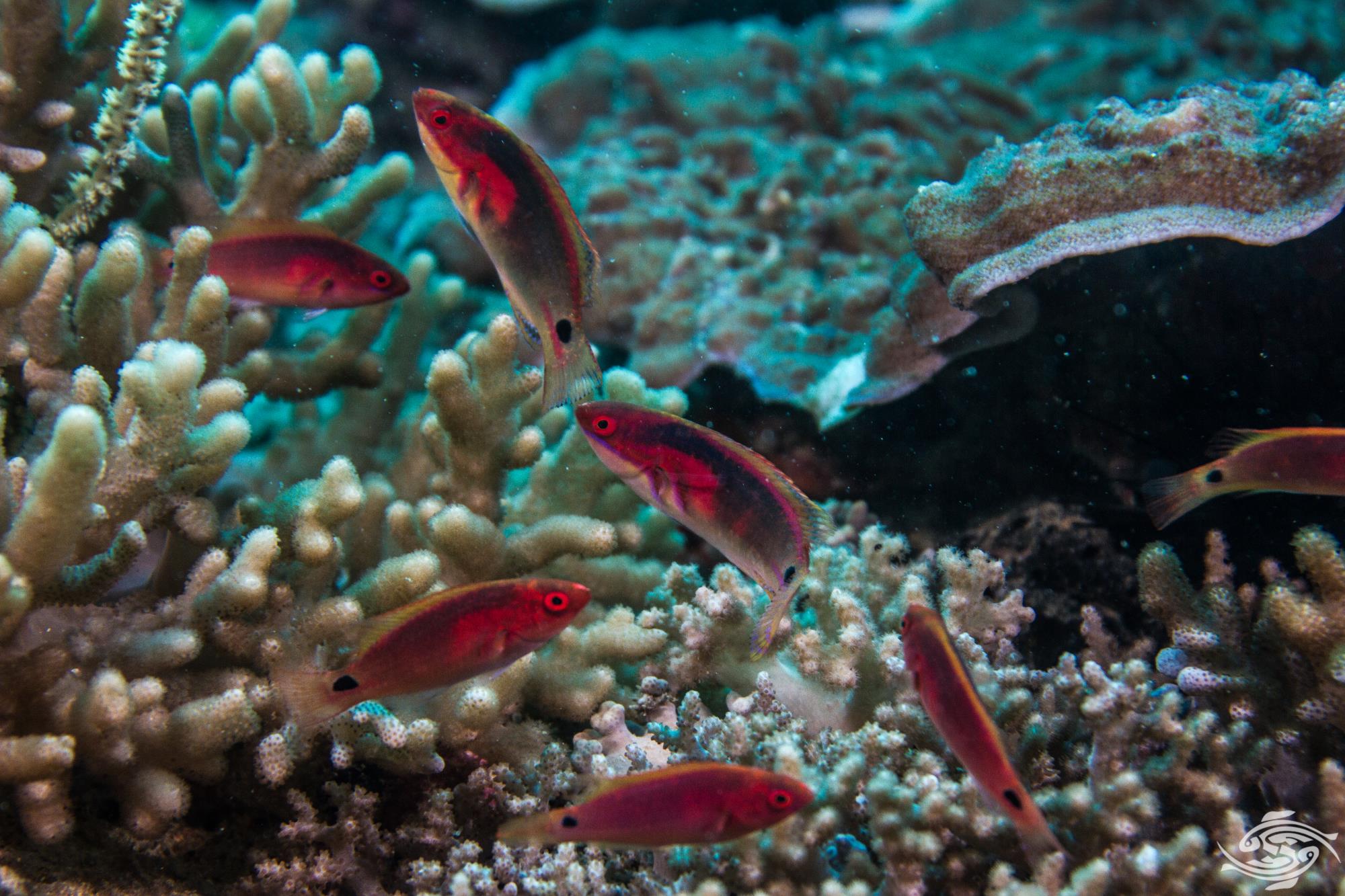 The aggregations in spring are thought to be mating related. The larger males appear to be haremic and alternate between the groups of younger fish. 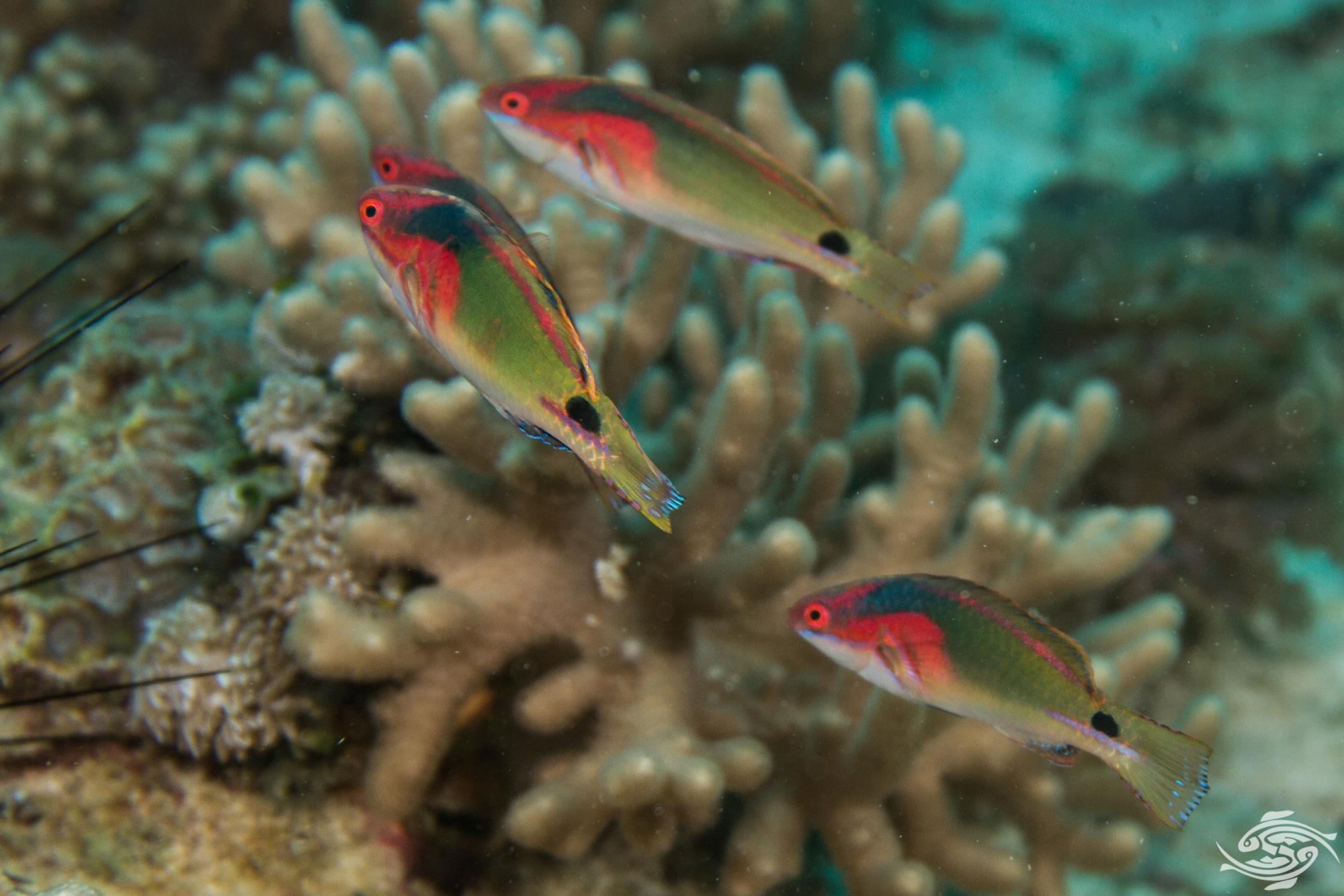 Exquisite Fairy Wrasse are kept in aquariums and being slightly communal in the wild are not as aggressive as other wrasses. The males may become aggressive towards each other once the reach full maturity and it is probably best to only have one. Females should be added first to prevent any  aggression. They are active fish and a long tank with hiding spots would suit them best. They reportedly take to prepared foods quite easily but are fussy over water quality. 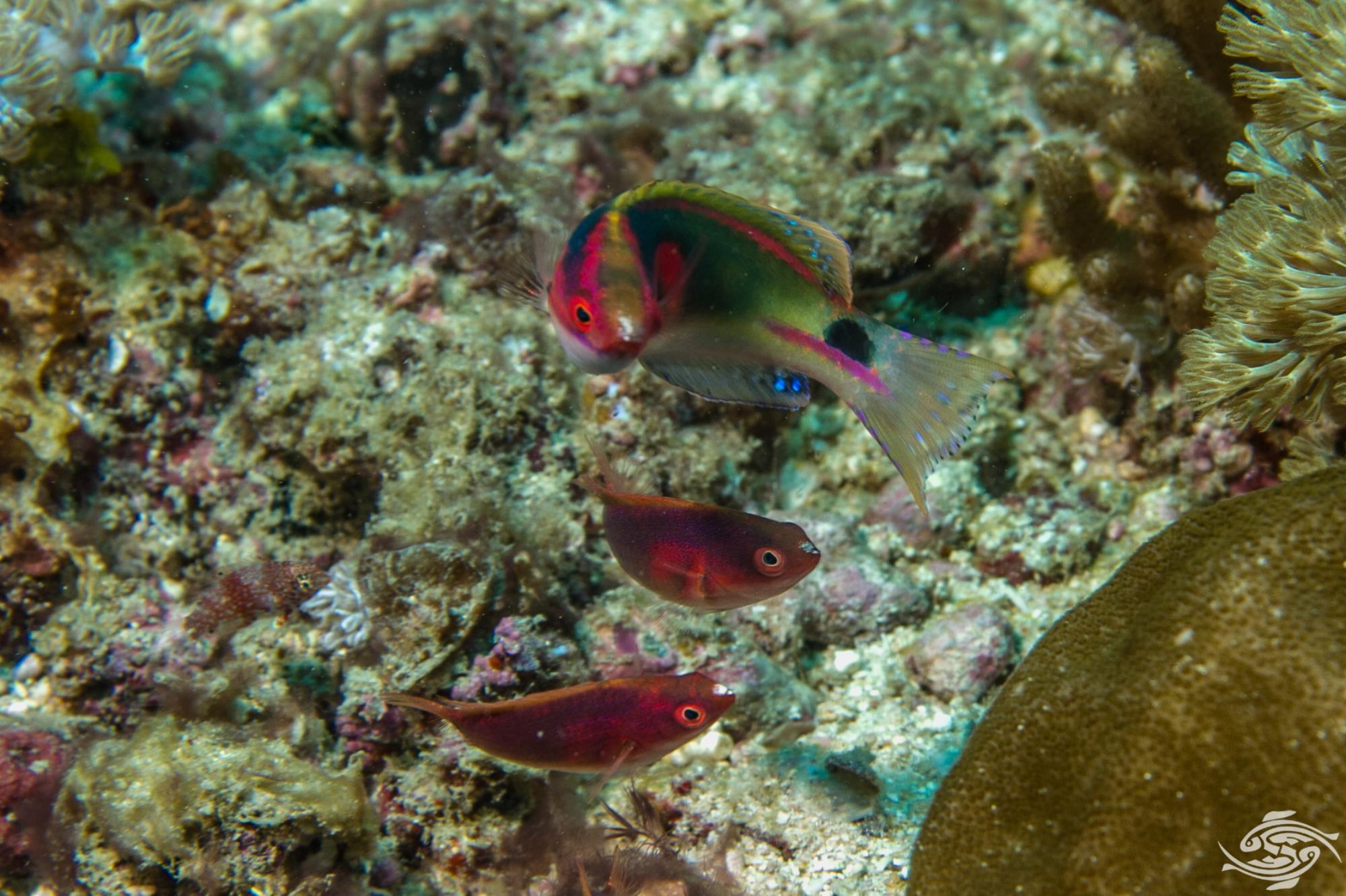 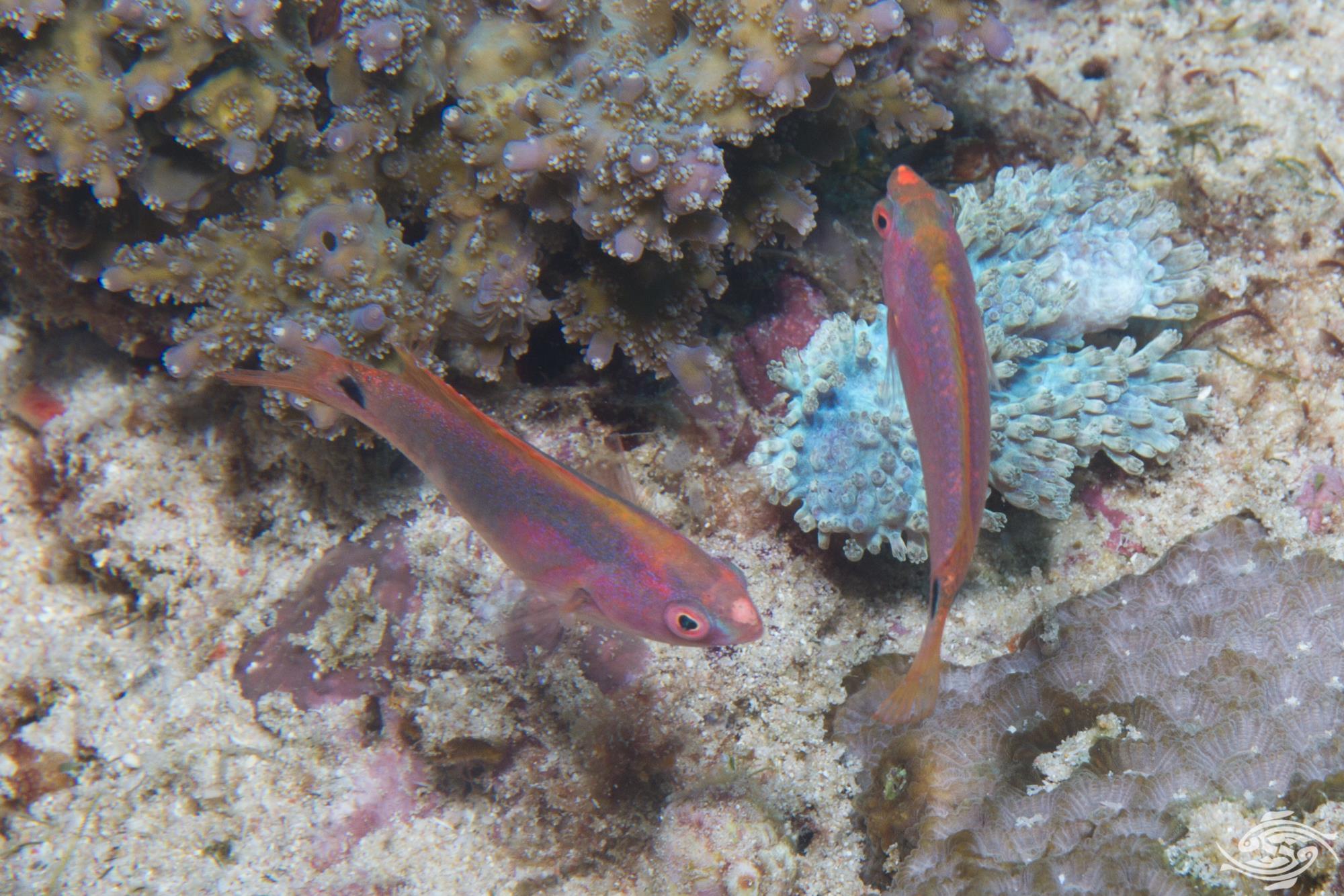 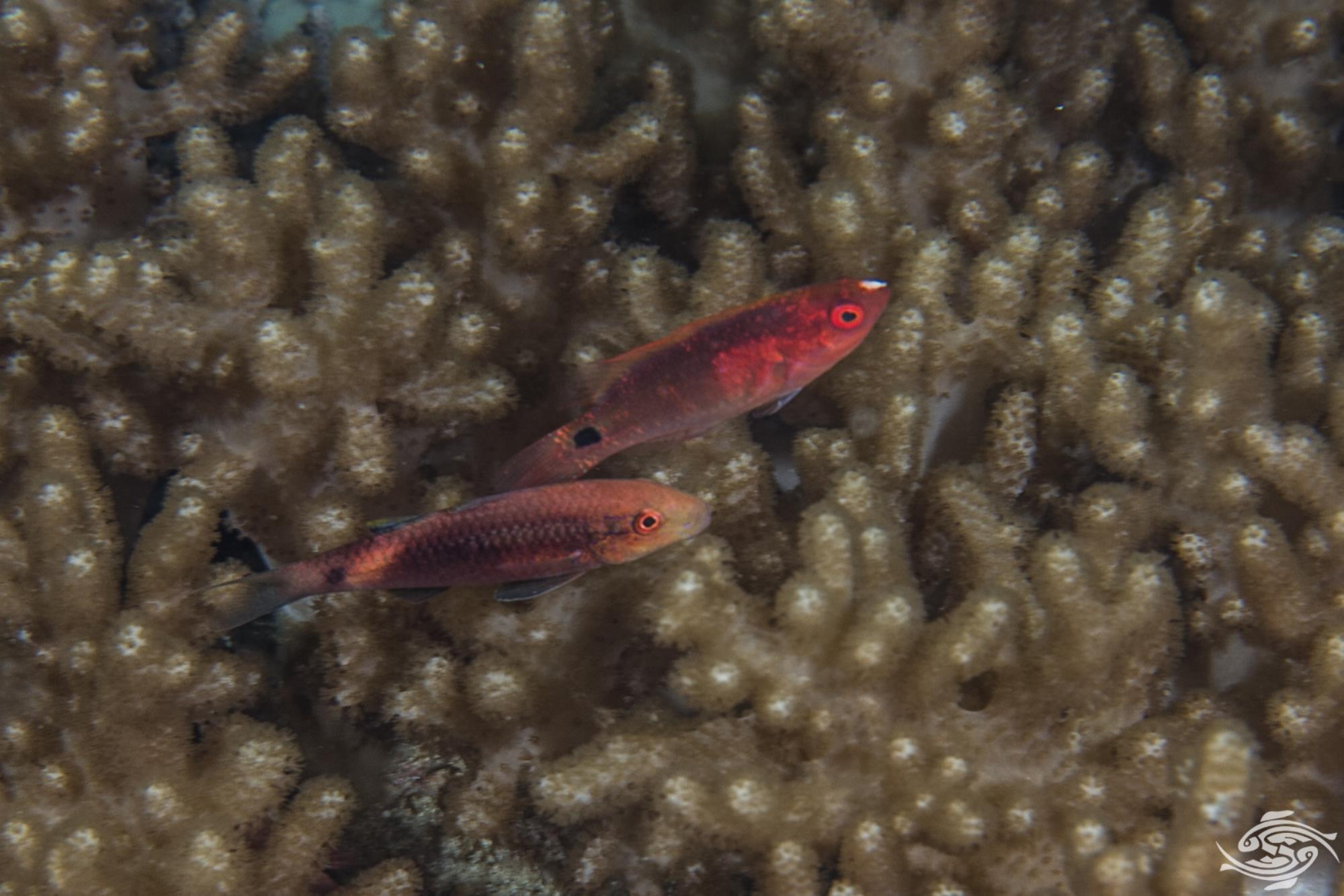