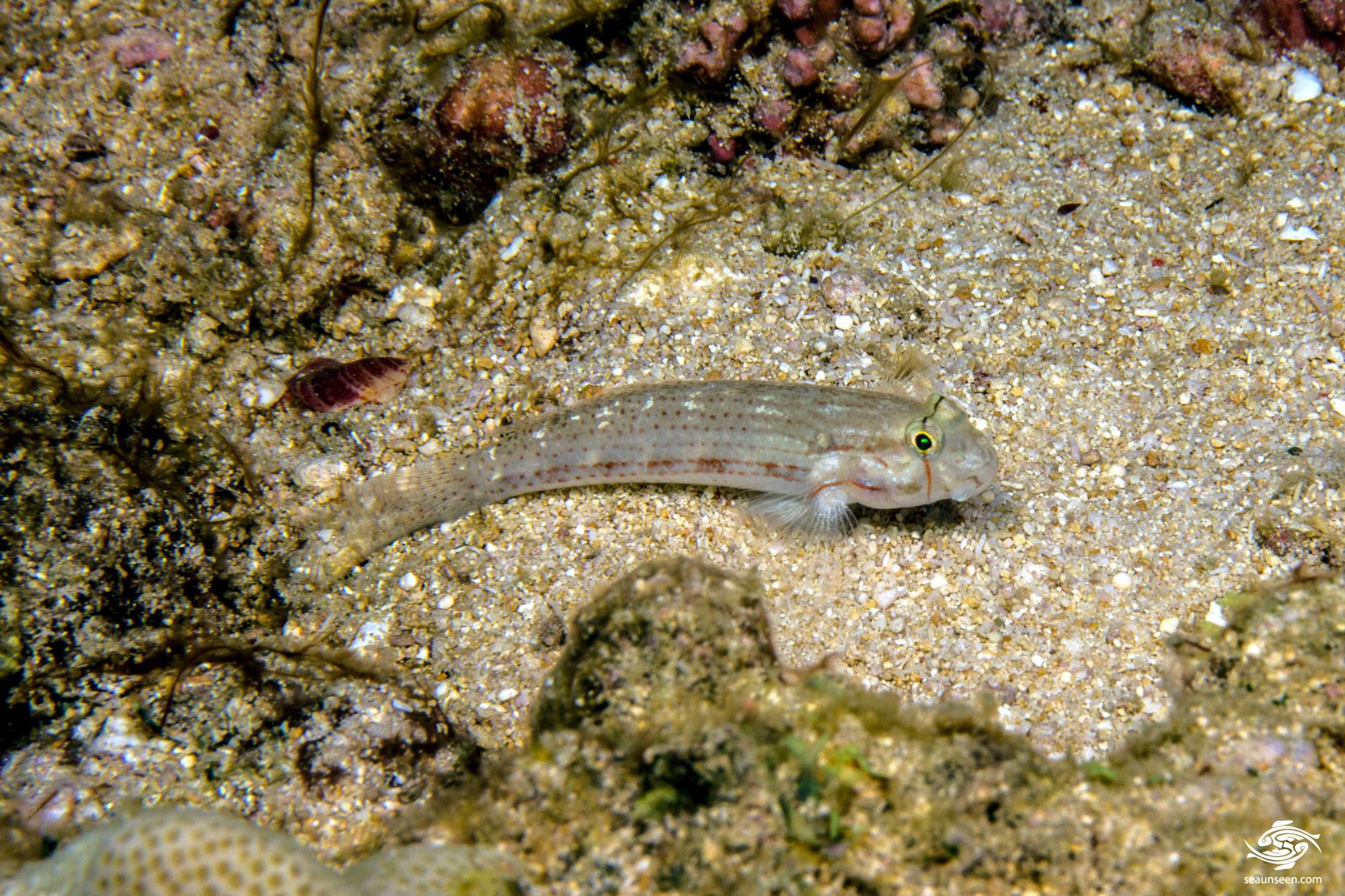 The Eyebar Goby (Gnatholepis cauerensis) is also known as the Shoulderspot Goby, the Bridled Goby and the Cauer Eye-bar Goby. There is some disagreement as to the validity of this species and how they should be described and there seems to be more than one opinion.  The genus Gnatholepis falls in the sub family Gobionellinae and of this sub family only Gnatholepis are marine, the others are freshwater or estuarine.

The specimens in this post were photographed in Tanzanian waters where they are not that common. Depending on who is correct on the classification, they could also be described as Gnatholepis cauerensis cauerensis.  When we obtain more images of this fish we shall post them.

The Eyebar Goby in the images, as it is known on the East Coast of Africa has an elongated cylindrical body with two dorsal fins . The body has an off white colour and lines of reddish dots running the length of the body. On the lower part of the body these dots form irregular blotches. There is a bar running between the eyes which is blackish and this changes to a red colour below the eyes. Some specimens seem to have a spot on the shoulder and others do not. We have seen specimens from 6 to 8 cm in length in Tanzanian waters. 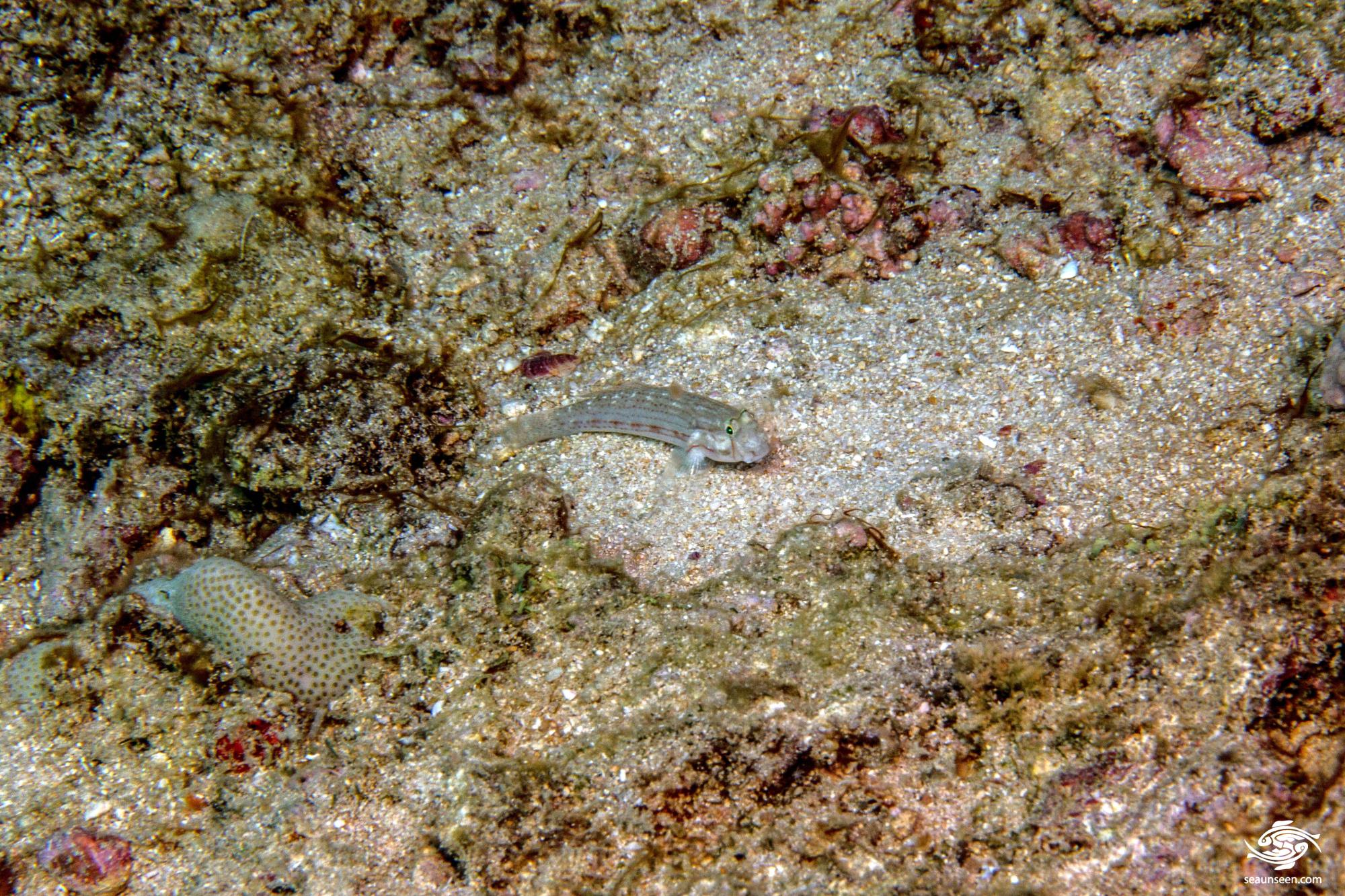 EYEBAR GOBY IN THE WILD

The Eyebar Goby is not that common in Tanzanian waters , or certainly not in the areas we have dived in. They are jumpy and hard to approach but this behavior may be a result of the dynamiting which used to constantly take place. All the fish in these areas are more skittish than else where. 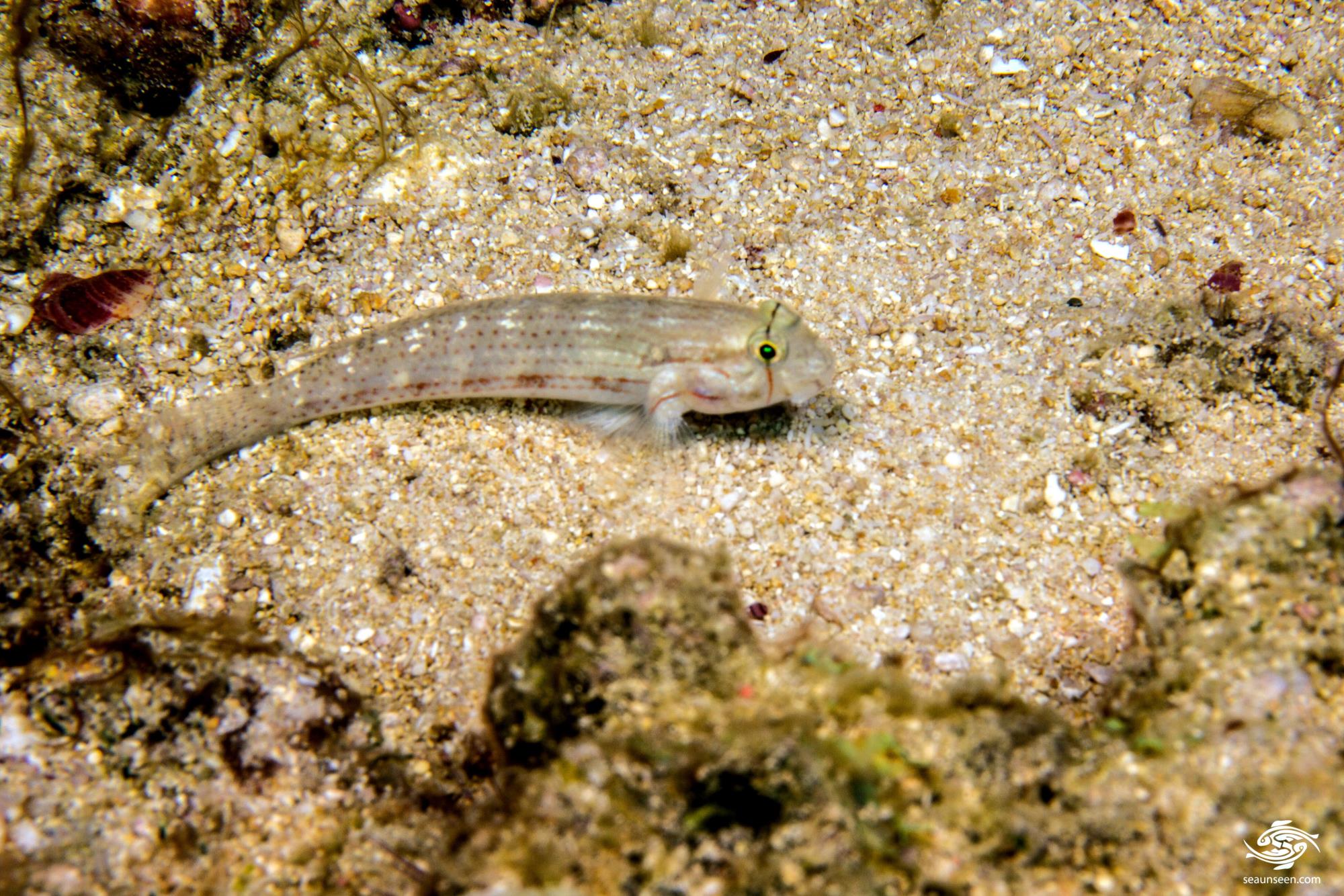 The Eyebar Goby is found across the Indo west Pacific area from East Africa eastwards and even the range seems uncertain. Some sources have them as far east as Hawai.  They are mainly seen on the rubble and sandy areas between corals and  generally swim low close to the bottom and are usually observed sitting on the bottom. 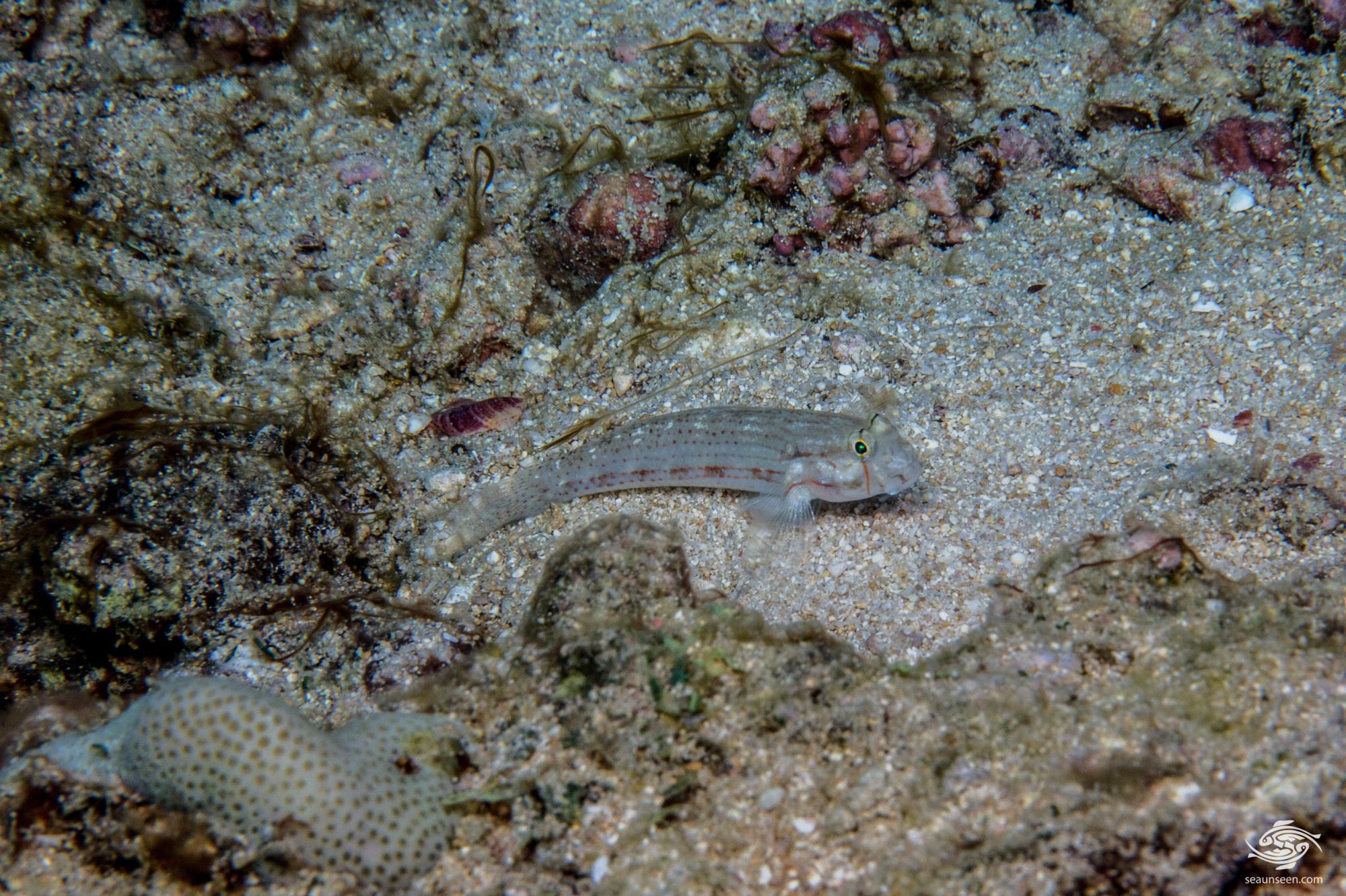 There seems to be very little literature on Eyebar Goby species and their diet seems uncertain. 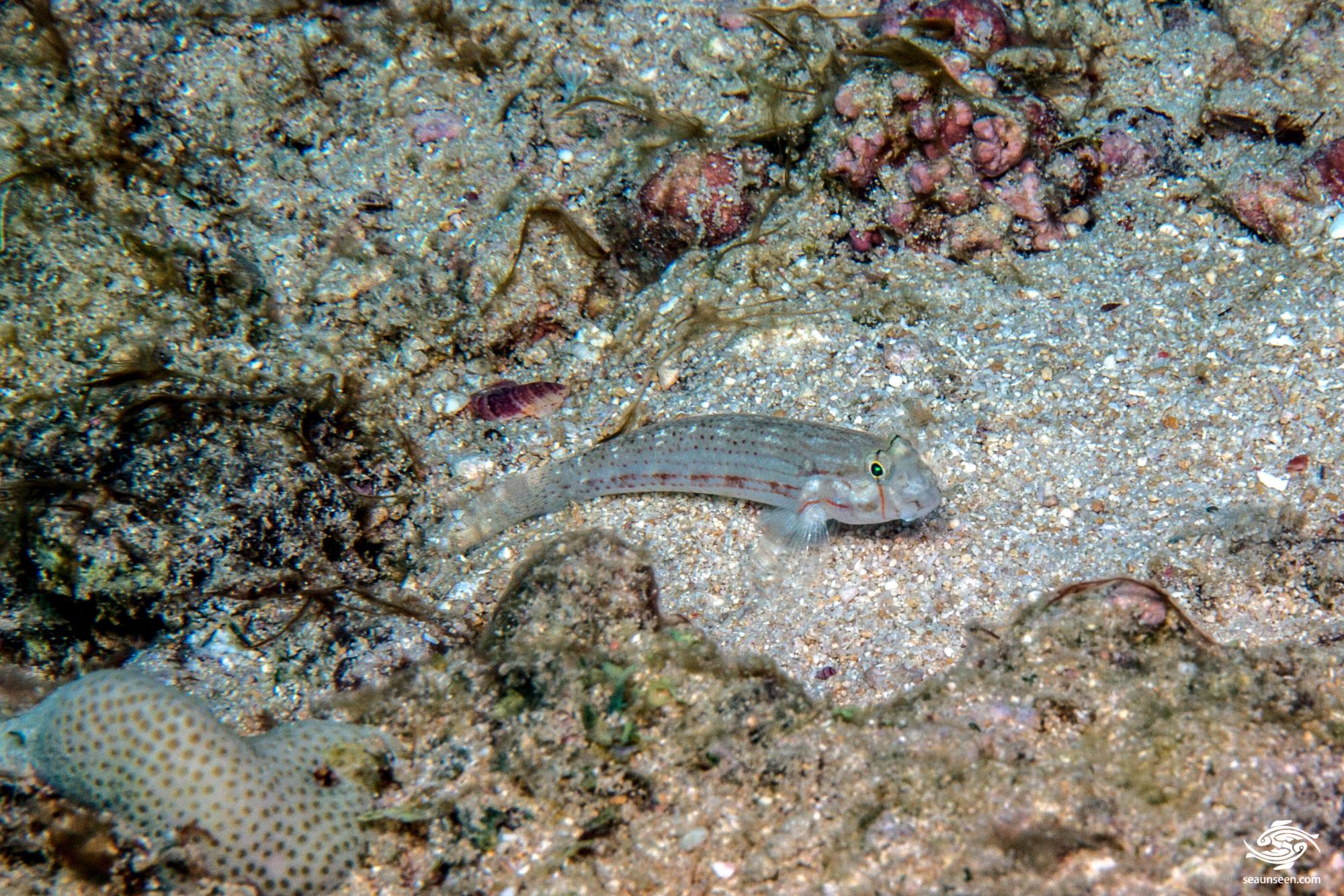 There seems to be little if any research on Eyebar Goby reproductive habits.

Eyebar Goby do not seem to have made it into the trade.

Note there is uncertainty with the classification.