The Eyes of a Mantis Shrimp

The eyes of a mantis shrimp are possibly the most advanced eyes of any known living organism.  The eye is actually a compound eye , made up of a large number of individual “eyes” or photoreceptors called ommatidia.

There is a mid band area on the eye which can be clearly seen in the image below as a stripe across the middle of the eye. As the eye twists and moves around, the angle of the midband area changes. Black dots can be seen in some of the images, these are called pseudopupils or false pupils. 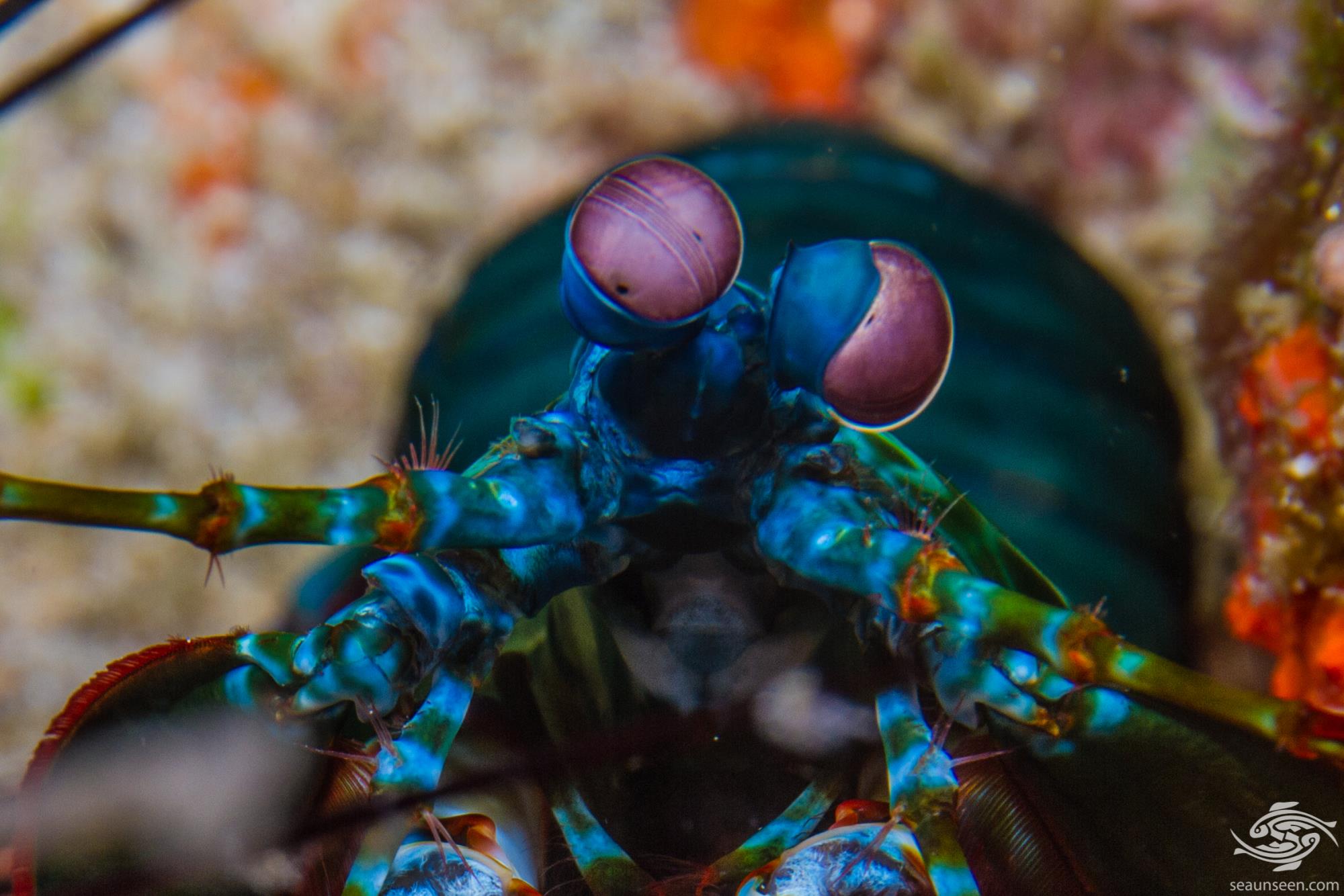 The ommatidia which are aligned directly with the item the shrimp is focused on, absorb light from that precise direction, causing it to appear dark and appearing to look like a pupil. The other ommatidia alongside, reflect light from that same angle causing the sheen contributing to the visual impression that there is a pupil. 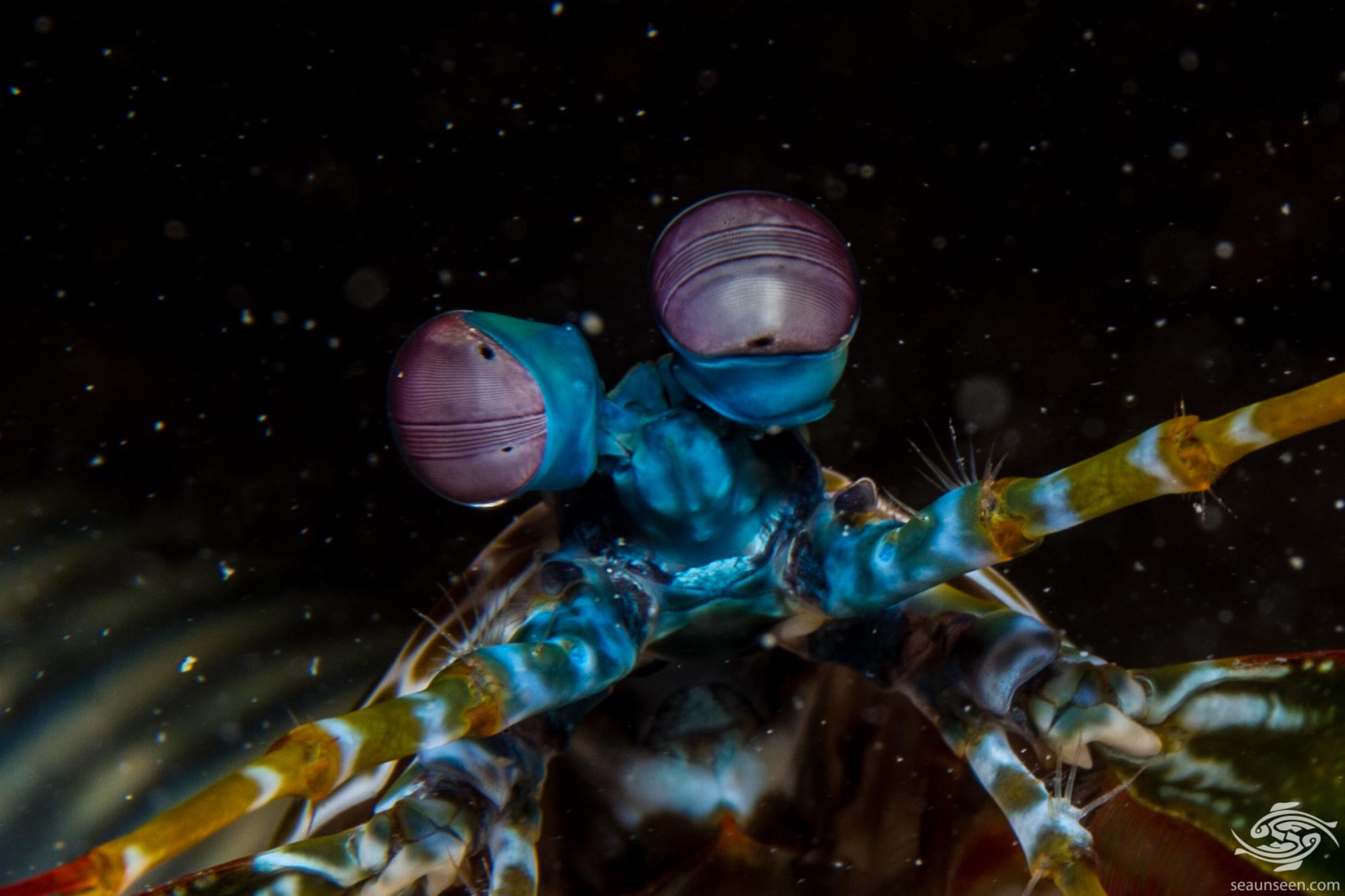 Mantis shrimp’s compound eyes are made up of tens of thousands of ommatidia “eyes”. Each contain photoreceptor cells with associated pigment and support cells. In the middle of the eye there are six rows of modified ommatidia called the mid band, and each row is specialized to detect specific wavelengths of light or polarized light. 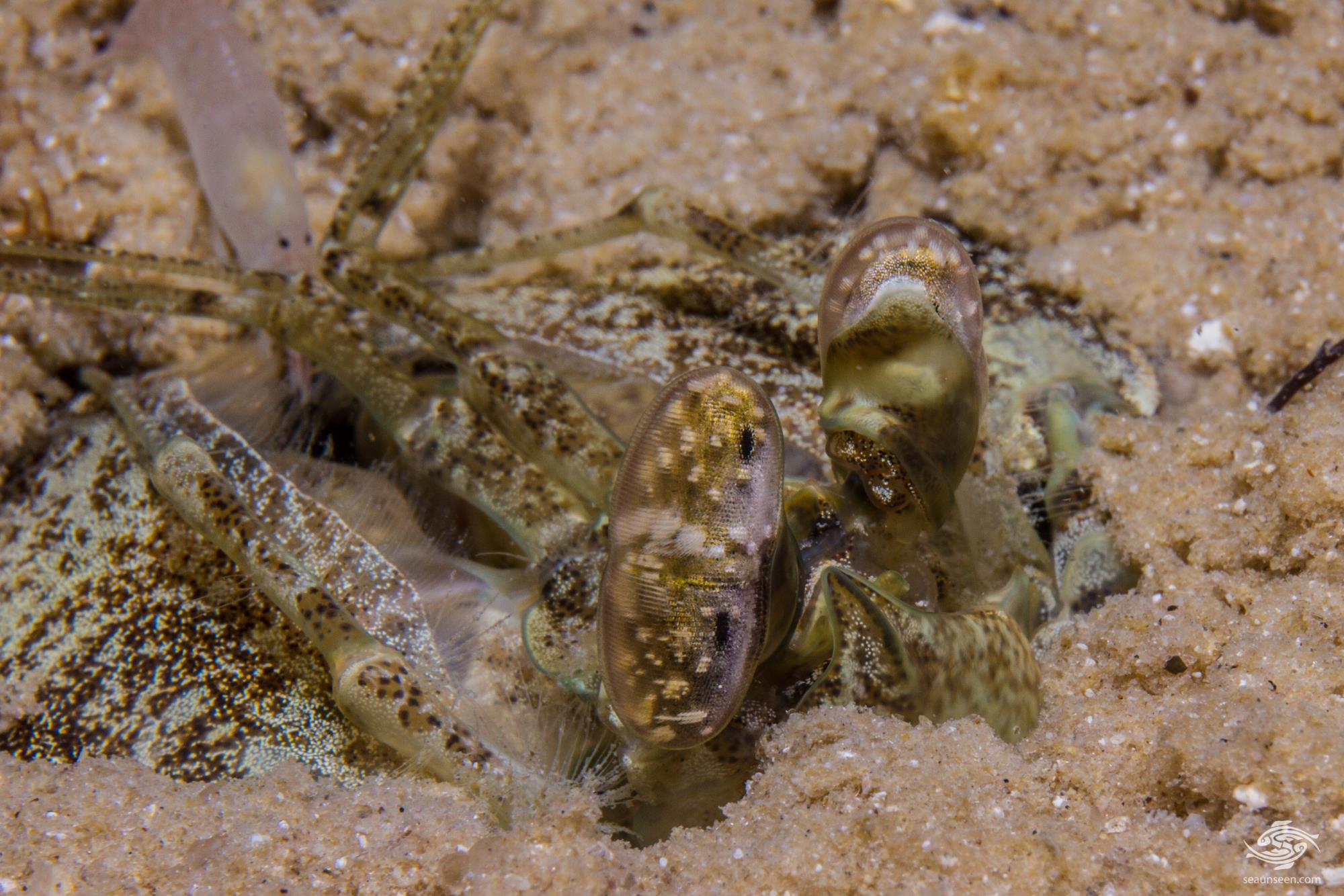 The first four rows picks out light visible to humans as well as ultra violet light. The last two rows pick out polarized light, with the help of tiny precisely positioned hairs. The mantis shrimp is the only known organism to pick out circularly polarized light. 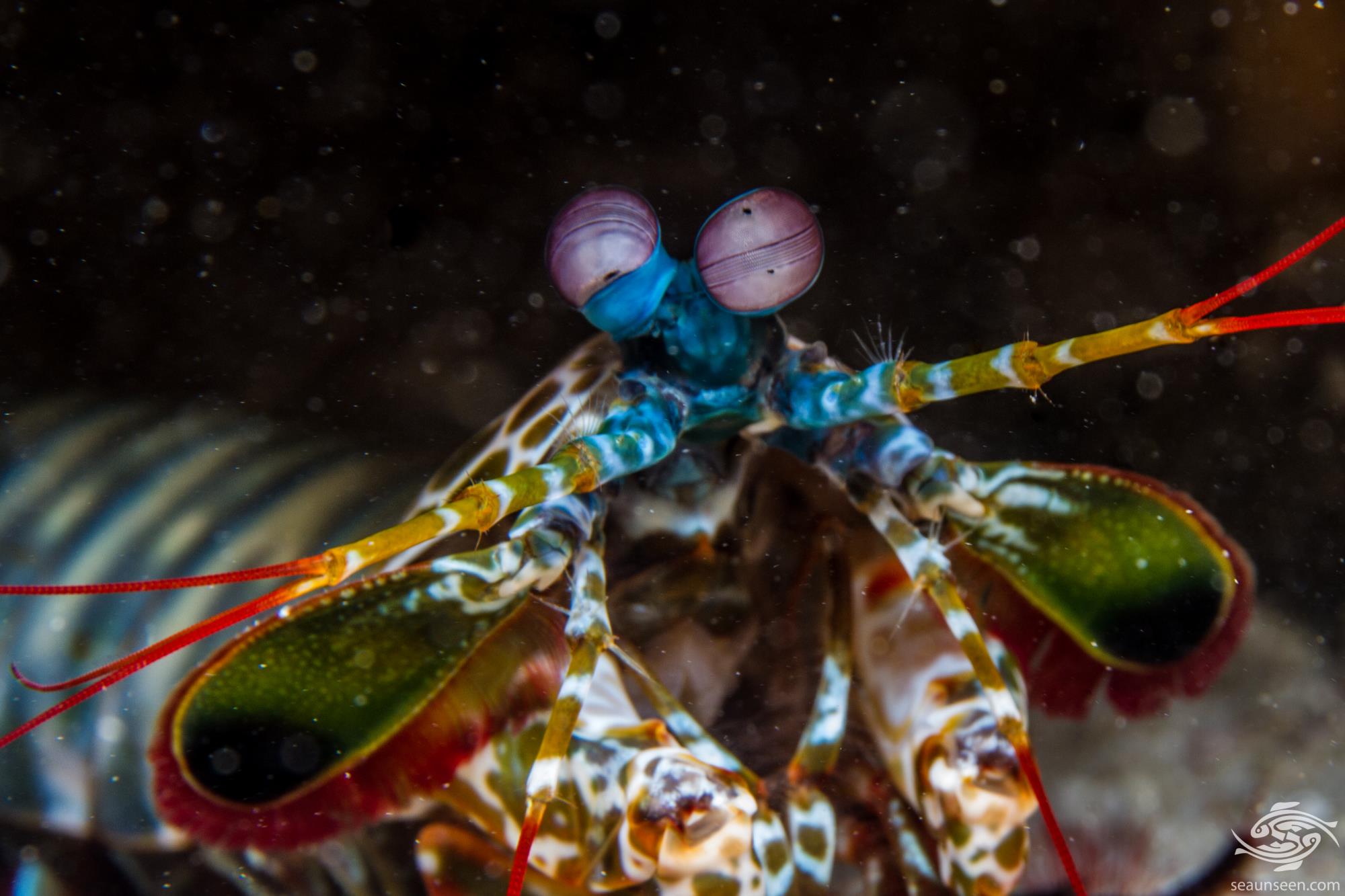 The structure of the eye is unusual. There are three parts of each eye which look at the same point in space, giving them trinocular vision or the ability to perceive depth with just one eye. Each eye is able to move independently giving a very large field of view.

Mantis shrimp eyes are mounted on stalks and can move approximately 70 degrees in any direction. Visual information is processed in the eye its self before the information is transmitted to the brain, sort of like and advanced graphics processor in a computer.

They can see both normal light ultraviolet light and polarized light. The vision of some species begins in near-infrared, spans our entire visible spectrum, and goes across into ultraviolet light. At least one species is able to detect every known source of light both polarized and normal across the entire spectrum giving it optimal vision. 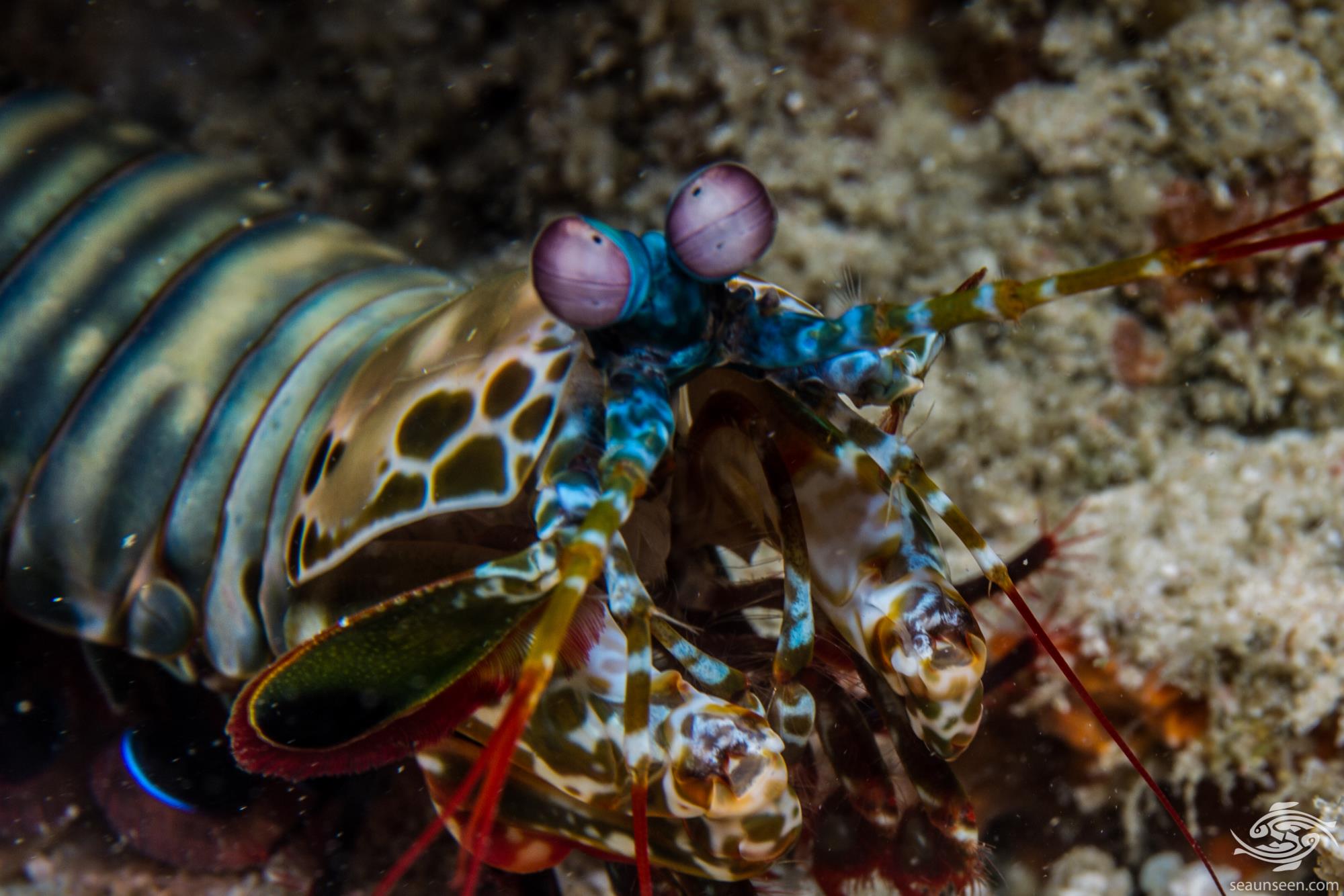 Some species have up to 16 types of photoreceptors whereas by comparison humans have four. They have specialized color filters on their retina which further process visual information in specific color frequencies.

The areas in which the mantis shrimp live are areas of extremely rapidly changing light conditions both during sunlight and moonlight, each tiny wavelet on the surface focusing surface light downwards in a multitude of different directions every millisecond creating a discotheque type environment of extremely rapid multi-directional light changes too fast for most eyes to deal with and see. 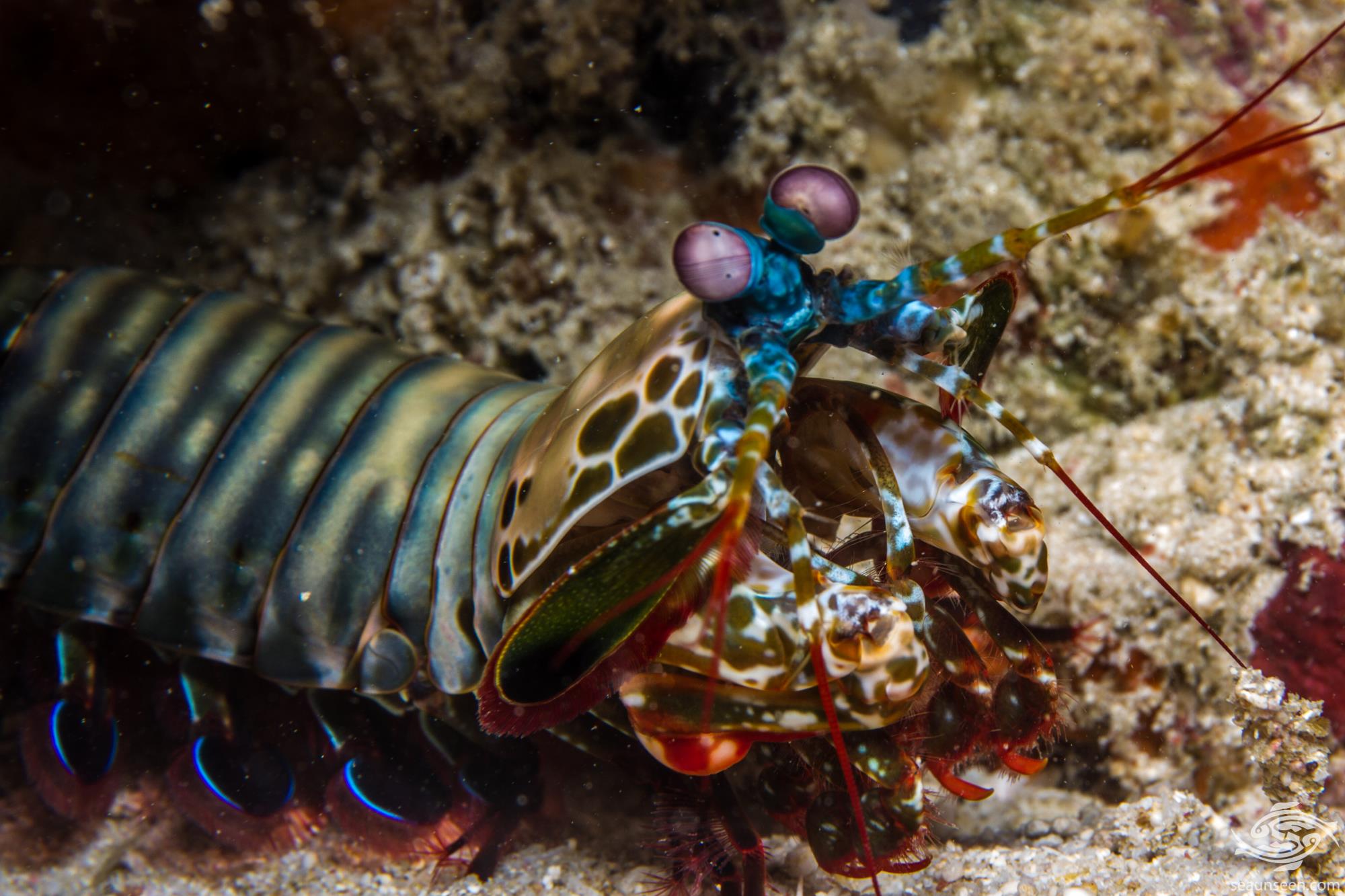