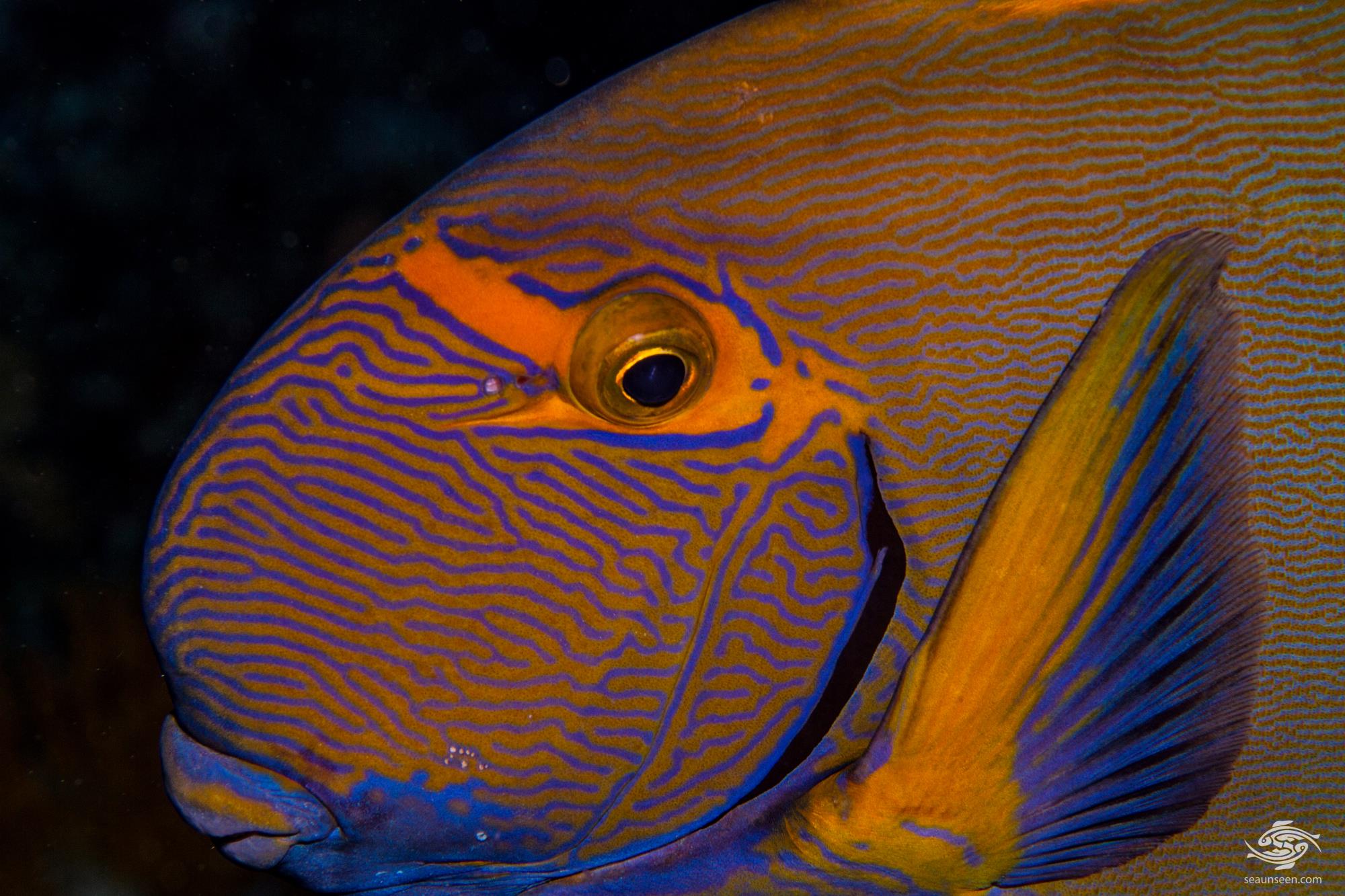 The Eyestripe Surgeonfish (Acanthurus dussumieri) is also known as the Pencilled Surgeonfish, Dussumier’s Surgeonfish, the Hawaiian Surgeonfish and the Ornate Surgeonfish. Members of the Acanthuridae family have a retractable razor sharp spine on either side of the caudal area.

They obtain their name Surgeonfish from these blades which can be seen in the image below.  The blades are used for defense and possibly in territorial disputes and can inflict significant damage. The blades are reported to contain toxins but there seems to be no scientific evidence for this. All surgeonfish have very small scales giving them an unusual appearance. Many are able to change their colouration in intensity and colour according to their mood. 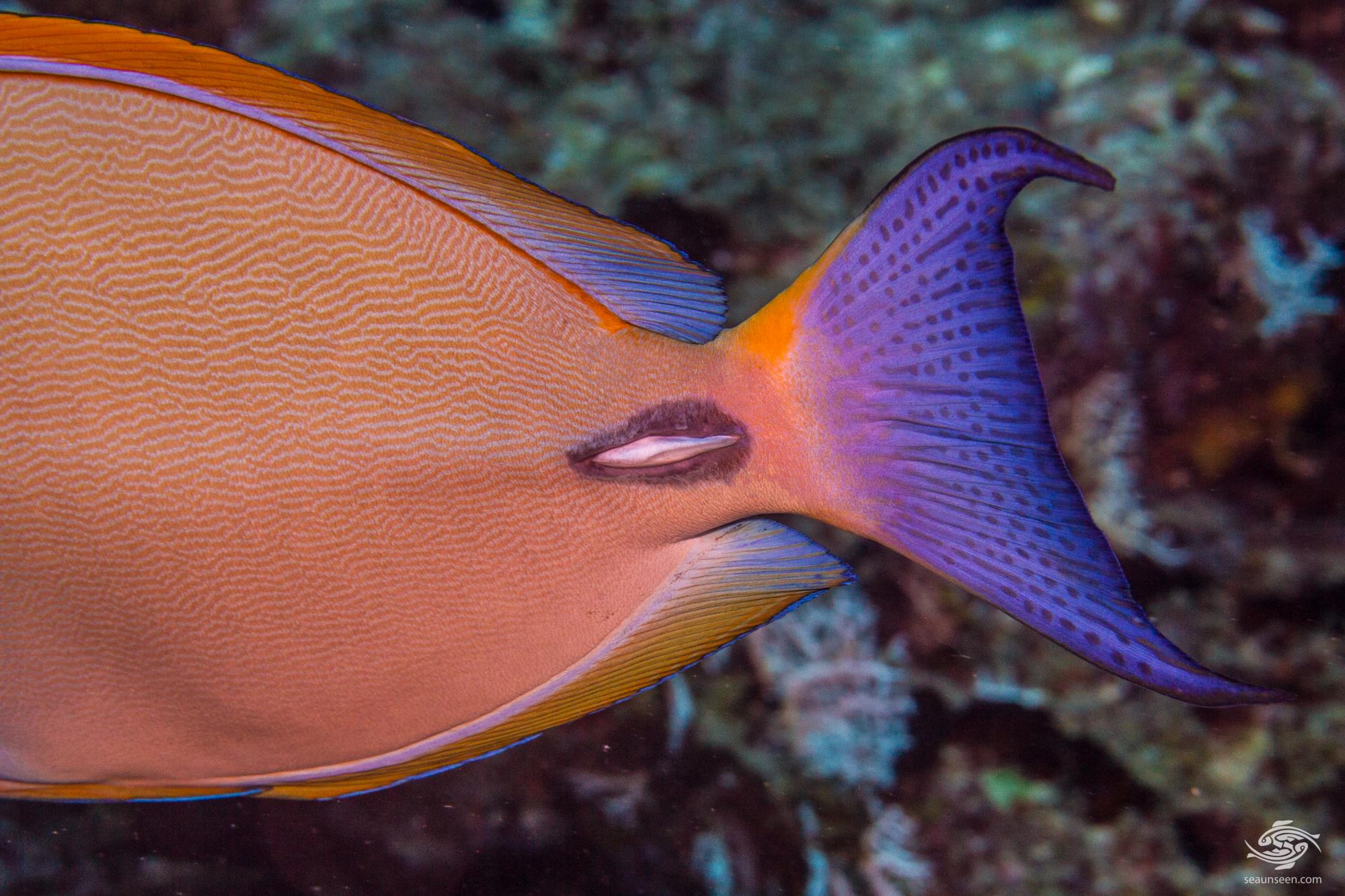 The Eyestripe Surgeonfish has an elongated oval body tapering back onto a lunate caudal fin with a laterally compressed body. The head area is rounded and the mouth protrudes slightly with a fleshy upper lip. Their body is a light brown orange colour with irregular blue lines across it that vary in intensity and from some angles appear white at times depending on the mood. The head has more pronounced blue lines on it and the background colour is more orange-yellow. They have an orange stripe across the eye which extends quite far forward onto the forehead but does not meet up and from which their common name is derived.

The fins are an orange yellow colour tipped in blue and the caudal fin has brown dots on the blue. The caudal blade is white ringed in black.  They grow up to 53 cm in length but around 40cm is more common in the wild. The larger specimens in the 50 centimeter range have a more pronounced bulge on the lower forehead. 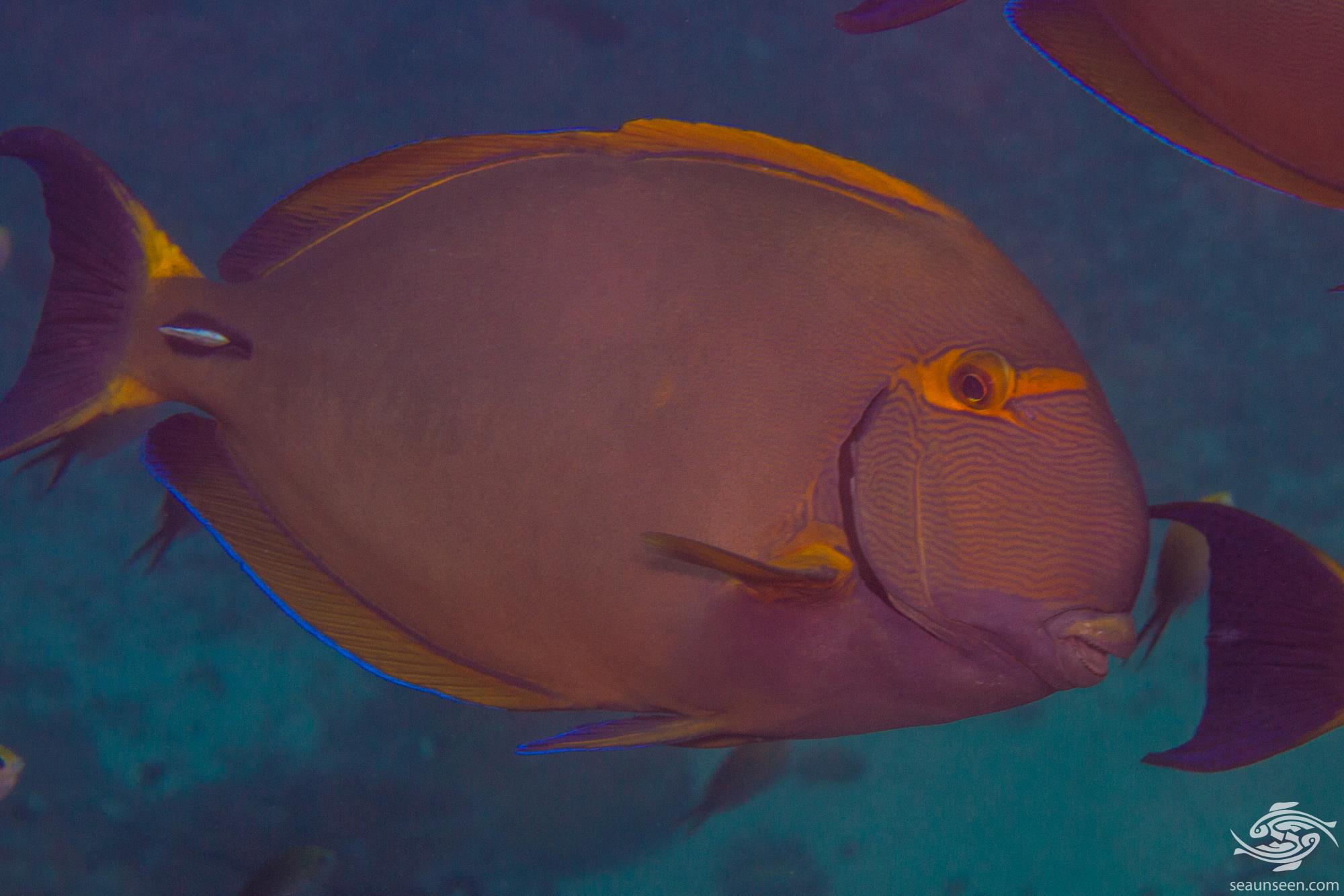 EYESTRIPE SURGEONFISH IN THE WILD

The Eyestripe Surgeonfish is not common in Tanzanian coastal waters, but in certain areas in which conditions seem to favor them they can be seen in fairly large numbers. They seem to prefer offshore reefs. They are seen solitary and in small groups. 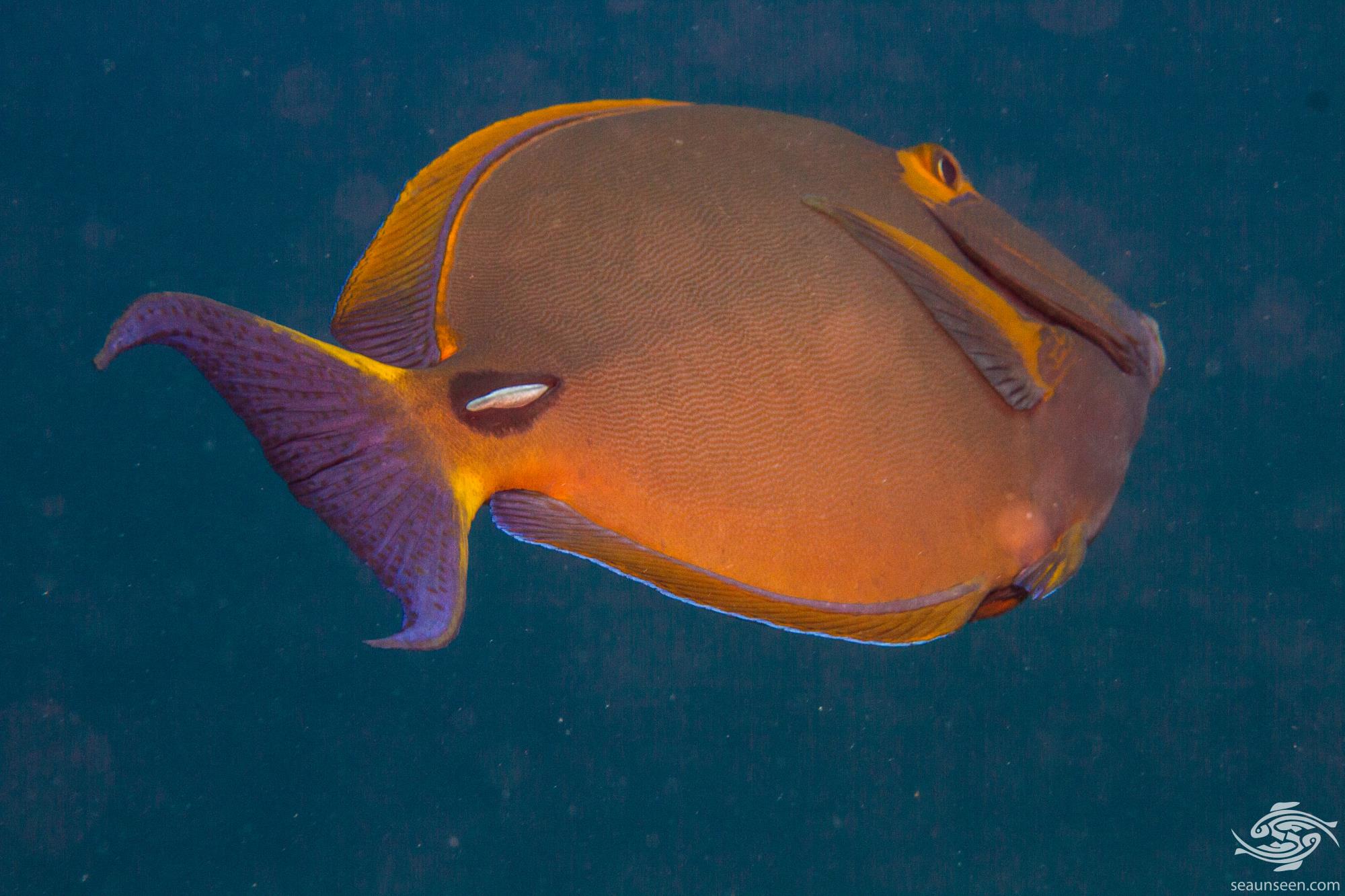 Eyestripe Surgeonfish are found across the Indo West Pacific area from South and East Africa, excluding the Red Sea, to Southern Japan  down to northern New Zealand and across to the mid Pacific Islands including Hawaii. In Tanzania they are most common from 20 meters downwards and we have never seen them shallower.   Their depth range is from 4 to 131 meters. 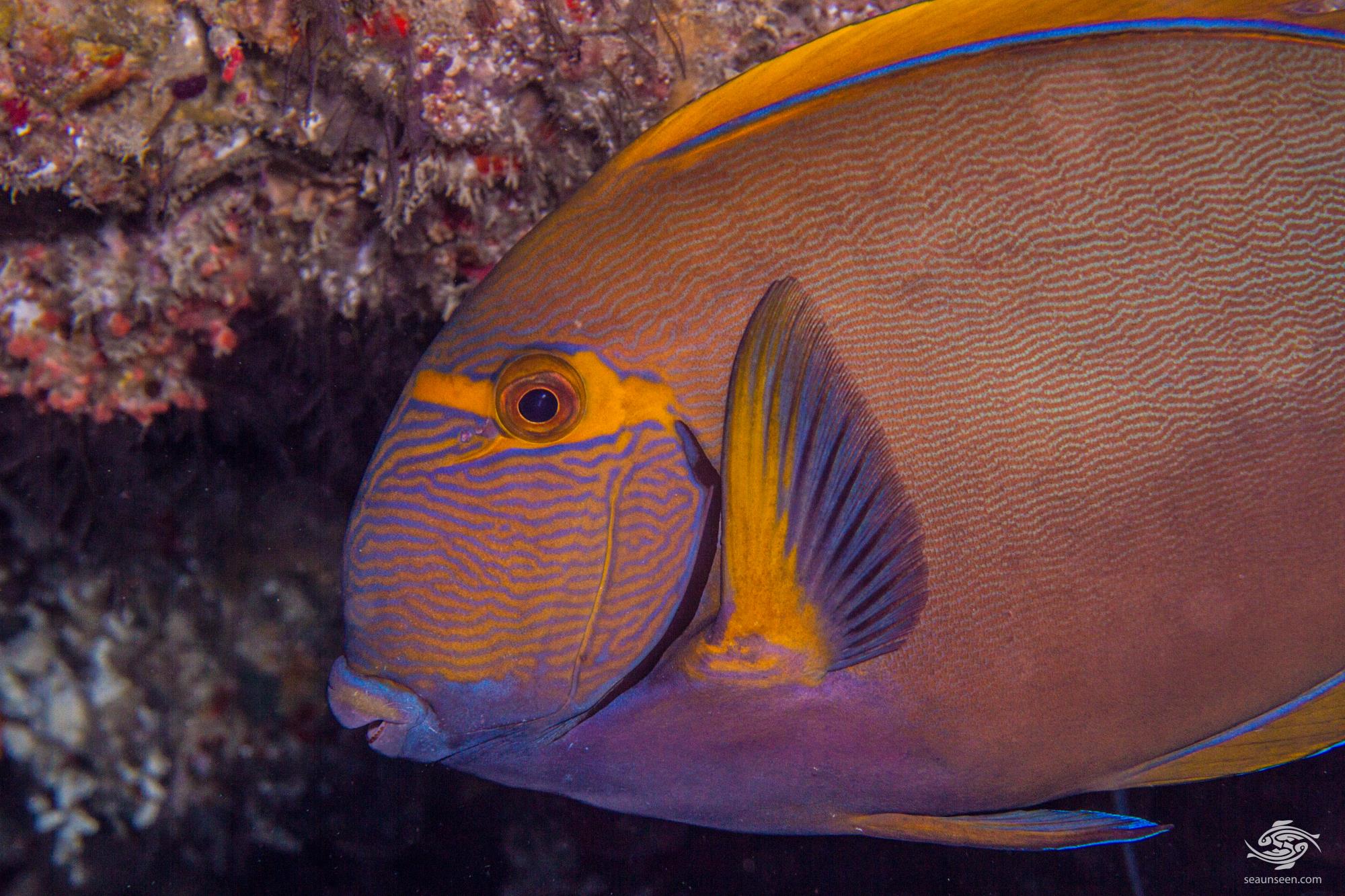 The Eyestripe Surgeonfish feed on algae and sieve detritus from sand.   From observation in the wild they are quite selective eaters. 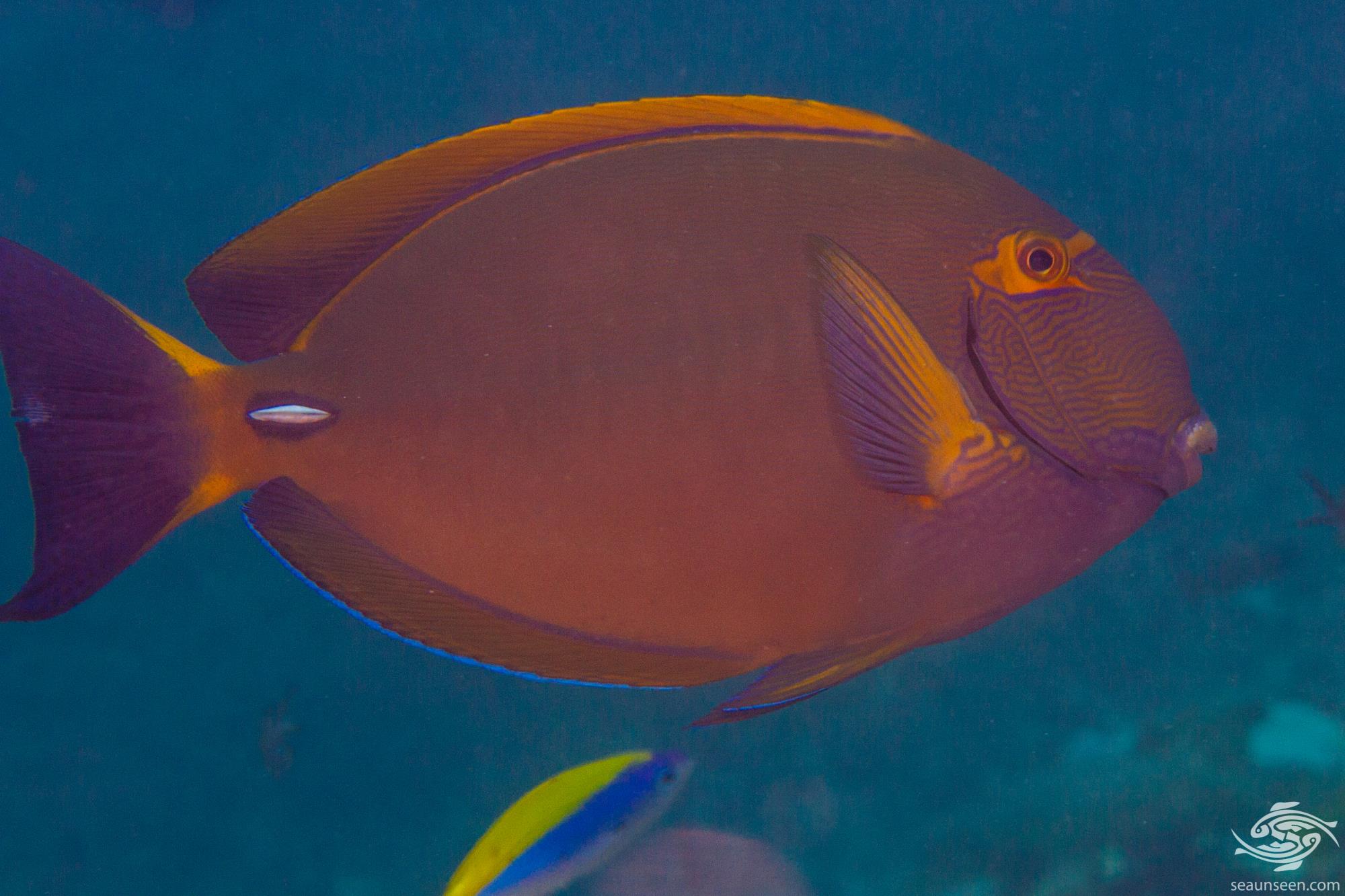 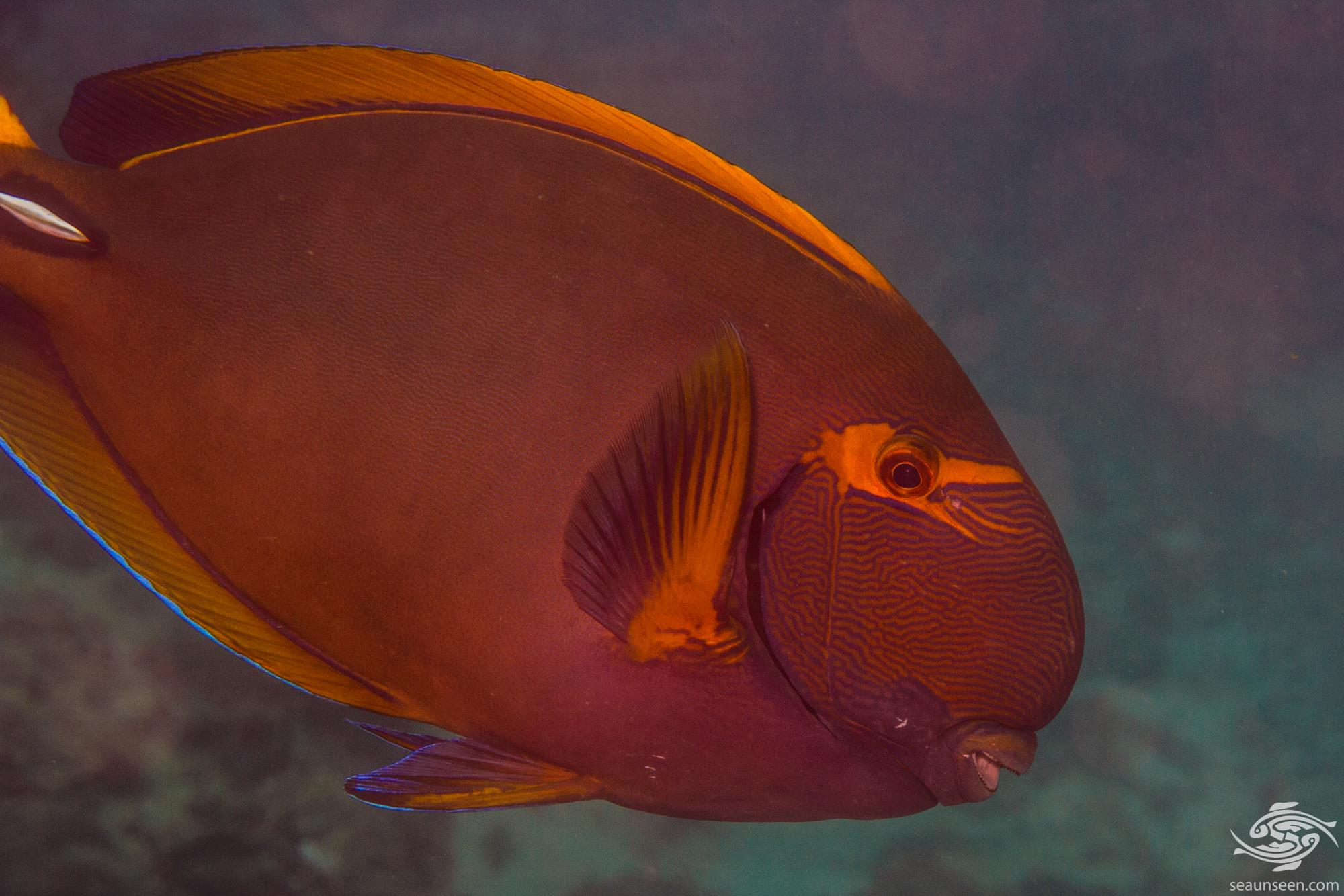 Eyestripe Surgeonfish are occasionally kept in aquariums but due to their potential size of 53 cm they are suited only to very large tanks and public aquaria.  They require high quality clean water that is well oxygenated. They are fairly easy to feed but a large part of their diet should be algae in one form or another to keep them healthy. Because of their territorial nature they should not be kept with fish with a similar shape or diet. Great care should be taken when moving them as their blades can easily snag in a net or worst case pierce a bag. There is a good article on keeping Surgeonfish here.

Eyestripe Surgeonfish are not commonly caught by fishermen in Tanzania due to their feeding habits and the improbability of taking bait. They are however netted or trapped occasionally.  In parts of the Pacific they are exploited both for the aquarium trade and as a food source. They are heavily trapped in some parts of their range.