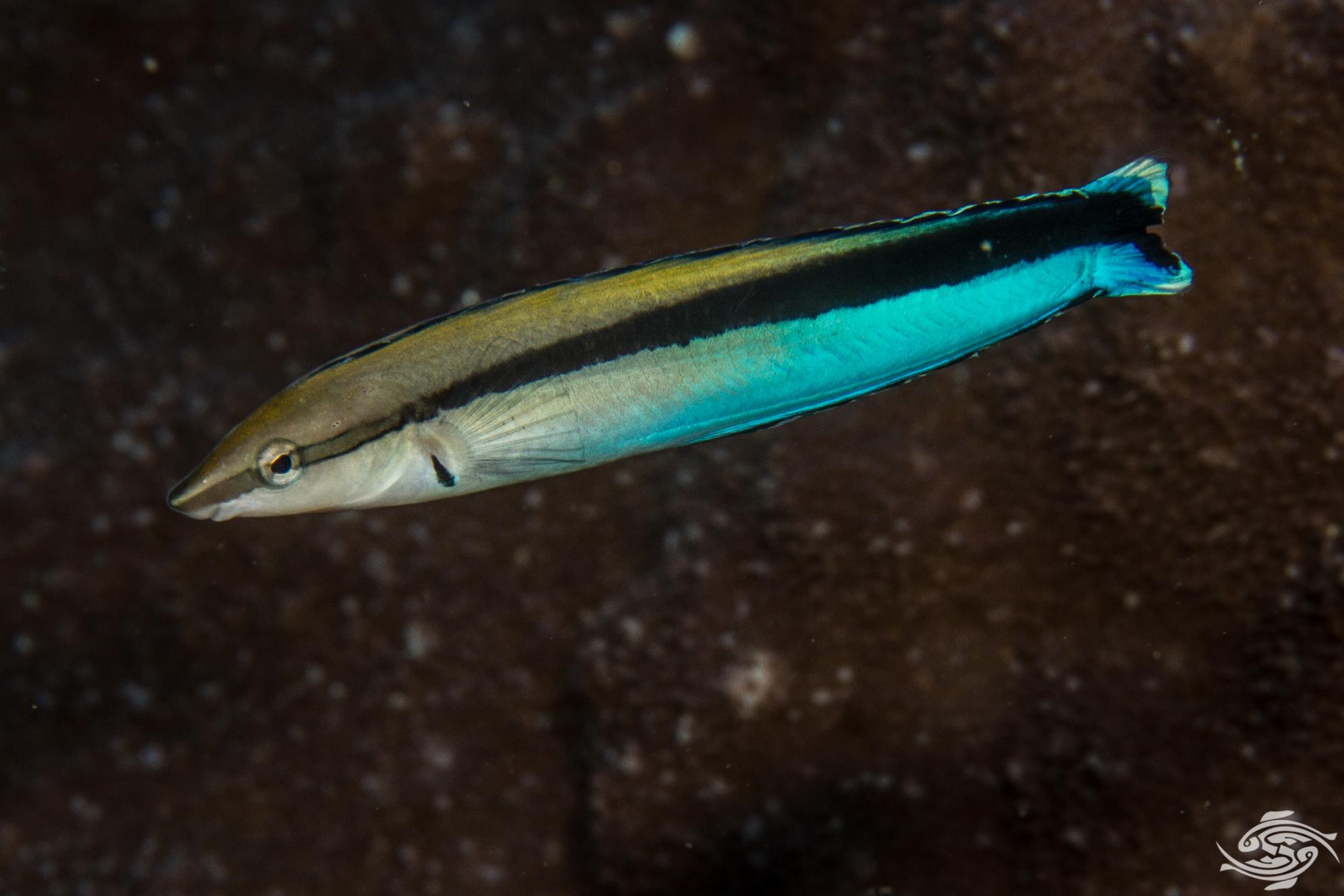 The False Cleanerfish (Aspidontus tractus) mimics the Blue Streak Cleaner Wrasse (Labroides dimidiatus)pictured below across each stage of its life. False Cleanerfish are fangblennies and the name originates from the vicious set of teeth in their lower jaw that curve down and then upwards, resembling the shape of those of the extinct Saber-toothed tiger.

They are exceptionally good mimics and many novice collectors have put them in their fish tanks with a consequent set of attacks on all the other fish in the tank. The best way of telling the difference is to look at the position of the mouth. If it is underslung on the underside of the body as seen above then it is a False Cleanerfish. As can be seen by comparing the two images, the real Blue Streak Cleaner Wrasse below has its mouth on the point of the nose. 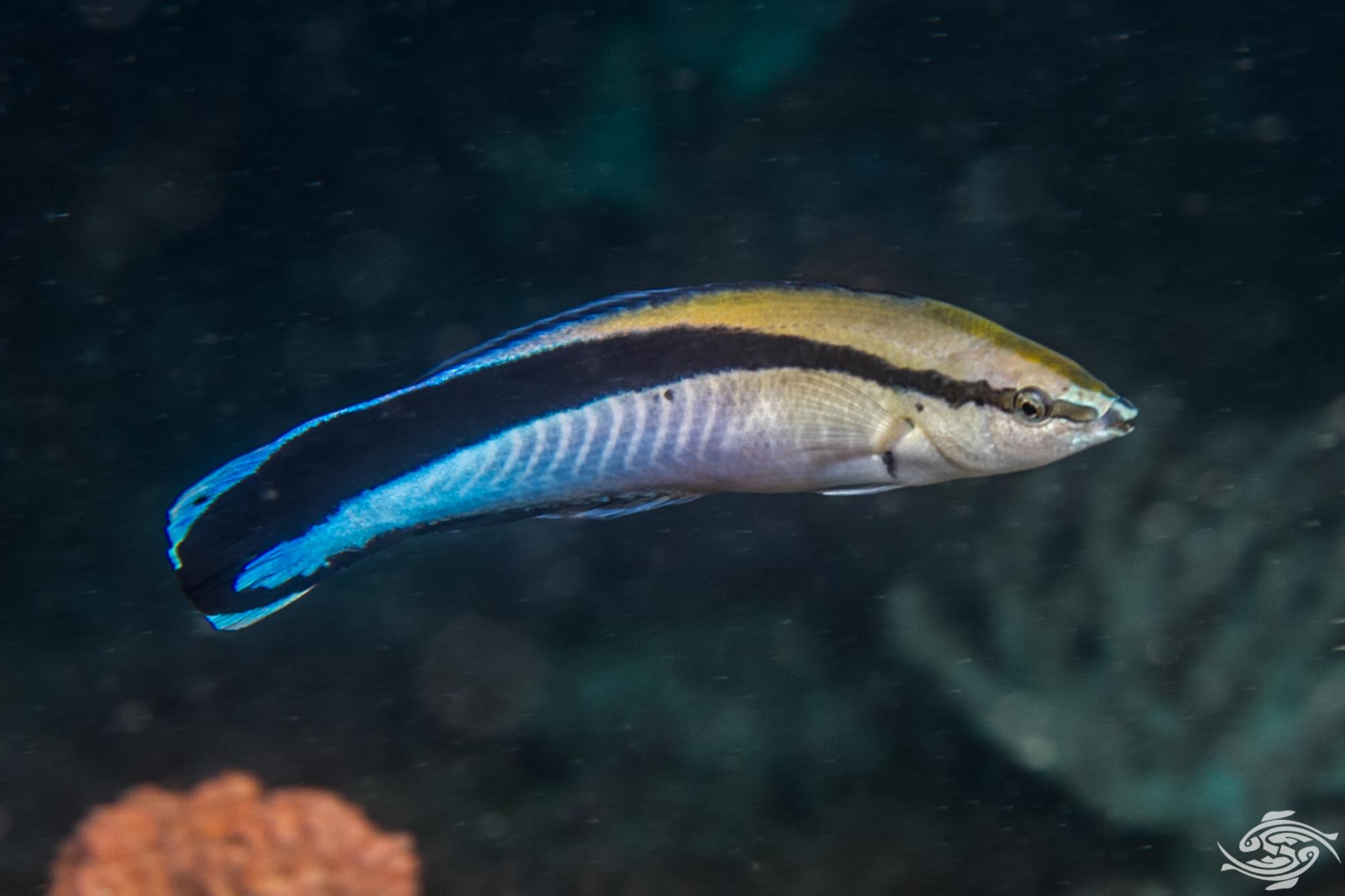 The mouth is characteristically set below the eye on the lower part of the body rather than on the front of the head as with most fish. Contained in the lower jaw but obscured by the lips is a set of curved teeth. They grow up to 10cm  in length. 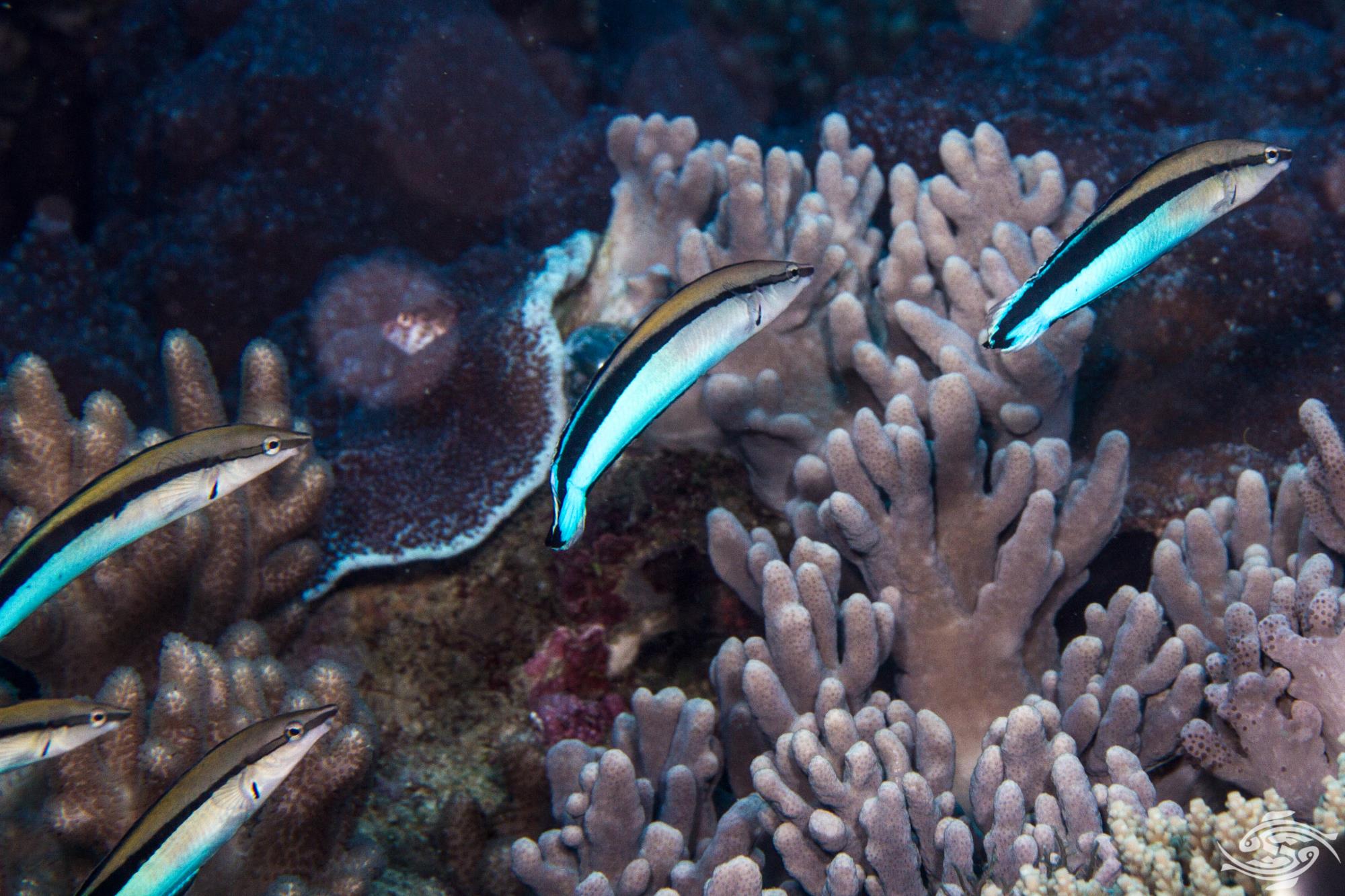 FALSE CLEANERFISH IN THE WILD

The False Cleanerfish mimics the Blue Streak Cleaner Wrasse both in physical looks and in its behavior. They perform the same dance which is used to attract client fish, dropping the tail and bobbing up and down.

Often they are seen they are milling around a meter to a meter and a half above a cleaning station usually with two adult Blue Streak cleaner wrasse on it. After sizing up a suitable unsuspecting target waiting to be cleaned they dart in and take a chunk out of it and head for cover.  They are fairly difficult to approach closely and are fast swimmers that make sharp turns at regular intervals. They seldom swim in a straight line for long.

They are usually seen in pairs but during spring in Tanzanian waters, large groups of adults sometimes form on the reef flats.These groups sometimes contain as many as 40 fish. This may be mating behavior. 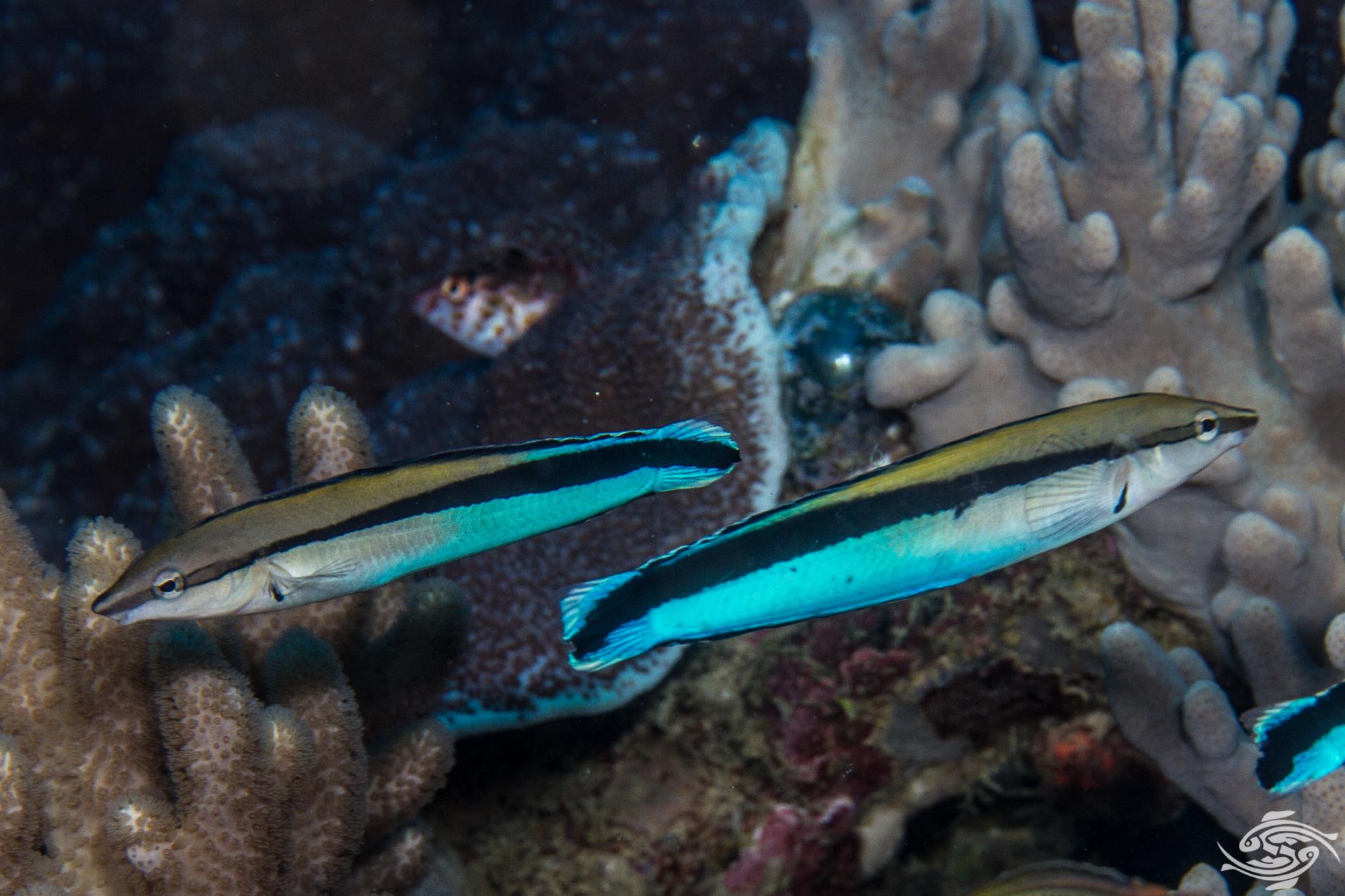 The False Cleanerfish occurs throughout the West Indian Ocean from East Africa to India and southwards from there. They are found mainly on coral or rocky reefs, always with a hiding place or hole close by. They are sometimes seen in empty tube worm holes with just the head sticking out. 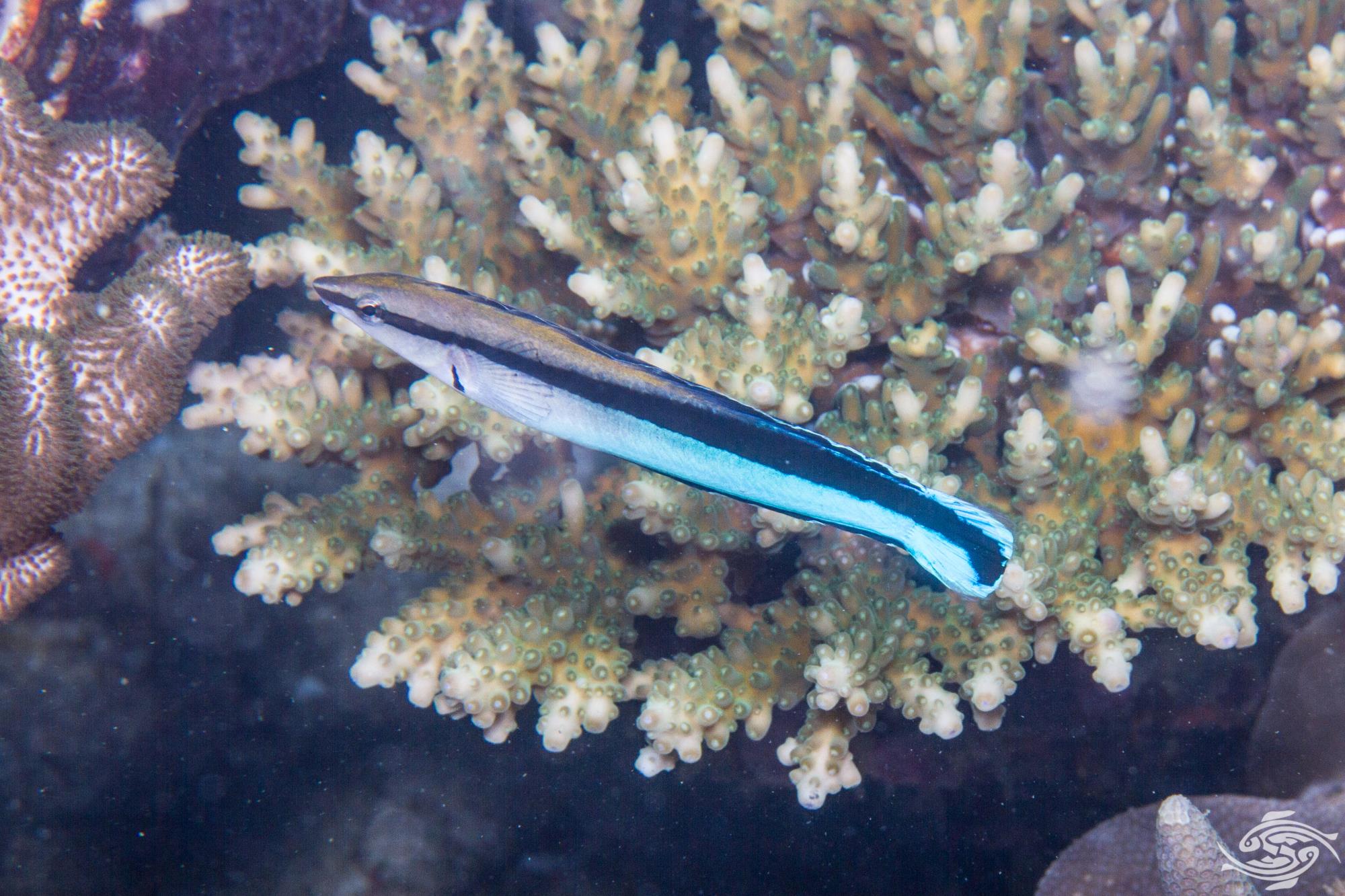 False Cleanerfish have always been thought to feed  exclusively on mucus and fish scales or fins bitten off unsuspecting prey. However recent research on A. taeniatus found that these only made up 20 % of their diet and that the majority of the stomach contents were fish eggs. What is certain though is that if one mistakenly puts one in a fish tank, they target the other fish mercilessly. 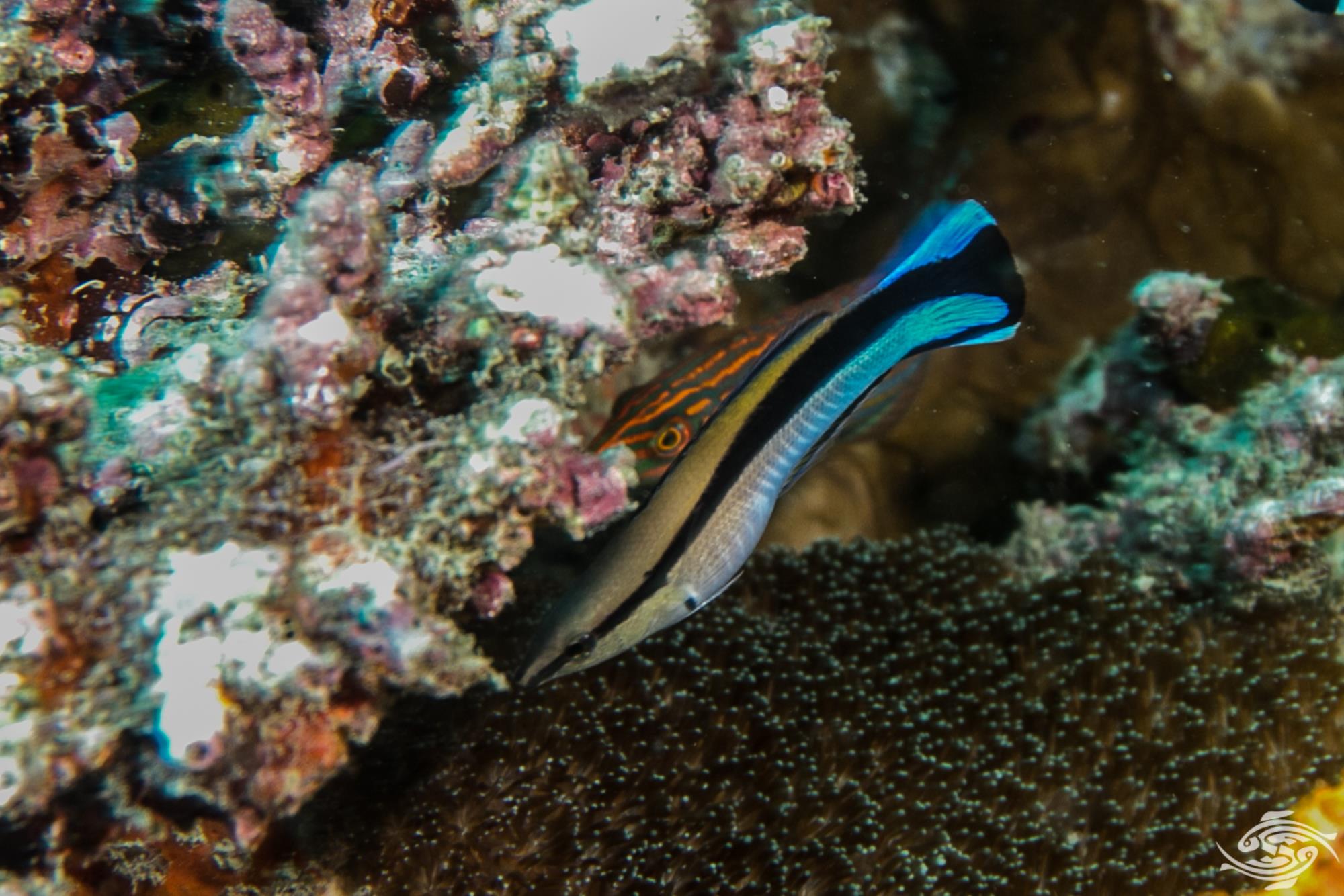 Little seems known of their reproductive habits, some blennies have been bred in captivity by ORA. Possibly the shoaling behavior with groups of up to 40 fish collecting togeher in spring is mating behavior. 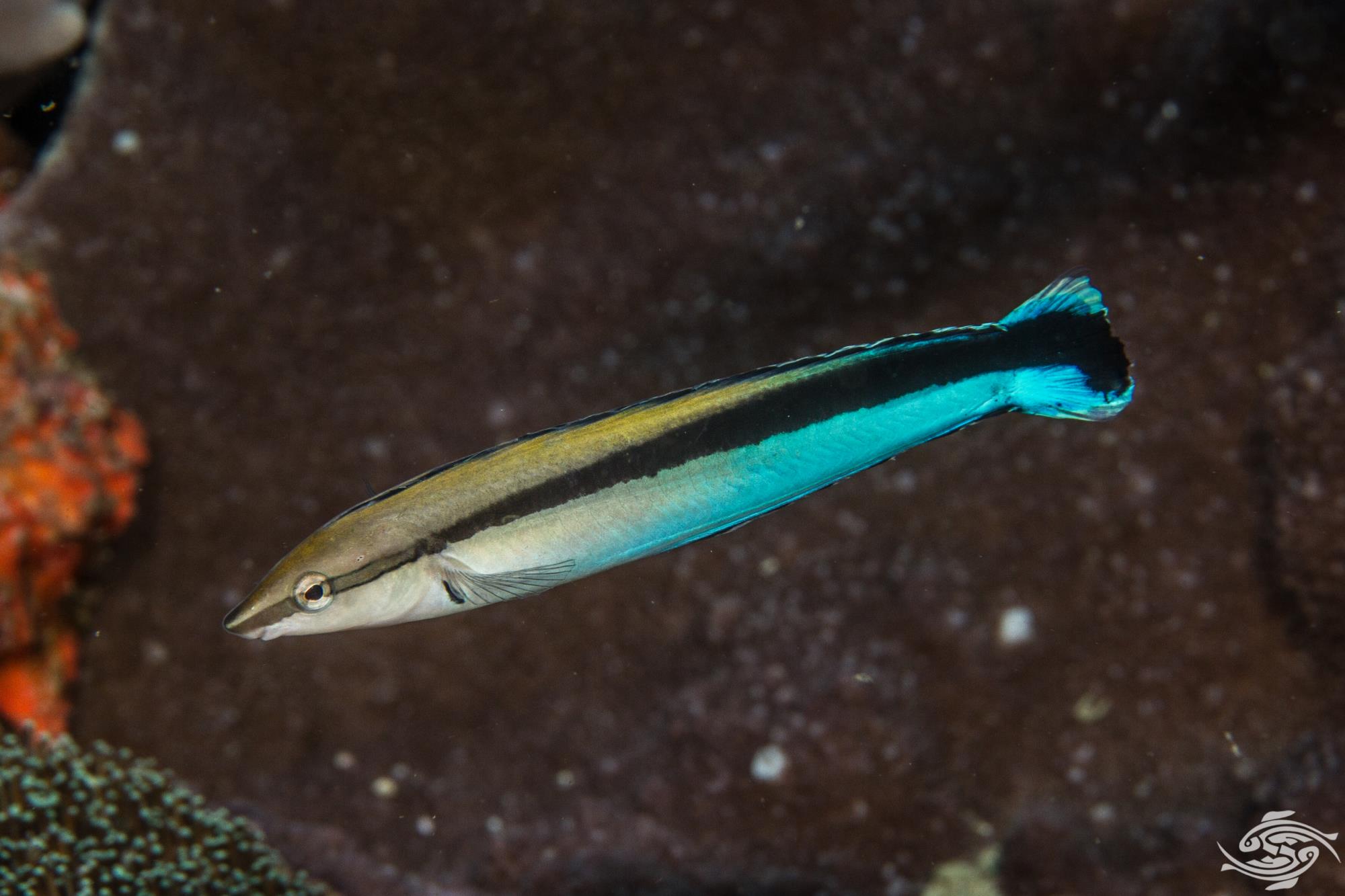 False Cleanerfish are sold in the trade occasionally but this is probably not a fish that one would want in an aquarium. In a confined area they target weaker slow moving fish and the potential for secondary infections on bite sites in an aquarium is great. 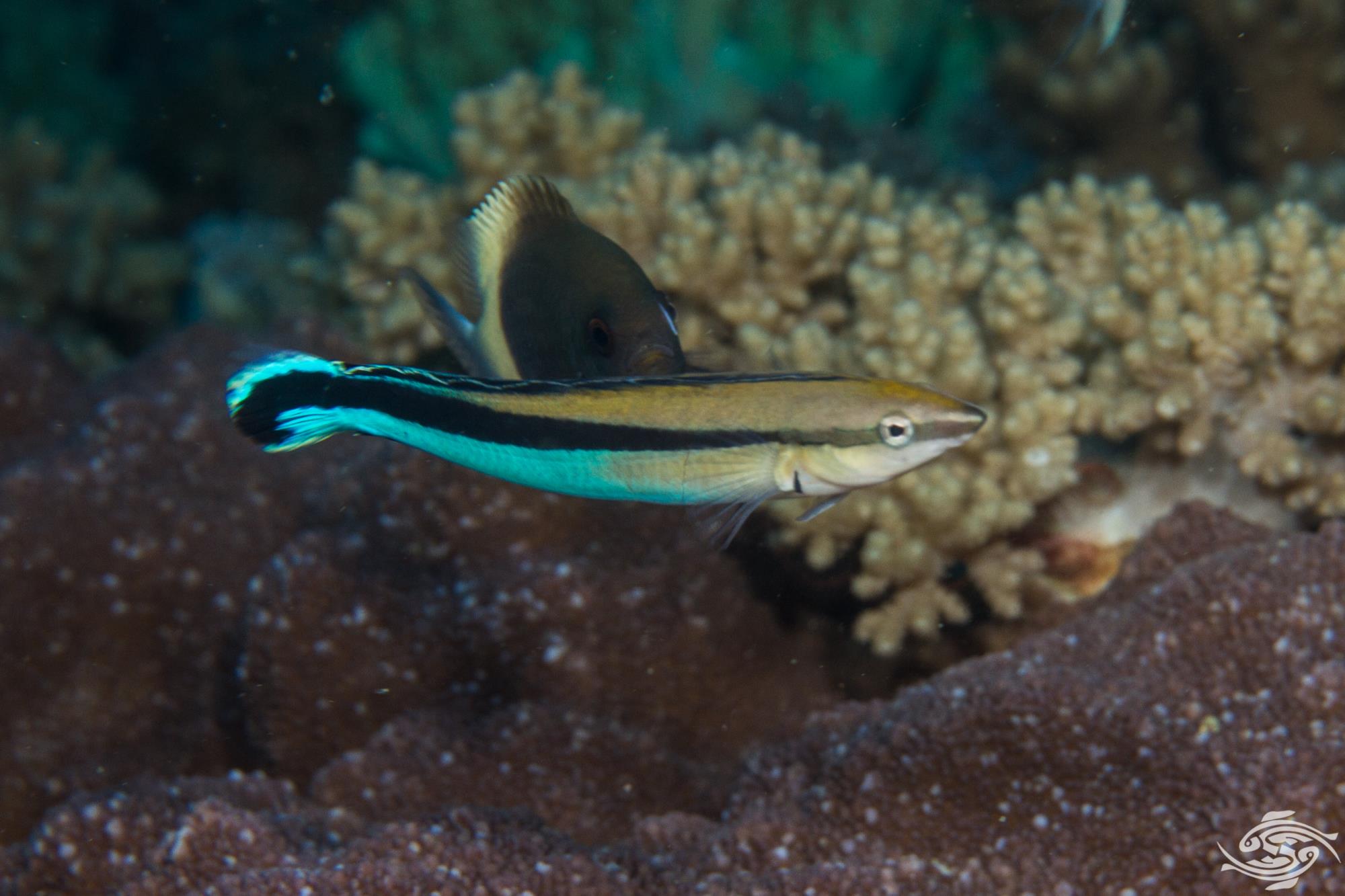