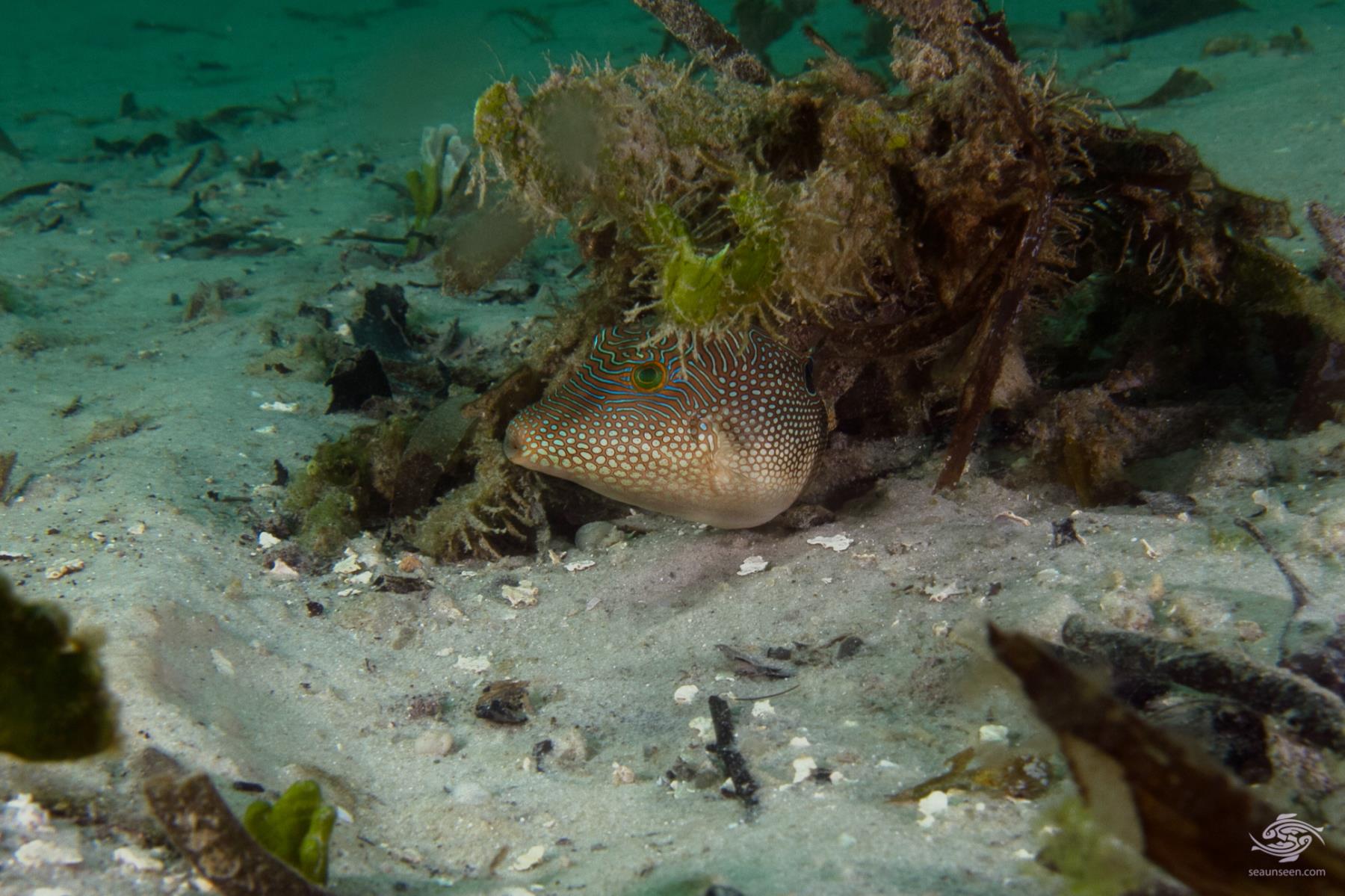 The False eye toby (Canthigaster solandri) is also known as the Ocellated toby, Blue spotted toby, Jewel pufferfish, Solanders toby  and the Spotted sharpnose puffer. They belong to the genus Canthigaster, whose members are called sharp-nosed puffers or tobies and who are much smaller than the larger puffers.

The  have the ability to take water into their stomach and blow themselves up to a larger size, hence the name pufferfish, to make it more difficult for predators to swallow them. False eye tobies are commonly seen swimming on Tanzanian reefs and as with many other puffers, they have a symbiotic relationship with types of bacteria such as Pseudoalteromonas tetraodonis, which produces tetradotoxin which is a powerful neurotoxin.  These poisons provide them with protection against predators and their bright colors act as a warning to predators. This strategy is known as Aposematism. 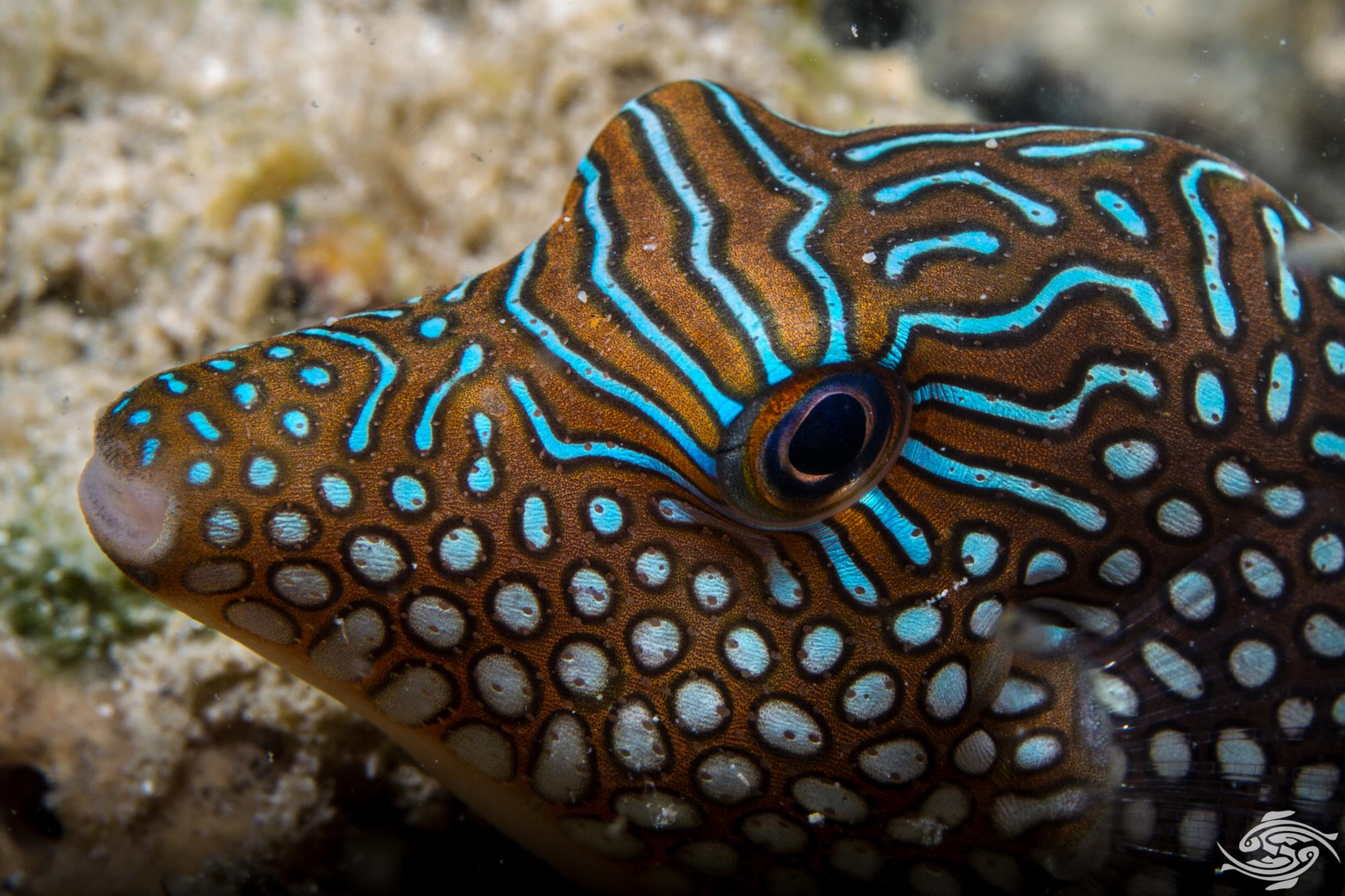 False eye tobies are attractive looking fish with a brown to orange brown body, covered with white to blue green spots with blue lines on the face. The underside is a pale whitish color. As the name suggests they have a false eye on the rear of the dorsal fin to confuse predators. In common with other members of the puffer family they have no scales and no pelvic fins. The false eye toby also differs sexually in appearance and color, males are  larger and have fewer larger spots than females. 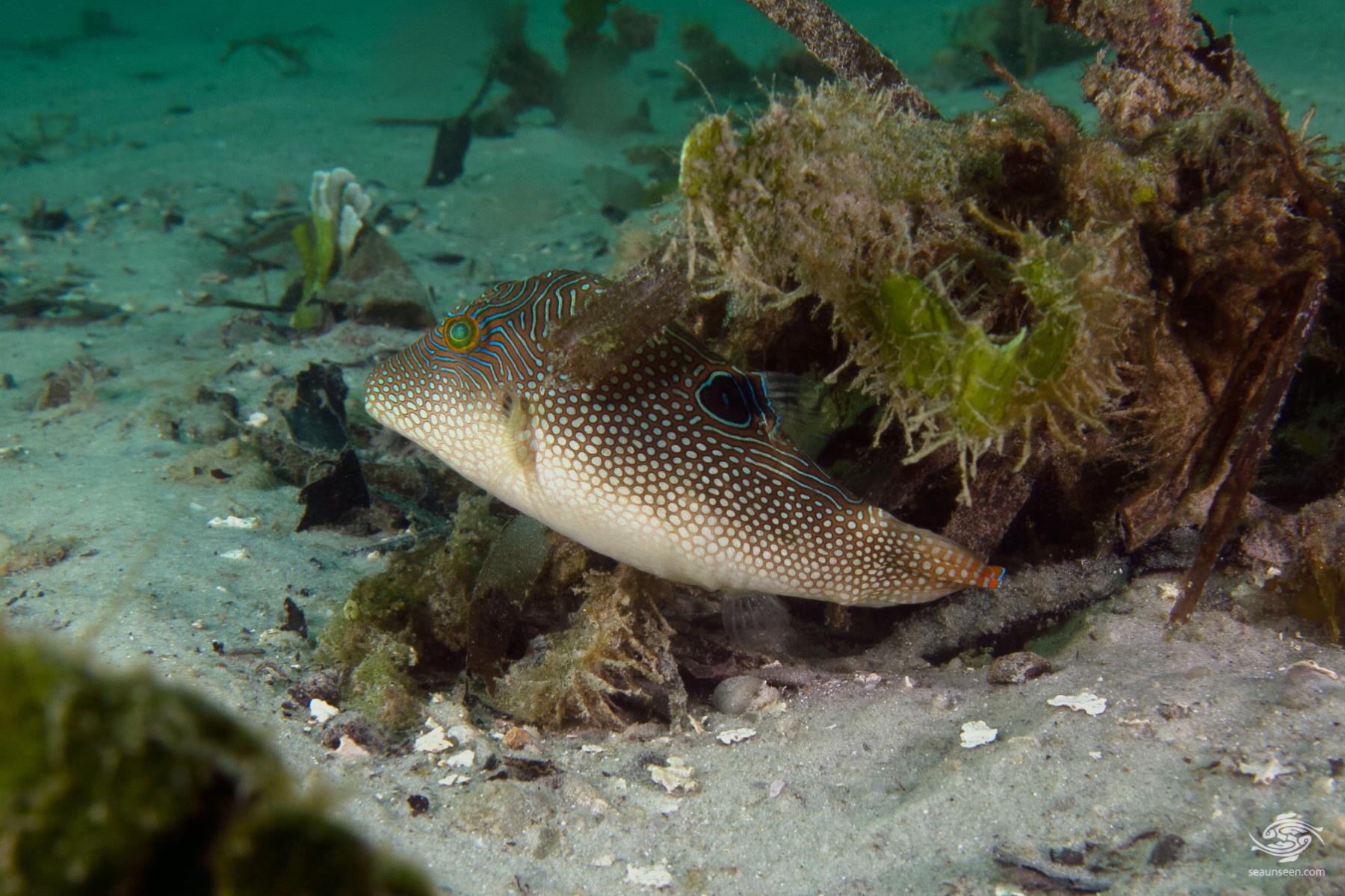 Their coloration varies slightly across their range. Species from the Pacific appear to be slightly darker in body color compared the those in the Indian ocean. There are several species that are very similar that supplant them in some areas. Canthigaster margaritata in the Red Sea is very similar as is Canthigaster papua. They have four strong teeth fused into a beak which are not unlike rat teeth in that they continue to grow and need to be continually worn down. They grow up to 10 cm in length. 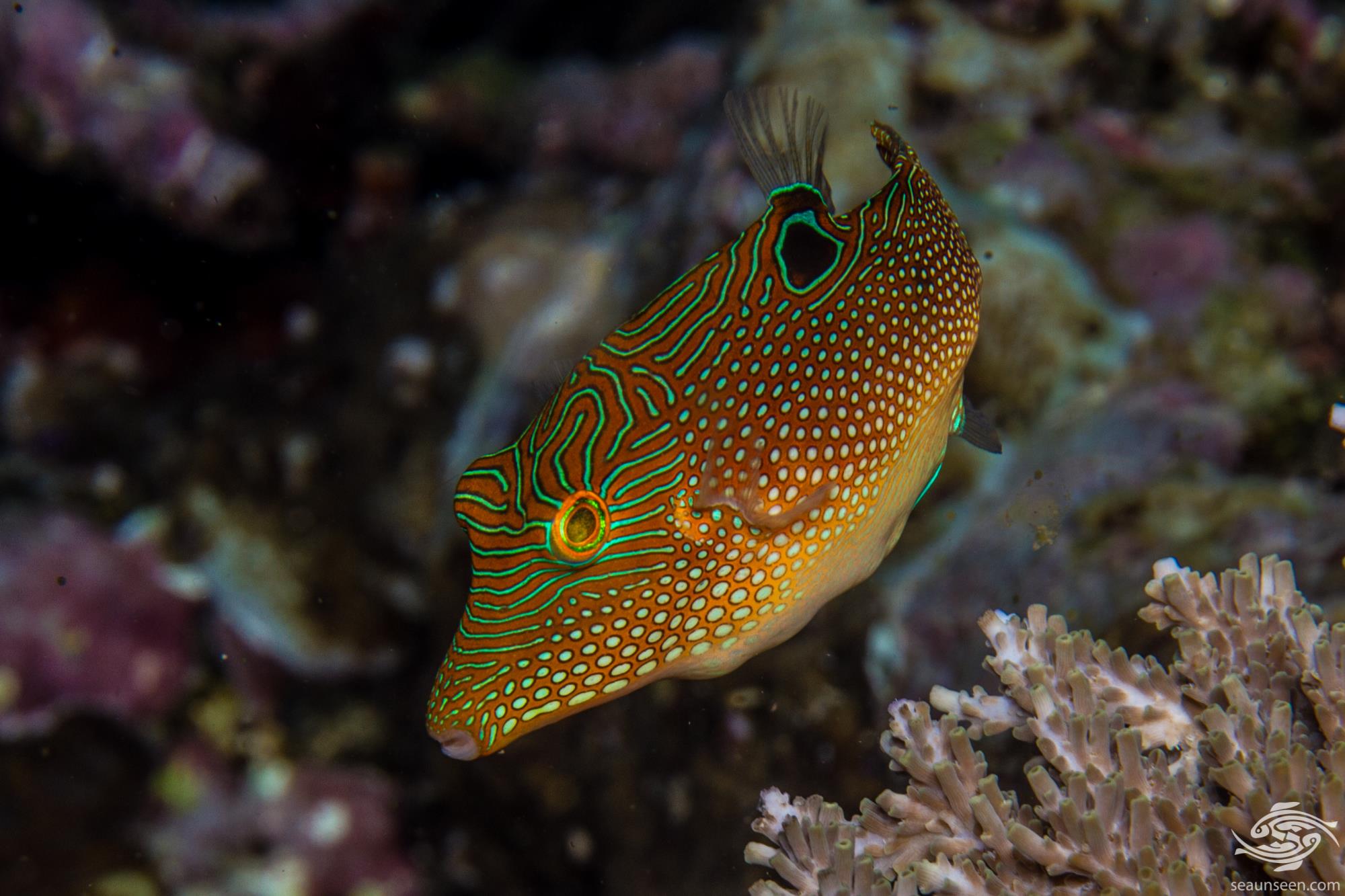 False eye tobies are hard fish to approach on a reef because they will always head into cover if a diver gets too close. They will usually head into a hole or under an overhang and then turn and peer out at one in a curious fashion. On grassy beds where they are also found they employ a completely different tactic and will curl up around a tuft of sea grass and remain motionless, only moving off into thicker cover if one gets really close. They are often seen in pairs and the male is thought to be the larger fish. They grow to a maximum of  12 cm . 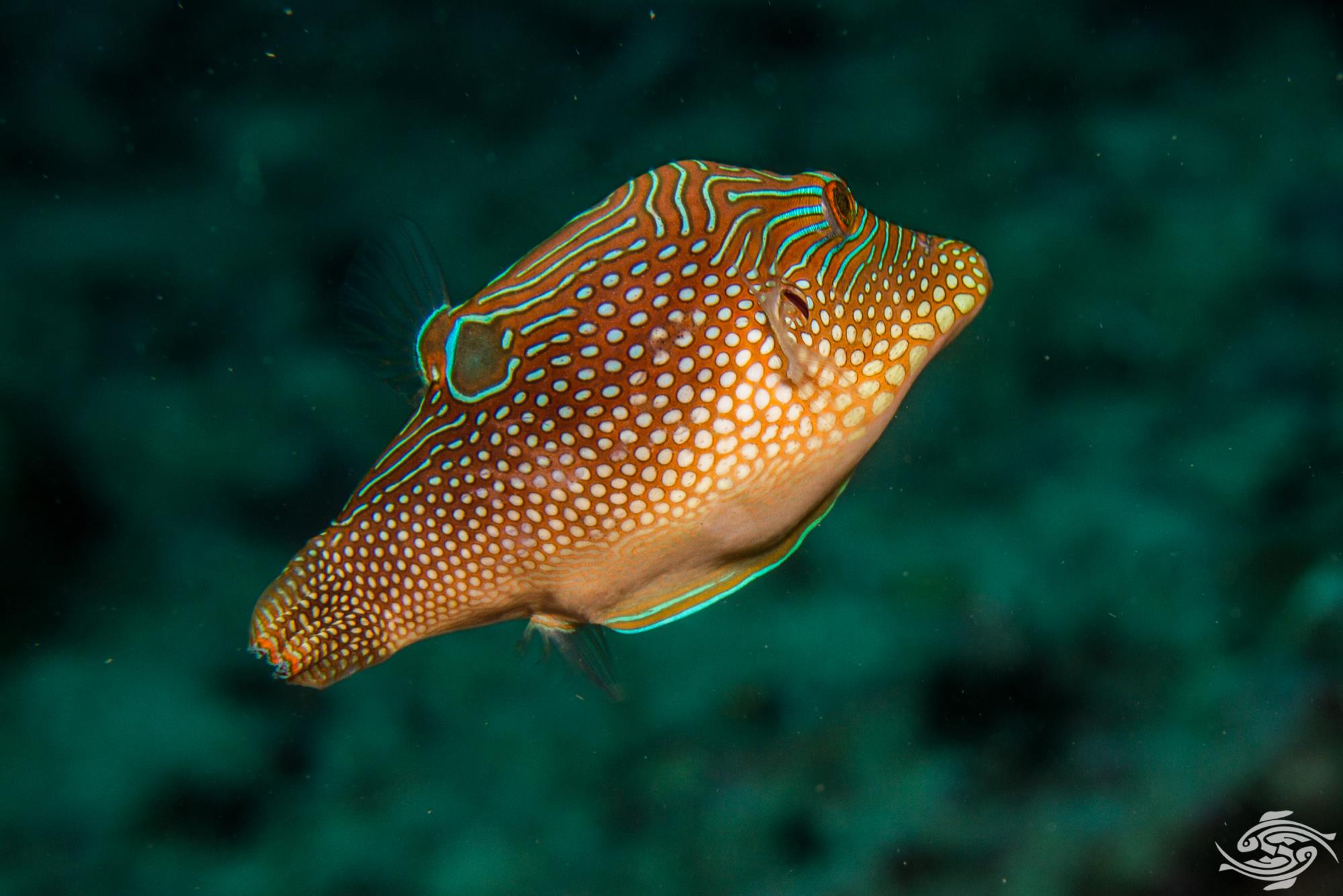 False eye tobies are found across the Indo Pacific area and they inhabit sheltered inter tidal coral and rocky reefs, seaward reefs  as well as lagoons with grass beds. 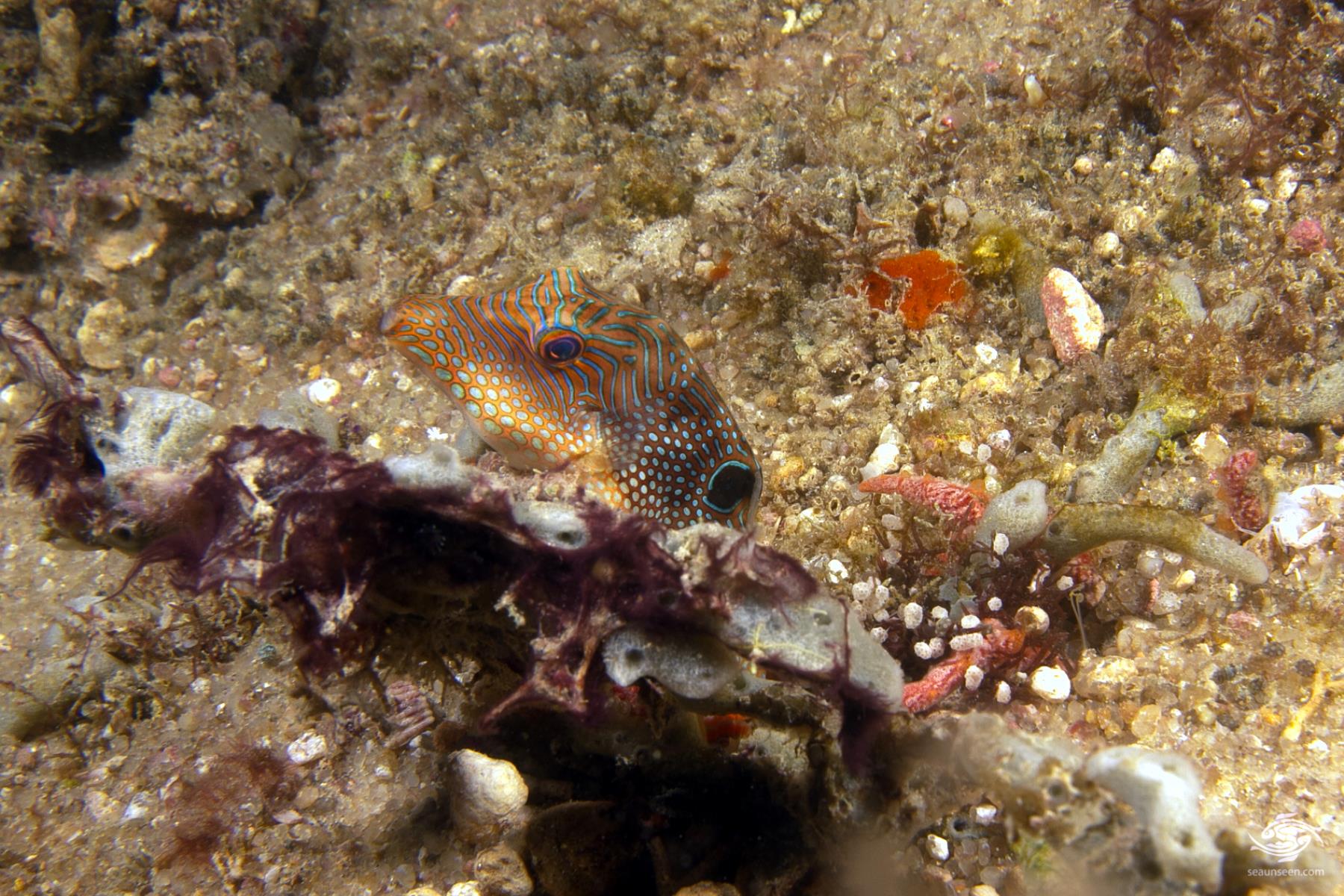 False eye tobies use their impressive looking teeth to feed on benthic invertebrates, sponges, algae’s and some corals and often chew the ends off branched corals.

Little is known of the reproductive habits of the false eye toby, however all the Canthigaster species have similar mating habits, where the female prepares a nest in algae in the substratum and lays eggs which the male then fertilizes. Spawning takes place during the day and the eggs are left to hatch. 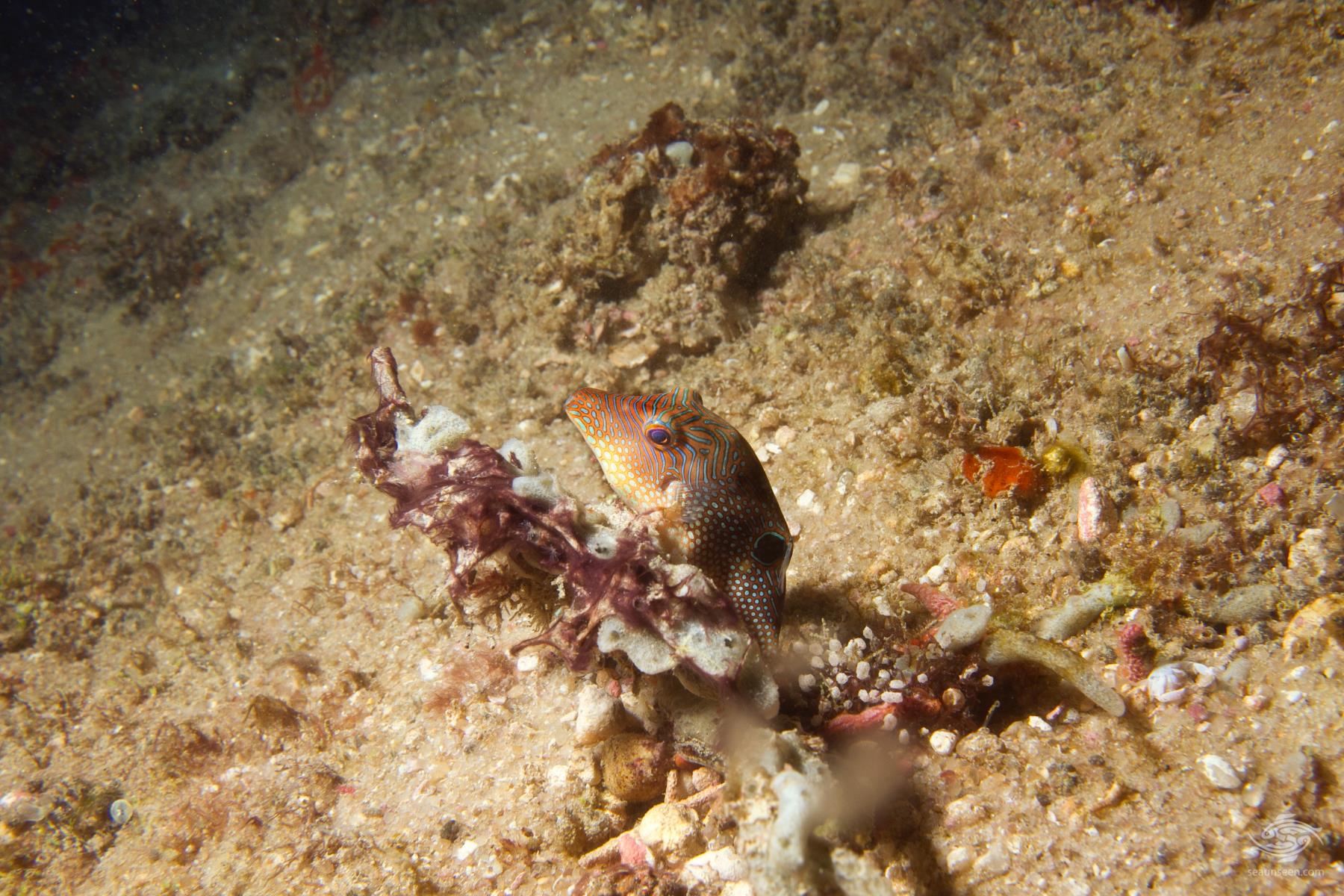 Because of their attractive coloration, cheeky character as well as their small size, false eye tobies are often kept by aquarists despite their poisonous characteristics. When stressed or dying they have the ability to give off a poisonous slime which can kill ones tank off quickly.

When a false eye toby is being transported the water in the container should never be poured directly into ones aquarium in case they have given off slime into the water and they should not be taken out the water either. They can take air into their stomachs and then battle to expel it which can be fatal. This adds up to a tricky situation when introducing one into ones tank. It is best to have a spare tank and do the transfer into the spare tank initially with the minimum amount of water used in the transfer and then transfer them by container to the main tank at a later stage.

They are easy to feed and will eat almost anything soon learning to associate your approach to the aquarium with feeding. Care has to be taken with their diet and it is best if there is algae growth in the tank for them to feed on to supplement their diet. 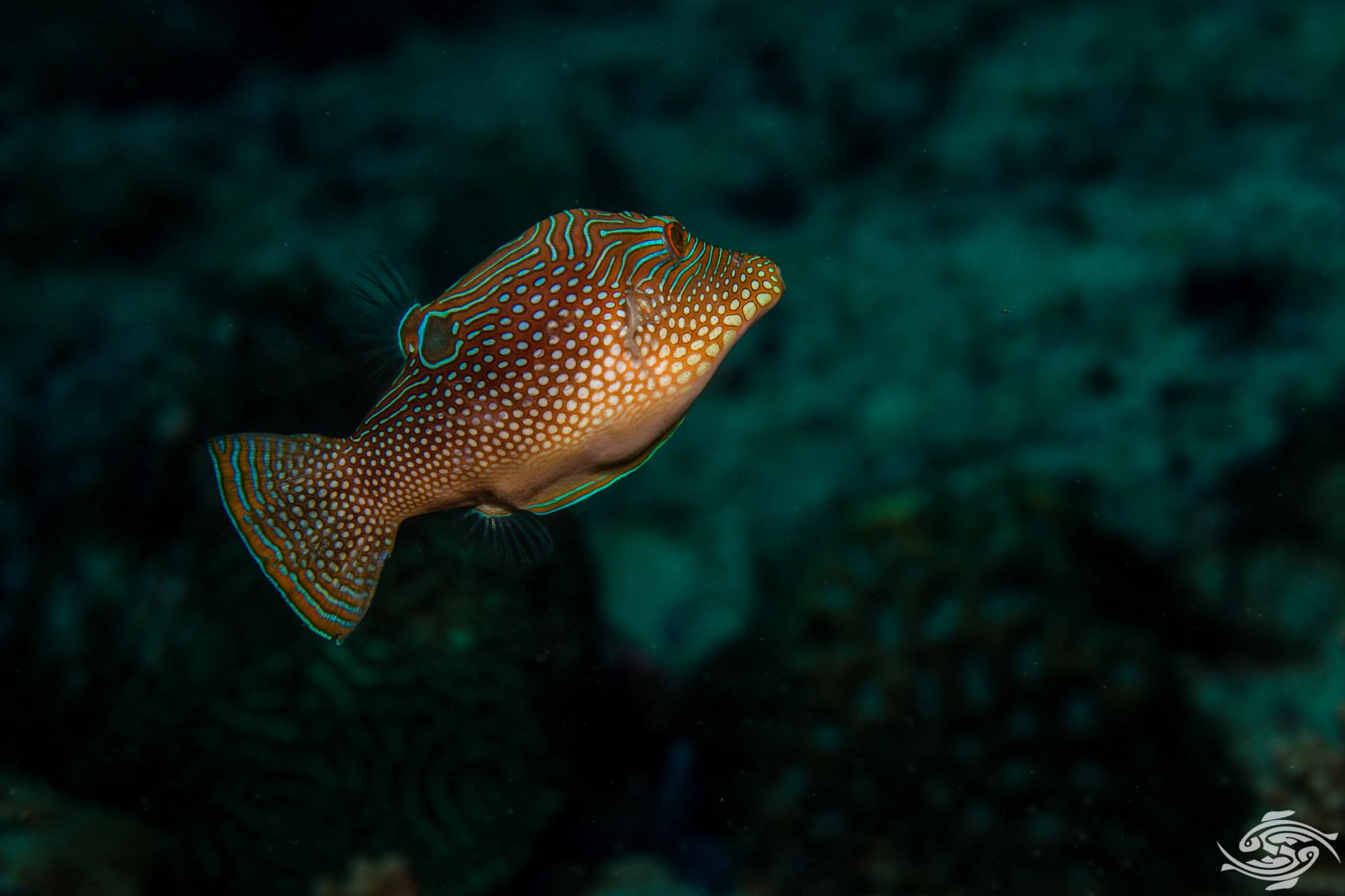 Because their teeth continue growing they need to be fed hard foods to grind their teeth down and some aquarists feed their False eye puffers live shrimp crabs and snails.  A false eye toby can nip the fins of long finned fishes and it is best not to keep them with long finned fishes such as batfish. They may nibble on some corals but many aquarists report that they are fine with most corals, much may go down to the individual fish in this regard and how well they are fed.

They are messy eaters and the tank requires good filtration. 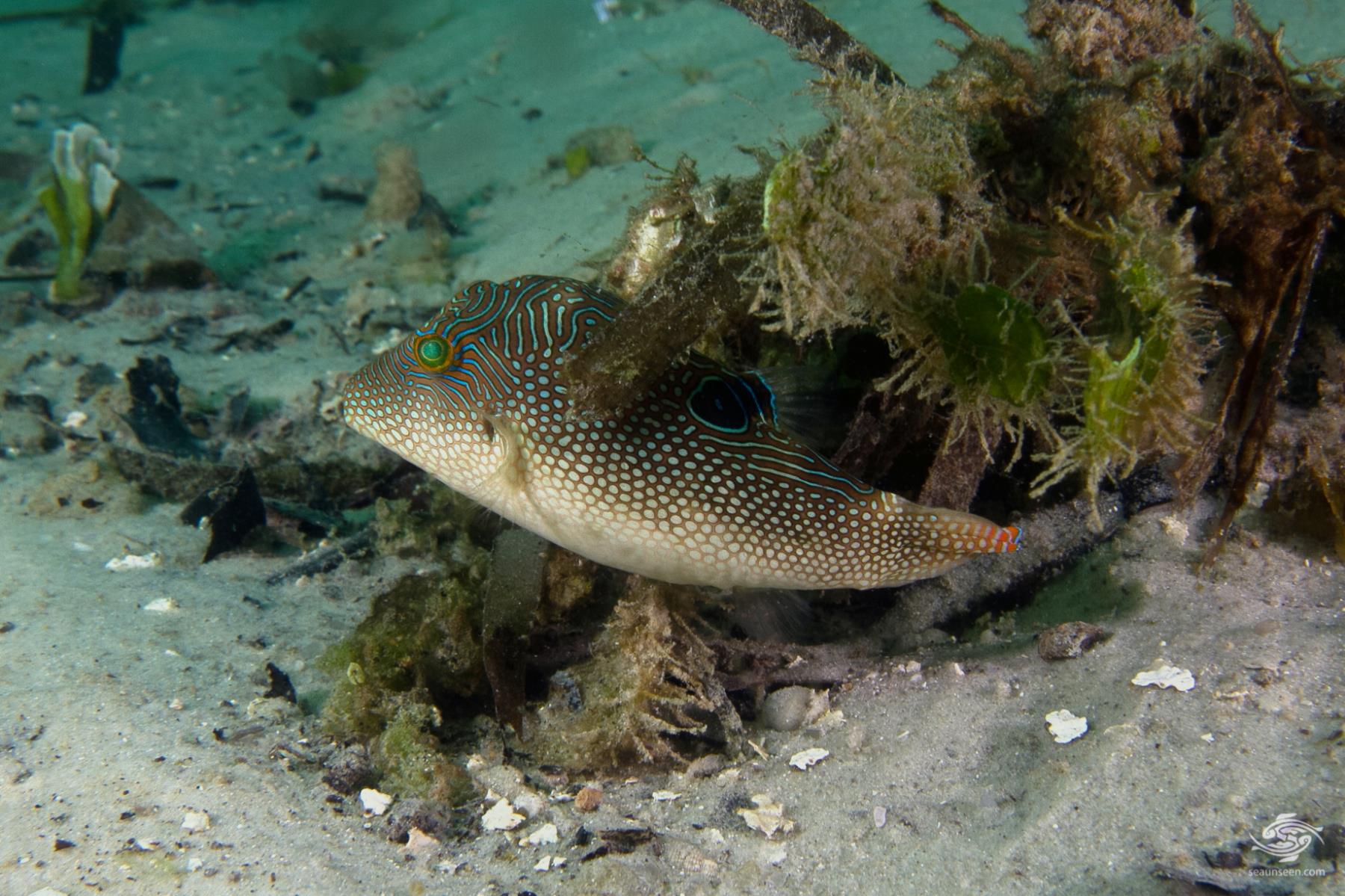