The Flat-Bodied Crab- Facts and Photographs 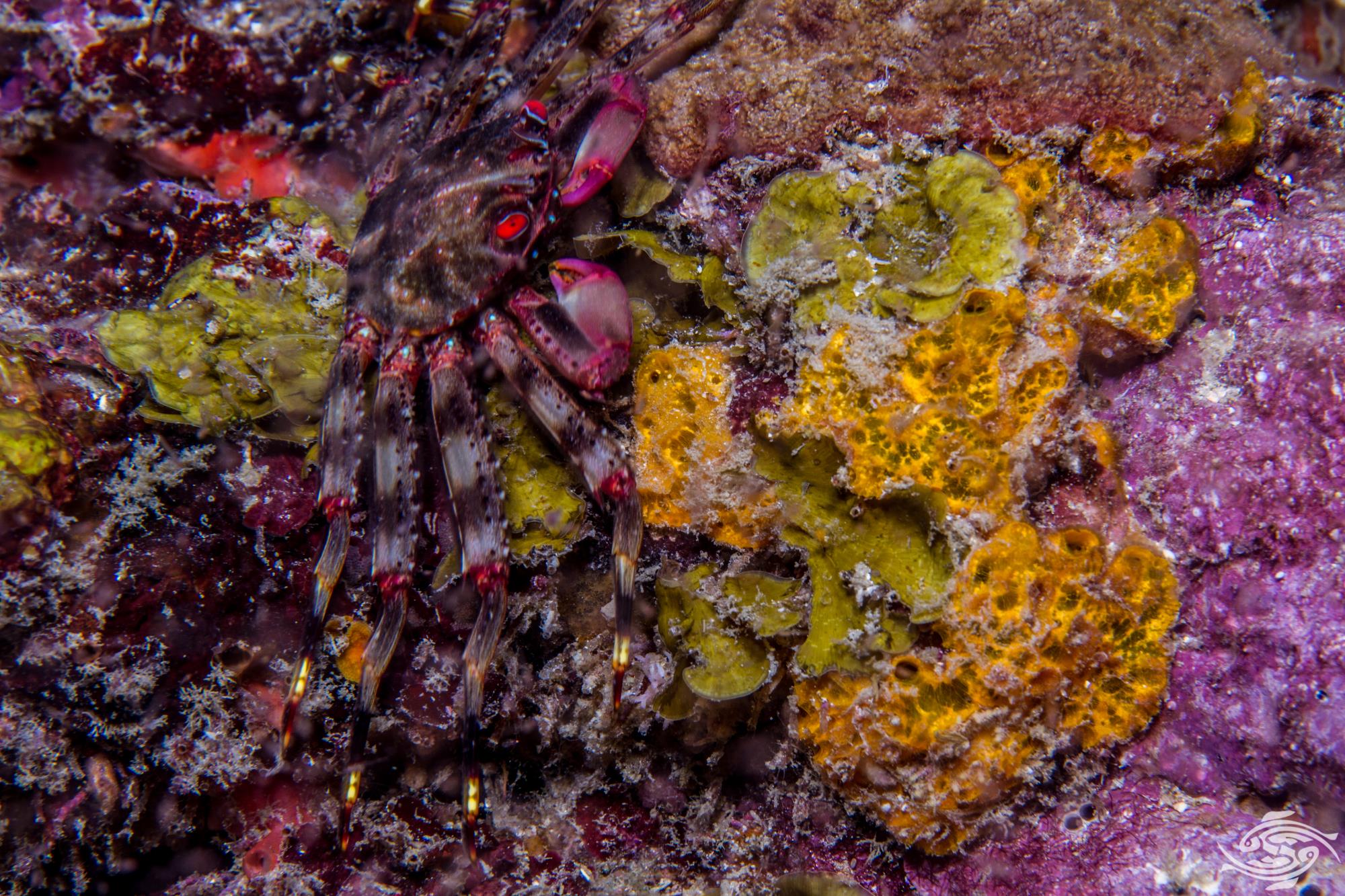 The Flat-bodied Crab (Percnon planissimum) is also known as the Flat Rock Crab and the Sally Lightfoot Crab and the Nimble Spray Crab. They are common inhabitants of the shallows on the East African coast and were first described in 1804 by Herbst in the East Indies. They fall in the Infraorder Brachyura and are considered true crabs. They are similar in looks to the Natal Lightfoot Crab (Grapsus grapsus tenulcrustatus).

The Flat-bodied Crab have a short abdomen, 4 walking legs and a pair of clawed arms at the front. The body is flat and the legs are proportionately long. They grow up to 6 cm in carapace width and there are two notches on the front of the carapace with three horns on either side. The basic colour is a mottled brown and the nippers are a purple colour.

The eyes are usually red. The male has larger nippers than the female. At night under lights they have blue spots below the carapace and the upper body also looks light blue in patches. The end segments of the legs are usually an orange-yellow colour and these have sharp points on them allowing them to firmly grip the substrate. 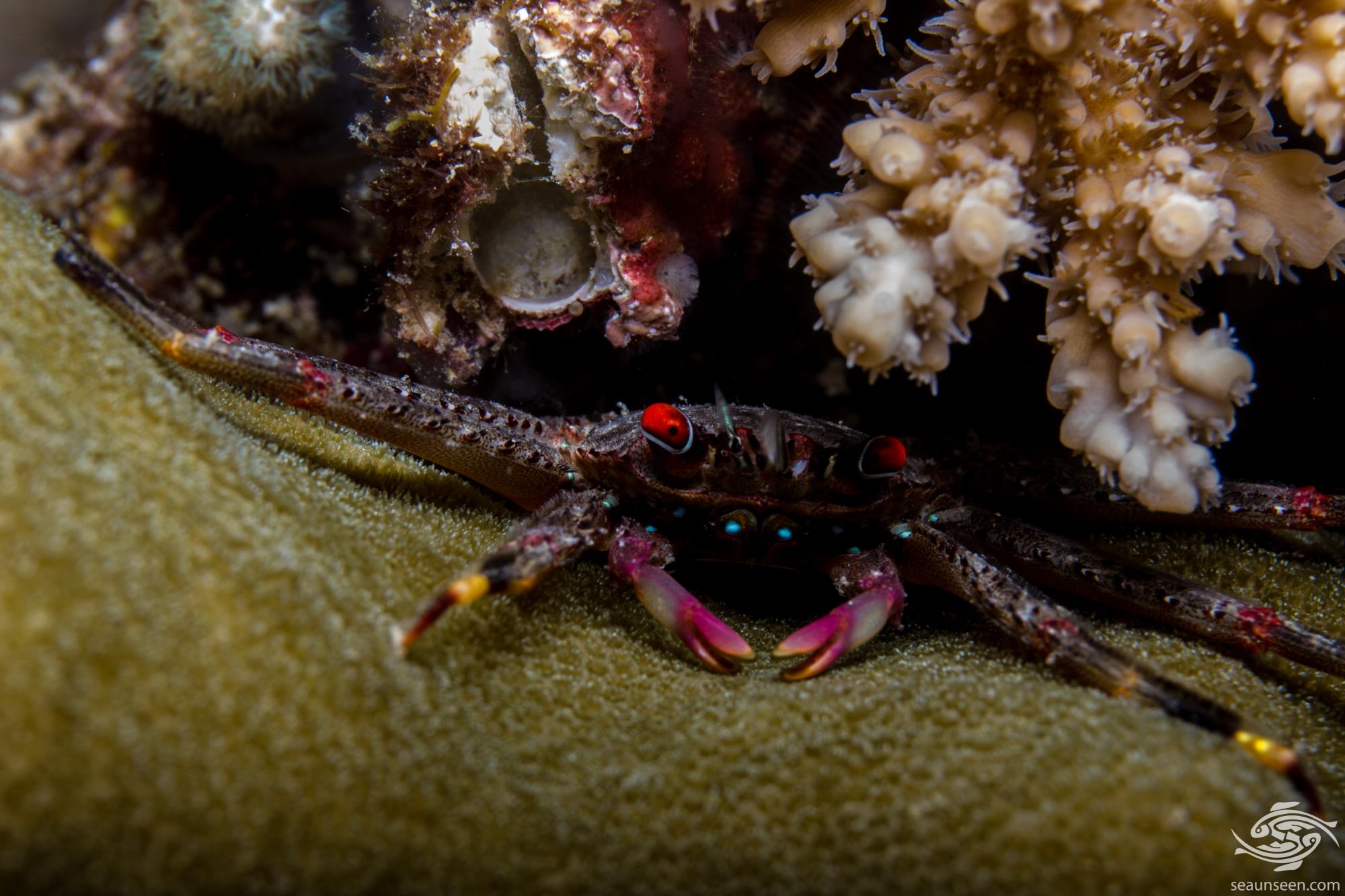 Flat-bodied Crab’s are very common on the East African coast up to a depth of approximately 12 meters. They are sometimes seen in the shallows in rock pools but if one really wishes to see them in numbers then one should dive at night. At night they seem more confident and can be seen in large numbers on the shallow reefs. Usually they are close to a crevice but occasionally they are out in the open. Being quite shy they usually scuttle back into a crevice. They are fast moving both underwater and out the water and are very sure on their feet. They are quite difficult to photograph well. 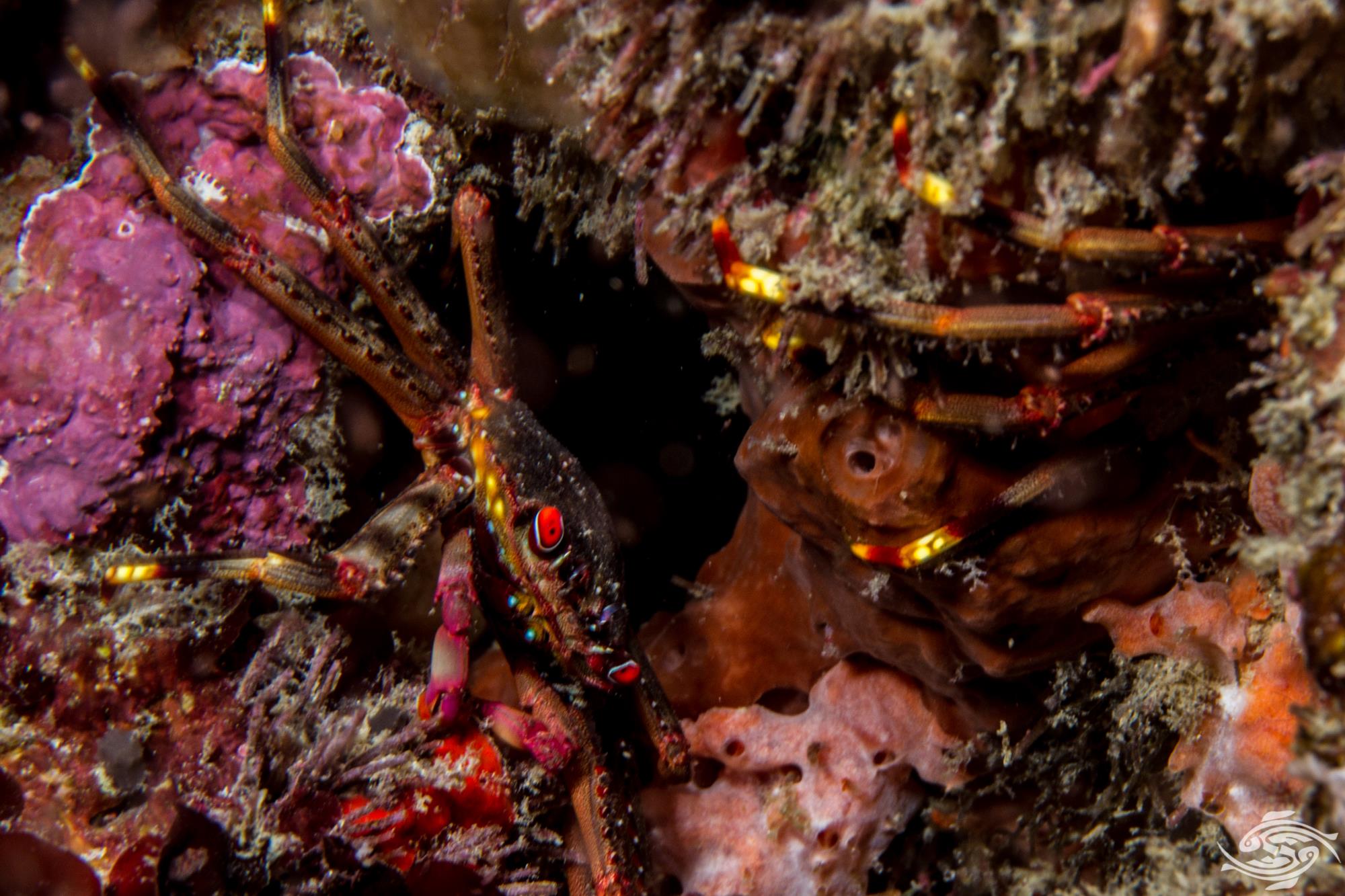 Flat-bodied Crab’s are found world-wide in tropical-temperate waters from depths of 1 to 16 meters.

Flat-bodied Crab’s are known to feed on algae, mollusks small fish and carrion in the wild. 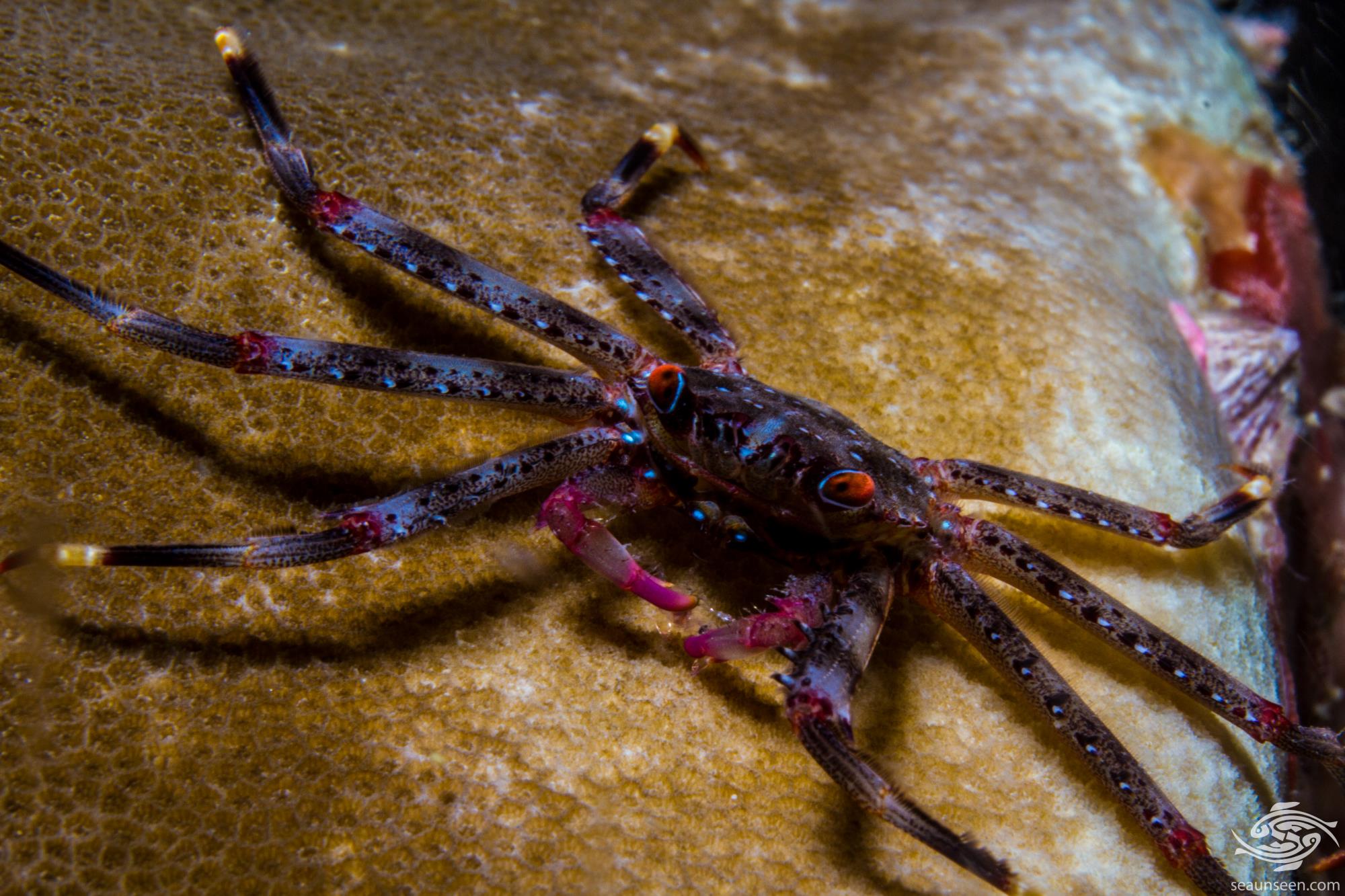 As with most crustaceans, the eggs are fertilized by the male and are carried under the body of the female. Once they hatch the larvae go through a planktonic stage before settling down and growing into their adult form. 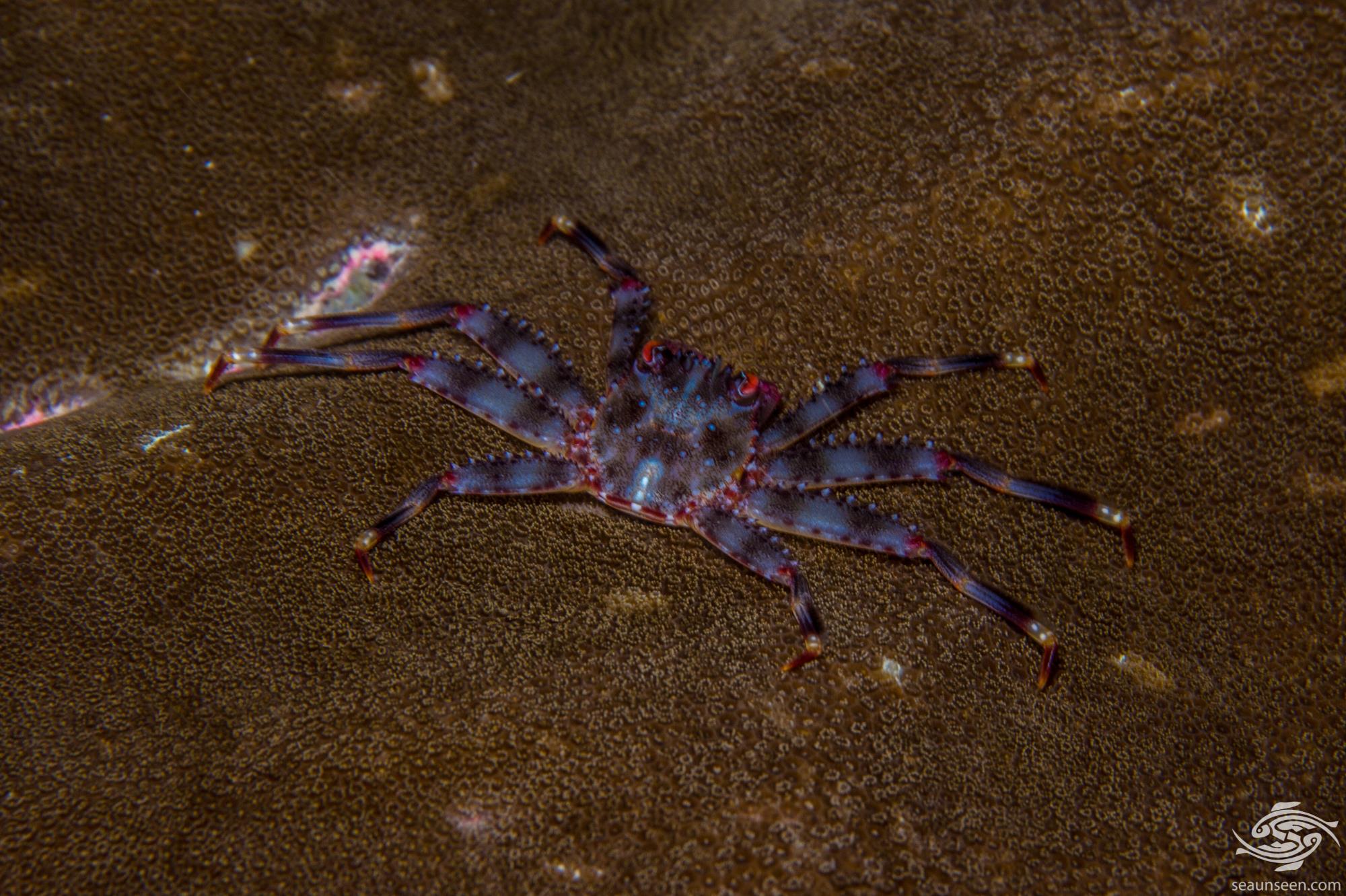 Flat-bodied Crab’s are kept in aquariums but one has to take great care in choosing their tank mates as they will prey on small fish and possibly even larger shrimp particularly when the shrimp are changing shells and are vulnerable.